AleaSoft, May 13, 2019. AleaSoft analyses prices in the fuels markets, CO2 emission rights and European electricity markets, in addition to production with renewable energies in the second week of May. In this second week of May, the wind energy production caused the electricity markets hourly prices in central Europe to collapse for a few hours, although daily average prices remained afloat above zero €/MWh.

The Brent oil futures prices for July 2019 in the ICE market continued the downward trend, settling on Friday 10 at 70.62 $/bbl, somewhat lower than at the end of the previous week. The highlight of last week is that for the first time since April 5, the price was below 70 $/bbl, down to 69.88 $/bbl when settled on Tuesday, May 7.

In a normal situation, it could be said that 70 $/bbl is a point of stability and that this price could be maintained in the short term, but the pre-war situation that caused Iran to threaten with abandon part of its commitments with respect to its nuclear program presages rises in the Brent oil price, since 30% of the world´s oil production passes through the Strait of Hormuz. On the other hand, the situation in Venezuela seems that can only get worse in the short term. OPEC must maintain its commitment to cover oil demand so that the price does not rise. 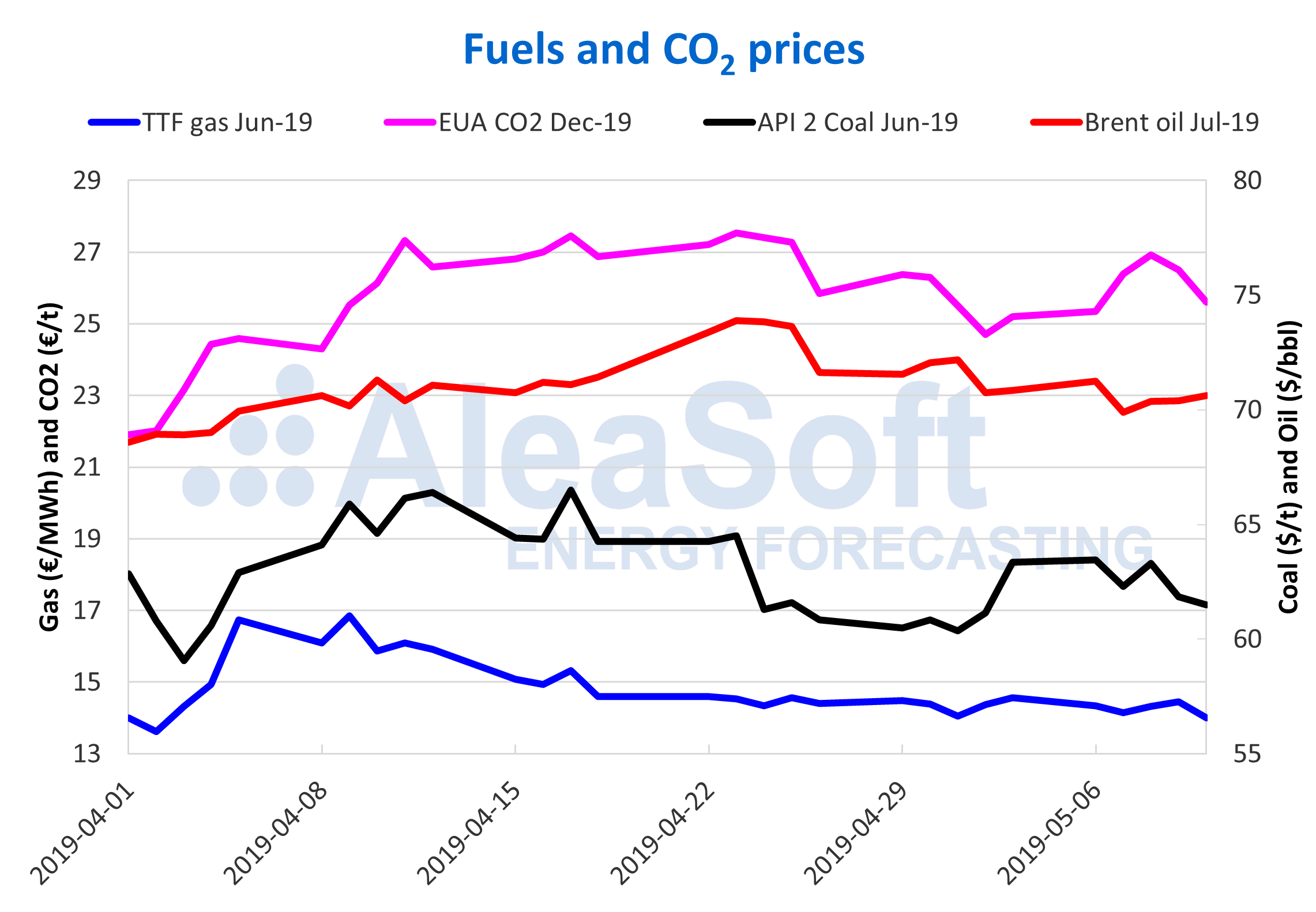 Since April 1, prices in Europe have had certain stability. The rise in the CO2 emission price was offset by lower gas and coal prices and also by the slight decrease in electricity demand due to the better weather conditions in spring, with somewhat higher temperatures and more hours of sunshine in this 40-day period. The price fluctuations in this period are mainly due to variations in wind energy production, especially in Germany and Spain, which are the European leaders generating energy with this technology. In the case of Germany, prices could have been stable at 40 €/MWh but when there was a lot of wind they fell below this value, even reaching negative values on April 22 at ‑14 €/MWh. In the Spanish electricity market, fluctuations in wind energy production caused prices in the band between 40 €/MWh and 60 €/MWh. Also in this period of 40 days there were fluctuations in temperature and in solar energy production.

In the second week of this month of May, compared to the previous week in which Wednesday, May 1st was included and being a national holiday in most countries, prices rose due to the increase in electricity demand, except in Spain and Portugal, where prices fell as a result of higher wind energy production.

In the group of markets with higher prices, in the second week of May, the N2EX market of Great Britain, the Italian market IPEX and the MIBEL market of Spain and Portugal continue to be present. During the week they had average prices of 50 €/MWh as in the previous week.

In the group with the lowest market prices of the week there are the Nord Pool market and the EPEX SPOT market of Belgium, the Netherlands, France and Germany with a weekly average price of 41.34 €/MWh. Among these markets, Germany, France and Belgium registered negative prices during some hours on Sunday, May 12, but without registering an average daily price below zero. The lowest prices were during the 16th hour with Germany as the leader at ‑22.96 €/MWh, followed by France at ‑12.27 €/MWh and Belgium at ‑8.39 €/MWh. Other connected markets were also dragged down to negative prices in some hours: Denmark, Austria and Switzerland.

The prices of European electricity futures for the third quarter of 2019 increased in most markets between 0.3% and 1.6% on Friday, May 10, compared to Friday of previous week. In the case of the OMIP market of Spain and Portugal, as well as the MTE market operated by GME, they remain unchanged, while the UK futures decreased in both the ICE and EEX markets.

In the case of futures for 2020, the increase was more widespread between 0.5% and 1.4%. Only the MTE market operated by GME remained unchanged and the UK’s ICE and EEX markets declined, as did the future for the third quarter of this year.

In the second week of May, the wind energy production had an increase in the main European markets except in Germany with a drop of 3.3%. The increase in France was 58%, in Portugal 99%, in Spain 36%, and in Italy 37%.

For the current week, the third of May, a decline in wind energy production is forecasted after the rise of the previous week. The most pronounced fall is expected in Italy and Portugal, somewhat less in Spain and France, and even a slight increase in Germany. 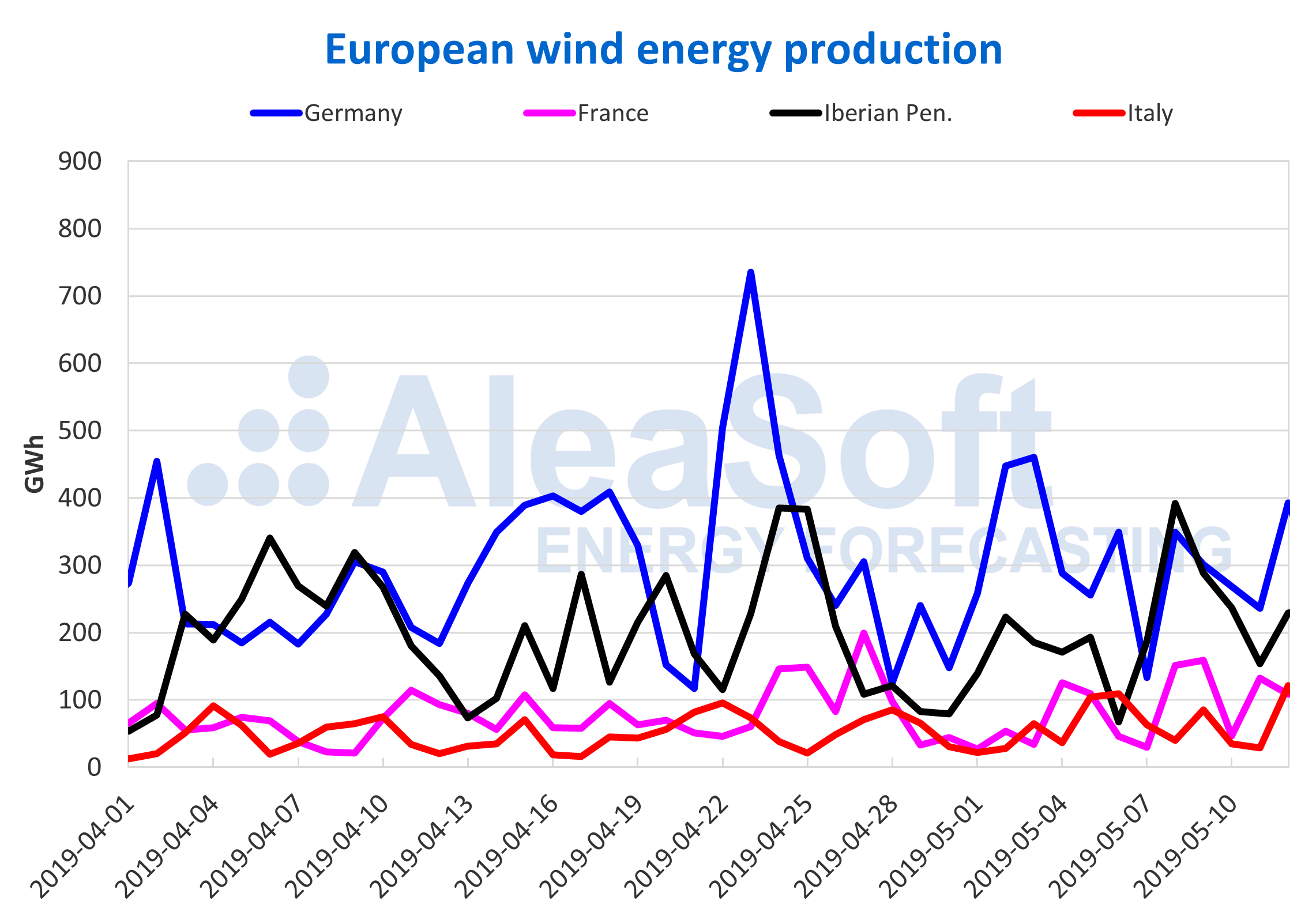 For the current week it is expected a decrease in solar energy production in Italy of about 20%, while in Germany and Spain the trend is expected to be bullish between 15% and 20%. 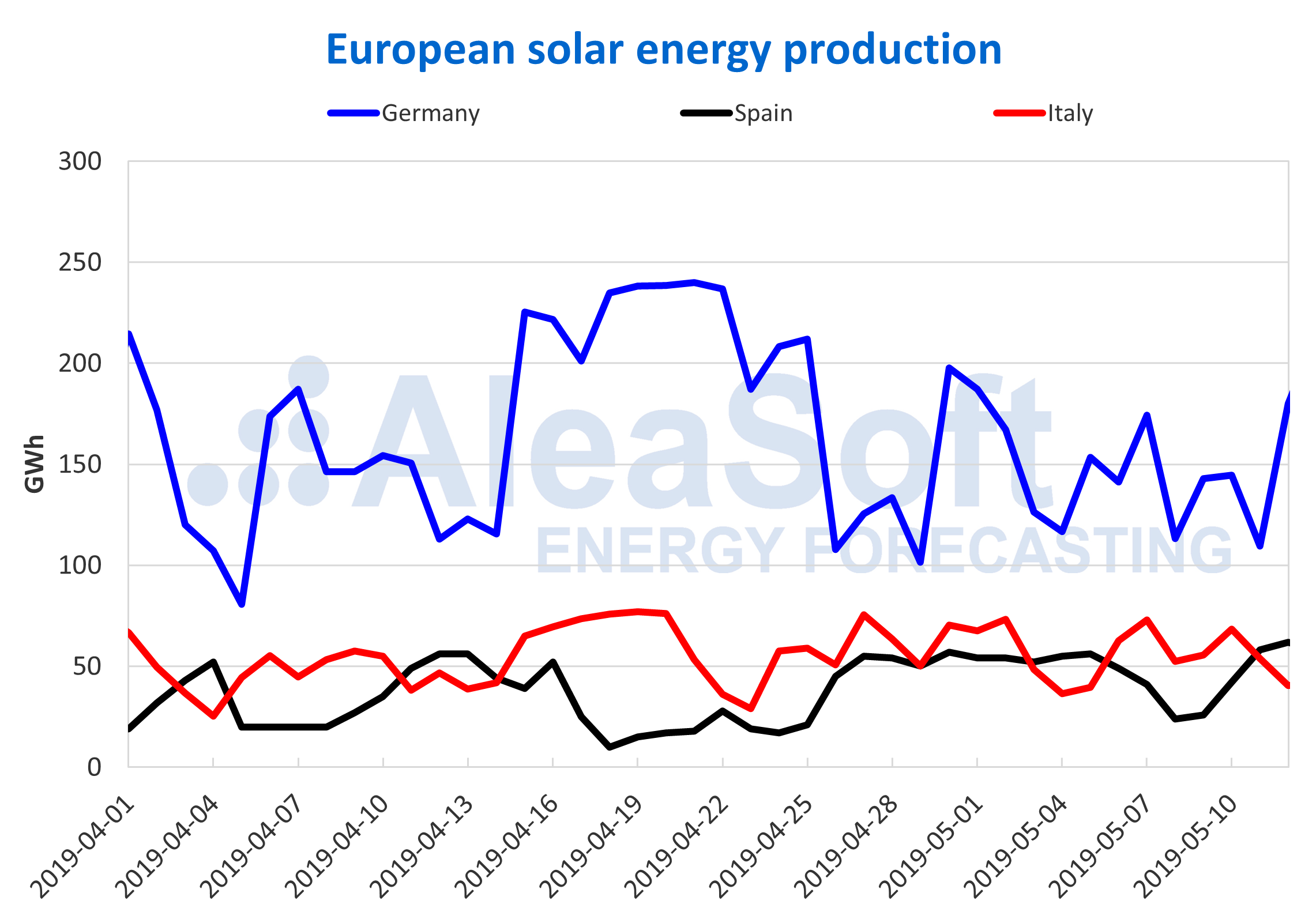 PrevAnteriorAleaSoft will be present in three important events of the sector in the next days
SiguienteInterSolar Europe 2019, the largest specialised fair of the solar industryNext
Menu
Facebook-f Twitter Linkedin Instagram