AleaSoft, April 25, 2019. This week, the average daily price of the MIBEL market gone from being the highest among the main European electricity markets, on Monday, April 22, to being the second lowest, on Thursday, April 25. According to AleaSoft´s analysis, the wind energy production variations are the main cause of these price variations.

In the first four days of this week of April 22, the MIBEL market of Spain and Portugal moved from the group of European electricity markets with higher prices, when on Monday, April 22, it ranked first with the highest average daily price between the main European markets, with 55.76 €/MWh, to the group of markets with the lowest prices, when this Thursday, April 25, reached the second lowest average daily price with 29.69 €/MWh, being 1.03 €/MWh higher than the EPEX SPOT market of France that was the lowest that day. This average price of Thursday 25 of the MIBEL market is also the lowest of the year so far. As happened on other occasions, the wind energy production variations are the main cause of these price fluctuations.

All the European electricity markets decreased their prices so far this week compared to those of the first four days of last week. The decreases range from 7% of the EPEX SPOT market of the Netherlands, to 55% of the EPEX SPOT market of Germany. The prices of Easter Monday, April 22, when negative prices were reached in the markets of Germany, France and Belgium, had a great influence on these decreases.

This week of April 22 the European electricity markets returned to position themselves in two groups, although the distribution is not as clear as it was from early April to Holy Week. In the group of markets with the lowest prices, reaching maximum prices of around 40 €/MWh, there are the EPEX SPOT market of Germany, Belgium, France and the Netherlands, and the Nord Pool market of the Nordic countries. In the group of markets with the highest prices, above the 45 €/MWh, are the N2EX market of Great Britain and the Italian IPEX market, although it should be noted that in the first two days of this week, the latter positioned itself in the group with the lowest prices. As previously mentioned, this week the MIBEL market is oscillating between both groups. 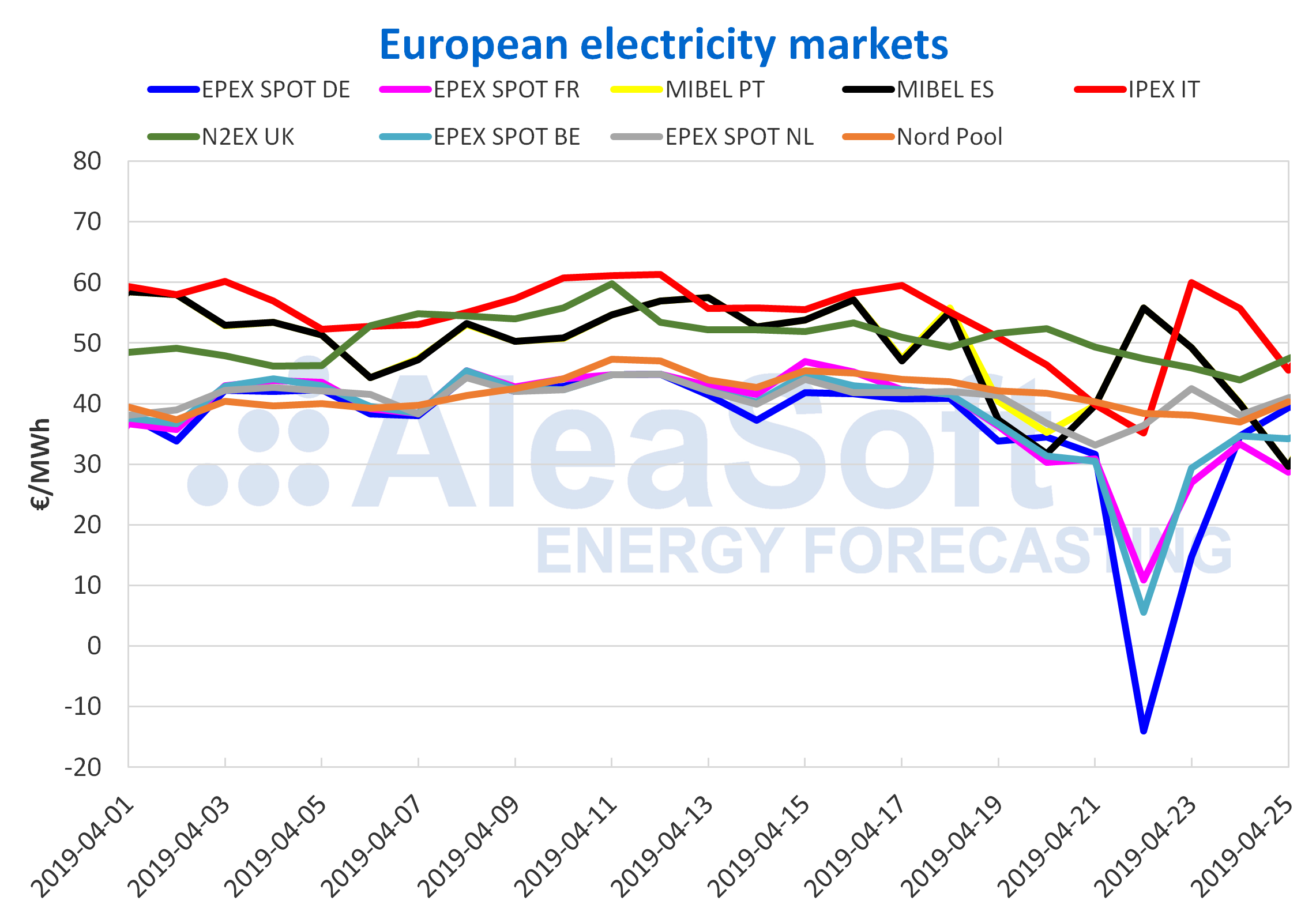 The price of Brent oil futures for the month of June in the ICE market continued to set annual highs this week, settling yesterday, April 24, at 74.57 $/bbl. The toughening of US sanctions on Iran, after the American country announced on Monday 22 that it would end, as of May, the sanctions waivers that some countries had to buy Iranian crude, as well as the political situation in Venezuela and the OPEC cuts are the fundamental reasons for this upward trend. In AleaSoft it is expected that in the next few days it may reach 75 $/bbl.

The TTF gas futures for May in the ICE market continue with a downward trend since Wednesday, April 10. During this week they remained stable over 14 €/MWh, settling at 14.26 €/MWh on yesterday’s session.

The API 2 coal futures for May 2019 in the ICE market settled yesterday at 59.80 $/t, with a drop of about 5% compared to the previous day, thus maintaining the downward trend they are experiencing since April 10 as expected in AleaSoft.

The prices of CO2 emission rights futures in the EEX market for the reference product of December 2019 set a new historical maximum for the product on Tuesday, April 23, when they settled at 27.54 €/t, although yesterday fell slightly to settle at 27.40 €/t.

The Spain´s electricity futures for May in the OMIP and EEX markets and those of Portugal in the OMIP market are maintaining a downward trend since April 10, after prices rose in the first days of the month, a behaviour parallel to that of gas and coal futures markets. During this week they were trading around 52 €/MWh.

The futures of France and Germany for May in the EEX market are also maintaining a downward trend since April 10, and in the session of April 24 they settled at 37.24 €/MWh and 39.27 €/MWh respectively.

During the Holy Week, from Monday, April 15, to Sunday, April 21, the electricity demand fell by 11%, mainly due to the holidays associated with Easter and helped by an increase of 1.1 °C in the average temperature. For this week of April 22, with Monday still a holiday in some communities, a recovery in demand is expected with an increase of 6.2% because of the return to normal labour and also due to a drop in temperatures of 1.1 °C on average.

The wind energy production in the peninsular territory recovered on Holy Week and grew by 5.8% compared to the previous week, when it had already been decreasing for two weeks. For this week of April 22, production is expected to continue increasing another 8.2%, especially thanks to the records of April 24 and 25, close to 300 GWh per day.

In the case of solar energy production, considering both photovoltaic and solar thermal, it fell by about 40% during the Holy Week. Throughout this week it is expected that the typical values for this time of the year of around 40 GWh per day will be recovered, with an increase in production of 25% compared to the Holy Week. 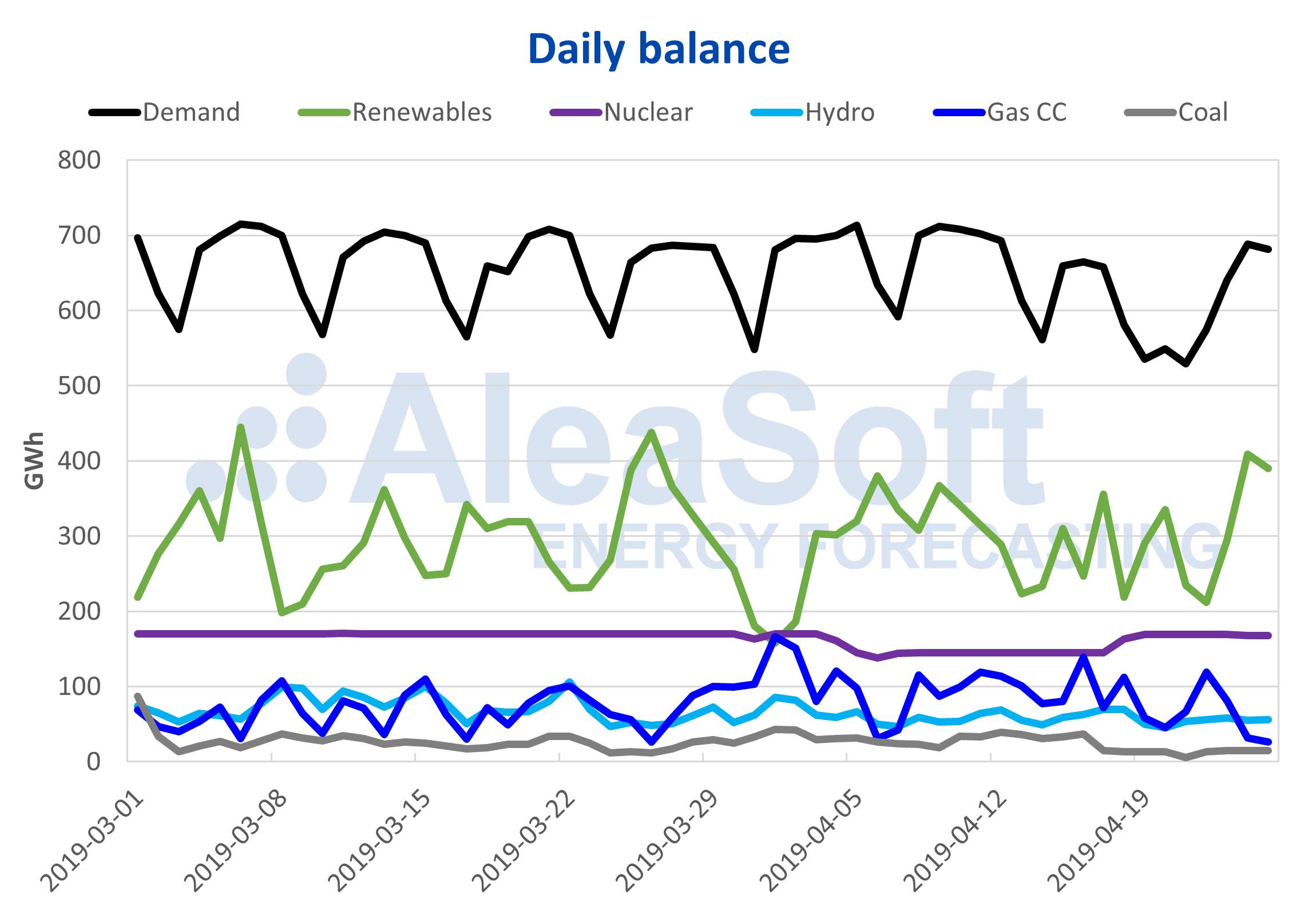 The hydroelectric reserves increased this week for the second consecutive week, this time by 219 GWh compared to the previous week, currently amounting to 11 335 GWh, which represents 49% of the total capacity, according to the information published in the Hydrological Bulletin of the Ministry for the Ecological Transition.