AleaSoft, February 11, 2019. AleaSoft analyses the behaviour of the European electricity markets in the first days of February. Wind energy production caused the electricity markets to fall in this second week of February, although a slight rise in temperature also influenced in the corresponding drop of demand, as well as a slight drop of gas and coal prices.

The price of Brent oil futures in the ICE market for April remains stationary around 62 $/bbl. As already mentioned in the analyses of previous weeks of AleaSoft, this equilibrium trend will be maintained unless the situation in Venezuela becomes complicated. If everything remains the same, the Brent price will oscillate in the coming weeks in a range between 60 and 62 $/bbl with a tendency to stabilize at 60 $/bbl in the mid-term.

As AleaSoft commented in previous weeks, this downward trend in gas and coal prices that continued last week may influence declines in the prices of European electricity markets in the coming weeks, when the weather conditions will be more favourable and the temperatures rise.

Comments made by AleaSoft last week on the prices of CO2 emission rights futures, for the reference month of December 2019, remain valid. Although during the second week of February at some point intraday prices reached 24 €/t, they are back around 22 €/t on Monday, February 11. In AleaSoft, these 22 €/t are still considered as an equilibrium value for the coming weeks.

Less importantly, the drop in electricity demand as a result of a slight rise in temperatures also influenced.

In AleaSoft it is considered that, taking into account the evolution of fuels, CO2 and temperature forecasts for the coming weeks, prices should go down to a path of around 40 €/MWh.

The electricity futures of France and Germany in the EEX market for March 2019 continue with the decreasing trend that they have been experiencing since the end of December last year. Last Friday, February 8, French futures closed at 48.39 €/MWh, which represents a difference of more than 11 €/MWh compared to December 17 when they were traded at 60.05 €/MWh. Meanwhile, the German futures dropped 9.26 €/MWh from 54.17 €/MWh on December 17, to 44.91 €/MWh last Friday.

Last week of February 4, the futures of Spain and Portugal for March 2019 in the OMIP market were stationary around 52 €/MWh and in the session of Friday, February 8, fell from that level to 51.50 €/MWh in the case of Spain and to 51.13 €/MWh those of Portugal. Spanish futures had a similar behaviour in the EEX market, where in the session of last Friday the traded value of March 2019 was 51.48 €/MWh.

In the case of the futures of the Nordic countries in the ICE market, they have followed a downward path since January 23, when the future of March 2019 was traded at 56.28 €/MWh and settled last Friday, February 8 at 48.78 €/MWh, which represents a decrease of 7.50 €/MWh. 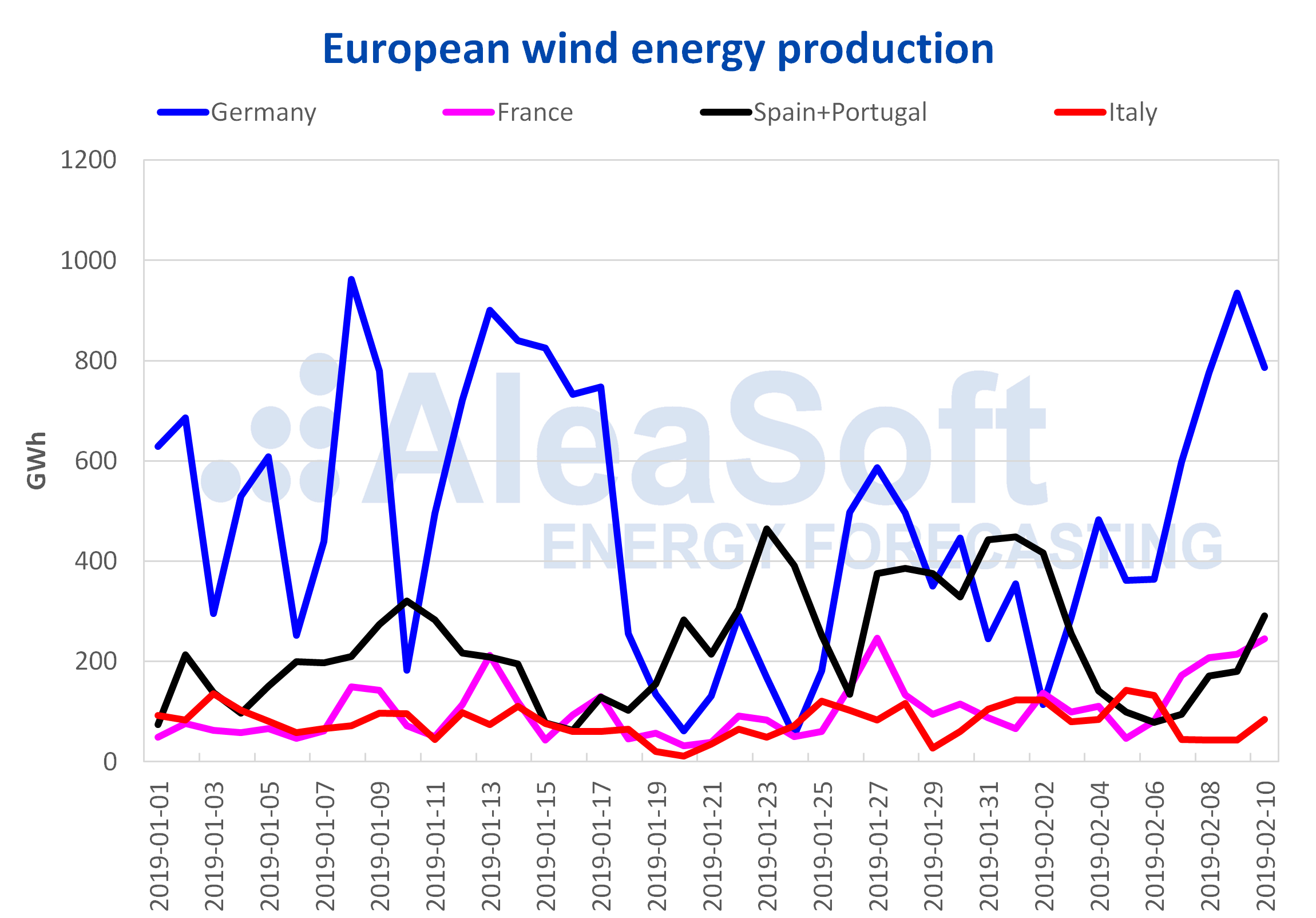 For these three countries, solar energy production forecasts are slightly higher for the next few weeks, considering that the number of hours of sunshine will increase. 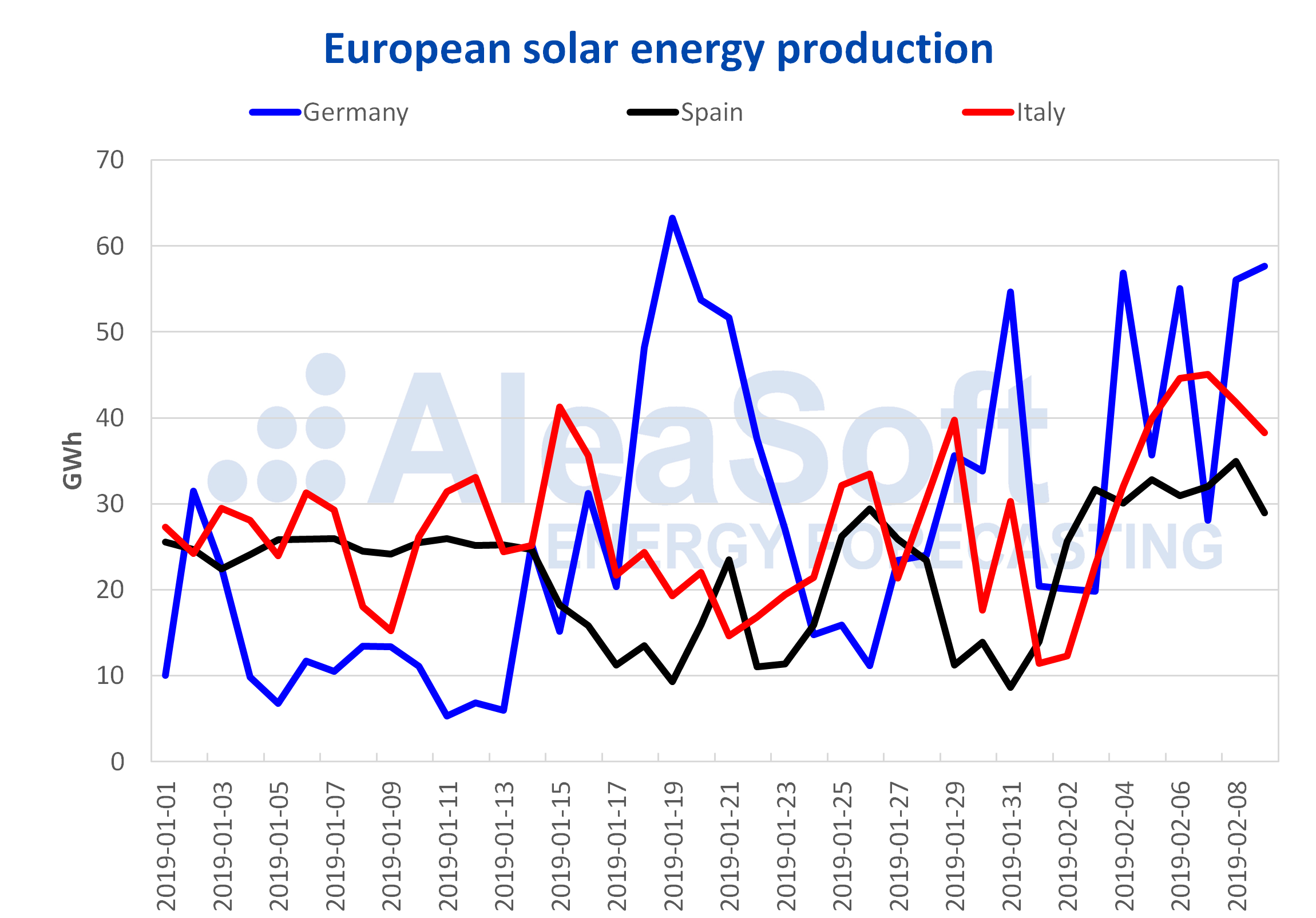