AleaSoft, February 7, 2019. In the first seven days of February the price of the MIBEL electricity market has been the lowest in Europe twice, and in two days, the highest one. According to the analysis carried out by AleaSoft, wind energy production is behind these price movements. 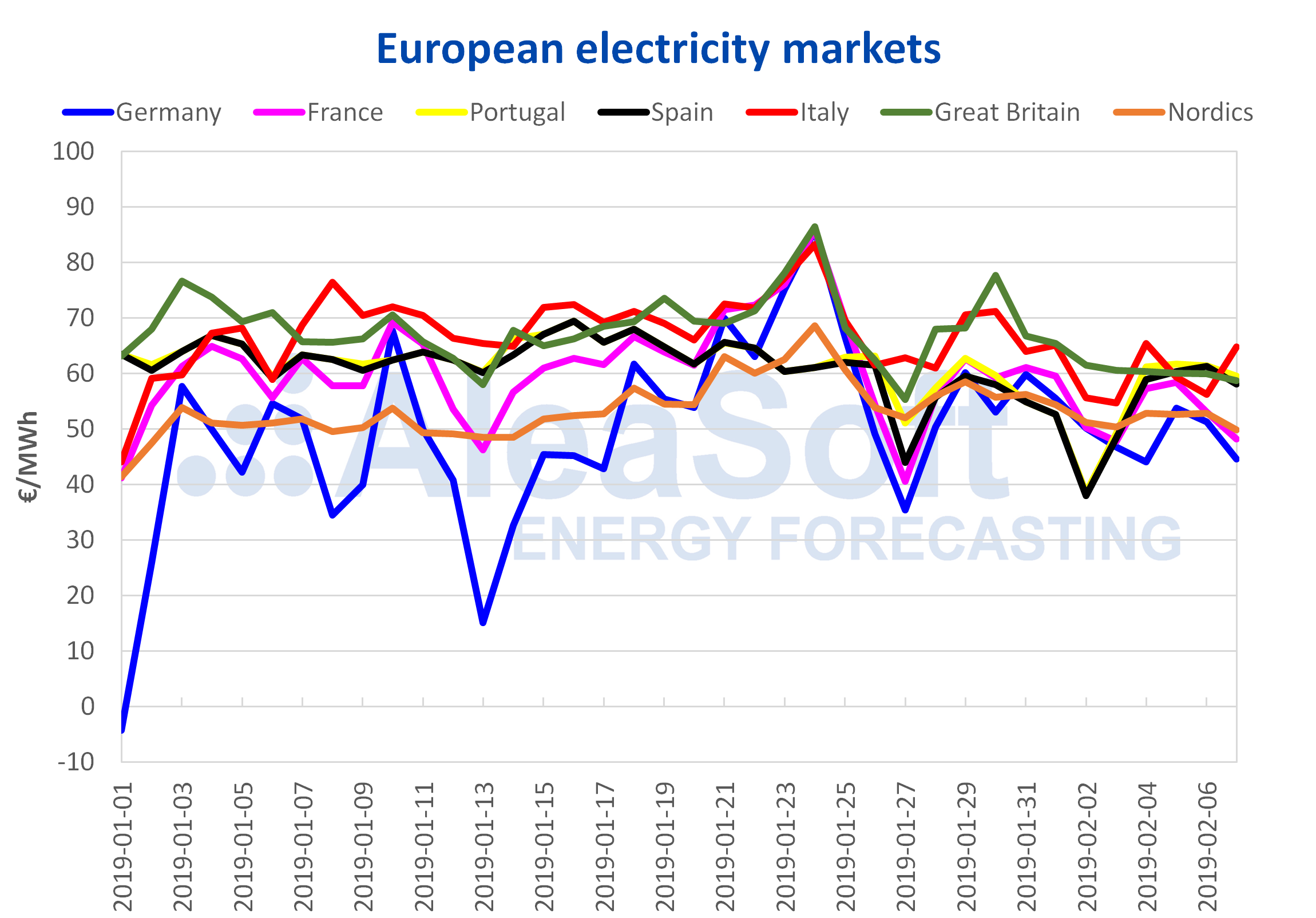 According to the analysis carried out by AleaSoft, the production with renewable energies, mainly wind energy, is the main factor in these price movements. On February 1 and 2 there was a high wind energy production. On day 1, 359 GWh were generated with this technology, the third highest value this year. On the 2nd, wind energy production was 316 GWh, which together with a lower electricity demand due to Saturday labour patterns, led to what is currently the lowest average daily price this year. On the other hand, on February 5 and 6 the wind energy production, which was 97 GWh and 75 GWh respectively, was lower than the usual values for February, which caused prices in the electricity market to rise. 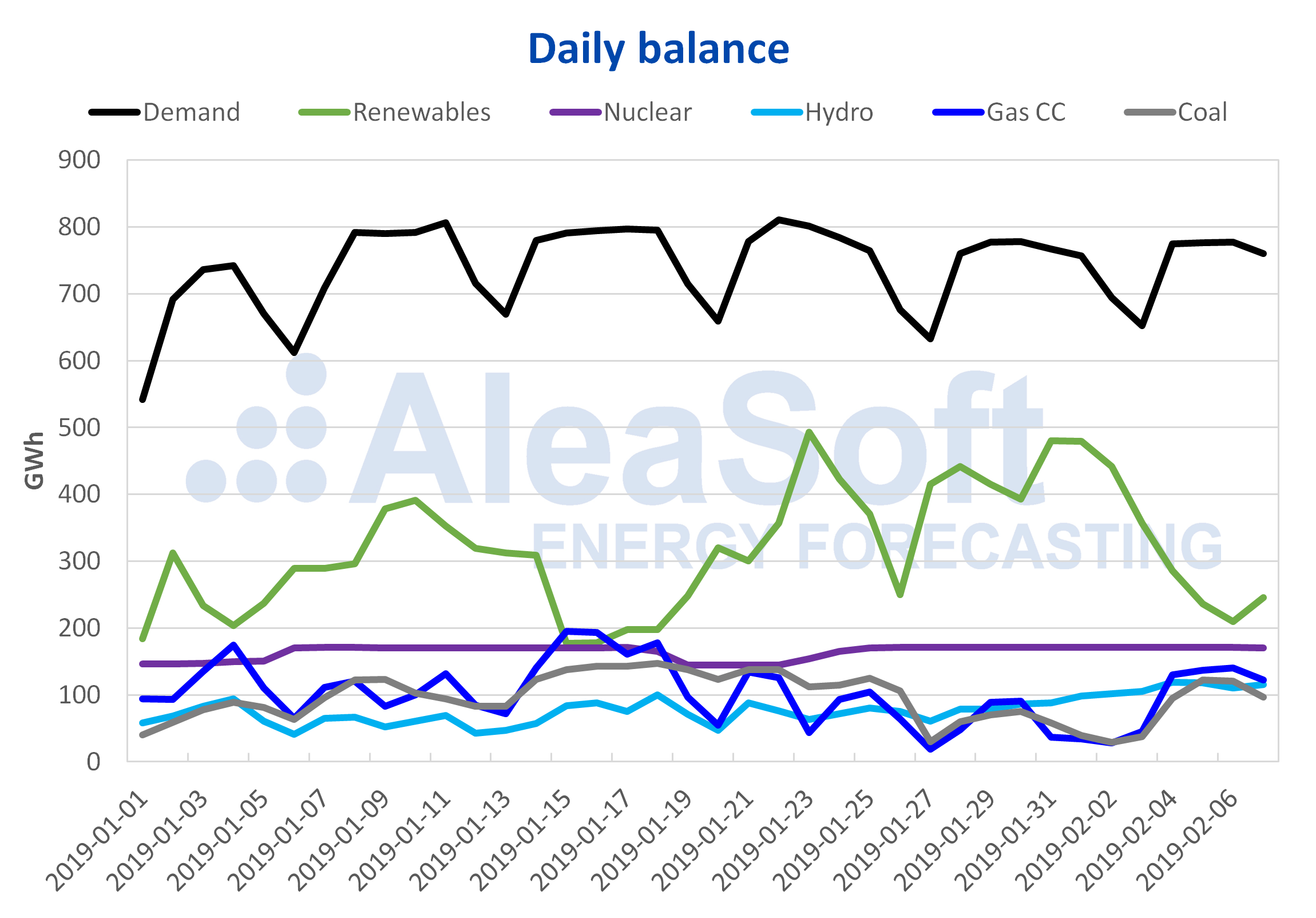 At European level, the lowest-price market in these first seven days of the month was the German EPEX SPOT, followed by the Nord Pool market of the Nordic countries. In the upper band, around 60 €/MWh, are the IPEX market of Italy and N2EX market of Great Britain.

The futures of Spain and Portugal in the OMIP market for March 2019 are stationary around 52 €/MWh since last week, after slowing the fall they had been experiencing since mid-December 2018. The futures of France and Germany for March 2019 in the EEX market this week have been trading between 2 and 3 €/MWh lower than last week; in the session of February 6, futures in France settled at 49.41 €/MWh and those in Germany at 46.17 €/MWh.

During this week of February 7, the price of Brent oil futures has remained stationary between 62 $/bbl and 63 $/bbl, although the sanctions of the US government on the Venezuelan state oil company PDVSA and the production cut on the part of OPEC countries continue to generate concern in the market.

The price of TTF gas has continued this week the downward trend that has been experiencing since mid-January when trading above 22 €/MWh, and in the session on February 6 the futures for March this year in the ICE market closed at 18.92 €/MWh, a value that was not seen since the beginning of April 2018.

For its part, this week the price of API 2 coal futures for March 2019 fell from 77 $/t on February 4 and 5, as estimated by AleaSoft earlier this week. In yesterday’s session, February 6, it closed at 77.1 $/t. It is expected that in the next few days it will remain stationary with a slight downward trend.

The price of CO2 emission rights is experiencing a slight upward trend since the beginning of February, when it was quoted at 21.84 €/t, closing 1.73 €/t higher yesterday February 6, at 23.57 €/t. In AleaSoft it is estimated that the price will continue to oscillate around the equilibrium value of 22 €/t.

According to the temperature forecasts analysed by AleaSoft, the next week of February 11, temperatures are expected to fall by an average of 1.7 °C, which will mean that electricity demand in Spain will increase by around 3.0%. This week, which began on February 4, the demand has been similar to that of the previous week and, when the week is finished, it is expected to have registered a slight increase of 0.5%.

At AleaSoft, it is estimated that by the end of this week, wind energy production will drop by 55% compared to last week. For next week a slight increase of 9.9% is expected.

On the other hand, solar energy production, which includes photovoltaic and solar thermal, will have risen 57% at the end of this week of February 4, if compared with the week of January 28, according to AleaSoft‘s forecasts. For the next week of February 11 is expected an increase of 14% compared to the current week.

This week, the hydroelectric reserves have increased again and currently stand at 10 582 GWh, which represents 45.5% of the total capacity.