AleaSoft, January 7, 2019. AleaSoft analyses the provisional 2018-year data advanced by REE in December updated with the latest available data. 2018 was the year with the second highest average price in the market history, and was marked by the explosion of the price of CO2 emission rights and the recovery of hydroelectric production after a long drought period. AleaSoft describes the causes of high market prices and comments on the outlook for 2019.

With still provisional data from Red Eléctrica de España (REE) corresponding to the end of the year that the operator published on December 13, which have been updated by AleaSoft with more recent data, the Spanish peninsular electricity system ended the year 2018 with an electricity demand of 253.5 TWh. This figure represents an increase of 0.4% with respect to the demand of 2017; taking into account temperature and working days patterns, the estimated corrected growth is 0.3%. The growth figure for electricity demand in 2018 is the lowest growth recorded since 2014, when demand fell by 1.1% compared to 2013. In those years, demand had been falling since 2009, so this 2018 figure can be considered the lowest growth since the economic recovery began in 2015. 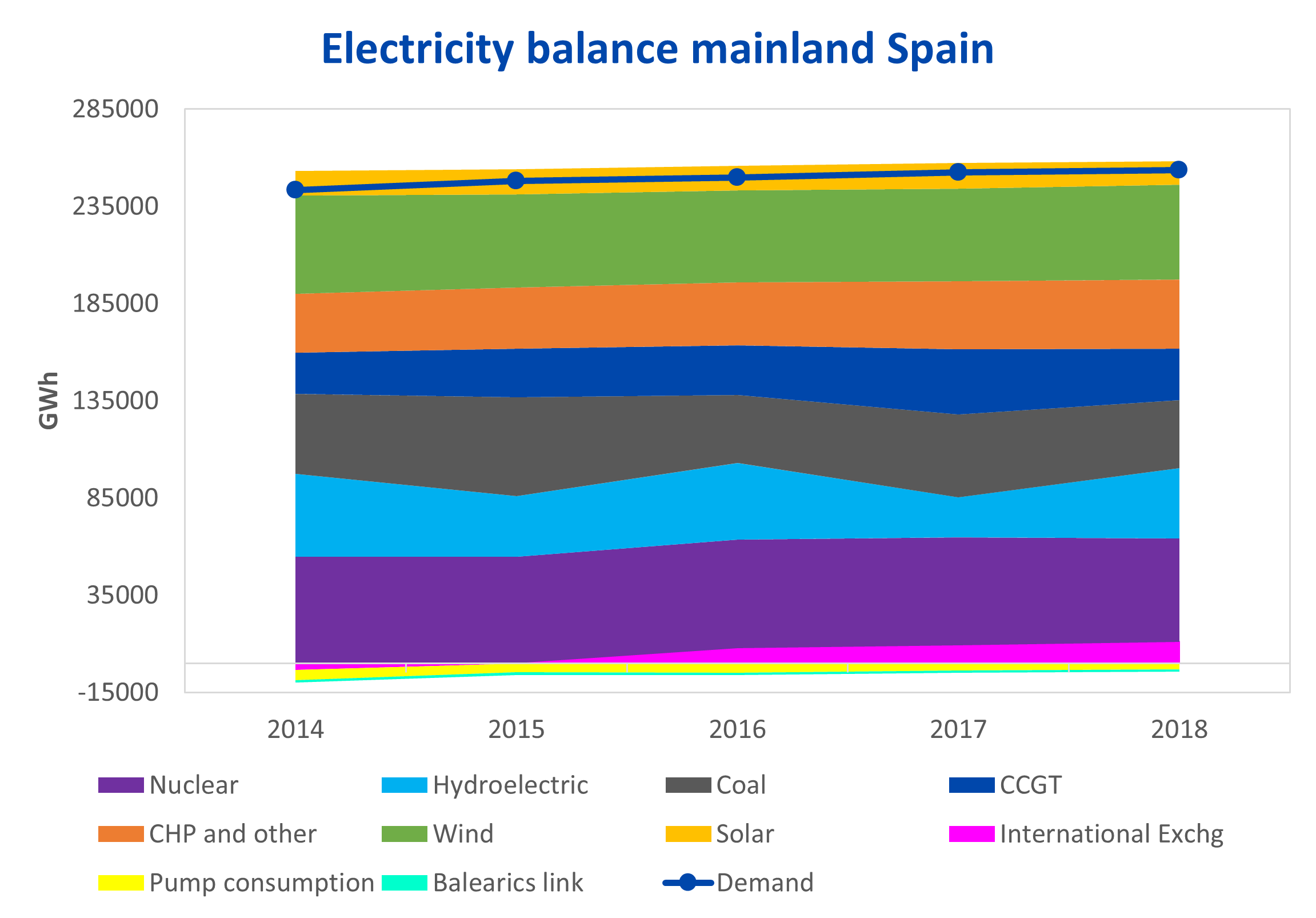 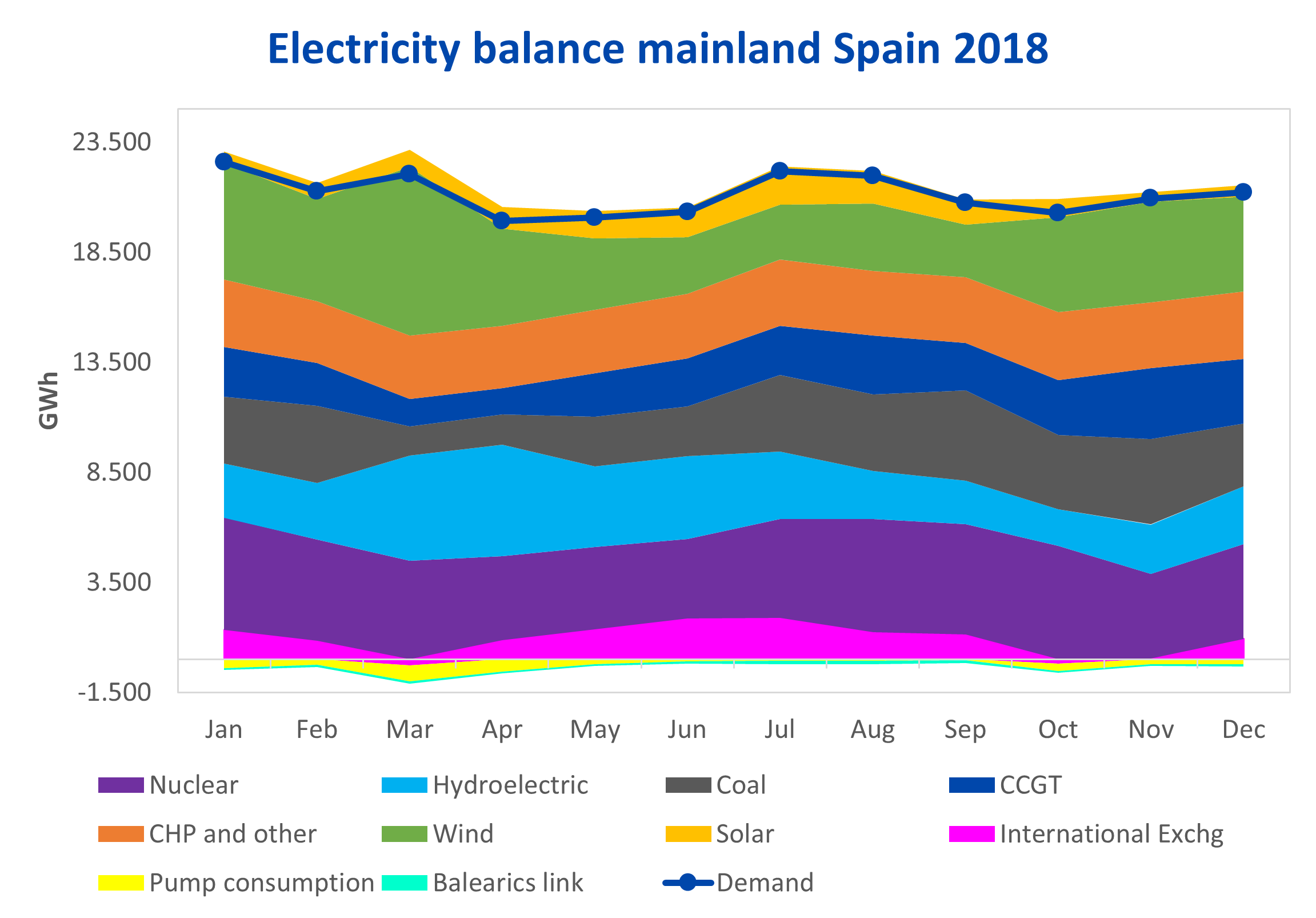 In 2018, the Spanish electricity system generated 246.9 TWh of electricity, 0.5% less than in 2017. Electricity generation covered 97.4% of the demand, the rest was covered by energy imports.

Nuclear power plants were the technology that produced more electricity in 2018 with 53.2 TWh and that supplied 21.0% of the demand. The production from renewable energy sources amounted to 101.1 TWh, which represents 39.9% of the demand and an increase compared to the 33.7% value registered in 2017. Among the renewable technologies the wind energy stands out with 48.9 TWh and a demand coverage of 19.3%; the hydroelectric plants, with 36.1 TWh and 14.2% coverage; solar photovoltaic, 7.3 TWh and 2.9%; and solar thermal with 4.5 TWh and 1.8%. In the case of the hydroelectric power plants, the production growth compared to the previous year was 74.2% thanks to the fact that 2018 was a rainy year that meant the end of the drought period.

According to provisional data from REE, the peninsular wind power capacity grew 103 MW in 2018, a growth of 0.5%. On the other hand, photovoltaic power increased by 18 MW, which represents a growth of 0.4%. These numbers may not seem significant, but they are the largest increases in renewable power since 2013 for wind and from 2015 for photovoltaics. Auctions for new renewable power facilities carried out during this year suggest that in the coming years the installation of new renewable capacity, especially photovoltaic, will increase significantly in Spain, in order to achieve the goals of reducing greenhouse gas emissions by 2030.

Generation with fossil fuels, gas and coal, accounted for 35.6% of the total electricity demand and decreased compared to 42.0% in 2017, largely due to the increase in hydroelectric generation. 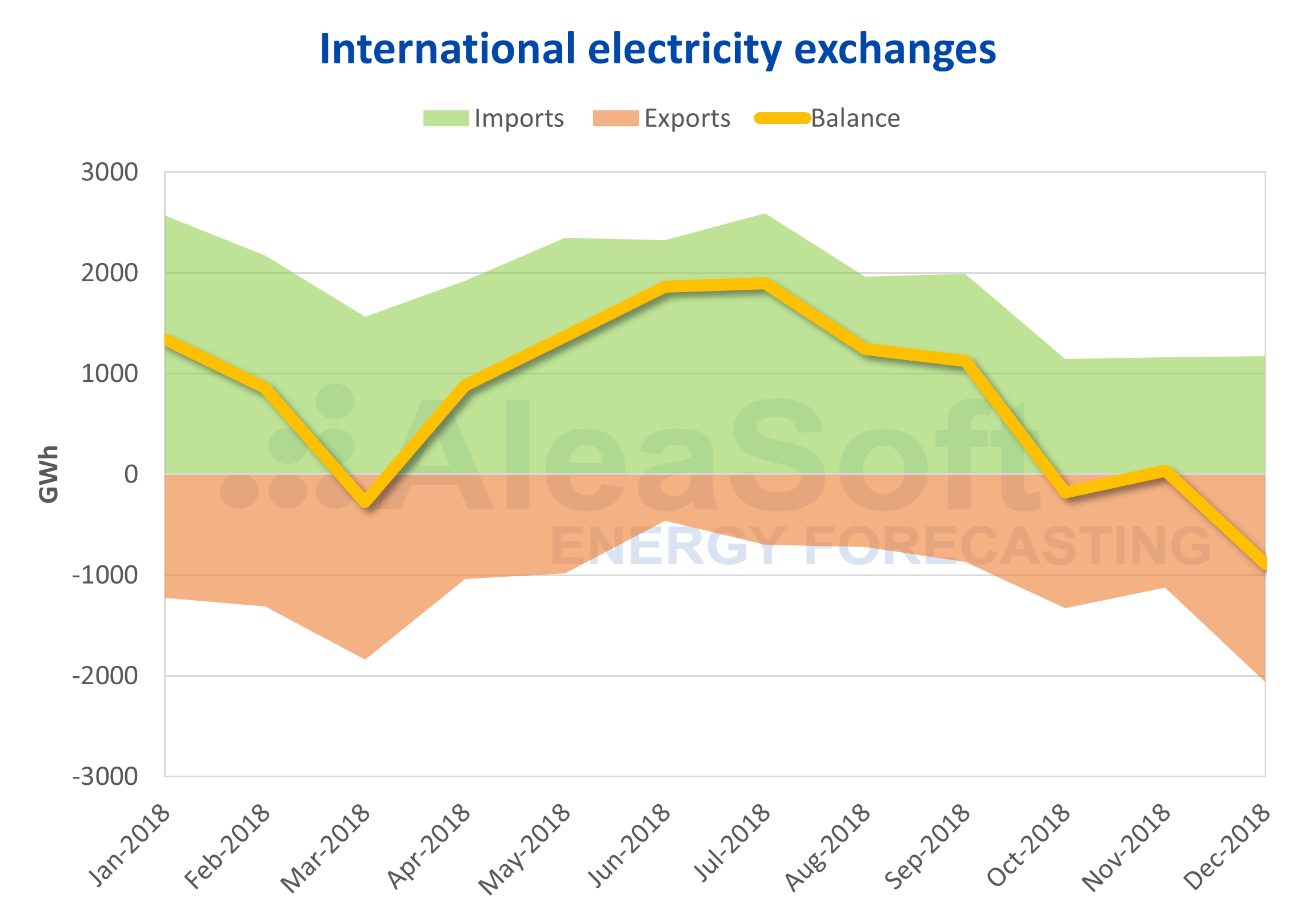 The Iberian electricity market MIBEL in Spain recorded this 2018 the second highest annual average price in its history, 57.29 €/MWh, just behind 2008 with 64.43 €/MWh. Also, several months of 2018 registered record prices, specifically the months of February, May, June, July, August, September, October and November were the most expensive in the last decade. The most expensive hourly price of the year was given at hour 21 of October 4 with 84.13 €/MWh, and the lowest one, on January 1 from hour 6 to hour 8 with 2.06 €/MWh.

The most visible peculiarity of the MIBEL market in 2018 was that the relatively high hydroelectric production did not manage to lower the price, something that was common in previous years. The causes that led to the price remaining high are basically two. On the one hand, the price of fossil fuels that was high during a good part of the year and especially the price of CO2 emission rights that multiplied by five in the last year and a half. And, on the other hand, the fact that we came from a long drought period with the water reserve level at historic lows, which allowed hydroelectric power plants to manage their sale offers in the electricity market to maximize profits, something that is not possible when the reservoirs are full and water must be released with less margin for optimization.

This year 2018, the undisputed protagonist of the news of the electricity market was the price of CO2 emission rights. The year began with a price of around 8 € per ton of gas, and exceeded 25 € in September, coinciding with price peaks in the wholesale electricity market.

The price of the main fossil fuels for the generation of electricity, gas and coal, also had an upward trend during 2018, and both recorded their highest monthly prices in September, coinciding with the CO2 and the electricity market, without a doubt, four closely related markets. The monthly average for the European API2 coal in September was $100.69 per ton, and for the European Zeebrugge gas, 27.64 €/MWh. 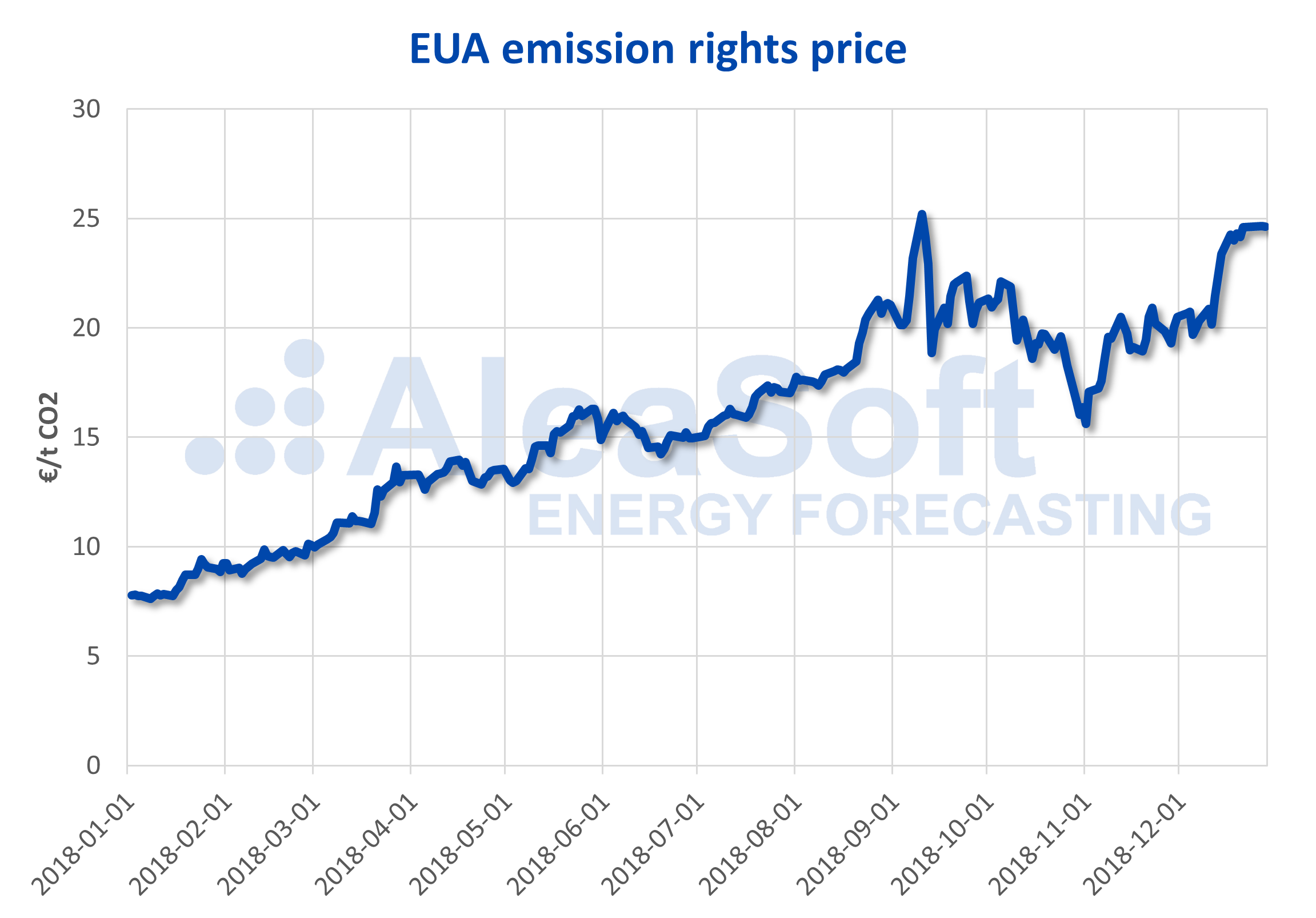 The market for emission rights is expected to continue with rising prices in the coming years, according to AleaSoft, as it is another tool to favour the generation of electricity with technologies with less greenhouse gas emissions. The implementation of the reserve for market stability (MSR) aims to ensure that there is no oversupply of rights and avoid the price drops that occurred in the past.

On the other hand, the installation of new renewable capacity is expected to grow exponentially in Spain and throughout Europe. The growth of renewable energy production, and especially photovoltaic, will exert downward pressure on the price of electricity markets, but, according to AleaSoft, although there may initially be a slight downward trend, at the medium and long term the current market equilibrium will remain and prices will not sink.