Spain, most expensive european market on the first day of the year

AleaSoft, January 3, 2019. Even with a weak electricity demand during the holiday season, low wind energy places the Spanish electricity market as the second most expensive in Europe, and the one with the highest price for January 1.

The price registered for January 1, 63.45 €/MWh, which was the most expensive among the European markets that day, is particularly striking. At the same time, the German market recorded a negative average price of -4.30 €/MWh. The low wind energy in the Iberian Peninsula on the first day of the year could not compensate one of the lowest demands of the winter season and triggered the price on a day that is usually one of the lowest of the year.

The rest of European markets analysed by AleaSoft remained below or around 60 €/MWh during these holidays. 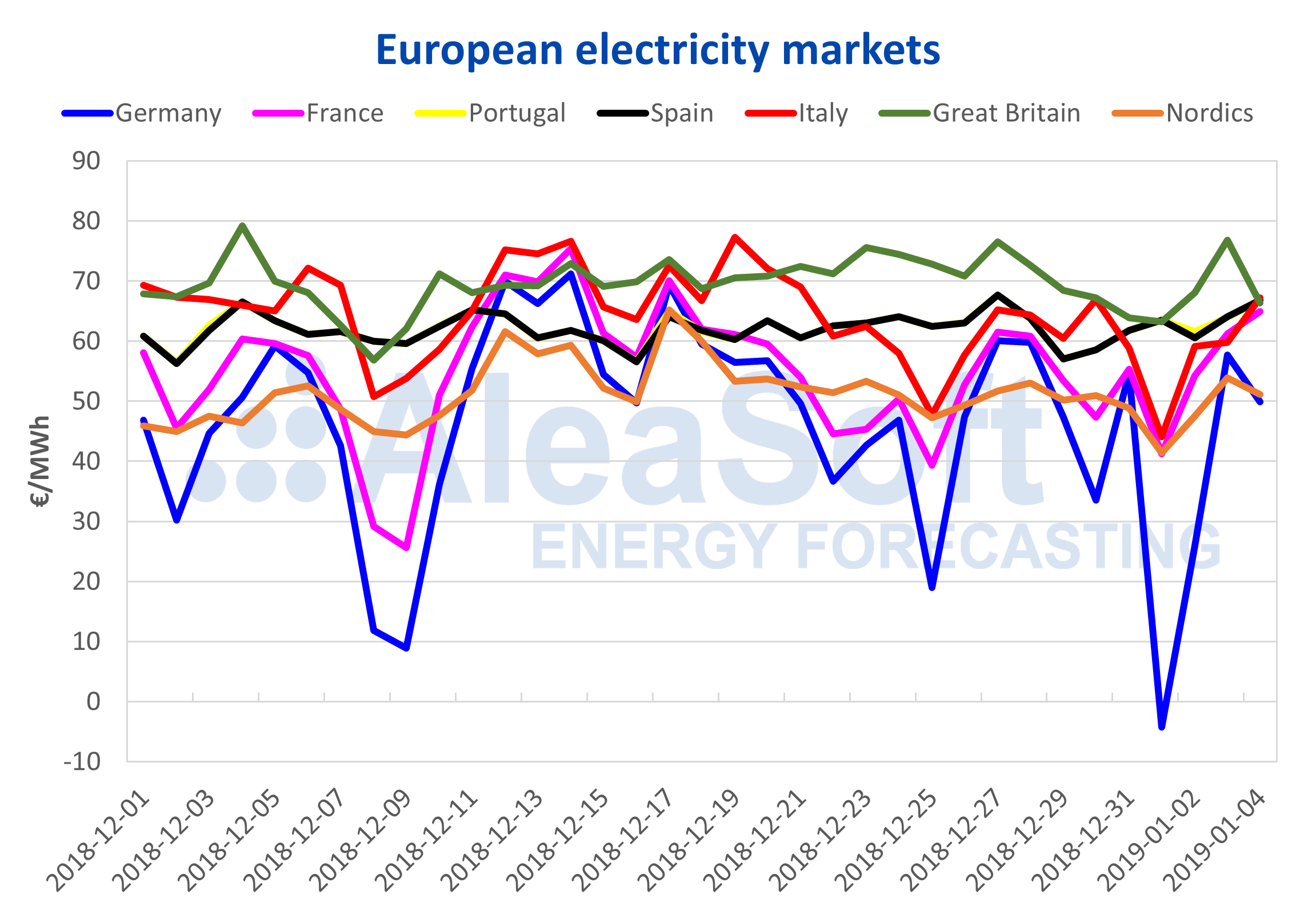 During this period between Christmas and New Year, the trading activity in the futures markets of oil, gas, coal and CO2 has been scarce, because of that some prices have registered some fluctuations.

The price of European API2 coal for the month of February fell below $86 per ton on December 27, a price as lower as that did not occur since December 4, and since then has not recovered the previous level. While the European gas TTF and Brent oil recover shyly after hitting bottom: gas at 21.98 €/MWh on December 31, and Brent at $52.73 per barrel on December 27. For Brent, this could be the beginning of the price recovery forecasted for the first quarter of the year, according to the producing countries that expect the price to recover between 20% and 30% during the first quarter of 2019 as a result of agreements to reduce production and stabilize prices. 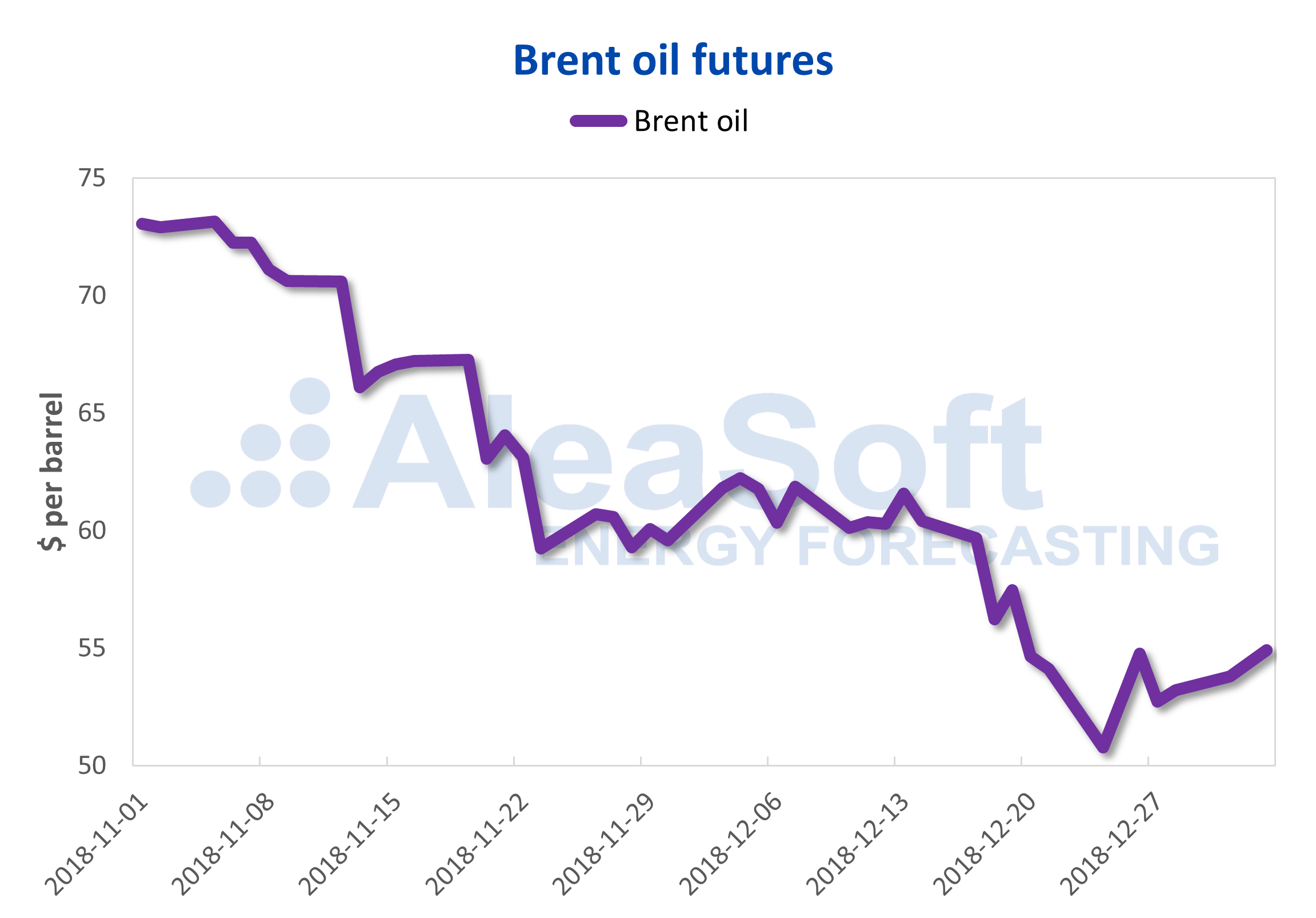 Sources: Prepared by AleaSoft with data from ICE.

Electricity demand during the week of December 24 fell by 13.5% compared to the previous week, mainly due to the festivities and school holidays, although the drop in temperatures, which, since then, had been slightly above the usual for the time of year, slowed a little the fall in demand.

For this first week of 2019, AleaSoft forecasts indicate a demand recovery of 6.3% favoured by a fall in temperatures that could be more than 2°C below typical values for this time of year, and also by an increase in working patterns, although school holidays are extended until after the Three Kings Day.

After the holidays period, for the week of January 7, the expected increase in electricity demand is 15.7%, according to AleaSoft, because in addition to the return to normal work activity, the fall in temperatures are expected to reach around 3.5°C below the historical averages.

The reserves in the hydroelectric dams of the peninsula are 10,177 GWh, very close to the average values of the last five and ten years, but 52.8% higher than a year ago. 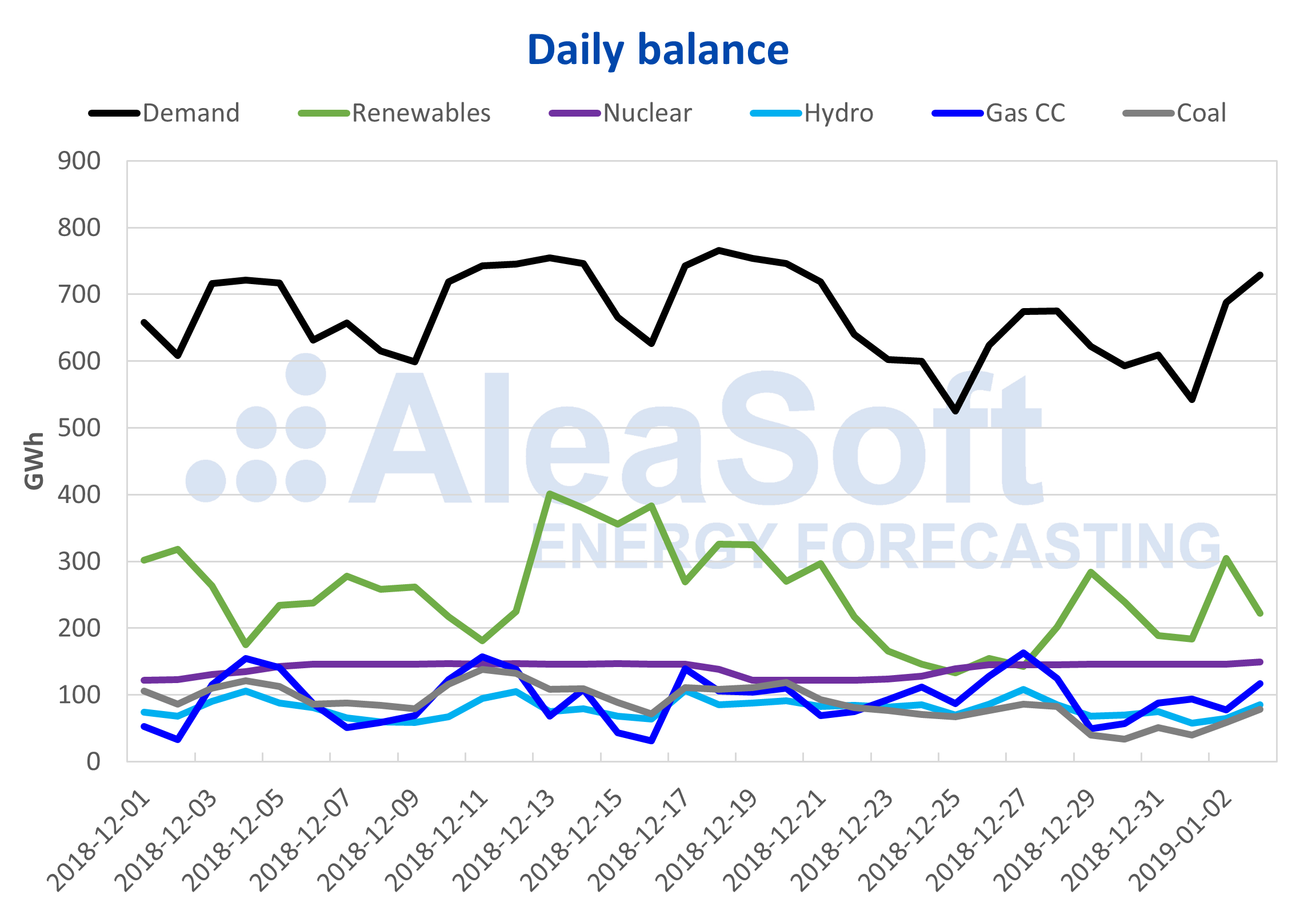 Wind energy production during the last week of 2018, from December 24 to 30, fell by 43.9% with respect to the previous week and stood 50.1% below the seasonal level expected for this time of year, according to AleaSoft. For this week and the next, from December 31 to January 13, AleaSoft forecasts an increase in wind energy production, but still below the typical production for this time of year.

On the other hand, solar energy production, which includes both photovoltaic and thermal, is expected to end this first week of the year with an increase of 8.1% compared to the last week of 2018. For the coming weeks, AleaSoft forecast points to a significant increase in production, above average historical values.

PrevAnteriorArticle of opinion: How can photovoltaics change a region
Siguiente2018 ended as the second most expensive year of the Spanish electricity market historyNext
Menu
Facebook-f Twitter Linkedin Instagram