AleaSoft, July 14, 2020. The Tax on the Value of Electricity Generation came into force in Spain at the end of 2012. It represents an extra cost for all electricity producers, that ends up hurting them against their cross‑border competitors and increasing the price that the consumers pay for the electricity, so at AleaSoft its removal is proposed. During its suspension, the effects in the market were notable.

The Tax on the Value of Electricity Generation (IVPEE) appeared in late 2012, as part of a set of fiscal measures for the energy sustainability. The Government stated that the set of measures of which this tax is part was aimed at addressing the tariff deficit, whose estimated value as of December 2011 reached 24 billion Euros, a figure that it was estimated that could double in 2015 if no action was taken.

In October 2018, due to the increase in the price of the electricity bill, the Spanish Government published a Royal Decree‑Law that contained, among other measures, the six‑month suspension of the IVPEE. At that time, at AleaSoft the effect of this measure was estimated on a decrease of between 5% and 6% in the electricity price in the MIBEL market, although the effect of the exemption from payment of the “green tax” to the combined cycle gas turbines was also included in these calculations. As expected, the impact of these measures on the market prices became noticeable when, at the time the temporary suspension of the tax took effect, the electricity futures prices of the Spanish OMIP market were reduced for the products that covered the period of suspension.

Another important aspect for which this tax is harmful is reflected in the electricity imports. The tax comes to light at the end of 2012, the year in which the annual imports decreased by 1.8% compared to the previous year. The following year, 2013, is the first year with the IVPEE in force and the imports increased by 31%. This does not mean that the 7% tax is the only cause of the increase in imports, but it undoubtedly puts local producers at a disadvantage compared to their counterparts of countries with interconnected borders.

During the following years of application of the tax, the increase in imports from France and Portugal continued, with a great leap in late 2015 after the start of operations of the Santa Llogaia‑Baixas interconnection. It is noteworthy that 2019 was the first year, since the IVPEE came into force, in which total imports decreased compared to the previous year, coinciding with the fact that it was the year in whose first quarter, the one with the highest demand that year, this tax was suspended. 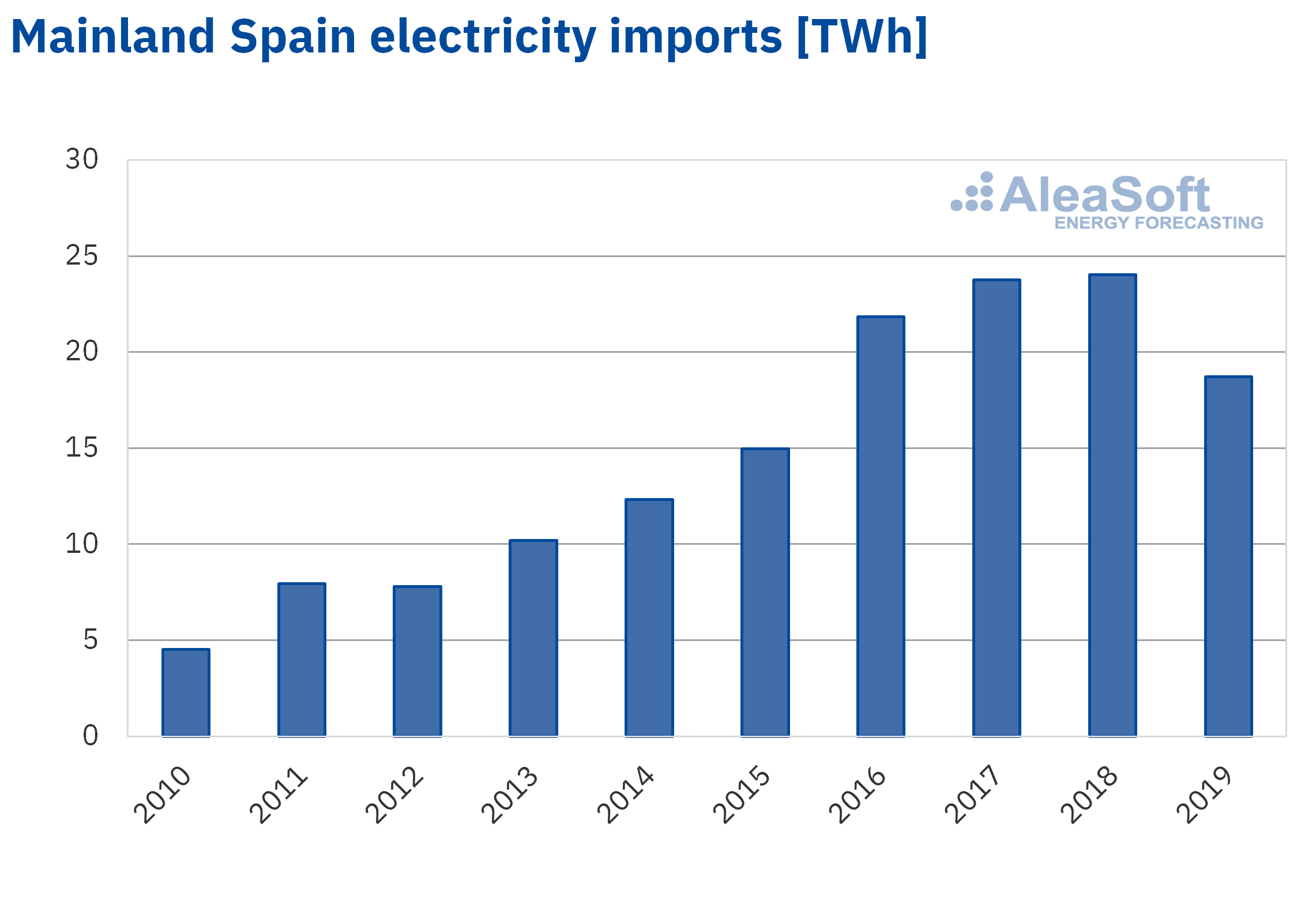 When, in the second quarter of 2019, the 7% tax was reintroduced, at AleaSoft it was estimated that this would represent an increase in the electricity price of between 2% and 5%, and in effect, the consequences of the reintroduction of the tax did not wait. Spain marked the highest price in Europe on various occasions during the month of April 2019, the first of the return of the electricity generation tax.

This tax is detrimental to all parts of the electricity market and penalises all production technologies equally. Even the legality of the IVPEE was questioned by the European Commission as it was considered contrary to the Union law.

According to data published in 2019 by the National Commission of Markets and Competition (CNMC), from 2014 to 2017 the Spanish electricity system generated surpluses, after at least 13 years of deficits. In light of these data, the current need for the 7% tax on electricity generation might be questioned.

At AleaSoft it is considered that the IVPEE should be eliminated, as it constitutes a penalty for the local producers. In addition, this penalty discourages the investment in new generation capacity with renewable technologies, precisely in one of the countries in Europe where the investment in photovoltaic parks would be most attractive. The 7% generation tax not only affects the ecological transition in Spain, but also makes the construction of generating plants less attractive, which in turn constitute a source of work and economic sustainability.