April: a month of contrasts in the MIBEL electricity market

AleaSoft, May 2, 2019. According to the analysis carried out by AleaSoft, the recently ended month of April was a month of contrasts for the MIBEL electricity market, which on the one hand was the highest daily average price in Europe seven times, and on the other hand, on April 25 reached the lowest average daily price of the year so far.

The MIBEL electricity market ended the month of April 2019 with an average monthly price of 50.41 €/MWh for Spain and 50.65 €/MWh for Portugal, which represents an increase of 3% compared to the average price in March this year, and more than 18% compared to April 2018. On April 1, the 7% tax on electricity generation came back into force in Spain, after having been suspended for six months, a factor that, according to estimations of AleaSoft, caused prices to rise by around 5% initially and currently by close to 4%. The price of CO2 emission rights, which in April averaged 25.67 €/t, increased by 17% compared to March, and practically doubled compared to April 2018, being a fundamental factor in the increase of the prices of the MIBEL market. The unscheduled stop of the Vandellós II nuclear power plant due to problems in a valve, which lasted for 14 days, between April 4 and 18, also favoured the price rising in this month of April. Another important factor in the rise of prices is the decrease in hydroelectric production in Spain, which was 10% compared to March, and 61% compared to April of last year.

April was a month of contrasts in the MIBEL electricity market, mainly driven by variations in wind energy production. On the one hand, this market had the highest daily average price for seven days of the just-ended month, when compared to the main electricity markets in Europe. Four of those seven days were in a row, from last Saturday April 27 until the end of the month. And, on the other hand, there were records of the lowest prices of the year so far. The two days with the lowest average daily price of the year are in April: on the 25th, with 29.69 €/MWh, when the Iberian wind energy production was 383 GWh, and on the 20th, when a day of low demand, being Holy Saturday, coincided with a high wind energy production in the Iberian Peninsula, of 284 GWh, obtaining an average daily price for Spain of 31.75 €/MWh and for Portugal of 35.23 €/MWh. In addition, the price of the hour 5 of April 25 is the lowest hourly price of the year so far for Portugal and the second lowest for Spain.

In April, practically all European electricity markets increased their price compared to March 2019 and April last year, except the N2EX market of Great Britain, which decreased the price in both cases and the Nord Pool market of the Nordic countries that closed April at 40.82 €/MWh, with a slight decrease of 0.03 €/MWh compared to March. The common factor for this rise in prices is the increase of the CO2 emissions price discussed above. Market to market, there are other elements that helped in the rise of prices. For example, in Germany, France and Italy, the wind energy production in April was around 40% lower than in March. In Spain and Italy, solar energy production, which includes both photovoltaic and solar thermal, fell by 16% and 3%, respectively, compared to March 2019.

During the month of April, the European electricity markets were divided into two groups according to their price. In the first part of the month the groups were well differentiated, but at the height of Holy Week the volatility was increased, although in general the distribution remains. In the group of markets with higher prices, which are generally around 50 €/MWh or above, are the Iberian MIBEL market, the N2EX market of Great Britain and the IPEX market of Italy. In the group of markets with lower prices, around or below 40 €/MWh, are the EPEX SPOT market of Germany, France, Belgium and the Netherlands and the Nord Pool market. 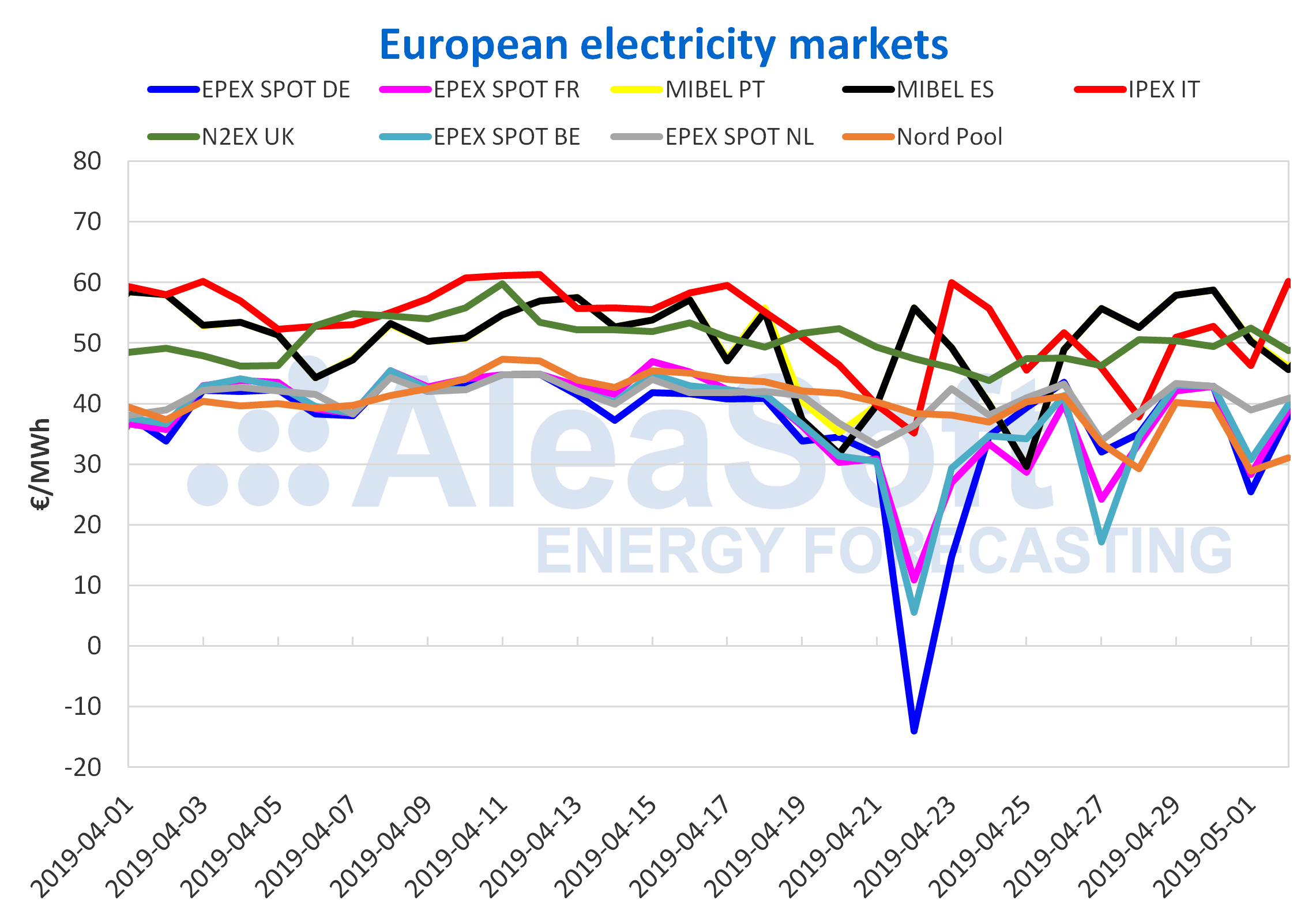 The price of Brent oil futures for the month of July in the ICE market remained with an upward trend during the month of April, increasing by 5.1% between April 1 and April 30. On April 23 it settled with the highest price of the year so far, of 73.89 $/bbl, although on Friday, April 26 it suffered a fall of 2.7% compared to the previous day, down to 71.63 $/bbl. This week it is recovering again and yesterday May 1 settled at 72.18 $/bbl. This market in April was marked by the announcement by the United States that, as of May, it would put an end to the sanctions waivers that some countries had to buy Iranian crude, in addition to other factors that remain, such as the political instability in Venezuela and the OPEC cuts.

The futures of gas TTF for June in the ICE market began April with an upward trend, but since April 10 they present a downward trend. In the session of yesterday, May 1, they settled at 14.06 €/MWh.

The API 2 coal futures for June 2019 in the ICE market settled yesterday, May 1, at 60.35 $/t, the lowest value since Wednesday, April 3. Like gas, the coal price maintained an upward trend until April 10, when prices began to fall.

The futures prices of CO2 emission rights in the EEX market for the reference contract of December 2019 remained with an upward trend for almost the entire month of April, reaching record highs, up to the 27.54 €/t of April 23. However, last Friday they fell by 5.2% compared to the previous day, settling at 25.85 €/t, this being the lowest value since April 10. This week they have recovered again and on Tuesday, April 30, they settled at 26.30 €/t.

The price of electricity futures has fallen this week compared to the previous week, a move similar to that of gas, coal and CO2 emission rights futures. The price of the future for the third quarter for Spain and for Portugal fell this week by 1.2% in both the OMIP and EEX markets. The future for the year 2020 also registered a fall, but a little slighter: 0.5% in the OMIP market and 0.6% in EEX.

Regarding the behaviour of the electricity futures over the month of April that we just ended, the futures of Spain and Portugal in the OMIP market for the year 2020 rose by 4.3%, while in the EEX market the future of Spain rose slightly less, by 3.9%. French and German futures in the EEX market rose 6.3% and 7.3% this month, respectively. The evolution of electricity futures for the year 2020 followed the same movements as the price of CO2 emission rights, which during this month increased by 22%.

In the case of electricity futures for the third quarter of this year, the increase during the month of April was somewhat more important, between 8% and 10% for all countries. In this case, its evolution also followed the CO2 emission rights price, although, in the case of France and Germany, the influence of the evolution of the gas price, which increased by 1.2%, is also clear.

The electricity demand in mainland Spain in the just concluded April was 2.0% lower than in April of last year. According to data from REE, once the effects of temperature and working patterns were corrected, the decrease was of 1.7%. In the first three days of this week, the demand decreased by 4.8% compared to the previous week, due to the May 1 holiday and also because the temperatures are rising. Next week, it is expected that the electricity demand will increase mainly due to the fact that there will be no holidays.

The hydroelectric production dropped significantly in April, 61% compared to April 2018. So far this week the highest daily production was 80 GWh, on Tuesday, April 30.

The combined cycle production grew 129% in year-on-year terms and 33% compared to March of this year. 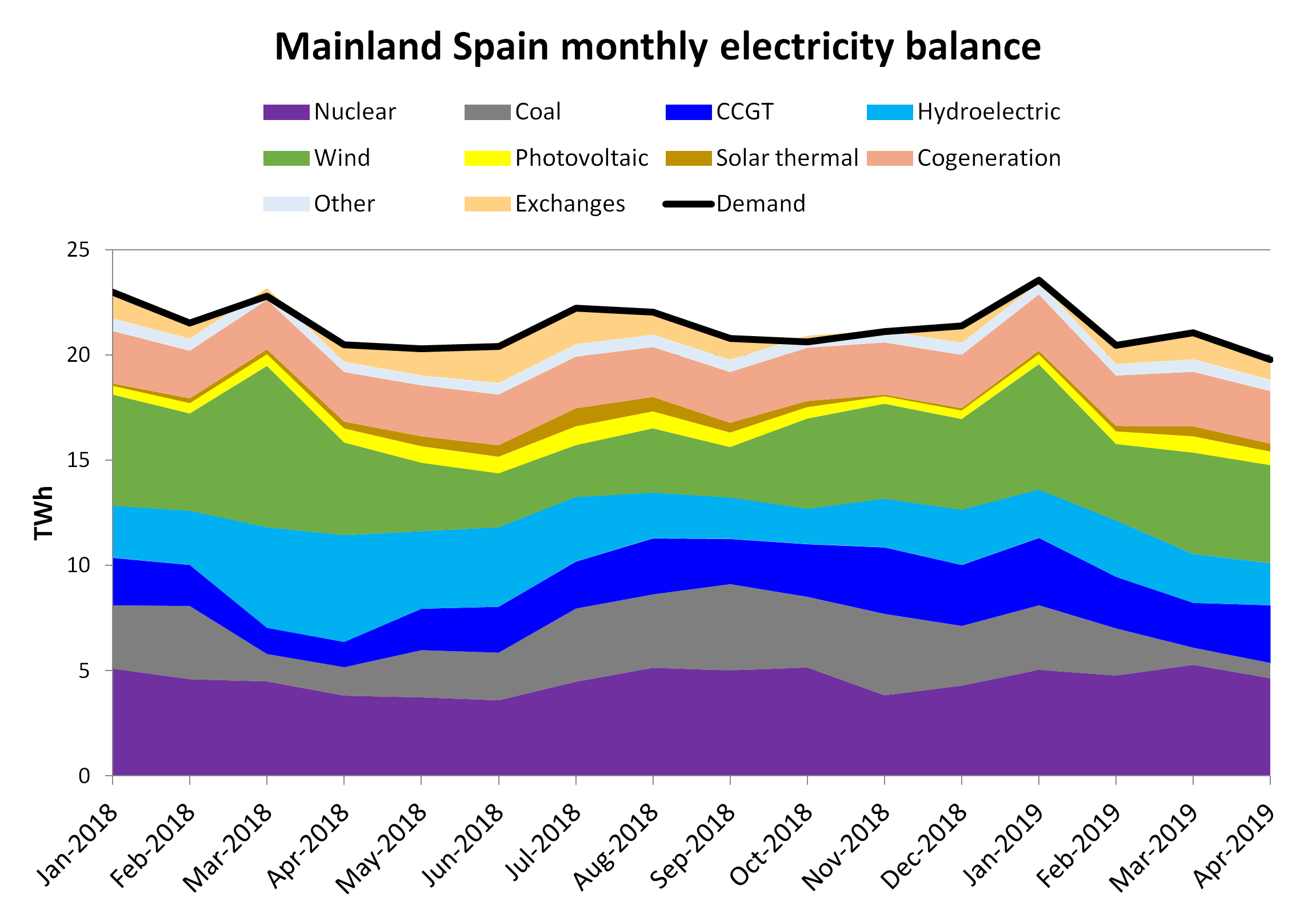 In April, the hydroelectric reserves were 19% below those of April last year. According to data from the Hydrological Bulletin published by the Ministry for Ecological Transition, this week the reserves increased 512 GWh compared to last week, currently being 11 851 GWh, which represents 51% of the total capacity.

PrevAnteriorNuclear energy: fifty years at the base of the Spanish electricity mix
SiguienteElectricity prices in Europe between 4% and 5% higher in April due to CO2Next
Menu
Facebook-f Twitter Linkedin Instagram