Nuclear energy: fifty years at the base of the Spanish electricity mix

AleaSoft, April 30, 2019. Nuclear energy in Spain already has five decades of history and a nuclear power outage agreement that grants another decade and a half more life. AleaSoft analyses the role of nuclear power plants in the generation mix and in the electricity market in the past and the one that is expected in the future.

Spain is the 12th country in the world in number of operational reactors with seven, sharing position and number of reactors with Belgium and Germany. Nuclear energy, with its defenders and detractors, has been at the base of Spanish electricity production for the last fifty years. The seven reactors currently in operation, together with the three in the process of being dismantled, have produced more than 1,600 TWh of electricity in the last thirty years. This represents more than 26% of the total electricity demand in mainland Spain. This amount of energy produced is only comparable with the production of the coal-fired power plants that dominated the energy mix in the last decades of the past century, or with the production of the gas combined cycles during its short golden period between 2005 and 2011

Nuclear generation has always been among the technologies with the largest share in the generation mix of mainland Spain. Until 2005, coal and nuclear power clearly dominated electricity generation and covered more than the half of the mix in almost equal parts. From 2006, the gas combined cycles came into force, displacing coal and leaving nuclear participation in second place. But as of 2011, with the continued fall in demand due to the economic crisis and the increase in renewable production, the nuclear energy production regained the first place that since then is disputed year after year with the wind energy. 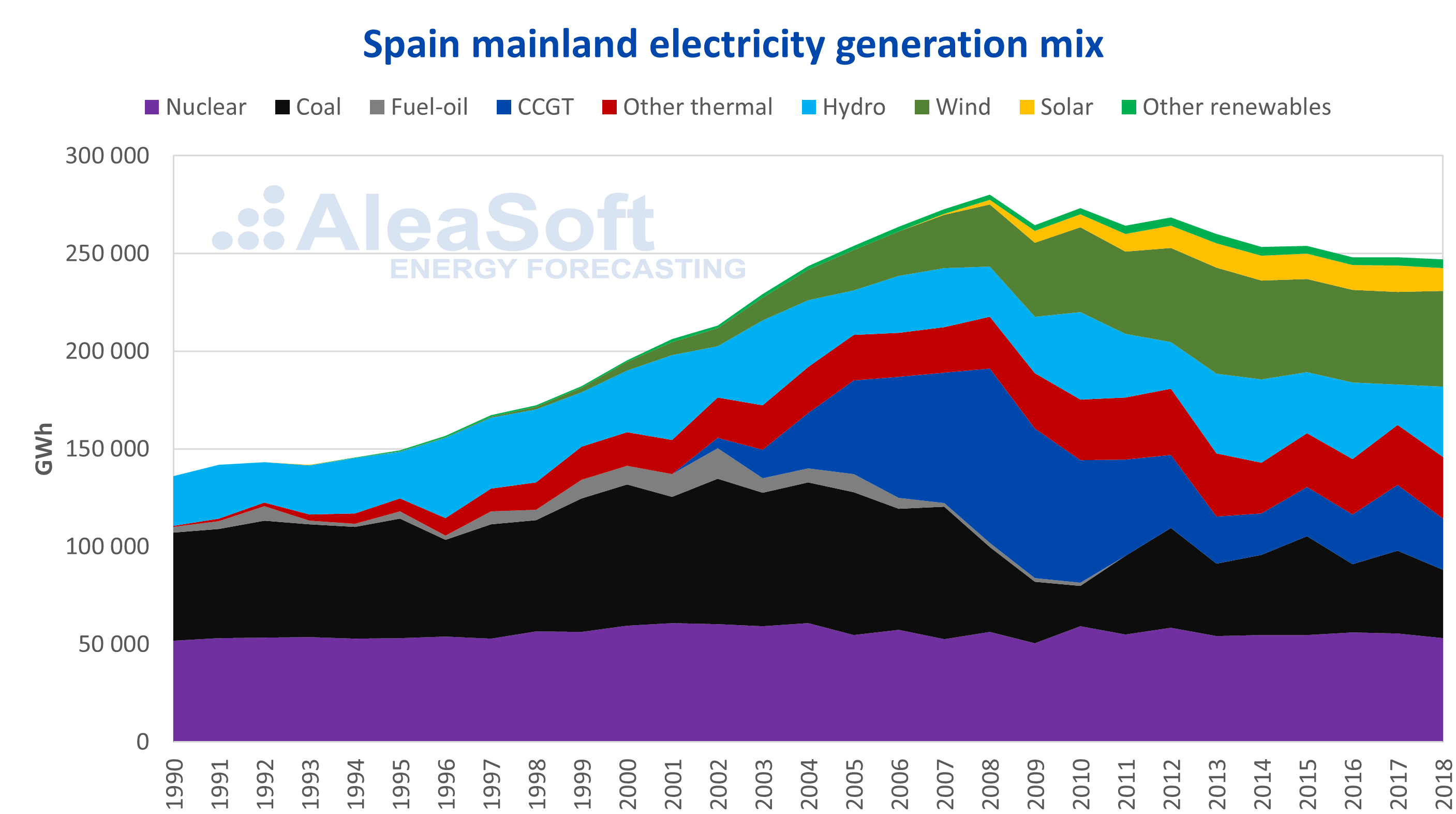 Now, while coal and gas are giving way to renewable energies, nuclear energy continues to be present in the base of the mix, covering almost 20% to 25% of mainland Spanish electricity demand during the last fifteen years.

Nuclear energy production in Spain has always been characterised by its regularity. Nuclear generation is a base production that is practically not affected by any external variable (neither demand, nor meteorology, nor price of CO2, …) only by its own stops, whether programmed or fortuitous. This characteristic, which clearly is an advantage for its constancy as a base production and for the predictability of the energy produced, has also been a source of criticism for its lack of flexibility to adapt to changes in the demand.

Almaraz and Trillo are the most constant nuclear power plants in Spain, with almost 90% of the time operating at full power. In addition, the first Almaraz reactor has recently been classified as the safest and most reliable in Europe by the World Association of Nuclear Operators (WANO). At the other end we have the number two reactor of Vandellós, which is the one that experiences the most intermittency in its production (scheduled and unscheduled stops) and that does not reach 80% of the time connected to maximum power. Even so, these performance values are unimaginable for any other technology in the Spanish mix. 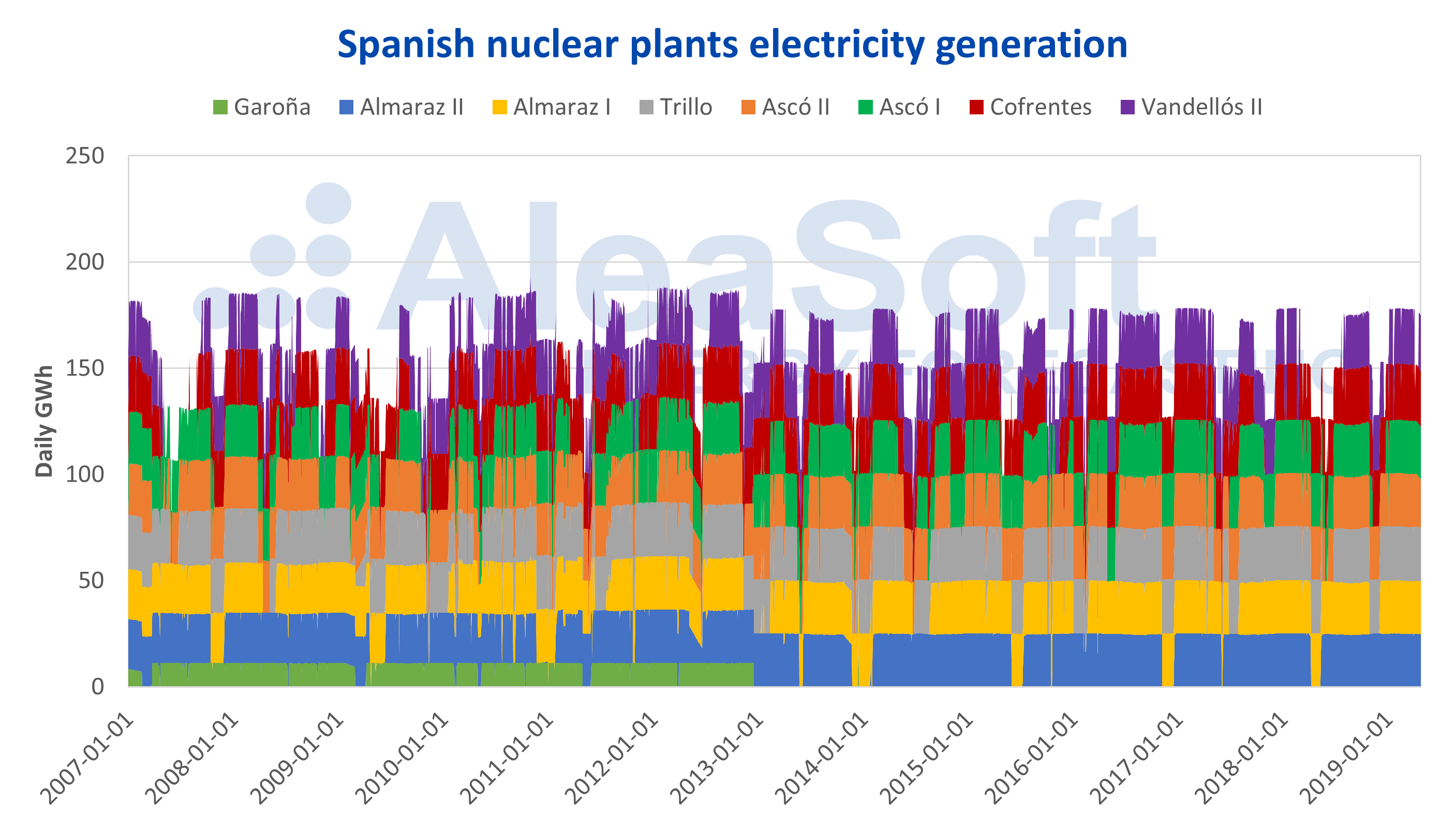 The inflexibility of the nuclear power plants production is not an inherent characteristic of nuclear technology. In France, the 58 nuclear reactors track load during the day, adapting at every moment to the electricity demand curve. And also in Spain there have been episodes where nuclear energy had to reduce its power due to lack of demand. On the Holy Friday in 2013, Red Eléctrica de España (REE) ordered a reduction in nuclear power by 20% due to the abundant wind and hydroelectric energy production at that moment, combined with the low demand during Holy Week.

Nuclear energy is offered at a zero price in the wholesale electricity market. This bid strategy is given by the low flexibility of the plants and the costs associated with power changes, stops and starts. It is often confused that nuclear offers its energy very cheaply with its costs being very low, since they are already amortised. This is a wrong conclusion. Although all the nuclear power plants in Spain are more than thirty years old, the subsequent recurrent investments in safety and performance improvements are very important.

Based on a study conducted by AleaSoft, it is estimated that the current costs of nuclear energy production in Spain are between 40 €/MWh and 50 €/MWh, between variable costs, including fuel (between 4 and 5 €/MWh), 0.5 €/MWh that REE tolls and fees on waste; and the fixed costs (between 20 and 25 €/MWh) of personnel, maintenance and operation; plus the 7% tax on the generation. That is why, even offering its energy at zero price, with a market price lower than its costs, nuclear production would enter losses. It should also be borne in mind that a plant with more unscheduled shutdowns will increase its fixed costs by being able to distribute them among less MWh produced, plus the additional costs involved in stops and repairs.

The generation of electricity from nuclear energy is governed by a conceptually simple principle: take advantage of the energy released during the fission of the nuclei of the uranium atoms to heat the water that floods the reactor to power a turbine that generates electricity. This process has two qualities that make it interesting in the face of the fight against climate change: on the one hand, the waste generated is controlled and not released to the atmosphere or the environment, and, on the other hand, does not generate emissions of greenhouse gases such as CO2.

Although nuclear energy is taken into account in the plans of many governments and groups of experts as a tool for combating global warming, it does not have such a good reputation among many environmental groups. These lobbies wield against nuclear power problems such as the extremely long duration of the radioactive activity of the waste, the disastrous consequences in case of an accident and the high costs of construction, maintenance and dismantling of the power plants.

The future of nuclear energy in Spain is currently quite well defined and the nuclear shutdown has a very clear deadline: 2035. The companies that own nuclear power plants in Spain have agreed a closure schedule with the National Nuclear Waste Company (Enresa). That the closure of the nuclear power plants has been agreed between all parties and planned well in advance is undoubtedly good news for the electricity market, which needs stability, planning and progressive changes. The base and stable production of the nuclear energy should be replaced by renewable energies with the backing of the gas, and this transition must be made progressively so as not to provoke shocks in the market and the price.

According to the agreed timetable, the first power plant to close will be Almaraz with its two reactors in 2028. It will be followed by Ascó, Cofrentes and Vandellós. And the last one will be Trillo’s in 2035. If this calendar is met, nuclear energy will have been present in the electric mix for almost seventy years since the José Cabrera power plant, better known as the Zorita power plant, was commissioned in 1968. 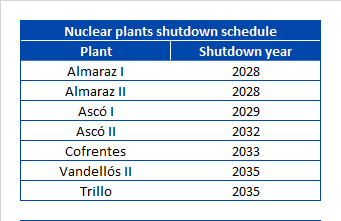 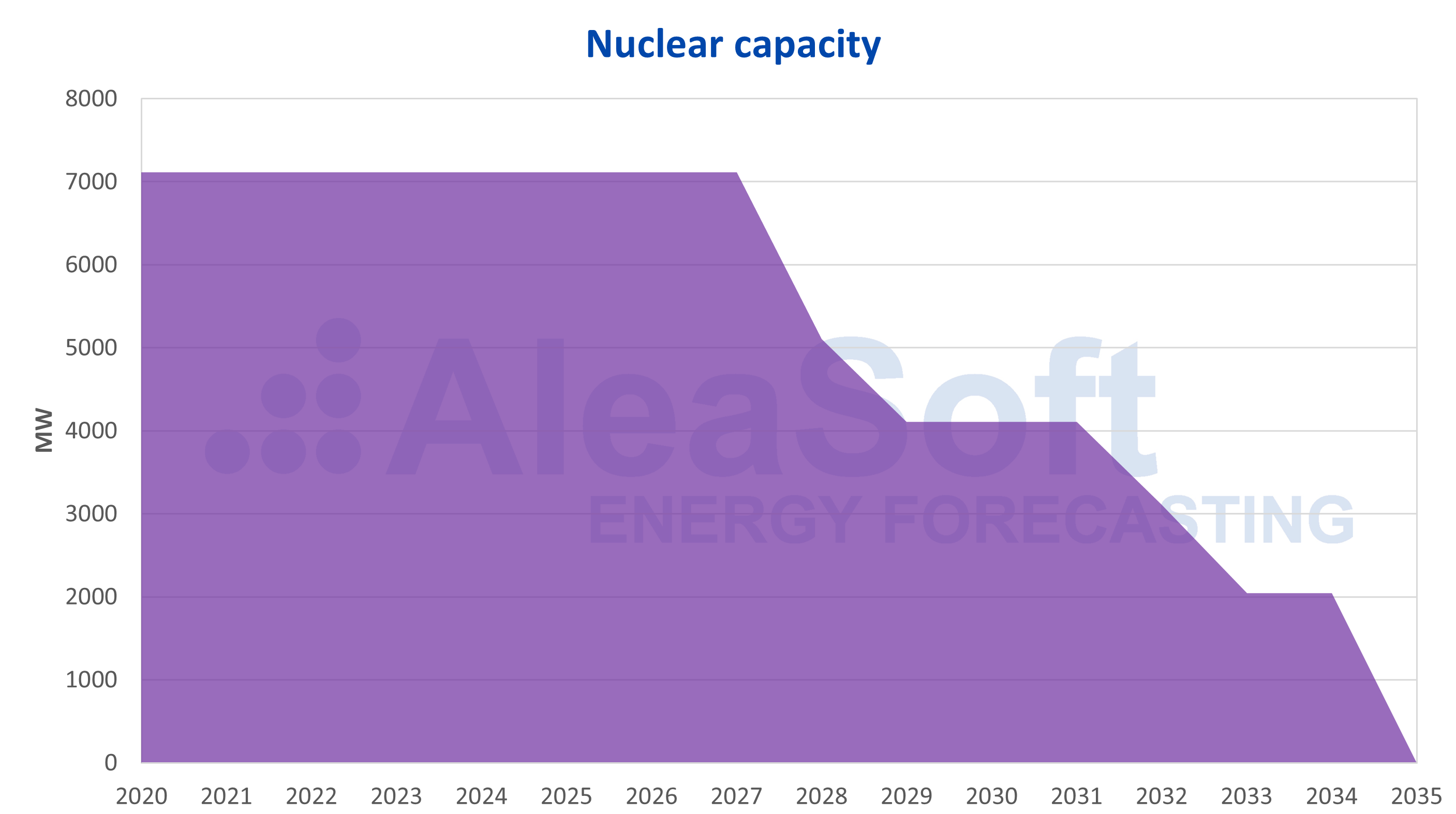 A review of the nuclear power plants in Spain would not be complete without commenting on some of the most serious problems that power stations in the Iberian Peninsula have suffered. The most serious nuclear accident in the history of Spain occurred in the number one reactor of the Vandellós power plant. A fire at the facilities on October 19, 1989 seriously affected the safety of the reactor and was declared a level 3 incident on the INES international scale, without leakage of radioactive material outside. Rehabilitation and safety improvements were so expensive that it was decided to close it definitively.