AleaSoft, June 22, 2020. The beginning of summer came accompanied by an increase in temperatures at the European level. At the same time, the restrictions imposed to control the expansion of the coronavirus continue to be relaxed. Both factors will favour the increase in electricity demand in the fourth week of June. In the electricity markets, the prices will remain around €30/MWh, although in general they will be lower than in the third week of the month due to the recovery of the renewable energy production.

The solar energy production during the week ended on Sunday, June 21, was 16% higher in the French market compared to the previous week. In the Portuguese market it increased by 13% and in the Spanish by 12%. In the Italian and German markets the increases were 8.0% and 8.5% respectively.

During the 21 days since June, the solar energy production was 42% higher in the Spanish market compared to the same period in 2019. In Portugal it increased by 13%, and in France and Italy by 1.4% and 0.7% respectively. On the contrary, in the German market it decreased by 14%.

For the fourth week of June, the AleaSoft‘s solar energy production forecasting indicates a significant increase in the German market compared to the values registered last week. A slight increase is also expected in the Italian market, while the production with this technology is expected to decrease in the Spanish market. 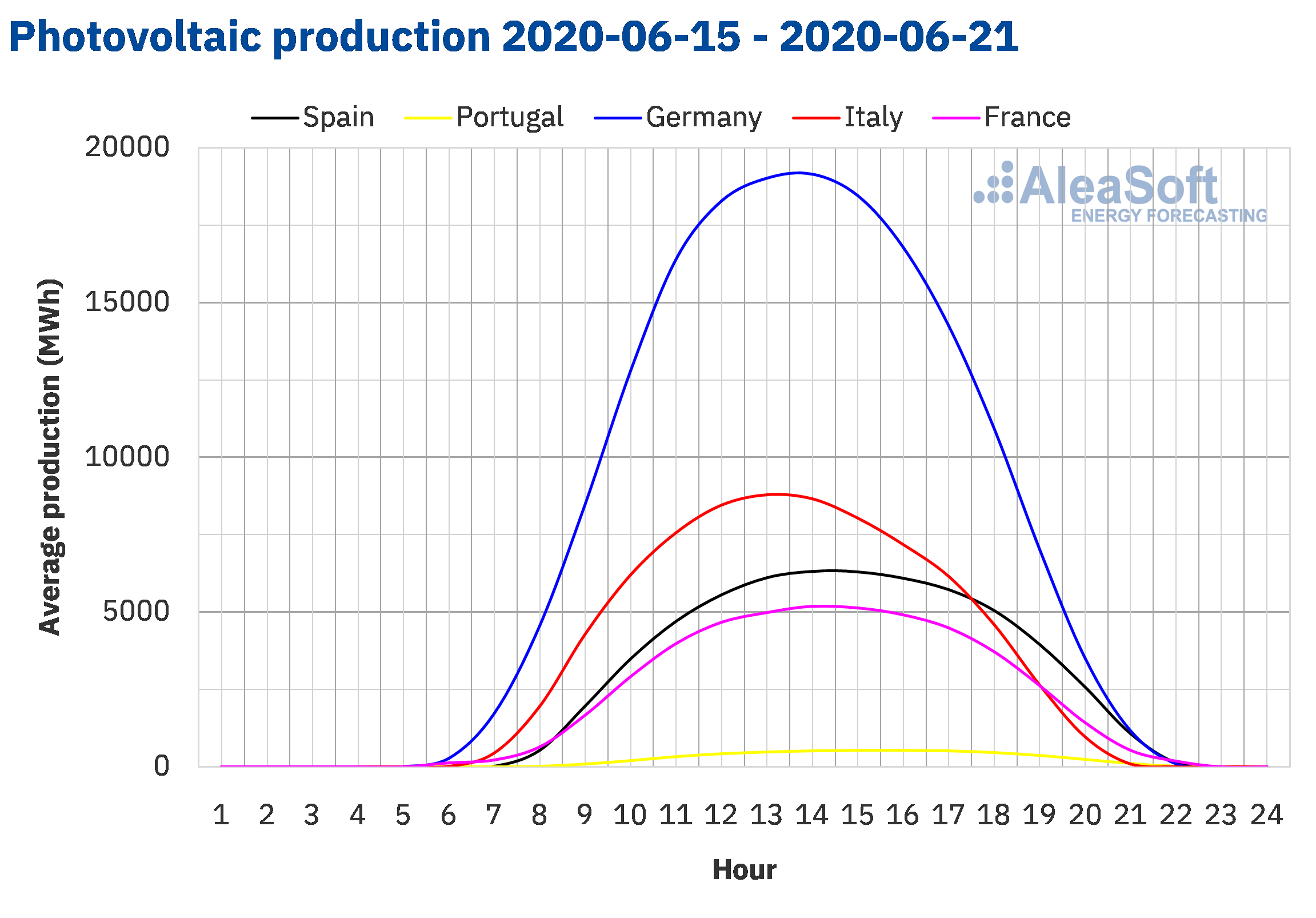 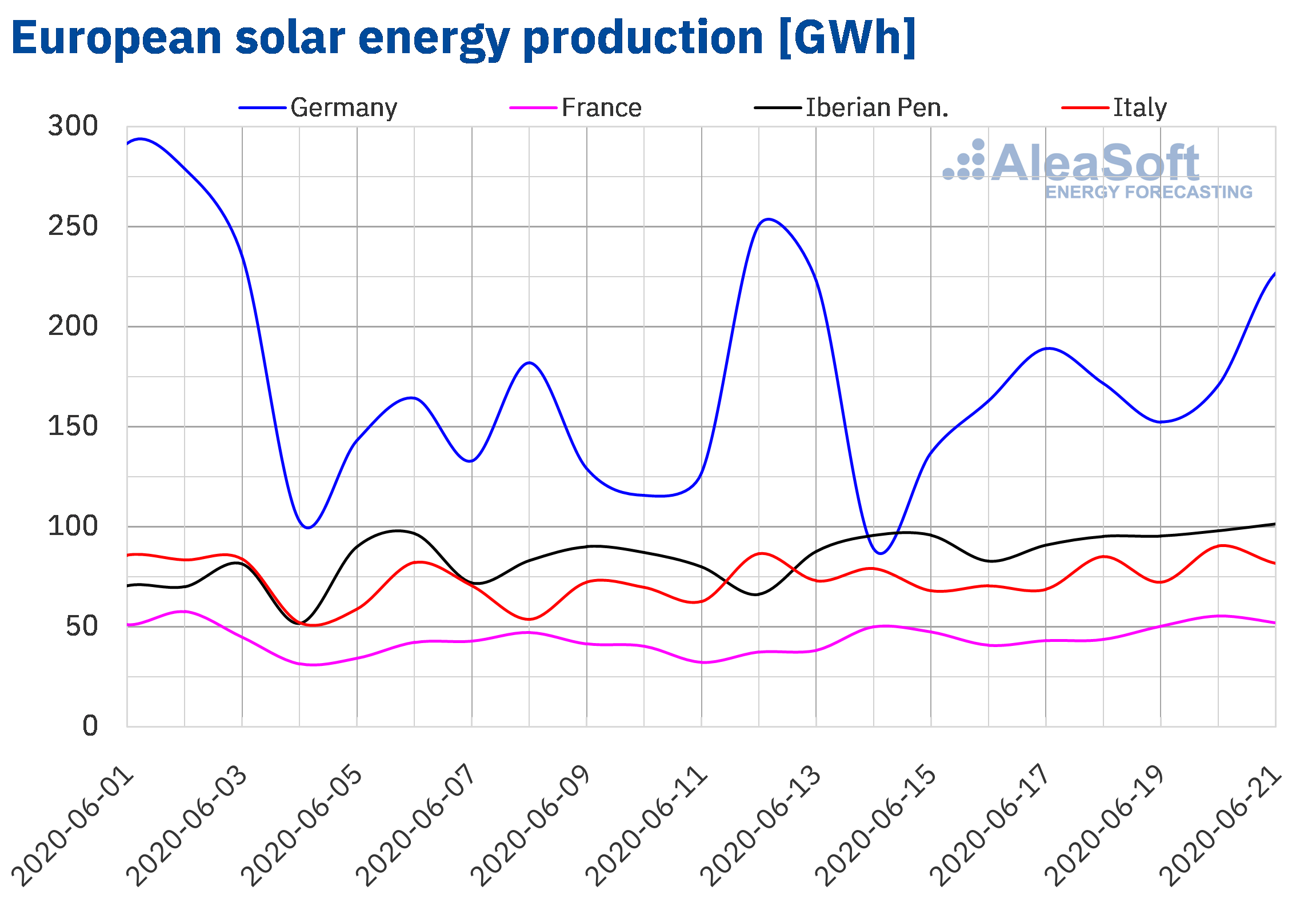 During the past week, the wind energy production decreased in most of the markets analysed at AleaSoft compared to the previous week. In the Iberian Peninsula it decreased by 49%, while in the German and the French markets it decreased by 33% and 31% respectively. The exception was the Italian market in which the production increased by 7.1% last week.

So far in June, the wind energy production was 122% higher in the Italian market compared to the same days of 2019. In Spain it increased by 3.6% and in France by 0.9%. In contrast, in the Portuguese and the German markets, the production with this technology decreased by 12% and 6.3% respectively. 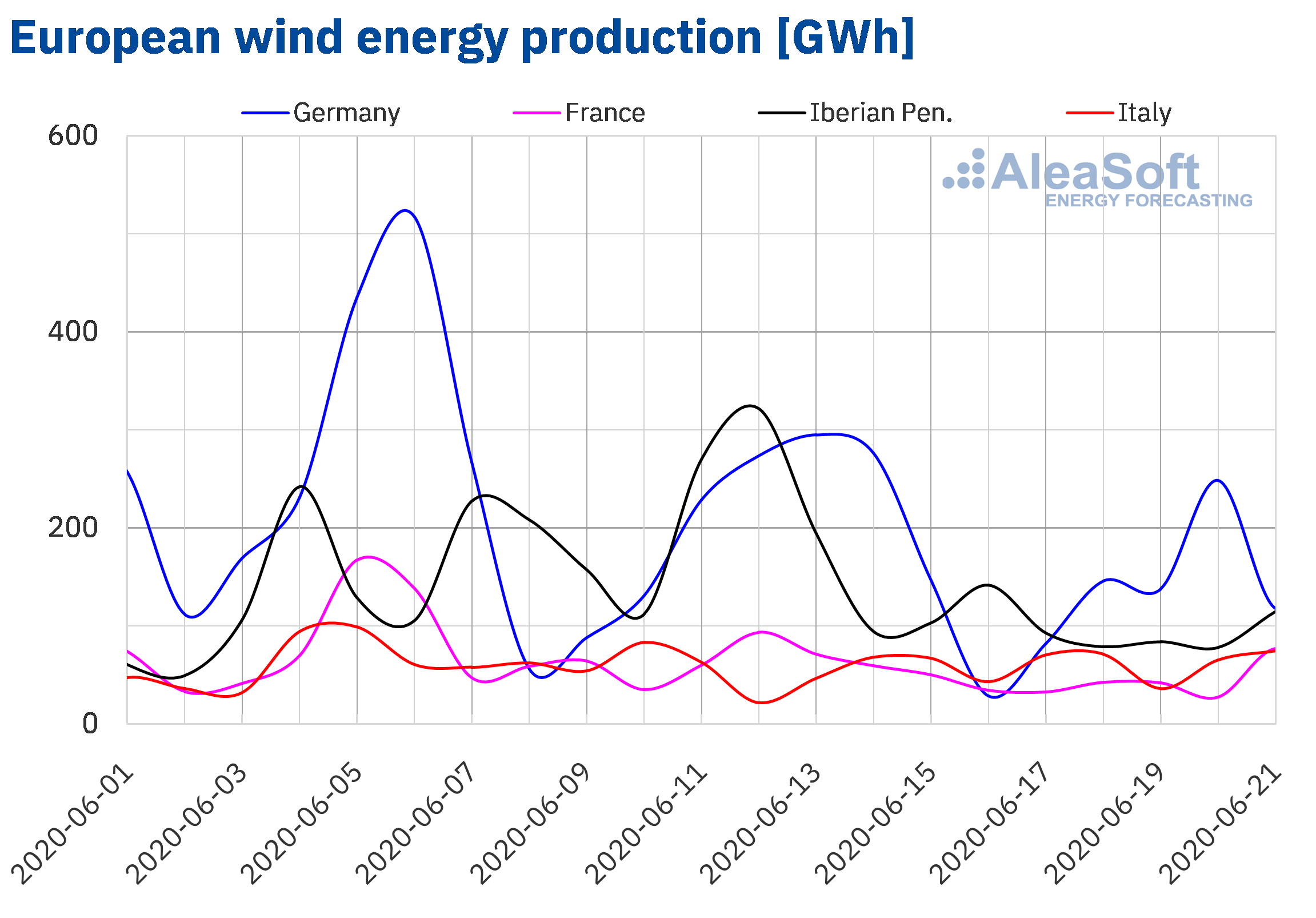 The electricity demand during the week of June 15 had an increase in most of the analysed European markets compared to the week of June 8. In the case of Germany and Portugal, the effect of the Corpus Christi holiday, which was celebrated on June 11, was the main cause of the demand in these markets increasing by 2.6% and 5.5% respectively. In Spain, the demand recovered 2.8% due to the de‑escalation of the measures taken during the state of alarm because of COVID‑19, which meant that most of the territory is already in the third phase since Thursday, June 18. In Italy, where since June 3 the borders were reopened and free movement was allowed, the demand during the analysed week increased by 3.0%. The demand of the Netherlands was the one with the smallest increase, of 0.1%. 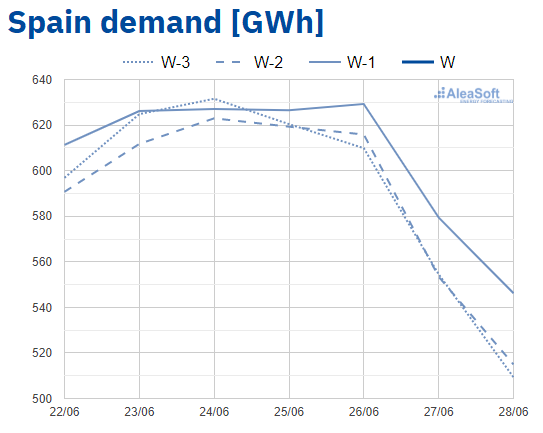 On the other hand, in France, Great Britain and Belgium the electricity demand registered falls of 0.7% and 1.1% respectively.

For this week the AleaSoft’s electricity demand forecasting indicates a recovery in demand in most of Europe, where the elimination of the mobility restrictions continues. In addition, the arrival of summer coincided with an increase in temperatures that will also favour the increase in demand. 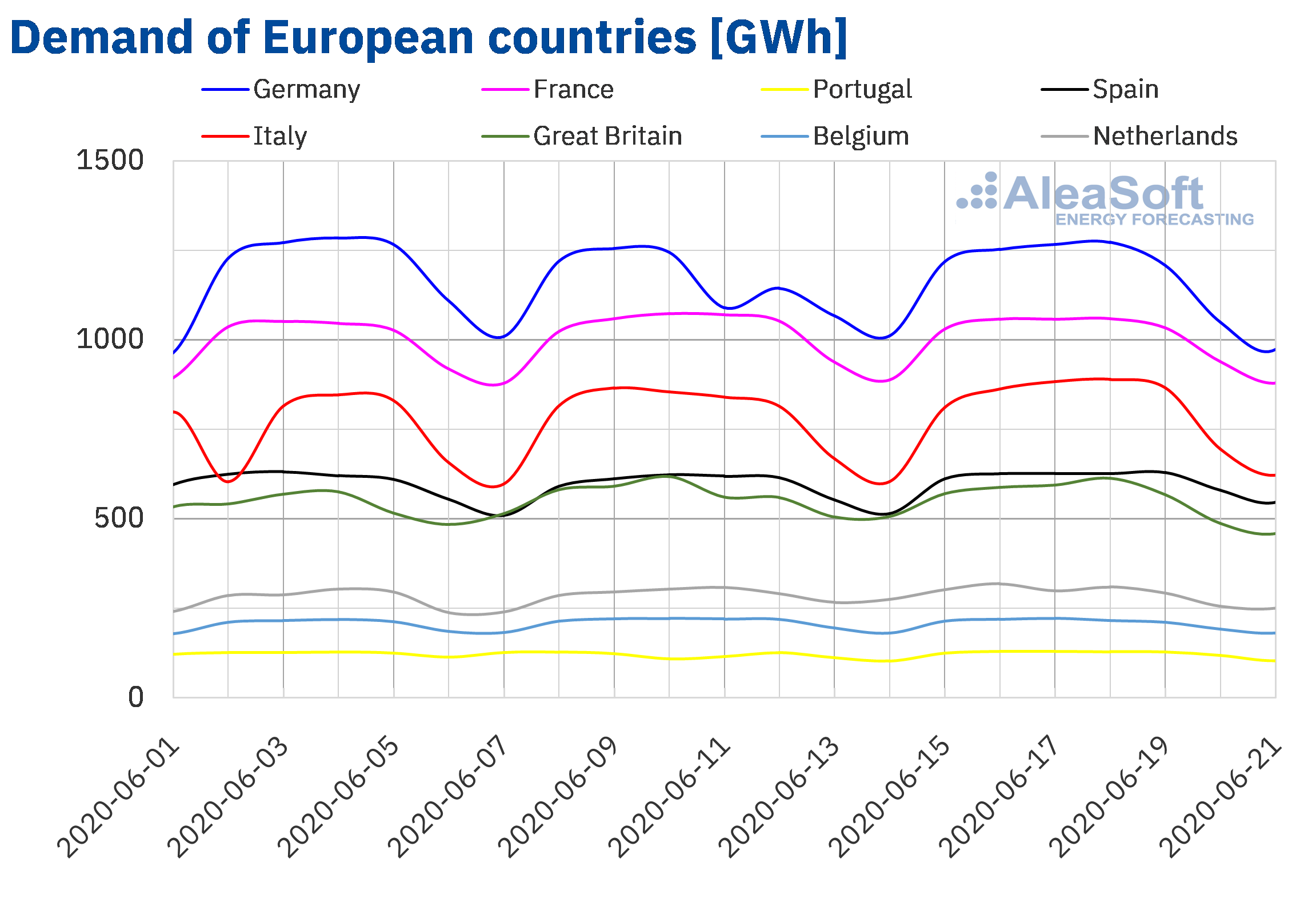 The week of June 15, the prices increased in all the analysed European electricity markets compared to those of the previous week. The market with the highest price increase, of 25%, was the MIBEL market of Spain and Portugal, followed by the Nord Pool market of the Nordic countries with an increase of 24%. While the market where the price rose the least, by 0.2%, was the N2EX market of Great Britain. In the rest of the markets, the increases were between 9.6% of the IPEX market of Italy and 17% of the EPEX SPOT market of France. These price increases were favoured by the decrease in wind energy production in most European markets.

On the other hand, the highest daily price for the week of June 15, of €37.24/MWh, was reached on Wednesday, June 17, in the EPEX SPOT market of Germany. This price was the highest in this market since early March. 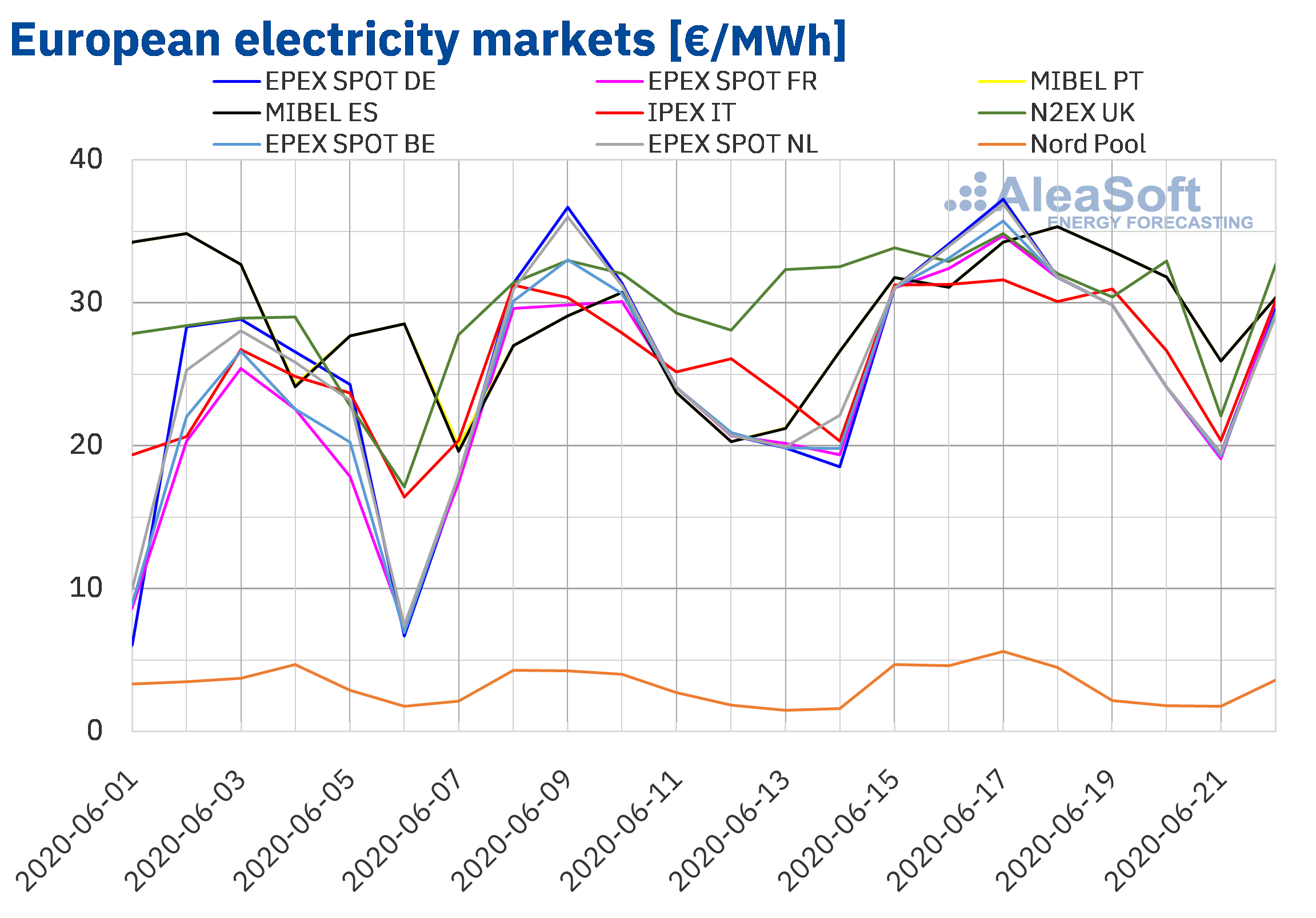 The AleaSoft’s price forecasting indicates that this week of June 22, the prices will fall in most of the analysed markets due to the recovery of the renewable energy production. The exceptions will be the EPEX SPOT market of Belgium and France and also the IPEX market of Italy, where a significant decrease in wind energy production is expected. In general, the prices will continue around €30/MWh.

During the third week of June, the prices for the product of the next quarter increased in most of the European electricity futures markets analysed at AleaSoft. Out of this increase were the ICE and NASDAQ markets of the Nordic countries, which had a decrease of approximately 12% and a settlement price of €11.78/MWh in the session of Friday, June 19, for both markets. In the rest of the markets, the increases between the sessions of June 12 and 19 were between 3.5% of the EEX market of Italy and 8.5% of the ICE market of the Netherlands.

On the other hand, the futures for the year 2021 also registered increases in the prices of the different markets analysed at AleaSoft. Also in this case, the prices of the Nordic region decreased both in the ICE market and the NASDAQ market by 0.7% and 0.4% respectively. Meanwhile, in the rest of the markets the prices for this product increased. The EEX market of Great Britain was the one with the highest increase, of 5.1%, in the settlement price of Friday, June 19, with respect to the settlement price of the session of June 12.

The Brent oil futures prices for the month of August 2020 in the ICE market, the week of June 15, followed an upward trend, with the exception of Wednesday, when they fell by 0.6%. As a result of this trend, a settlement price of $42.19/bbl was reached on Friday, June 19. This price was 8.9% higher than that of the previous Friday and the highest in the last two weeks.

The TTF gas futures prices in the ICE market for the month of July 2020, the third week of June, remained above €5/MWh. That week’s settlement prices were higher than those of the same days of the previous week, including Tuesday and Wednesday, when declines were registered. The weekly maximum settlement price, of €5.62/MWh, was reached on Friday, June 19. This price was 6.5% higher than that of the previous Friday and the second highest so far this month, after the price of €5.71/MWh of Friday, June 5.

Regarding the TTF gas prices in the spot market, they also remained above €5/MWh during the past week. On Tuesday, June 16, the maximum index price of the week, of €5.35/MWh, was reached. This price was 4.0% higher than that of the previous Tuesday and the highest since the first half of May. After registering declines on Wednesday and Thursday, the last days of the week of June 15, the prices rose again to reach an index price of €5.27/MWh for the weekend. For Monday, June 22, the recovery continued and the index price was €5.40/MWh.

Regarding the CO2 emission rights futures prices in the EEX market for the reference contract of December 2020, they increased most of the days of the week of June 15. The largest daily increase, of 7.6%, was that of Thursday, June 18. This allowed a settlement price of €24.47/t to be reached, 9.9% higher than that of the previous Thursday and the highest since the last week of February. On Friday, there was a decrease of 1.3%, but the settlement price, of €24.16/t, was still 9.8% higher than that of the previous Friday. 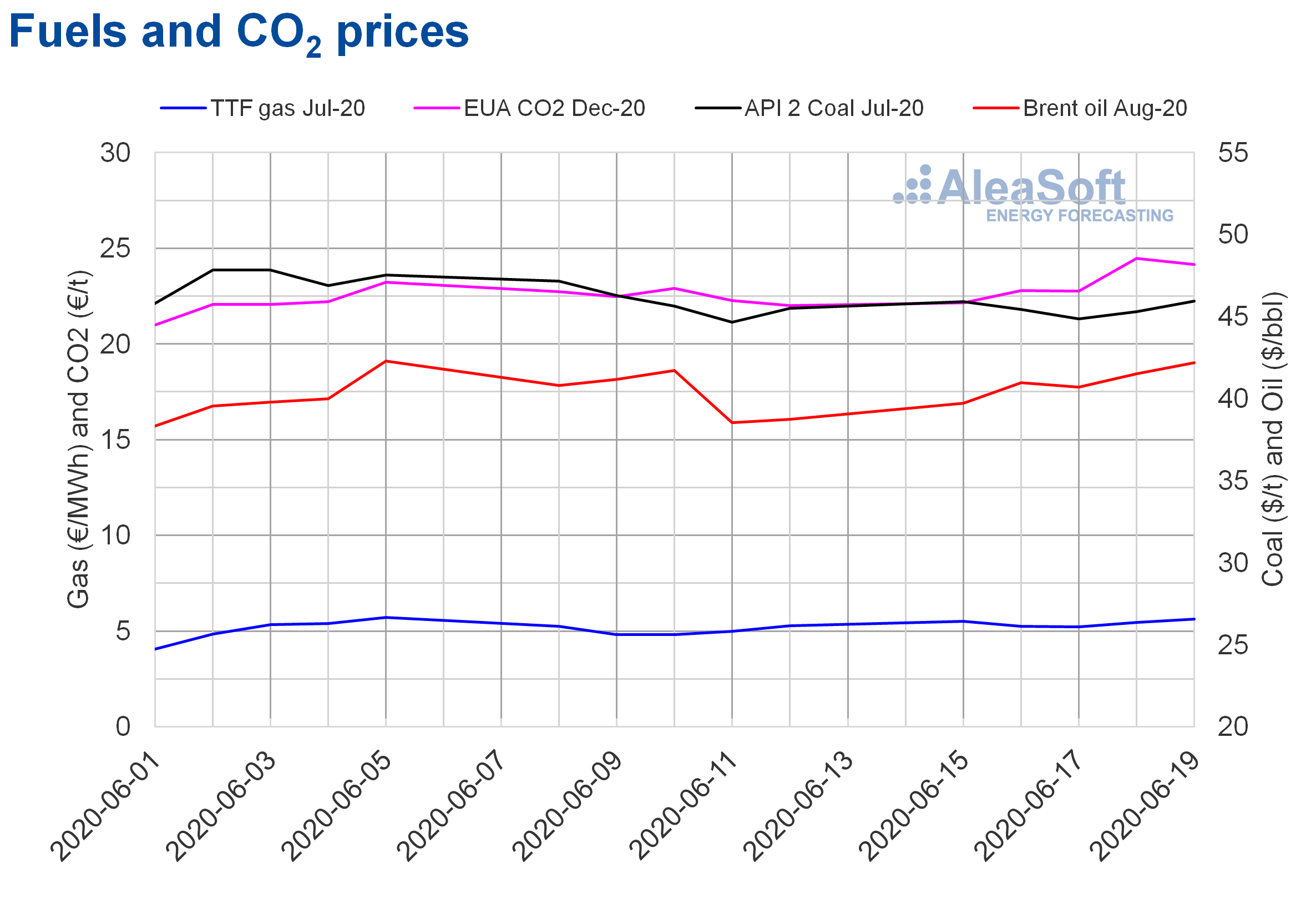 This Thursday, June 25, the webinar “Influence of coronavirus on electricity demand and the European electricity markets (III)” organised by AleaSoft will be imparted. This is the third part of a series of webinars that were held since the beginning of the COVID‑19 crisis, in which the evolution of the energy markets and the financing of the renewable energy projects during this period were analysed. On this occasion, the consequences that the pessimistic growth scenarios of the economy and the possible new outbreaks of the epidemic might have on the markets will also be discussed.

The speakers will be:

The AleaSoft’s observatories, which include information on the main European electricity markets and the fuel markets, can also be consulted to analyse the evolution of the energy markets.