July 23rd, 2015– Electricity prices in the main European wholesale markets were higher in the first half of 2015 than in the same period of 2014. The only exception was the EPEX SPOT – Phelix market, whose average price was slightly lower. A descending price trend between February and May 2015 can be observed in this market, as well as in the markets for France and Italy. On the other hand, in Spain and Portugal prices were clearly influenced by the low hydroelectric production. 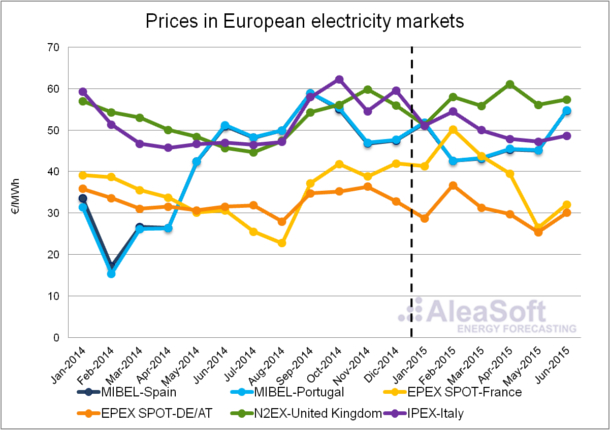 During the first half of 2015, the average price in the Italian market IPEX was 49.83 €/MWh, only 0.37 above the average in the same half of the previous year. As well as in the EPEX SPOT analysed market, there is a declining price trend between February and May. In terms of monthly average price, the greatest year-on-year variation was in January (-8.17 €/MWh) because prices were especially high in January 2014.

Price of fuels for electricity generation

The behaviour of the CIF ARA European coal price during the first six months of 2015 was relatively stable around the average value of 59.76 $/t. This value was 15.60 $/t lower than the average price during 2014. 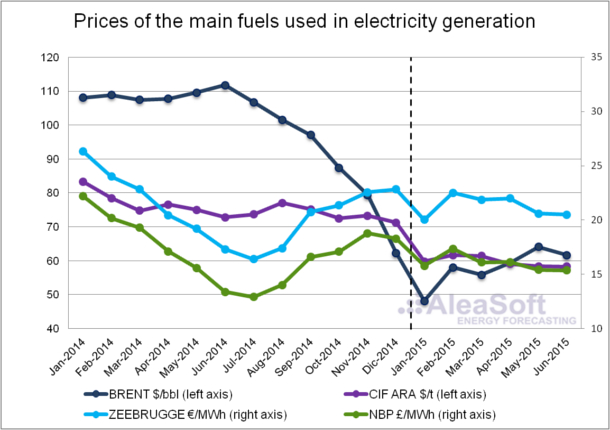 For the second half of 2015, AleaSoft forecasts indicate a small increase in the Brent barrel price together with the Zeebrugge gas price and the NBP gas price. On the other hand, price of CIF ARA coal is expected to be slightly lower.

The CO2 emission rights price had a slightly ascendant behaviour during the first half of 2015, reaching a monthly average price of 7.47 €/t in June, 0.50 €/t more than the average price in December 2014. 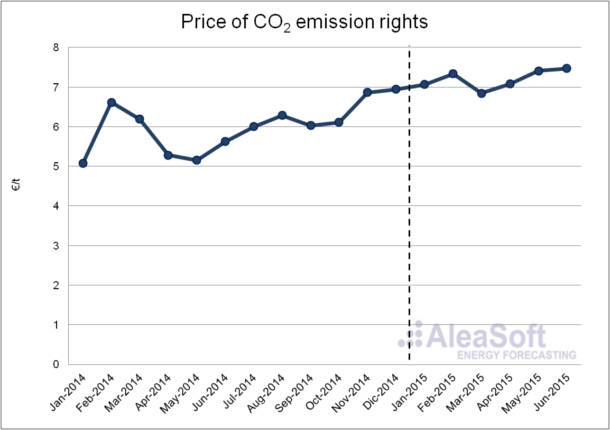 Following Aleasoft’s forecasts, the CO2 emission rights will be stable during the second half of 2015.