The price increase of electricity in the wholesale market has been influenced by several factors. Amongst them are the drop in hydraulic production, the price increase of fuels, the stagnation of installed wind power and the downturn of production in combined cycle plants – registering a historical minimum utilisation factor.

Following the historical maximum values of hydraulic production registered in 2010, which caused the price to drop in January of 2010, hydroelectric plants are producing around 25% less electricity in 2011. This has kept the price on the same level. 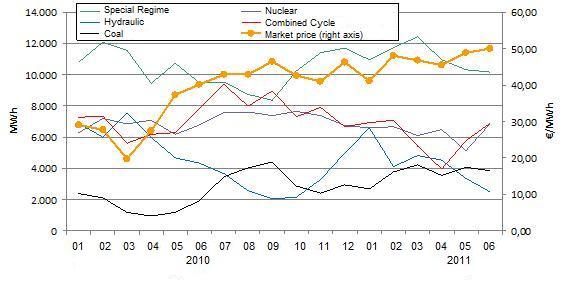 The geopolitical conflicts that took place in North Africa during the early part of this year and that influenced some of the main gas and oil-producing countries are other contributing factors of this price increase experienced in the first half of 2011. These conflicts caused restrictions in the supply of gas and oil, whose prices increased in international markets. 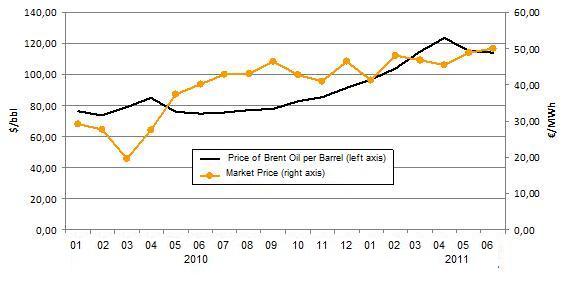 Halt in the installation of new wind farms

According to the National Energy Commission, not one MW of wind power has been installed in Spain during the first half of 2011. According to the REE (Red Eléctrica de España, S.A.), the power installed was 145 MW. In any case, after having installed an average amount of 2,000 MW per year since 2007, this information clearly shows stagnation in installed wind power. Due to wind power being a non-controllable energy source and paid by means of bonuses, wind production tends to lower the price of electricity in the market.

Downturn in the production of combined cycle plants

Since the coal decree came into effect, the capacity factor of coal-based thermal plants has increased. This has influenced the use of combined cycle units in a negative way, which have also been affected by the price increase of natural gas due to the political instability present in the producing countries. 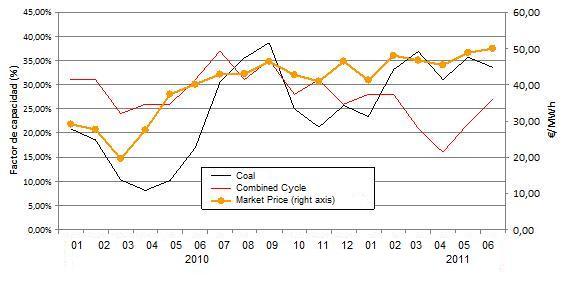 The coming into effect of the coal decree in February, which regulates national production and determines the minimum consumption of national coal for plants part of the restrictions procedure of guarantee of electricity supply, has also had other effects on the price of electricity in the wholesale market. Fixing the compensation for the energy produced by these thermal plants has resulted in a tendency of the market price to align with the price set by the plants assigned with higher production. In fact, the production of electricity using coal set the marginal market price on 41% of the hours in July, overtaking hydraulic generation – which had registered the most hours up to that moment.

Estimate for the second half of 2011

The result of the CESUR auction for the third quarter of 2011, which sets the price at which the electricity is purchased for consumers of the last resort tariff, was 53.20 €/MWh for the base-load product. The products in the futures market to be closed in the second half of this year show prices above 52 €/MWh. Aleasoft’s estimates for the daily market price of electricity indicate that the monthly averages will be between 48 and 52 €/MWh. 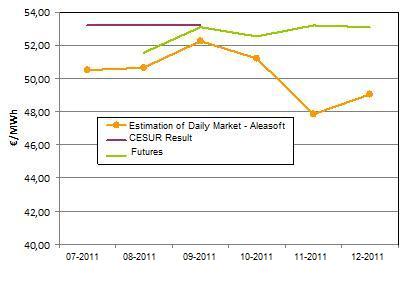