CO2 must reach a balance that favours the development of renewable energies, but without affecting large consumers

AleaSoft, June 25, 2021. The CO2 emission rights registered an escalation in prices in recent months that caused price rises in all European electricity markets. The CO2 emission rights should be a stimulus to displace the most polluting technologies, but without weighing down the competitiveness of consumers, a signal that is achieved with prices around €25/t. AleaSoft sends a firm message to the Government and the European Union to regulate CO2 prices.

The CO2 emission rights gained a major role in recent months due to the significant increase in their prices, which, together with high gas prices, led to an increase in prices in all European electricity markets.

A little bit of history

The CO2 emission rights are negotiated through the European Emissions Trading System (EU ETS), which began in 2005 as an instrument to incentivise the greenhouse gas emissions reduction, penalising the technologies and industries that pollute the most. The European Union organised the EU ETS in negotiation periods, or phases, which have been four so far.

The first phase took place between 2005 and 2007. Although for several months of 2005 and 2006 prices were above €20/t, the excess supply caused by the over‑allotment of EUA, together with the fact that these rights were dated expiration date, caused prices to begin to fall from May 2006 until reaching values close to zero in 2007.

The second phase comprised the period from 2008 to 2012. In this phase, the quantities of EUA securities were adjusted and prices rose again above €20/t. But, the arrival of the economic crisis and the increase in renewable energy production and energy efficiency had as a consequence the drop in prices, which were between €12/t and €14/t between 2009 and the first part of 2011 and between €6/t and €8/t in 2012.

The third phase covered the years 2013 to 2020. This phase began with an oversupply of EUA and the price per ton did not rise above €10 until March 2018. From that moment on, prices began to rise almost uninterruptedly, with the exception of the fall they registered at the beginning of the COVID‑19 pandemic.

On January 1, 2019, the Market Stability Reserve (MSR) came into operation, a mechanism that aims to regulate the supply of rights in the market, so that a reasonable surplus of rights is always circulating for liquidity, but without prices plunging.

The fourth phase is currently being developed, which began in 2021 and will run until 2030. This phase began with a rise in prices to the all‑time highs registered in April, when they exceeded €56/t. Among the main causes of this rise is the existing speculation in this market, encouraged by the expectations of an increase in prices. Another fact that favoured the price escalation was the increase in the demand for emission rights in April because the companies had time until the end of that month to deliver the emission rights corresponding to 2020. 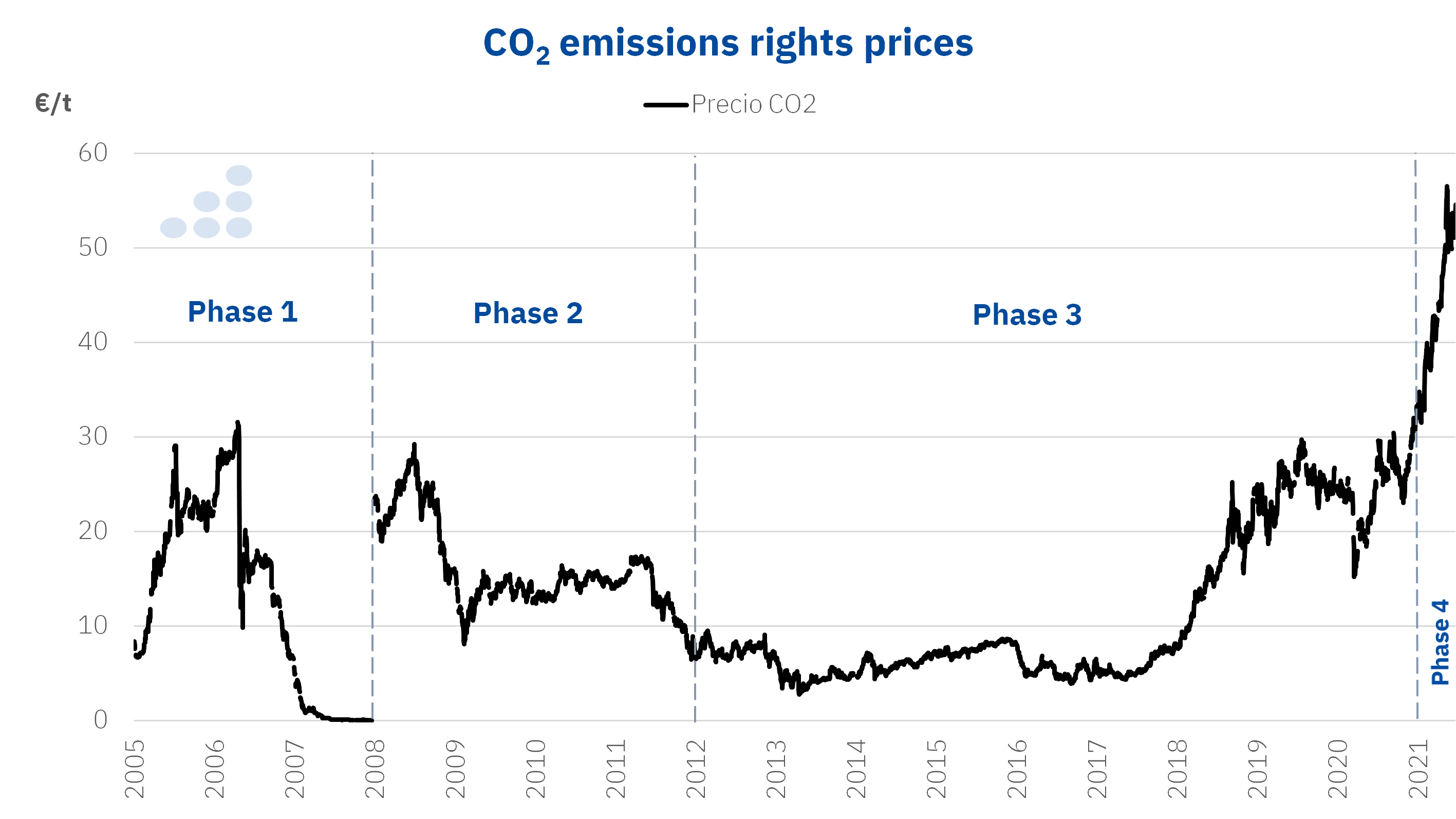 What would happen if the CO2 emission rights prices fell to zero?

If CO2 prices fell to €0/t, the electricity generation plants that pollute the most would have lower production costs and their offers in the electricity market would be at a lower price, increasing the possibility of matching in the market and therefore of producing, with the consequent increase in polluting and greenhouse gas emissions. In addition, in these circumstances, market prices would fall, which would discourage the development of renewable energies and jeopardise the objectives of the energy transition.

What would happen if the CO2 emission rights prices remained above €50/t or continued to rise?

In this case, the electricity markets prices throughout Europe would remain high and could even continue to rise. This would be very detrimental to large and electro‑intensive consumers, whose competitiveness would be greatly affected and it would put them in a very difficult situation. In addition, the recovery from the economic crisis would be put at risk.

Need for a regulated balance of CO2 prices

AleaSoft reminds once again that there must be a regulated balance of CO2 prices that allows meeting the objective of displacing the most polluting technologies, but without affecting consumers. With prices around €25/t, it is enough to favour renewable energies and not harm consumers. In fact, it was seen that, with prices at this level, in Spain it was achieved that the coal energy production plays a marginal role in the electricity generation mix. 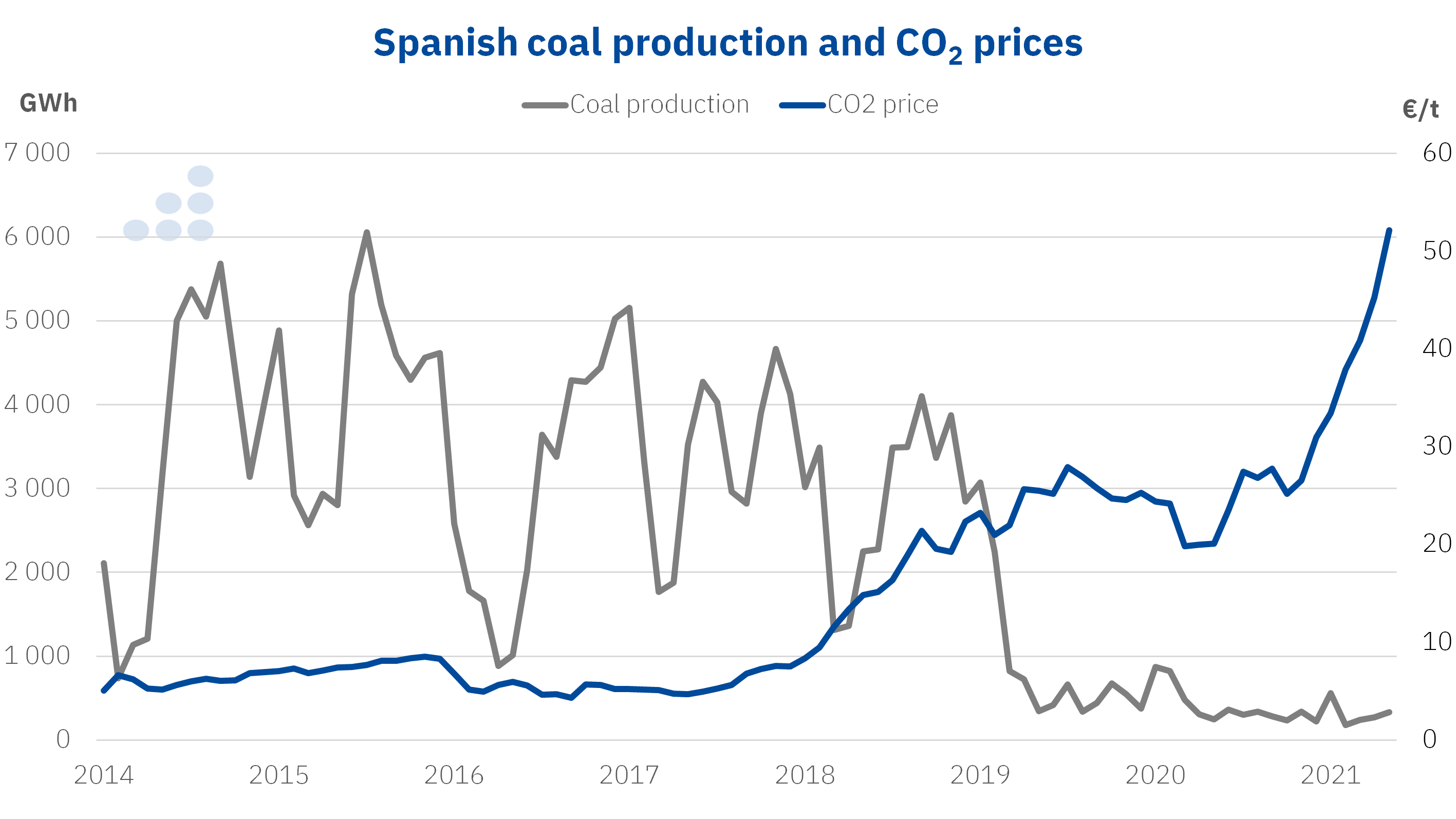 Source: Prepared by AleaSoft using data from REE and EEX.

If CO2 prices are above €30/t, the competitiveness of European large consumers can be affected, so it is essential to lower their prices so as not to affect the recovery of the economy.

The European Union would have to intervene so that CO2 prices fall and remain in a balanced level for the development of renewable energies and the competitiveness of large consumers, fundamentally in the next ten years while nuclear power plants are closed at while increasing the renewable energy capacity. From AleaSoft it is considered very important that the Government exhort the European Union to make use of the stability reserve and to stop the speculation that exists in the market.

Taking into account the rise in CO2 and gas prices, AleaSoft launched a special promotion of the long‑term prices curves forecasting reports of the European markets. These forecasts have a 30‑year horizon with hourly details, an essential characteristic to quantify the profitability of investments in new renewable energy technologies and to define the best price structure in a PPA. In addition, the reports include confidence bands based on a probabilistic metric that allow measuring the risk or probability that the price will fluctuate above or below a value.

On July 15, the next AleaSoft’s webinar will be held, in which the half‑year balance of a wide range of European markets will be carried out, which includes those that are usually analysed in these monthly webinars, but also others that can generate opportunities for the agents of the sector, such as those of Poland, Greece, Romania, Serbia. In addition, the prospects for the energy markets for the second half of the year will be analysed and the AleaSoft’s vision of the future on the role that green hydrogen will have in the decarbonisation of industry and transport will be discussed.

PrevAnteriorElectricity demand is added to CO2 and gas prices as causes of the rises in the European markets
SiguienteThe price escalation of Brent, gas and CO2 continues without giving a breath to the European electricity marketsNext
Menu
Facebook-f Twitter Linkedin Instagram