The price escalation of Brent, gas and CO2 continues without giving a breath to the European electricity markets

AleaSoft, June 28, 2021. During the fourth week of June, Brent and gas prices registered all‑time highs and those of CO2 once again exceeded €55/t. In this context, the European spot and futures electricity markets prices continued to rise. The increases were also favoured by lower renewable energy production in some markets. However, in the MIBEL market, the prices fell thanks to the decrease in demand and the increase in solar and wind energy production.

During the week of June 21, there were increases in solar energy production in the markets of Spain and Portugal of 45% and 44% respectively, compared to the third week of June. However, the production with this technology decreased in most of the analysed markets. In the German market it fell by 25%, while in the markets of France and Italy the drops were 8.7% and 3.7% respectively.

For the week of June 28, the AleaSoft‘s solar energy production forecasting indicates that it will increase in the markets of Germany and Italy. However, a lower generation is expected in the Spanish market. 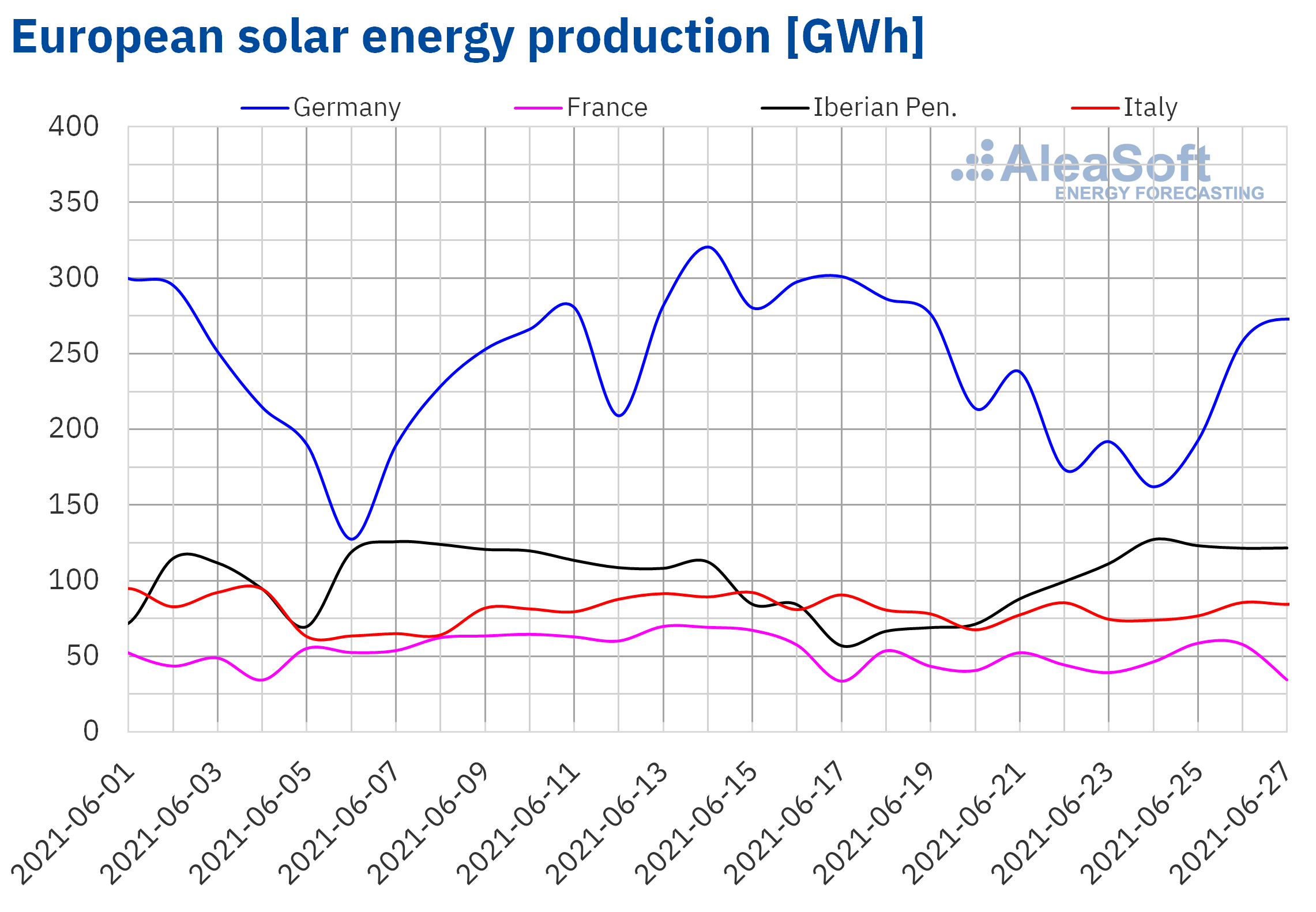 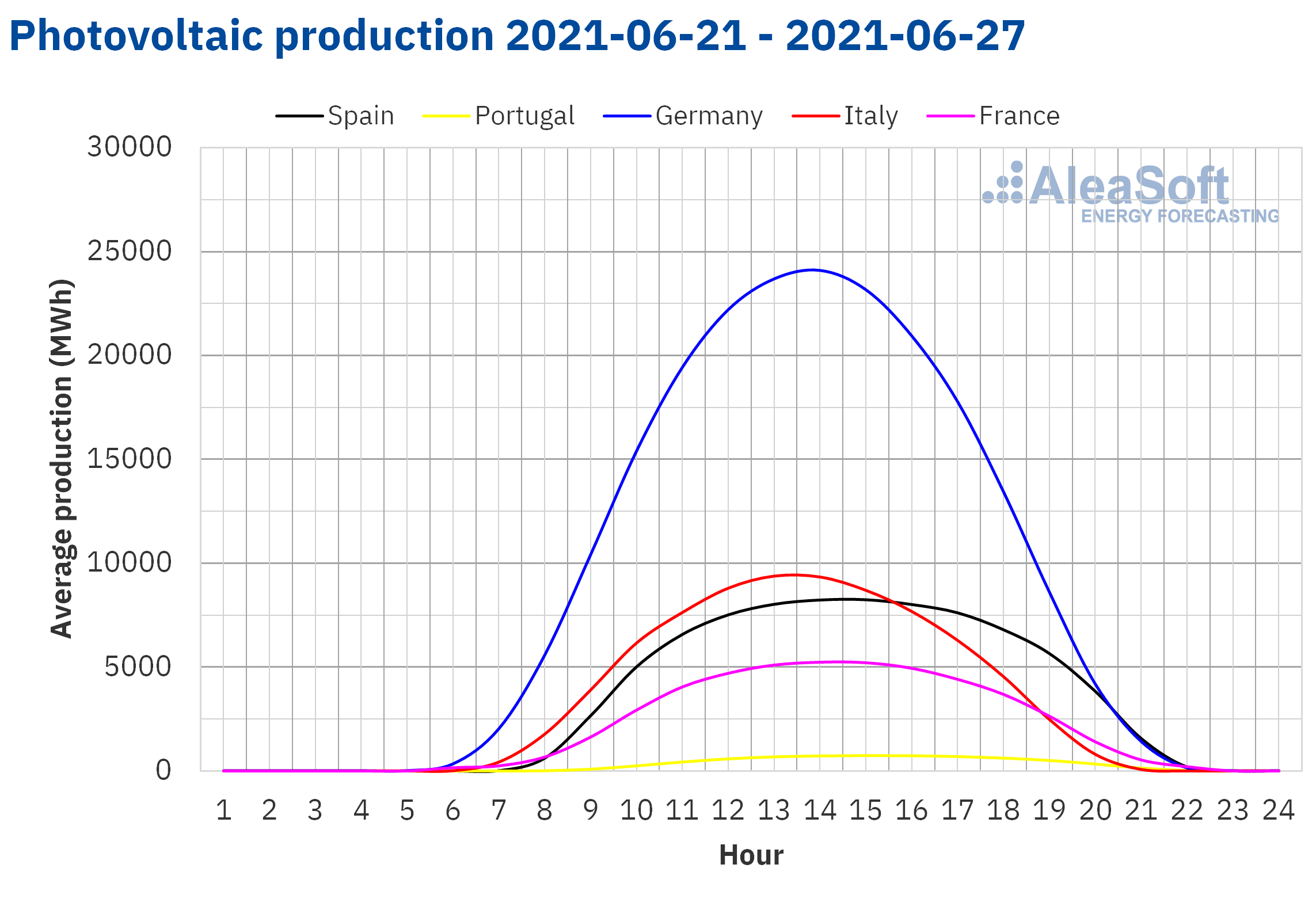 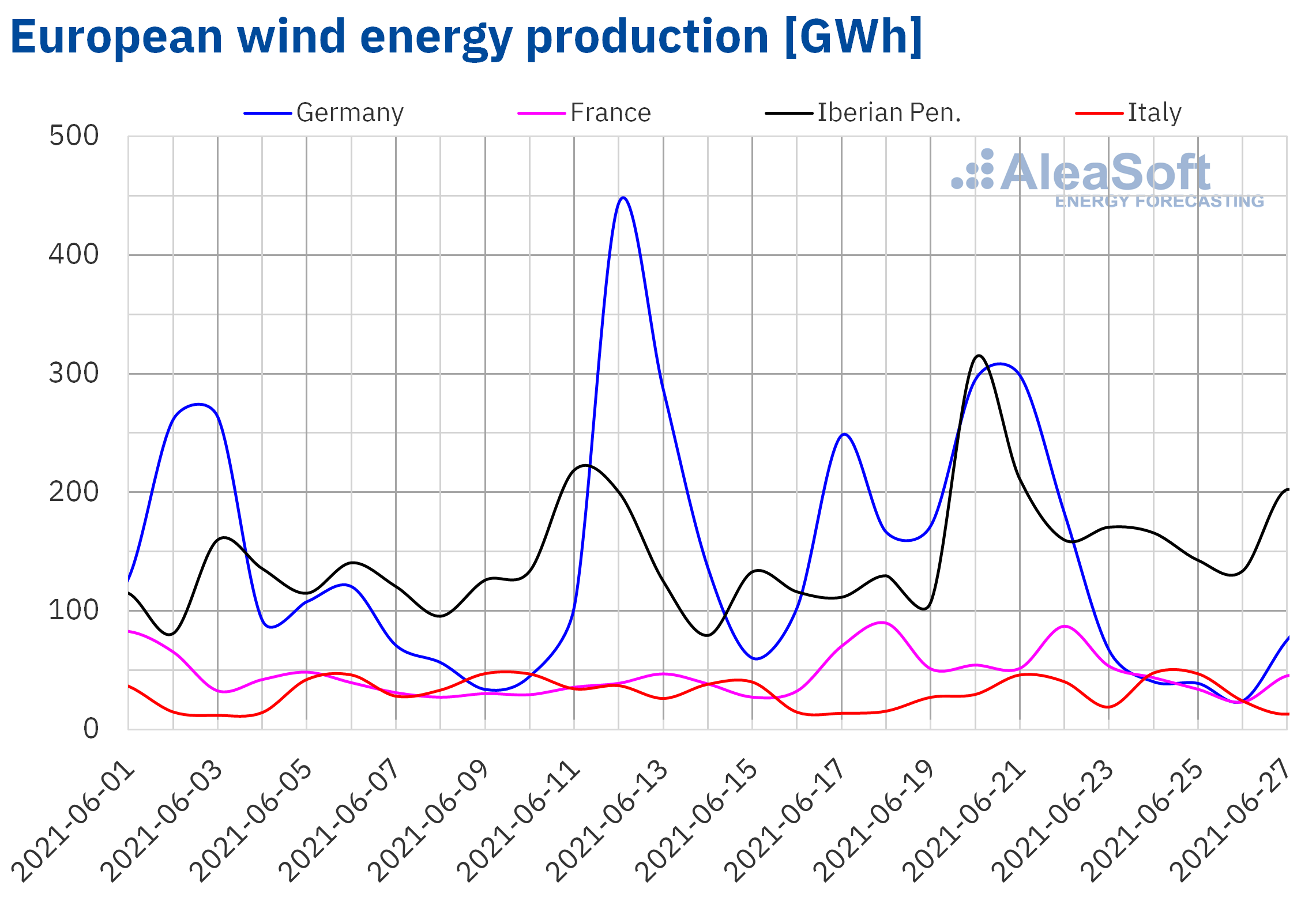 In the week of June 21, the electricity demand fell in most European markets compared to the previous week. The drop in weekly average temperatures, which reached 5.1 °C in Belgium, was the main cause of the drops in demand. The markets of Spain, Germany and France had the most notable decreases, which were between 3.0% and 5.0%. In the case of Spain, the San Juan holiday, celebrated in various regions on June 24, also favoured the decrease in demand. However, in the Italian market, where average temperatures increased, the demand increased by 8.3%.

The demand will recover in most markets during the week of June 28, according to the AleaSoft’s electricity demand forecasting, as increases in average temperatures are expected. 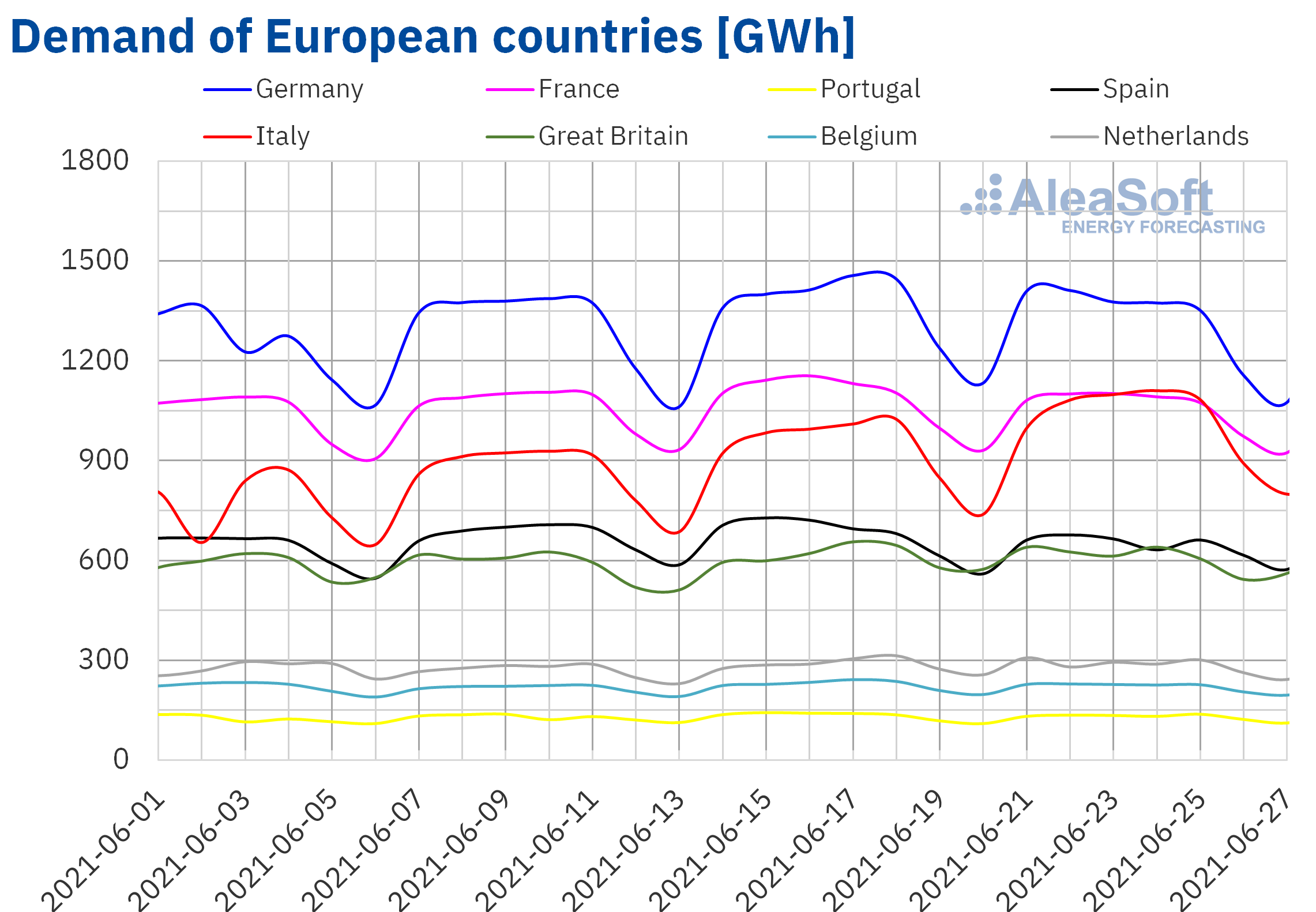 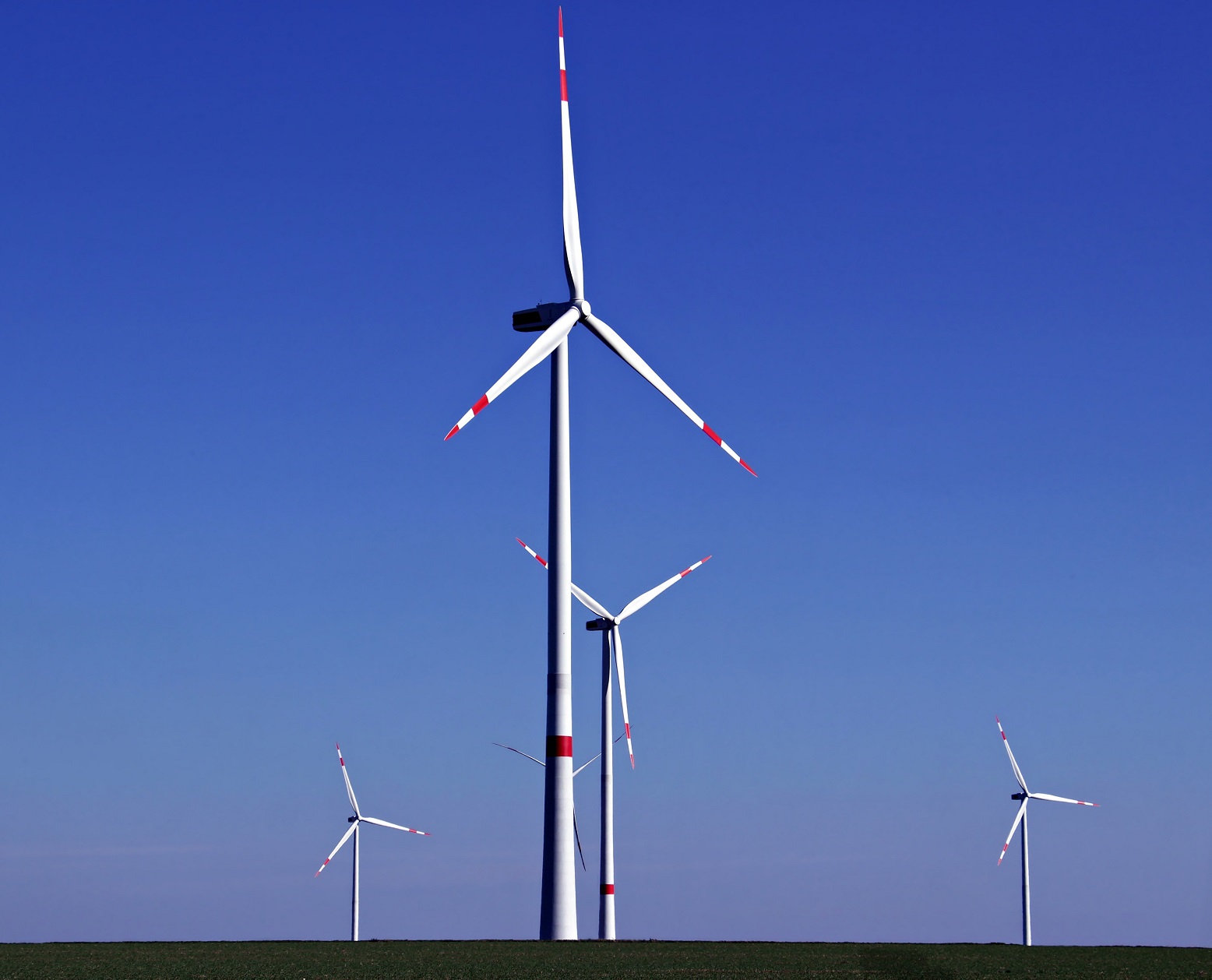 The AleaSoft‘s price forecasting indicates that in the week of June 28, the prices will continue to increase in most markets. Also in the MIBEL market, prices are expected to recover favoured by the fall in wind and solar energy production in the Iberian Peninsula. 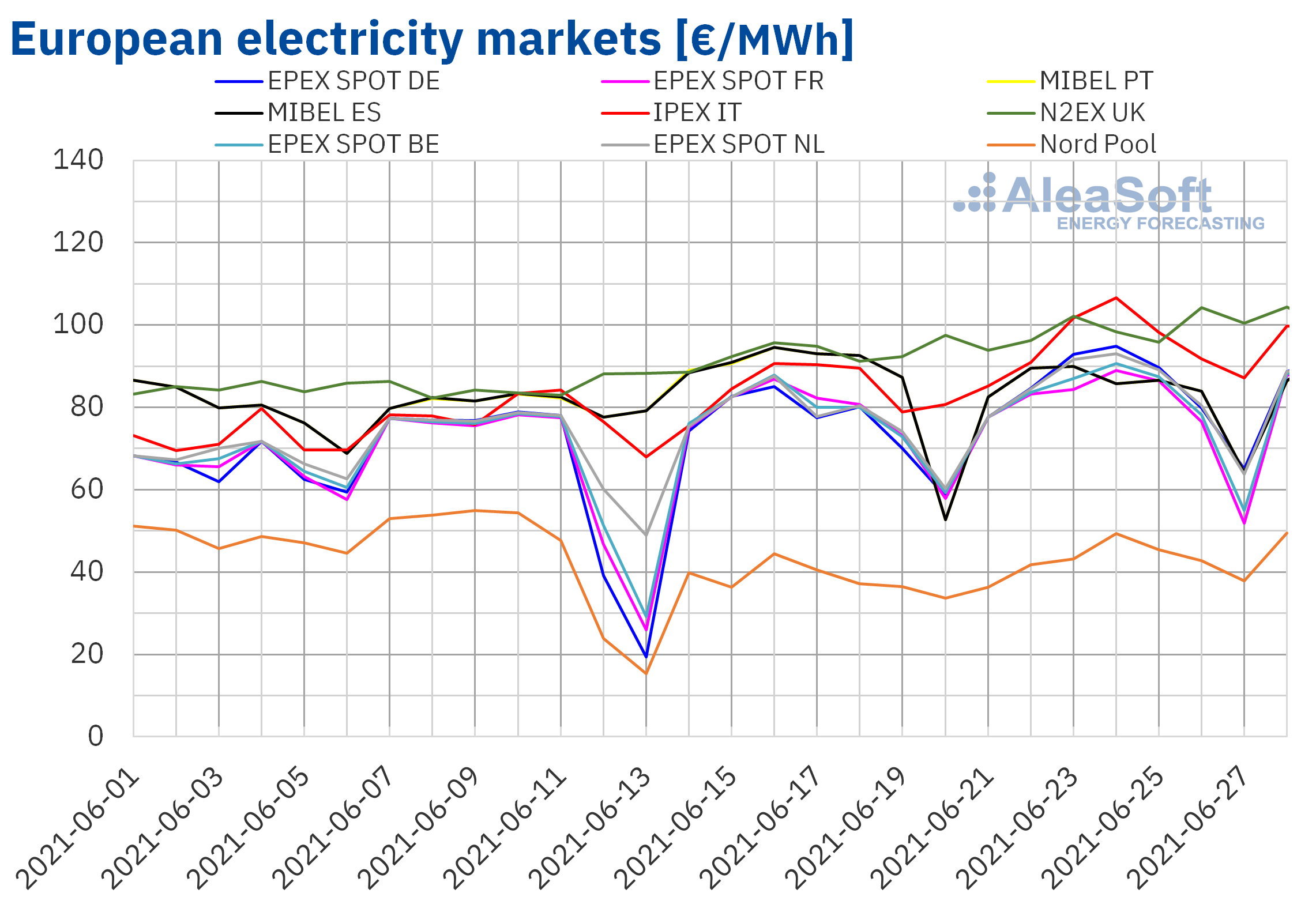 During the fourth week of June, the electricity futures prices for the next quarter registered a significant increase in all the European markets analysed at AleaSoft if the settlement prices of the sessions of June 18 and 25 are compared. The largest percentage increase occurred in the ICE market of the Nordic countries, with a 30% rise, closely followed by the NASDAQ market of the same region with 28%. In the rest of the markets, the increases were between 4.8% and 11%, with the EEX market of Spain being the one with the lowest increase.

Regarding the electricity futures prices for the next calendar year, a similar situation occurred. In this case, it was the OMIP market of Spain and Portugal that registered the smallest increase, with a 4.6% rise for both cases. In the rest of the markets, the increases reached 8.2% registered by the ICE market of the Nordic countries.

The Brent oil futures prices for the month of August 2021 in the ICE market, during the fourth week of June, registered, in general, an upward trend. As a result, on Friday, June 25, a settlement price of $76.18/bbl was reached, which was 3.6% higher than that of the previous Friday and the highest in the last two years.

As COVID‑19 vaccinations advance and mobility increases, the recovery in demand continues to favour the increase in Brent oil futures prices.

In the coming days, the expectations about the OPEC+ meeting of July 1 will exert their influence on the evolution of prices. The expansion of the more contagious Delta variant of the coronavirus, as well as the possibility that Iran will reach a pact that allows the lifting of sanctions on its crude exports, might limit the production increases that the OPEC+ will agree for August.

As for the TTF gas futures prices in the ICE market for the month of July 2021, during the fourth week of June they continued to increase. As of Tuesday, June 22, the settlement prices exceeded €30/MWh. On Friday, June 25, a settlement price of €32.83/MWh was reached. This price was 10% higher than that of the previous Friday and the highest value in at least the last seven years for the M+1 monthly product.

The low levels of the gas reserves combined with high demand for electricity generation, favoured by the decline in renewable energy production in countries such as Germany and France, led gas prices to continue increasing in the fourth week of June.

Regarding the CO2 emission rights futures prices in the EEX market for the reference contract of December 2021, during the fourth week of June, they increased until reaching a settlement price of €55.09/t on Thursday, June 24. This price was 8.2% higher than that of the previous Thursday and the highest since mid‑May. However, on Friday there was a slight decrease to €55.05/t. 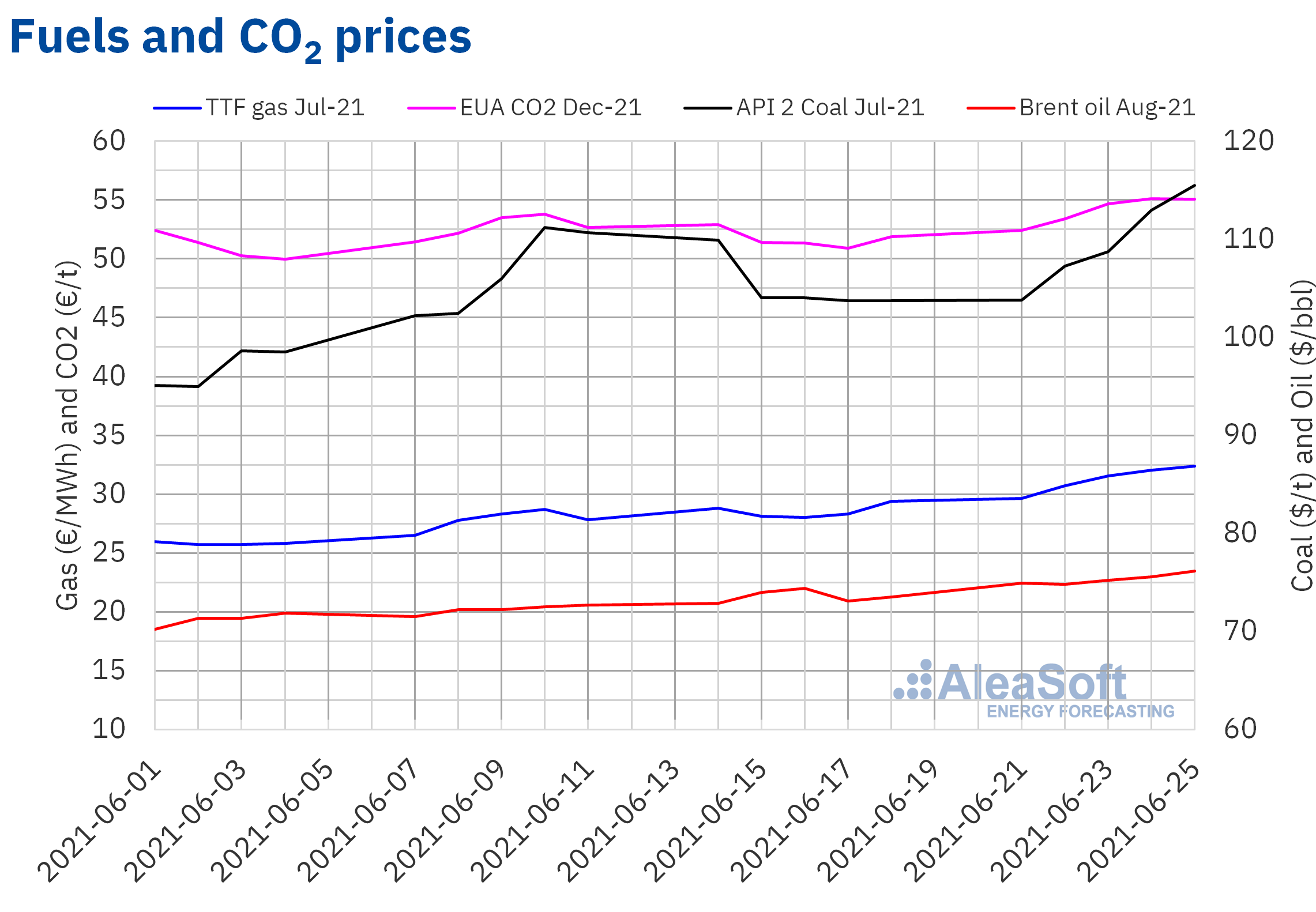 Taking into account the rise in CO2 and gas prices, AleaSoft is carrying out a special promotion of the long‑term prices curves reports of the European electricity markets. One of the characteristics that differentiate these reports is that the forecasts are hourly throughout the forecast horizon, of 30 years. This allows quantifying the profitability of the renewable energy projects and it is a necessary input in contracting a PPA in the definition of price structures. In addition, the forecasts include the confidence bands corresponding to the P15 and P85 percentiles, which are very useful in risk management.

The next webinar is being organised at AleaSoft, which will be held on July 15. On this occasion, the balance of the first half of 2021 of the European electricity markets will be carried out and the prospects for the second half of the year will be analysed. The AleaSoft’s vision of the future on the role that green hydrogen will have during the energy transition will also be explained, mainly in the decarbonisation of sectors such as transport and industry that currently have a great weight in the emissions of polluting gases in the European Union.