All colours of hydrogen

In recent months, the number of news items about the hydrogen exploded exponentially. No day goes by without a new post on a new electrolyser project, a hydrogen storage project, new production capacity targets or collaborations between companies, or even between states, for the development and implementation of technologies related to the hydrogen.

The latest most relevant news announces that the Italian government wants the hydrogen to cover 20% of the final energy demand in 2050 and recently presented its strategy to achieve this. In Spain, the Government approved the Green Hydrogen Roadmap, which aims to achieve a capacity of 4 GW of electrolysers by 2030. Both countries want to collaborate to become a benchmark in southern Europe in terms of green hydrogen production. According to AleaSoft, the hydrogen revolution is necessary and at the same time it enhances the photovoltaic revolution, that is, it is its perfect complement, and the green hydrogen is destined to be the fuel of the future.

What colour is the hydrogen?

There is talk about black, gray, brown, blue hydrogen and the one that seems the most appropriate, which is the green hydrogen. In fact, the hydrogen is a colourless gas. The name of the hydrogen colours is according to the way it is produced and is an indication of the amount of CO2 that is released during the process or of how “clean” it is. The black or brown hydrogen is a product of the coal gasification and CO2 is released during its production.

The gray hydrogen is produced from the steam methane reforming from natural gas. This is the most widely used production system today and it also generates CO2 emissions. If all or a large part of these CO2 emissions are captured with a carbon capture, utilisation and storage (CCUS) system, then the generated hydrogen is called blue hydrogen. This production system is considered low‑emission, but not completely emission‑free and it is intended to be a transition system to reduce the emissions.

Finally, there is the green hydrogen, produced directly from the electrolysis of water using electricity from renewable sources such as the photovoltaic energy, the wind energy or the hydroelectric energy. The green hydrogen is considered to be the only one that, in the long run, can function in a fully decarbonised economy.

The costs of producing hydrogen and its expected evolution

The production of low‑emission hydrogen is increasing rapidly, especially with electrolysers, although its presence is still very testimonial. The announcement of new capacity for the next few years does not stop increasing and more and more innovative projects are committed to using the hydrogen, especially in the industry and the transport sector. 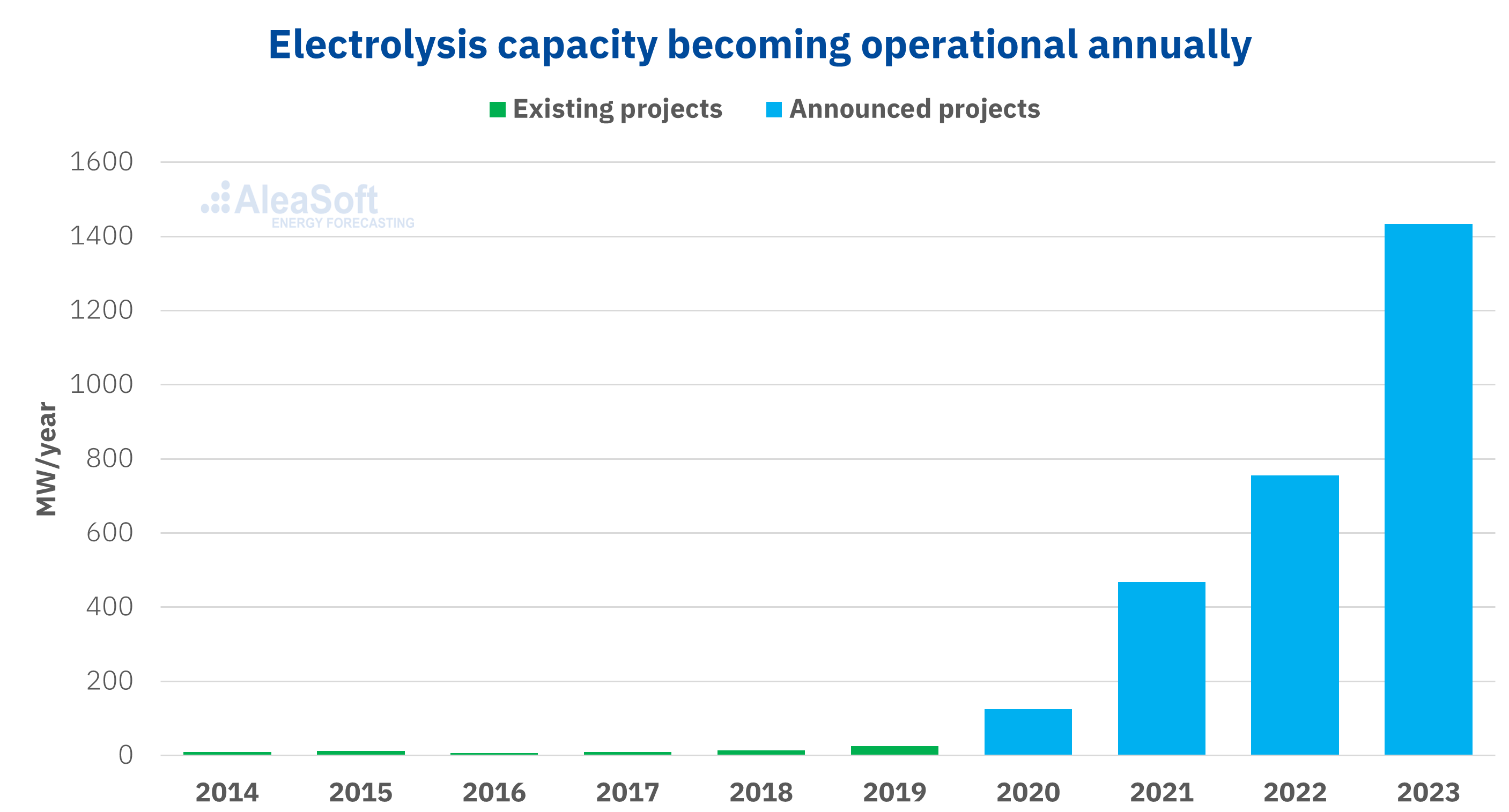 The future and the evolution of the energy markets in Europe

Detailed analysis of the role of the hydrogen and its impact on the evolution of the energy markets in Europe with those keys that allow a clear vision of the future of the European energy system and that provide knowledge, intelligence and opportunities are available in a set of AleaSoft‘s reports for the energy sector.

Webinars that disseminate useful information and knowledge to the professionals of the energy sector are also organised at AleaSoft. The next webinar is scheduled for January 14 and will feature with the participation of speakers from the consulting firm PwC Spain on this occasion, to analyse the status and the vision of the PPA contracts market for large consumers, their impacts and requirements, and the need of future electricity market prices estimates.