AleaSoft, March 26, 2020. The confinement measures and the coronavirus crisis spread throughout Europe, which lowered the electricity demand in general in the European markets. This, together with lower gas and CO2 prices and an increase in renewable energy production in most of the continent, led to lower prices in the markets. The Germany’s solar energy production for the first days of this week is the highest so far this year.

The solar energy production increased in most European markets during the first three days of this week compared to the average of the previous week. In Germany, the production with this technology increased 57%, with values above 200 GWh per day, the highest so far this year. In the Iberian Peninsula the increase was 21%. The exception was the Italian market in which the generation decreased by 13%.
So far in March, the solar energy production in the German market increased by 32% compared to the same period of 2019, while in the Iberian Peninsula it increased by only 1.8%. On the contrary, in the Italian market it was 5.3% lower.
The analysis carried out at AleaSoft indicates that, at the end of this week, the solar energy production in Germany will be higher than the last week’s total. On the contrary, in Italy it is expected that this week it will end up being lower. 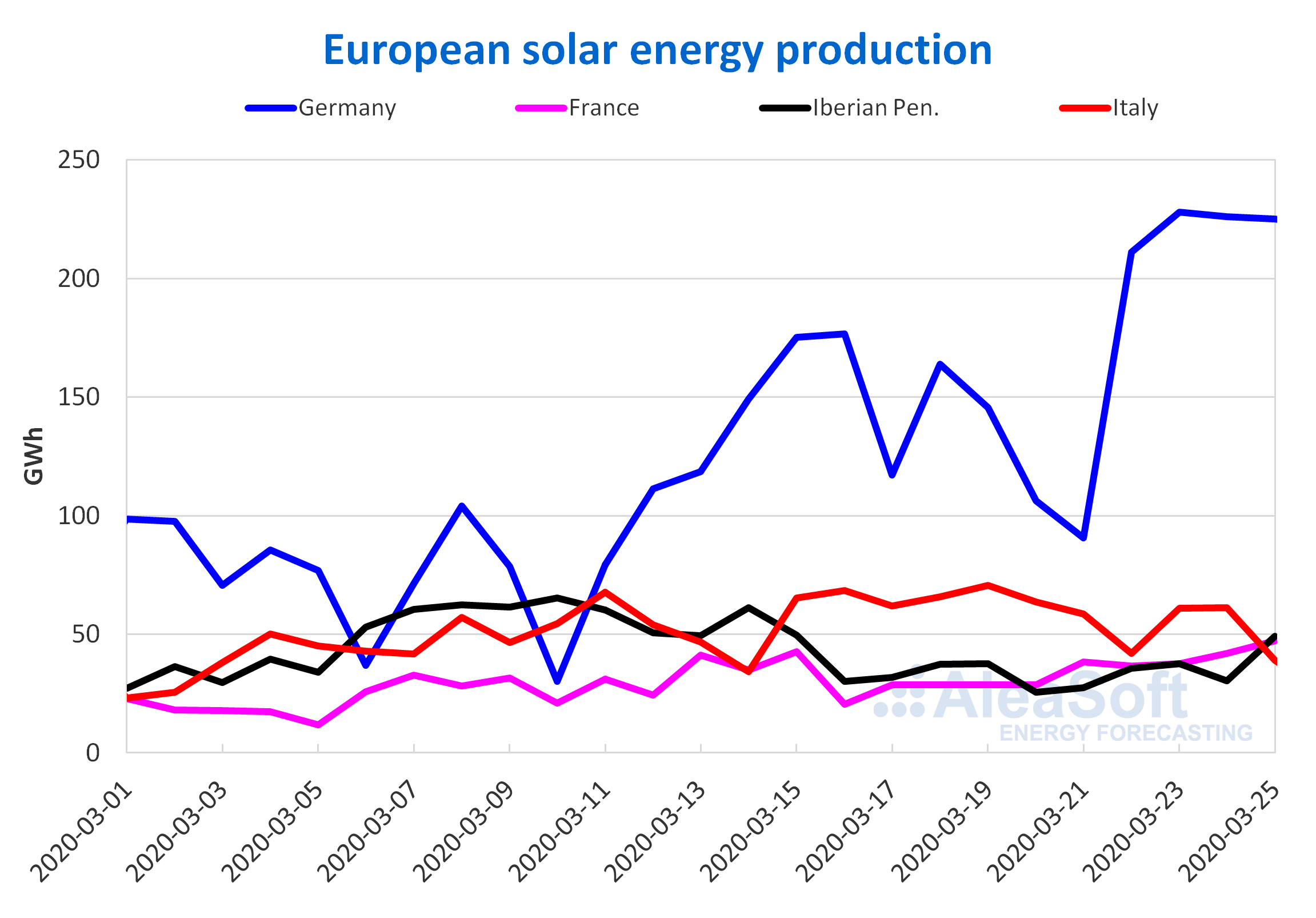 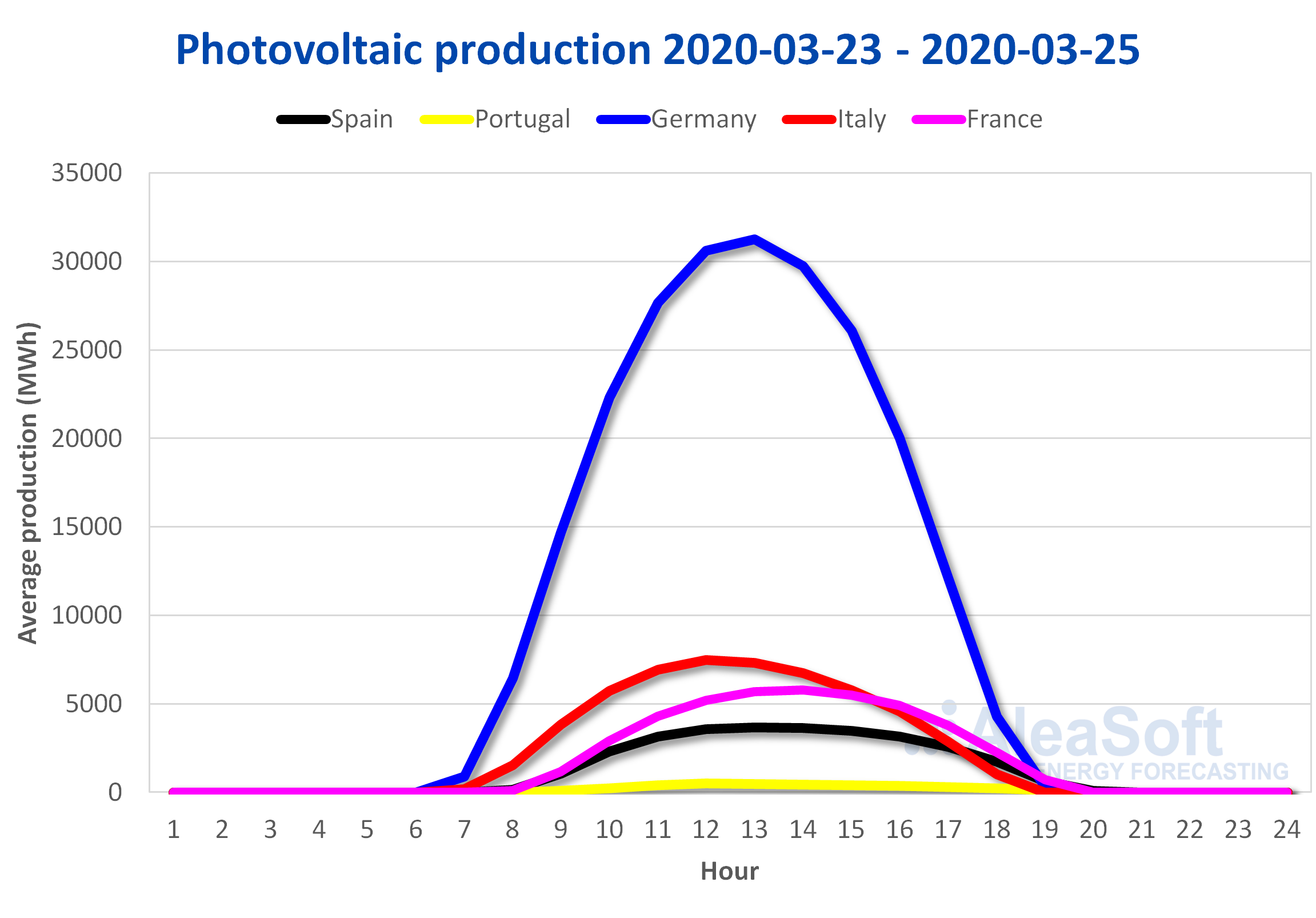 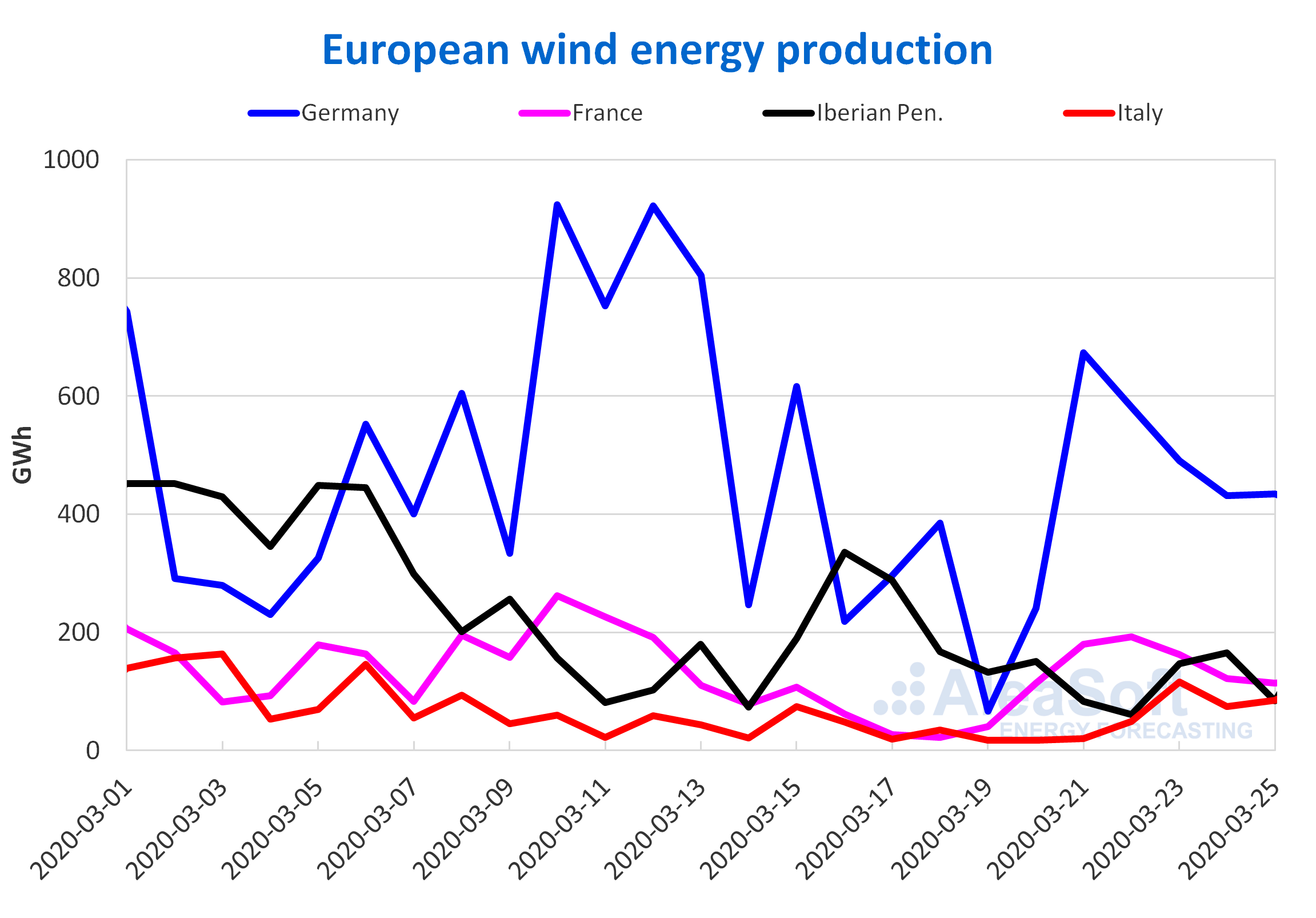 The Europe’s electricity demand continues to decline due to the measures that were taken in the different countries to stop the expansion of the coronavirus. During the first three days of this week the demand of all countries was lower than that of the first three days of the week of March 16. This despite the fact that the temperatures were colder than those of the same period of last week, with the exception of the Iberian Peninsula. For example, in Germany the temperature decreased more than 7 °C on average and still the demand was 3.7% lower. Something similar happened in France, a market where the demand is very sensitive to variations in temperature. In this case the average temperatures were 3.7 °C colder and the demand fell by 4.8%. 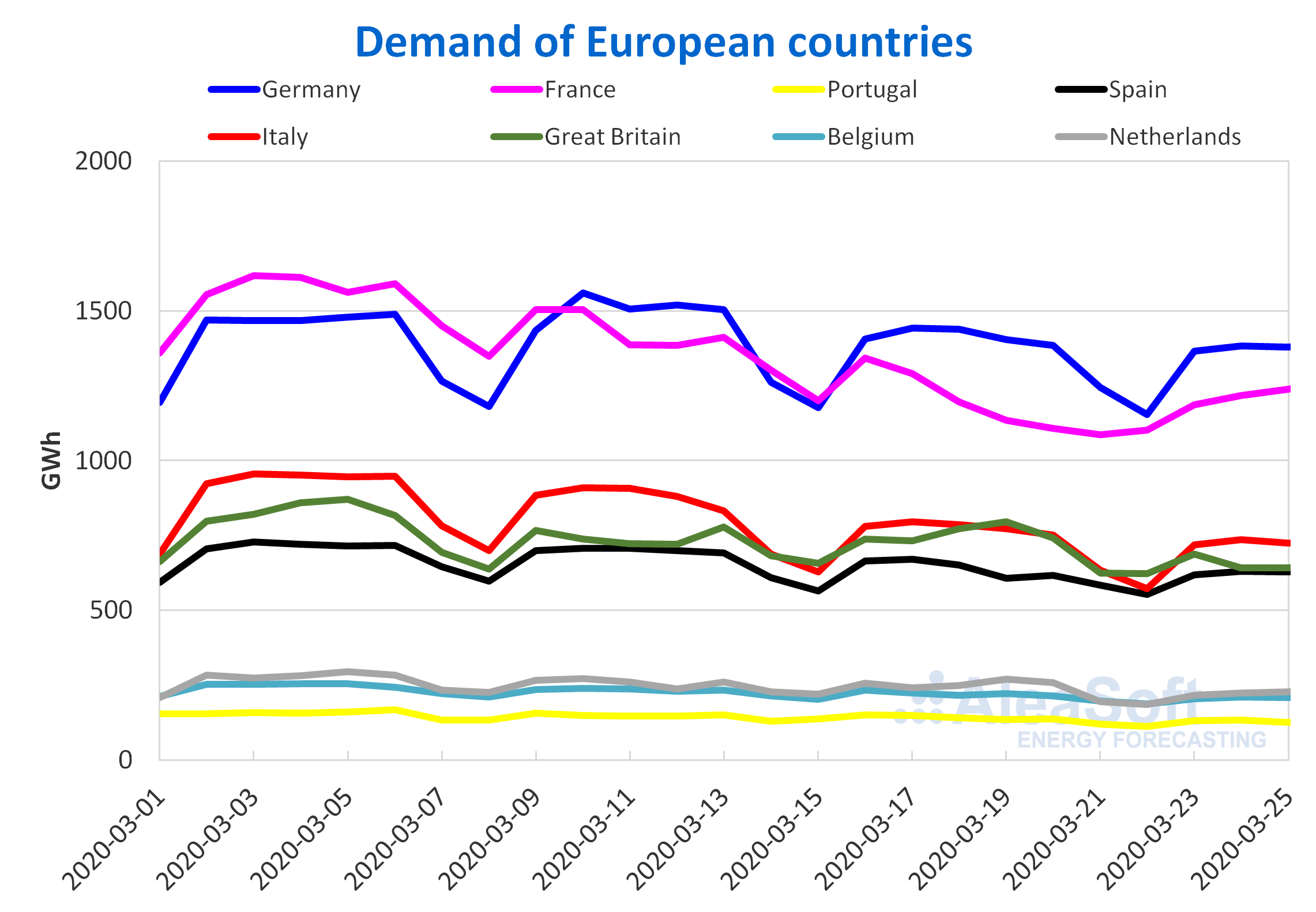 Source: Prepared by AleaSoft using data from ENTSO-E, RTE, REN, REE, TERNA, National Grid and ELIA.
The market where the demand fell the most in the first three days of this week was Great Britain, 12% compared to the first three days of last week. Last Monday, March 23, the British Government announced measures to stop the spread of COVID 19, among which is the quarantine of the British citizens. The effect of these measures began to be seen in demand from Tuesday. In addition to the fact that the demand fell compared to the same days of last week, the hourly profile varied, reducing the consumption during the business hours, between the hours of 8 and 17 and increasing from 18. 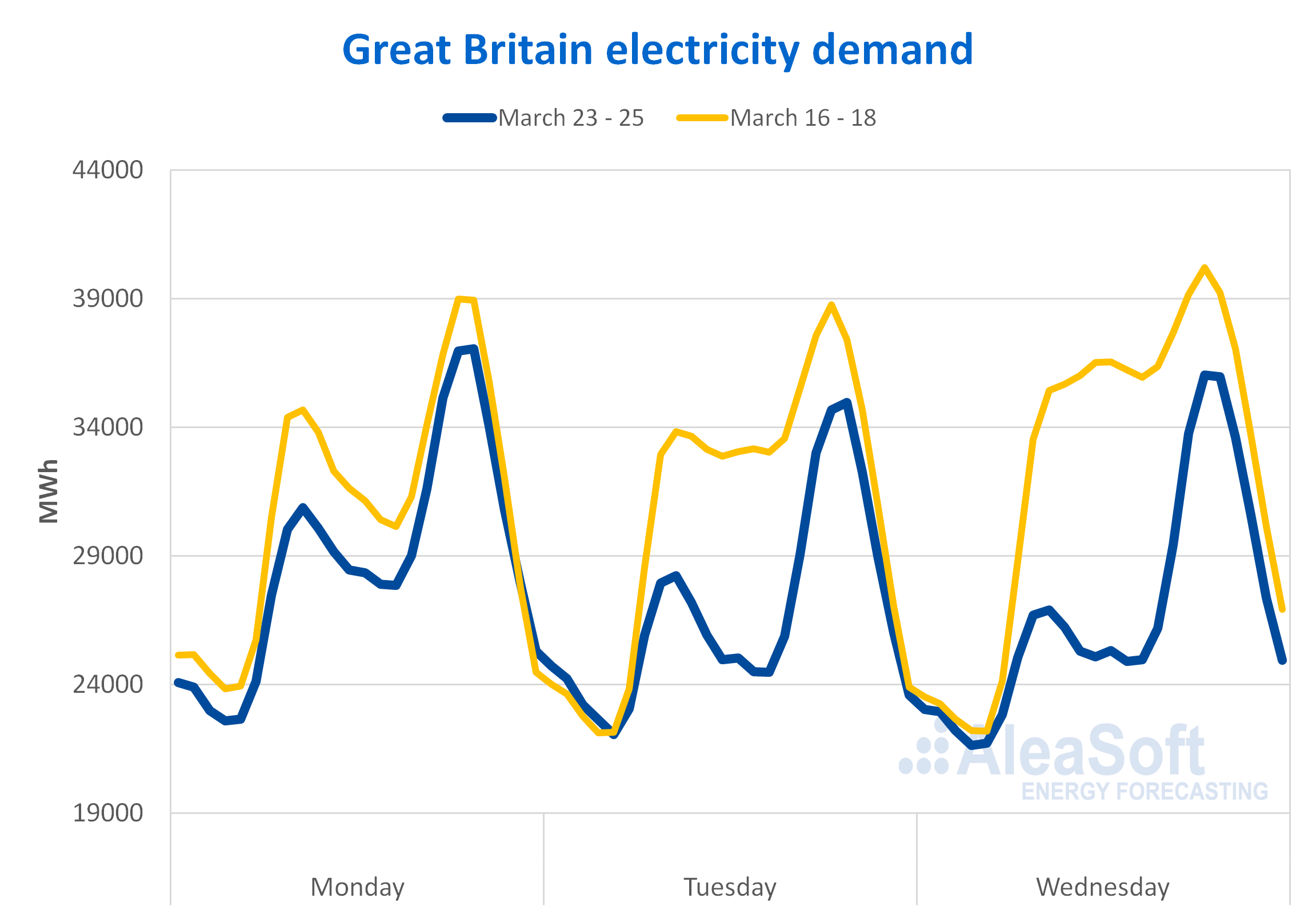 The solar energy production in Mainland Spain, which includes photovoltaic and solar thermal energy, increased by 21% during the first three days of this week compared to the average of the previous week. During the 25 elapsed days of March, it increased by 1.3% compared to the same days of March 2019. At AleaSoft, the solar energy production is expected to increase this week compared to last week’s total.
Regarding the wind energy production of Mainland Spain, during the first days of this week it was 23% lower than last week’s average. Comparing the periods between March 1 and 25, 2019 and 2020, this month the wind energy production registered an increase of 22%. At AleaSoft it is expected that this week the production with this technology will be lower than the total of last week.
In Mainland Spain, the demand decreased so far this week compared to that of the same period of last week. The decrease was 5.5%. The average temperatures were slightly less cold, which led to the decrease, although the measures to cope with the coronavirus crisis are the main reason for the decrease. Given the interest aroused by the effect of the coronavirus COVID 19 in the energy sector and more specifically in the electricity consumption, as an indicator of economic activity, at AleaSoft an observatory to show the evolution of the electricity demand of Spain in the current week and in the two previous weeks was created.
At the moment, all nuclear power plants are running and the nuclear energy production maintains a level close to 170 GWh per day. Sources: Prepared by AleaSoft using data from REE.
The hydroelectric reserves currently have 13 765 GWh stored, representing an increase of 351 GWh compared to the previous bulletin, according to data from the last Hydrological Bulletin of the Ministry for the Ecological Transition and the Demographic Challenge.

In the elapsed days of this week until this Thursday, March 26, all the European electricity markets analysed at AleaSoft registered price drops compared to the same days of the previous week. The EPEX SPOT markets of Germany, France, Belgium and the Netherlands were very coupled during these days with prices ranging between €16/MWh and €24/MWh. These markets, together with the Italian IPEX market, were the ones with the greatest decreases, above 25%. The N2EX market of Great Britain, with a variation of 12% and an average price of €32.73/MWh, was the market with the highest prices so far this week, while the Nord Pool market with the same variation, of 12%, was that of the lowest prices, below €8/MWh. On the other hand, the MIBEL market of Spain and Portugal was the one with the lowest decrease, 4.9% and 4.7% respectively.
Among the reasons that caused this drop in prices in the European markets are the fall in electricity demand in general due to the measures taken by the governments of each country in order to stop the expansion of the COVID 19 pandemic, which in some countries it started two weeks ago and in others it started this week. Another cause of these declines is the increase in wind and solar energy production in some of the markets, such as the markets of Germany, France and Italy. Added to this is the fact that CO2 prices dropped and that gas prices continue with historical minimum values.
The AleaSoft‘s price forecasts point to the fact that on the rest of the days of the week the prices will continue to decrease, so that at the end of the week the average price compared to the previous week will continue to be lower than that of the week of March 16 in all markets of the European continent. 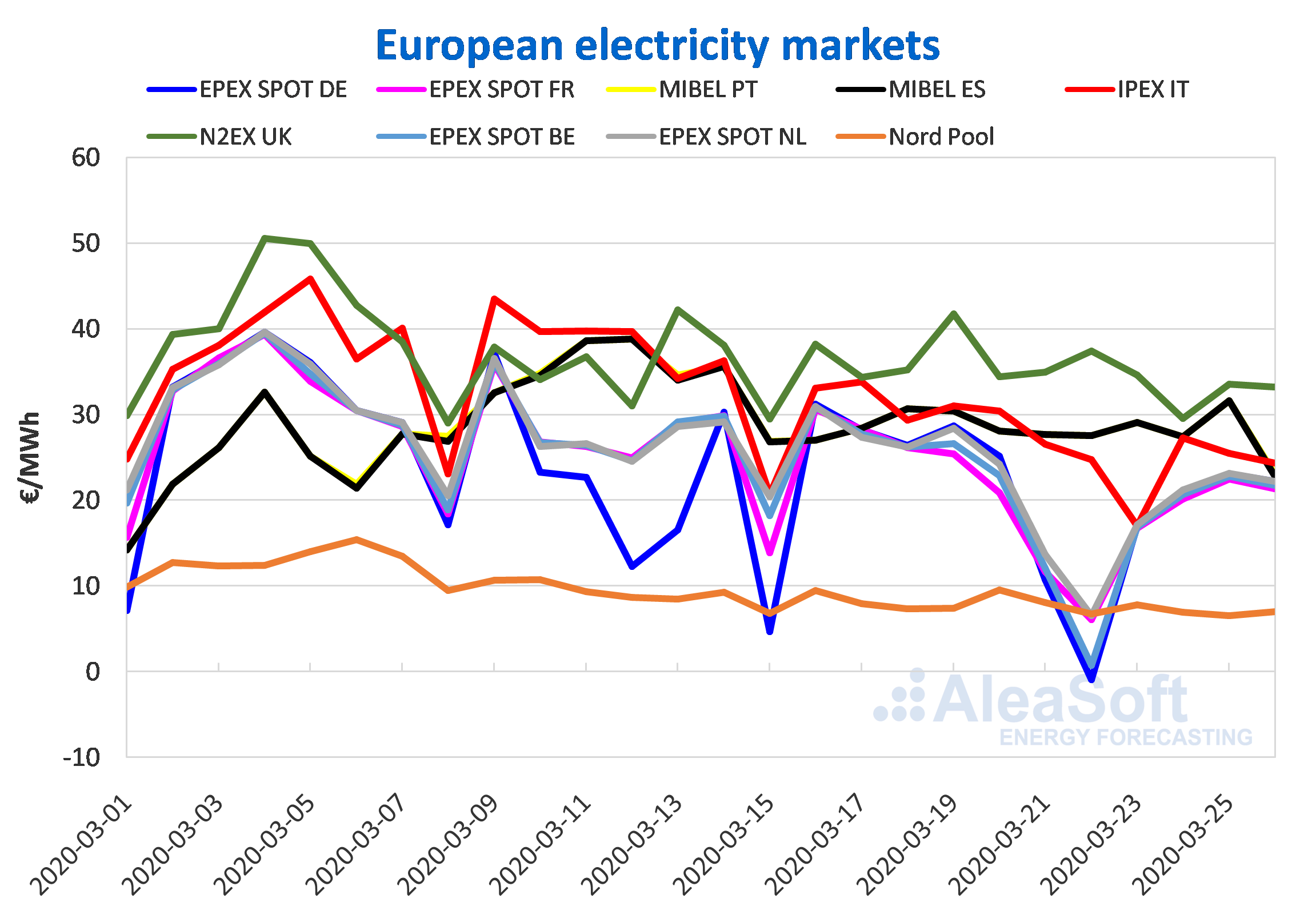 During the second week of the state of alarm decreed by the Spanish Government, the prices continued to decrease in the Iberian market compared to the same days of the previous week. The continuous decrease in electricity demand in this second week of confinement, in addition to higher solar energy production, lowered the prices for the first four days, despite lower wind energy production compared to last week’s average.

So far this week the price drops in the electricity futures markets analysed at AleaSoft for the product of the second quarter of 2020 continued. The ICE and NASDAQ markets of the Nordic countries settled in the session of Wednesday, March 25, at €7.75/MWh. This value is the result of the combination of the effects of the measures taken to stop the expansion of the coronavirus and a forecast of more humid climate for the next quarter in these countries with large installed capacity for hydroelectric energy generation. The OMIP market of Spain and Portugal is the one that registered the steepest decline in absolute terms, with a decrease of €1.98/MWh in both countries.
Regarding the product of the calendar year 2021, there was a slight recovery in prices in most markets in the elapsed days of this week compared to the settlement price of last week, Friday, March 20. The exception was the ICE market and the NASDAQ market of the Nordic countries, which registered decreases of 4.7% and 4.4%, respectively. In the rest of the markets, the registered recoveries are between 0.4% and 2.3%. The EEX market of France was the one with the highest rise, of €0.90/MWh. 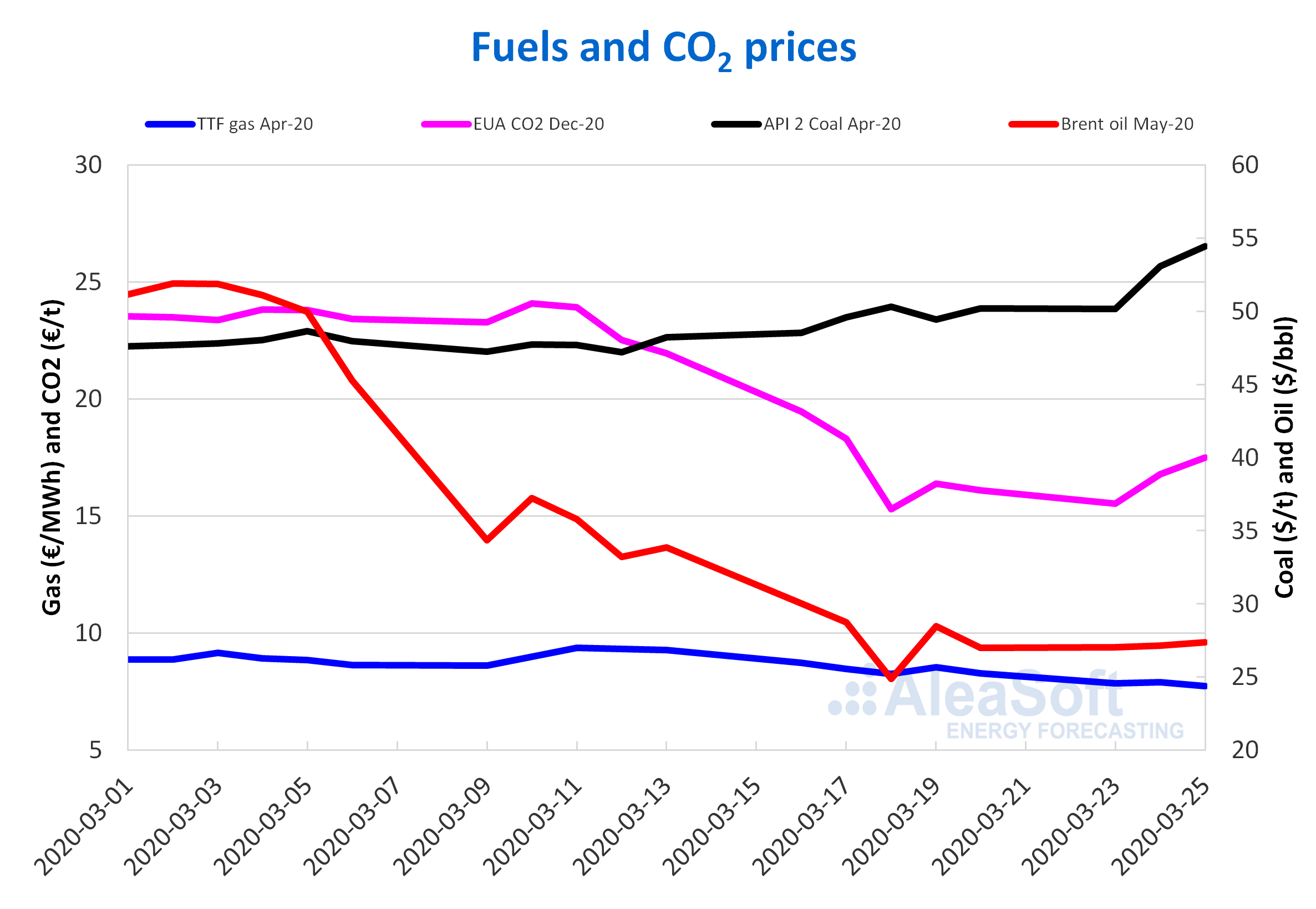 PrevAnteriorFall in demand and prices of the European electricity markets due to the COVID 19 crisis
SiguienteInterview of pv magazine with Antonio Delgado Rigal, CEO of AleaSoftNext
Menu
Facebook-f Twitter Linkedin Instagram