The electric vehicle: Key element for decarbonisation and integration of renewable energies

AleaSoft, December 19, 2019. The electric vehicle and its widespread adoption as a mobility solution raises many questions: Will its cost be acceptable to users? Will there be enough electricity for all cars? Will the power grid support the simultaneous charging of millions of cars? Will its use be compatible with intermittent renewable energy production? AleaSoft analyses the feasibility and long-term impact of the massive implementation of the electric vehicle and how it will contribute to transport decarbonisation.

The electric vehicle as a weapon against climate change

The electric vehicles with batteries do not emit CO2 or other polluting gases while driving. For this reason, its massive implementation would improve air quality in urban areas. In addition, noise pollution would also be reduced, since they are less noisy than combustion vehicles.

However, there may be indirect air pollution associated with its use if the energy used to recharge the batteries does not come from clean and renewable sources, such as wind or solar energy. In general, the use of the electric vehicle will represent a reduction in CO2 emissions, nitrogen oxides and particles compared to the use of conventional vehicles. For example, in the case of Spain, according to REE (Red Eléctrica de España), indirect emissions of electric vehicles are now at least 50% lower than those of combustion cars. According to estimates made by REE, every million electric vehicles in operation would reduce CO2 emissions by 1.1 Mt per year, which would represent a 1.3% reduction in emissions associated with road transport. 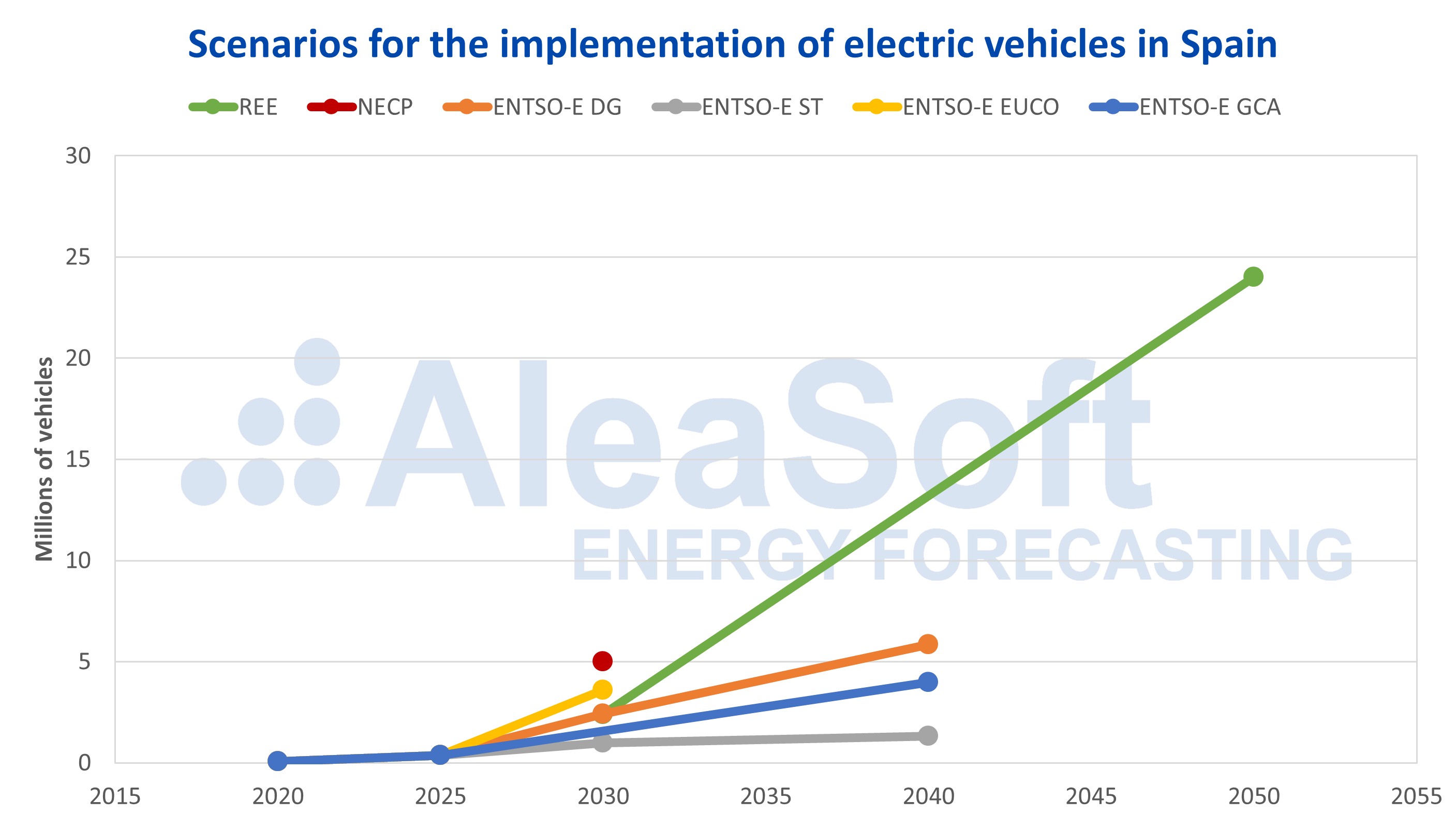 On the other hand, according to projections of the European Commission, if the electric vehicle reaches a share of 80% in the fleet of passenger transport by road, by 2050 its use could mean a reduction of 255 Mt in CO2 emissions, which would be equivalent to approximately 10% of the total emissions planned for that year in the European Union. But, the evolution of CO2 emissions in each country will depend a lot on the use of fossil fuels for the generation of electricity made and, as the case may be, they could increase. According to IRENA (International Renewable Energy Agency), so that the use of the electric vehicle with batteries represents an advantage, the levels of CO2 emissions due to electricity generation must be less than 600 g/kWh.

The generation of electricity with fossil fuels would also compensate to some extent the reductions in NOx and particulate emissions. Moreover, in countries where electricity production is mostly based on coal, according to the EEA (European Environment Agency), the use of the electric vehicle can mean up to five times the SO2 emissions compared to the use of the conventional vehicle.

For these reasons, it is essential to accompany the implementation of the electric vehicle with a change in the electricity production, leaving aside fossil fuels, especially coal.

The electric vehicle and the increase in electricity demand

In 2050, assuming that 80% of the vehicles are electric, the EEA estimates that in the European Union, on average, 9.5% of the total electricity consumed will be used to recharge the batteries of these vehicles and about 150 GW more installed capacity will be needed.

On the other hand, for the use of the electric vehicle to reduce greenhouse gas emissions, it is necessary to accompany the implementation of these types of vehicles with a progressive change in the energy sources used for electricity generation, increasing the weight of renewable energies and reducing the use of fossil fuels, to avoid the increase of pollutants such as SO2 and even CO2 in some cases.

In the case of Spain, according to the Integrated National Energy and Climate Plan (NECP), the objective is to reach 100% of the generation of electricity with renewable energy by 2050, which would also avoid indirect pollutant emissions.

The charging points network: the critical point for the widespread adoption of the electric vehicle

In Europe, between Germany, France and the Benelux currently add about 123 000 public charging points, which is insufficient considering the 730 000 electric vehicles in this region and that by 2025 it is expected that there will be between four and five million.

As regards Spain, there are currently around 5000 public charging points in the country and it is intended to reach 120 000 by 2035, according to Red Eléctrica de España. For this, REE signed, at the end of 2018, a collaboration agreement with the Spanish Federation of Municipalities and Provinces, according to which it provides technical assistance to municipalities on electric mobility to facilitate the installation of public charging points.

Moreover, according to a report on electric mobility in Europe from the Oeko-Institut and Transport & Mobility Leuven, only 10% of electric vehicles could lead to serious problems in European electricity grid. Although the number of vehicles that could start causing technical difficulties will depend on the electricity system of each country, to manage these problems, smart battery recharge systems would have to be implemented, which will require the corresponding technical and regulatory development.

The smart recharging of the batteries can be approached from different points of view such as the reduction of the economic cost of the recharge, the use of the peaks of renewable energy production or the proper functioning of the electricity grid by reducing the demand peaks. The periods of low demand usually coincide with those of lower prices and, in general, would make it advisable to recharge the batteries overnight. However, this depends on the generation mix of each country. For example, a high production of solar energy would allow recharging during the day.

In the case of Spain, REE created in 2017 the Control Centre for the Electric Vehicle, which allows monitoring the electricity demand at the charging points. This centre, in collaboration with the city councils, must allow to intelligently managing the public charging points network in Spain. 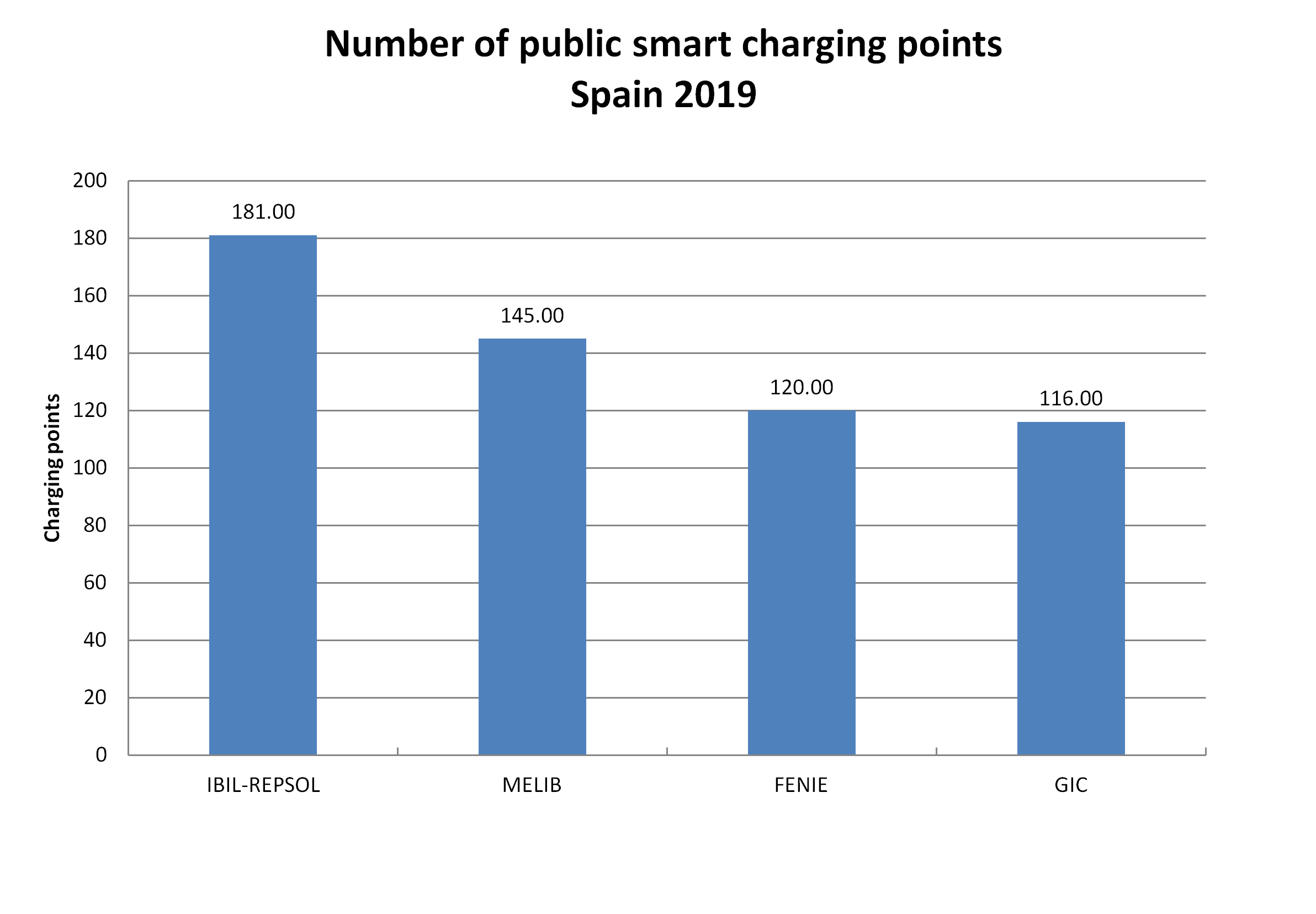 On the other hand, the recharging of batteries, in addition to being carried out at different times of the day, can be done at different speeds which will also influence its price. Depending on the power of the recharging point, the time may be reduced from several hours in a normal domestic recharging station, of less than 10 kW, to approximately a quarter of an hour in recharging points with powers of 150 kW, but the cost can increase considerably. In addition, rapid recharging may cause further degradation of the batteries.

Finally, it must be taken into account that recharging at home is not something that will be possible in general, given that there are countries where a significant proportion of vehicles spend the night outdoors. For example, in Spain, about 70% of cars are usually parked on the street. Then, the only possible recharge option is going to be at the public charging points. In addition, in these cases, it is also unreasonable to think that the owners of the vehicles will recharge the batteries of their vehicle during the night or that they can spend too much time in this activity.

The massive implementation of the electric vehicle represents an opportunity to respond, on the one hand, to the need to reduce pollution levels in large cities and, on the other, to the urgency of reducing greenhouse gas emissions to fight against climate change. For this reason, the use of electric vehicles will be favoured in the coming years by laws at different levels within the European Union.

According to data published by the European Environment Agency last September, it has been proven that tax incentives for electric vehicles contributed to the reduction of CO2 emissions in the transport sector in those countries where they were implanted. For example, these types of measures contributed to the increase in the electrification of the vehicles fleet of countries such as Norway or the Netherlands, where in 2017 reductions in CO2 emissions from new cars of 54% and 38% were achieved, respectively, compared to 2001.

Together with the availability of an adequate charging points network, the price of electric vehicles is an important factor for the generalisation of this type of cars. Thus, the increase in the purchase of battery electric vehicles in Norway, up to representing 21% of the total in 2017, is related to the fact that the fiscal aids and advantages end up equating the cost of the electric vehicle with that of combustion in this country.

However, according to the manufacturers, the price difference between electric and combustion vehicles will disappear by 2025 due to the lowering price of batteries, which would reduce the need for financial assistance for the acquisition of such vehicles.

On the other hand, when buying a new vehicle, to the possible incentives for the purchase of electric vehicles we must add the circulation restrictions of the most polluting vehicles that are being implemented in many urban areas, both in specific episodes of high levels of air pollution, as in the most central areas of urban centres.

In this sense, according to the Integrated National Energy and Climate Plan (NECP), from 2023, access to the most polluting vehicles will be limited to the central areas of all Spanish cities with more than 50 000 inhabitants.

A promising and inevitable future

Despite the multiple and disparate forecasts, scenarios and opinions on the adoption of the electric vehicle as the main mode of personal mobility, what is clear is that the electric vehicle is an essential element in the fight against climate change and to help decarbonisation. Its widespread implementation will eliminate emissions in transport which is one of the sectors that currently contributes most to the emissions of polluting and greenhouse gases.

The increase in flexible demand for recharging vehicle batteries will allow the increase in renewable photovoltaic and wind energy production. The electricity production with these renewable sources is intermittent in nature and will require the flexibility that allows smart recharging of electric vehicles to be managed correctly.

While the battery electric car is not the solution for all transports, it is for the daily personal mobility solutions of many users. For longer journeys and heavier loads, vehicles with batteries will be complemented with cars, trucks, ships and airplanes with hydrogen fuel cells.

The electric car has arrived and is here to stay.