The European markets registered a general decline in solar energy production for the week of December 9 compared to the previous one. The largest declines were registered in the markets of Portugal, Germany and France, being 37%, 27% and 20% respectively.

So far this December, the solar energy production increased by 68% in the German market compared to the same period of the previous year. In the markets of France and Portugal there were also increases of 18% and 6.8% respectively, while in Spain and Italy the corresponding decreases were 6.4% and 10%.

For this week, the solar energy production is expected to increase in Germany and decrease in Spain and Italy, compared to last week. 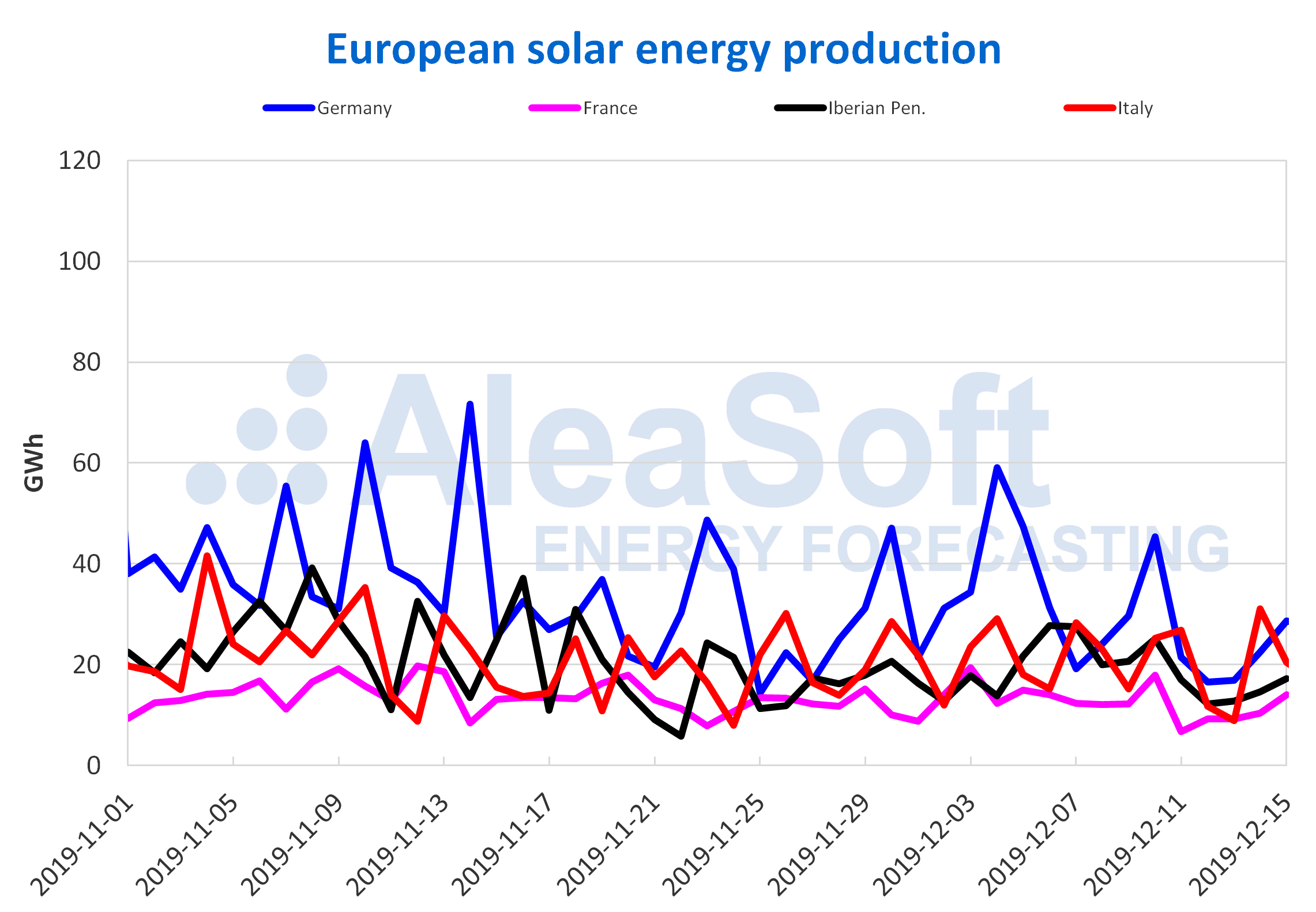 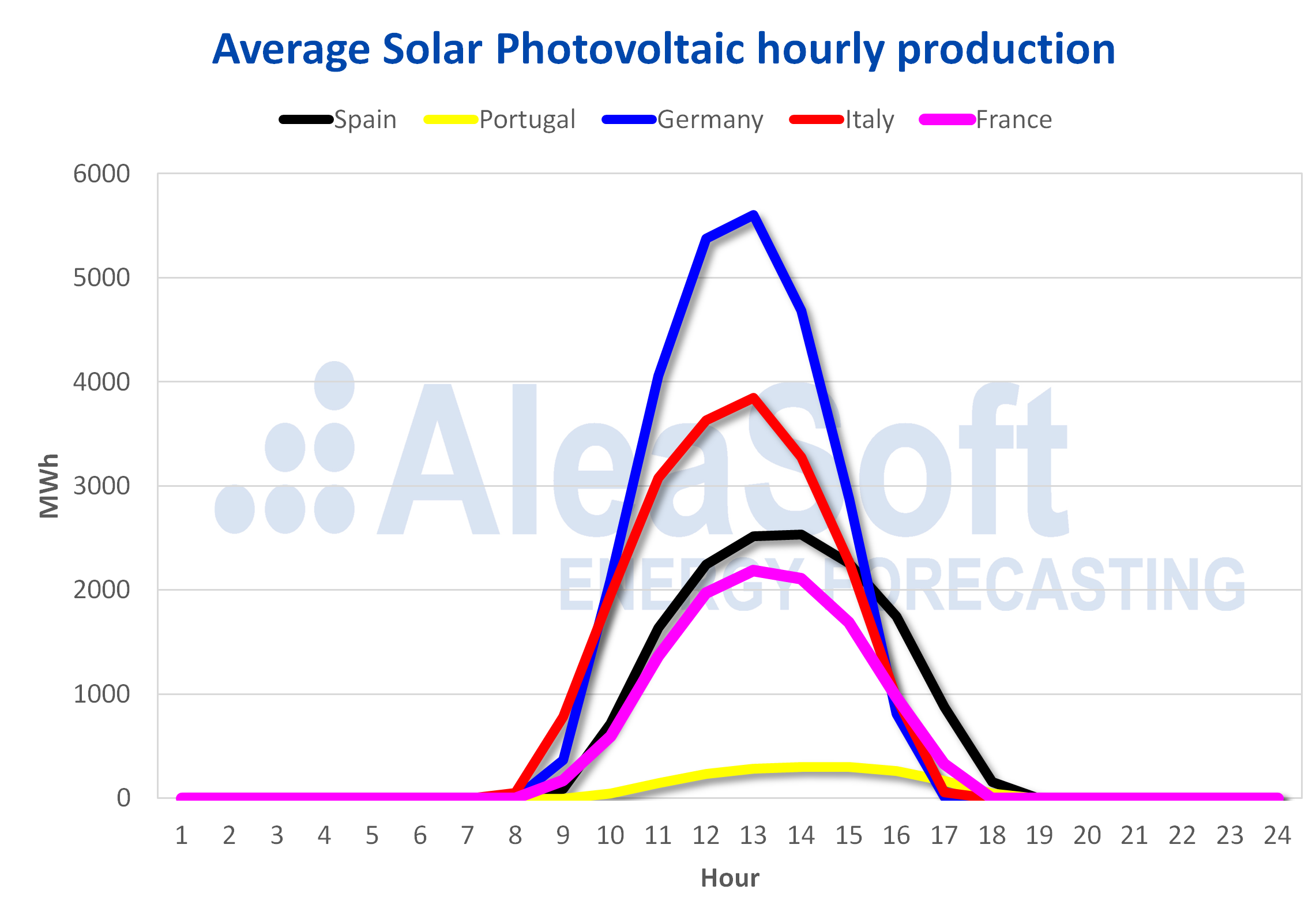 In the markets of France, Portugal and Italy, the weekly wind energy production also increased significantly, with increases of 98%, 62% and 82% respectively. In the German market the production rouse a little less than in the rest of the European markets, reaching an increase of 18% over the previous week.

During the first half of December, the wind energy production increased homogeneously in the European markets, in year‑on‑year terms. The 57% increase in the Italian market is the most prominent, followed by those of Portugal and Spain with 46% and 21% respectively.

At AleaSoft it is expected that during this week the wind energy production will decrease in a large part of the European markets. 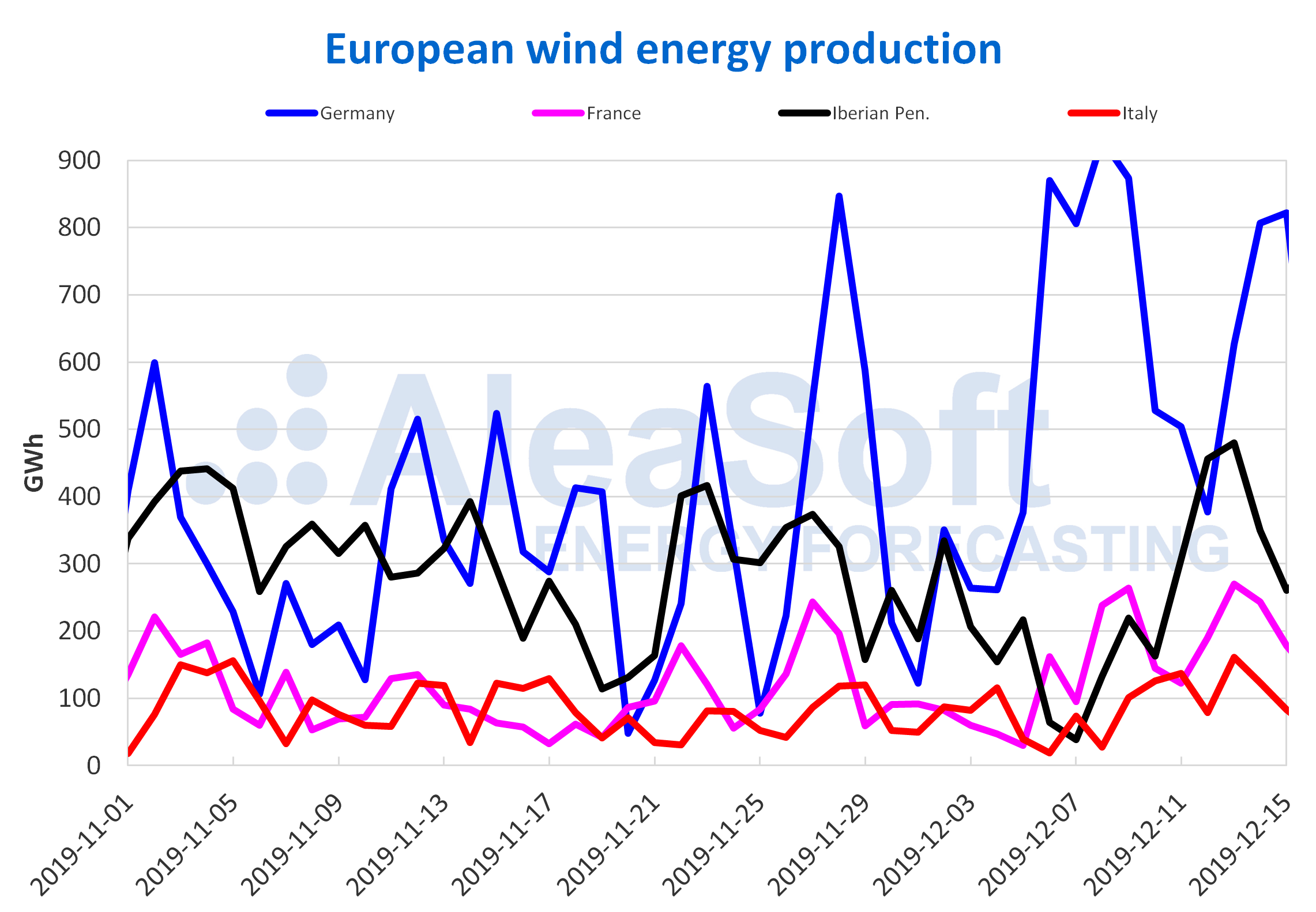 In the just concluded week, the average temperatures increased in a large part of the European continent, which caused decreases in electricity demand of several countries. The greatest variation was ‑4.2% in France, while that of Portugal was the smallest with a decrease of 0.4%. In Spain, the demand increased by 2.2% compared to the week of December 2, although the temperatures were 1.6 °C higher on average. When correcting the labour effect of the holidays of December 6 and 9, the increase in demand in Spain was 0.6%.

During this week, at AleaSoft the electricity demand is expected to decrease in several countries of the European continent, except in Spain and Portugal, where increases are expected. 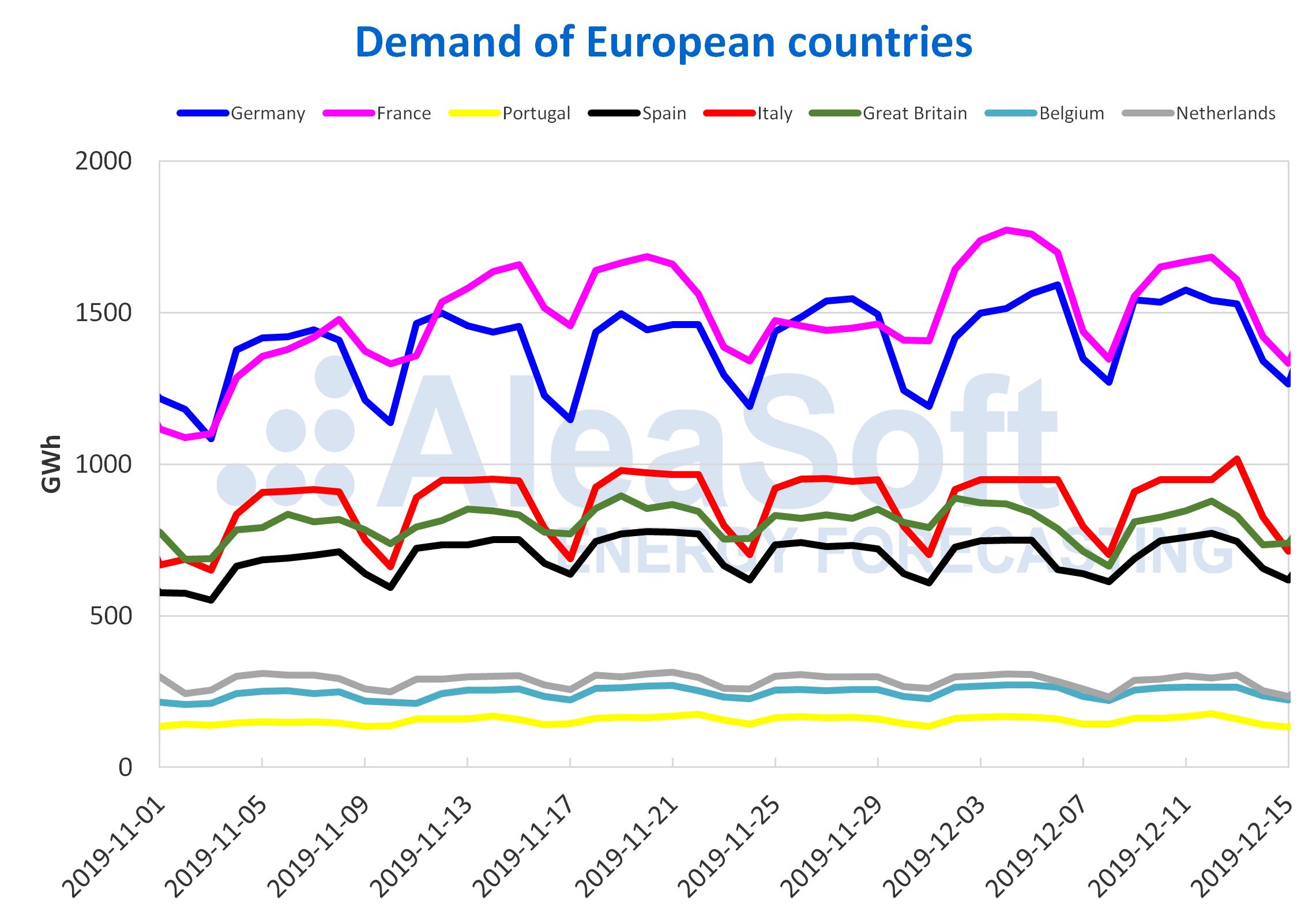 The week that recently concluded was marked by high wind energy production in all European electricity markets, which led to lower prices until reaching negative values in some markets. The most notorious case was in the EPEX SPOT market of Germany, which this Sunday, December 15, presented negative prices in some of its hours again . During the first 11 hours of Sunday, the prices in this market were around zero €/MWh and where negative prices were obtained for hours 7, 8, 9 and 11, averaging a price for that day of €12.68/MWh.

In general, during the week of December 9, all European electricity markets registered an average price lower than that of the week of December 2. The prices variations range from ‑25% of the EPEX SPOT market of France to ‑3.62% of Germany, where despite having the lowest price of €31.25/MWh, it only decreased by €1.17/MWh compared to the previous week, which was marked by the negative price of Sunday, December 8, of ‑€16.38/MWh. The IPEX market of Italy and the N2EX market of Great Britain with averages of €47.23/MWh and €45.93/MWh were those with the highest prices, despite having decreased by 12% and 5.7% respectively. The rest of the markets, EPEX SPOT of Belgium and the Netherlands, MIBEL of Spain and Portugal and Nord Pool of the Nordic countries, were in the range between €35/MWh and €38/MWh.

The general increase in wind energy production, together with warmer temperatures that led to a decrease in electricity demand, except in Spain and Germany, favoured lower prices in the European electricity markets; where this Monday, December 16, the prices began to raise facing weaker wind and solar forecasts. The N2EX market with a price of €52.27/MWh for this day was the one with the highest price, followed by €47.17/MWh of the Italian market. While the MIBEL market of Portugal with an average of €39.69/MWh positioned itself as the one with the lowest price, followed by the Nord Pool market with €39.93/MWh. The prices in the rest of the markets were between €40.27/MWh of the Spanish market and €42.89/MWh of the French market. 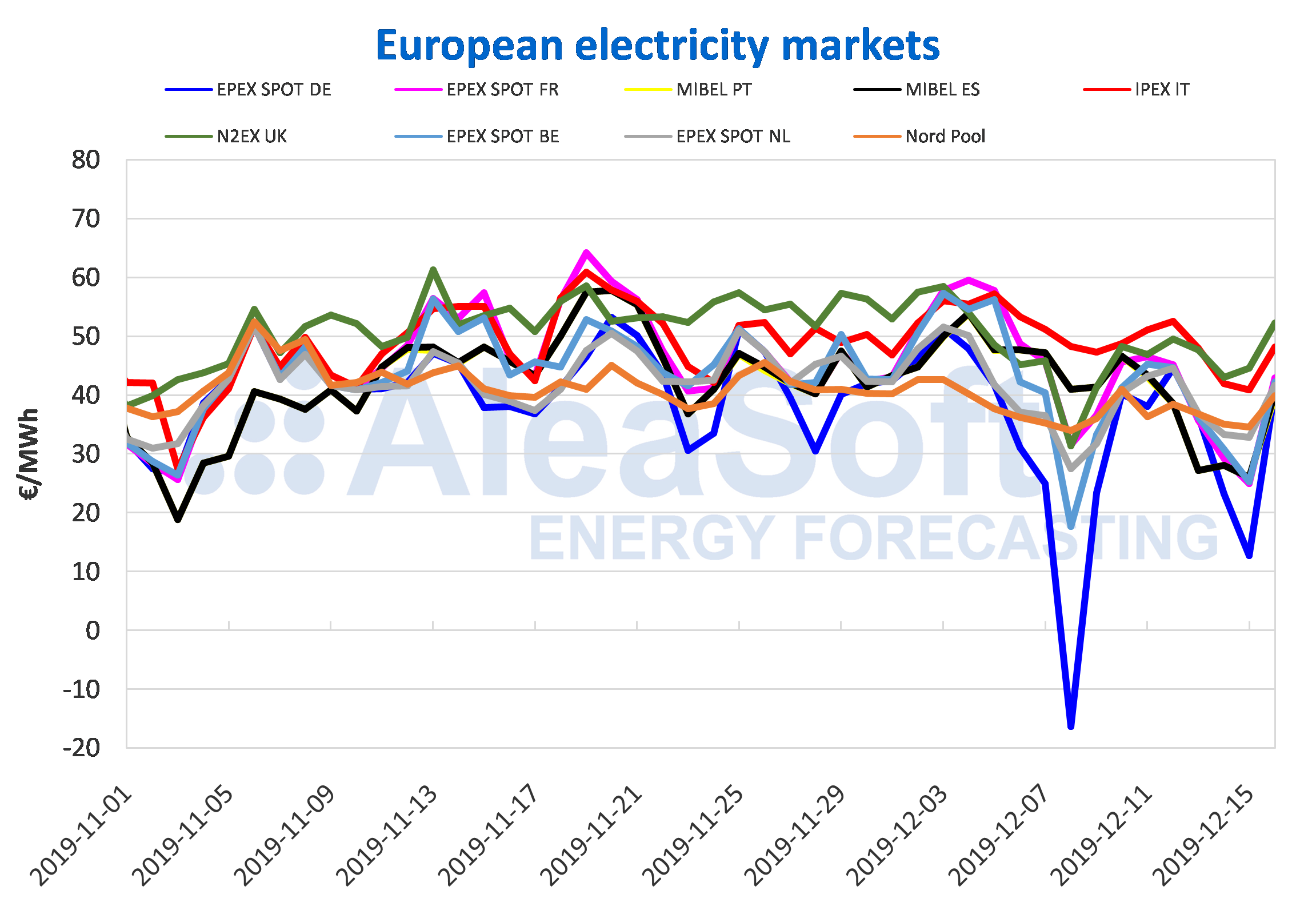 In most futures markets, the prices for the product of the first quarter of 2020 continued their downward trend. The Nordic region remained outside this decline, both in the ICE market and in the NASDAQ market. The price of Q1‑20 of the EEX market of France settled at €48.61/MWh in the session of Friday, December 13. In this way, it is the market with the greatest decrease compared to the previous Friday, December 6. In general, in the markets where this product reduced its price, the decreases were of 4.0% or more. In the meanwhile, the ICE and NASDAQ markets of the Nordic countries registered increases of 0.6% and 2.3% respectively.

On the other hand, the price of the electricity future for 2020 also registered negative differences. In this case the ICE market of the Nordic countries accompanied the majority of markets in the decline, although with a discrete ‑0.1%. Leaving aside the NASDAQ market of the Nordic region, which registered a 1.1% rise, the rest of the markets had a lower price on Friday, December 13, compared to the price of the previous Friday, December 6. The largest decrease in this case corresponds to the EEX market of Great Britain, with 4.8% settling at €42.86/MWh.

The Brent oil futures prices for the month of February 2020 in the ICE market during the first four days of last week remained fairly stable, with values between $64.20/bbl of Thursday, December 12, and $64.34/bbl of Tuesday, December 10, with the exception of Wednesday, December 11, when the settlement price was $63.72/bbl. However, on Friday, December 13, there was a price increase of 1.6% and the settlement price was $65.22/bbl, the highest since September 16, when it reached $65.59/bbl after the attacks against oil facilities in Saudi Arabia. The influence of the trade agreement reached between China and the United States could lead to further price increases earlier this week, but the price trends will also be marked by the US production levels.

The TTF gas futures prices in the ICE market for the month of January 2020 began the week of Monday, December 9, with decreases that continued until Wednesday, December 11. That day a settlement price of €14.05/MWh was reached. However, on Thursday, December 12, there was a 5.1% price increase over the previous day and the settlement price was €14.77/MWh. On Friday, December 13, the price fell again to €13.80/MWh, the lowest value of the last two years.

Thursday’s price increase may be related to the announcement of sanctions by the United States, which could affect the gas supply from Russia in the future. However, in the coming days the downward trend could be maintained due to the wind energy production levels and temperatures above those would correspond to this time of the year.

The TTF gas prices in the spot market last week maintained a downward trend, except on Thursday, December 12, when they rose by 0.16% over the previous day. For this Monday, December 16, the index price is €13.03/MWh, slightly higher than that corresponding to last weekend, of €12.95/MWh.

The API 2 coal futures prices in the ICE market for the month of January 2020 started last week following the downward trend of the previous week. The declines continued until Tuesday, December 10. That day a settlement price of $54.75/t was reached, which is the lowest value of the week and of the last two years. On the other hand, on Wednesday and Thursday there were increases of 0.4% and 1.1% respectively, reaching the maximum settlement price of the week of $55.55/t on Thursday, December 12. Finally, on Friday, December 13, the price decreased 1.1% to $54.95/t.

The CO2 emission rights futures prices in the EEX market for the December 2020 reference contract on Monday, December 9, reached a settlement price of €25.30/t, the highest so far this month. However, on Tuesday and Wednesday the prices dropped 0.8% and 1.8% respectively. On the other hand, on Thursday, December 12, there was a rise of 2.4%. But on Friday, December 13, the prices fell again, by 4.2%, to €24.18/t, the lowest value of the week. The evolution of the prices during the past week was influenced both by the negotiations carried out at the COP25 global climate summit and by the electoral process in the United Kingdom. 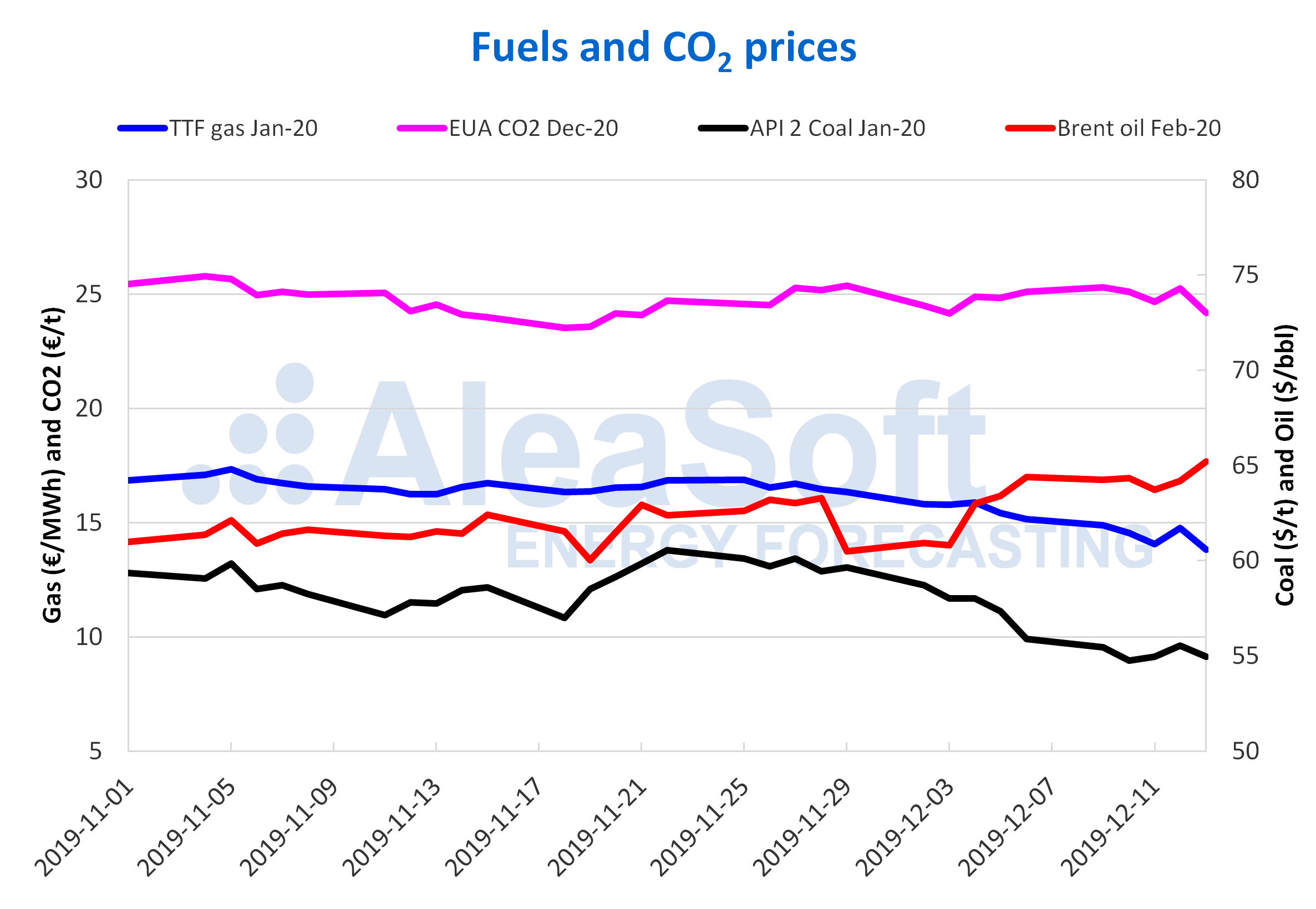