AleaSoft, December 23rd, 2019. Interview of Energética XXI magazine with Antonio Delgado Rigal, PhD. in Artificial Intelligence, Founder and CEO of AleaSoft, in the context of the 20th anniversary of the foundation of AleaSoft Energy Forecasting.

AleaSoft Energy Forecasting was born when the liberalisation of the electricity market and the growing need of the companies of the sector to have forecasting tools began. Since 1999, the company evolved into a reference for all professionals in the energy sector seeking information on market prices. Antonio Delgado, founder and CEO of the company, tells us in this interview how AleaSoft adapts to the digitalisation and transformation of the Spanish energy mix towards a future of renewable energy generation. 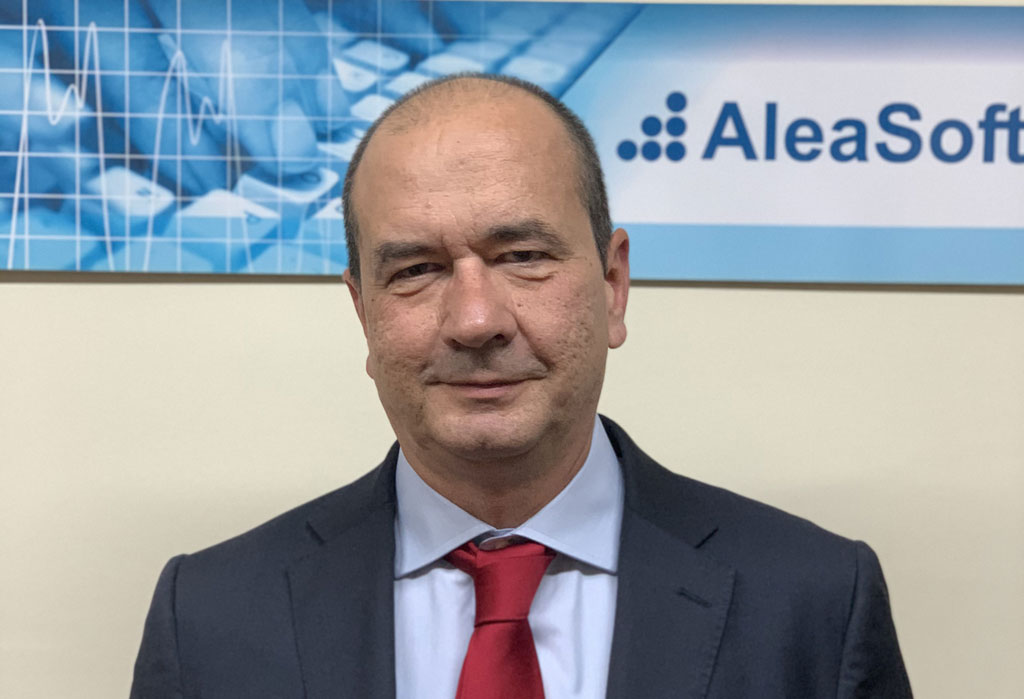 AleaSoft is celebrating its anniversary after 20 years since its foundation. What is the origin of the company?

The previous origins were researches projects and European researches carried out in the university environment. The Innova Program of the Polytechnic University of Catalonia (UPC) was created in 1999 and led to scientific work carried out at the university to be transferred to industry. That help was essential for the creation of the company in October 1999. It should be noted that AleaSoft was one of the first companies of the UPC Innova Program, which has helped to create hundreds of technology companies and also, another curious fact, our company was the first shareholding investee by the UPC.

Since October 1999, that is, since the founding of AleaSoft, we started working for Endesa and we have done it continuously until now. Then we continue the expansion to the other large companies in the country such as Iberdrola, Unión Fenosa, Viesgo, Gas Natural and so on until we work with the rest of the most important companies, with which we continue working. Also since the beginning we have been working for the largest companies in the energy sector in the rest of Europe.

How did the company experience the change that took place in Spain and Europe towards an electricity market ‑in principle‑ liberalised?

The liberalisation of the electricity market was an opportunity. Before the market existed, companies in the sector did not compete. With the competition they had to create or commission new tools to make offers and manage from another point of view. In the electricity sector, forecasts in all time horizons are fundamental in many areas. In these 20 years since our foundation we have witnessed the changes that have been occurring in Spain and Europe. We have been adapting, like the whole sector, to changing conditions, especially with regard to new electricity generation technologies.

Two decades ago, the energy mix in Spain was very different from the current one, without renewables or combined cycles. How has the methodology been adapted in these years when making the price forecasting that the company carries out?

The methodology and the Alea models are prior to the creation of the company and in these 20 years they have worked without any problem in all the change scenarios we have been having. Alea models use market balance as a fundamental aspect. Regardless of the technologies that have been emerging and replacing others, the balance has been working. More efficient and clean technologies such as wind and solar have been replacing other less efficient and pollutants such as fuel, coal and gas. The forecasts we make are scientific and consistent. In addition to the market equilibrium that existed in the past, future technologies are taken into account with their penetration and fundamental variables.

And how will these forecasts change in a scenario with a high penetration of renewable energies or new actors such as large-scale electricity storage?

The forecasts are consistent and the market we have will continue in the future. Some technologies will replace others and the balance will remain fundamental. A possible drop in prices due to photovoltaic penetration will be an opportunity to increase demand, especially the manufacture of green hydrogen, the fuel of the clean and renewable future. Consumption patterns will also adapt to new technologies.

Green hydrogen will also be the largest source of energy storage for when renewable production drops, which gas currently does. Green hydrogen will gradually replace petroleum products and natural gas in domestic, industrial and, especially, in land, sea and air transport.

Artificial intelligence or ‘soft computing’ are concepts that AleaSoft handles today on a regular basis. When did the company start incorporating this technological vision?

‘Machine learning’ allows the model to “learn” from the past and extrapolate patterns to the future modified according to the scenarios and the fundamental variables that are taken into account. 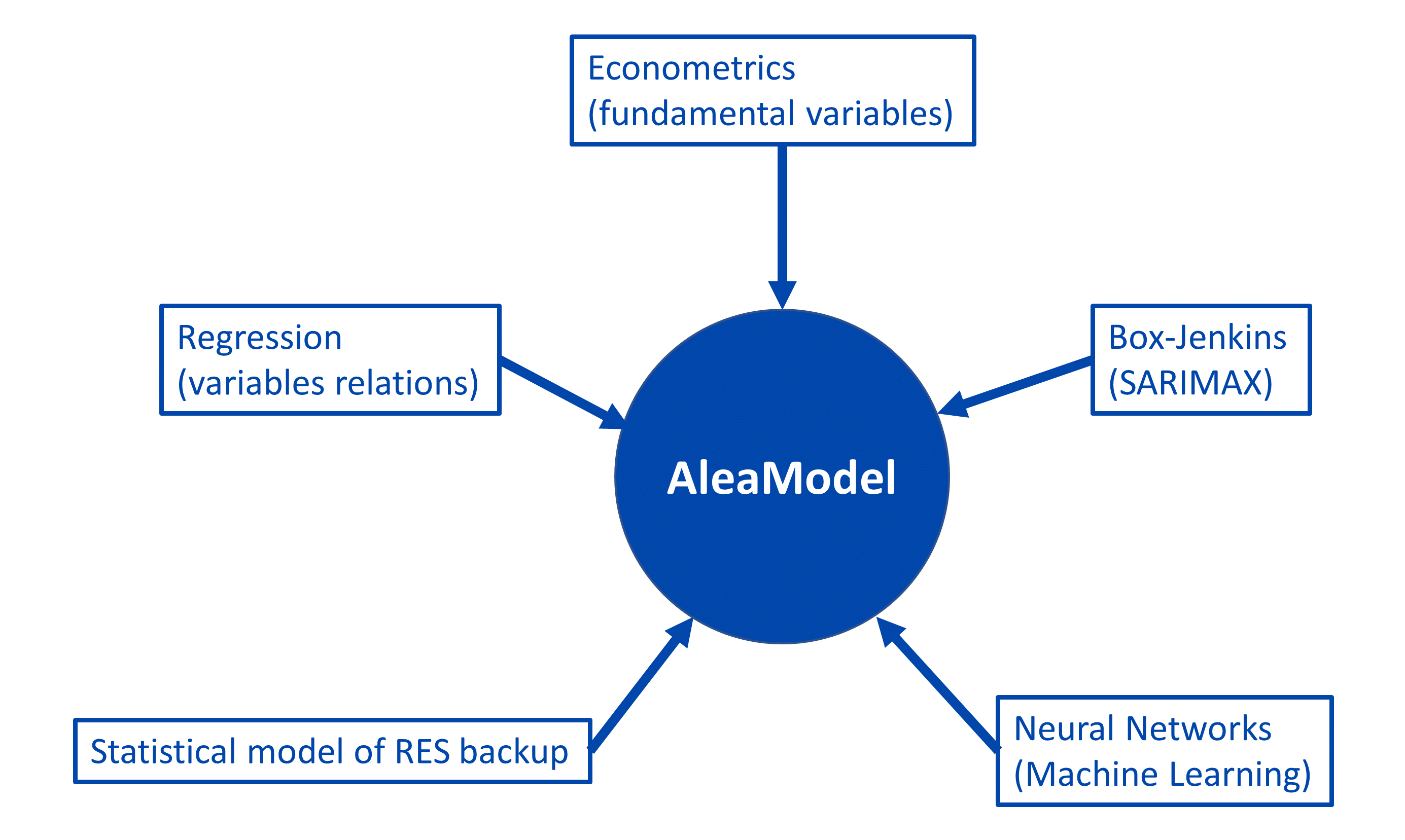 Alea methodology used in the forecasting for the energy sector.

In the energy sector we are in full transformation towards a panorama where decarbonisation, digitalisation and mass electrification changes everything. How can AleaSoft take advantage of this transition towards a new energy model?

In Europe, the current electricity and gas systems will change completely in 30 or 40 years. Europe currently imports 5000 million euros in fuel per week. In the future all that energy, plus the nuclear that will disappear, will come from renewable sources, mainly from photovoltaic and wind energy. The demand for green energy, which will be the only one, will grow to meet the needs of industry, services, domestic use and all means of transportation. Europe will become an exporter of electricity and green hydrogen.

For AleaSoft, this period of change that comes is an opportunity because all companies in the energy sector need to have a vision of the future that is only achieved by having good forecasts in all time horizons. This vision of the future that we project with only renewable production is essential for public administrations. We must make the most of the wind and solar resource to develop the most economically disadvantaged regions, especially those in the south. Both those in southern Spain and the rest of the poorest regions in southern Europe.

How has the company’s client profile evolved in these 20 years?

In the beginning our main clients were the large electricity generating and trading companies. When the combined cycles began we had new clients. The same happened with the introduction of the wind energy generation. Large consumers increasingly turn to our forecasting services to buy electricity in the short, medium and long term in the most scientific way possible. Another type of client that we have had in these years has been the Transmission System Operators (TSO) of different countries of Europe.

But the greatest evolution has occurred in the last two years with the photovoltaic revolution. Many new agents that previously did not exist have entered the electricity market or had gone abroad seeking opportunities and returned. Park developers, specialised consultants, investment funds, bank divisions dedicated to renewable energies and a new type of consumer who looks at the long term and is looking for PPA contracts.

The proliferation of plants subject to those PPA contracts that you mention makes it more necessary than ever to forecast prices in renewable energy generation plants. What experiences does AleaSoft have in this area?

Large consumers are becoming aware that they must have a vision at three, five, ten, fifteen or twenty years of horizon. A binomial has been made between park developers and large consumers by signing PPA contracts. In just over a year we have developed long-term price forecasts for more than 50 projects. We are talking about forecasts of the most important and not so important European markets in Eastern Europe.

As we are in contact with all the agents in the market, we are helping our clients to agree among themselves, that is, those who develop the parks with the large consumers who buy the energy in the long term.

In such a changing scenario as we have commented, how do you think the company will evolve in the next decade?

Our first challenge is to grow and consolidate as leaders in Spain and in Europe. Then make the leap to America and Asia. We are open to strategic alliances as an expansion vector. We have a scientific forecasting methodology that has been successful for 20 years in the main companies in the energy sector in Europe. We want to become a world reference and bring our forecasts of electricity markets prices, demands and renewable energy production to all continents.