AleaSoft, November 28, 2019. The solar energy production decreased this week in most European markets, except in the Italian market. The wind energy production increased considerably in most markets. The temperatures rose, causing the demand to fall. All these factors caused a general drop in the markets prices. However, the prices are expected to rise next week as temperatures drop.

From Monday, November 25, to Wednesday, November 27, the solar energy production decreased in most of the European markets analysed with respect to that registered between Monday and Wednesday of last week. The most notable cases were the markets of Germany and the Iberian Peninsula, which decreased by 39% in each case. The exception was the Italian market that saw its production rise by 11%. For the rest of this week at AleaSoft, the solar energy production in the German market is expected to continue to be lower than that registered last week. It is also expected that the growing trend of the production in the Italian market will continue and that in Spain the production will be greater than that of the same days of last week.

In the period between the first day of this month of November until the 27th of the same month, the solar energy production in the Iberian Peninsula was 42% higher than that registered in the same period of 2018. In the rest of the markets the generation with this renewable source remained below, highlighting the German case with 12% less. 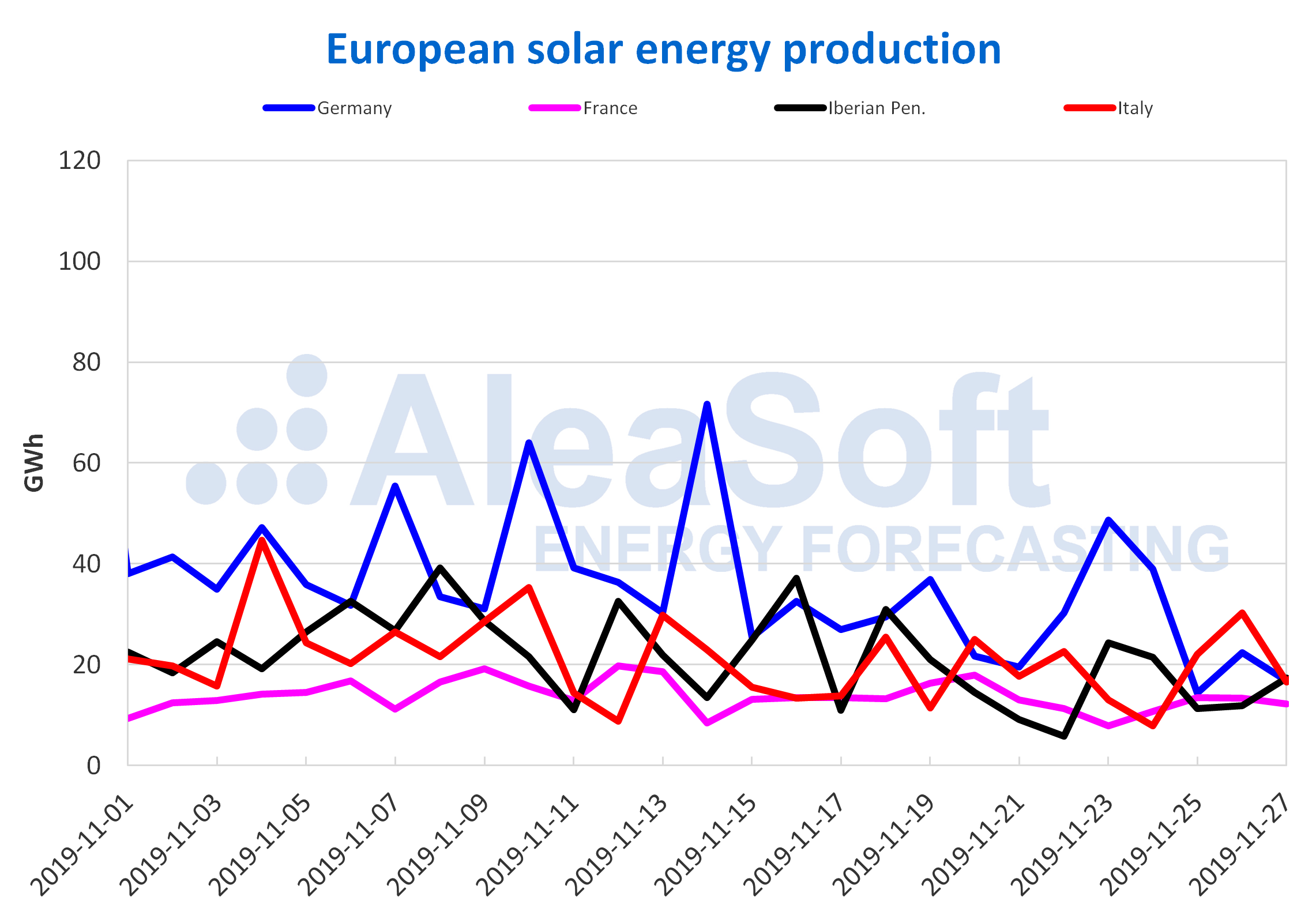 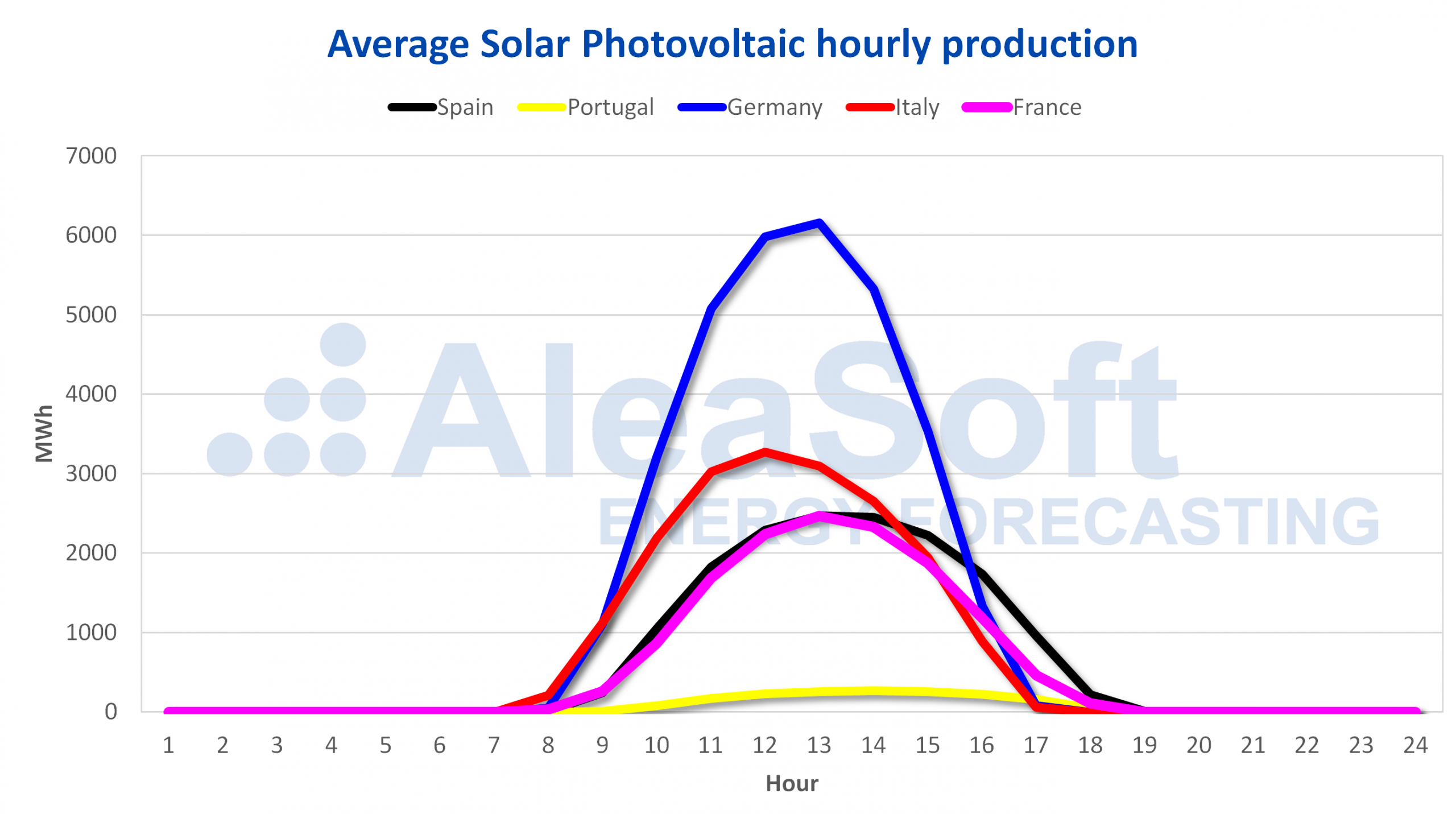 During the first three days of this week, the wind energy production increased considerably in France and the Iberian Peninsula, compared to the production registered from Monday to Wednesday of last week. The market with the largest increase was the Portuguese, which approached the triple that produced at the beginning of last week, closely followed by the Spanish and French markets which also generated more than double in the analysed period. In the case of Italy a moderate increase of 13% was observed, while Germany saw its production decrease slightly, by 2.7%. At AleaSoft it is expected that in the whole of this week the wind energy production will be higher in all the analysed markets, compared to the previous week.

Between November 1 and 27, the year‑on‑year increase in wind energy generation was maintained in all the analysed markets. The Italian market with 101% and the Spanish market with 62% continued to stand out. In the rest of the markets the increase remained below 38%, with the lowest being the German market with 4.3%. 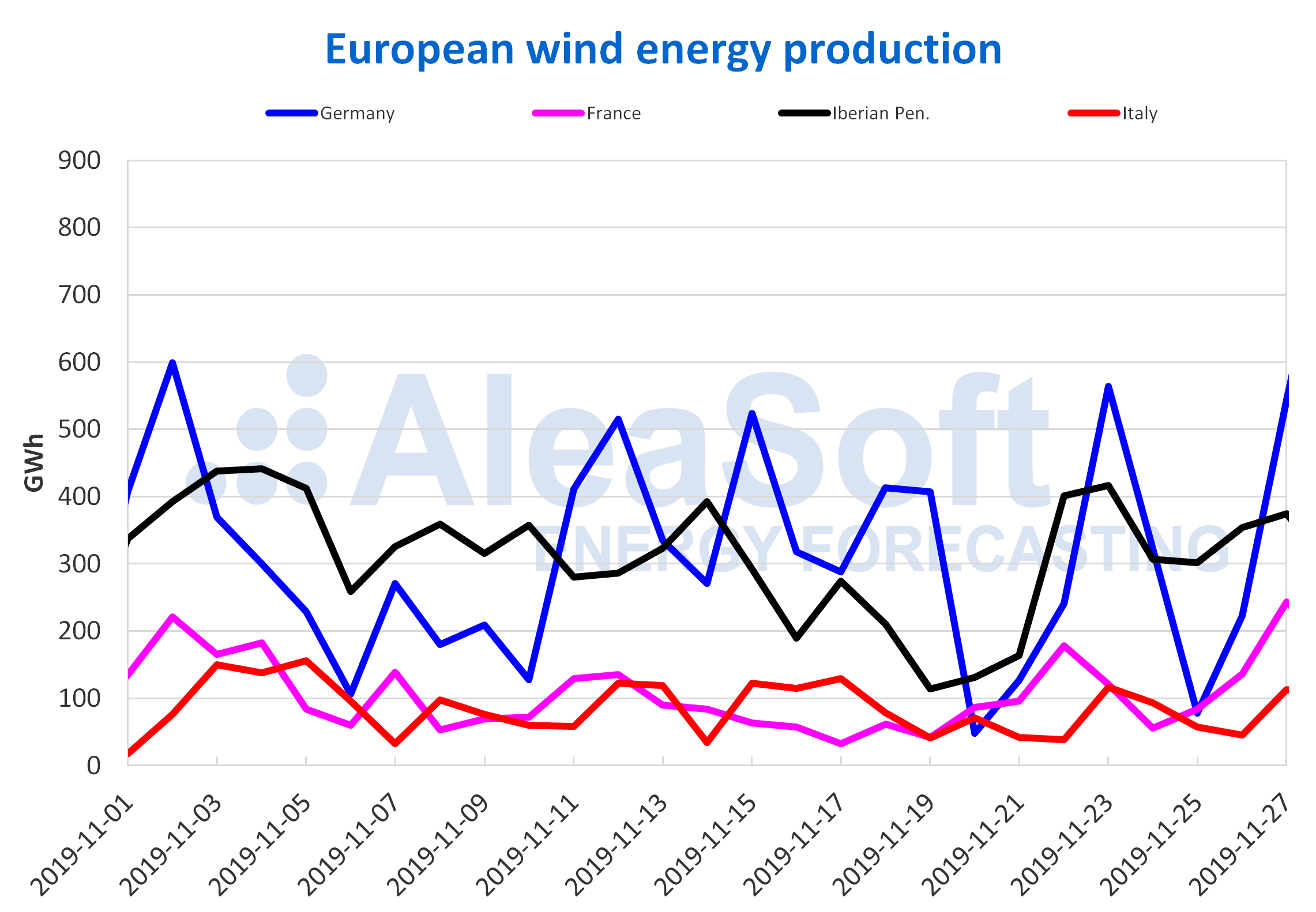 In the first three days of this week the average temperatures increased compared to the same days of last week. The behaviour of the electricity demand was consistent with that of the temperatures, decreasing in most markets between 12% and 0.8%. 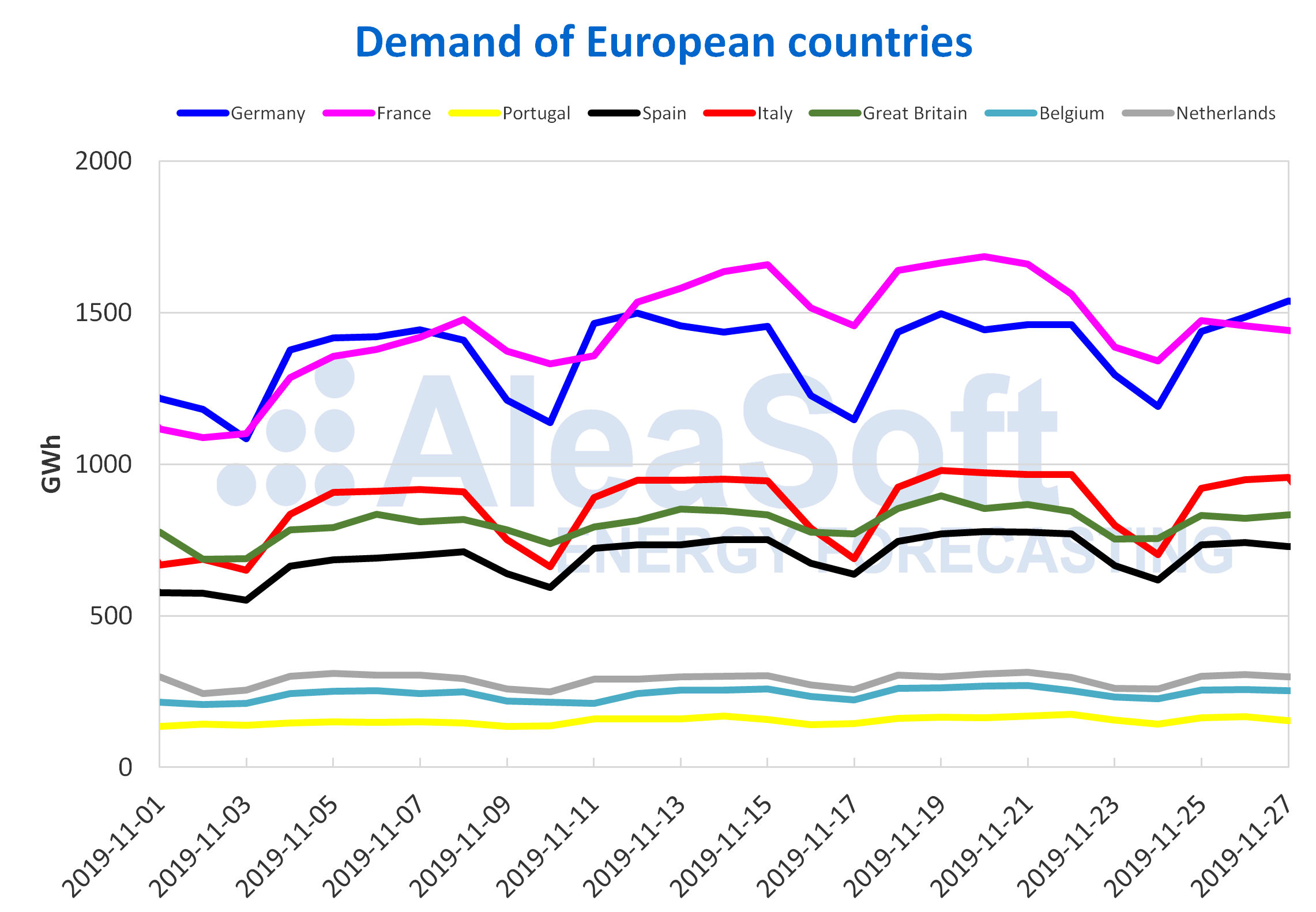 The solar energy production in Mainland Spain, which includes photovoltaic and solar thermal energy, is expected at the end of this week to be similar to the previous week, despite the 39% decrease of the first three days, compared to the same days from the previous week.

The wind energy production between Monday and Wednesday of this week was 116% higher than that registered the first three days of last week. At AleaSoft it is expected that at the end of the week the production will remain above that reached the week of Monday, November 18. 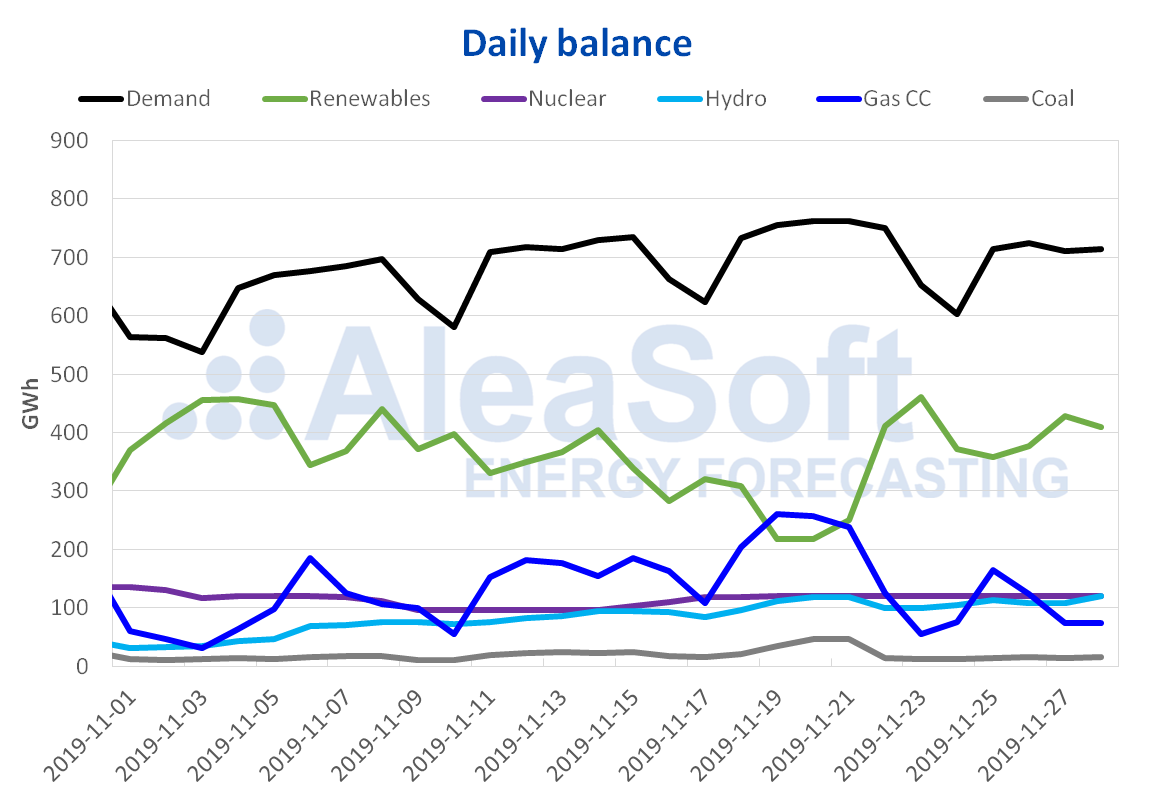 In the first four days of the week the prices of most European markets had a downward behaviour. The main fall was in the German EPEX SPOT market, where the price dropped more than €20/MWh between Monday, November 25, and Thursday, November 28. This dizzying decline places the German market on day 28 as the market with the lowest daily average price in Europe, and with a marked difference from the rest of the markets. That same day, the IPEX market of Italy and the EPEX SPOT markets of the Netherlands and Belgium were the only ones that changed their behaviour and registered increases compared to day 27. The N2EX market of Great Britain, which had been maintained for the last days since the weekend as the highest‑priced market in Europe, settled on day 28 at €51.37/MWh, just €0.03/MWh below the Italian market.

If the first four days of this week are compared with respect to the counterpart days of the previous week, of November 18, the European markets prices in general were lower. This with the exception of some days in the EPEX SPOT markets of Germany, Belgium and the Netherlands and in the IPEX market of Italy and the Nord Pool market of the Nordic countries. Where the decline has been most noticed is in the EPEX SPOT market of France and in the MIBEL market of Spain and Portugal. In the case of the French market, the average price for the first four days of this week was €45.28/MWh, €13.73/MWh lower than that of the corresponding days of the previous week. The fundamental causes of this downward price behaviour were the decrease in electricity demand due to rising temperatures and the significant increase in wind energy production. 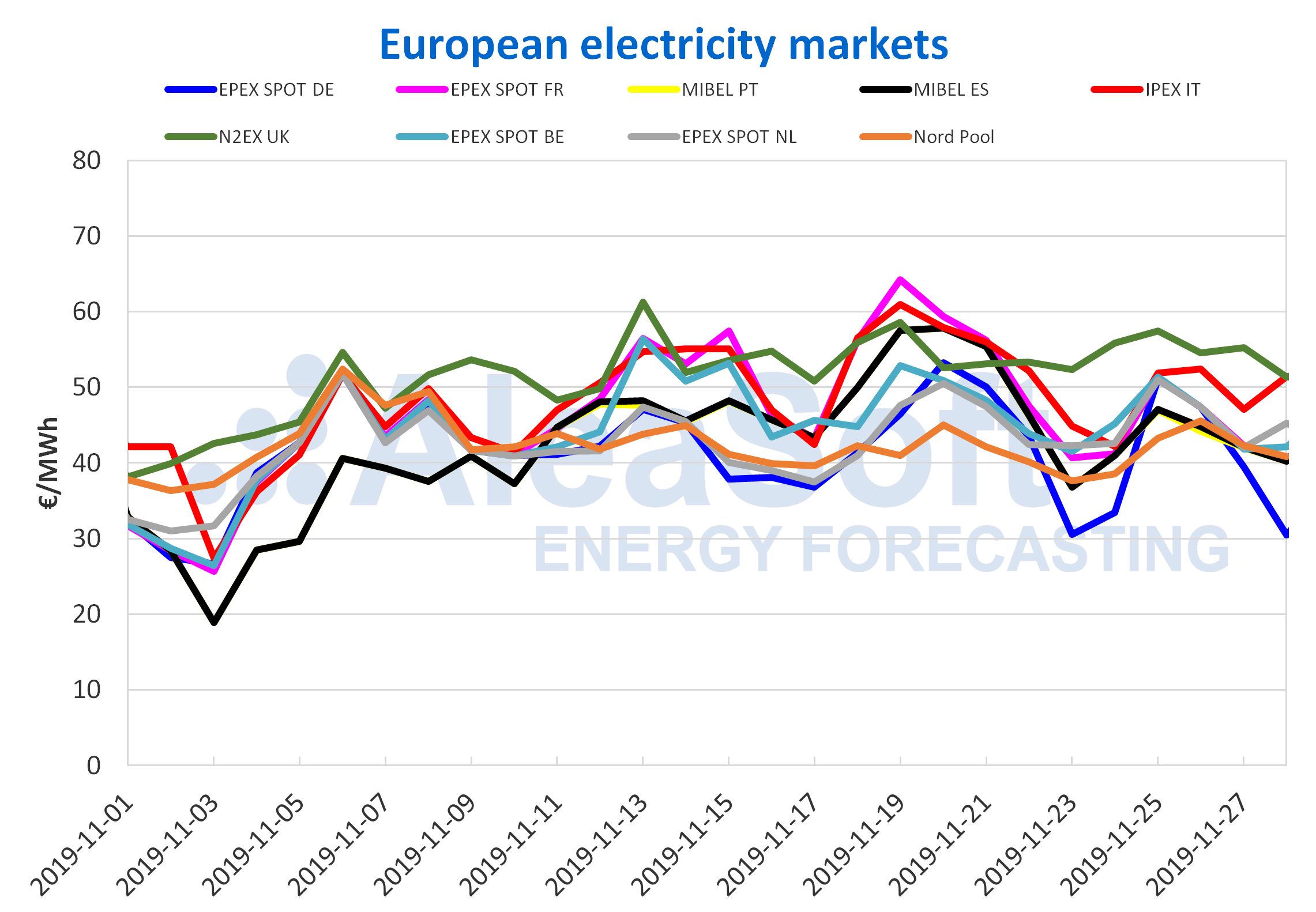 At AleaSoft, the prices are expected to remain generally stable during the rest of the week, and then rise next week due to lower temperatures.

The MIBEL market joined the price drops of this week, favoured by an increase in temperature and high wind energy production. The average price on Thursday, November 28, in Spain and Portugal was €40.21/MWh. This value placed the Iberian Peninsula at an even lower price than that of the Nordic countries in the Nord Pool market. The average price for the first four days of this week dropped more than €10/MWh in the MIBEL market compared to the equivalent days of the previous week, going from being above €55/MWh to being above €43/MWh.

The average price between Monday and Thursday of this week was €43.55/MWh for Spain and €43.34/MWh for Portugal. The coupling during those days was 94%. The trend of the daily average prices was down, decreasing almost €7/MWh between Monday 25 and Thursday 28. As in the rest of the European countries, at AleaSoft the price for next week in the MIBEL market is expected to be higher to that of this week.

The price of the electricity futures markets for the first quarter of 2020 product settled on Wednesday, November 27, with values ranging from €43.45/MWh of the NASDAQ market of the Nordic countries to €58.47/MWh of the Italian EEX market. The EEX market of Germany was the one with the lowest variation compared to the settlement price of last Friday, November 22, with a decrease of 0.2%. On the other hand, the Italian EEX market was the one with the greatest variation, with an increase of 1.2%.

As for the electricity futures for the year 2020, the settlement prices of the November 27 session varied in the range of €37.44/MWh to €57.55/MWh, these being the cases of the ICE market of the Nordic countries and the EEX market of Italy, respectively. At the end of this session, a price of €51.75/MWh was set in the OMIP market for both Spain and Portugal, this being exactly the same settlement price than that of Friday 22. On the contrary, the NASDAQ market of the Nordic countries registered the greatest change compared to that day with a decrease of €0.36/MWh, which represents a change of ‑1.0%.

The Brent oil futures prices for the month of January 2020 in the ICE market started the week with an upward trend. As a consequence, on Tuesday, November 26, a settlement price of $64.27/bbl was reached, which is the highest so far this month. However, on Wednesday, November 27, the price fell 0.3% compared to the previous day, reaching a value of $64.06/bbl.

The possibility that China and the United States reach a trade agreement soon favoured the prices reaching the maximum value of Tuesday, November 26. The subsequent fall in prices was related to the increase in US production and crude oil reserves.

On the other hand, the OPEC + meeting in which it will be decided whether production cuts will be maintained after March 2020 is scheduled for the next week. It is expected that the outcome of this meeting will influence the evolution of the prices in the subsequent days.

The TTF gas futures prices in the ICE market for the month of December started this week maintaining the upward trend of last week. But on Tuesday the price dropped 2.4% compared to Monday, to €15.85/MWh. On Wednesday, it increased again reaching €15.98/MWh.

The API 2 coal futures prices in the ICE market, for the month of December, during the first days of this week remained stable. Its value ranged between $58.95/t on Tuesday, November 26, and $59.25/t on Wednesday, November 27. The settlement price of Wednesday coincided with that of Friday of last week and it is the highest value registered so far this month.

The CO2 emission rights futures prices in the EEX market for the December 2019 reference contract started this week of November 25 with a downward trend, which remained until Tuesday, November 26. This day, a settlement price of €24.38/t was reached. But on Wednesday, November 27, there was an increase of 3.0% and the settlement price was €25.11/t. Values higher than €25.00/t had not been registered since the first days of the month.

This change in trend is related to the possibility of increasing the coal energy production due to lower temperatures and the problems in the French nuclear power plants. These problems could lead France to increase the import of electricity from Germany, where the production of the thermal power plants would increase. Depending on the evolution of nuclear energy availability in France, the emission rights futures prices could continue to rise. 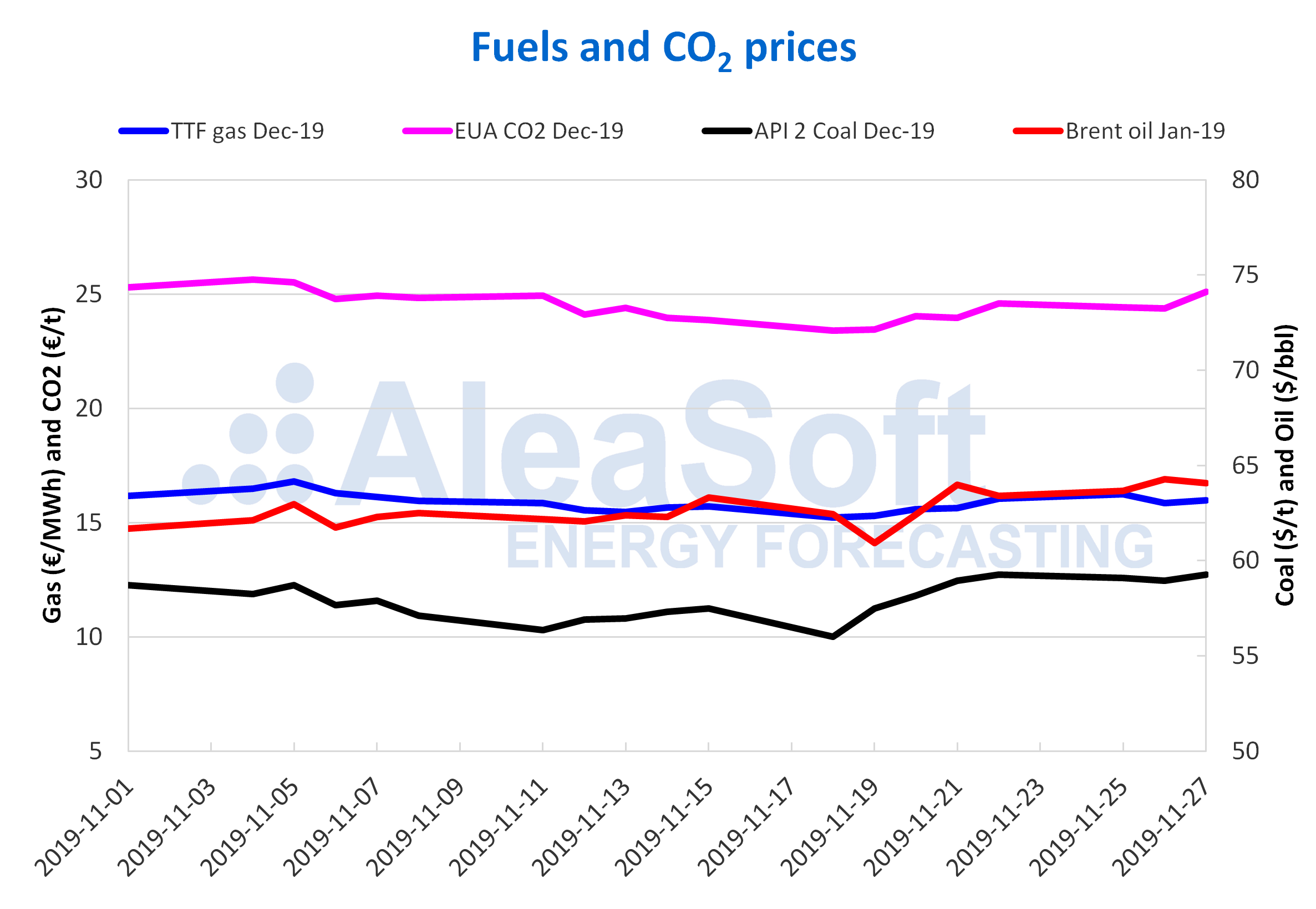