Alea models, twenty years of artificial intelligence in forecasts for the energy sector

AleaSoft, November 27, 2019. The forecasts in the energy sector have always been very necessary due to their high strategic value. We are talking about forecasts of energy markets prices, of electricity and gas demand, in addition to the renewable energy production. All of them are key figures to have a vision for the future of the energy sector and to be able to plan and make decisions in a responsible, scientific and informed way.

Historically, the forecasting models in the energy sector were classified into two large groups. On the one hand, there are statistical base models, which include time series analysis, Box‑Jenkins methodology, regressions with variables and self‑regressions, among many other statistical techniques. This first group also includes artificial intelligence and machine learning models such as artificial neural networks and support vector machines.

In the other large group are the so‑called fundamental models. These models are based on the simulation of individual behaviour or small groupings of each of the market agents in the future. These models try to predict the result of the market based on the buying and selling strategies of each agent by applying game and competition theories and optimising the income of each agent.

The Alea methodology for the forecasts in the energy sector

The Alea models were created more than twenty years ago, before the liberalisation of the Spanish electricity market. The artificial intelligence techniques existed since the seventies of the last century, but it was not until the late nineties that computer technology was prepared to exploit its full potential.

The hybridisation of classical statistical techniques, such as regressions, of time series analysis and Box‑Jenkins SARIMAX models, and of artificial intelligence techniques, such as the recurrent neural networks and the machine learning algorithms, led to the development of the first Alea models, always with the objective of modelling and forecasting time series for the energy sector. 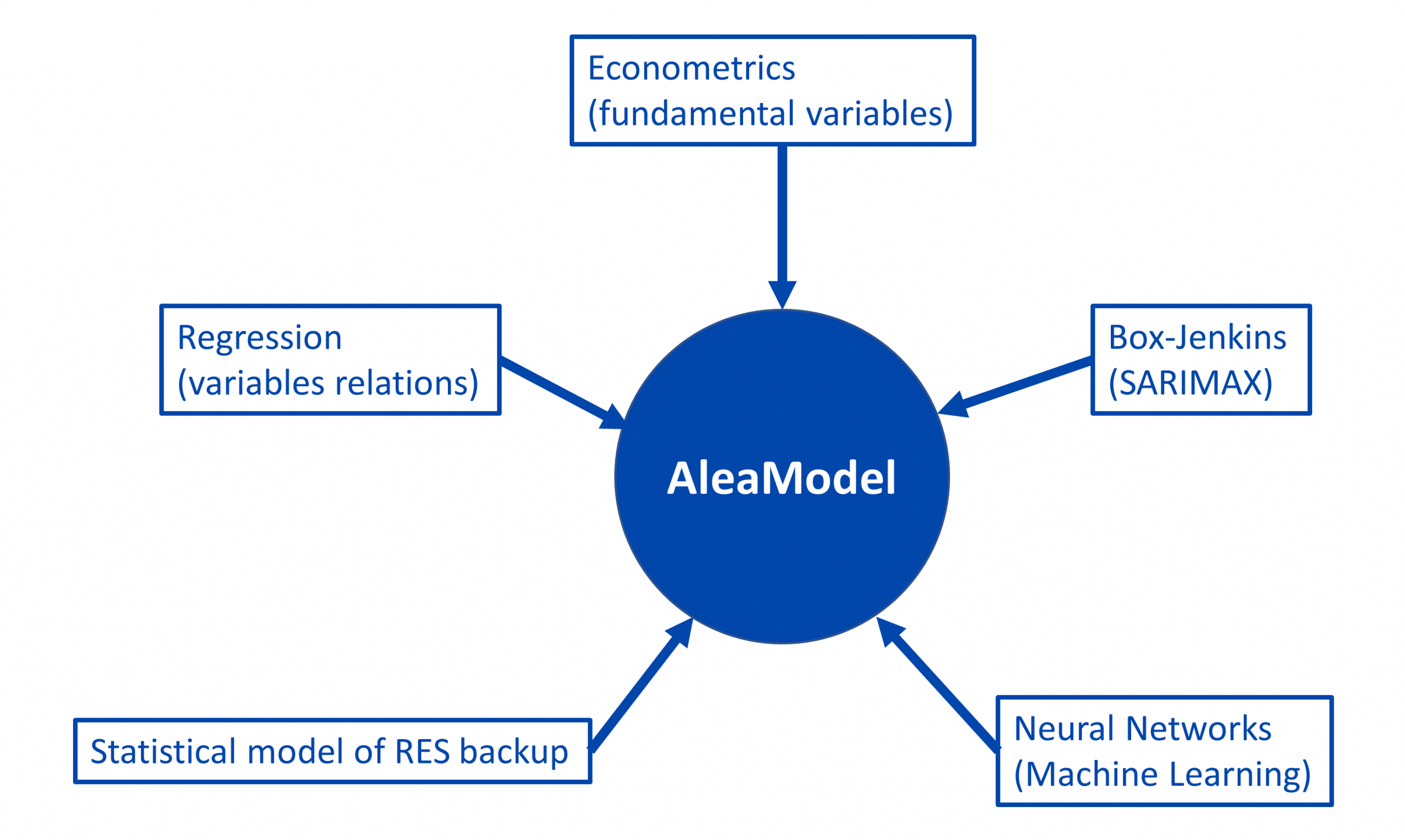 Components of the Alea models

In those early stages of the electricity market, the Alea models were used to forecast electricity demand, and their users could only be the few agents of that emerging electricity market that were, at the same time, the generators, distributors and retailers. The demand forecasts from short to long term allowed these users to plan in all time horizons.

The success of the Alea models in forecasting electricity demand soon made the models begin to be used by the electricity system operators in several European countries. And some of them continue to use the models today.

Shortly afterwards, Alea models were developed for market price forecasts, which can model both price series and offers to buy and sell energy in the markets, and which also take into account the fundamental variables of the future. The typology of users diversified a lot since the models began to be useful for practically all the agents of the European electricity markets: operators of generation facilities, retailers, traders and large consumers.

But the applications of the Alea models are not limited to the daily market. Currently, forecasts for subsequent markets are made: intraday markets, imbalances, restrictions, etc. Together with the development of Alea models for market price forecasts, renewable energy forecasts were also developed: hydroelectric, wind and solar (photovoltaic and solar thermal) energy, which are also of great interest to market agents. 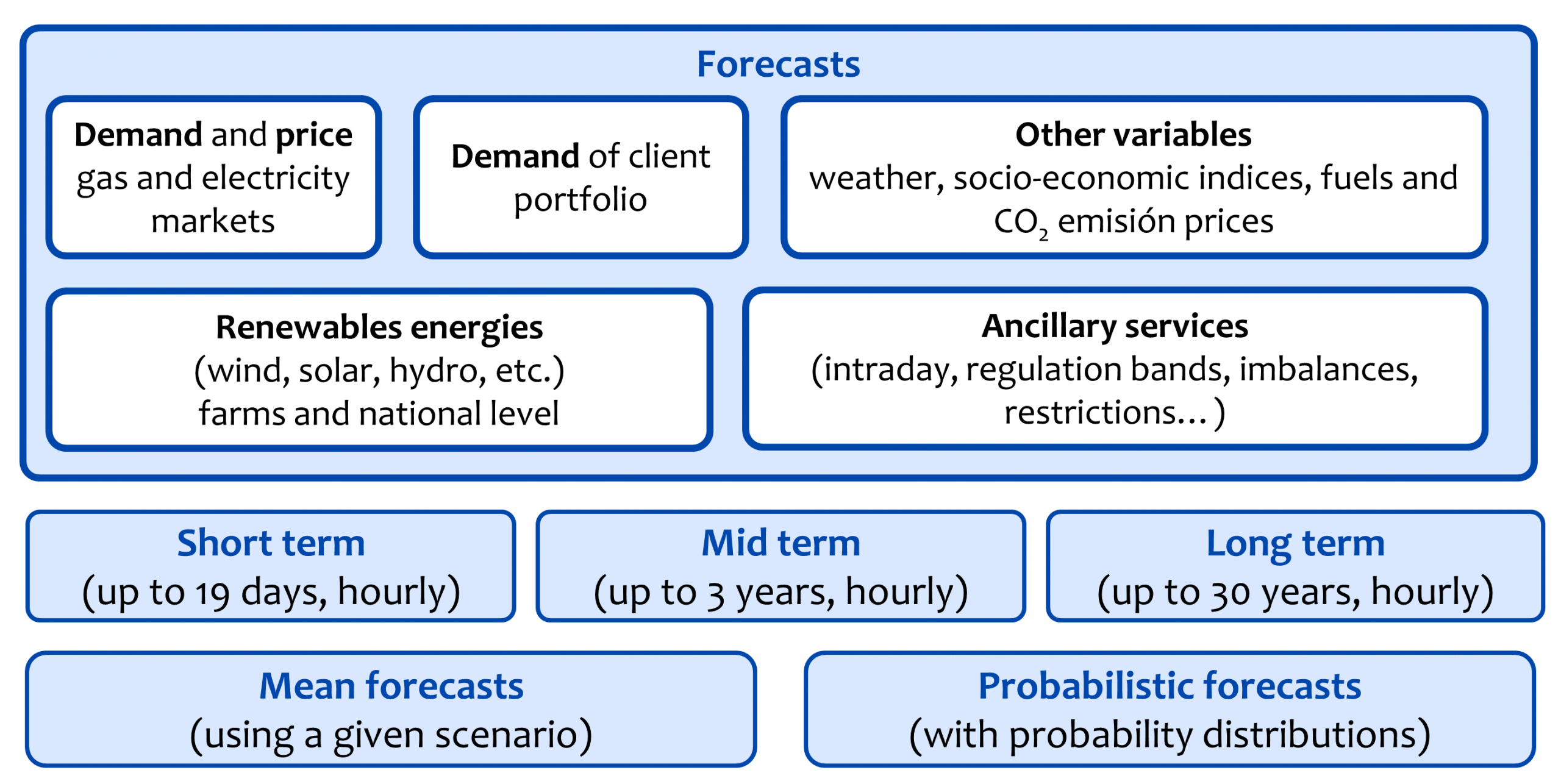 Over time, new techniques were developed around Alea models that allowed us to implement more complex forecasts. Currently, Alea models, which could already be called Alea applications because of their complexity, allow the execution of a multitude of forecasts to make simulations under variations of the variables and to calculate percentiles and confidence bands around the average forecast. This option of the Alea models is extremely useful for the risk management of both electricity producers and retailers or large consumers.

For example, advising world leading companies on industrial products with very high energy consumption, or electro‑intensive companies, the use of mid‑term forecasts and AleaSoft probability distributions for several European markets allows savings of between 10 and 15% in electricity costs thanks to the opportunities found to close favourable positions in the futures markets in addition to having a long‑term planned purchasing strategy.

On the side of the sale of energy, the long‑term forecasts and the AleaSoft‘s strategic consulting allowed builders of renewable energy production plants to obtain financing from European banks. The forecasts of the Alea models have been considered bankable and allow banks and investment funds to make robust and reliable financial studies. In addition, with these twenty years of presence in the energy sector, AleaSoft built a network of customers that allowed buyers and sellers of energy production assets to be contacted and facilitated the negotiation of PPA contracts. 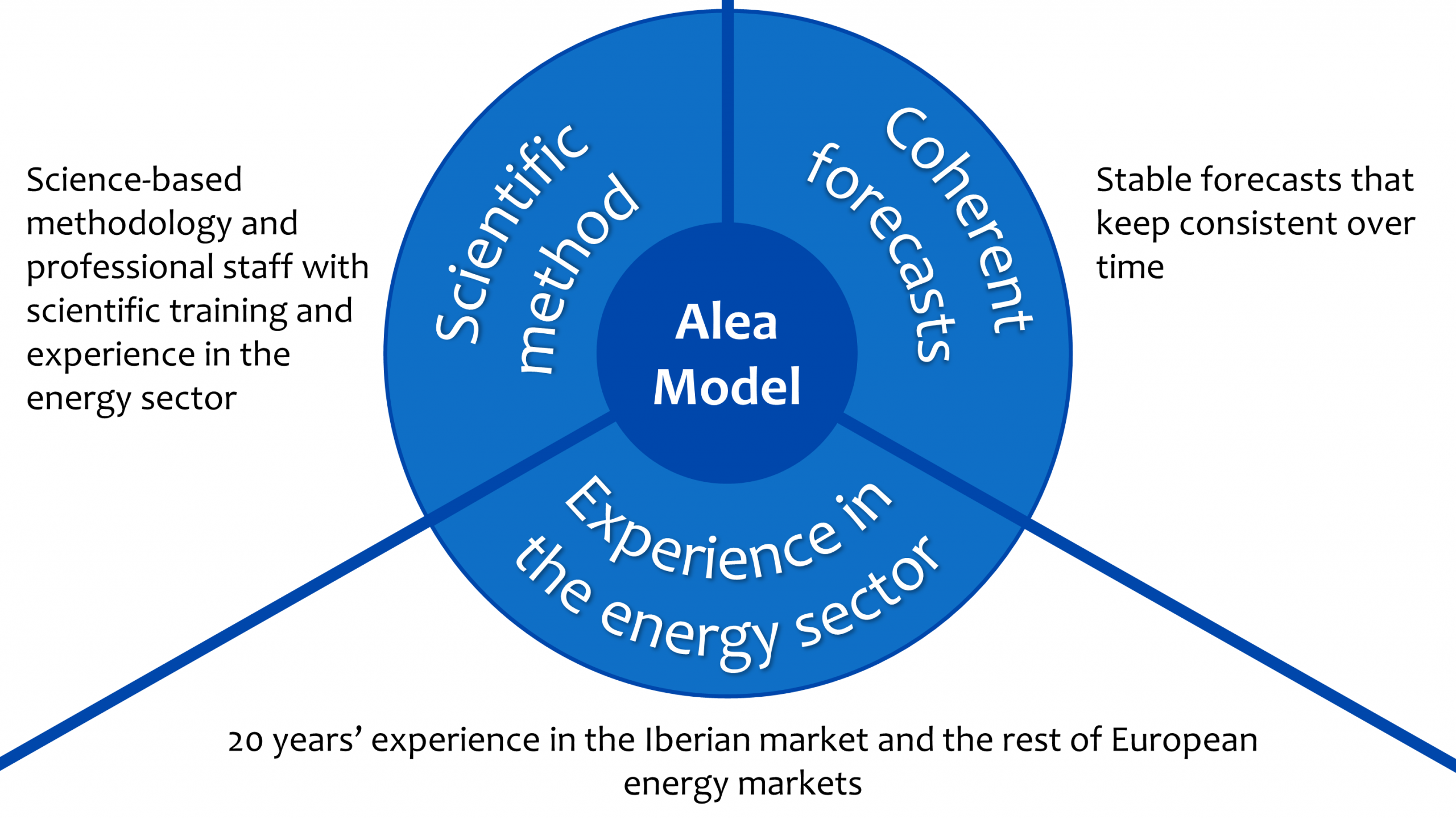 Alea models for forecasts for the energy sector

The long‑term forecasts in the energy sector

The long‑term forecasts present a very interesting challenge for any forecast model in the energy sector. The Alea models calculate the balance point of the market throughout history and project it into the future, also taking into account the fundamental variables and the support gap for renewable energy. In the long‑term future of more than twenty years, the conditions, the variables and the scenarios can vary greatly. There will be technological changes (more efficient photovoltaic cells, batteries with greater storage capacity, smart grids, etc.), changes in the demand behaviour (flexibility, self‑consumption, battery storage, hydrogen production, etc.) and replacement of energy sources (electrification and use of hydrogen in land, sea and air transport, and in industry) that will impact on the cost of energy production and the demand, and therefore on the market balance point.

All these changes will be happening and the market will adapt. The market balance, which is the meeting point between buyers and sellers, will also change because the cost of energy production will fall and because the demand will increase. But beyond the inevitable price variations due to short‑term phenomena (very windy years, periods of drought, fluctuations in fuel prices due to geopolitical conflicts, etc.), in the end, in the long term, the market has to be in balance, because the production must be profitable and the cost of consuming energy must be affordable. If not, the market disappears. In the long term, the Alea models project how this market balance will evolve. 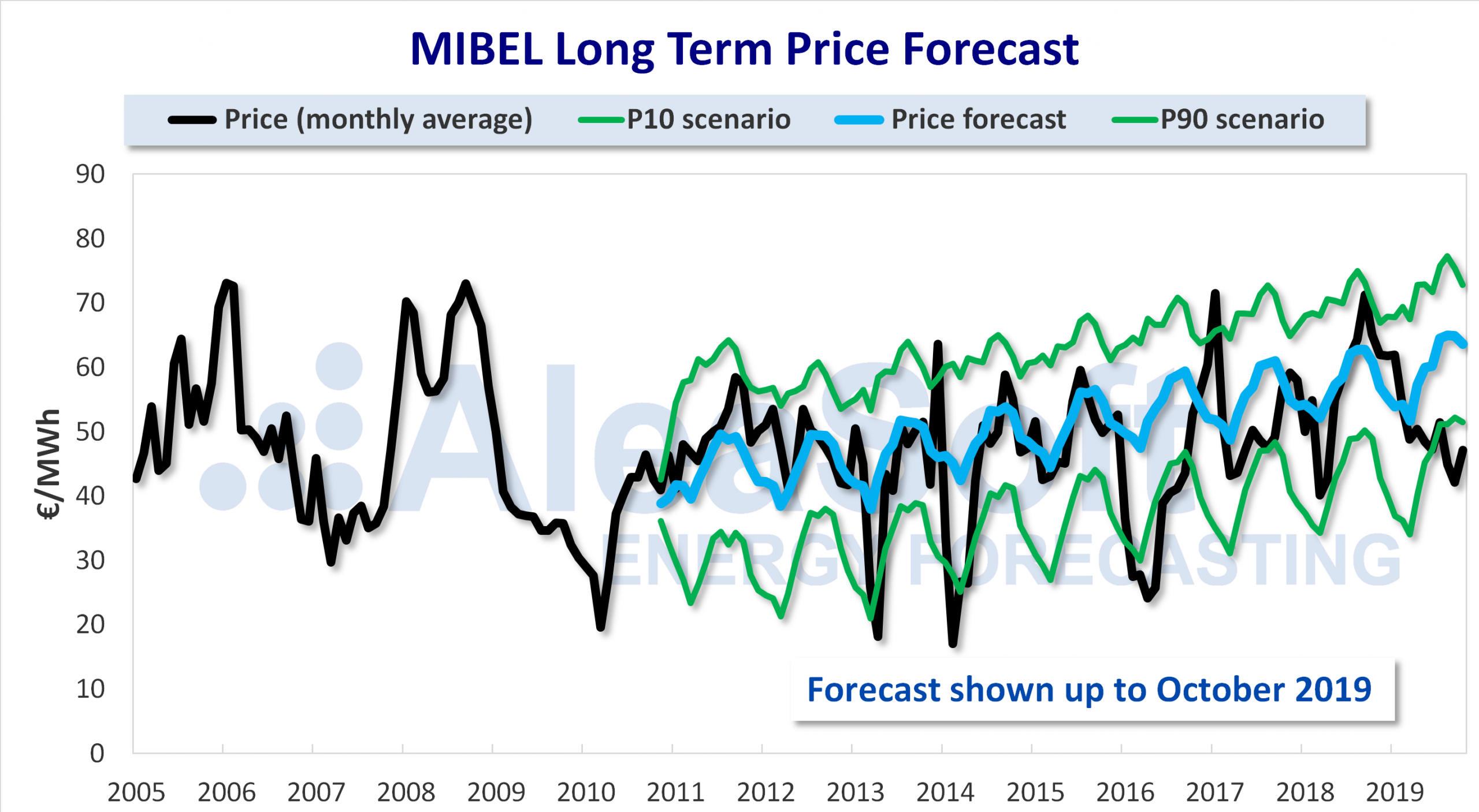 The present and future of the Alea forecast models

We currently have more than 400 Alea models in operation for virtually all gas and electricity systems and markets in Europe. Although Alea models evolved over time, the robustness, stability and solid scientific basis of the first models is still present, but, in addition, with all this time, neither more nor less than twenty years, we gained experience. This experience gained over the years was also possible thanks to the feedback provided by the users of the models. Among them are the main companies in the Iberian and European energy sector: Endesa, Iberdrola, Naturgy, Viesgo, Repsol EYG, BBE, Shell, Engie, Siemens Gamesa or Acciona. Some of them have been using the Alea models uninterruptedly for twenty years. 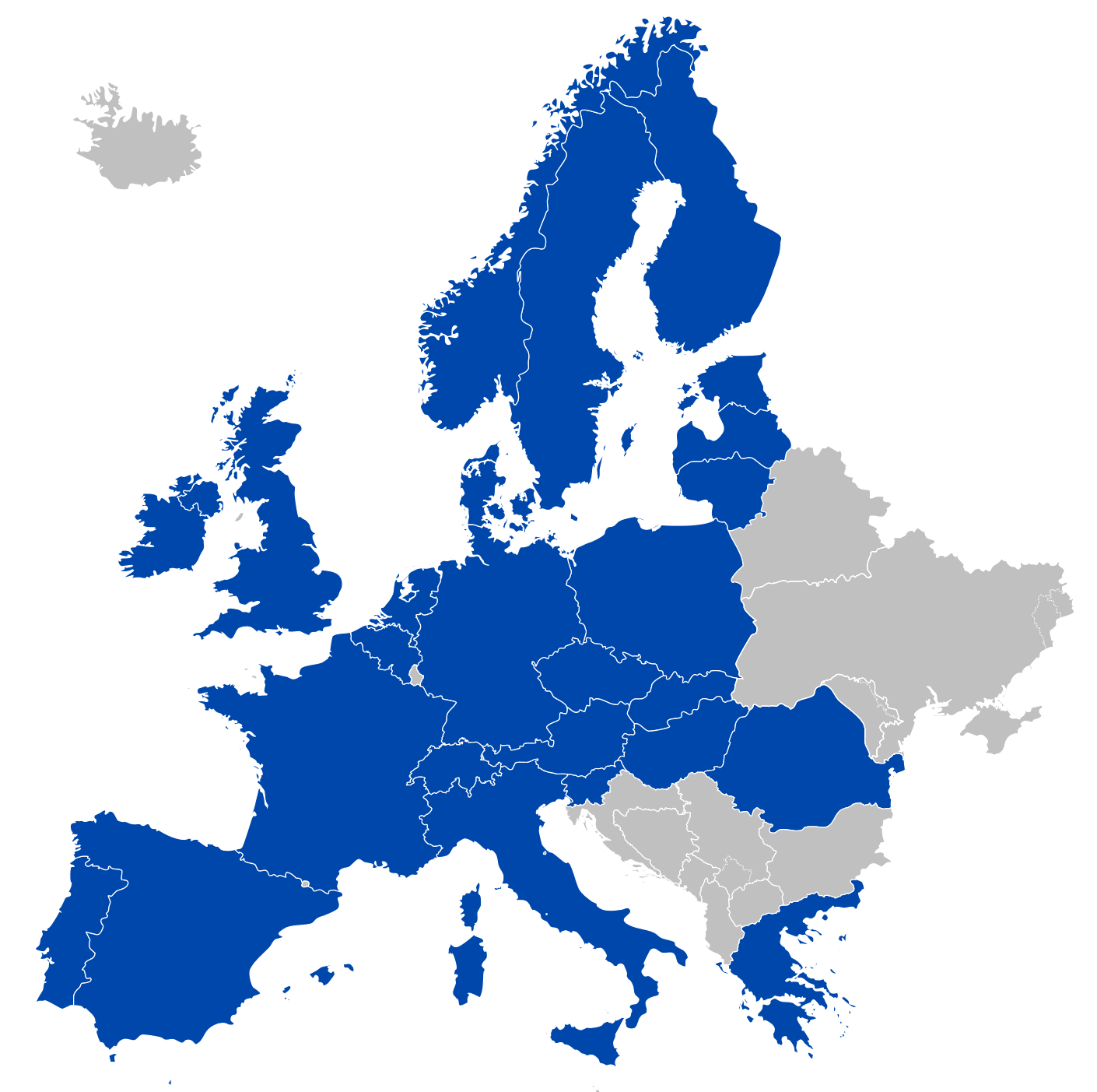 AleaSoft aims to expand globally to be able to be present in all energy markets in the world. For this, new models are being developed for the markets of America and Asia.