The solar energy production increased by 33% in November in the Iberian Peninsula, compared to the production registered in November 2018. This increase was due to the photovoltaic energy production of the Spanish peninsula that was 40% higher. Until October 2019, the installed capacity of photovoltaic solar technology in mainland Spain grew by 41% compared to the available power at the end of last year, this being the fundamental reason for the increase in production. However, in the rest of Europe, solar production fell year‑on‑year. The biggest decline occurred in Italy, of 11%.

On the other hand, solar energy production in November fell compared to production in October in all markets due to the decrease in sun hours as autumn progresses. 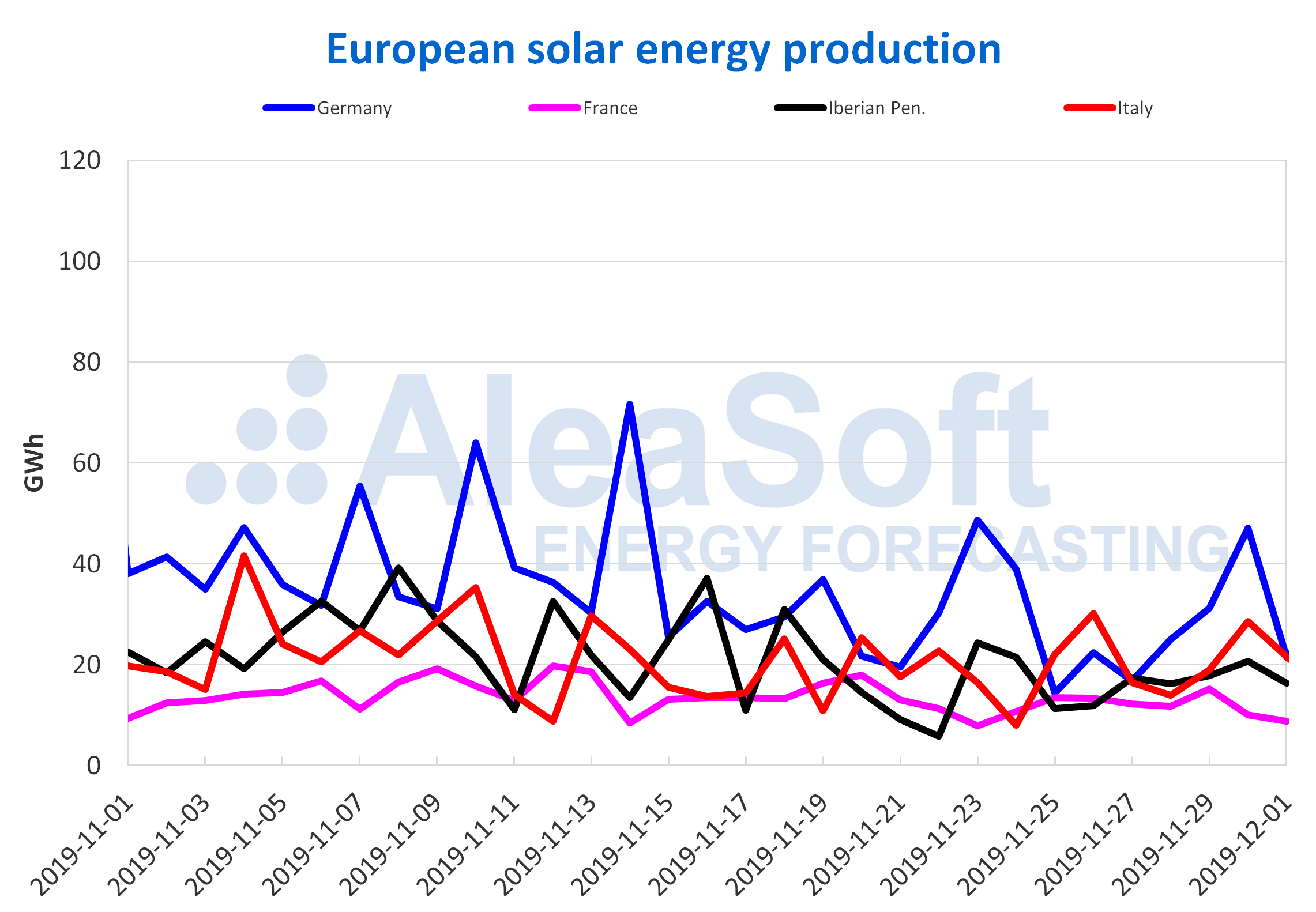 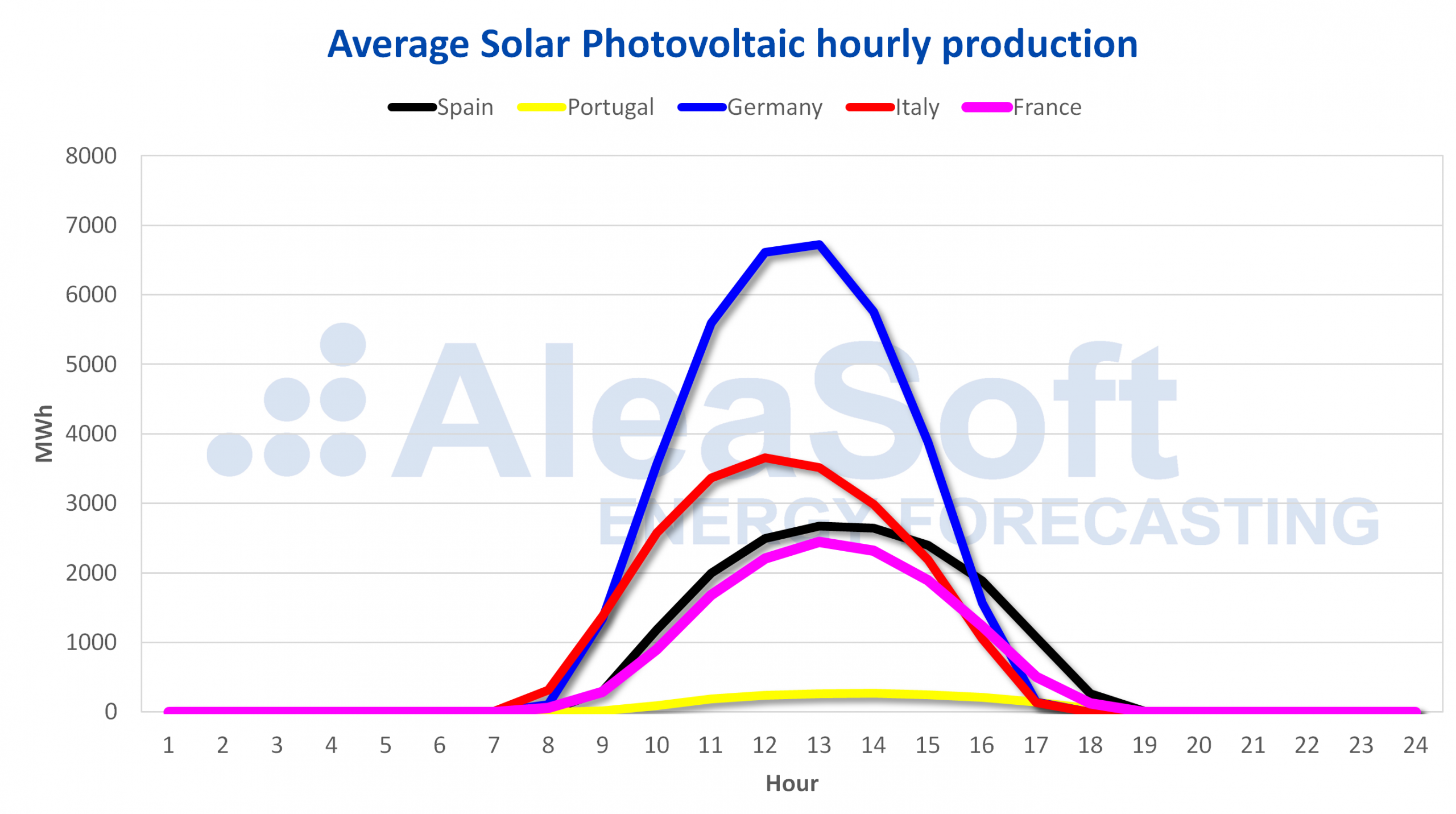 The wind energy production has behaved very favourably in the just concluded month of November. In all European markets analysed at AleaSoft there were year-on-year increases, ranging from 3.8% in Germany to 93% in Italy. The data is also very positive if the production of November is compared with that of last October, with the exception of the German market in which production with this technology fell by 8.2% and the French market which registered a slight growth of 2.5%, in the Iberian Peninsula as a whole and in Italy there were increases above 100%.

In the last week of November, wind energy production increased in all markets, with the 41% of the French market being the largest increase in the analysed markets. On the other hand, for this first week of December, production is expected to fall in most markets except in Germany. 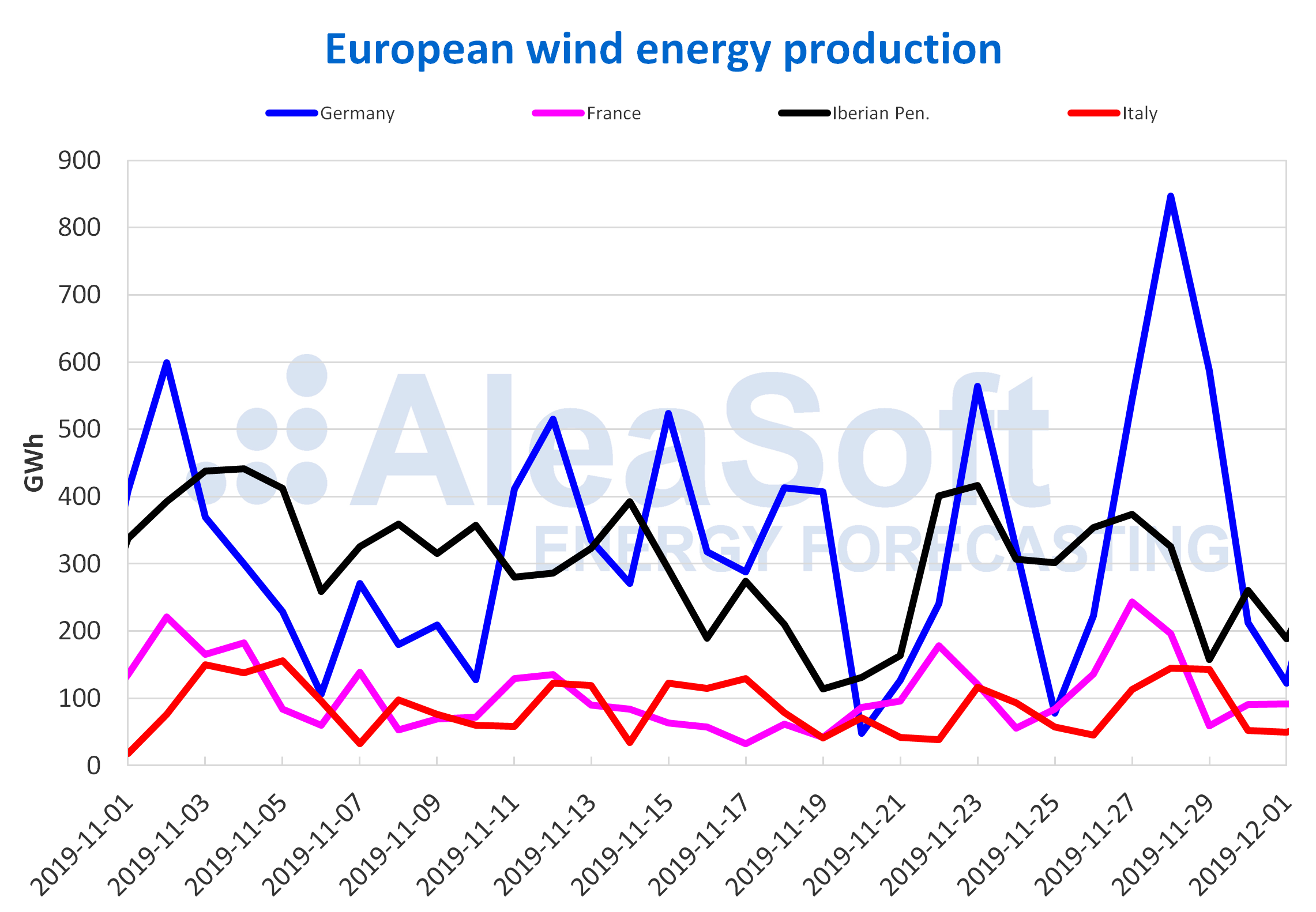 In November, as we approach winter, temperatures in Europe dropped compared to October, which caused increases in electricity demand, as discussed in the AleaSoft’s news. However, the year‑on‑year demand analysis in November shows uneven behaviour at European level, with increases in France, Portugal, Great Britain and Belgium and declines in Germany, Spain, Italy and the Netherlands.

In the week of November 25 there was an increase in temperatures at European level that led to a decrease in demand in the continent, with the exception of the German market where it increased by 1.6%. This week, temperatures are expected to fall again throughout Europe and for electricity demand to rise. 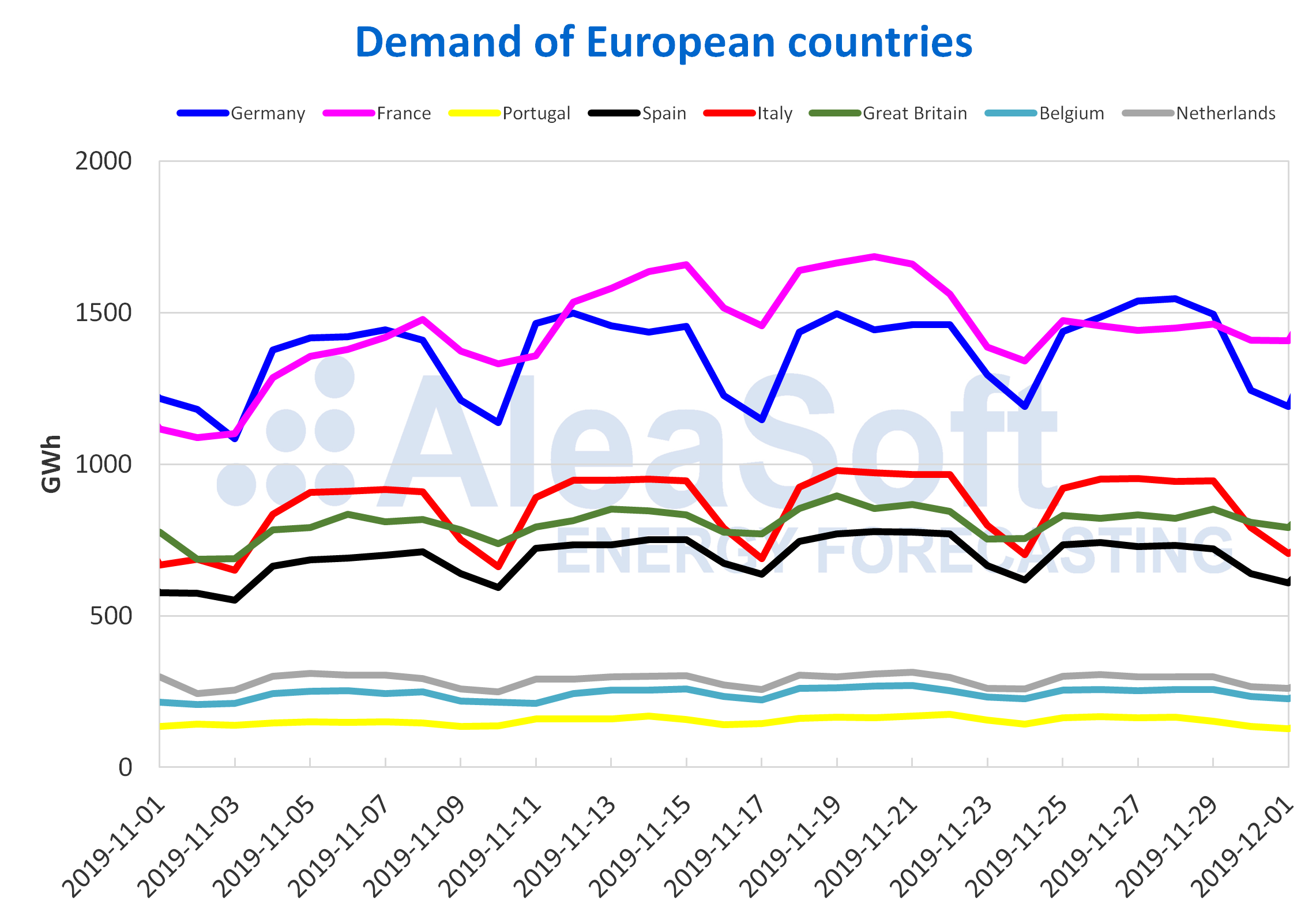 In the month of November recently completed, most of the European electricity markets registered marked price differences compared to the previous month, both in increases and decreases. The market with the lowest change was the Italian IPEX, with a decrease of 8.8%. On the other hand, the biggest decrease was that of the MIBEL market, which in the case of Portugal ended November with an average price of €42.13/MWh, which represents a variation of 11% compared to the average price of the previous month. As for the markets that increased their price, the most notable was the case of the N2EX market of Great Britain, which averaged last month a price of €51.80/MWh, this value being 23% higher than the one of last month.

The average temperature during last November was lower compared to the previous month in all the analysed markets. This drop in temperatures increased demand in most of the electricity markets in Europe. This factor forced prices up. On the other hand, during the second half of November, more comfortable temperatures and abundant renewable energy production, mainly wind energy, were recorded in most of Europe. The high generation with this technology is one of the factors that contained prices.

However, when an analysis is made with respect to the month of November of the previous year, 2018, all statistics coincide in a generalised decline. All European markets analysed at AleaSoft had an average price in November 2019 notoriously lower than in November 2018. The Nord Pool market of the Nordic countries is the one that presented the smallest difference, of 13%. The most important decline was in the EPEX SPOT market of Belgium, which had an average price this November of €44.40/MWh, which represents a 43% year‑on‑year decrease. This price was almost half the price of a year ago mainly due to the fact that in November 2018 Belgium had only two of its seven nuclear reactors available and this situation of low supply guarantee joined a cold wave in Europe, shooting prices in this market.

The fundamental causes of the year‑on‑year prices decline were the significant increase in wind energy production together with the year‑on‑year fall in prices of TTF gas and API 2 coal, which were 42% and 34% respectively.

In the last market sessions, the prices of the main European electricity markets took an upward trend. According to the analysis carried out at AleaSoft, this trend is expected to remain slightly and finally the average price of the first week of December will be higher than that of the last week of November. 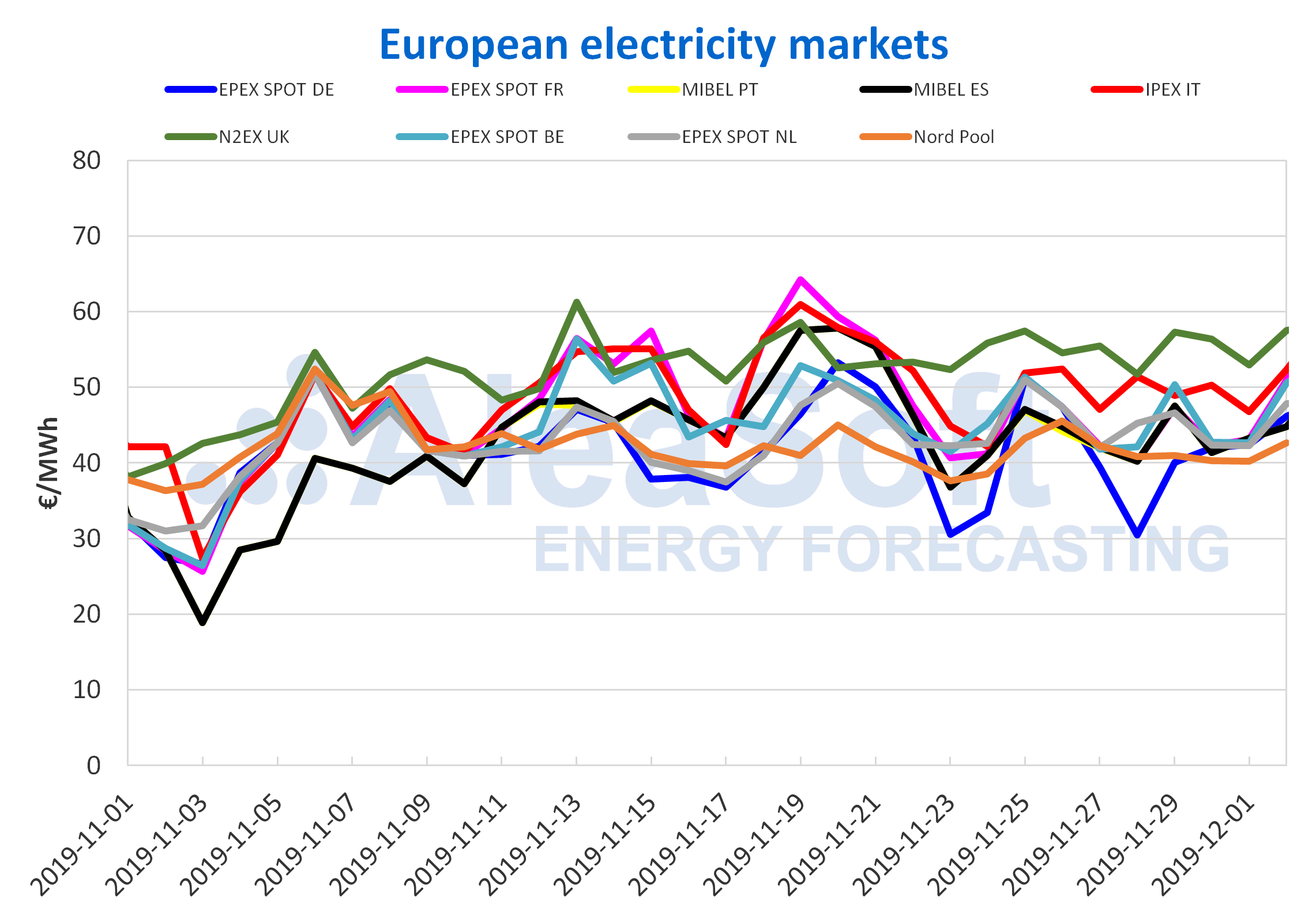 Regarding the price of electricity futures for the next quarter (Q1-20), the net difference when comparing the first and last November market sessions is negative in most European markets. The only increases were recorded in the EEX market of France and in the Nordic countries, both in the ICE market and in the NASDAQ market. The market with the lowest variation between the beginning and the end of the month was precisely the EEX market of France, which between the analysed sessions had a difference of €0.47/MWh, representing a 0.8% increase. At the other side are Spain, both in the EEX market and in the OMIP market, and Portugal in the latter market, which registered a 7.5% drop.

Electricity futures for the year 2020 also ended the month with a lower price than the one they started with. In this case, only the Nordic countries, both in the ICE market and in the NASDAQ market, registered increases of 2.8% and 2.7% respectively. The market with the lowest variation was once again the EEX market of France, with a net decrease of only €0.11/MWh, which represents a 0.2% decrease. Also for this product, the market with the greatest variation was the OMIP market of Spain and Portugal, with a 6.1% drop, followed by Spain’s futures in the EEX market with a decrease of 5.9%.

The Brent oil futures for January 2020 in the ICE market began last week with an upward trend and settled on Tuesday, November 26, at $64.27/bbl, its highest value since September 16 of this year. However, at the end of the week, the price of the barrel fell to $62.43 after the increase in production and in US crude oil reserves. Throughout the month of November, Brent oil futures for January 2020 remained in the band of $60.91/bbl to $64.27/bbl, registering a monthly average of $62.71/bbl. During November, the movements of this market were fundamentally conditioned by the climate around the US-China trade war, concerns about the slowdown of the world economy and expectations regarding the meeting of OPEC+ members at the end this week where it will be decided if the production cuts will be extended.

The lowest settlement price during last November of TTF gas futures for December this year was €15.23/MWh and was reached on November 18. While the highest value was recorded on November 5 and was €16.79/MWh. TTF gas futures for December this year were influenced throughout the month of November by high levels of gas reserves and excess of supply, forcing prices in this market down. Other fundamental factors in the prices of this product were the evolution of the temperatures and the wind energy production.

The prices of the CO2 emission rights futures in the EEX market for the December reference contract also registered a fall during the first half of November, from €25.30/t on Friday, November 1 until €23.40/t on Monday, November 18. After this fall, they showed upwards and ended the month with values close to those recorded in the first days of November. This change in trend was related to the increase in the production of electricity with coal due to lower temperatures and problems in French nuclear power plants. 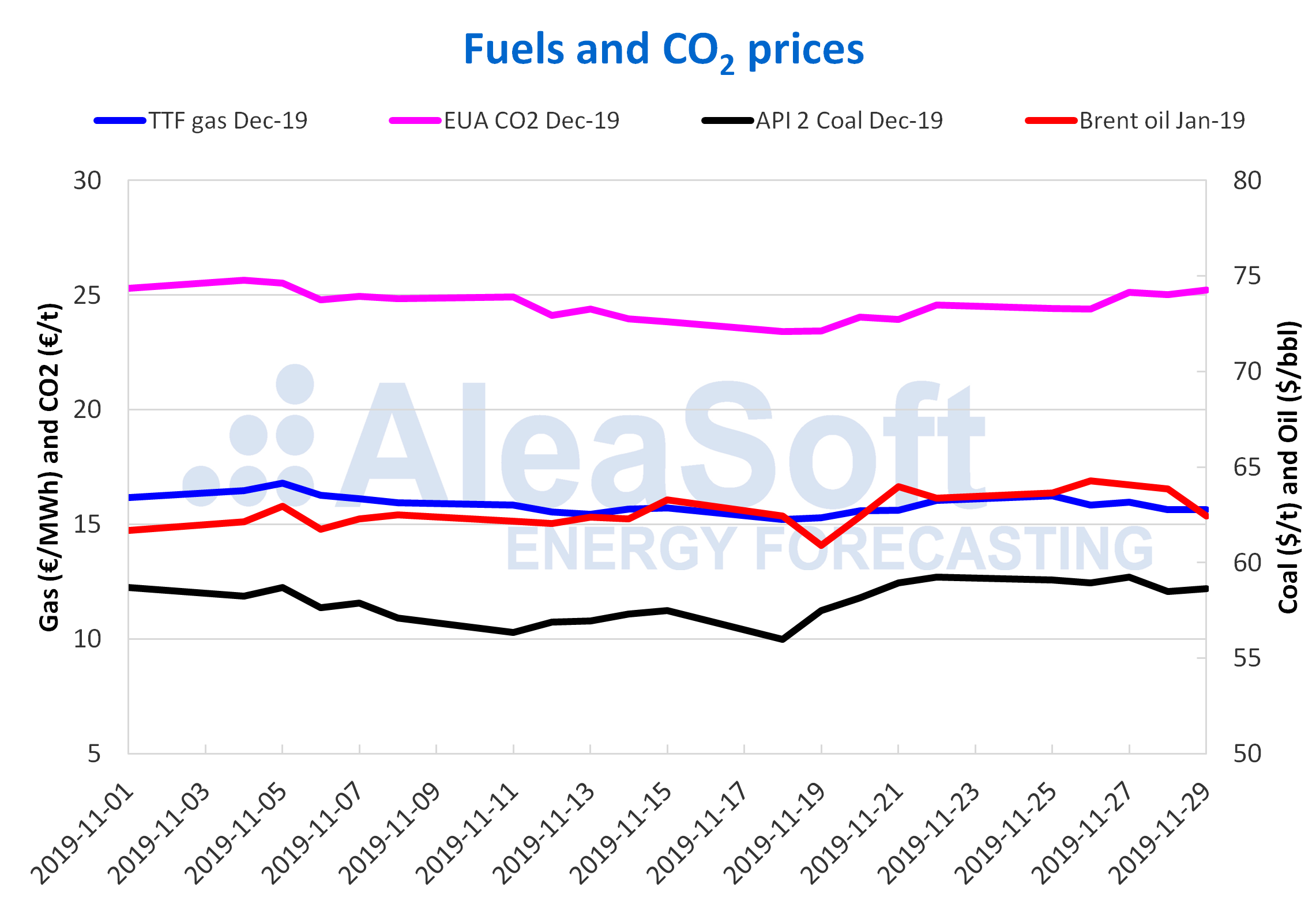