AleaSoft, December 17, 2018. AleaSoft analyses the behaviour of the Italian electricity market IPEX during 2018 and the influence of the price of fuels and CO2. Italy, which currently covers a large part of its demand with thermal production, and which has a high solar resource, has great potential for the development of photovoltaic production.

The PUN price of the Italian electricity market IPEX has risen until November of this year 8.01 €/MWh compared to the average of the first eleven months of 2017. According to the analysis carried out by AleaSoft, this price increase has been caused by the increase of the fuels price and CO2 emission rights price, which particularly affects Italy where a high percentage of the demand is covered by thermal production. In the first eleven months of 2018, the Italian market has positioned itself as the second highest price among the main European electricity markets behind the British N2EX market. 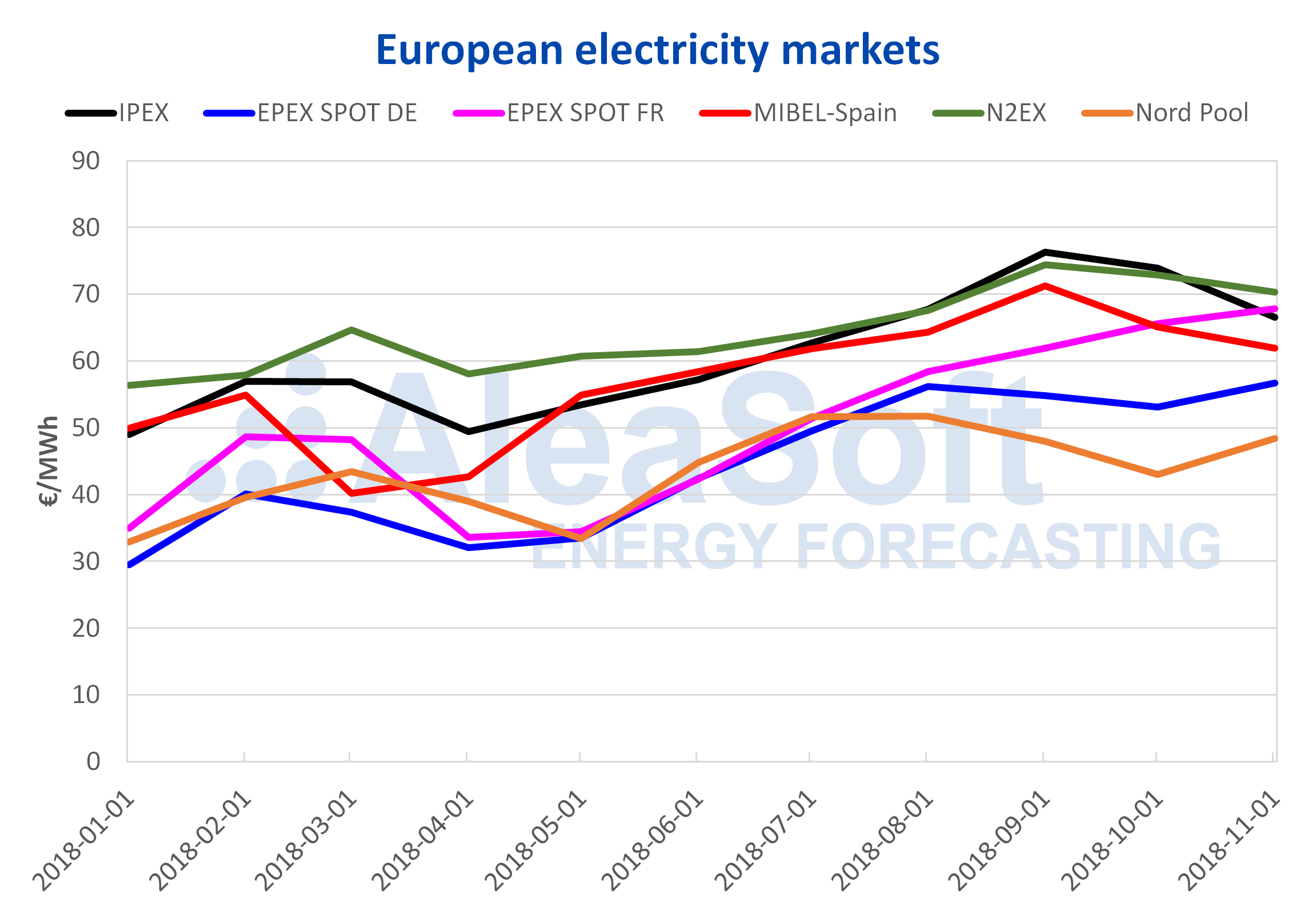 In the IPEX market, year-on-year increases have been recorded in all months of this year, except in January, due to the fact that in January 2017 the Italian market was affected by the French nuclear shutdowns. The average PUN price of each month of 2018, except for January, has been higher than the average price of the last five years for the corresponding month. 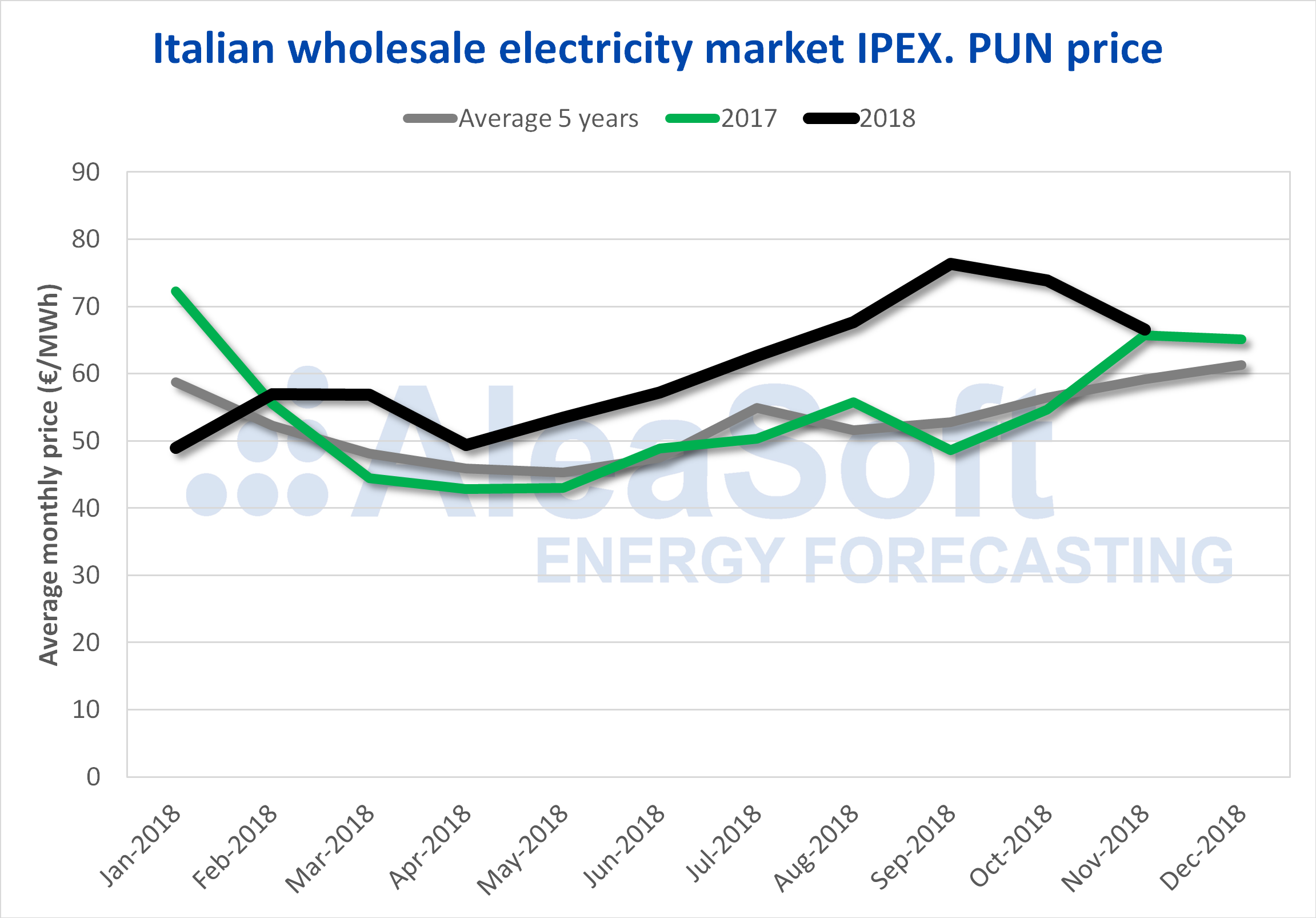 Sources: Prepared by AleaSoft with data from IPEX.

In 2018 the geographical area with the highest price was Sicily. 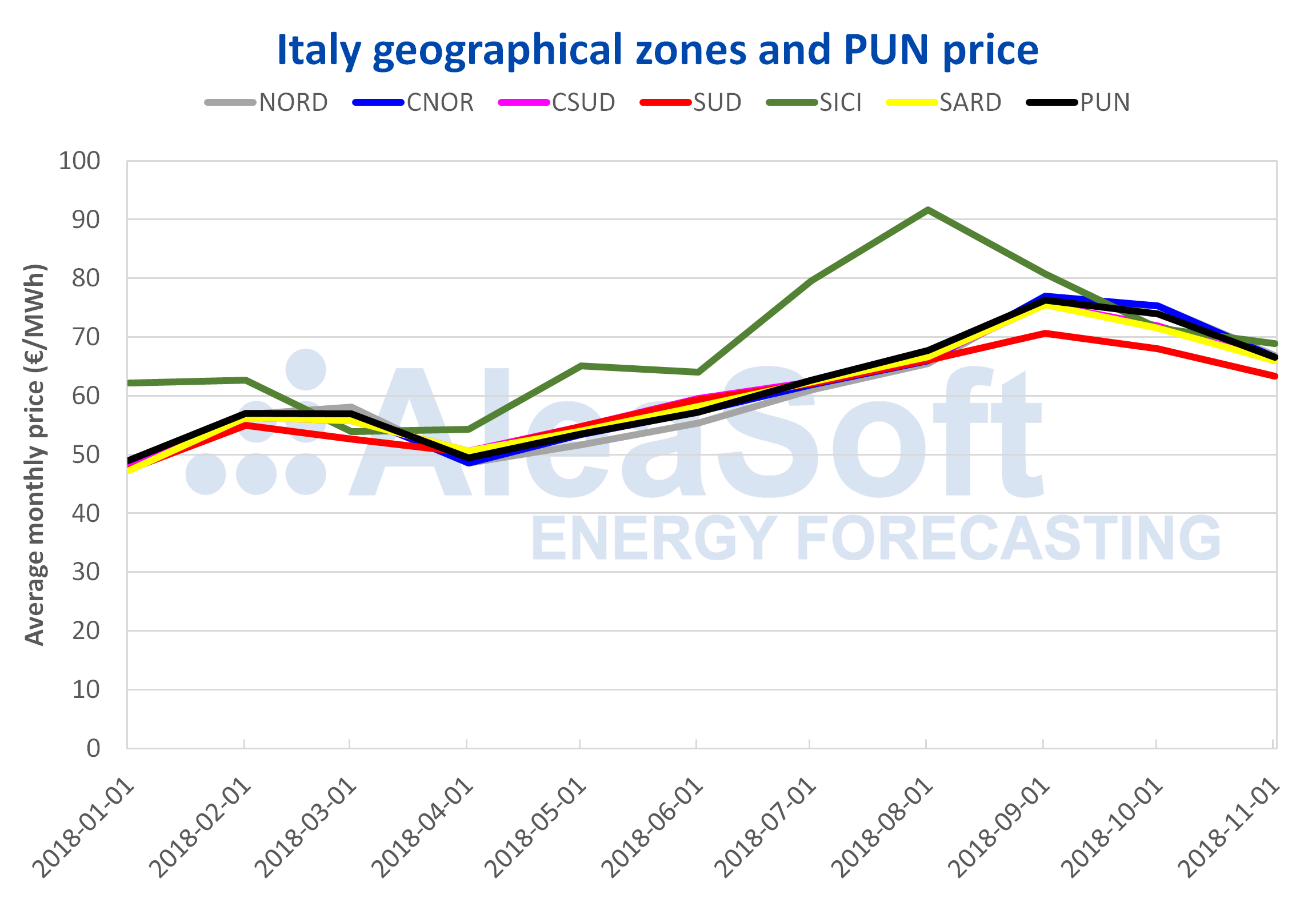 Sources: Prepared by AleaSoft with data from IPEX.

As analysed by AleaSoft, although thermal production in 2018 has decreased by 5.5% compared to 2017 if the first eleven months of the year are analyzed, in this period 55.9% of demand was covered with this type of technology. During the first eleven months of the year the production of electricity using gas was the highest, covering 24.5% of the demand, followed by production with other thermal technologies, with a 20.4% share, while the production with coal occupies the fourth place with a 9.3% share.

On the other hand, production with renewable technologies has increased by 13.4% up to November 2018 compared to the same period of 2017. This increase is mainly due to the fact that hydroelectric production increased by 34.4% during this period, standing as the third largest production technology in Italy during the first eleven months of the year. In the analysed period, wind energy increased 1.1% and solar energy decreased 9.3% with respect to the same period of 2017. 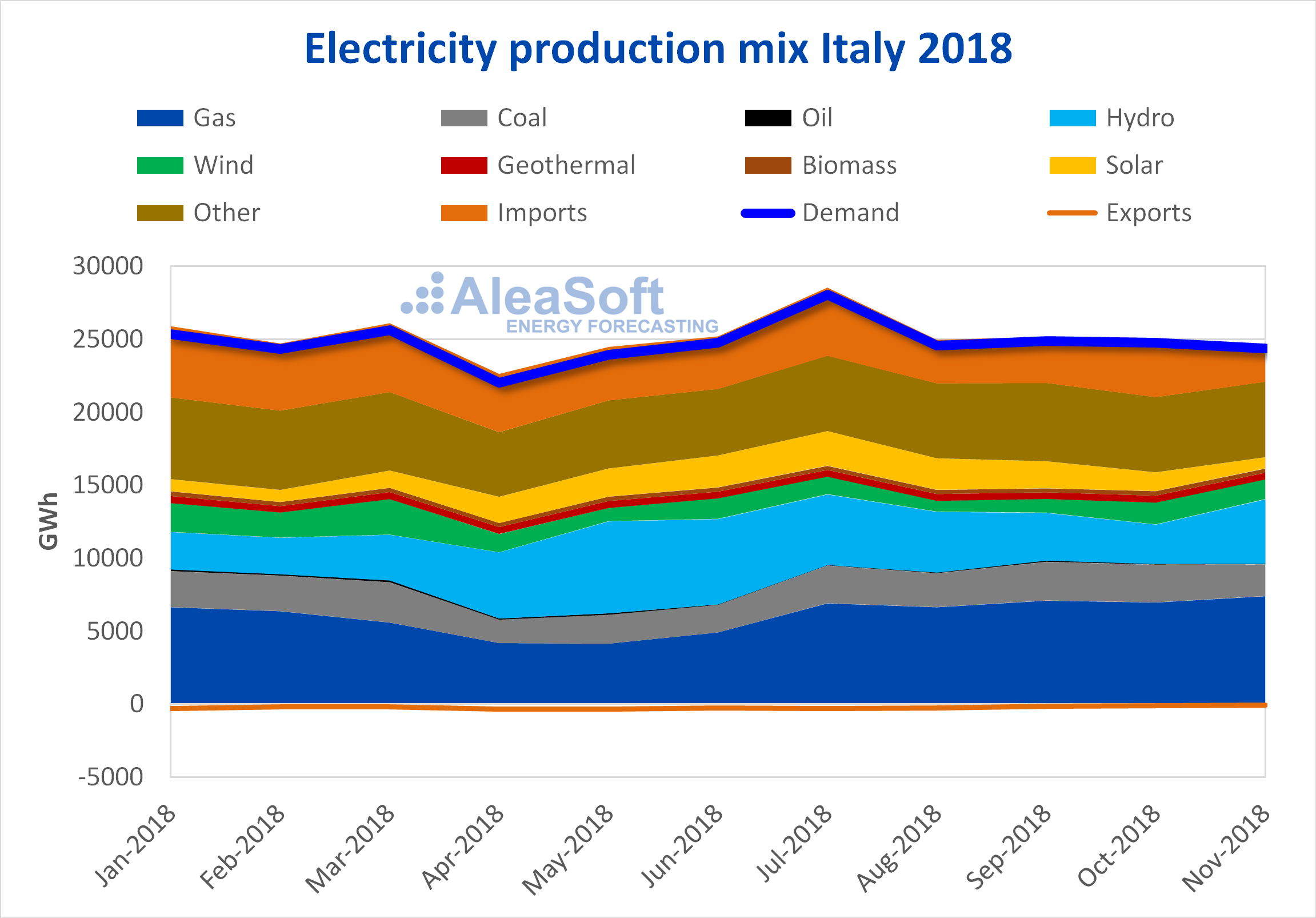 Sources: Prepared by AleaSoft with data from TERNA and ENTSOE.

The fact that Italy’s demand is covered in a high percentage with thermal production means that the price of the Italian electricity market is heavily influenced by the price of fuel and the CO2 emission rights and this year there has been a generalized increase in them. If one compares the average price of fuel and CO2 emission rights in the first eleven months of 2018, with the average price of 2017 the following data is obtained: Brent has risen 18.06 $/bbl, gas, 5.35 €/MWh, coal, 8.95 $/t and CO2, 9.45 €/t. 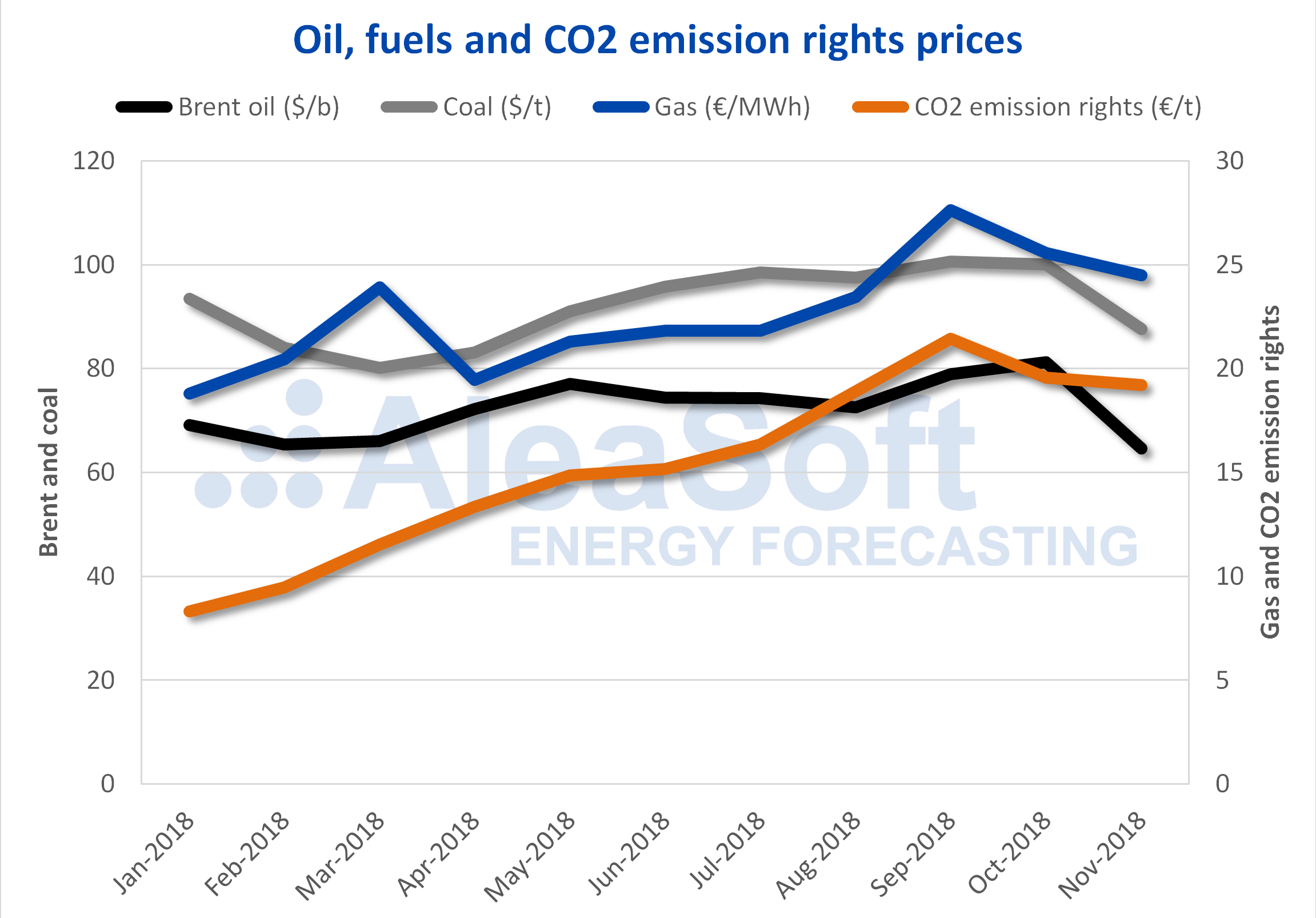 Sources: Prepared by AleaSoft with data from EEX, ICE, EIA and PEGAS.

Italy is a net importer of electricity from other countries. In the first eleven months of 2018, the balance of international exchanges represented 14.8% of the electricity demand, according to the data analysed by AleaSoft. 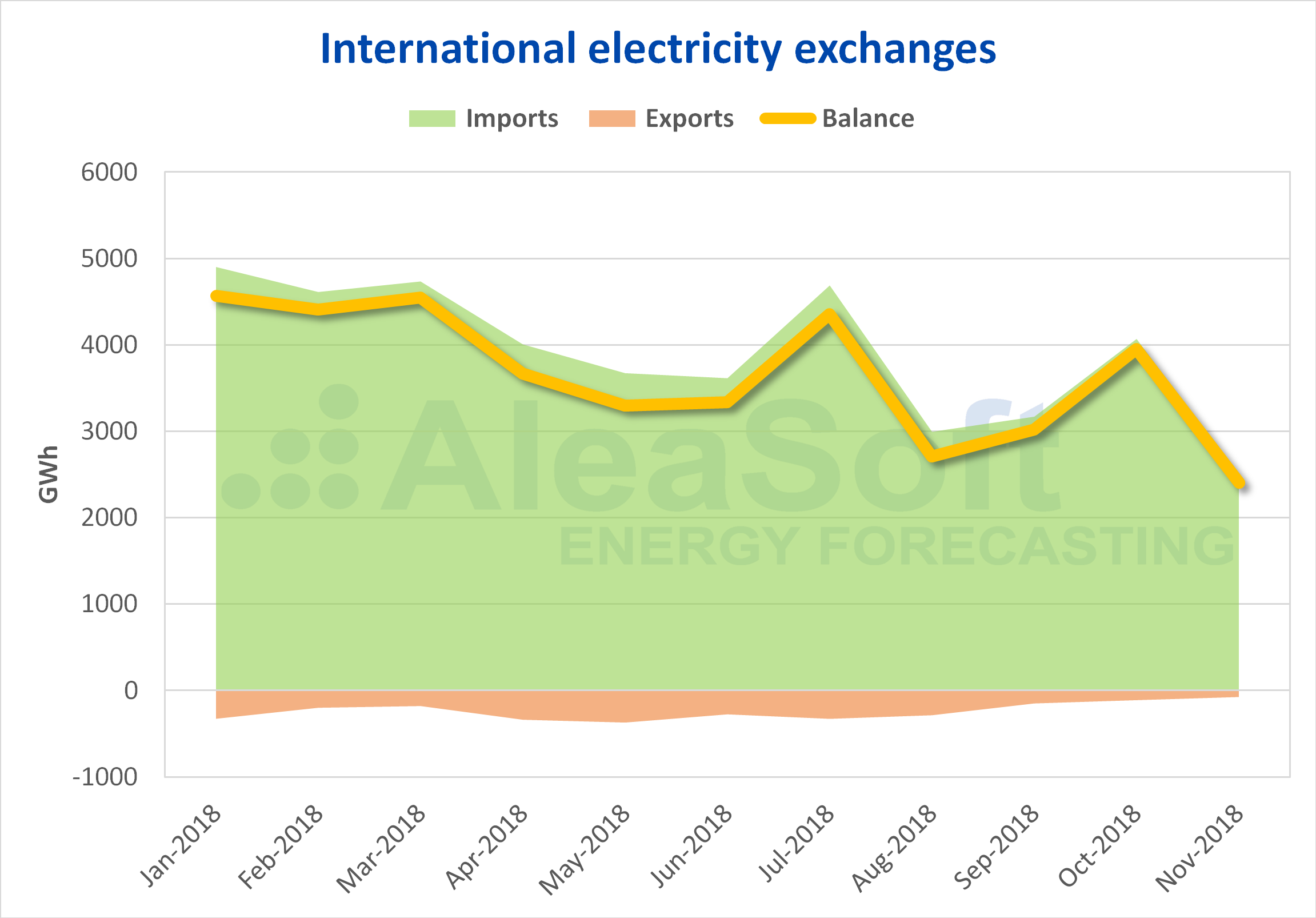 Sources: Prepared by AleaSoft with data from TERNA and ENTSOE.

Italy’s electricity system is divided into zones. A zone is a part of the electricity network where physical limits exist for the transfers of electricity to/from other geographical areas for reasons of system security. The zones are classified into geographical zones, national virtual zones and foreign virtual zones. The geographical zones represent a part of the national network; there are currently six active zones: Northern Italy (NORD), Central-Northern Italy (CNOR), Central-Southern Italy (CSUD), Southern Italy (SUD), Sicily (SICI) and Sardinia (SARD). National virtual zones represent a set of generating units connected to a part of the transmission network, whose maximum exportable generation to the rest of the grid is less than the maximum possible generation due to insufficient transmission capacity; currently there are the following: Brindisi (BRNN), Foggia (FOGN), Monfalcone (MFTV), Priolo G. (PRGP) and Rossano (ROSN). Foreign virtual zones: are the points of interconnection with neighbouring foreign countries; they include Austria, Slovenia, Corsica, France, Greece, Switzerland and Malta.

The market zones are built by the aggregation of geographical and/or virtual zones, so that the flows between them are lower than the limits of transmission notified by Terna. This aggregation is defined per hour as a result of the resolution of the daily and intra-day markets.

In the daily market the trading of purchase and sale offers for each hour of the following day is carried out.

The daily market MGP is a marginal market in which the price and volume of each hour are established from the point of equilibrium between supply and demand. All matched sales offers and matched purchase offers related to pumping units and consumer units that belong to foreign virtual zones are valued at the marginal price of the area to which they belong. Matched purchase offers referring to units of consumption belonging to Italian geographical areas are valued at the single national price PUN (Prezzo Unico Nazionale). The PUN price is equal to the average of the prices of the zones, weighted by the quantities purchased in these zones.

Italy will begin to participate in the European XBID intra-day market from the second start-up of it, which is scheduled for 2019, in spring or early summer.

Guarantees of Origin are negotiable certificates that can be sold or bought in the market of Guarantees of Origin M-GO, organized and managed by GME, or through bilateral contracts. M-GO market sessions are normally held monthly, and use the continuous market mechanism. On the other hand, GSE organizes periodic auctions of guarantees, at least quarterly.

Potential of solar production in Italy

The fact that Italy has so much thermal production and that it does not have nuclear production implies that the challenge of reducing CO2 emissions will be greater.

In Italy the solar resource is high. It is estimated that in the southern part of the country there are more than 2000 hours of sunshine per year. According to data published by ENTSOE (European Network of Transmission System Operators for Electricity), solar power installed in Italy in 2018 is 4.7 GW, and according to the TYNDP (Ten-Year Network Development Plan), also of ENTSOE, in 2040 solar power can be higher than 58 GW, and even 117 GW according to the most optimistic scenarios. According to AleaSoft, an increase in solar installed power in Italy can bring the price of the IPEX market closer to that of other European countries. 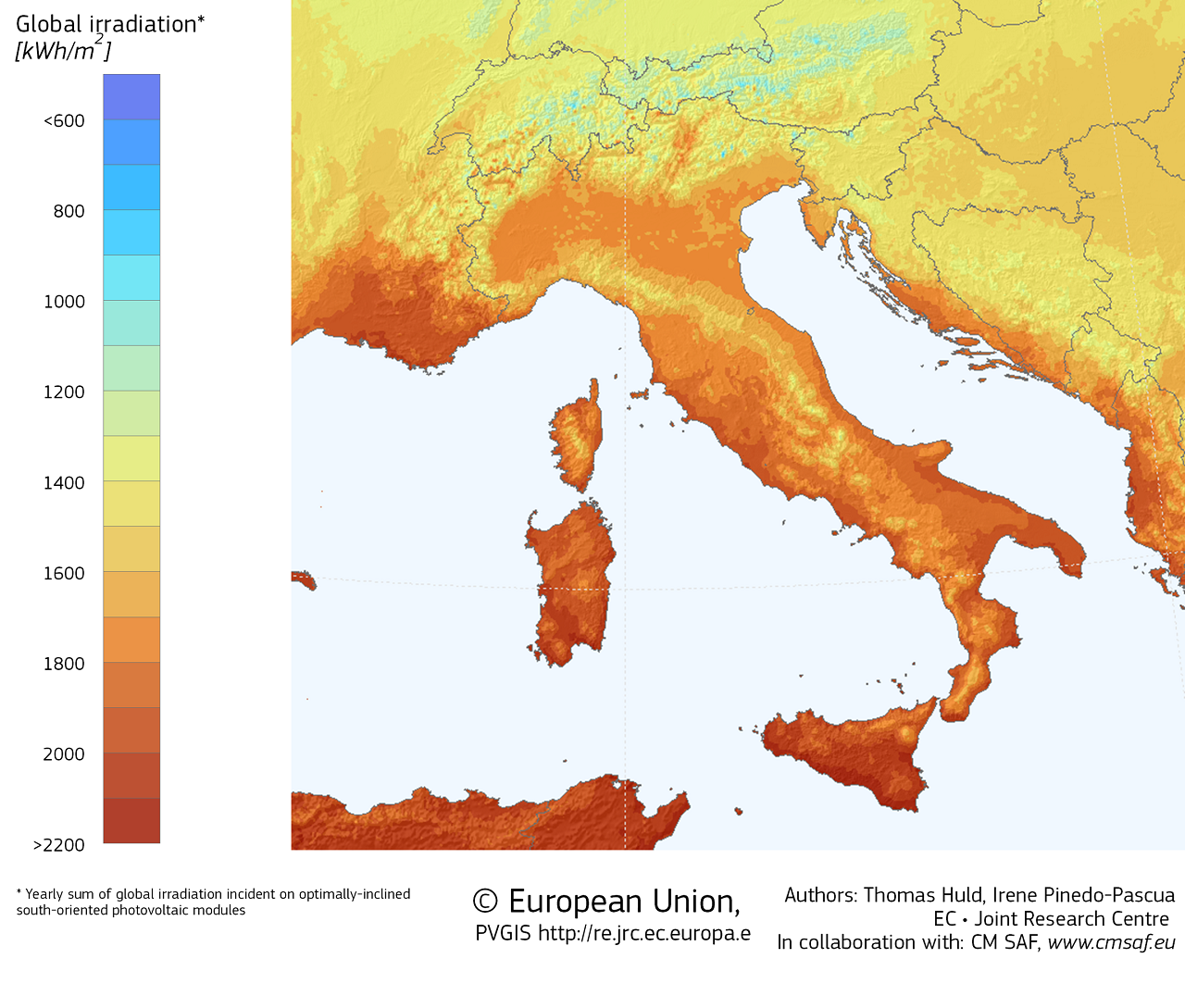