AleaSoft, December 20, 2018. For the Christmas week, AleaSoft forecasts indicate a fall of the main European electricity markets prices. The decrease in demand during the holiday period will be the main cause, and in most of the continent, with the exception of the Iberian Peninsula, milder temperatures and an increase in wind production are expected.

AleaSoft forecasts of weather indexes for the main European electricity markets show one last week of the year with temperatures slightly upwards and above the usual values for this time of year. The exception will be the Iberian Peninsula, which during that week is expected to register a slight drop in temperatures. The most daring forecasts suggest that this mild weather could lengthen until 2019, and that it could be the general trend on average throughout the winter. If the phenomenon of El Niño appears again this year, as everything seems to indicate, we could have a particularly rainy winter as well as slightly warmer than usual. According to AleaSoft, if these mid-term forecasts were met, they would favour a winter without high price peaks and a spring with low prices thanks to the increase in hydroelectric reserves. 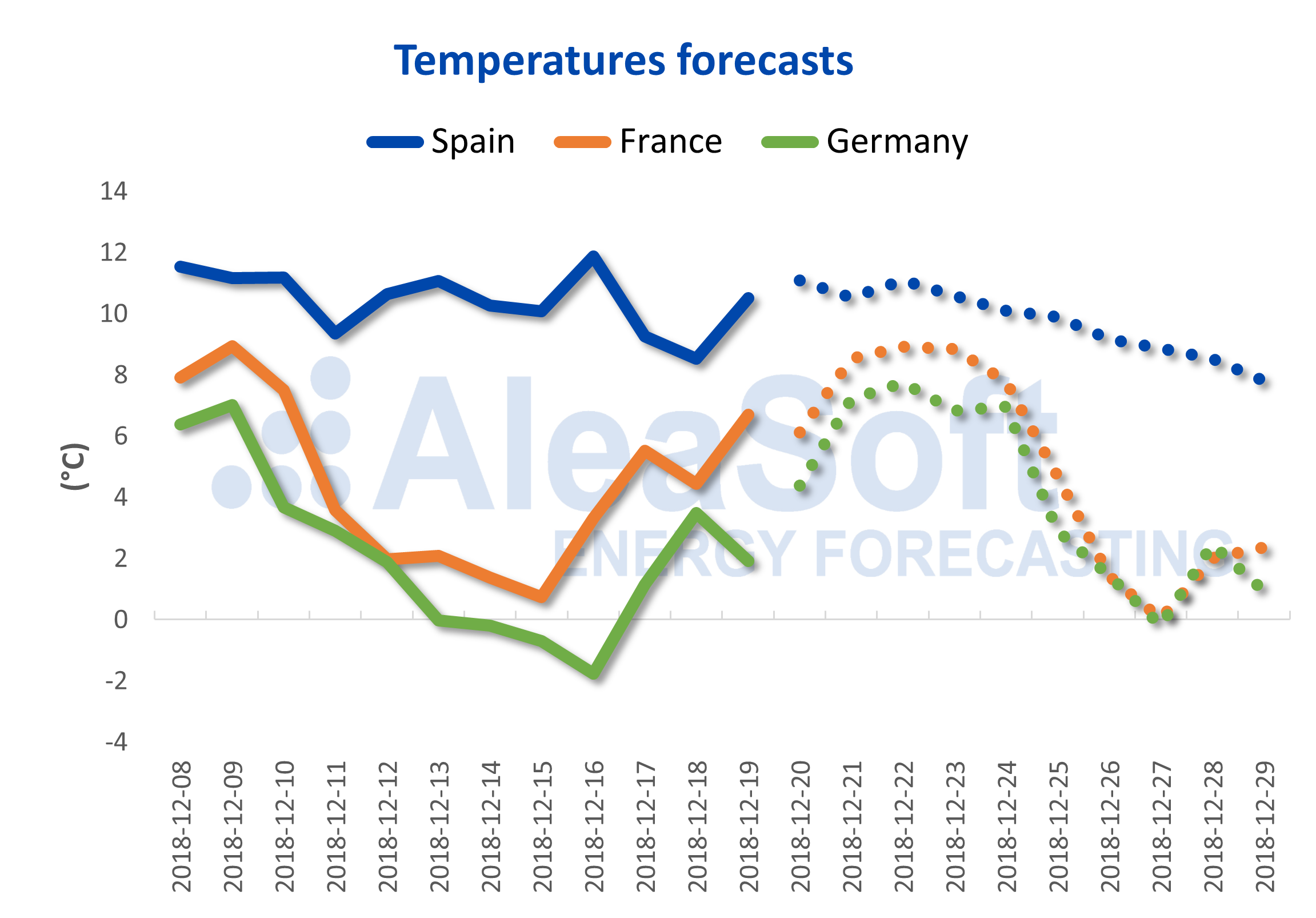 In the last seven days, the prices of the main European electricity markets have been grouped in the range of 60-70 €/MWh due to a general drop in wind production in the continent. Once again, the exception was the MIBEL market in Spain and Portugal, where wind production was relatively high and from Thursday 13 to Saturday 15 it was the market with the lowest price, without taking into account the Nord Pool market that, even rising more than 6 €/MWh compared to the previous week, continued with a lower price than MIBEL in those days.

Since Wednesday 18, the markets have grouped around 60 €/MWh, except for the Italian IPEX and the British N2EX, traditionally more expensive, which are at 70 €/MWh.

For the last week of 2018, prices are expected to fall, according to AleaSoft. In most of the continent, temperatures will soften to levels above those usual for this time of year and will help to reduce the demand for electricity already lower during the Christmas holiday period. Also the wind production is expected to increase in the coming days in important markets such as France and Germany, which will push the downward trend in prices. In the Iberian market MIBEL is also expected a decline in the price due to the decrease in demand, according to the forecasts of AleaSoft, although in this case the decrease in wind production and temperatures will not help. 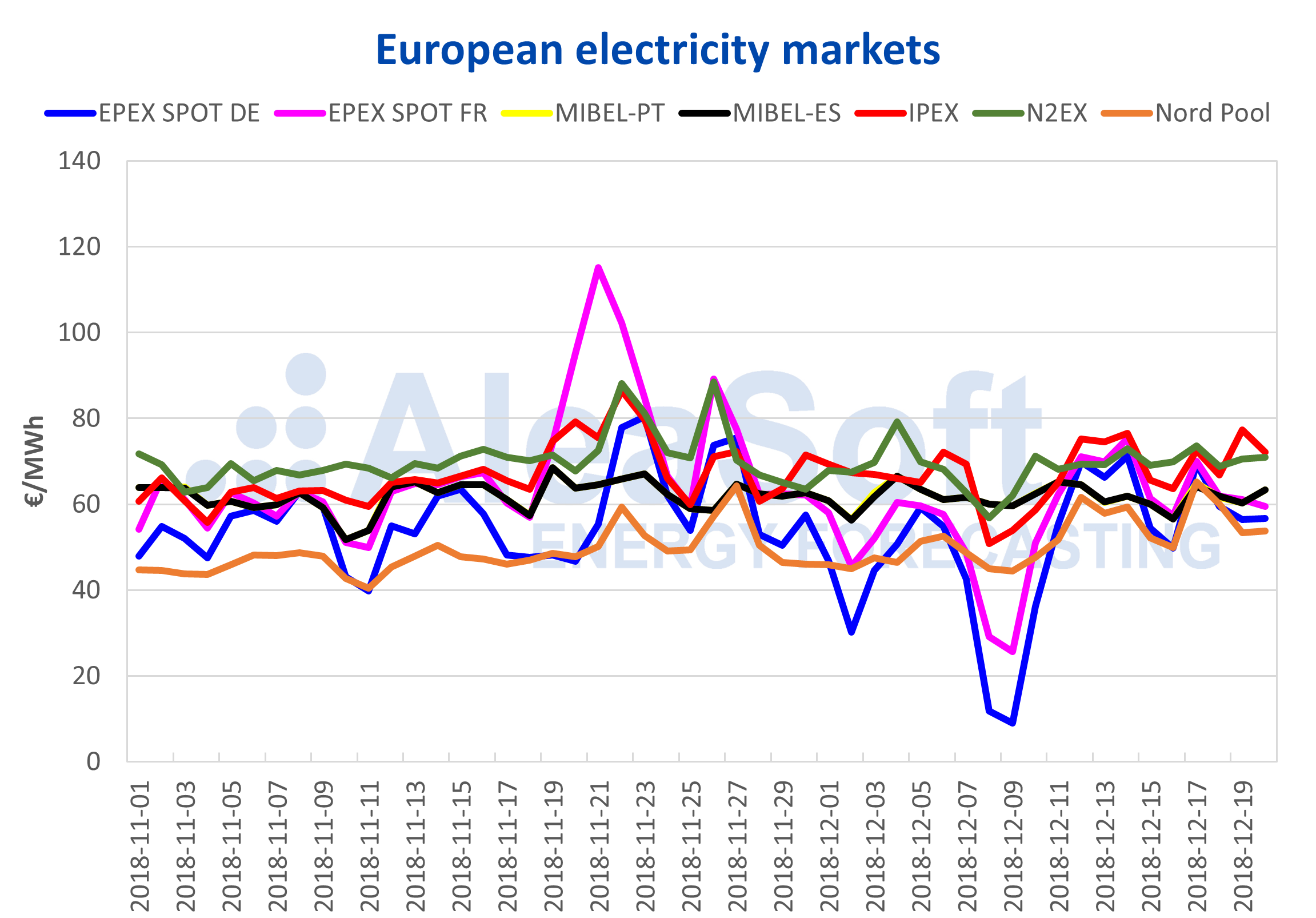 The price of a barrel of Brent oil fell more than $4 (6.7%) since last Friday, December 14, before the slowdown in demand and doubts about the commitments to reduce production in the main exporting countries. Such a low price ($56.26 per barrel on Tuesday 18) had not been registered for more than a year, and already accumulates a fall of 33.0% from the maximum price reached in October. 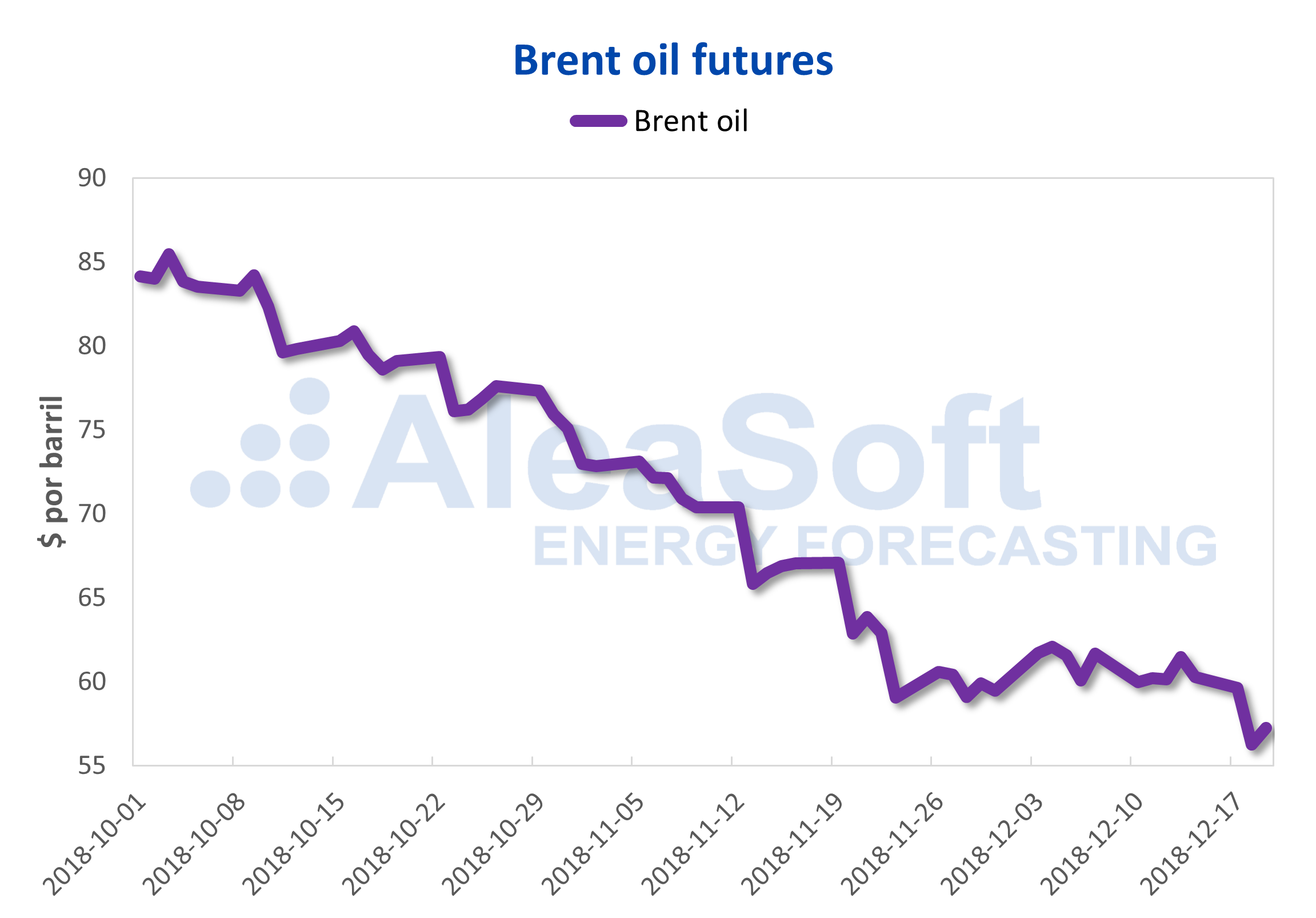 The contract of futures of CO2 emission rights for December 2018 has expired and was negotiated for the last time on Monday, December 17, at 24.26 €/t. From now on, the reference price is the future price for December 2019, which was settled on Wednesday 19 at 24.62 €/t, after increasing more than 4 €/t (20.2%) since the beginning of the previous week. Auctions of emission rights now enter a three-week break for the holiday period. The next auctions, which will be resumed on January 7, will already be subject to the reserve system for market stability (MSR) that will reduce by almost half the rights available in the secondary markets. If we add to this that it is not yet clear when the auctions will resume in Germany in 2019, and the uncertainty of whether or not an agreement is reached with the United Kingdom on rights trading after Brexit, according to AleaSoft, the year 2019 can start with significant increases in the price of CO2. For now, the European Commission has decided to prevent the commercialisation of emission rights issued by the United Kingdom from January 1 until an agreement is reached.

The price of TTF gas fell slightly on Tuesday 18 due to the forecast of mild temperatures until the entrance of 2019 and also influenced by the fall of Brent, although the high price of CO2 emission rights supports it.

The price of the future of European coal API2 broke the upward trend of the last three weeks and yesterday back 1.40 $/t with respect to the session on Monday 17 due to the forecast of low demand against the forecasts of relatively mild temperatures for the next weeks and enough reserves. This drop in the price has also been favoured by the fall in the Brent price and by the little activity in the markets as the holiday period approaches.

Electricity futures in the main European markets are holding high this week after the increases experienced last week caused by the rise in gas, coal and CO2 futures.

The last seven days the Iberian market has been characterized by a relatively high wind production, contrary to what happened in the centre of the continent. Yesterday, Wednesday 19, there was a stop at the Vandellós nuclear power plant, which is scheduled to reconnect as of Saturday, December 29. This stop is added to the one of Ascó I, that is disconnected from November 10 and that would have to start again this Saturday 22. 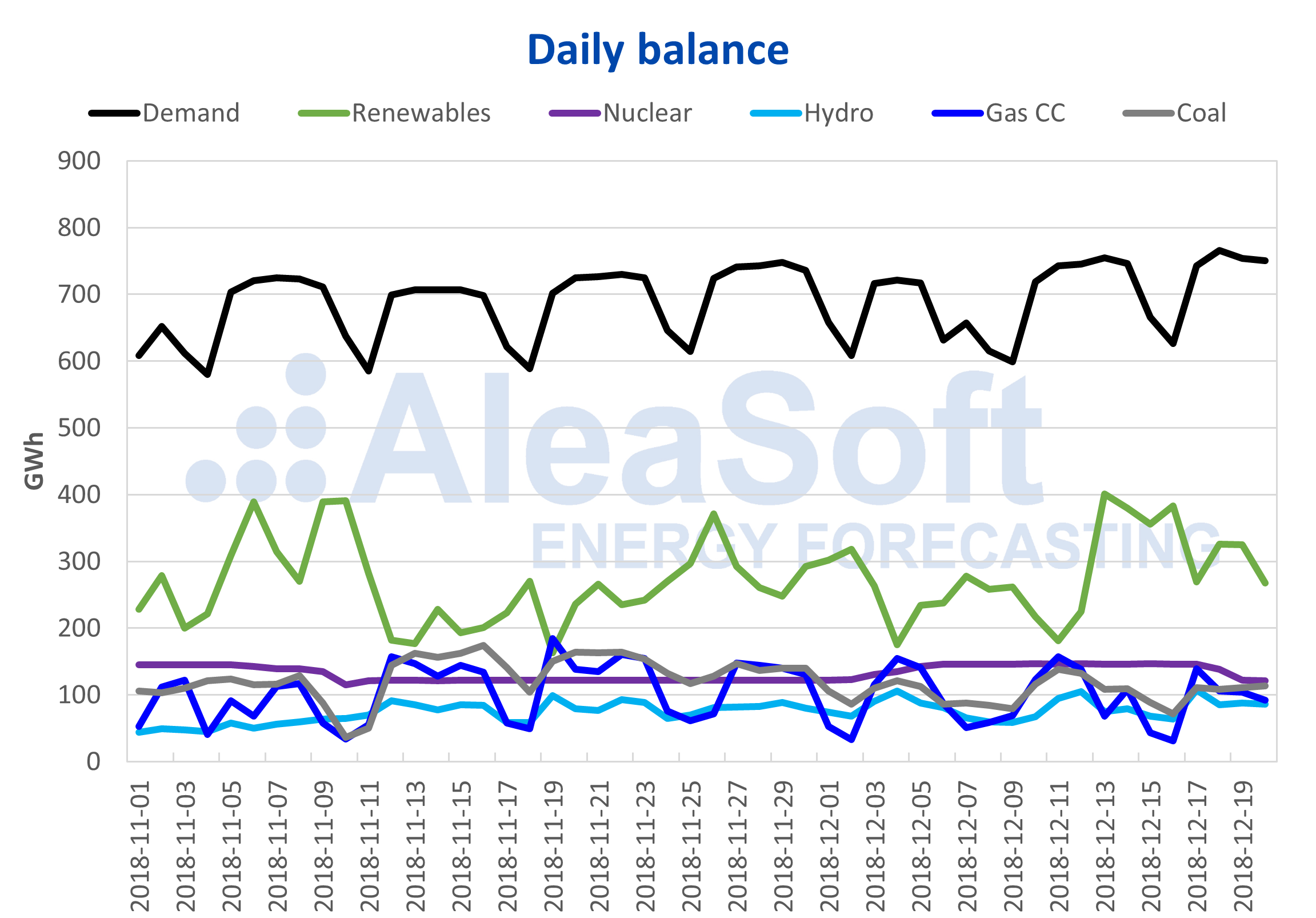 For the last week of the year, a fall in demand is expected due to national and regional holidays, and for the holiday period. According to AleaSoft forecasts, this drop in demand will be the main factor that will bring down the price of the electricity market, despite the forecast of decline in wind and nuclear production.