AleaSoft, November 19, 2019. In the Netherlands, the electricity production is based mostly on gas. However, in recent years the renewable energy production has increased rapidly, while the coal energy production has been reduced. The wind energy stands out for its implementation, and it is trusted to replace in the future the production from coal and nuclear energy. 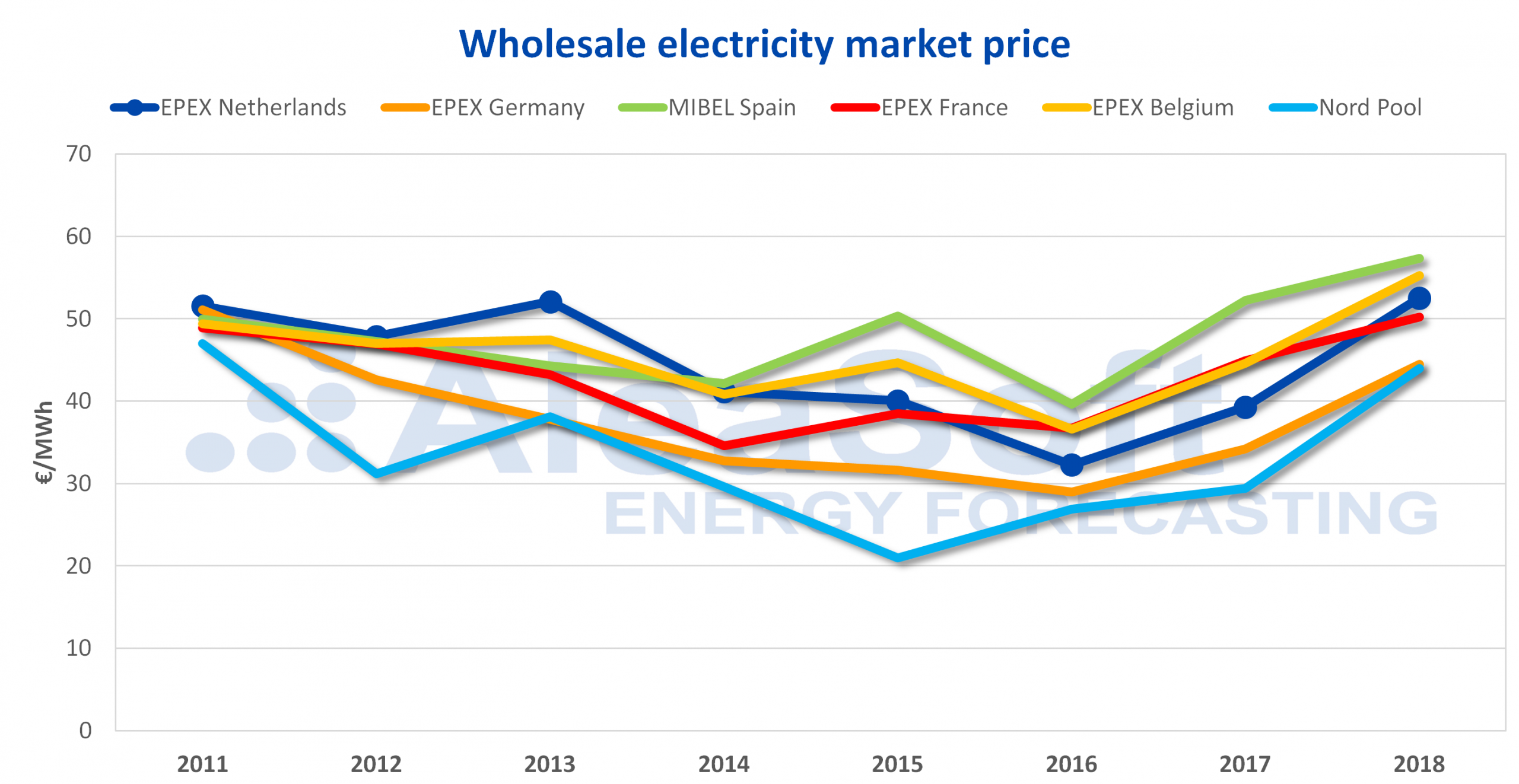 Most of the electricity produced in the Netherlands comes from the combined cycle gas turbines. The production with this technology increased since 2015. The wind energy also occupies an important place in terms of production and in 2018 it also increased compared to 2015. In terms of photovoltaic solar energy production, despite having less weight, it increased quickly to triple in recent years. In contrast, the production of coal‑fired power plants was declining. On the other hand, in the Netherlands production mix there are also contributions from biomass and nuclear energy. 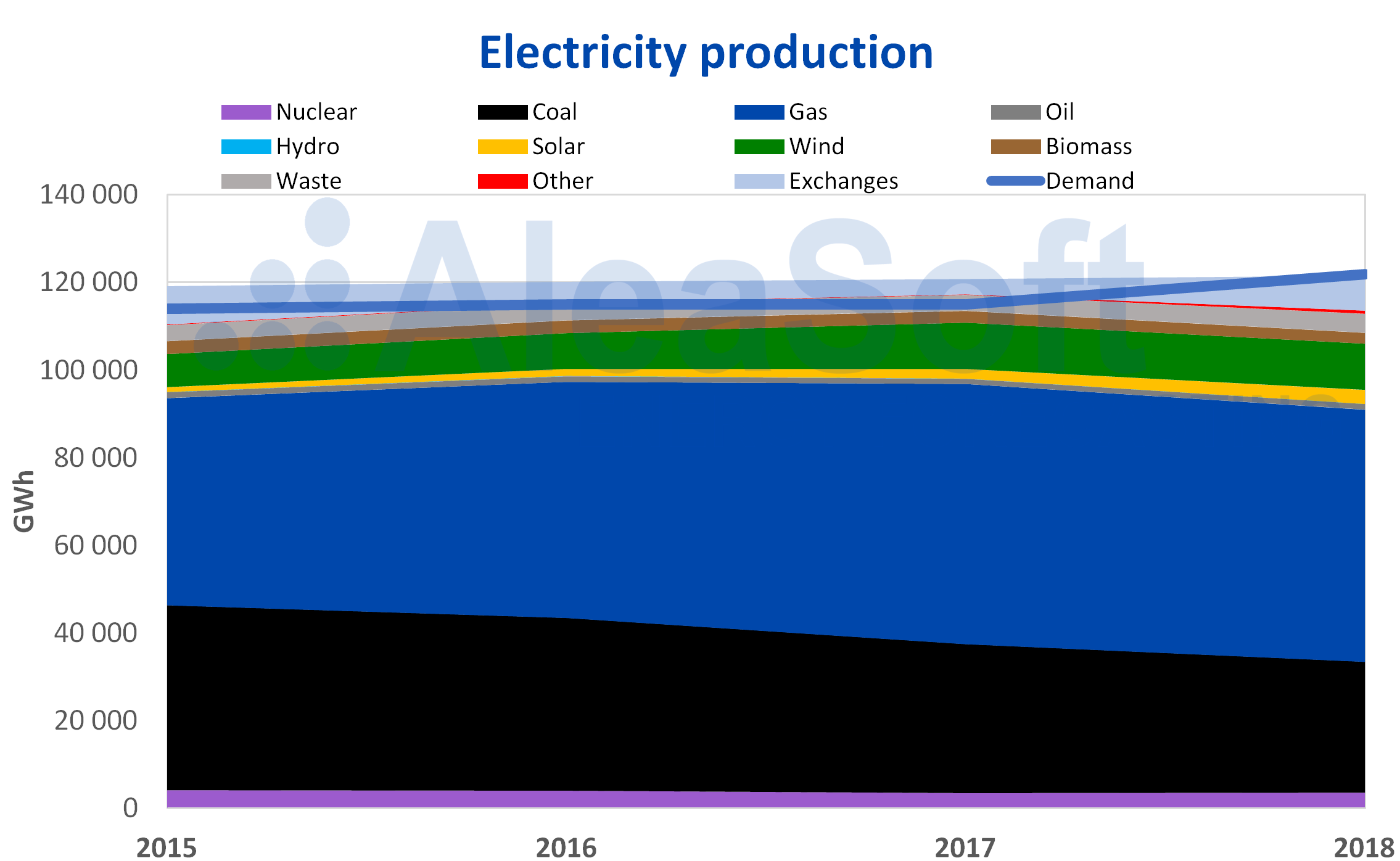 As regards the electricity demand of the Netherlands, it registered a slight upward trend in recent years. Since the current production in the Netherlands is insufficient to meet this demand, the country is forced to import electricity.

In 2018, the Netherlands imported 8223 GWh more electricity than they exported to other countries. Of the 26 818 GWh that were imported in total, 78% came from Germany. On the other hand, the Netherlands exported a total of 18 596 GWh during the year 2018. The country to which more electricity was exported was Belgium, with 58% of the total, followed by the United Kingdom, with 36%. This year there were also exchanges of electricity with Norway, but with smaller volumes. 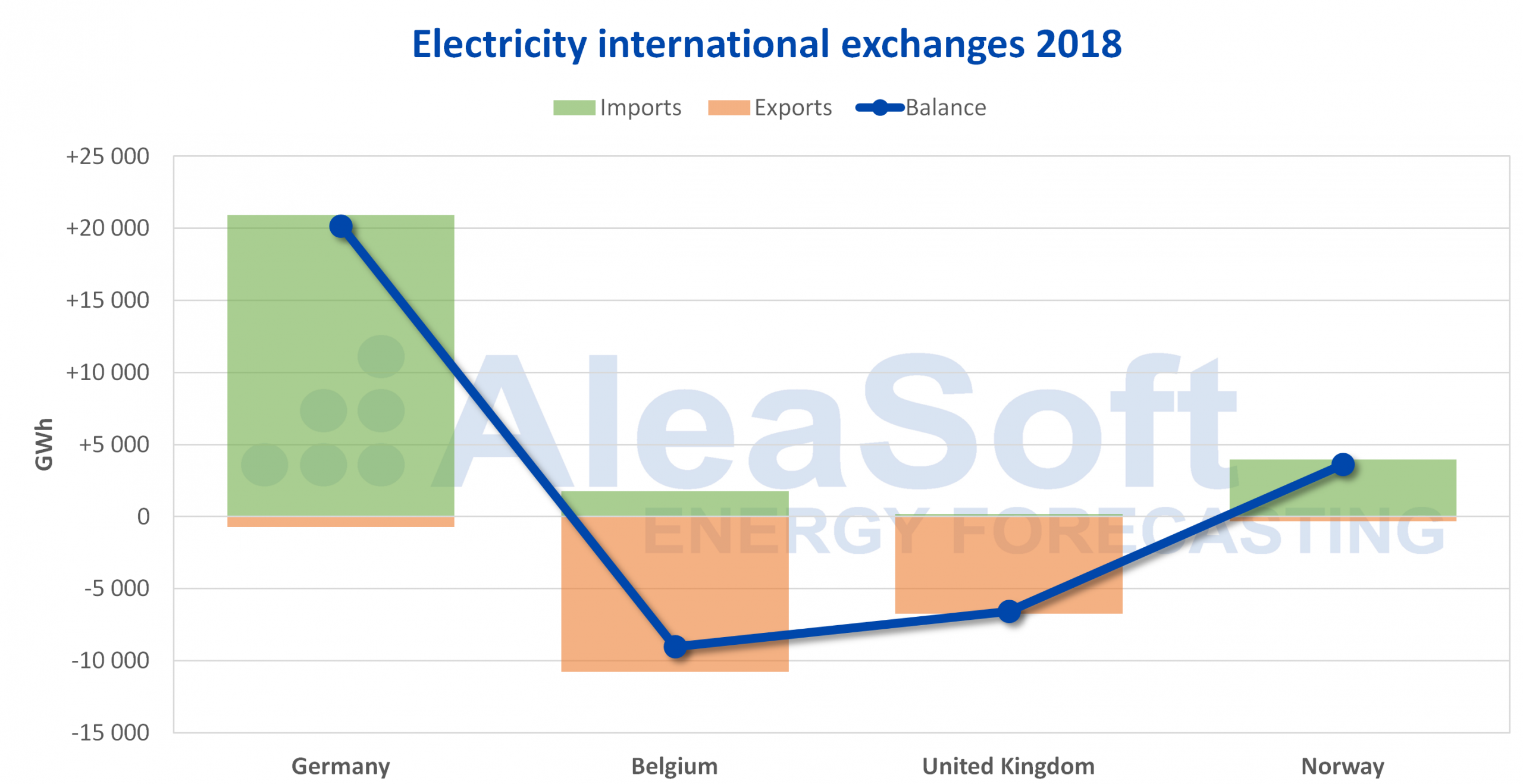 The most important contribution to the installed capacity in the Netherlands is that corresponding to the combined cycle gas turbines. Although since 2016, when it represented 62% of the total, its weight was decreasing, in 2019 it still represents 51% of the total capacity.

At the same time, the weight of the renewable energies such as photovoltaic energy and wind energy was increasing year after year. The largest contribution is that corresponding to the wind energy which, in 2019, has an installed capacity of 4626 MW, which represents a contribution similar to that of coal. For its part, the installed capacity of solar energy in 2015 represented only 3% of the total, but it was increasing to stand at 13% in 2019. In recent years, it almost quadrupled, from 1000 MW installed in 2015 to 3937 MW in 2019.

The total installed capacity in the Netherlands is completed with much smaller contributions of waste, biomass, hydroelectric and nuclear energy, which, in 2019, represent 2.5%, 1.6%, 0.1% and 1.6 % of the total capacity, respectively. 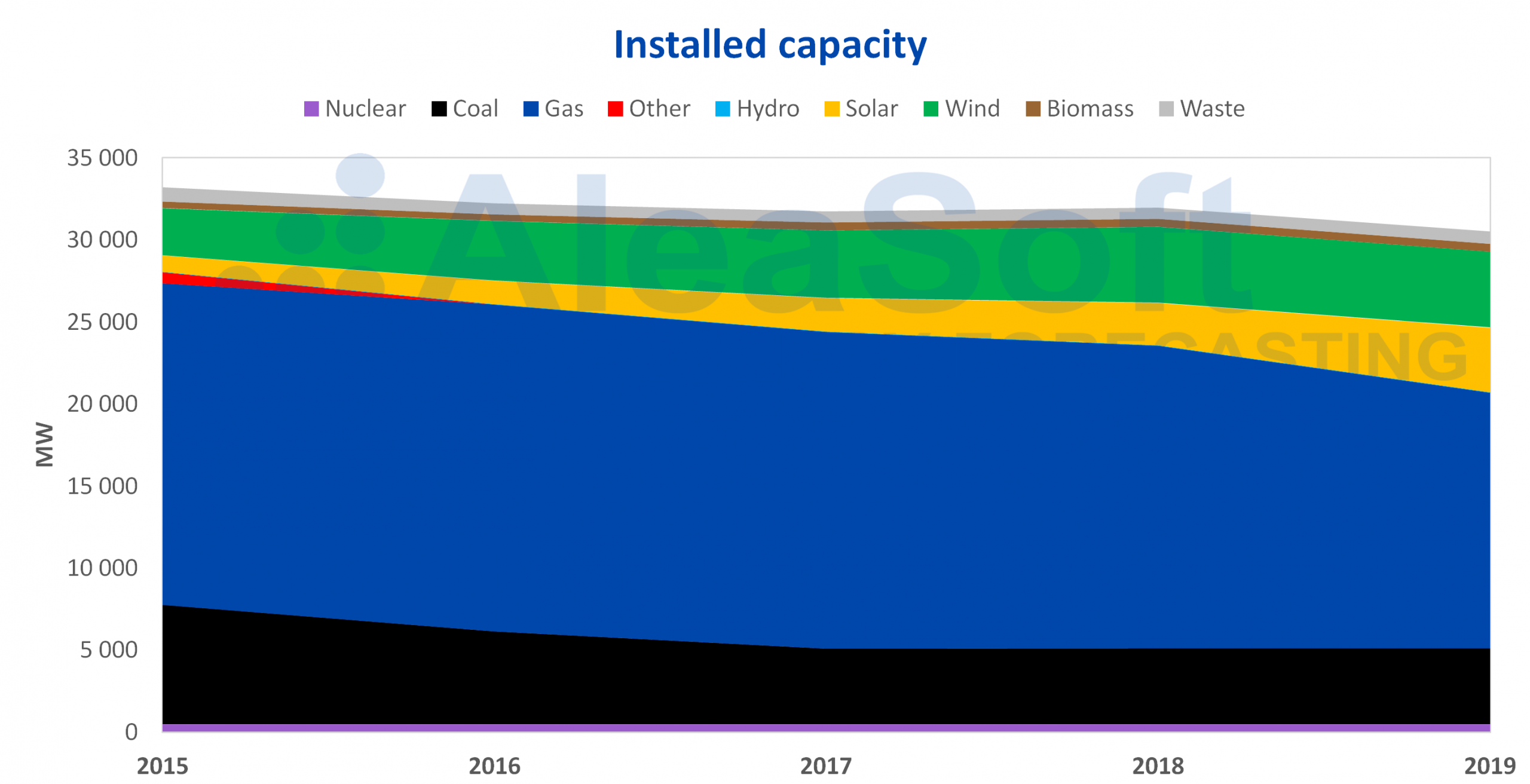 The future evolution of the electricity generation in the Netherlands

It is expected that by 2040 the contribution of the nuclear energy to the production mix of the Netherlands will have disappeared. In addition, to meet the objectives of reducing CO2 emissions established in the Paris Agreement, the coal energy production has been progressively decreasing with the objective of ending up completely dispensing with this technology.

On the other hand, in the coming years it is expected to increase the contribution of electricity produced by wind energy, mainly from the North Sea, to cover the country’s electricity demand. It is also expected that the photovoltaic energy production will continue with the current growth rate.

However, as long as the contribution of the renewable energies does not increase significantly, it is not possible to dispense with the gas energy production, since it currently provides more than a half of the electricity produced in the country. Without a doubt, a great challenge for this country.

PrevPreviousThe electricity markets continue to react with rises in prices to the low temperatures
NextAleaSoft participates in the National Congress of Renewable Energies of APPA: a vision of the future of the sectorNext
Menu
Facebook-f Twitter Linkedin