AleaSoft, November 18, 2019. Last week of November 11, the solar energy production of the European markets fell. In the case of the wind energy production there was a sharp increase in Germany and somewhat more moderate in Italy, but in the other markets it fell. The temperatures dropped widely causing the increase in electricity demand. In this context of greater demand and lower renewable energy production, the markets reacted with price increases, something that according to AleaSoft’s forecasts will happen again this week.

The solar energy production decreased last week in the European markets compared to the week of Monday, November 4. In Italy, the largest decrease, of 41%, was recorded. In Spain, where photovoltaic and solar thermal technologies are included, it decreased by 23%, while in the rest of the analysed markets the variation was between ‑2.6% in Portugal and ‑12% in Germany. At AleaSoft it is expected that during this week the solar energy production of Germany, Spain and Italy will recover. 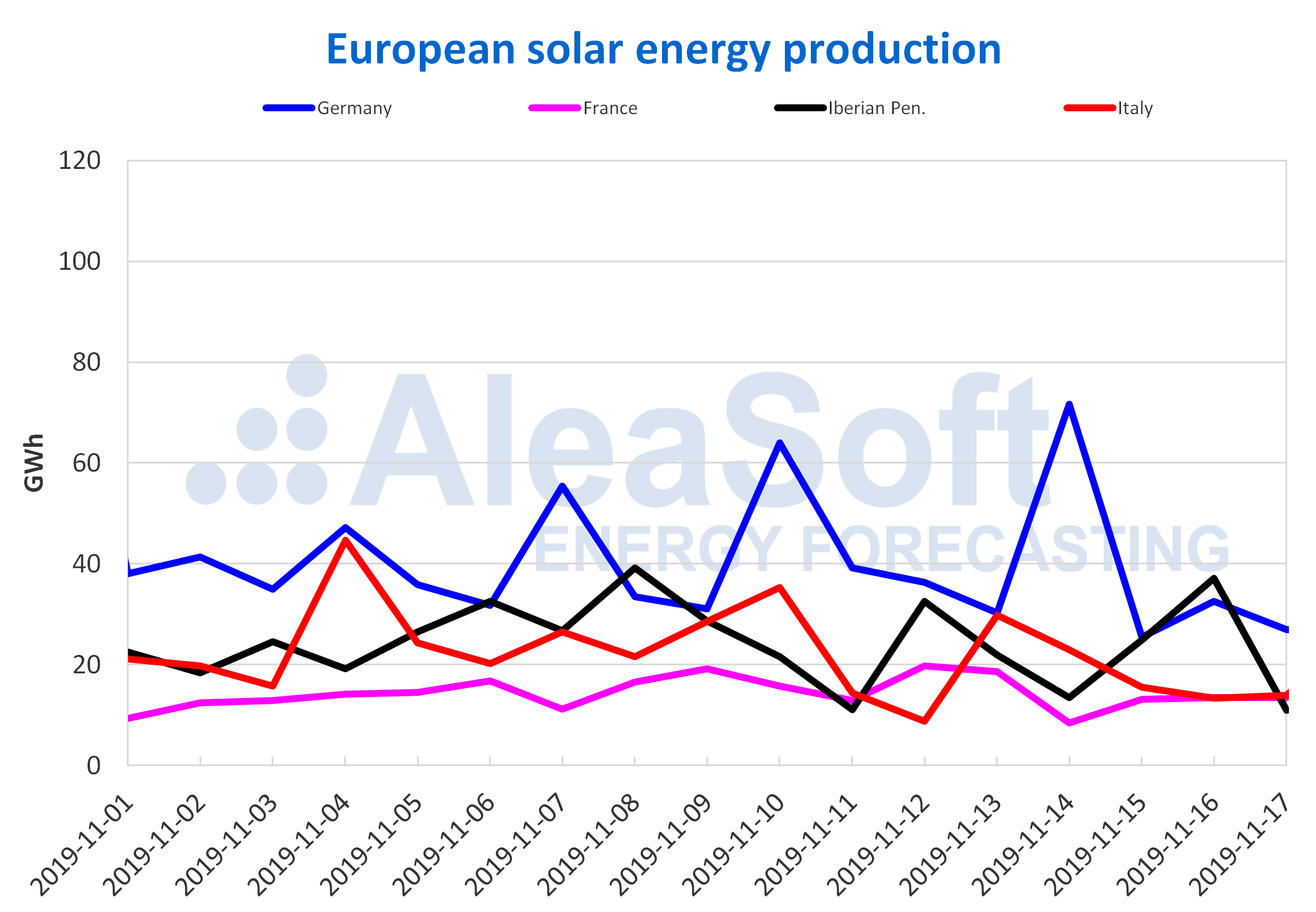 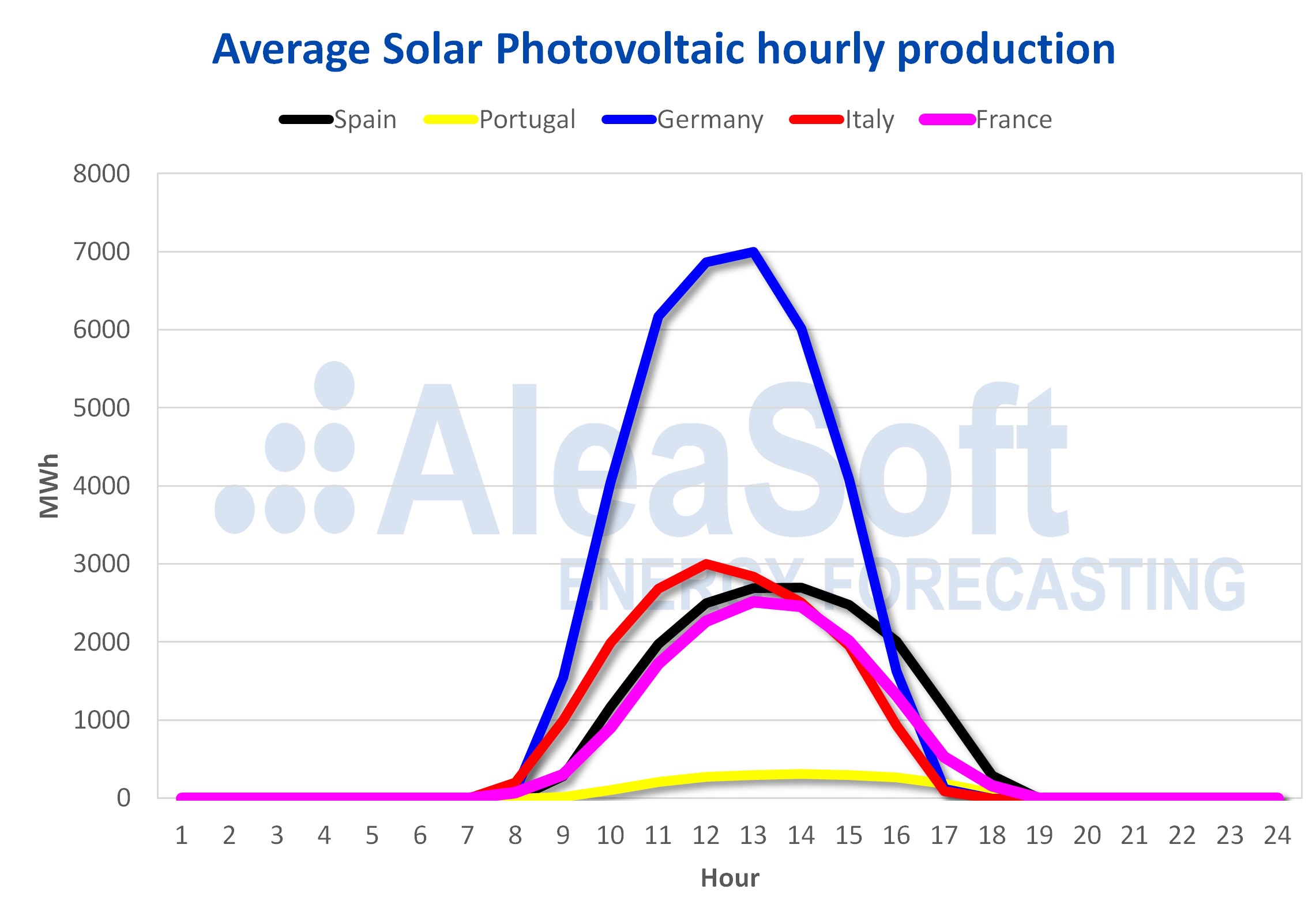 Last week ended with an increase in wind energy production in Germany of 87% over the previous week. In Italy, the production with this technology continued to increase and there was 6.9% more than the week of November 4. For the rest of the markets there was a decrease that reached up to 22% in Spain. For this week, at AleaSoft a generalised decrease is expected at European level.

In the first 17 days of November 2019, the wind energy production had significant year‑on‑year increases in several European markets. In this sense, the year‑on‑year increase in Italy stands out with 211% more production than in the same period of the previous year. In Spain and Portugal there were also significant increases of 75% and 44% respectively. In the rest of the analysed markets, the increases were between 10% and 18%. 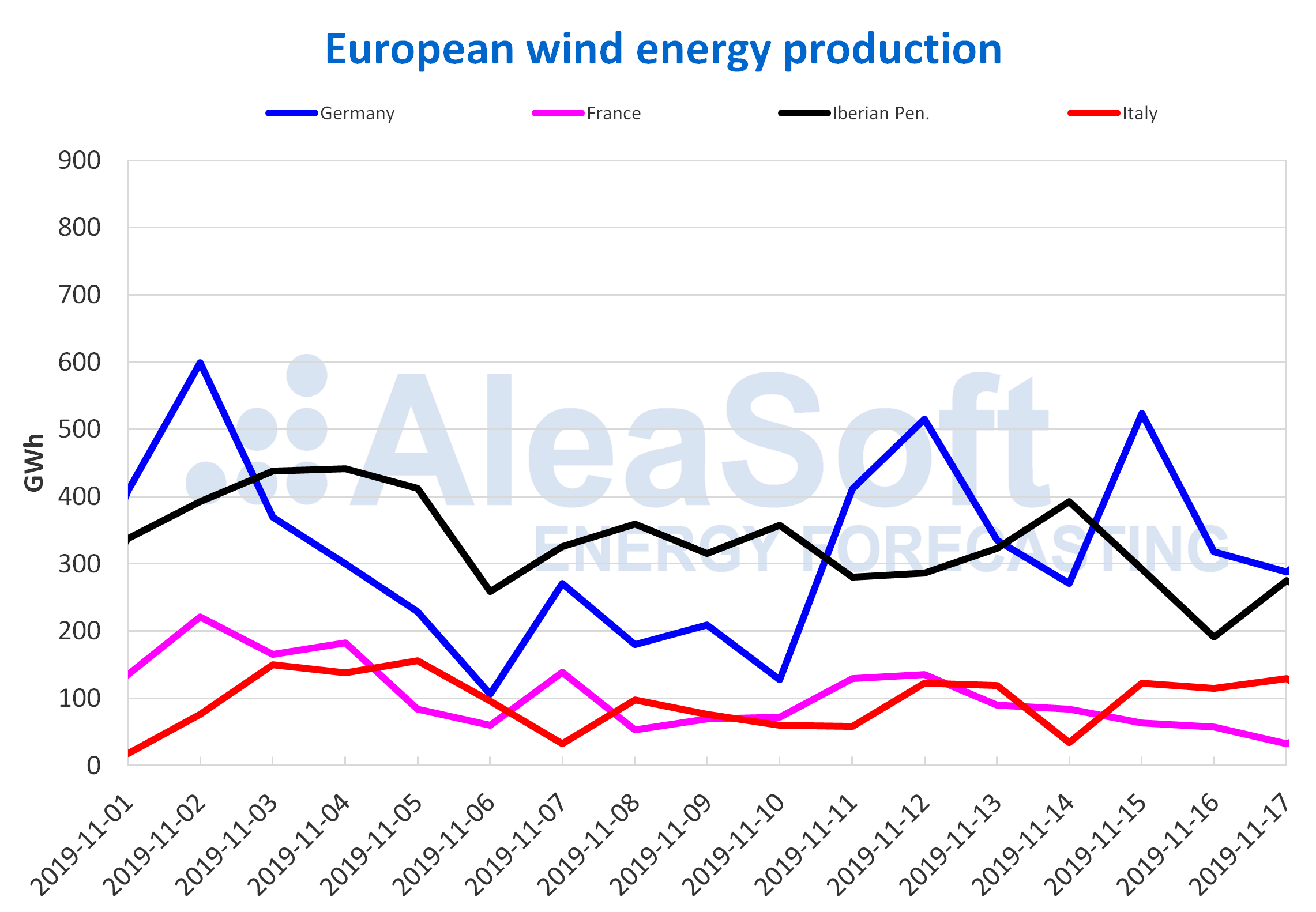 The electricity demand in most European markets continues to increase as average temperatures drop. The market with the largest increase was France, 12% compared to the previous week, even with the effect of the November 11 holiday that lowered the demand of that day. In Belgium, where it was also a holiday on November 11, the demand increased by 0.3%. In the rest of the analysed markets there were increases between 2.3% and 6.9%. At AleaSoft it is expected that during this week the average temperatures will generally fall but more moderately and that the electricity demand will decrease in Germany and Portugal, and that it will rise in the rest of the analysed markets. 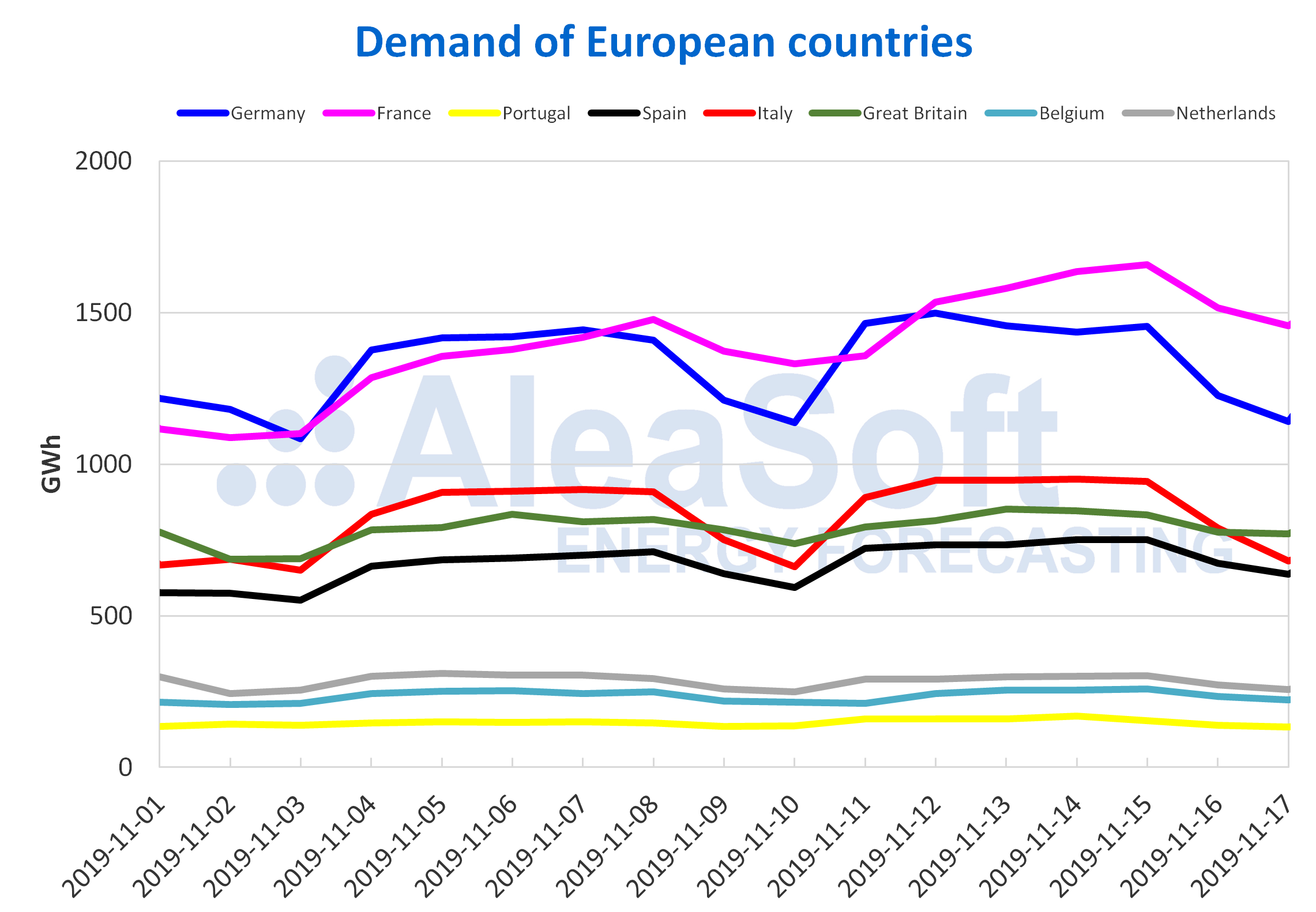 In general, last week of November 11 was characterised by a tendency to stabilise the prices of the European electricity markets. However, the prices in most markets continued to rise. This behaviour is mainly explained by the temperature, which, while continuing to fall, caused an increase in the electricity demand, which was very noticeable in the case of France.

In the case of the EPEX SPOT market of France, there is also a circumstantial factor that is now among the main causes of the price increase. This is the unscheduled shutdown of three nuclear reactors. They are three of the four reactors, of 900 MW each, that the Cruas nuclear power plant has. This decision is due to the preventive reviews that are being carried out for security reasons, after the 5.4 magnitude quake with epicentre just 20 km from the nuclear power plant. The retreat of 2.7 GW of nuclear capacity, precisely in the scenario of low temperatures and low renewable energy production, led to the increase in market prices.

The MIBEL market of Spain and Portugal is the one that registered the largest week‑on‑week difference, going from around €36/MWh on average in the week of November 4 to around €46/MWh in the past week.

On the other hand, only the EPEX SPOT markets of Germany and the Netherlands and the Nord Pool market of the Nordic countries registered decreases in the average price of the week of November 11 compared to the week of November 4. In the case of Germany, although temperatures also dropped causing the increase in electricity demand, there was a significant increase in wind energy production, of 87%, which led to the drop in prices by 5.6%.

In an analysis of the market settlement price for today, November 18, the IPEX market of Italy took the highest price position with €56.52/MWh, closely followed by the EPEX SPOT market of France, with €56.25/MWh. In third place was positioned MIBEL, which settled with an average price of €50.01/MWh. On the other hand, the Nord Pool market and the EPEX SPOT markets of Germany and the Netherlands have the lowest prices in Europe today, with €42.28/MWh, €41.36/MWh and €40.96/MWh respectively. 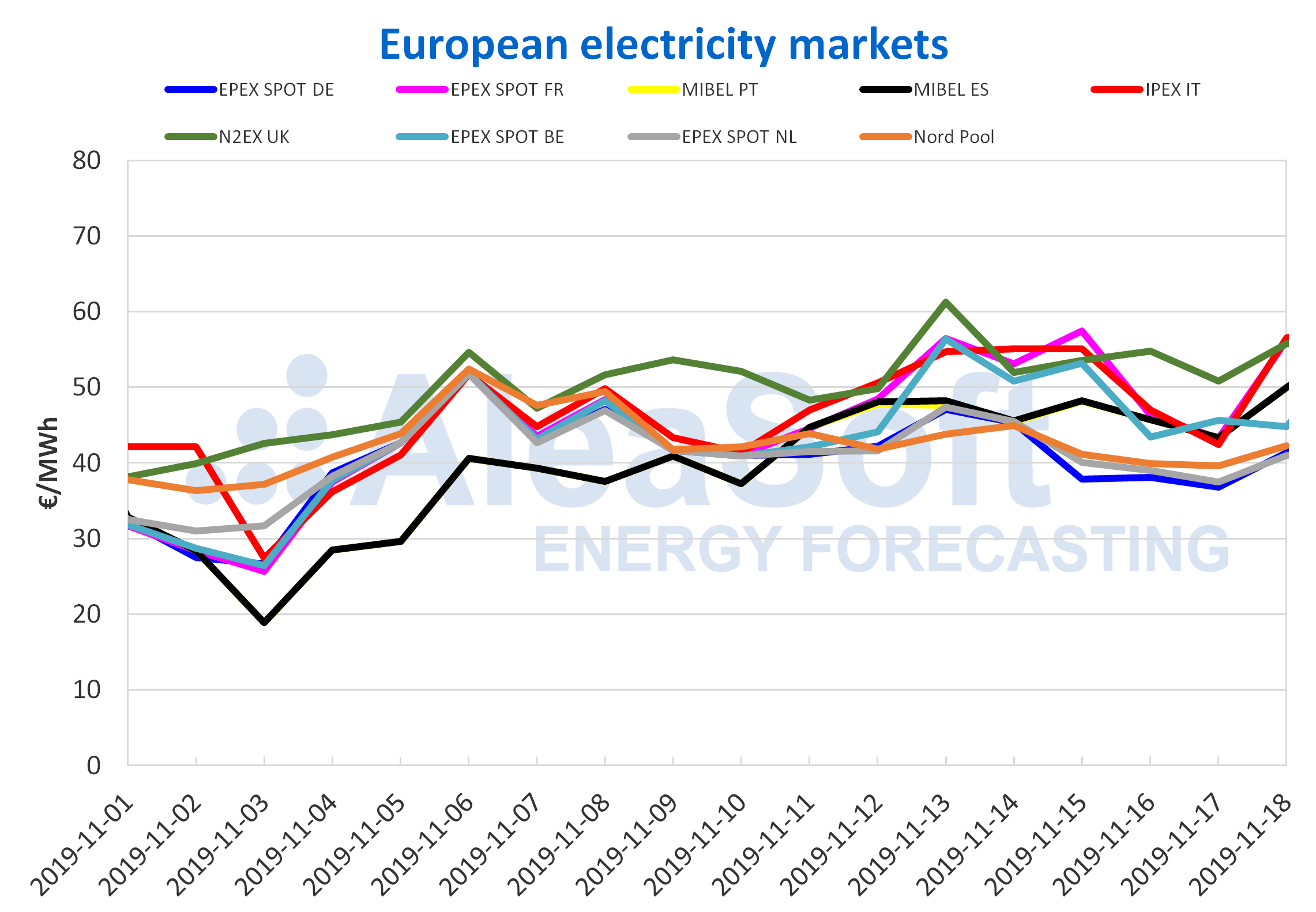 According to AleaSoft’s forecasts, the prices will continue to rise this week, as it was said, the electricity demand is expected to increase in much of the continent and the wind energy production is expected to fall.

The prices of European electricity futures at the end of last week continued to be lower than those of Friday, November 8. In the product of the first quarter of 2020, there were declines of between 0.4% and 3.7%. This last value corresponds to the futures of the Nordic countries in the ICE market, where on Friday, November 15, the settlement price was almost €2/MWh below the previous Friday. The most moderate variation was that of the EEX market of France, with a difference of ‑€0.21/MWh.

As for electricity futures for the year 2020, there was also a general drop in market prices. The EEX market of Spain, with a variation of ‑2.2%, was the one with the greatest decrease, settling on Friday, November 15, €1.17/MWh below the previous Friday. The EEX market of France was also the one with the least change in this product, with a settlement price that was 0.6% below the previous Friday.

The Brent oil futures prices for the month of January 2020 in the ICE market fell slightly on Thursday, November 14, 0.1% compared to Wednesday. But on Friday, November 15, they rose again, 1.6% compared to the previous day. Thus, on Friday a settlement price of $63.30/bbl was reached, which is the highest so far this month. This behaviour is conditioned by the prospects of agreement between China and the United States, which could cause prices to continue growing in the coming days.

The TTF gas futures prices in the ICE market for the month of December, the last days of last week abandoned the downward trend of previous days. On Thursday and Friday of last week there were daily increases of 1.4% and 0.3% respectively. With these increases, the settlement price of Friday, November 15, reached €15.71/MWh, but it was still 1.4% lower than the price of the previous Friday. The negotiations on the supply of gas from Russia to the European Union through Ukraine may influence the TTF gas futures prices in the coming days.

The API 2 coal futures prices in the ICE market for the month of December on Thursday and Friday of last week continued with the upward trend that began on Tuesday, November 12, with increases of 0.6% and 0, 3% respectively. The settlement price of Friday, November 15, was $57.50/t, the highest of the week.

The CO2 emission rights futures prices in the EEX market for the December 2019 reference contract fell the last days of last week. On Thursday, November 14, the price fell 1.8% compared to Wednesday. On Friday, November 15, the decrease was 0.5% and the settlement price was €23.85/t. At AleaSoft it is expected that in the coming days the downward trend in prices will continue. 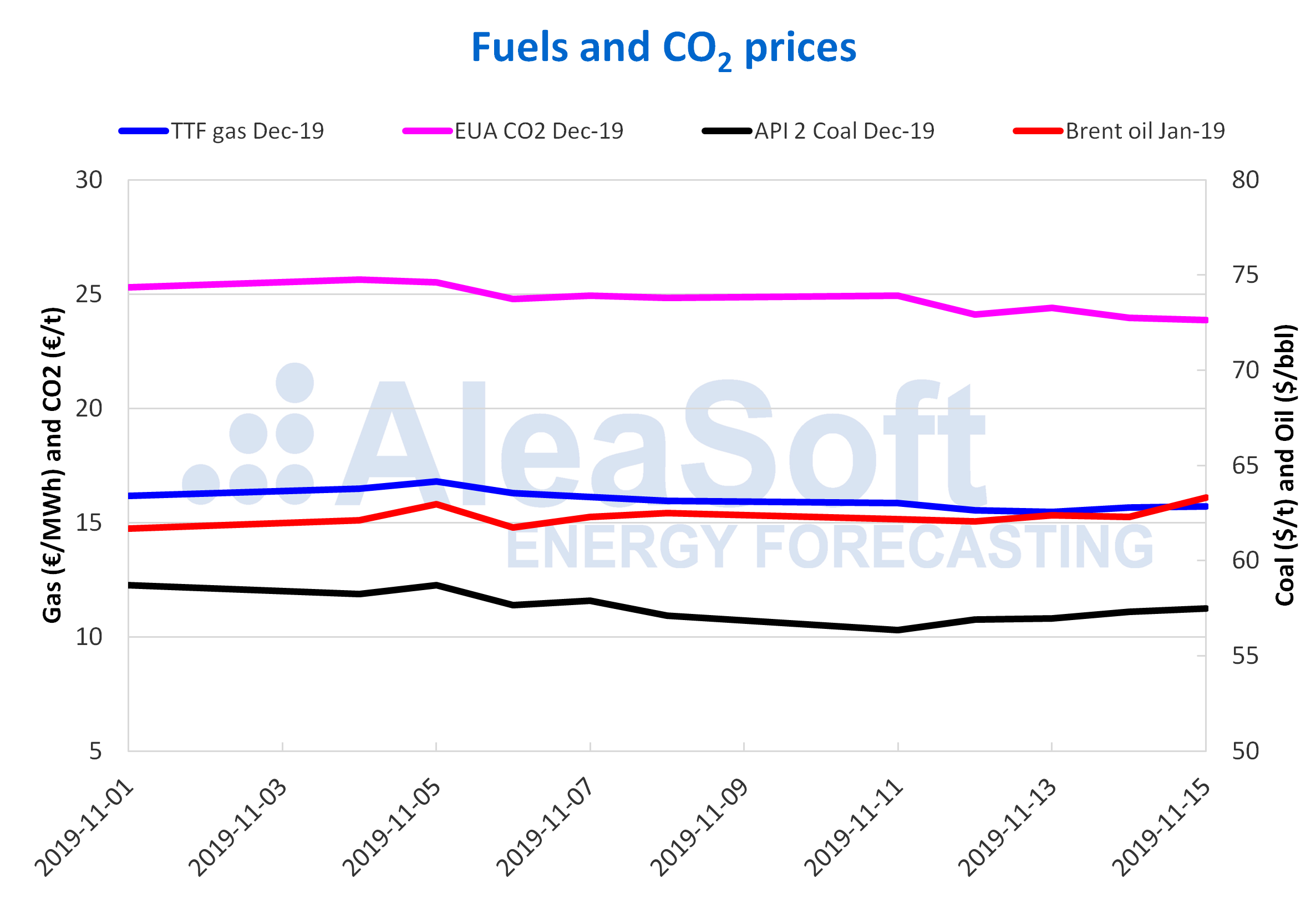