From last Monday, January 13, to Wednesday, January 15, the average solar energy production of the European markets fell compared to the average of the previous week. The German market behaved differently from the rest, registering a 60% increase in the production of these three days compared to last week. Among the markets with the highest capacity for solar energy generation, it was in Spain where it decreased the most, with a variation of ‑22%. In France and Italy the decreases were 10% and 14% respectively. In Portugal there was a decrease in production, from 3 GWh on average of last week to 1 GWh so far this week, representing a variation of ‑47%.

The trend continues to rise in the days elapsed of January 2020 for the entire European continent, in year‑on‑year terms. The largest increase occurred in Germany, where the solar energy production doubled, and had an increase of 134%. The Iberian Peninsula and Italy had similar increases, registering rises of 11% and 12% respectively, and the production so far this year 2020, of 459 GWh and 456 GWh respectively, only has 3 GWh of difference.

At AleaSoft it is expected that during the rest of the current week, the daily solar energy production will decrease in Italy compared to the first three days of the week, and that similar values will be maintained in Germany and Spain.

The Portuguese Environment Minister, João Pedro Matos Fernandes, announced at a hearing in the Parliament last Tuesday, January 14, that the solar capacity auction will be held in March. In addition, he said that the storage option will be included for promoters who intend to develop this type of projects. The minister revealed that a total of 700 MW to 800 MW will be tendered. 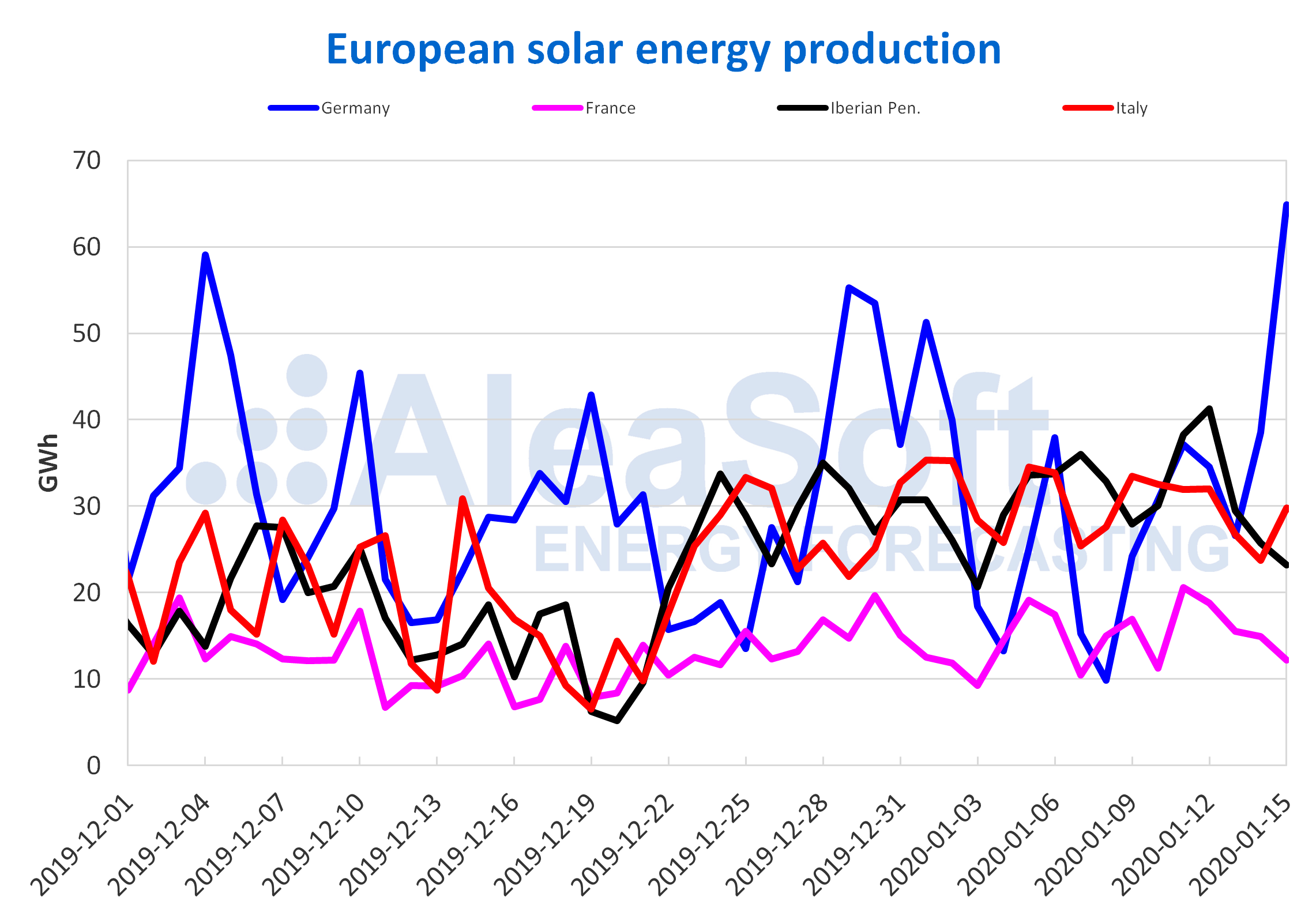 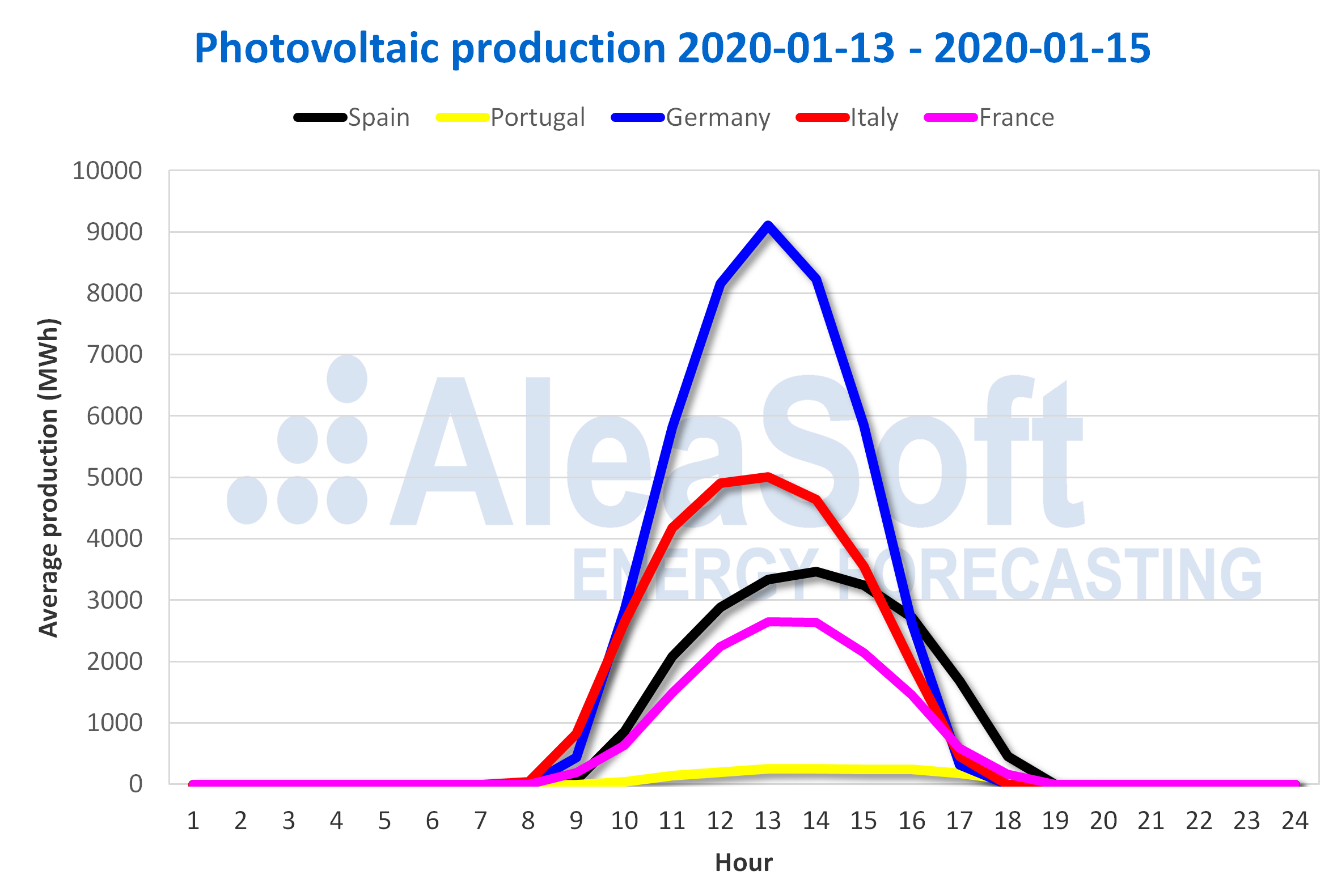 The wind energy production marked increases from January 13 to January 15 compared to last week’s average. In the Portuguese market it tripled, while in the Spanish market it doubled. Increases of 82% and 49% were registered in France and Germany. In the case of France, on Tuesday, January 14, a record of wind energy production was broken, with a total of 277 GWh. On the other hand, the Italian market suffered a fall of 81%.

According to the year‑on‑year analysis of the first half of 2020, the wind energy production decreased in most markets. The decrease in Germany was 7.9%, in Italy 43% and in the Iberian Peninsula 37%. On the other hand, the French market had an increase of 41%. 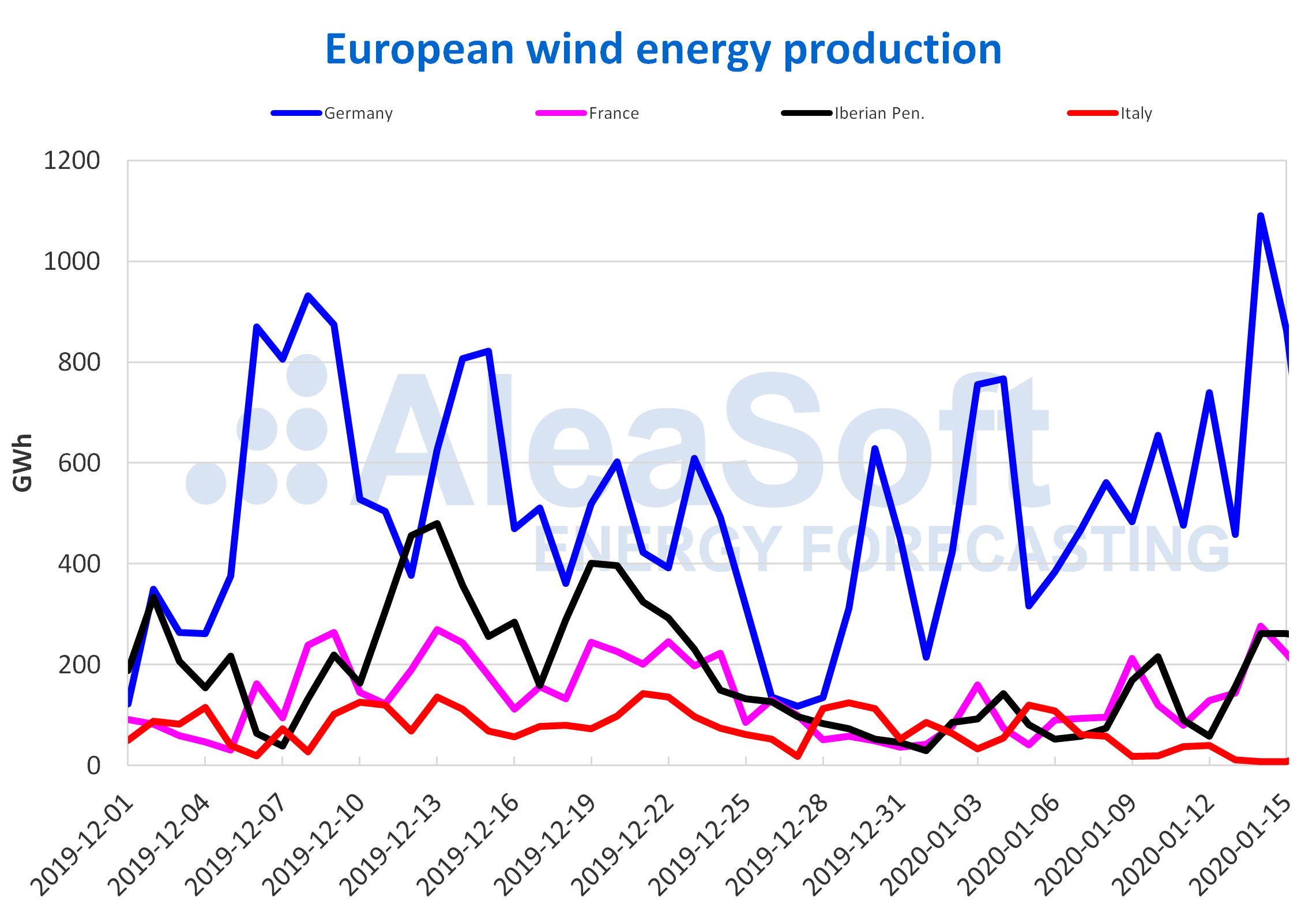 The electricity demand increased in much of Europe in the first days of this week compared to the same period of last week. This was mainly influenced by the effect of the January 6 holiday on the first three days of last week. In Germany the rise was 6.0%. In Portugal it increased 1.5%, while in France it fell by the same proportion. 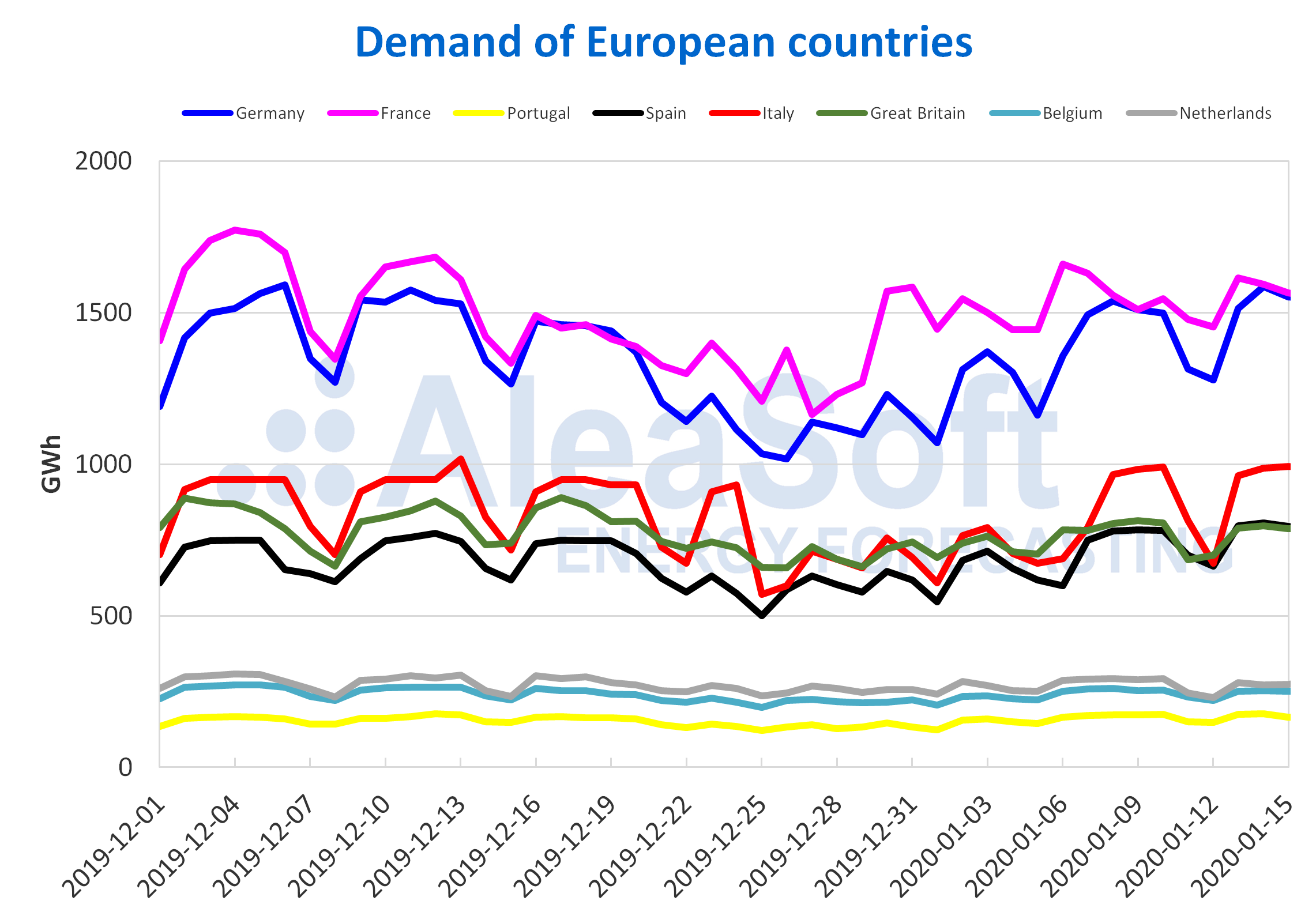 The average solar energy production in Spain, which includes photovoltaic and solar thermal energy, fell 7 GWh from Monday to Wednesday of this week compared to the average of the previous week, which represented a decrease of ‑22%. On the other hand, there was a 12% year‑on‑year increase in the first 15 days of January.

As for wind energy production, this week the average of last week was exceeded from Monday to Wednesday, reaching an increase of 102%. In contrast, a 39% year‑on‑year fall was registered for the days elapsed in January 2020.

The electricity demand of Mailand Spain from January 13 to January 15 exceeded that of the same period of last week by 13%, due to the influence of the effect of the holiday of January 6 on the days of last week.

At the moment all nuclear power plants are working at full capacity and the nuclear energy production maintains a daily level of 170 GWh. 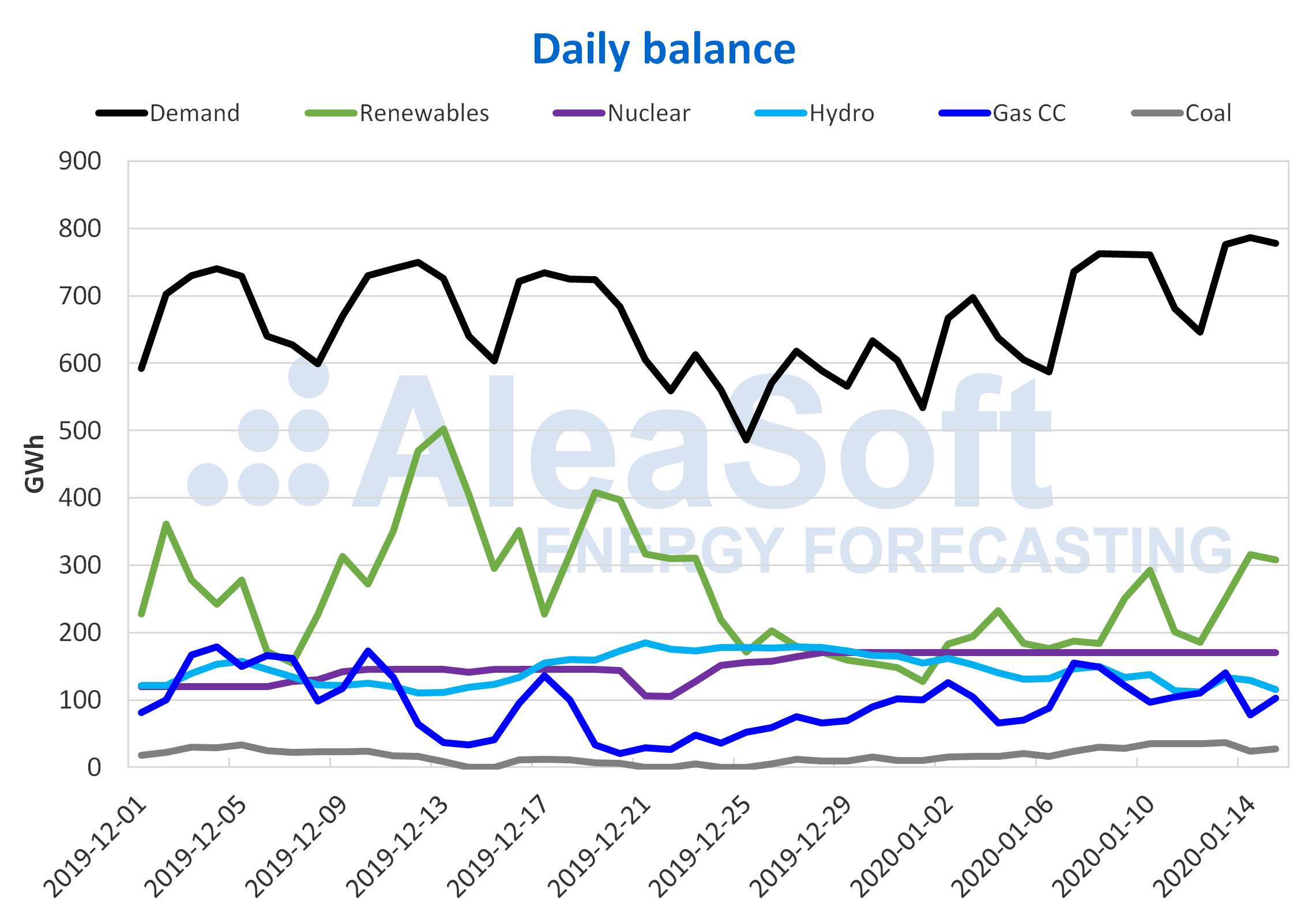 The level of the hydroelectric reserves increased by 1.3% compared to the previous report. The reserves currently have 12 656 GWh, which represents 55% of the maximum available capacity, according to data from the latest Hydrological Bulletin of the Ministry for Ecological Transition.

So far this week, the European electricity markets prices fell in most markets compared to the same days of the previous week. The EPEX SPOT market of Germany was the one with the greatest variation, with a decrease of 16%. The rest of the EPEX SPOT markets of France, Belgium and the Netherlands had declines of between 13% and 12%. The Nord Pool market of the Nordic countries decreased by 11%, while the MIBEL market of Portugal and Spain, and the N2EX market of Great Britain were the ones with the lowest declines, of 8.6%, 8.2% and 6.2% respectively . The exception was the IPEX market of Italy, where the prices increased by 10% due to lower wind and solar energy production together with an increase in its demand of 20%. With an average price of €53.91/MWh, the Italian market ranked as the highest price during the first four days of the week. The rest of these markets were between €31.04/MWh of the German market and €40.54/MWh in the Spanish market. On the other hand, the Nord Pool market, with an average price of €24.54/MWh, was the one with the lowest price during most of the elapsed days, which placed it as the market with the lowest price in the continent. 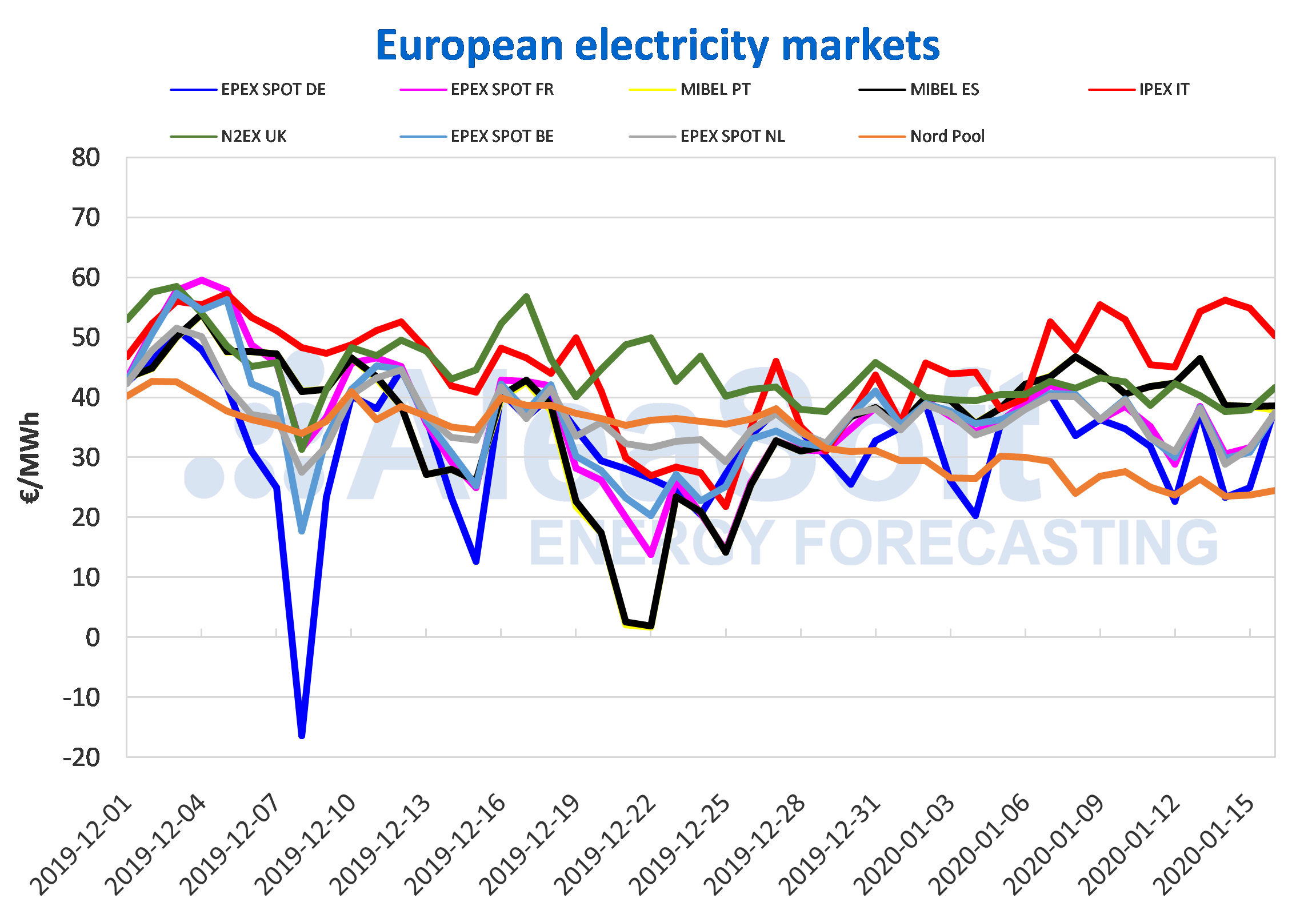 At AleaSoft it is expected that in the rest of the days of this week the prices maintain their trend and continue below the average price of last week in most European markets, backed by a recovery of the wind energy production and in the case of Germany also of the solar energy production.

In the MIBEL market of Spain and Portugal, the average prices so far this week were €40.54/MWh and €40.37/MWh, respectively. With variations of ‑8.2% in the Spanish pole and ‑8.6% in the Portuguese pole compared to the same days of last week, they were the second and the third in the list of markets with the highest prices during the first four days of this week. The recovery in the wind energy production so far this week compared to the same days of the previous week lowered the prices from Tuesday, January 14, despite a higher electricity demand for those days in both countries.

At AleaSoft, the prices are expected to continue to fall during the rest of the week, favoured by the decrease in demand during the weekend and a greater wind energy production for these days.

The electricity futures prices for the product of the second quarter of 2020 registered decreases in all the markets analysed by AleaSoft between the session of last Friday, January 10, and that of Wednesday, January 15. The most pronounced decrease was in the Nordic markets of ICE and NASDAQ, being the ones with the lowest price and also registering decreases of 7.6% and 7.7% respectively. On the other hand, the OMIP market of Spain and Portugal presented the smallest variation for this product, with decreases of 1.0% in both countries. The EEX market of Italy continued to be the one with the highest price, settling the session on January 15 at €44.48/MWh.

Regarding the futures for the following calendar year, 2021, the behaviour of the European markets was also downward. The ICE and NASDAQ markets of the Nordic countries were also the ones with the greatest decrease, with 3.6% and 3.8% respectively. The market with the lowest change between these days was the EEX of Spain, with a 1.1% decrease in this case. The EEX market of Italy was also the futures market with the highest price on this product and in general the variations of all markets stood at an average drop of 2.0%.

The Brent oil futures prices for the month of March 2020 in the ICE market, on Monday of this week continued with the downward trend of the previous week. However, on Tuesday, January 14, the settlement price recovered 0.5%. But on Wednesday, it went back down to $64.00/bbl, the lowest value registered so far this month.

The prices could rise in the next few days due to the drop in the US oil reserves. As regards the signing of the first phase of the trade agreement reached between China and the United States, it could take time to be noticed its influence, since although China committed to increase its energy imports, the tariffs remain.

The TTF gas futures prices in the ICE market for the month of February 2020, on Monday of this week reached a settlement price of €12.05/MWh, a value €0.11/MWh higher than that of the previous Friday. But on Tuesday the prices began to decline. The declines continued on Wednesday reaching a settlement price of €11.18/MWh, 6.6% lower than that of Wednesday of the previous week and the lowest in the last two years.

The TTF gas prices in the spot market started this week with an upward trend. But for Wednesday, January 15, this trend changed and the prices began to decline. The index price reached for Thursday, January 16, is €11.11/MWh.

The API 2 coal futures prices in the ICE market for the month of February 2020 on Monday, January 13, reached a settlement price of $55.35/t, representing an increase of 1.6% over the previous Friday. However, on Tuesday a downward trend began and on Wednesday the settlement price was already $52.25/t, the lowest of the last two years.

The reduction in prices of coal from South Africa, as well as the New Year holidays in China allowed these declines. However, the problems of supply from South Africa can continue until the rainy season ends at the end of March.

The CO2 emission rights futures prices in the EEX market for the December 2020 reference contract began this week continuing the downward trend that began on Friday of the previous week until reaching a settlement price of €23.84/t on Tuesday. There was no such low value since mid‑November. But on Wednesday the price recovered 2.8% to €24.51/t. 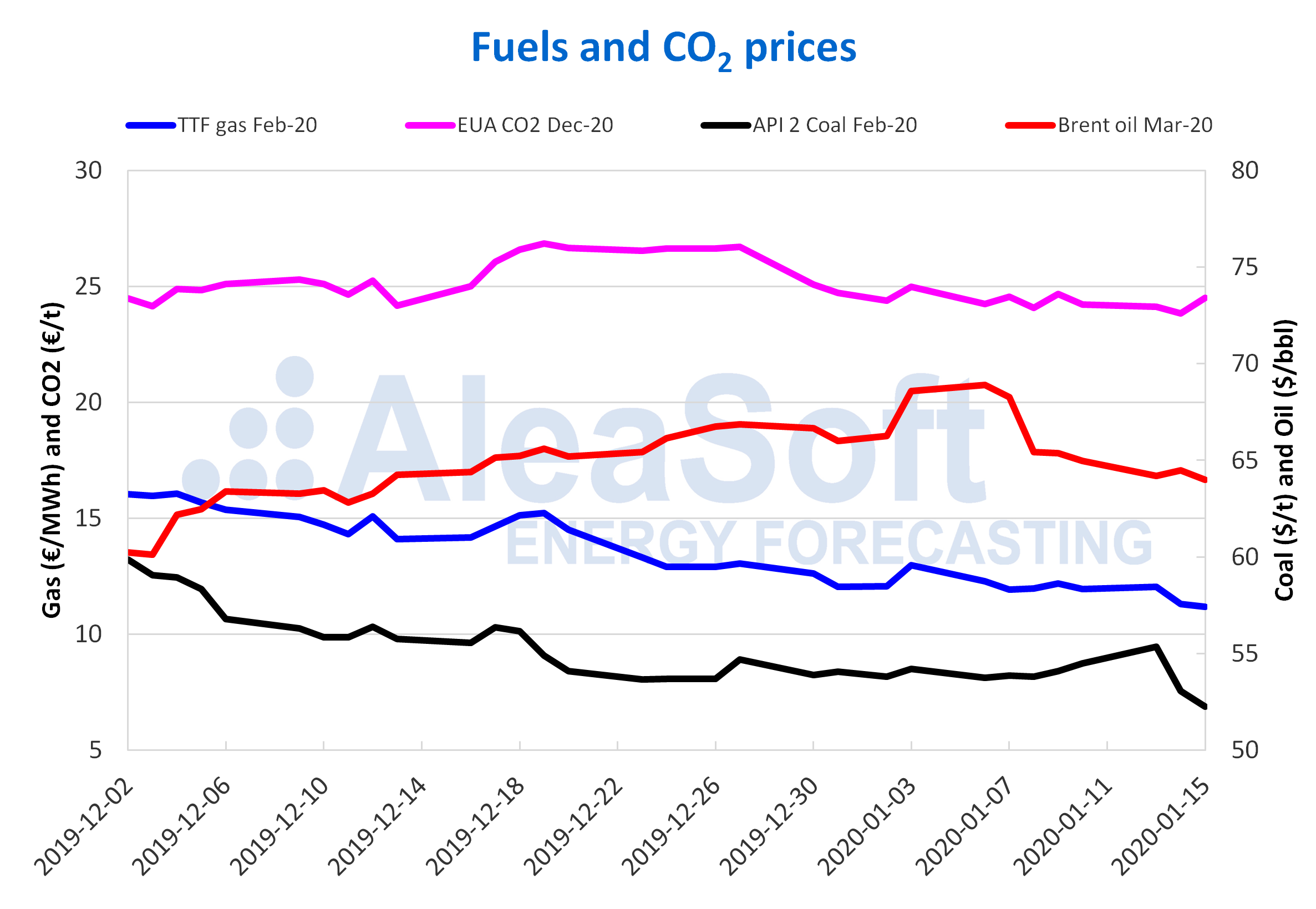