Solar energy production record for a January day in Germany

The German market set a record of maximum daily solar energy production for the month of January, with 66 GWh produced on the 16th. This market had a weekly recovery of 66%. In general, last week the declines in solar energy production predominated in the European electricity markets compared to the week of January 6. For the markets of the Iberian Peninsula, the falls were 32% and 29% respectively in Portugal and Spain, in the same way in the Italian market it was 9.6%. The average level of solar energy production decreased in France from Monday to Wednesday, but it recovered at the end of the week and reached a weekly increase of 0.4%.

The first 19 days of January were favourable for the generation with solar technology. The German market leads the year‑on‑year increases with an increase of 80%. In the case of Spain there was an increase of 19%. While, in the rest of the markets, the increases were between 12% and 13%.

Decreases in solar energy production are expected for this week in the markets of Spain and Italy, while in Germany it is expected to continue increasing. 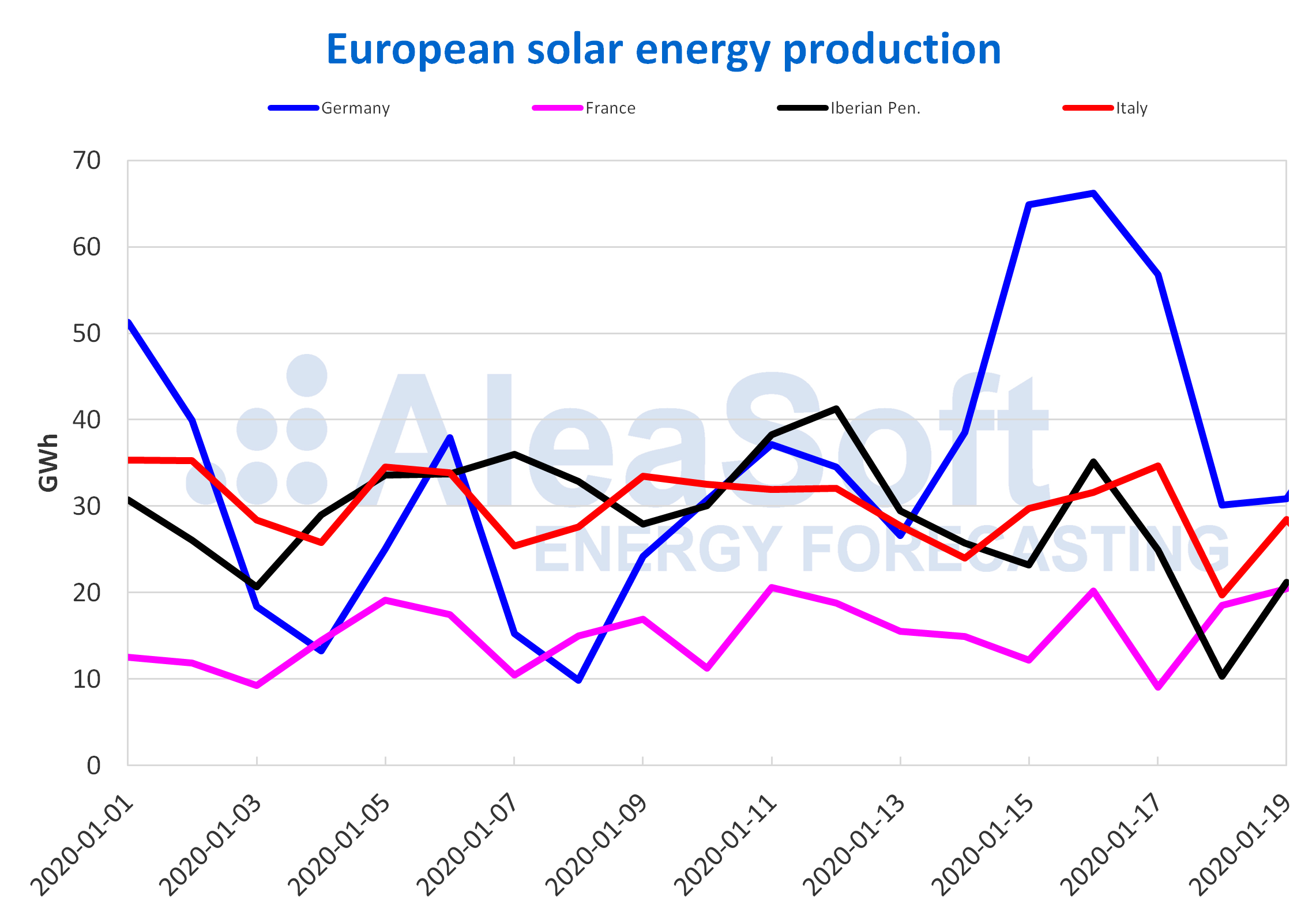 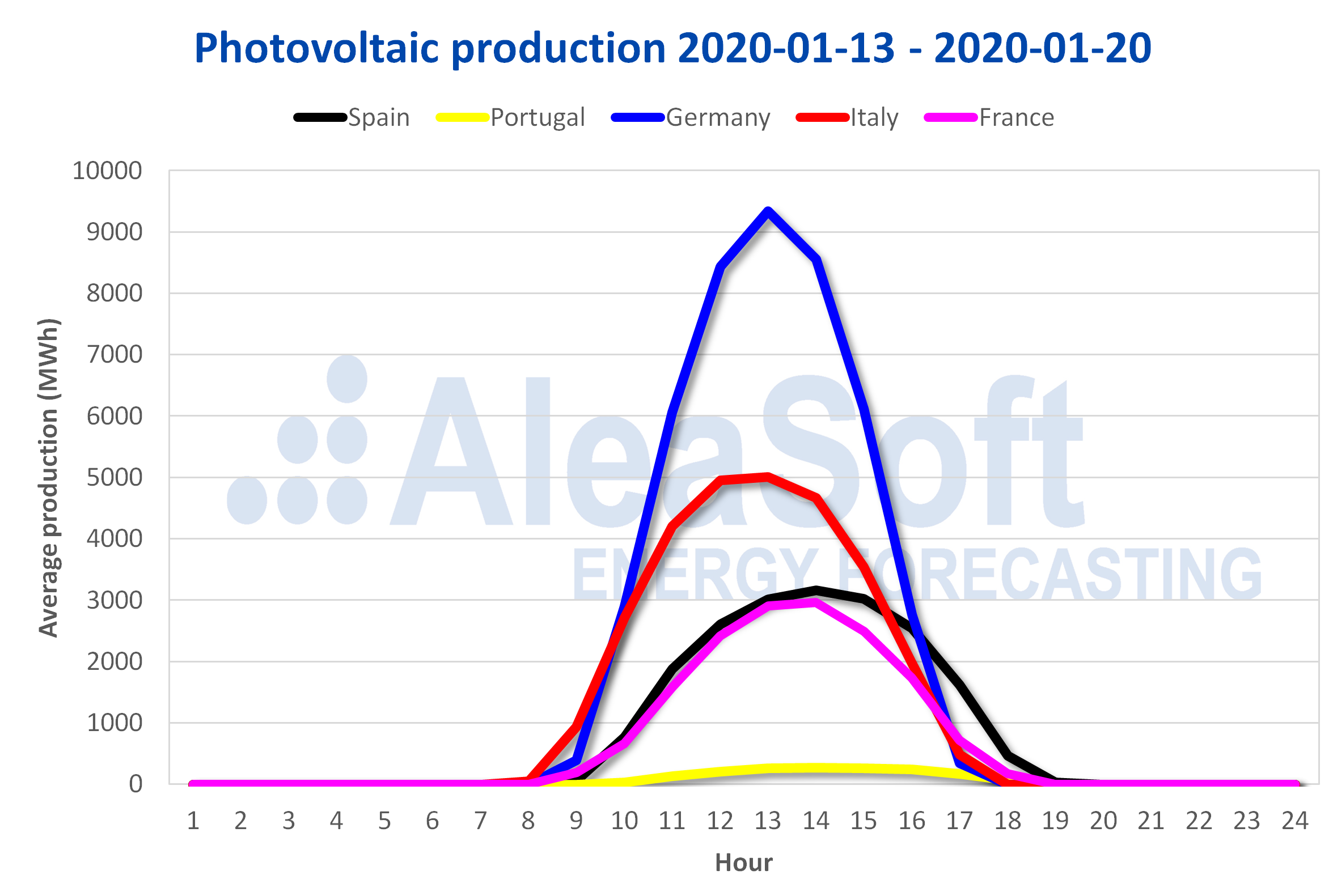 The strong winds of the storms of last week and the beginning of the current one on the Iberian Peninsula led to exceed the double of the wind energy production of the previous week. In the Portuguese market, the wind energy generation exceeded triple of the previous seven days, with an increase of 240%. On the other hand, in Spain the rise was more than double, registering an increase of 148%. The situation for the Italian market was totally different, registering a 31% drop.

In spite of these weekly increases, the wind energy production of the days elapsed in January decreased in a general way in year‑on‑year terms. In this case, the increases only occurred in the markets of France and Portugal, being 45% and 16% respectively. The Italian market registered a more marked decrease, of 37%. The markets of Germany and Spain fell 7% and 13% respectively.

At AleaSoft it is expected that this week the wind energy production will decrease in most European markets, except in Spain and Italy.

The electricity demand in most European electricity markets was higher last week compared to the previous week, mainly because of the effect of the January 6 holiday. The temperatures were gradually decreasing during the last week in much of the European continent, but in general, the average level was above that of the previous week. In Italy, the demand increased 9.0% and in Spain 4.8%. The markets of France and Germany had somewhat smaller increases than those mentioned above, with values of 0.4% and 2.0% respectively. In Portugal the decrease was 0.5%. Correcting the effect of the holiday of January 6, the variations in demand were 0.2% in Germany, ‑2.3% in Portugal and 0.5% in Spain.

During this week the average temperatures are expected to decrease and cause an increase in demand in much of the European markets. 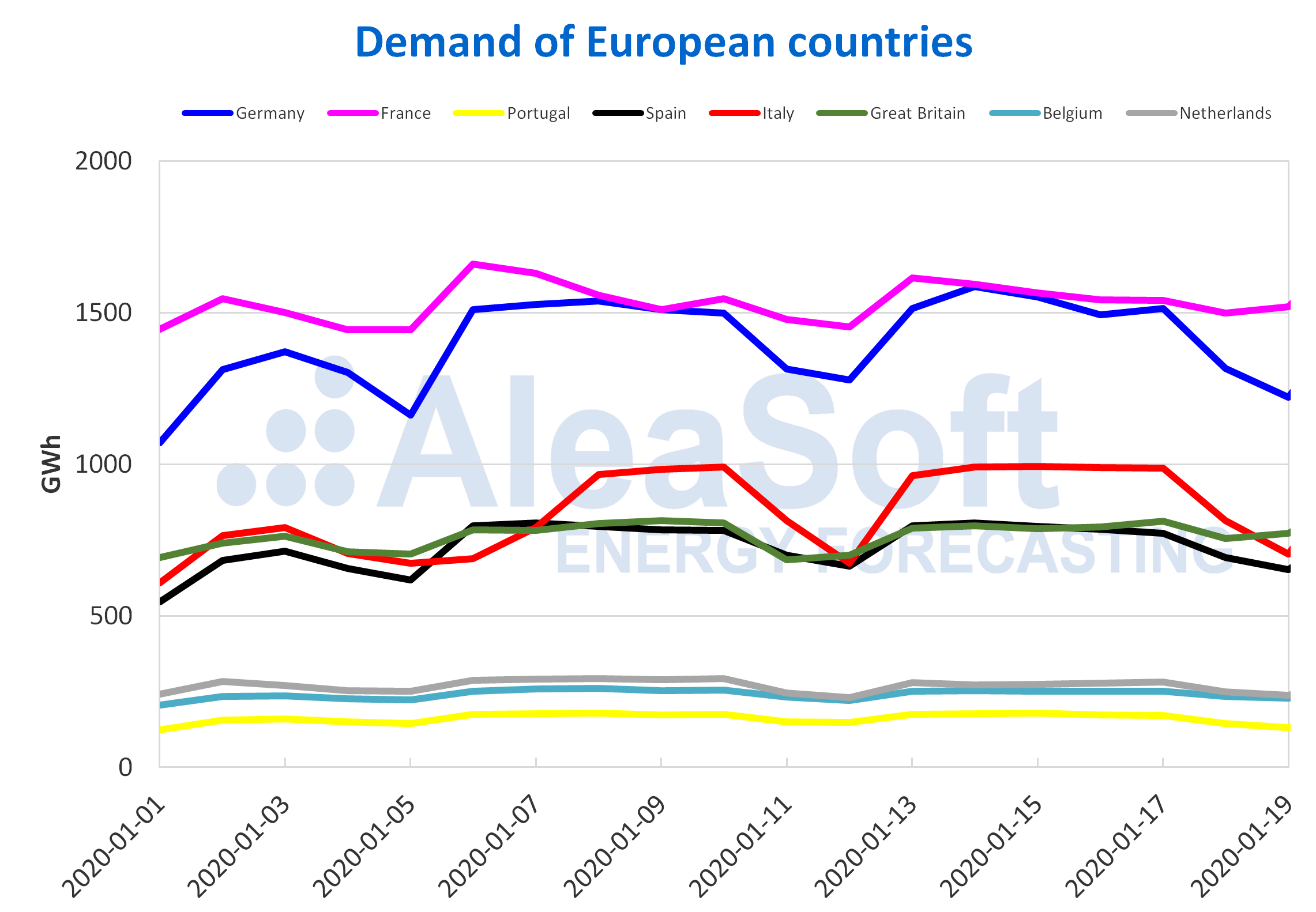 The prices of most European electricity markets decreased last week compared to the week of January 6. The IPEX market of Italy was the exception, with a 5.3% increase over the previous week and a weekly average price of €51.04/MWh. Since Monday, January 6, this market remained as the one with the highest price in Europe, ranking as the highest band for the rest of the markets and reaching the maximum value so far this year of €56.21/MWh on Tuesday, January 14. On the other hand, the Nord Pool market of the Nordic countries, with a decrease of 9.5% and an average price of €24.12/MWh in the recently concluded week, continues to be the market with the lowest price in the continent. In the prices of this market, there is a downward trend that began on January 6, after reaching an average value of €30.18/MWh the previous day, the highest so far this month for this market. The prices of the Nord Pool, which during the last week were around €24/MWh, positioned as the lowest band of the continent markets prices. Meanwhile, the average prices of the EPEX SPOT markets of Germany, France, Belgium, the Netherlands, the MIBEL market of Spain and Portugal and the N2EX market of Great Britain, showed variations between ‑11% and ‑3.8% during the week of January 13. The prices of these markets moved between €30/MWh and €40/MWh on most days, within the limit values set by the Italian and Nordic markets.

The N2EX market, with an average price of €40.06/MWh, was the one with the lowest decrease during the past week, of 3.8% and the second market with the highest price. On the other hand, the MIBEL markets of Spain and Portugal, with averages of €38.51/MWh and €38.42/MWh respectively, were the ones with the greatest decrease, of 11%, and the third and fourth of the markets with the highest prices in Europe. On the other side, the EPEX SPOT market of Germany, with a variation of ‑4.6% and an average of €32.40/MWh, was the second market with the lowest prices during the past week, followed by the market of The Netherlands, which was higher than the German market by €1.81/MWh.

This Monday, January 20, the Nord Pool market of the Nordic countries continued to be the market with the lowest price, with a daily average of €22.75/MWh. While the IPEX market, with an average of €45.86/MWh for this day, continued to be the one with the highest price, followed by the N2EX market, with a price of €45.07/MWh. The EPEX SPOT markets were between €44.53/MWh and €44.96/MWh. The MIBEL market of Portugal and Spain were the second and third market with the lowest price of the day, with a daily average of €34.94/MWh and €35.71/MWh. 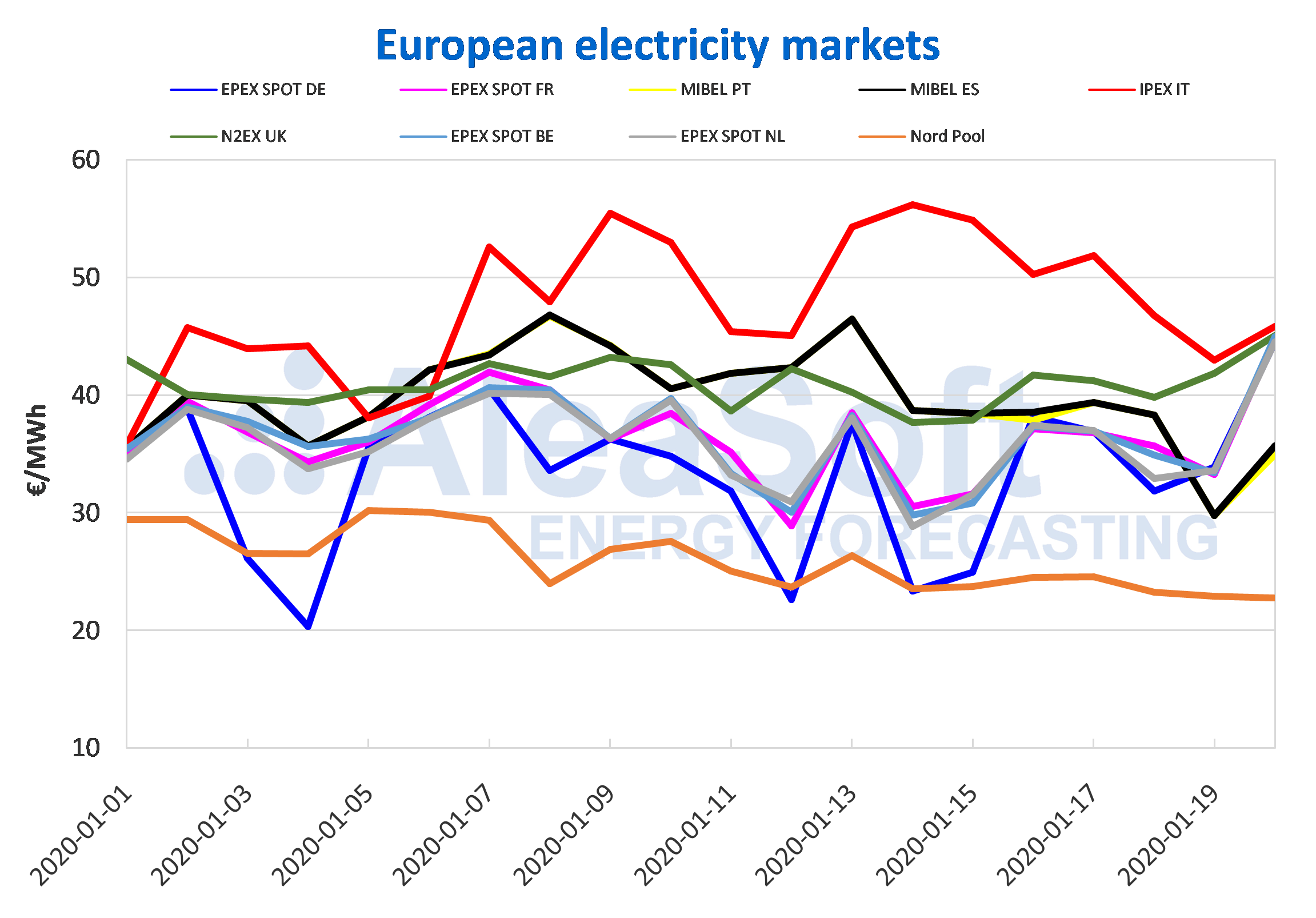 During the last week of January 13, the European electricity futures prices for the product of the second quarter of 2020 continued their downward trend. Despite this, in several markets the settlement price of Friday, January 17, was higher than that of the previous day. However, in all the markets analysed by AleaSoft, the price at the end of last week was lower than that of the previous Friday, January 10. The Nordic countries made headlines, reaching historical lows of the last two years, approaching €23/MWh. Compared to the previous week the decrease in the price of the Nordic countries, both for the ICE market and for the NASDAQ market, was more than 11%, being the markets with the greatest change during the week.

As for futures prices for the 2021 calendar year, there was also a decline. The decline continues to be led by the Nordic countries, with a ‑5.4% difference compared to the end of the previous week. The EEX market of Spain was the one with the lowest decline, settling on Friday 17 just €1.0 below the settlement price of the previous week, representing a variation of ‑2.1%.

The Brent oil futures prices for the month of March 2020 in the ICE market, despite registering some declines at the beginning of last week, on Thursday, January 16, started an upward trend. A settlement price of $64.85/bbl was reached on Friday. This value, although still $4.06/bbl lower than the maximum value of this month, reached on Monday, January 6, already exceeds $64.78/bbl reached on September 16, 2019 after the attacks on the Saudi Arabia oil facilities.

Reductions in the production of Libya and Iraq could cause price increases to continue in the coming days, as long as supply levels are not restored. Although, in the event that the interruptions continue, the OPEC could adjust its production levels, for this reason the price increases are not expected to be prolonged over time.

The TTF gas prices in the spot market started last week with increases that lasted until Tuesday. But as of Wednesday they began to descend until reaching an index price of €10.90/MWh for the past weekend. This price is the lowest registered since November 4, 2019, when the index price was €10.56/MWh.

The API 2 coal futures in the ICE market for the month of February 2020 on Monday, January 13, reached a settlement price of $55.35/t, the maximum so far this month. But the rest of last week the prices fell. On Friday, January 17, the settlement price was $50.10/t, 8.1% lower than that of the previous Friday and the lowest of the last two years.

The CO2 emission rights futures prices in the EEX market for the December 2020 reference contract began last week with decreases. As a result, a settlement price of €23.84/t was reached on Tuesday, January 14, the lowest value registered from the €23.58/t of November 19, 2019. But as of Wednesday, January 15, the prices began to increase. These increases made the settlement price of Friday, January 17, €25.44/t, the highest so far this year.

Last week, Germany announced that it will cancel the excess emission rights corresponding to the coal plants it plans to close in the coming years. In addition, it is planned to start a new coal power plant next summer and the construction of new gas plants in the country is planned. 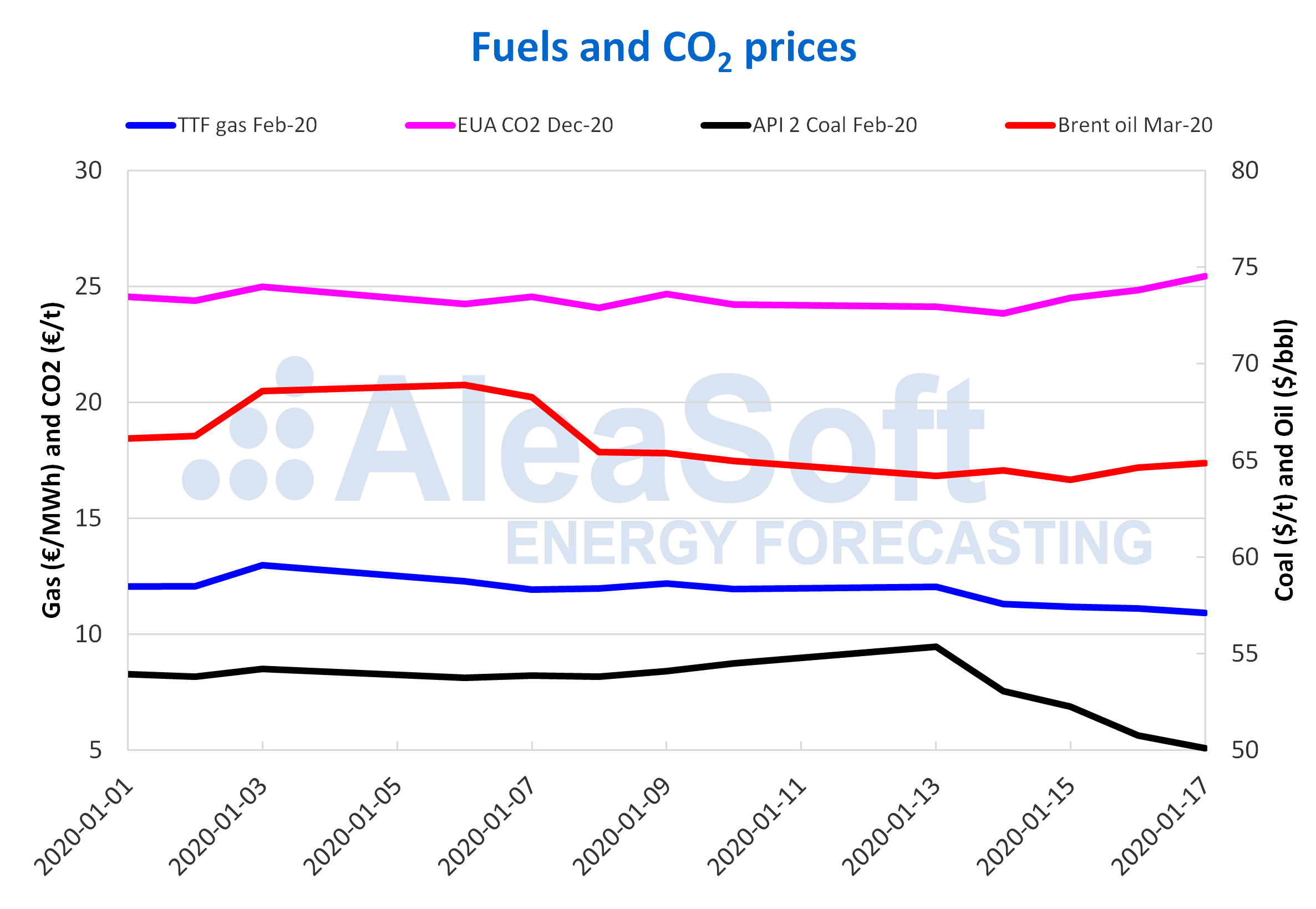 PrevAnteriorAleaSoft will participate in the wind energy and the market conference of AEE: experience of the auctions and future forecasts
SiguienteThe green hydrogen is the fuel of the futureNext
Facebook-f Twitter Linkedin Instagram