AleaSoft, January 15, 2020. The solar photovoltaic technology passed stages of growth and other less favourable in Spain, but, without a doubt, today is its best moment. AleaSoft analyses in this article the introduction and development of this technology in Spain, from its beginnings to the projection to 2030.

Spain is one of the countries in Europe with more hours of sunshine. This factor, together with the European commitments for the installation of renewable energies, as well as the strategic desirability of reducing the large external energy dependence and increasing the energy autonomy has made the solar energy production particularly attractive in Spain.

The birth of the photovoltaic energy in the Spanish electricity system dates back to 1984. It was in that year that Iberdrola installed the first photovoltaic plant connected to the grid in San Agustín de Guadalix. This connection, of 100 kWp, was the only one that the peninsula had for almost 10 years. In 1993, four systems were joined, each of 2.7 kWp, installed by ATERSA in private homes of Pozuelo de Alarcón. These facilities gave way to a series of projects that rather served a demonstrative role: 42 kWp in a school in Menorca, 13.5 kWp in the Solar Energy Institute of the Polytechnic University of Madrid, 53 kWp in the Library of Mataró, even a 1 MW plant in Toledo, which on the date of its inauguration, on June 7, 1994, was the largest photovoltaic solar power plant in Europe. At the end of 1995, the total capacity was about 1.6 MW, however, this technology remained in the field of research, without being regulated in the general context of the electricity system.

With the publication of the RD 2818/1998, there were established premiums of 60 and 30 pesetas per kWh injected into the grid for systems with nominal capacity lower and higher than 5 kWp respectively. In this way Spain joined the initiatives of the rest of Europe and recognised the need to strengthen this technology. Two years later, with RD 1663/2000, technical and administrative conditions were established that represented the true opening for the photovoltaic technology in the Spanish electricity system.

In spite of these incentives, in 2004 the photovoltaic energy represented a very small part of all renewable energy sources, which accounted for approximately 6.5% of the primary energy consumption. The objective set for 2010 was to cover at least 12% of the primary energy consumption through renewable energy, with a photovoltaic capacity of 400 MW.

Given the insufficient development of the renewable energies, the legislation changed several times in a short period. In 2004, the premiums system was replaced by the payment of a percentage of the Reference Average Tariff (TMR), and in 2007, it was changed again to set fixed premiums and fixed regulated tariffs. With this last change, the large photovoltaic installations were very benefited. Its high profitability favoured a large number of investments, especially in land, and in two years the installed capacity at the end of 2006 was multiplied by 27, a spectacular growth. 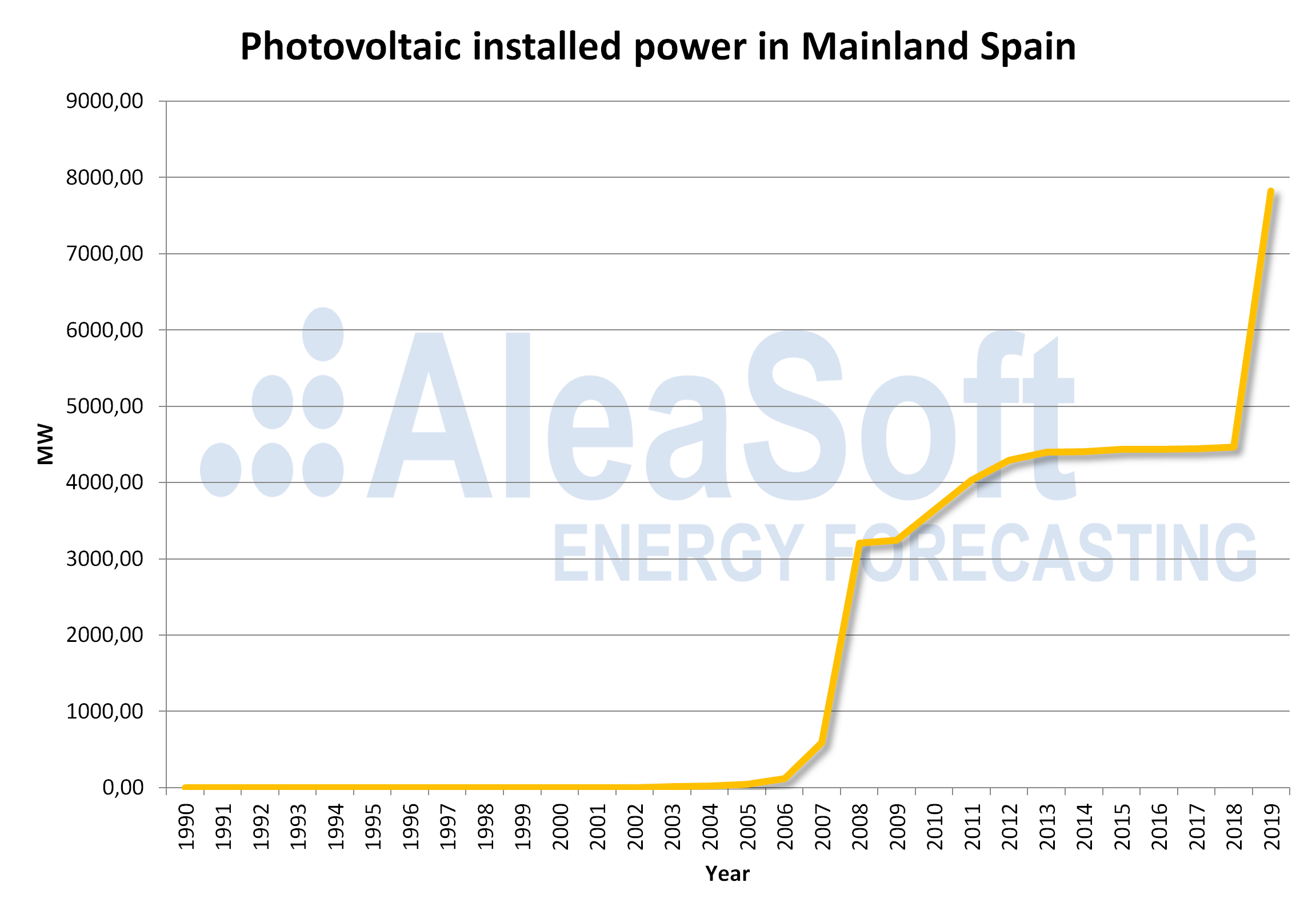 In this way, the photovoltaic energy passed in just two years from being a testimonial source in Spain to surpass the hydroelectric energy production by pure pumping. The brake to the rise of this technology was put by the economic crisis. Although even during that complicated period, the solar energy, including also the solar thermal technology, was second in installed capacity growth.

After the end of the crisis, the implementation of the photovoltaic energy continued to grow. However, it suffered several legislative blows. In 2013, the 7% tax on generation, a tax on electricity production, which was suspended in October 2018 and then reintroduced again in March 2019. In 2015, the popularly known “Sun tax” that was eliminated in October 2018 as part of an urgent action plan to lower the electricity bill.

Despite these legal brakes, the photovoltaic energy continued to progress, thanks to the lower cost of solar panels and the technological progress of their efficiency, which makes them profitable to sell energy directly in the market without the need for premiums. For this reason, this technology overcame the obstacles it faced. The installed capacity of photovoltaic technology has not receded in Spain since its appearance. 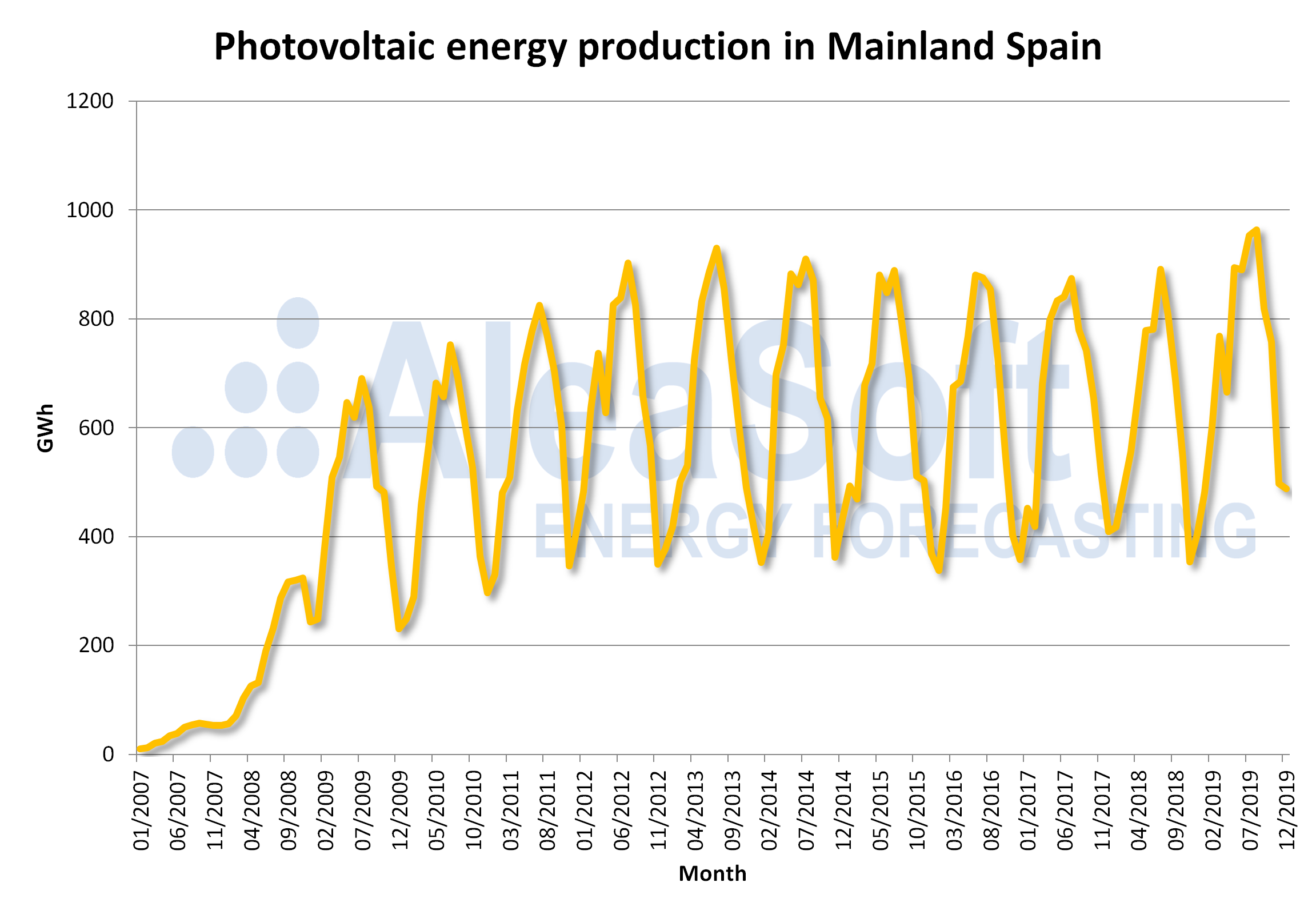 Currently, there is a clear commitment to the use of photovoltaic energy. At AleaSoft an analysis of the Royal Decree published in April 2019 where collective self‑consumption is enabled and promoted was carried out.

This new opening caused a new growth of a technology that has been present in the Spanish electricity system for more than 35 years. It could be said that 2019 was the year of the real return to the photovoltaic bet. From AleaSoft, the message to convey is that we are in the golden moment for the photovoltaic energy. It is no coincidence that until November 2019, more than 4 GW of renewable generation capacity were installed, of which 64% is photovoltaic energy.

The interest in taking advantage of this technology in Spain is evident. At present, the photovoltaic capacity installation is being triggered again. Also, with the new regulations that favour the self‑consumption, it is expected that the appearance of “prosumers” of electricity in the Spanish market will be noticeable. From AleaSoft it was already commented the tremendous importance of this technology and the moment in which Spain is currently. There are also currently market tools such as PPAs that allow reducing risks when carrying out a renewable energy project. At AleaSoft a specific product for the parties involved in a PPA was created, with which it is aimed to favour the agents in a way that facilitates the realisation of renewable energy projects.

The future of the photovoltaic energy in Spain is guaranteed. This is demonstrated by the National Energy and Climate Plan (NECP), which sets the goal of a 100% renewable electricity sector in 2050, with an intermediate stage of 74% in 2030. Precisely to achieve that goal of 2030 a total installed capacity of 44 GW of solar energy is expected by then, of which 37 GW will be of photovoltaic energy. This will make it the fastest growing renewable generation technology in the next 10 years. 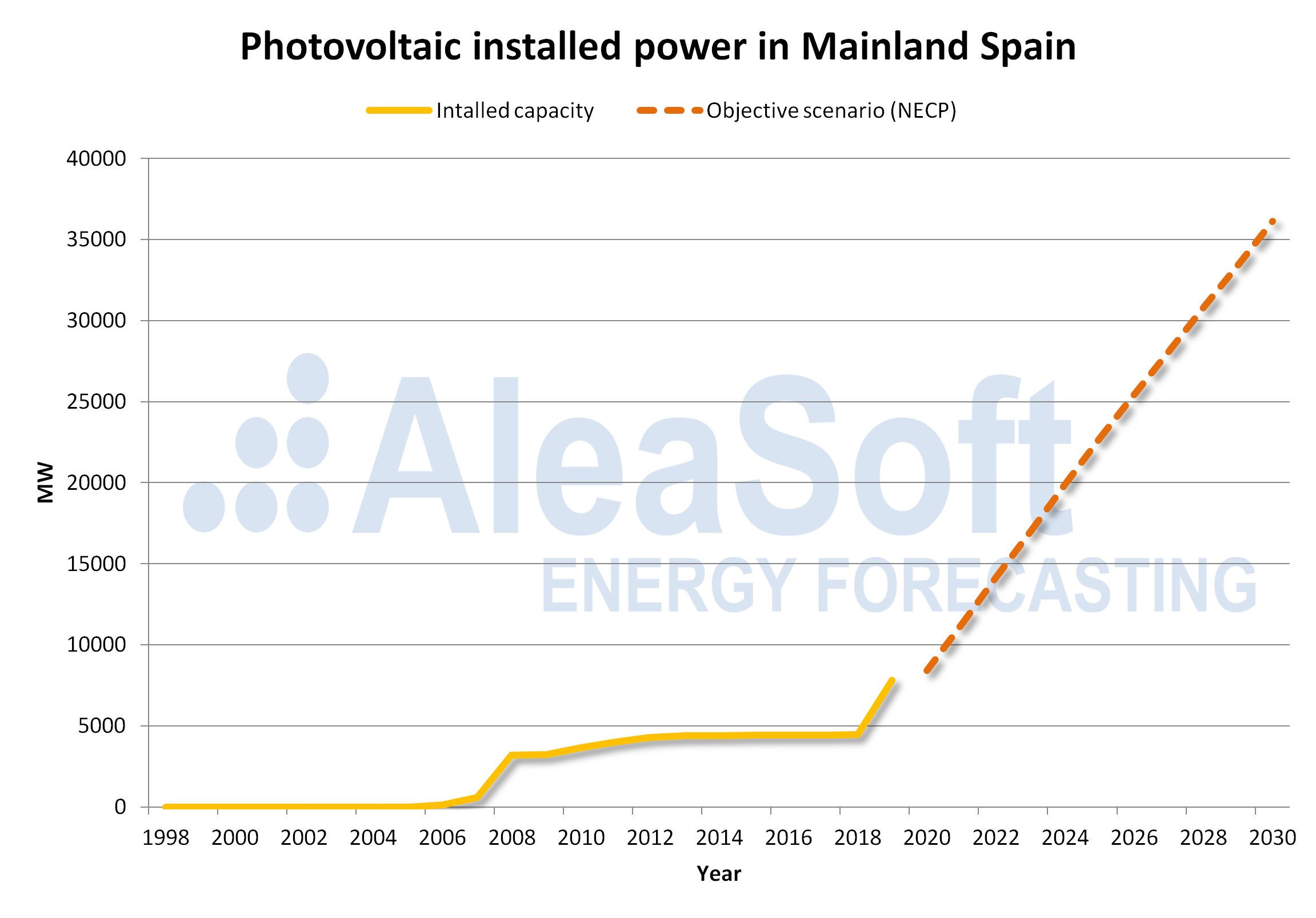 Source: Prepared by AleaSoft using data from REE and the NECP.

The forecasts and goals set are very promising for this technology, which is at its best moment today and is a tremendous opportunity for Spain. In the next few years, the photovoltaic energy will give much to talk about and AleaSoft will be on its side, not only telling its history but also being part of it.

PrevAnteriorThis week the increase of the wind energy is causing a decrease in markets prices in europe
SiguienteAleaSoft will participate in the wind energy and the market conference of AEE: experience of the auctions and future forecastsNext
Facebook-f Twitter Linkedin Instagram