AleaSoft Energy Forecasting, April 25, 2022. In the third week of April, the wind energy production increased in most European markets, which, together with lower demand in several markets, favoured the decrease in electricity markets prices. During the weekend, negative prices were reached in Belgium and the Netherlands and in the Iberian market some hours registered prices of €1.17/MWh. Gas and Brent prices fell, the first favouring the behaviour of the electricity markets, and CO2 prices rose.

The third week of April ended with a general reduction in solar energy production compared to the previous week. In the French market, the production fell by 23%, while in the Italian market it decreased by 21%. In the rest of the markets, the production fell between 3.5% and 13%. It should be noted that, although during the week the daily production in the Iberian Peninsula was mostly lower than the average of the elapsed days of the month, this increased in the last days of the week until exceeding it.

For the week of April 25, the AleaSoft Energy Forecasting’s solar energy production forecasting indicates an increase in production in Italy and Germany, while a reduction in production with this technology is expected in the Spanish market. 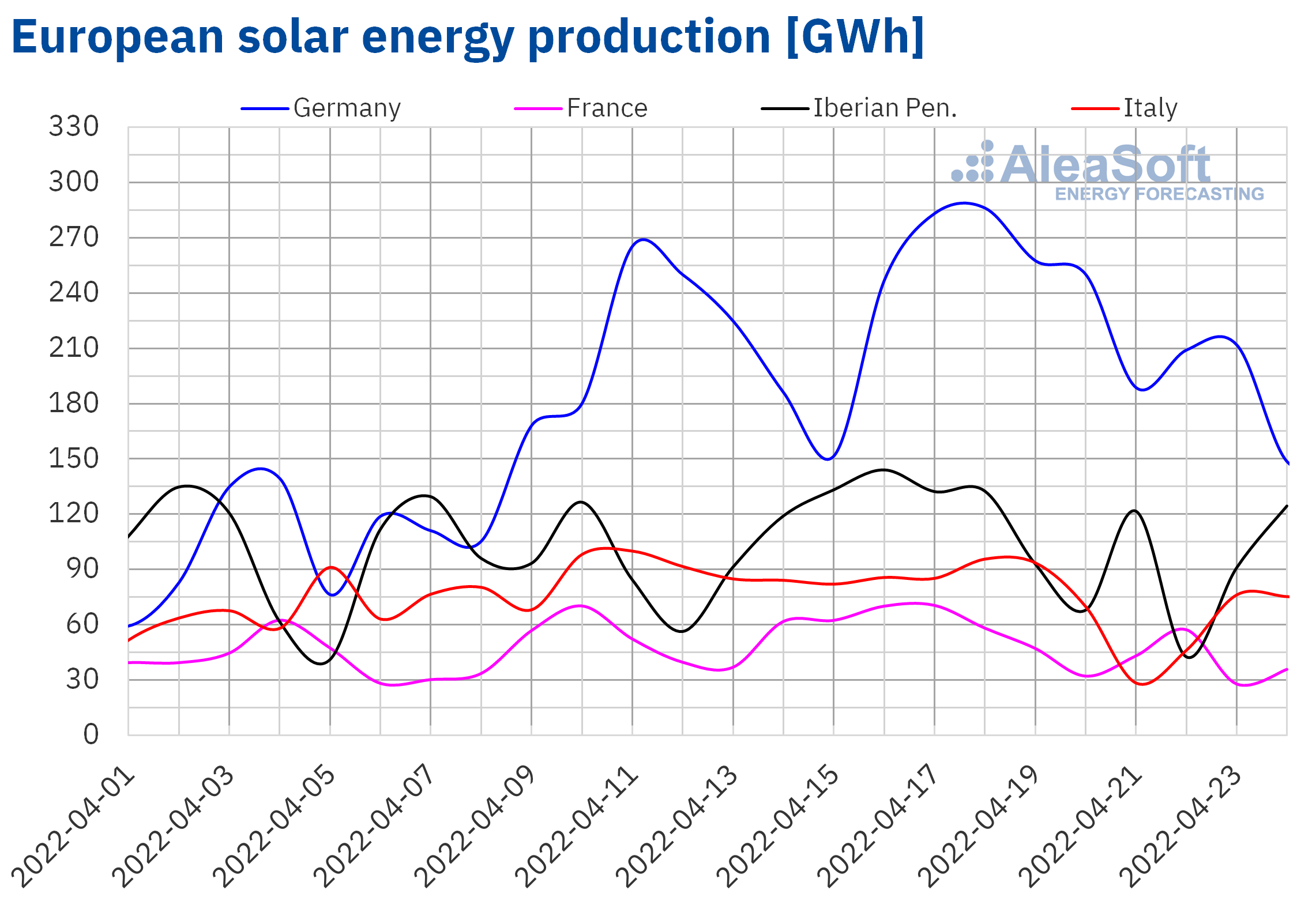 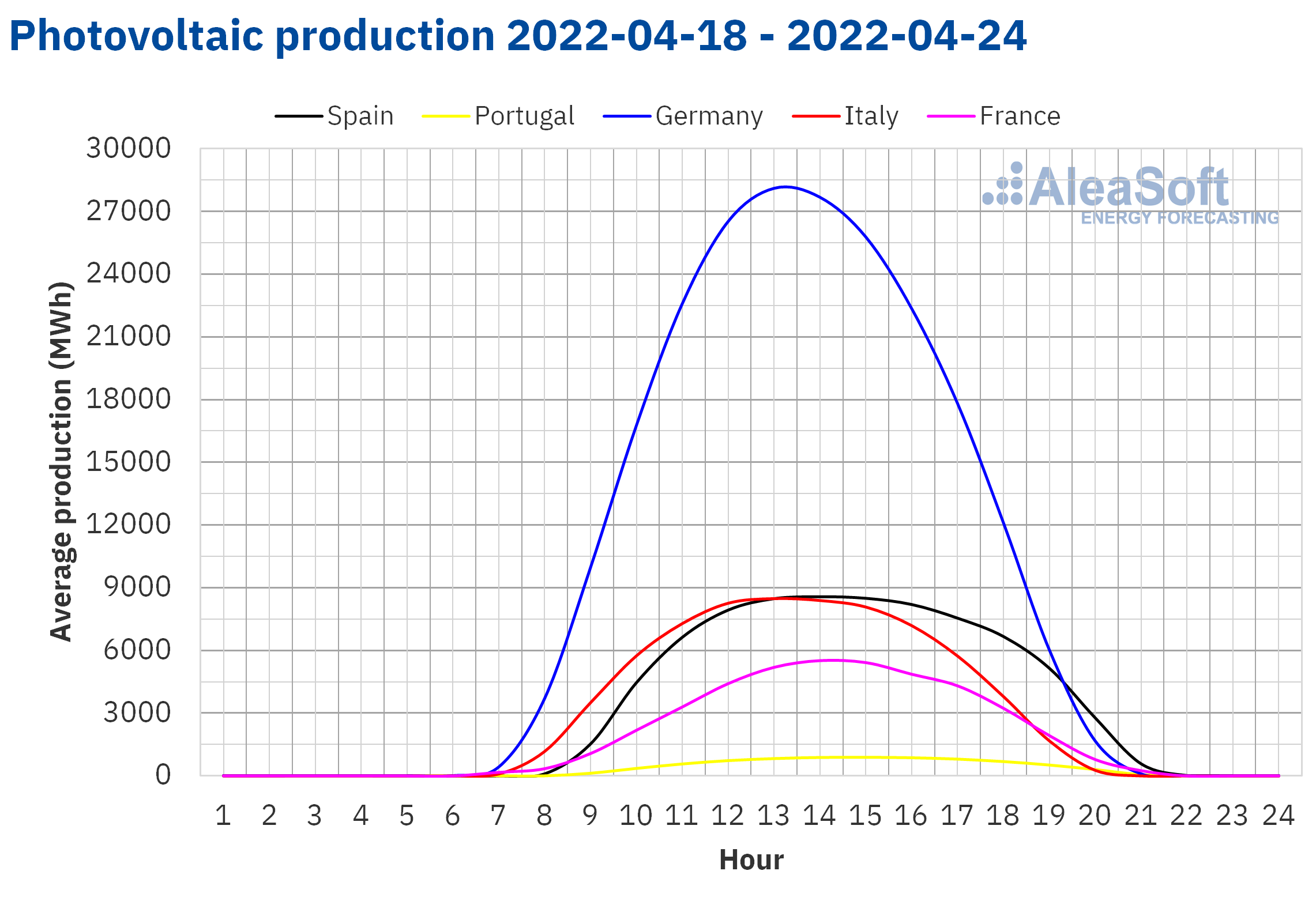 During the week of April 18, the wind energy production increased in most markets analysed at AleaSoft Energy Forecasting compared to the previous week. The largest increase was registered in the Iberian Peninsula, which was 68% higher. In the markets of Germany and Italy the increase was 46% and 36% respectively. The exception was in the French market where the production with this technology fell by 11%.

For the last week of March, the AleaSoft Energy Forecasting’s forecasts indicate a general reduction in wind energy production. 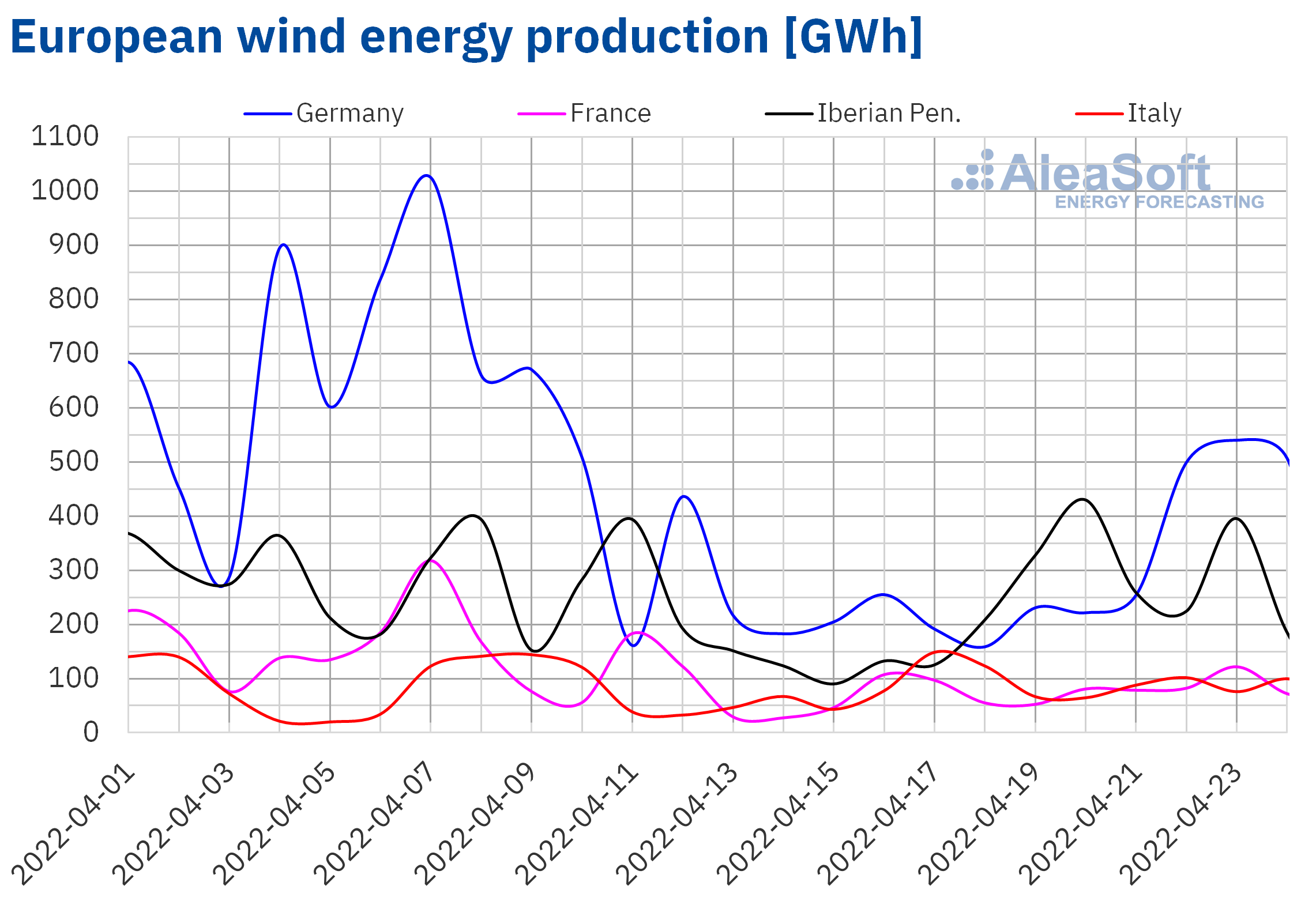 The week of April 18 ended with decreases in electricity demand in most of the analysed European markets compared to the previous week. The declines were between 2.6% and 13% in the markets of Italy, Belgium, France, Great Britain and the Netherlands. In these cases, the decreases were due to the Easter Monday holiday, and in the cases of Italy, Belgium and the Netherlands, the less cold temperatures registered during the week also had an influence. However, in the markets of Germany, Portugal and Spain, the demand increased by 0.1%, 5.4% and 6.7% respectively. 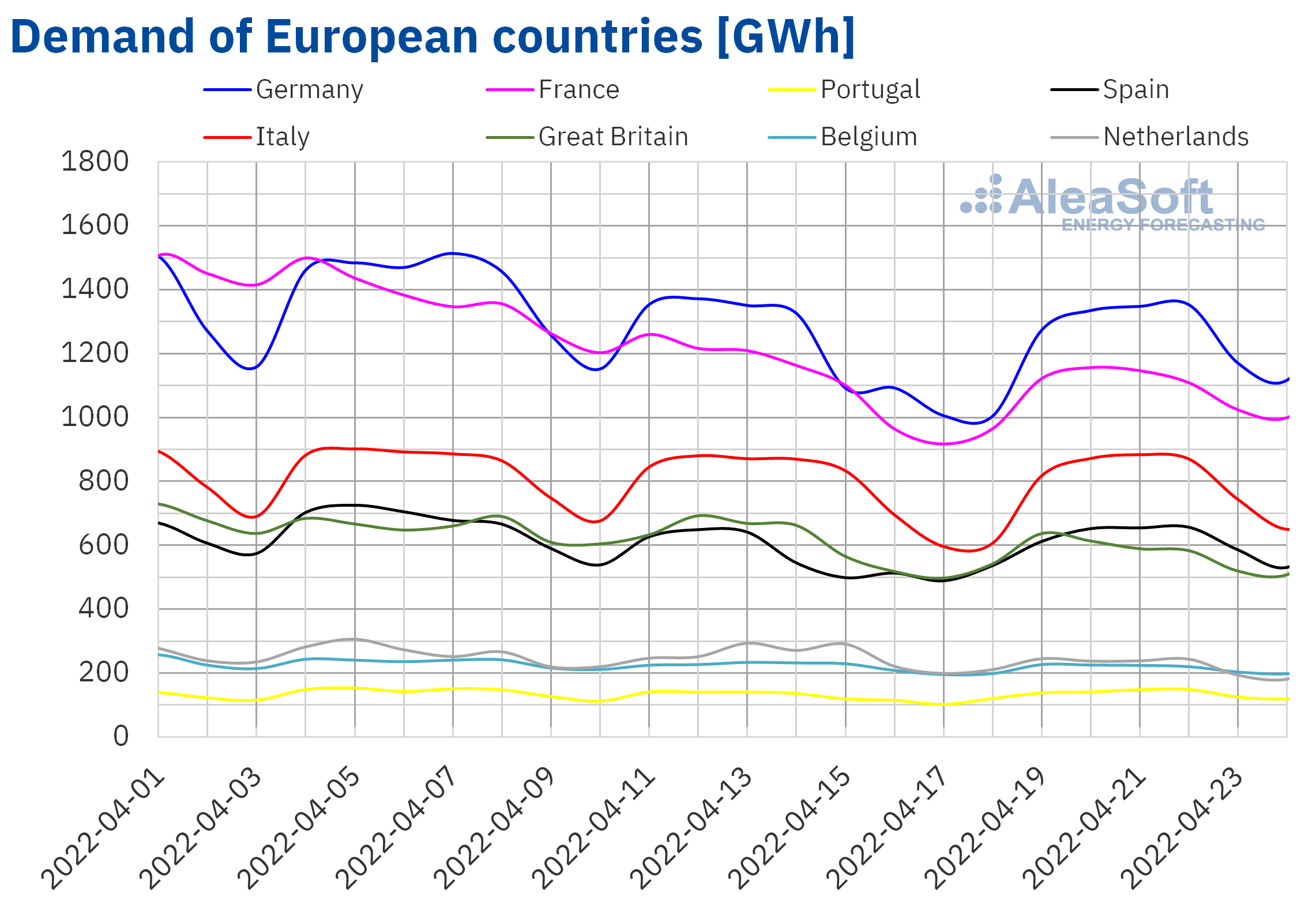 In the week of April 18, the prices of all European electricity markets analysed at AleaSoft Energy Forecasting decreased compared to the previous week. The largest decreases were those of the MIBEL market of Spain and Portugal, of 31% and 32% respectively. On the other hand, the smallest decrease, of 1.1%, was that of the IPEX market of Italy. In the rest of the markets, the price decreases were between 9.1% of the EPEX SPOT market of France and 26% of the Nord Pool market of the Nordic countries.

In the third week of April, the average prices were below €185/MWh in almost all analysed electricity markets. The exception was the Italian market with a weekly average of €227.13/MWh. In the rest of the markets, the prices were between €111.68/MWh of the Nordic market and €181.69/MWh of the French market.

During the week of April 18, the increase in wind energy production and the decrease in demand in most markets favoured the fall in prices in the European electricity markets. In addition, despite the fact that gas prices remain high, they fell slightly compared to the previous week.

The AleaSoft Energy Forecasting’s price forecasting indicates that in the week of April 25 European electricity markets prices might increase influenced by the increase in demand and the decrease in wind energy production. In addition, in the case of the MIBEL market, the fact of starting the week with two Spanish nuclear power plants out of operation may also contribute to the increase in prices. 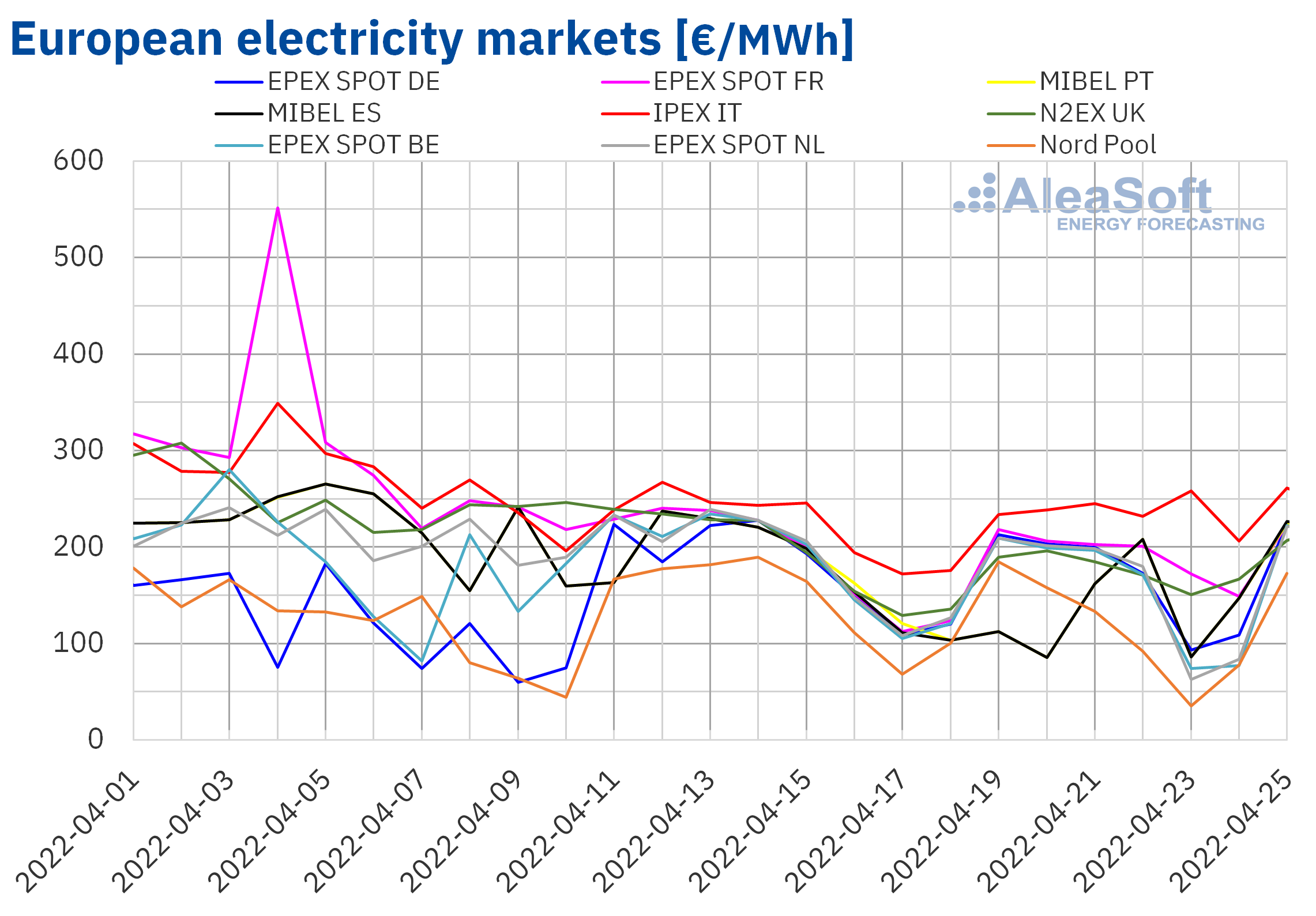 In the third week of April, electricity futures prices for the third quarter of 2022 registered heterogeneous behaviour in the European markets. The EEX market of Germany, France and Italy registered falls between the settlement prices of the sessions of April 14 and 22, with the German market registering the largest variation, with a reduction of 3.4%. Meanwhile, in the Italian market its settlement price hardly changed as the drop was only €0.02/MWh. There were also falls in the ICE market of Belgium and the Netherlands and in the OMIP market of Spain and Portugal. On the other hand, the EEX market of Spain and the United Kingdom, the ICE market of the United Kingdom and the Nordic countries and the NASDAQ market also of the Nordic countries registered increases in their settlement prices, the highest being that of the ICE market of the Nordic countries, with a 1.4% increase between the analysed sessions.

Regarding the settlement prices of electricity futures for the next year 2023, between the sessions of April 14 and 22 there was a general rise in all European electricity markets analysed at AleaSoft Energy Forecasting. The largest increase occurred in the NASDAQ market of the Nordic countries, which together with the ICE market of the same region registered an increase of 11% for this product, although it is closely followed by the increases of the OMIP market of Spain and Portugal, and in absolute terms they exceed it. However, in absolute terms, the largest increase was registered in the EEX market of France, where prices rose by €25.80/MWh.

Brent oil futures for the Front‑Month in the ICE market began the third week of April with a settlement price of $113.16/bbl. This price was 15% higher than that of the same day of the previous week and the highest so far this month. However, most of the week prices fell. As a consequence, the weekly minimum settlement price, of $106.65/bbl, was registered on Friday, April 22. On Monday, April 25, these futures were traded at even lower prices.

The fear of the effects on the demand of the confinements in China due to the situation of the COVID‑19 pandemic favoured the decline in Brent oil futures prices. The concerns about the consequences of the war in Ukraine on the economy and the demand also contributed to lower prices. However, the clashes in Libya are hurting exports from this country. In addition, in the event of a ban on the import of Russian oil by the European Union, prices might skyrocket.

As for the settlement prices of TTF gas futures in the ICE market for the Front‑Month, almost the entire third week of April remained below €100/MWh. The exception was Thursday, April 21, when a settlement price of €100.06/MWh was reached, 4.6% higher than that of the previous Thursday.

Regarding CO2 emission rights futures in the EEX market for the reference contract of December 2022, in the third week of April the settlement prices exceeded €80/t. The maximum settlement price of the week, of €88.99/t, was reached on Friday, April 22. This price was the highest since the end of February. The need to meet the obligations related to 2021 together with speculation favoured the rise in prices. 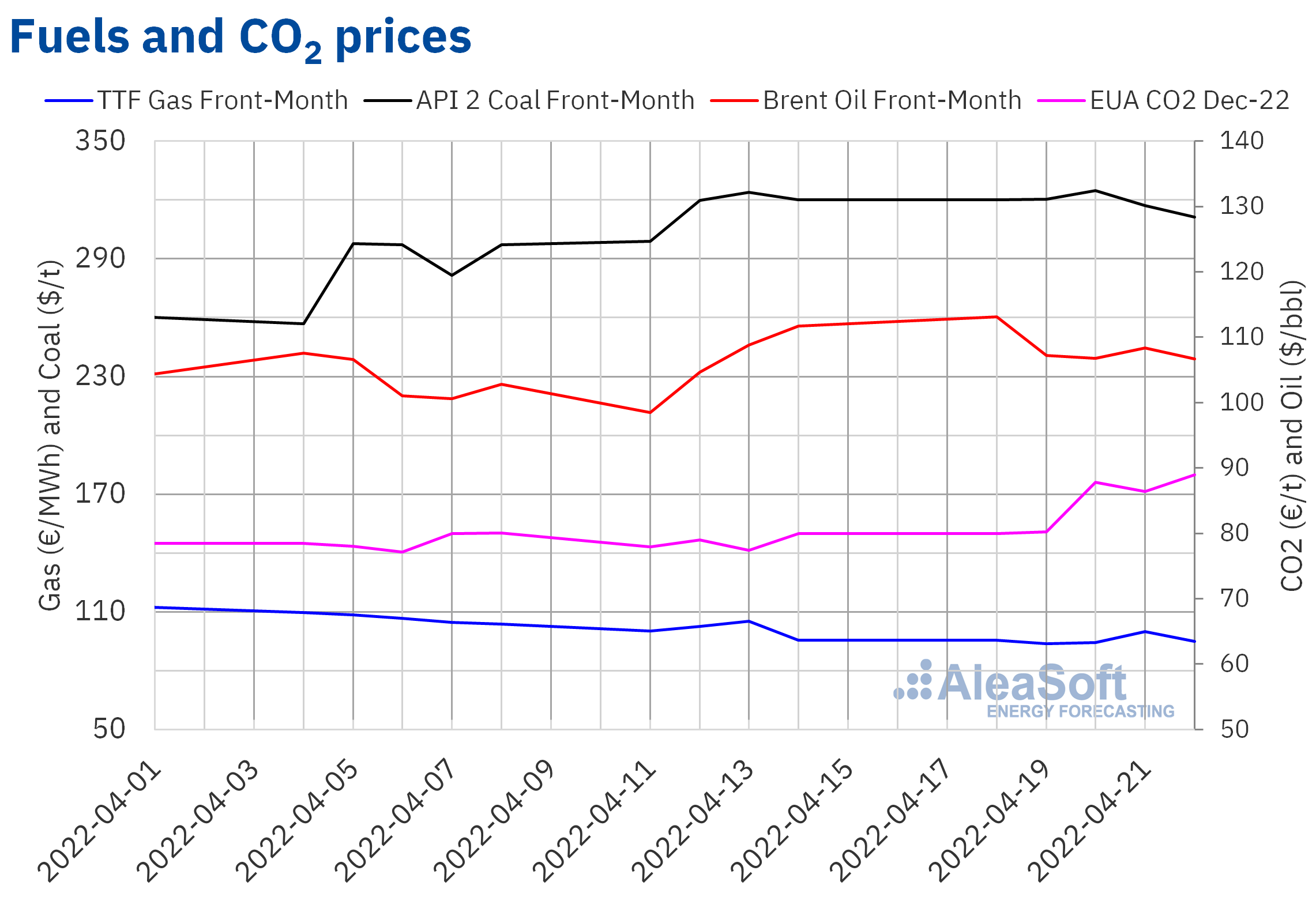 On April 21, the AleaSoft Energy Forecasting’s monthly webinar took place, this time focused on energy storage, in which Miriam Bueno Lorenzo, General Deputy Director of Foresight, Strategy and Regulations in Energy Matters of the Ministry for the Ecological Transition and the Demographic Challenge (MITECO), and Raúl García Posada, Director of the Spanish Association for Energy Storage (ASEALEN) participated. The webinar explained the calls for aids for storage, both open and future, within the framework of PERTE ERHA, which are necessary to develop these technologies, which will be of vital importance to carry out the energy transition. In addition, the analysis of the evolution of the energy markets in recent weeks and their prospects for the following months was carried out. Clients and those interested in the forecasts of AleaSoft Energy Forecasting can request the recording of the webinar at the following link.

The next AleaSoft Energy Forecasting’s webinar will be held on May 12, where the importance of energy markets prices forecasting for renewable energies development will be analysed. At the analysis table of the Spanish version of the webinar, there will be three guests, experts in the energy sector in Spain who have been collaborators of AleaSoft Energy Forecasting for more than 15 years, who will explain some cases of use of forecasts: Alberto Ceña Lázaro, CEO of BEPTE, S.L., Antonio Canoyra Trabado, associate professor at the Department of Electric Power at the Comillas Pontificial University (ICAI), and Francisco Del Río, energy management expert.

During the month of April, AleaGreen, the AleaSoft Energy Forecasting’s division specialised in long‑term price curves forecasting reports, is offering a special promotion of these reports, for all European markets.