The solar energy production increased 18% last week in Italy, compared to the week of October 28. In Spain, where it includes photovoltaic and solar thermal technologies, it increased by 16%. On the other hand, in Germany it was the fifth consecutive week where the generation with this renewable source decreased, the reduction being 30% this time. At AleaSoft it is expected that during this week the solar energy production of Germany will recover, in Spain similar values to those of last week will be maintained and in Italy it will decrease.

From Friday, November 1, to Sunday, November 10, the solar energy production of the Spanish peninsular territory increased by 44% compared to the same period of 2018. A smaller increase than the previous one was registered in Italy, by 14%. In the case of Germany there was a decrease of 16%. 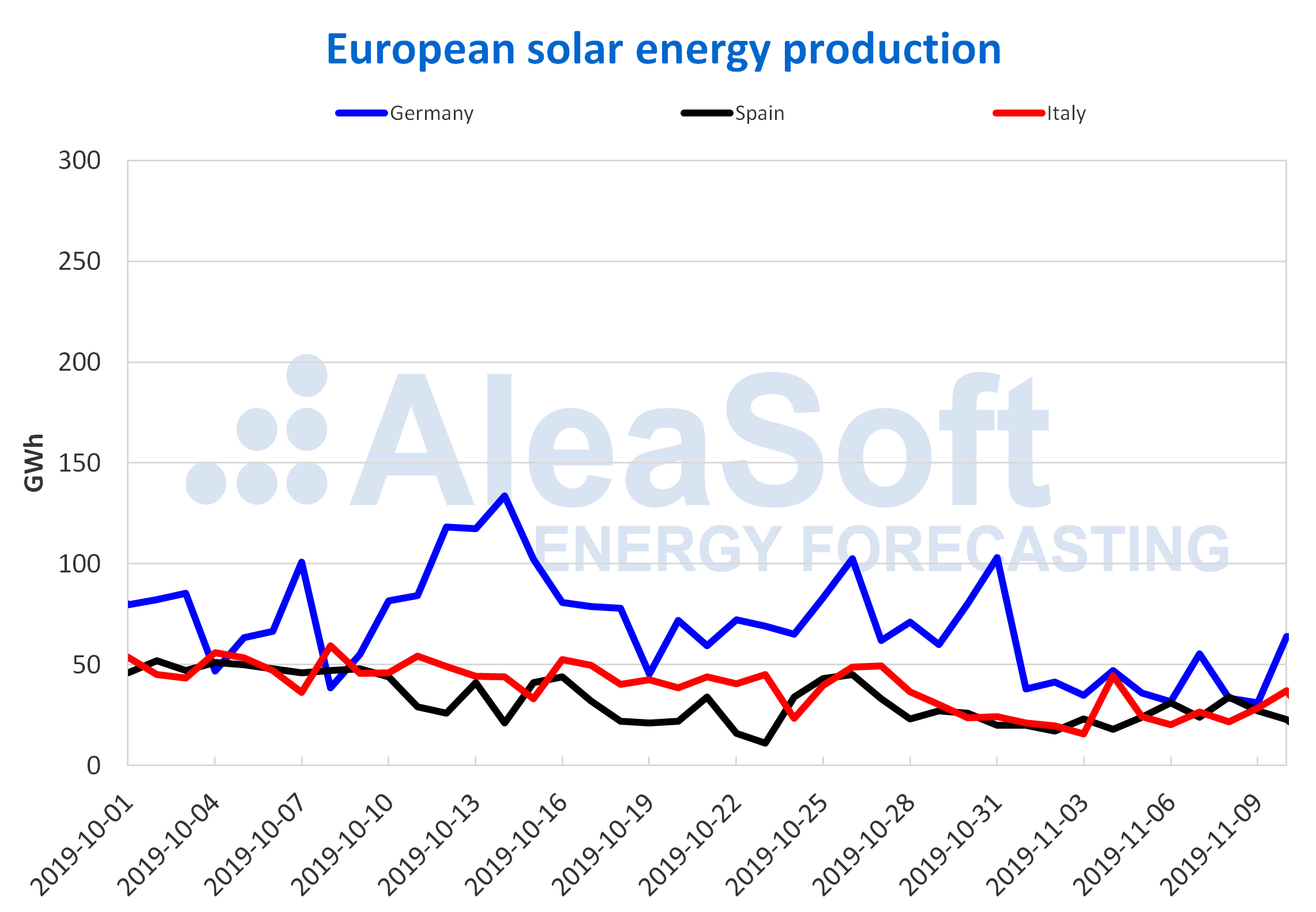 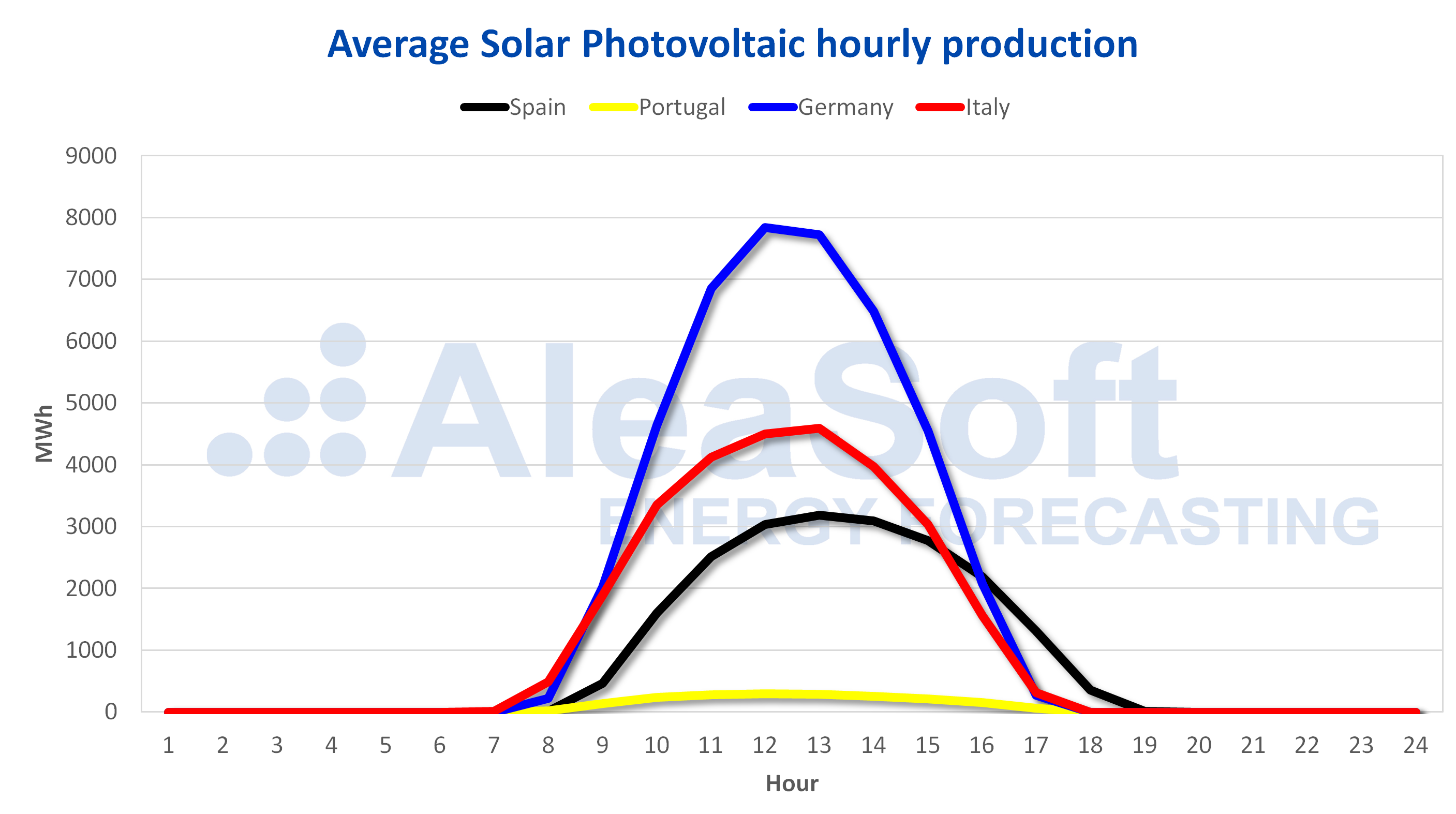 The strong winds of last week allowed the wind energy production in Italy to increase by 112% over the previous week. In the Iberian Peninsula this increase was 52%. Meanwhile, in Germany and France, the production with this renewable source decreased by 31% and 15%, respectively. At AleaSoft, increases compared to the week of November 4 in Germany and descents for both the Iberian Peninsula and France during this week are expected.

In the first 10 days of November 2019, the wind energy production had significant year‑on‑year increases in several European countries. Such is the case of Italy with 132% and Spain with 59%. In the rest of the analysed countries, the ascents were between 14% and 33%. 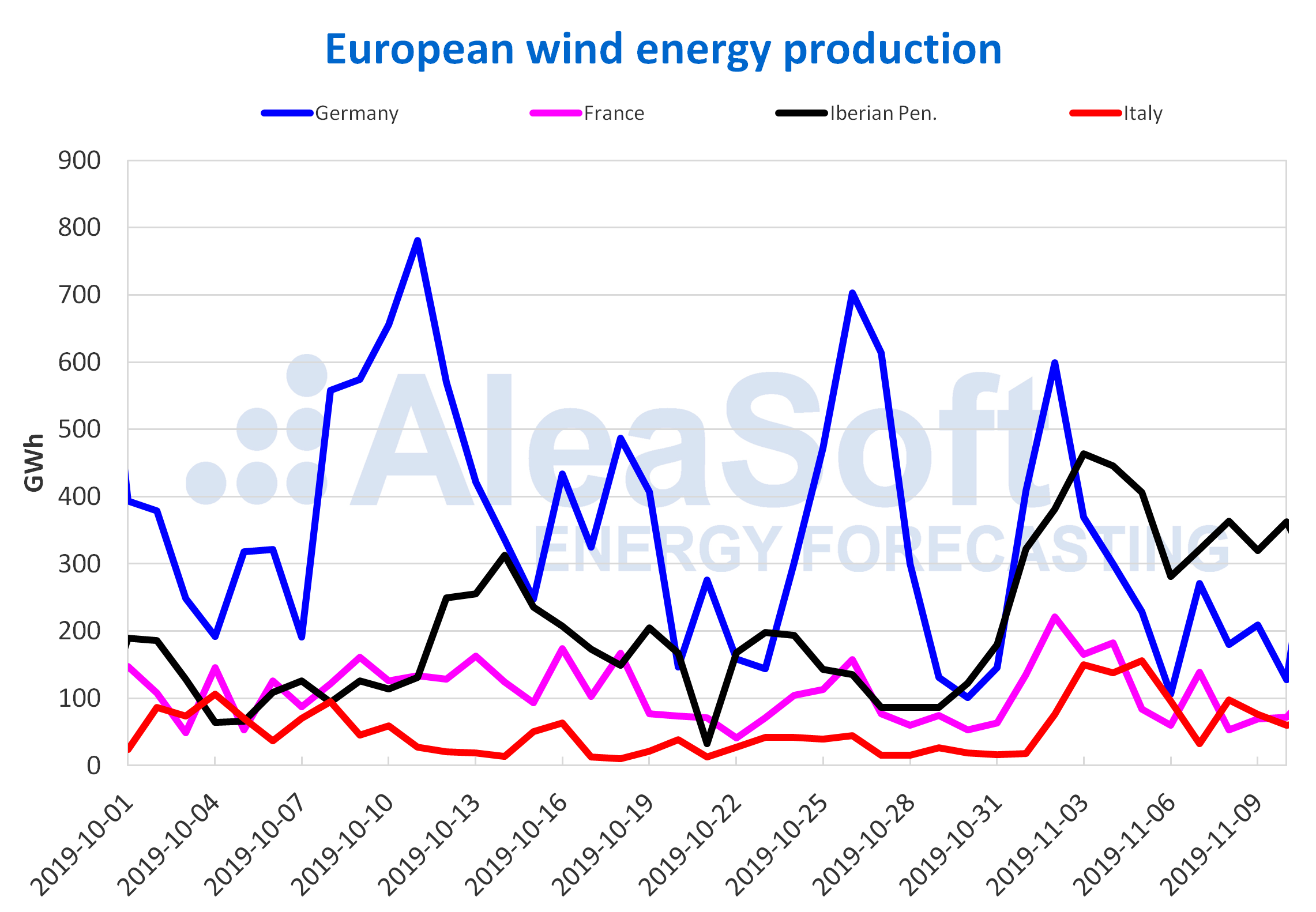 The decrease in the average temperatures in the analysed countries, and the labour effect of the holiday of November 1, celebrated in several countries of the continent, caused an increase in electricity demand in most countries last week, compared to the previous one. In France, the increase was 14%, followed by Spain where it increased by 6.7%, the rest of the countries had increases between 3.5% in Italy and 4.8% in Belgium. Portugal was the exception, where the demand was very similar, being only 0.1% lower than the week of October 28. At AleaSoft it is expected that during this week the electricity demand will increase slightly in several of the analysed countries, as temperatures continue to fall. 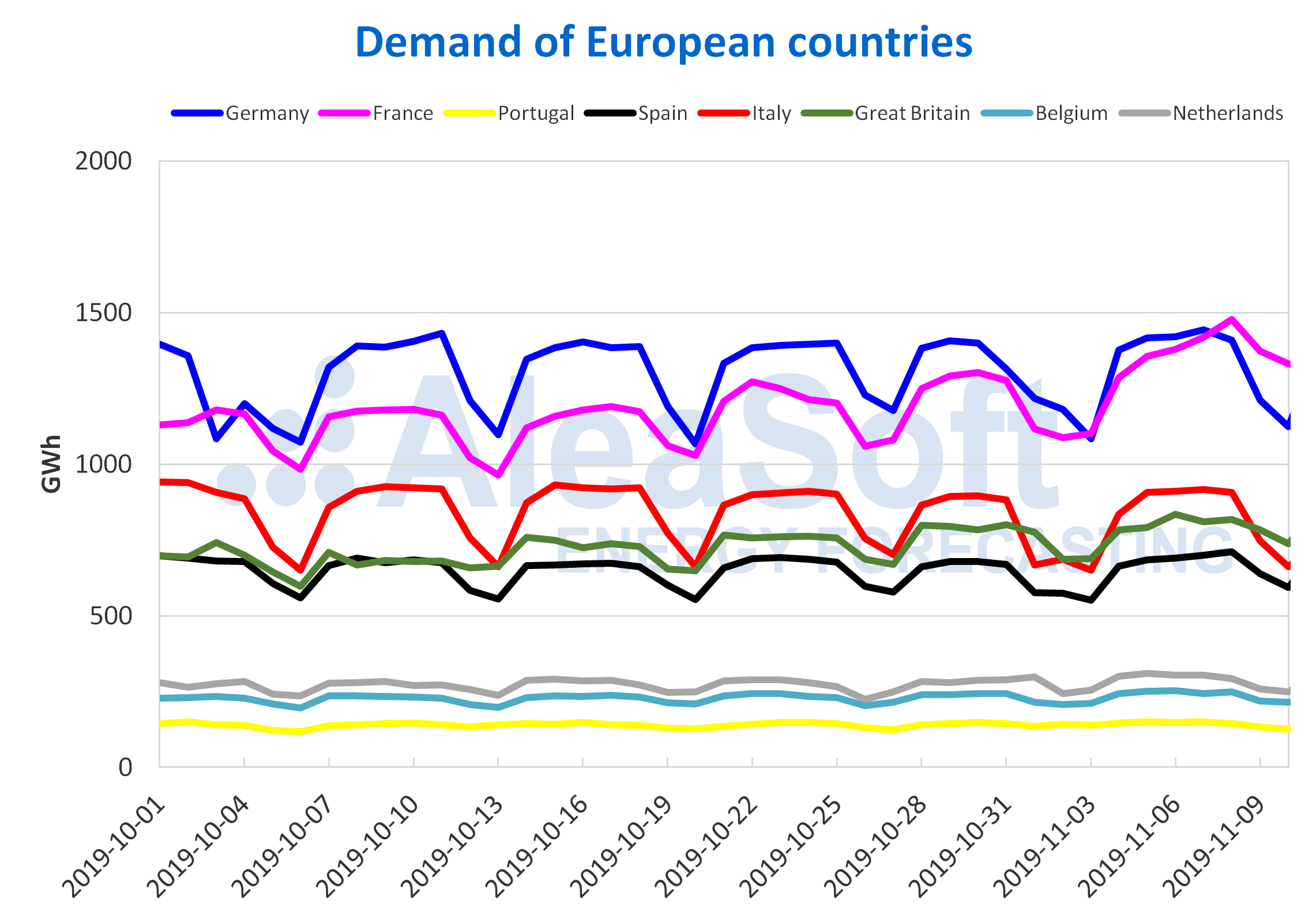 During the past week, the prices of most European electricity markets increased compared to the previous week, with the exception of the MIBEL markets of Spain and Portugal, which registered a 12% decrease due to the high production with renewable energy, mainly wind and solar energy. In the rest of the markets, the increases were between 0.3% of the IPEX market of Italy and 17% of the Nord Pool market of the Nordic countries. These increases are mainly due to the increase in electricity demand caused by lower temperatures.

In the week just ended, the MIBEL markets averaged the lowest prices in Europe, of €36.26/MWh, followed by the EPEX SPOT markets that settled with similar prices, between €43.56/MWh of The Netherlands and €43.80/MWh of France. While the N2EX market of Great Britain, with a weekly average of €49.77/MWh, was the market with the highest prices for most of the week, except for Thursday, November 7, when it was cleared by the Nord Pool market, which that day reached a daily average price of €47.58/MWh, €0.38/MWh above the British market. This Nord Pool market was the second with the highest prices of last week, with a weekly average of €45.41/MWh, something very unusual in this market that is often the one with the lowest prices in Europe. In third position was the IPEX market, which despite the high production with wind and solar energy, had a slight increase of €0.12/ MWh, closing the week with an average of €44.07/MWh.

This Monday, November 11, the N2EX market settled at €48.08/MWh and continues to be the market with the highest price, followed by the Italian IPEX market, which settled at €47.03/MWh. The rest of the analysed European markets settled with prices from €44.74/MWh of the MIBEL market to €41.11/MWh of the German EPEX SPOT market. 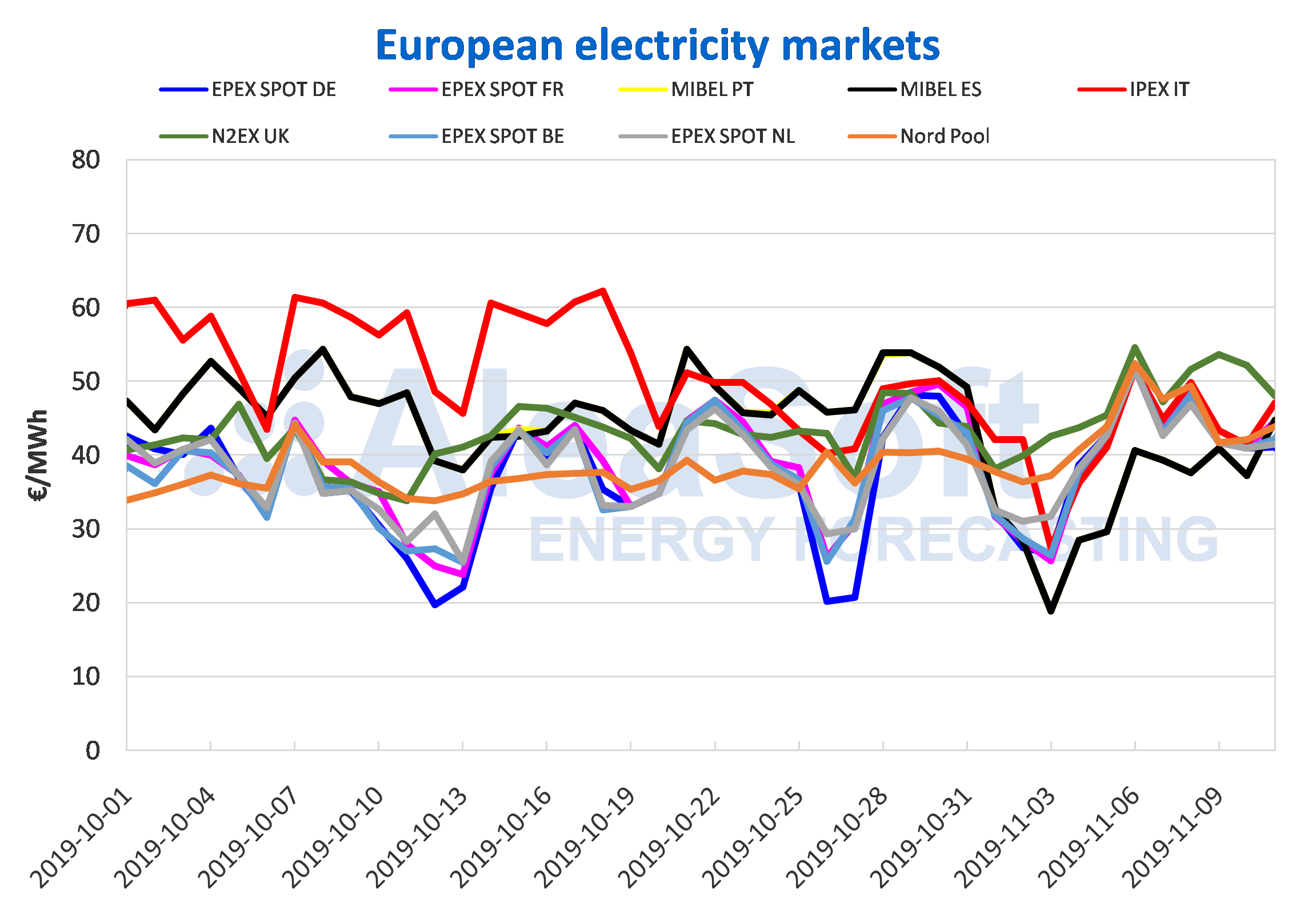 The electricity futures markets prices for the product of the next quarter were downward in most European electricity markets analysed by AleaSoft. Again, only the futures of the Nordic countries, both in the ICE market and in the NASDAQ market have a different behaviour, with increases of 3.2% in both cases. For the rest of the markets, the registered declines are between 2.1% of the ICE market, both for the United Kingdom and the Netherlands and 4.0%, corresponding to the OMIP market of Spain and Portugal.

As for the electricity futures for the year 2020 the behaviour is very similar. Only the Nordic countries increased their price, 3.8% in the ICE market and 3.7% in the NASDAQ market. Also in this case the largest decrease was in the OMIP market, both for Spain and Portugal, with 1.8%. On the other hand, the smallest change was in the EEX market of Italy, with a drop of 0.9%.

The Brent oil futures prices for the month of January 2020 in the ICE market, after the 1.9% decrease occurred on Wednesday, November 6, the last days of last week recovered the upward trend with which they began the month of November. On Thursday, November 7, the price increased 0.9% compared to Wednesday. On Friday the increase was 0.4% compared to the previous day, reaching a value of $62.51/bbl. This price is the second highest of the week and so far this month, after the $62.96/bbl of Tuesday, November 5. In the coming days, prices could fall again influenced by the development of the trade conflict between China and the United States and because there are currently no signs that the OPEC+ members will increase the production cuts during the meeting scheduled for December.

The TTF gas futures prices in the ICE market for the month of December, the last days of last week continued with the downward trend that began on Wednesday, November 6. On Thursday and Friday of last week there were daily decreases of 1.0% and 1.1% respectively. As a result, the settlement price on Friday, November 8, was €15.94/MWh.

The API 2 coal futures prices in the ICE market for the month of December on Thursday, November 7, showed a certain recovery, with an increase of 0.4% over the previous day. But on Friday, November 8, they fell again 1.4%, reaching a settlement price of $57.10/t. The price increases of some days of last week did not compensate for the decreases and the price on Friday was 2.7% lower than the previous Friday. On the other hand, the restrictions on the importation of coal of the Chinese government could contribute to lower prices in the remainder of the year.

The CO2 emission rights futures prices in the EEX market for the reference contract of December 2019, after a 2.9% decrease on Wednesday, November 6, the last days of last week remained stable, with variations below €0.20/t. The prices ranged between €24.79/t on Wednesday and €24.94/t on Thursday. The settlement price of Friday, November 8, was €24.84/t. This price stability is related to the postponement of Brexit. 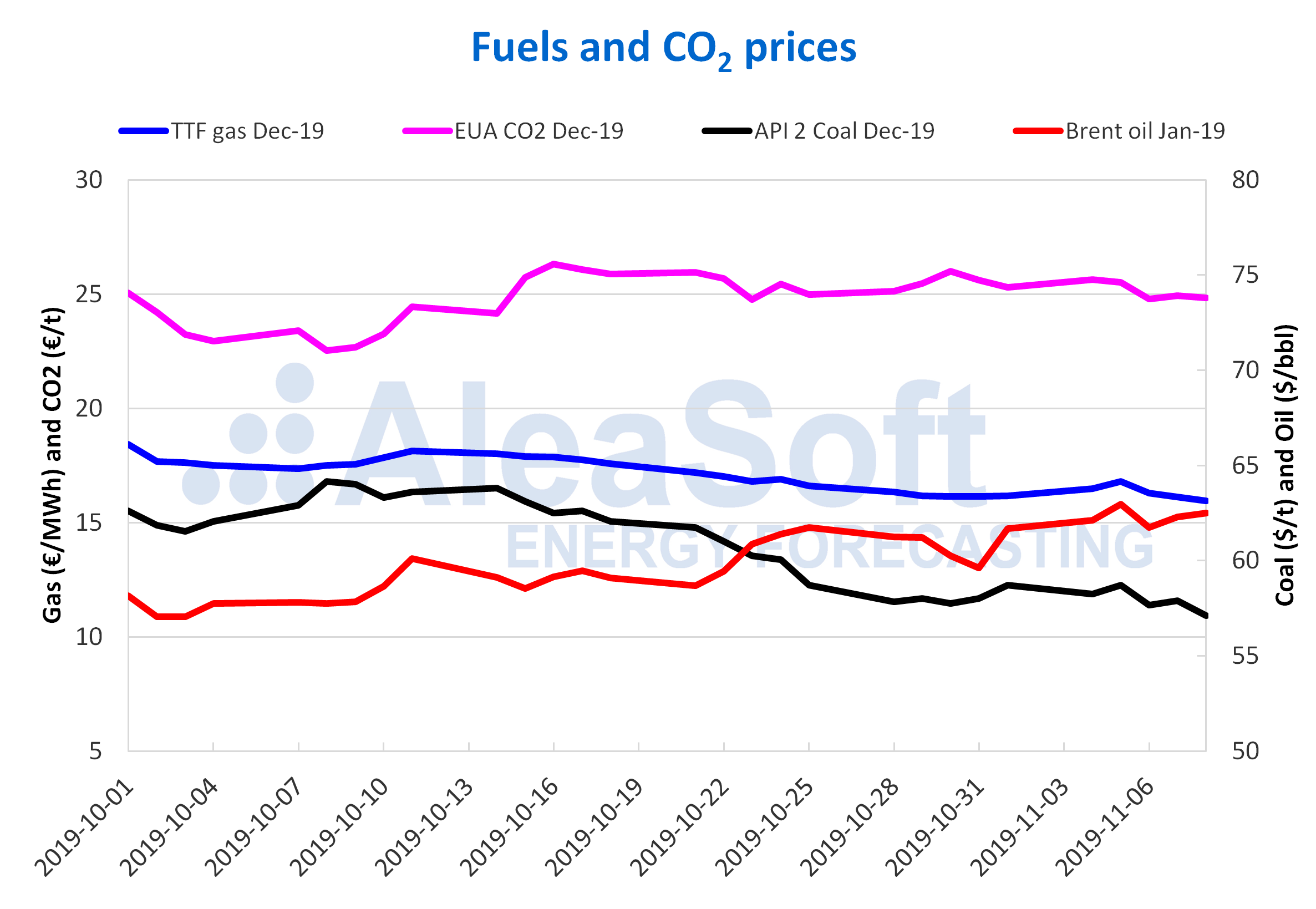