AleaSoft, November 7, 2019. This week, the renewable energies in Europe have reasons to celebrate. The solar and wind energy production increased in the main European electricity markets, which led to the decline in prices in much of the continent. Special attention deserves the Iberian market that from Sunday to Thursday dropped to €31.38/MWh on average, with the price of Sunday 3 being the lowest of the year so far. With these values, the Iberian market was the one with the lowest daily average price in Europe in this period. 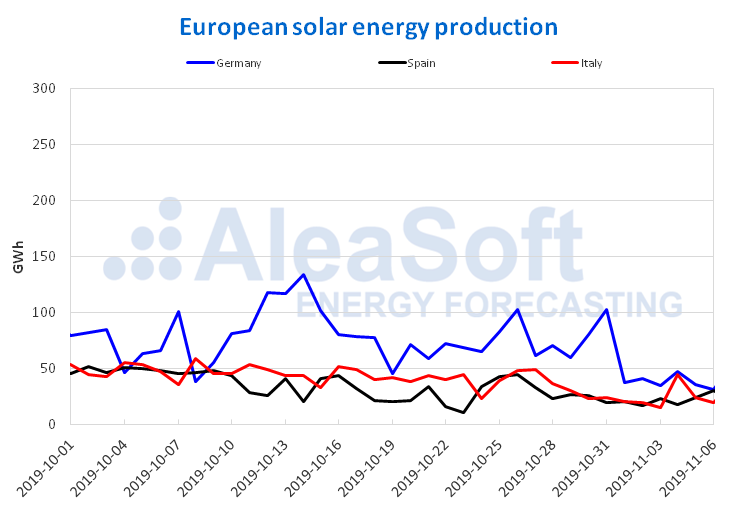 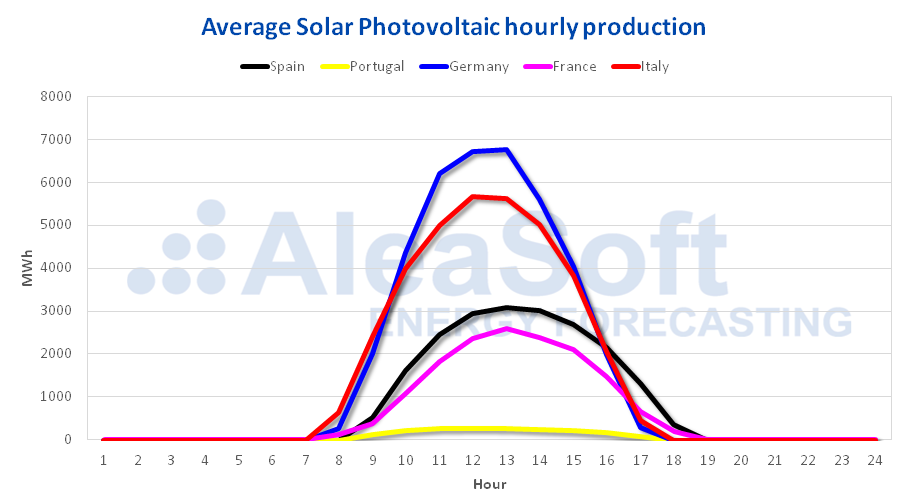 Regarding the wind energy production, it behaved increasingly during the first three days of this week in most of the European countries analysed, compared to the average values of last week. In Italy it was close to tripling the average of the week of October 28, with an average of 104 GWh that exceeded the weekly average level since 2018. The increase in generation with this renewable source in the Iberian Peninsula was 58%, while in Germany and France there were declines of 28% and 1.4% respectively.

The increases in the wind energy production in the days since the beginning of November were between 46% in the case of Germany and 112% in Italy, compared to the same period of 2018. In general, there were increases in production in all the examined countries, among which France and Spain also stand out, with variations of 99% and 96% respectively. 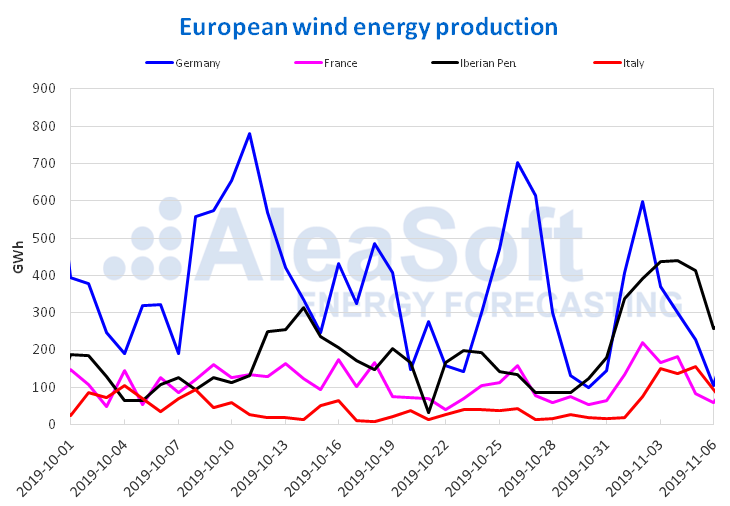 The lowering of average temperatures in several countries led to increases in electricity demand in much of the analysed European territories. For the cases of France, Portugal and Spain, the increases were 4.6%, 1.8% and 1.0% respectively. According to AleaSoft‘s analysis, increases in electricity demand in several countries are expected next week due to possible temperature decreases. 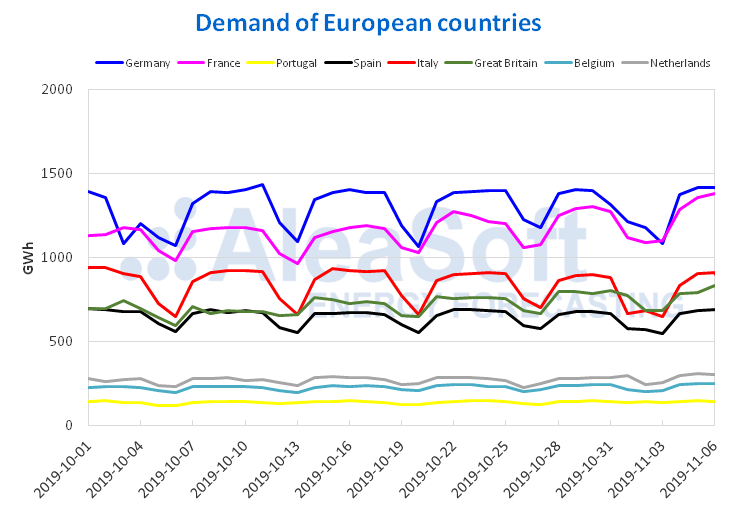 Spain is one of the European countries where the production with renewable energy increased so far this week compared to the average level of last week. Such is the case of the solar energy production, which includes photovoltaic and solar thermal, which rose 8.5%, and of the wind energy production that had an increase of 61%.

The variation in electricity demand in Mainland Spain so far this week was 1.0% compared to the same period last week. One of the factors that caused this increase was the decrease in temperatures.

Due to the current shutdowns of two of the nuclear power plants in Spain, the average nuclear energy production of the first 3 days of the week was 11% below the average values of last week. 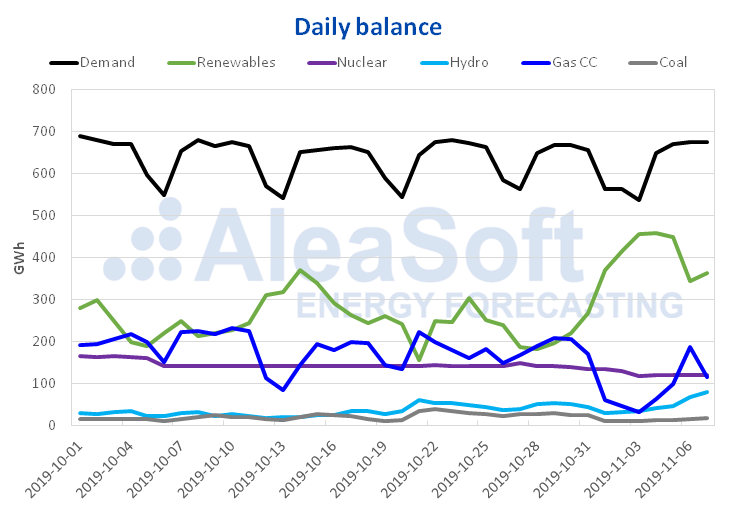 According to data from the latest Hydrological Bulletin of the Ministry for Ecological Transition, the current level of the hydroelectric reserves is 7905 GWh. This accumulated represents an increase of 0.8% compared to last bulletin and 34% of the total capacity.

The average price of most European electricity markets so far this week fell compared to the same period last week, with the exceptions of the Nord Pool market of the Nordic countries and the N2EX market of Great Britain, which had increases of 15% and 3.3% respectively. The rest of the countries showed decreases between 1.2% of the EPEX SPOT market of the Netherlands and 34% of the MIBEL market of Spain and Portugal. The high wind energy production in much of Europe during the first three days of this week led to this downward trend in electricity prices despite a higher demand. Italy was the only country where the demand declined in the face of a very slight increase in temperatures, which together with high wind energy production allowed prices to fall by 11% in the IPEX market.

This week most of the markets were very coupled with average values around €44/MWh. The usual distribution of the markets in two groups according to their price this week was not fulfilled. In fact, the MIBEL market, which is normally in the group of markets with higher prices, and that last week was the one with the highest price in Europe a large part of the days, this week was the market with the lowest price in the continent. In the highest position in terms of prices is the N2EX market, usually in this group, with an average price of €47.78/MWh. It is followed by the Nord Pool market, usually in the group with the lowest prices, with an average price of €46.15/MWh. 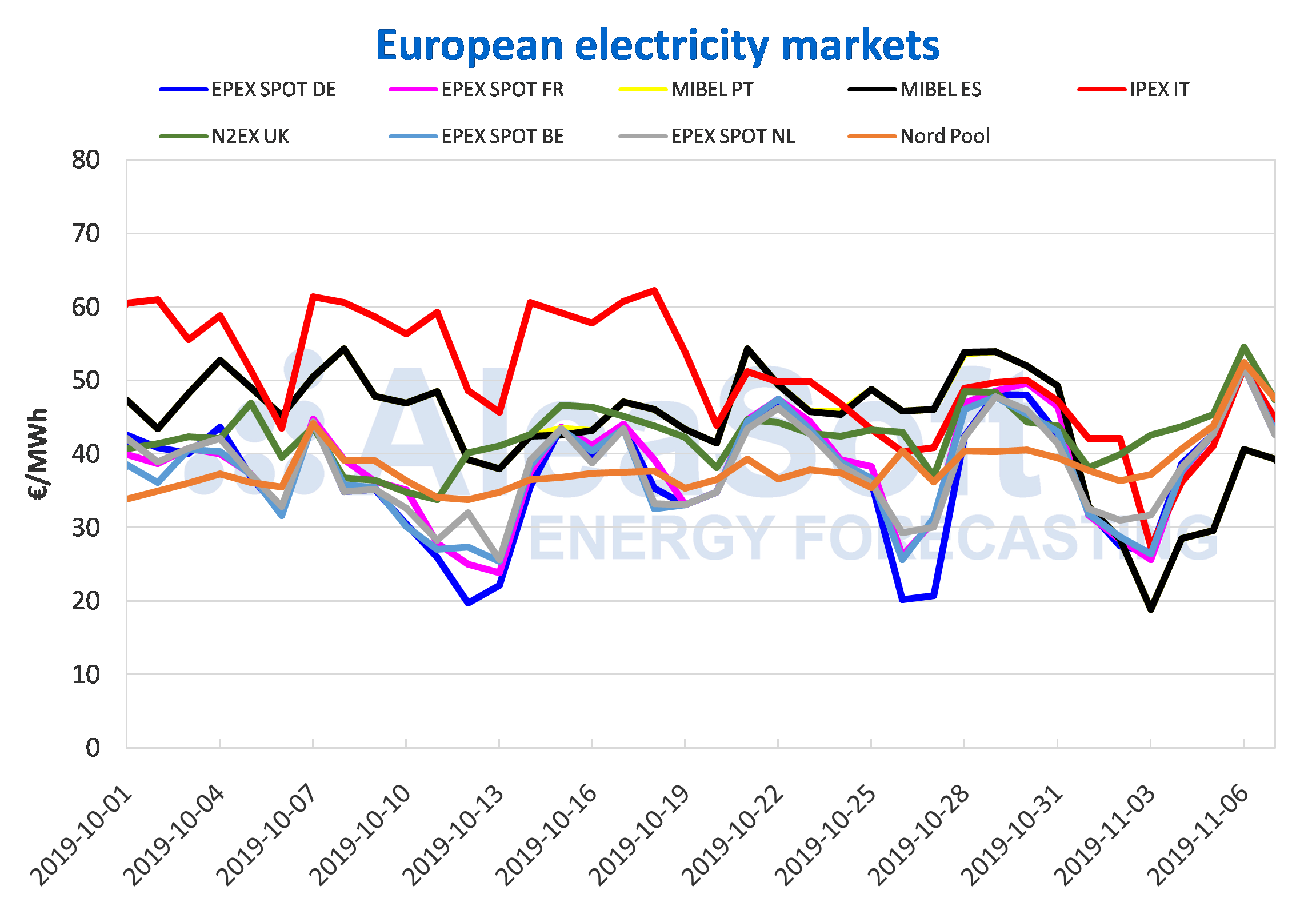 The average price of the first four days of this week in the MIBEL market was €34.51/MWh, both for Spain and Portugal. With a decline of 34%, these markets were €8.95/MWh below the Italian market, the second with the lowest average price. These decreases occur as a continuation of the record price of Sunday, November 3, when the lowest daily average price of this year, of €18.88/MWh, was reached.

The electricity futures for the next quarter started November with declines in almost all the analysed European markets. The exceptions were the ICE and NASDAQ markets of the Nordic countries, where increases of 3.3% and 3.6% respectively were recorded. The decreases in the rest of the analysed markets were between the 0.1% of the ICE market of the Netherlands and the 2.4% of the OMIP markets of Spain and Portugal.

The Brent oil futures prices for the month of January in the ICE market began November with an upward trend. This behaviour allowed a settlement price of $62.96/bbl to be reached on Tuesday, November 5, which is the highest since September 16, when a value of $66.55/bbl was reached as a result of the attacks suffered in two oil facilities in Saudi Arabia, which caused the reduction of the production in this country by more than a half. Subsequently, on Wednesday, November 6, the prices fell by 1.9%, remaining at $61.74/bbl. This decline is related to the fact that the US oil reserves increased above the expected last week. On the other hand, the delay until December of the meeting to discuss a possible trade agreement between China and the United States, and the uncertainty about whether it will finally be agreed to keep the production cuts at the OPEC+ meeting in December, could lead to a fall in prices in the month of November.

The TTF gas futures prices in the ICE market for the month of December began this month with an upward trend and the first days of this week reached higher values than those recorded on the same days of last week. The day of greatest difference with respect to the same day of the previous week, of 3.8%, was Tuesday, November 5, when the maximum value of the week was reached, of €16.79/MWh. The price trend changed on Wednesday, November 6, when the price fell by 3.0% compared to Tuesday, settling at €16.28/MWh.

The increase in the wind energy production in Europe along with the high levels of the gas reserves and the excess of supply could slow the rise in prices of TTF gas futures despite the expected temperature drops for the coming weeks.

The CO2 emission rights futures in the EEX market for the December 2019 reference contract, started this week with a price of €25.64/t, a value of €0.34/t above the settlement price of Friday, November 1. However, during this week the prices fell every day until reaching a settlement price of €24.79/t, on Wednesday, November 6. Although the fears about an exit without agreement of the UK from the European Union seem to dissipate at the moment, the global economic slowdown could be beginning to influence the CO2 emission rights futures prices. 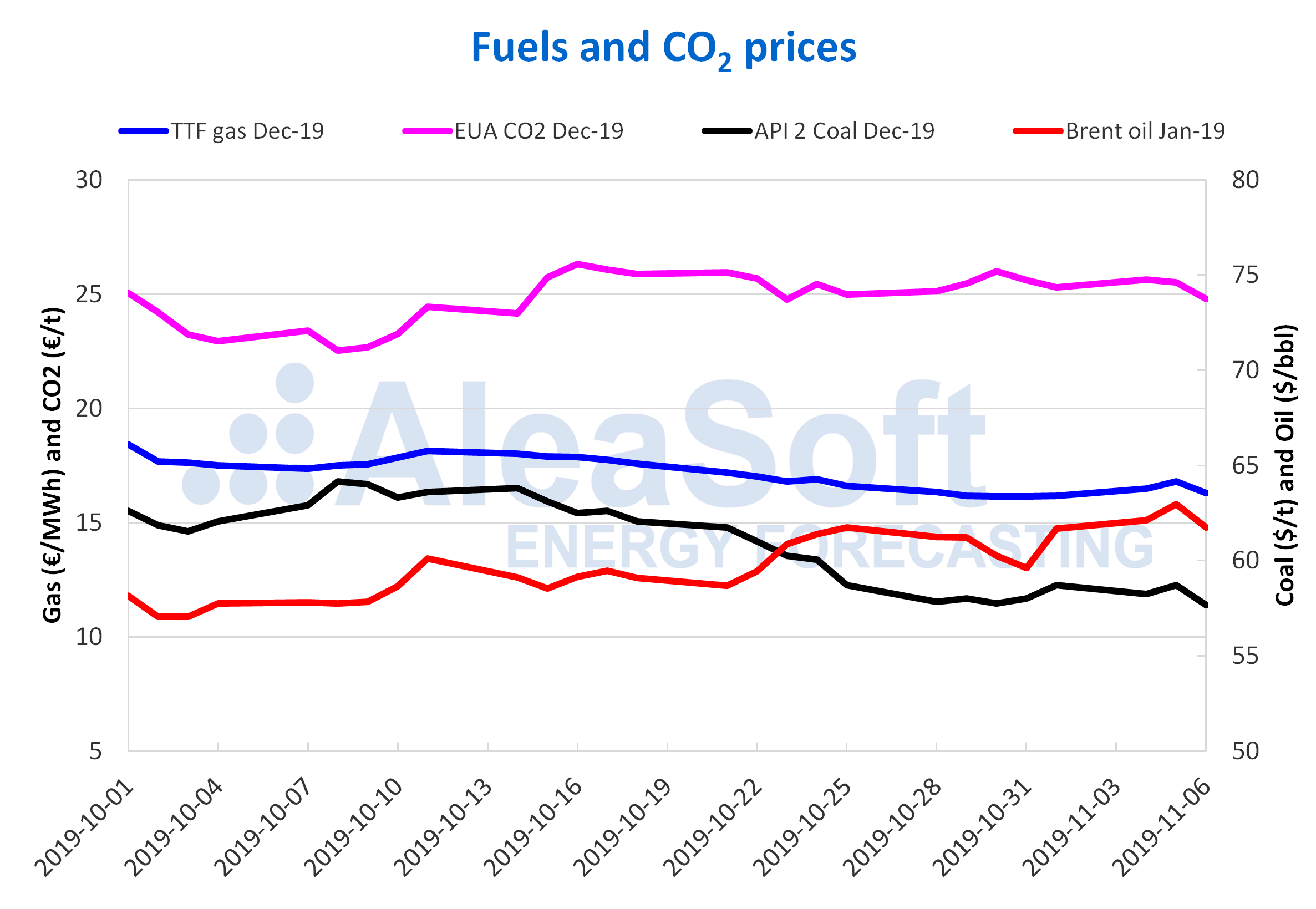