AleaSoft, June 17, 2019. AleaSoft analyses the prices in the fuels markets, CO2 emission rights, European electricity markets and renewable energy production during the last week of June 10 in which the prices of electricity markets in Europe rose compared to the previous week, due to lower renewable energy production, specifically wind and solar energy.

The prices of Brent oil futures for the month of August in the ICE market maintained a downward trend since the end of May and, by the middle of last week, this trend was affected after news of the attack against two tankers in the Gulf of Oman, near the Strait of Hormuz. On Friday, June 14, they settled at 62.01 $/bbl, after falling on Wednesday, June 12, to 59.97 $/bbl, which represented an increase of 3.4%. This market has been heavily influenced by US sanctions on Iran and Venezuela, along with cuts in OPEC production, which put pressure on the prices on the supply side. Meanwhile, the concerns related to demand and global economic growth as a result of trade tensions between the United States and China, as well as the increase in crude reserves in the United States, are pushing prices down.

The TTF gas futures in the ICE market for the month of July continued with a downward trend and settled last Friday June 14 at 11.32 €/MWh.

The prices of API 2 coal futures in the ICE market for the month of July 2019 increased at the beginning of last week to 55.50 $/t on Monday, June 10, but continued the downward trend and settled on Friday, June 14, at 51.25 $/t, the lowest value in the last two years. This market has been influenced by the more competitive gas prices and the excess of global supply. 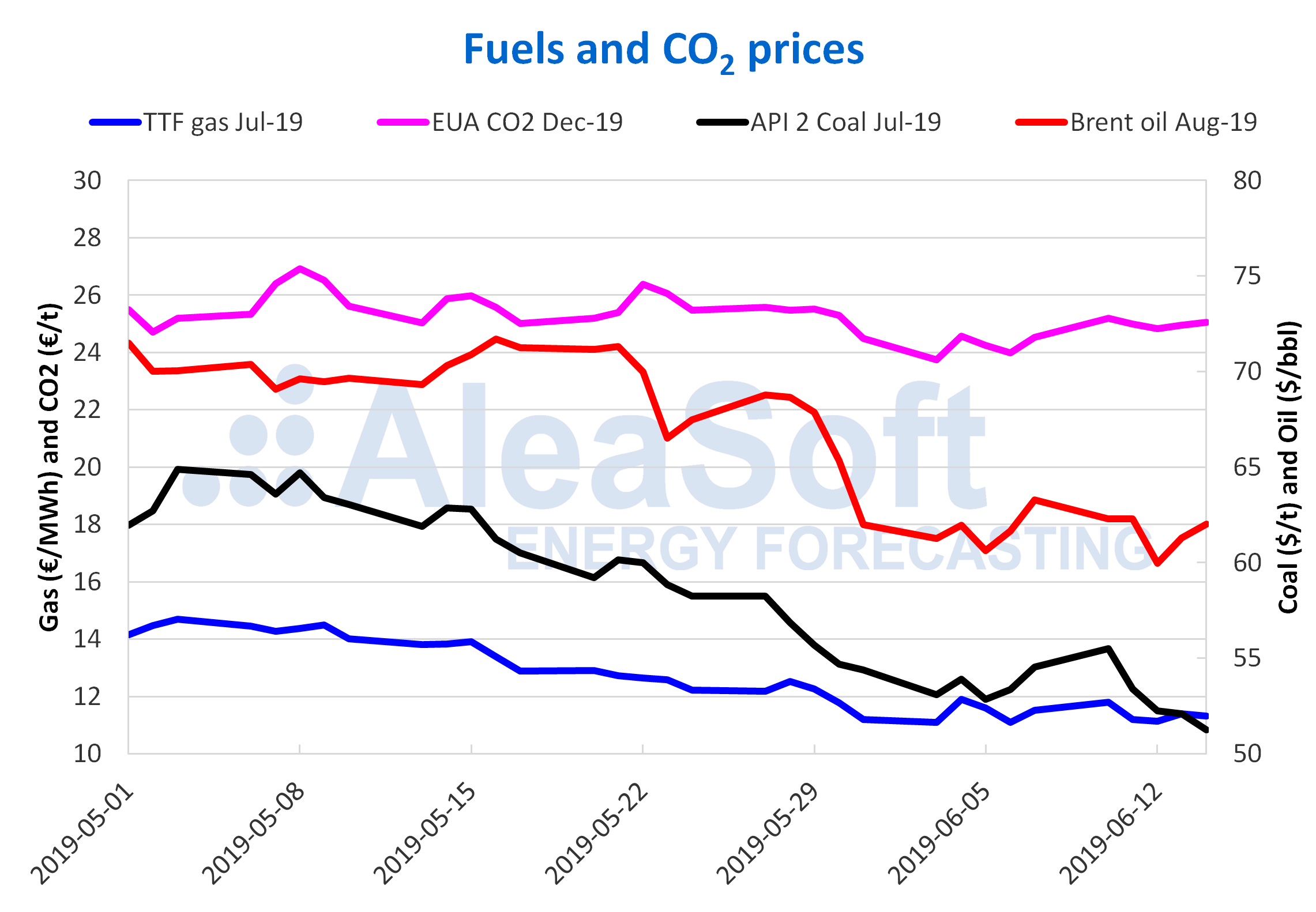 Sources: Prepared by AleaSoft with data from ICE and EEX.

Last week of June 10, the average price of most European electricity markets increased compared to the week of June 3. The biggest increase was in the EPEX SPOT market of Belgium, with 278%, due to the fact that the average price of this market on Saturday, June 8, was -133.56 €/MWh. It is worth remembering that on June 7, when prices for June 8 were traded, a technical problem occurred that caused some European electricity markets to uncouple and that local auctions be resorted to make the matching process. The only markets where prices fell last week were the MIBEL market of Portugal, with a slight decrease of 0.1% and the N2EX market of Great Britain, which fell by 4.8%, although in the latter case it also has a strong influence in the average price of June 8, of 75.39 €/MWh, the highest in Europe that day. If the prices of June 8 are not taken into account in the analysis, last week the prices of all the European markets increased compared to the previous week, with the German market of EPEX SPOT the one with the highest increase, of 9.9%. According to the analysis carried out by AleaSoft, the decrease in renewable energy production, specifically wind and solar energy, is the main cause of the increase in prices.

The European markets continue to be divided into two groups, according to their price. In the group of markets with the highest prices, last week between 45 €/MWh and 50 €/MWh, are Italy’s IPEX market, which had the highest price for most of the week, the MIBEL market of Spain and Portugal, which had the highest price in the last three days, from June 15 to 17, and the British N2EX market. In the group of markets with lower prices, in a range between 30 €/MWh and 40 €/MWh during the past week, are the EPEX SPOT markets of Germany, France, Belgium and the Netherlands, and the Nord Pool market of the Nordic countries, which had most of the week the lowest price in Europe.

The prices of European electricity futures for the third quarter of 2019 settled last week on Friday, June 14, with a drop compared to the session on Friday, June 7, in most markets, except the EEX market of Spain and the OMIP markets of Spain and Portugal that remained practically unchanged. The markets of the Nordic countries in ICE and NASDAQ stand out, for which the decrease was close to 4.5%. The EEX markets of France and Italy as well as the ICE market of Belgium settled about 2.0% lower than the previous week. For the rest of the markets, the drop was between 0.1% and 0.9%.

In the case of European electricity futures for the year 2020, those of the UK stand out in the ICE and EEX markets and those of the Nordic countries in the ICE and NASDAQ markets, which fell by close to 1.0%. The rest of the markets decreased between 0.1% and 0.4%, except for the OMIP markets of Spain and Portugal as well as the EEX market of Italy, which settled at a price 0.1% higher than the previous week. 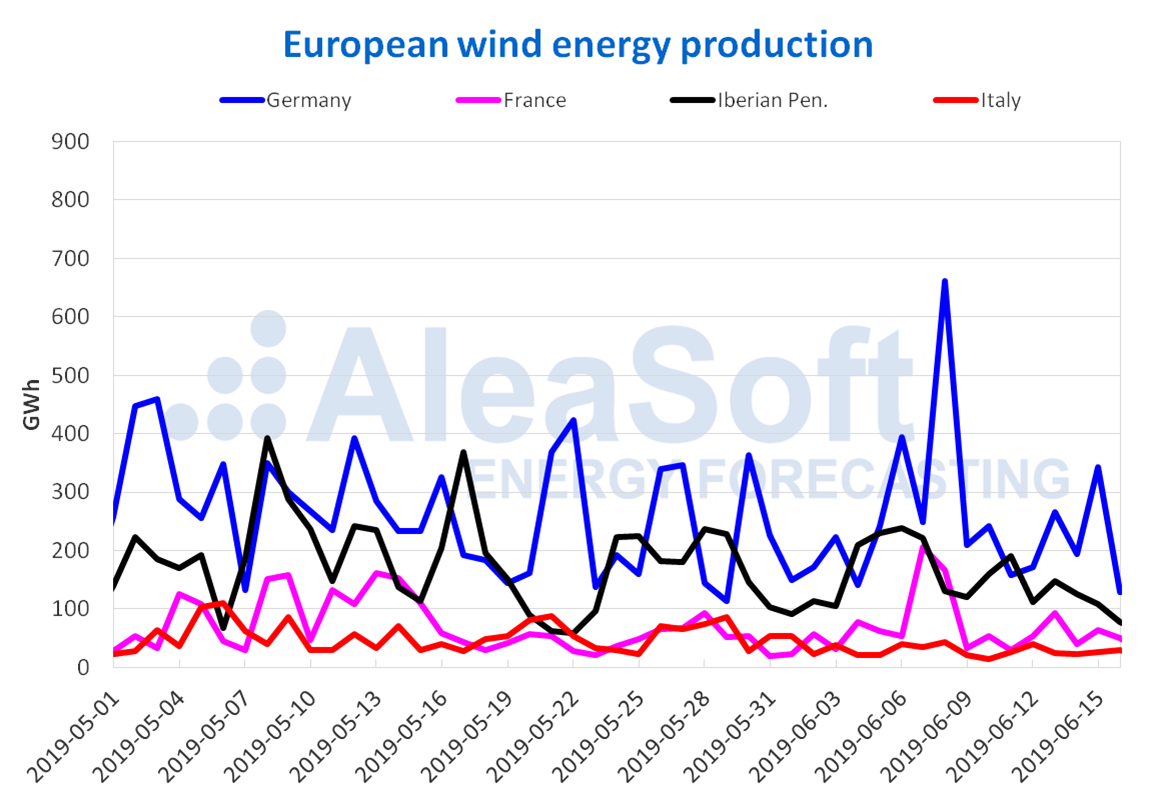 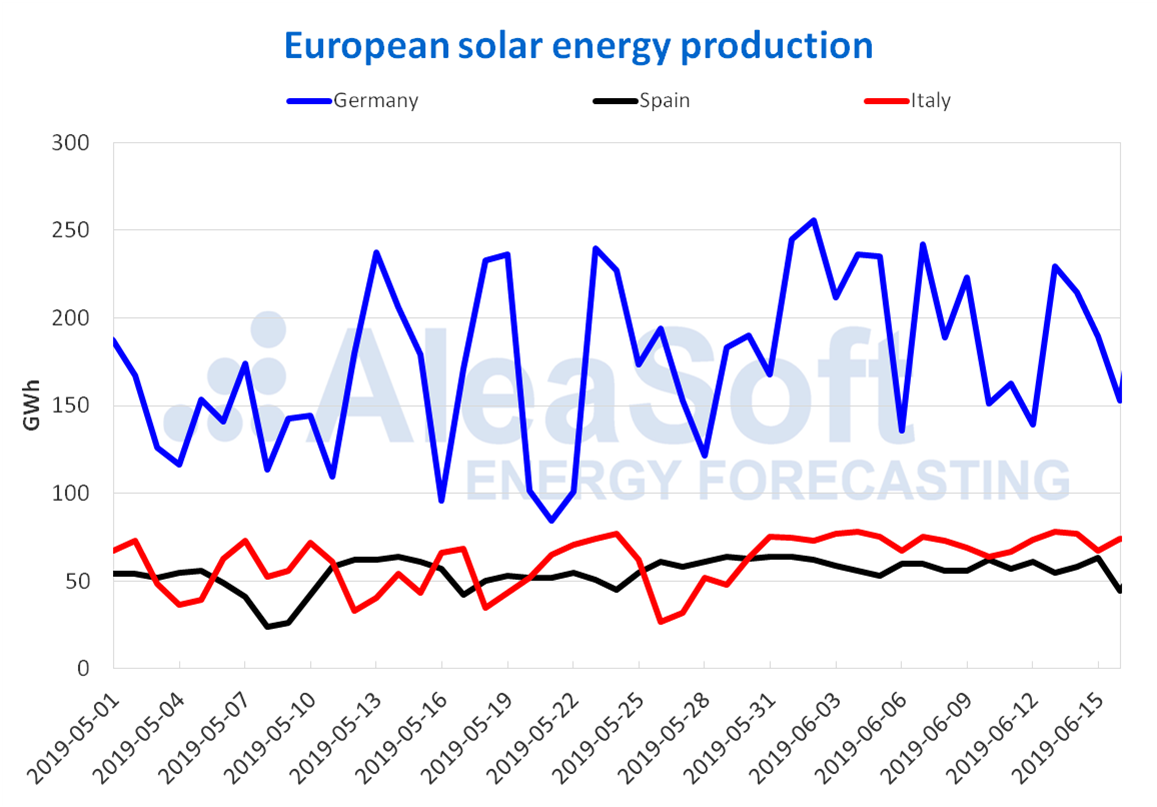