The wholesale electricity market of the Nordic countries, managed by the Norwegian company Nord Pool, comprises seven different countries with sixteen market zones: six market zones in Norway, four in Sweden, two in Denmark, one in Finland and one in each one of the Baltic republics: Estonia, Latvia and Lithuania.

These seven countries represent an electricity demand around 420 TWh per year, a demand volume lower than that of Germany or France, but higher than that of Spain, Italy or the United Kingdom. Therefore, it is considered one of the most important electricity markets in Europe, which is also one of the most extensive geographically and with interconnections both with continental Europe and with Russia and the former Soviet republics.

From the sixteen Nord Pool market zones, the lowest prices correspond to the market areas of Norway, Sweden and Denmark. The most expensive prices are in Latvia and Lithuania, while Estonia and Finland are halfway, but closer to the group of countries with lower prices. 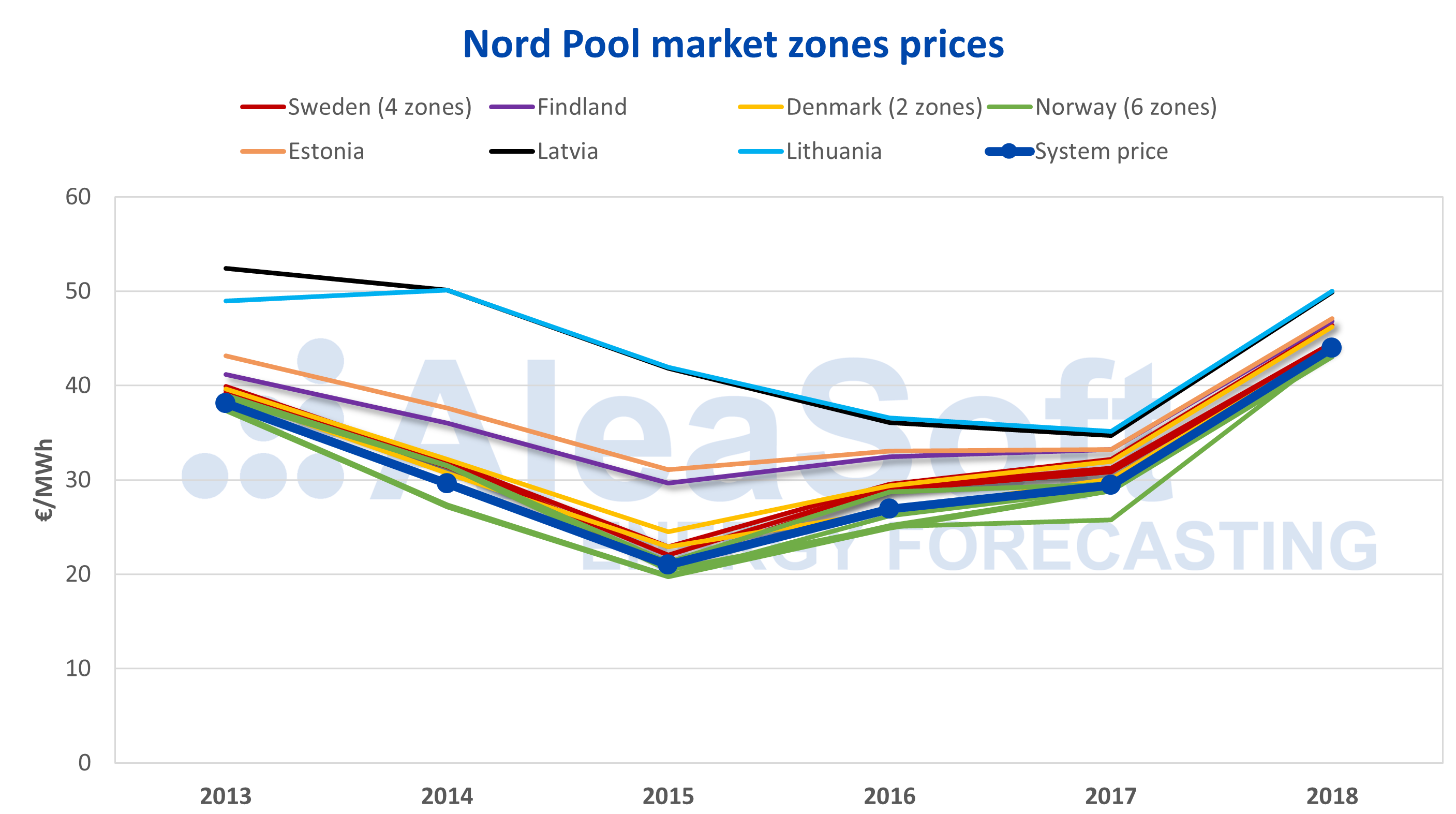 Since 2016, the convergence of prices between all market zones has clearly increased and that will be the trend in the coming years, as the capacity of the interconnections between the market zones increases. During the year 2018, the sixteen market zones were fully coupled and recorded exactly the same price in 1703 hours, 20% of the time. This phenomenon of total coupling in the Nord Pool took place only 9.3% of the hours in 2017 and 4.3% in 2016.

The Nord Pool also calculates a “system price” that represents the price that would be obtained for every hour if there were no limitations in the capacity of the interconnections, that is, if the capacity of interconnection between all the market zones were infinite. In 2018, the average system price was 43.99 €/MWh, 50% higher than in 2017 and 63% higher than in 2016. This price increase is correlated with similar increases in the rest of the European electricity markets and increases in the price of fuels (63% increase in the price of TTF gas and 53% of the price of API 2 coal since 2016) and the price of CO2 emission rights, which tripled in the last two years.

Even enjoying an extraordinary amount of renewable energy in its electricity generation mix, it can be observed that the Nordic countries are not insensitive to the price fluctuations of gas and coal, and also of CO2 emission rights. This is due to the fact that most of its renewable production is hydroelectric, a dispatchable source whose market opportunity price depends, among others, on the price of thermal technology market offers, whether from the Nordic market zones themselves or from other countries such as Germany through electricity imports.

Negative prices are not unusual in the Nord Pool, although in recent years they have only occurred in the two market zones of Denmark, with an extreme value of -200 €/MWh in 2012, while in 2018, the minimum hourly price was -15 €/MWh. Given the low volume of these two zones within the Nord Pool as a whole, these negative prices do not appear in the price of the system, which in 2018 had a minimum hourly price of 2.17 €/MWh.

Compared with other European markets, the Nordic electricity market has historically been the lowest price in Europe, competing for the position with the German market, but clearly emerging as a winner during the last decade. 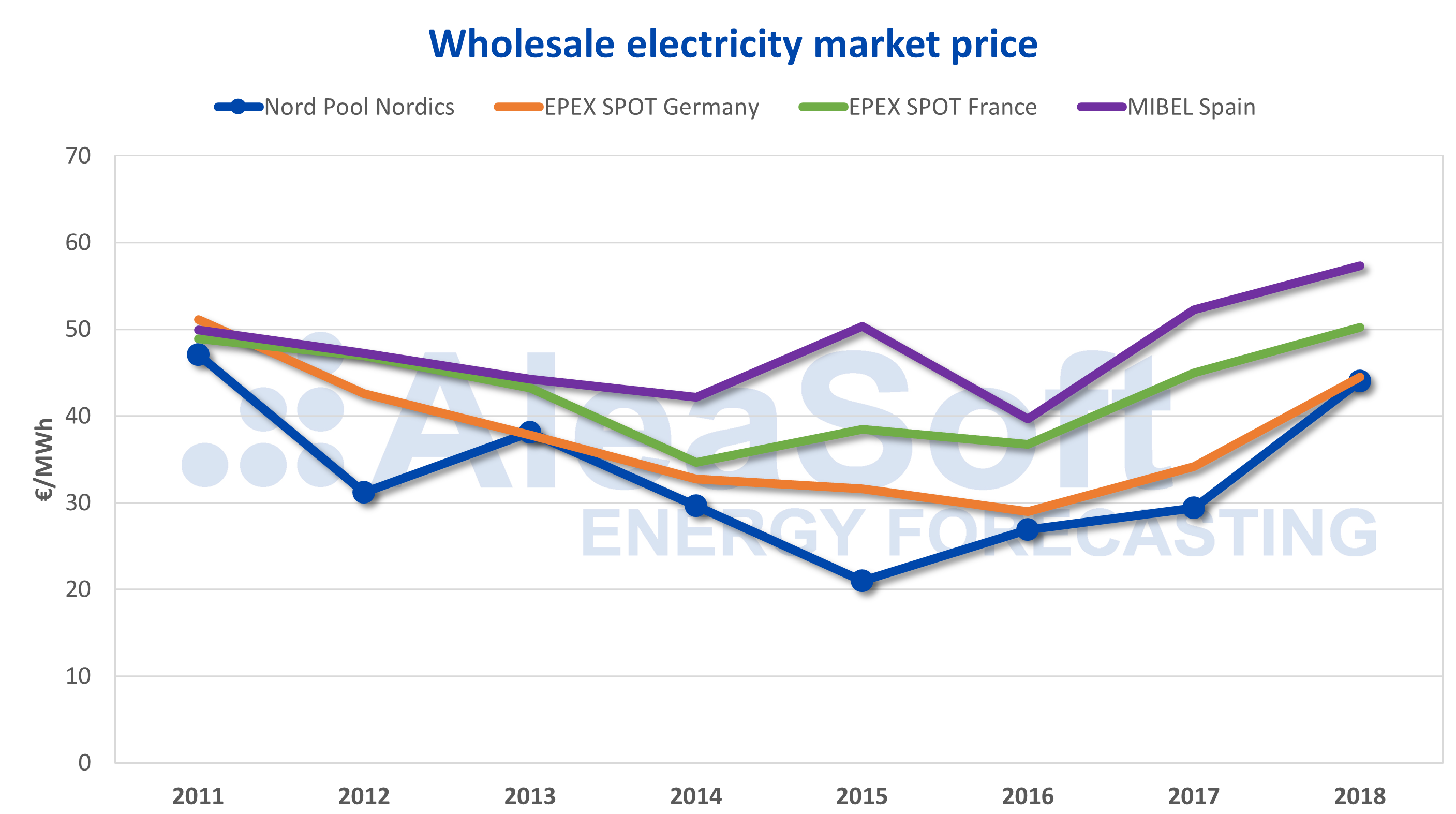 Hydroelectric power clearly dominates the electricity generation capacity in the Nordic countries, with 45% of the total installed capacity. Most of the hydroelectric potential is in Norway and Sweden, with 29 GW and 16 GW respectively, although it also represents a significant fraction of the production fleet in Finland (3 GW and 18% of the country’s total capacity), Latvia (1.5 GW and 54% of the total) and Lithuania (1.0 GW and 29% of all national capacity). 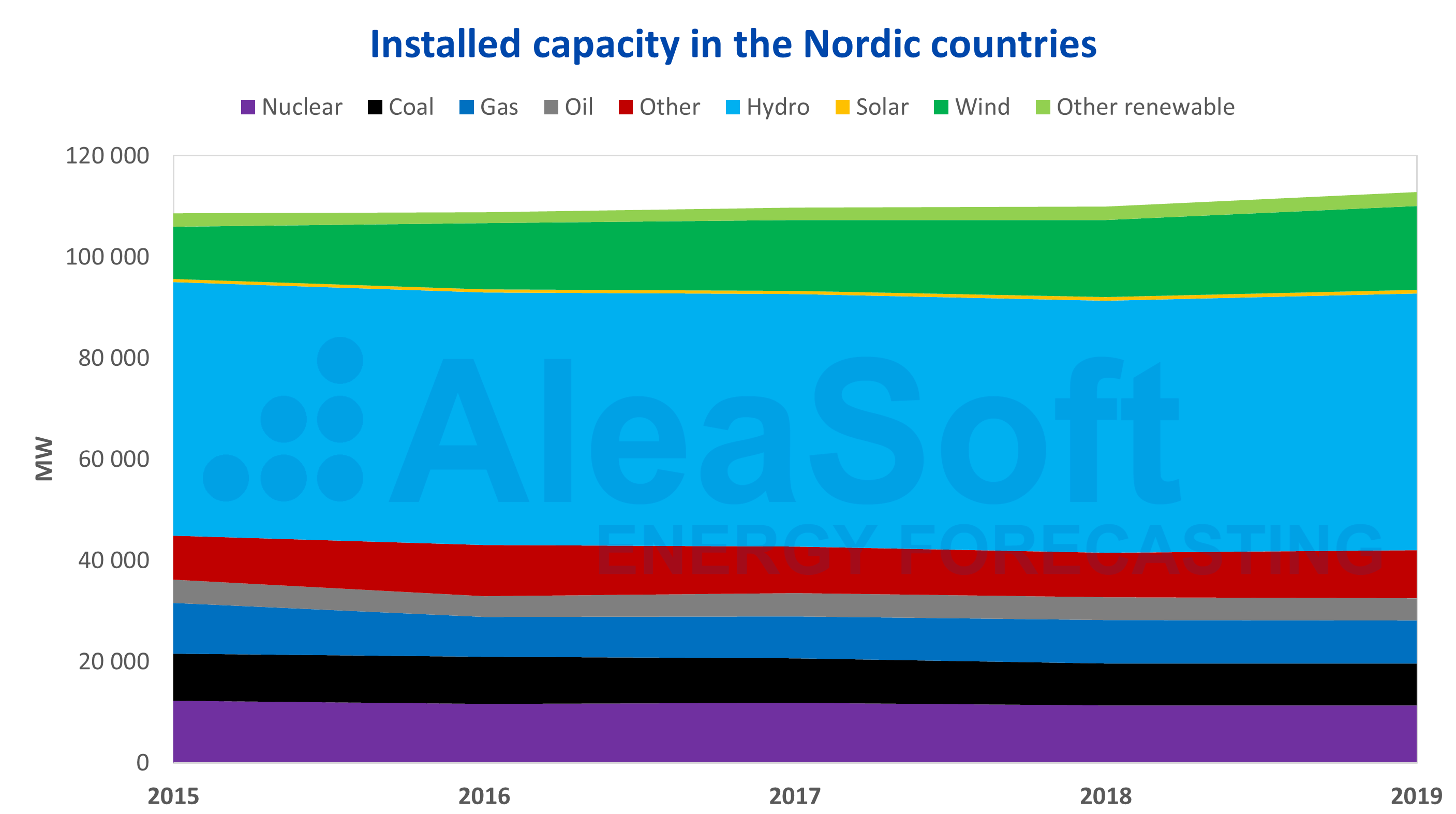 Wind energy power follows, with 15% of the total generation capacity of the market. Wind farms are mainly located in Sweden, with 7.5 GW and 18% of the country’s power, and Denmark, with 4.8 GW and 32% of the national total.

The nuclear energy is placed as third technology in the Nord Pool countries in terms of installed capacity, behind the hydroelectric and wind energy power. Only two of the seven countries have nuclear reactors: Sweden, with 8.6 GW where nuclear represents 21% of the country’s total capacity, and Finland, with 2.8 GW and 16% of the total national capacity.

The renewable and nuclear energies, which are technologies without CO2 emissions, represent 73% of the total generation capacity in the Nordic countries.

The thermal technologies that produce electricity with gas, coal and fuel-oil represent 19% of the electricity generation fleet. The distribution of thermal capacity among the different countries is very different. While Sweden and Norway have zero or very little thermal capacity, in the rest of the countries these technologies represent an important fraction of their generation capacity. For example, in Estonia thermal power represents 76% of total capacity; in Denmark, 59%; in Lithuania, 48%; and in Finland and Latvia, 39%.

Renewable energy technologies as a whole accounted for 62% of the total produced in 2018. If we add the nuclear energy production, the value amounts to 84% of production. This generation is zero or very low in CO2 emissions, which places the Nordic countries in a privileged position in the face of the complete elimination of greenhouse gas emissions in the electricity generation sector.

Also the historically low prices of the Nord Pool market are related to this large part of the production with renewable and nuclear technologies, technologies with low variable and opportunity costs. 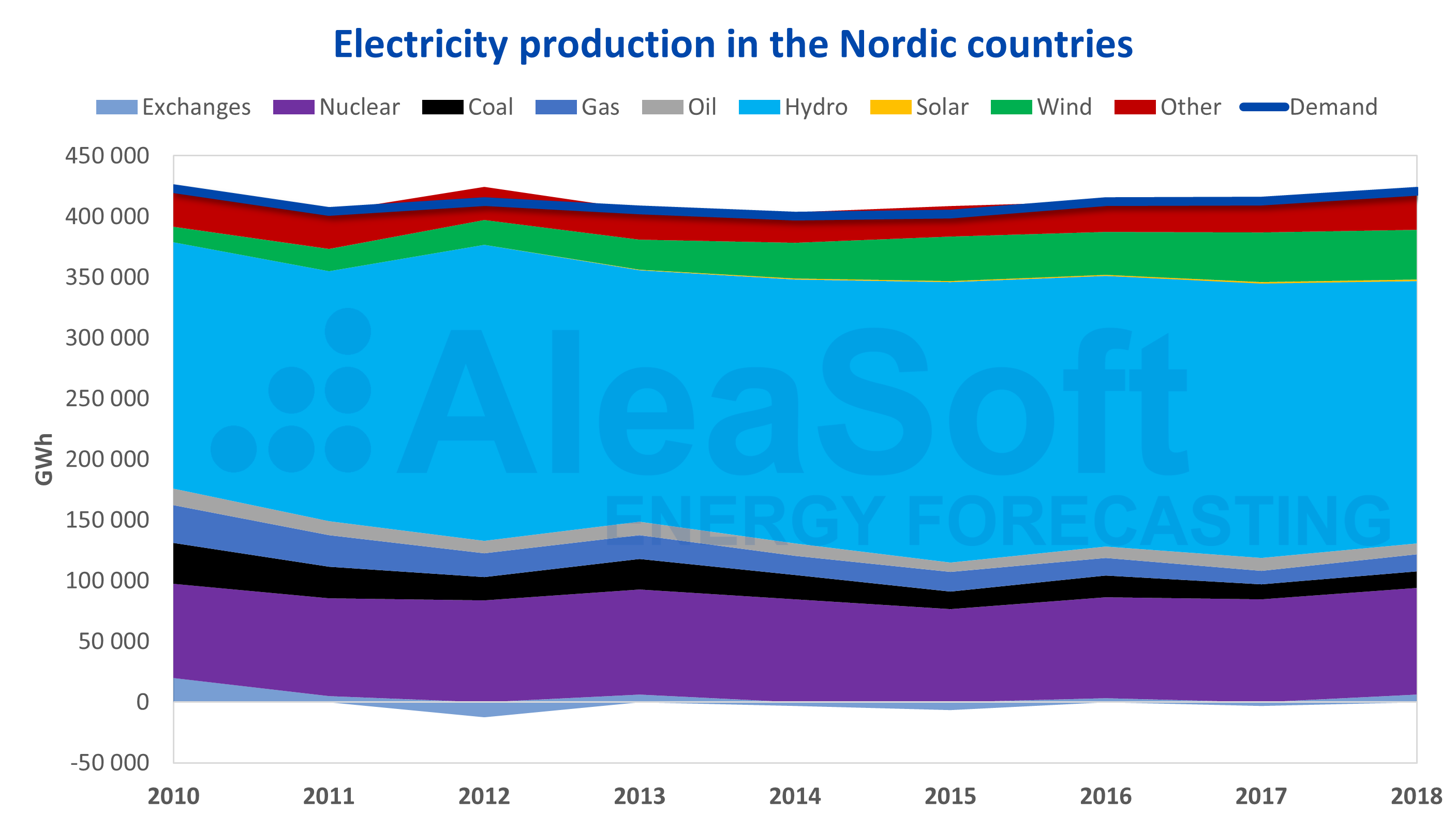 In addition to the electricity exchanges between the countries of the Nord Pool market, these also have interconnections with Russia, the Netherlands, Poland, Belarus and Germany. During the last six years, the exchange balance with Russia has always been an importer with 11.7 TWh net imported in 2018. The second most important exchange balance has been with the Netherlands, this time in export direction with a balance of 3.7 TWh exported in 2018. The balance with Poland tended to grow in recent years and since 2007 the net balance is exporting, with 2018 of 3.6 TWh exported. 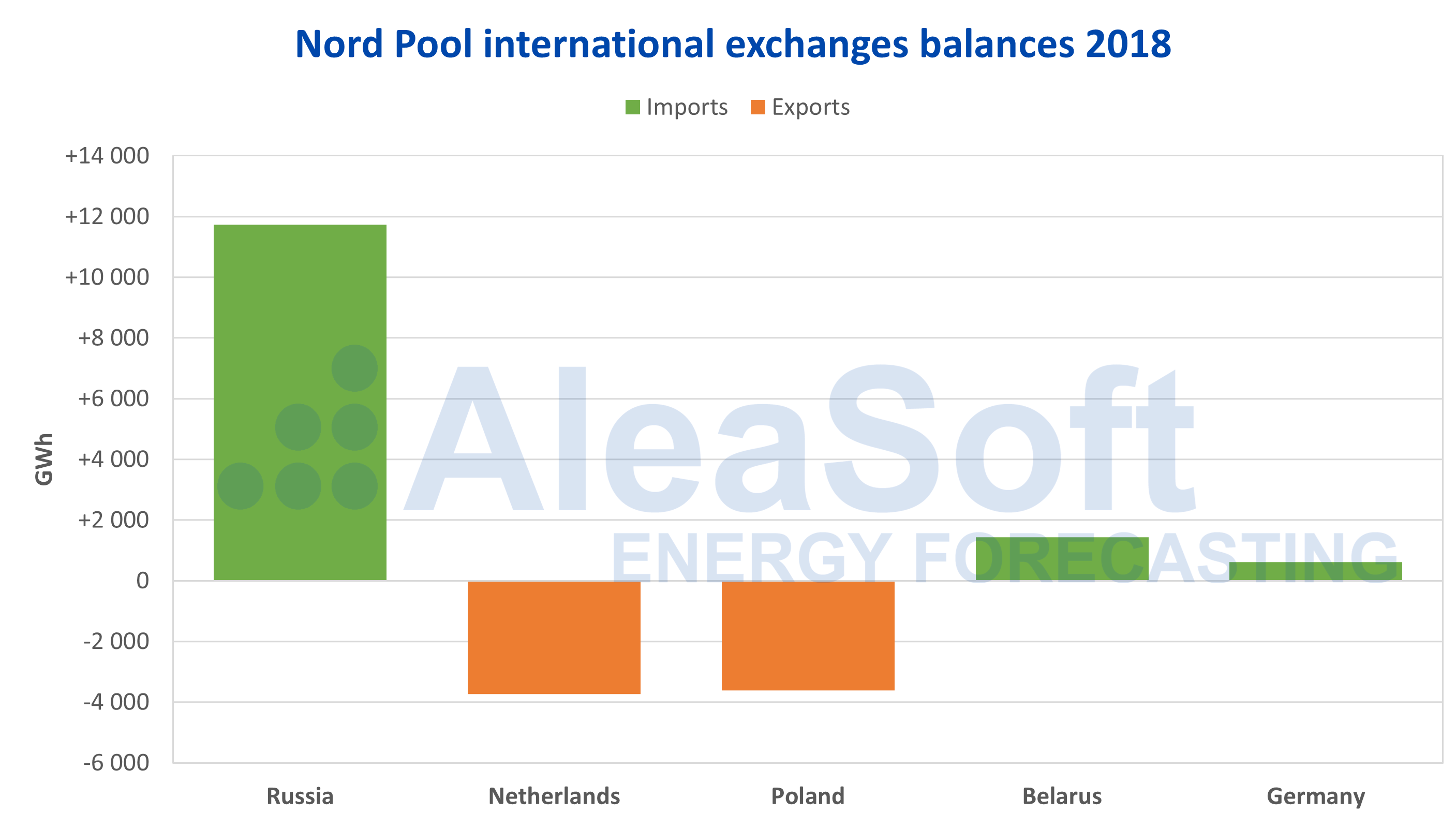 The future of nuclear energy and renewable energy

As we have seen, the emissions level from electricity generation in the Nord Pool countries is very low thanks to renewable energies, practically all hydroelectric, and nuclear. In order to further reduce emissions, all countries of the Nord Pool are betting to a greater or lesser extent on the increase of renewable capacity and the reduction of production with fossil fuels, especially coal and fuel-oil.

With regard to the star technology right now, the hydroelectric, only Norway has plans to increase its capacity significantly in the future. In terms of growth, wind energy is in practically all the Energy and Climate Plans as an important bet for the increase of renewable capacity. And, although it might seem that solar technology has little margin in such extreme latitudes, the increase in production with this technology is expected to be very important in the countries of the Nord Pool, and, although it will not reach the production levels of the hydroelectric of wind power, in the long term it could cover up to 5% of all electricity demand.

As for fossil fuels, there is a clear intention to reduce production with coal in Sweden, Finland and Denmark; the countries that use this fuel the most. But its complete elimination is not perceived in a near horizon. The desire to reduce fuel-oil generation in Estonia is also very clear, the country that uses it most by far, but, again, its total eradication is not expected in the short or medium term.

Finally there is the dilemma of nuclear technology: it does not emit CO2 but it requires the management of its waste. The two countries with nuclear reactors currently face the future very differently. On the one hand, Finland plans to almost double its nuclear capacity in the coming years. On the other hand, Sweden plans to phase out all its power stations starting in the next few years, but with a final push from 2035 to have all power plants shut down by 2050.

All this while it is expected that the electricity demand will increase in the coming years, although it is expected to be at a very low rate, an average around 0.5% per year at the long term. It should also be borne in mind that there are thirteen projects planned to increase the interconnection capacity of the Nord Pool countries with third countries in the next fifteen years that could increase capacity by more than 10 GW.