AleaSoft, June 6, 2019. AleaSoft analyses the behaviour of the Iberian electricity market MIBEL during the month of May and the first days of June, as well as the rest of the continent’s markets. Since mid‑May, the MIBEL market led the price ranking in Europe, coinciding with the days when the wind energy production was lowest. In May, there was a year-on-year increase in most of the European market prices, with the exception of N2EX and Nord Pool.

The electricity market MIBEL ended the month of May with an average price of 48.39 €/MWh for Spain and 48.75 €/MWh for Portugal, values that represent a year-on-year increase of 13% and 14% respectively. According to the analysis carried out by AleaSoft, the main causes of this growth are the drop in hydroelectric production, of 46% compared to May 2018, and the increase in the price of CO2 emission rights in the analysed period, of 72%.

According to the data published by REE, during the month of May the wind energy was the technology that produced the most, covering 23.4% of the demand and with an increase of 40% compared to May of last year, followed by the nuclear energy production, which covered 20.5% of the demand, and by the combined cycles, with a 20.1% of share in the Spanish electricity mix and with a year-on-year increase in its production of 99%.

From May 19 and until the end of the month, the MIBEL market was almost every day the one with the highest daily average price in Europe, with the exception of days 25 and 26. This situation continued in the first four days of June, which caused that so far this week, between June 3 and 6, MIBEL led the price ranking of Europe with an average price of 48 €/MWh. In general, the days when MIBEL had the highest average price in Europe coincided with days of low wind energy production, a situation that was aggravated by the shutdown of Ascó II and Trillo nuclear power plants.

At European level, in most markets the prices tended to decrease in the second half of May, mainly due to the increase in temperatures that favoured the decrease in electricity demand. However, in most markets, the prices increased in May compared to the same month last year, being the EPEX SPOT market of Germany the one with the highest increase, of 18%. The increase in the price of CO2 is one of the causes of this year-on-year increase in electricity prices. Of the analysed markets, the prices only decreased with respect to May 2018 in the British N2EX market, by 18%, and in the Nord Pool market of the Nordic countries, by 2.4%.

During May and also at the beginning of June, the European markets continue to be divided in two groups, according to their price. In the group of markets with the highest prices are the Italian IPEX market, which had the highest average price in Europe in May with 50.67 €/MWh and during the first part of the month led the price ranking of the continent, the Iberian MIBEL market, which in the second part of May and early June replaced the IPEX market from the first position in the price ranking, and the British N2EX market. In general, the markets of this group were oscillating around 50 €/MWh during the first part of May, and around 45 €/MWh towards the end of the month and the beginning of June, although MIBEL in this last period was closer to 50 €/MWh.

In the group of markets with lower prices are the EPEX SPOT markets of Germany, France, Belgium and the Netherlands, generally very synchronised, and the Nordic market Nord Pool. These markets were oscillating around 40 €/MWh in most of the month of May and since the end of the month and so far in June they are below 40 €/MWh. In May the EPEX SPOT market of France had the lowest price in Europe, with 37.21 €/MWh, and so far this week, between June 3 and 6, the Nord Pool market, with 30.45 €/MWh. 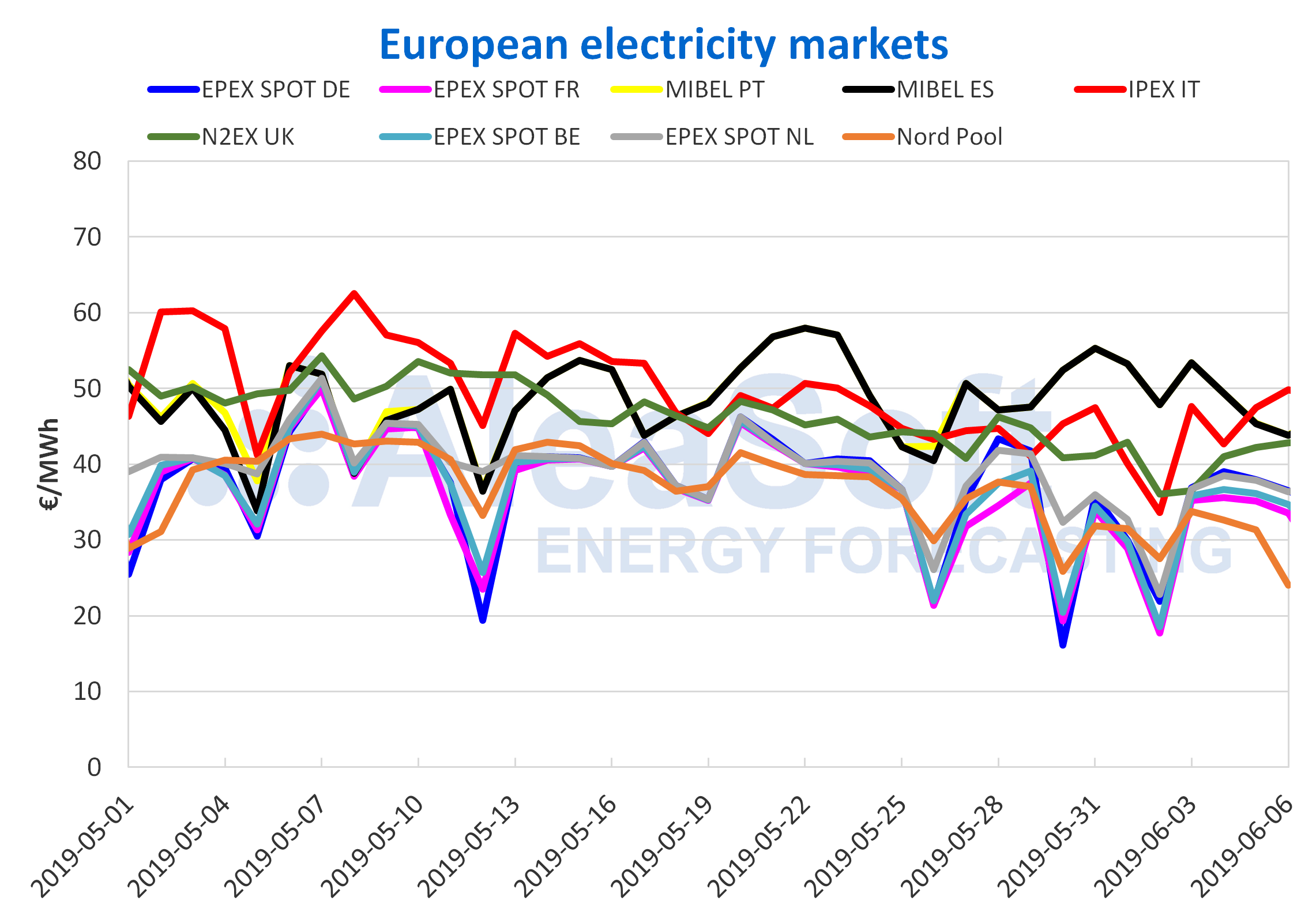 The prices of Brent oil futures for the month of August in the ICE market remained for almost the entire month of May between 69 $/bbl and 72 $/bbl, and had a sharp drop on Thursday, May 23, settling 3.49 $/bbl below the previous day, at 66.50 $/bbl. Since May 23, they continued with a downward trend and settled yesterday, June 5, at 60.63 $/bbl, its lowest value since January 28. This market in May was highly influenced by the US sanctions on Iran and Venezuela, along with production cuts of OPEC, which exert pressure on prices on the supply side. However, since the week of May 20, the concerns related to the demand and economic growth, as a result of trade tensions between the United States and China, as well as the increase in crude reserves in the United States, had a higher influence, causing a downward trend.

The prices of API 2 coal futures in the ICE market for the month of July 2019 showed a downward trend during most of the month of May. In yesterday’s session, June 5, they settled at 52.85 $/t, the lowest value in the last two years. This market was influenced during the month of May by the more competitive gas prices and the global supply surplus.

The prices of CO2 emission rights futures in the EEX market for the reference contract of December 2019 were traded the entire month of May between 24.4 €/t and 27 €/t, with a slight downward trend.

The Spanish electricity futures in the OMIP and EEX markets, as well as those of Portugal in the OMIP market, for the third quarter of 2019 showed a downward trend during the month of May, falling below 53 €/MWh in the last days of the month. Since the beginning of this week they continue with a downward trend and settled on Wednesday, June 5, below 51 €/MWh in the case of electricity futures of Spain and below 52 €/MWh for the case of the futures of Portugal.

The futures for next year, both in the OMIP and EEX markets for Spain, and in the OMIP market for Portugal, remained in the range from 55.20 €/MWh to 56.50 €/MWh throughout the month of May.

The futures of France and Germany in the EEX market for the next quarter also remained with a downward trend throughout the month of May, settling on Friday, May 31, below 40 €/MWh in both cases, something that continued to happen in the first three sessions of June. In the case of futures for next year, the trend was slightly bearish in the two markets, highlighting the German market which remained on average 3.37 €/MWh below the French market throughout the month.

The electricity demand of mainland Spain decreased by 0.9% in the recently completed May compared to May last year. According to the data of REE, when correcting the effects of temperature and working patterns, the fall was of 2.7%. So far this week the demand increased by 2.8% compared to the demand of May 27 to 29.

The solar energy production experienced a considerable increase in the last month, of 31% compared to May of the previous year, thanks to an increase in solar thermal of 58% and in photovoltaic of 14%. In this week, the joint production of these two technologies decreased by 4.8% compared to the average values of last week. At AleaSoft it is expected that next week the solar energy production continue to fall slightly with respect to the average values of the days elapsed this week.

The nuclear energy production increased in the month of May by 7.2% in year-on-year basis. This week the production with this technology started to increase slightly, because the Ascó II plant started operating again since yesterday, June 5, after a shutdown for refuelling that began on April 27. The Trillo plant, which is still shut down for refuelling, is expected to start operating on June 9. 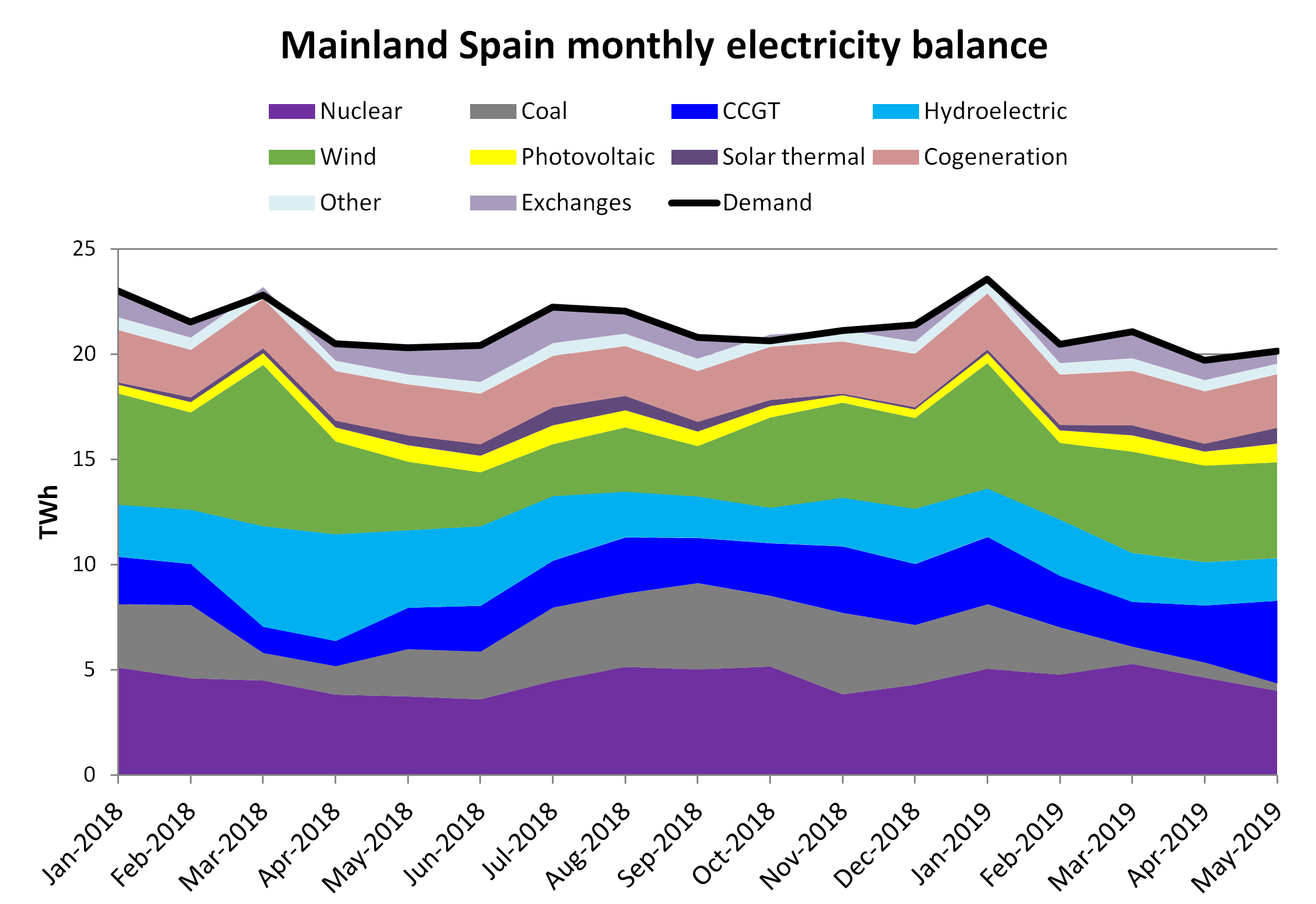 The hydroelectric reserves decreased by 22% in May this year compared to those accumulated up to May 2018. This week they fell by 45 GWh, till the current capacity of 12 390 GWh, which represents 53% of the total capacity, according to the Hydrological Bulletin published by the Ministry for the Ecological Transition.