AleaSoft, May 19, 2020. The current situation of health crisis to which an economic crisis was added is creating a future scenario that changes very rapidly as time passes and the bottom of the fall is seen. Now that commercial and economic activity, still timid, begins to give the first signs of recovery, a webinar will review the evolution of the European energy markets so far and their future prospects, together with the present and future impact on renewable energy projects financing.

The COVID‑19 pandemic caused a health crisis that led all governments in Europe, and practically in the entire world, to take measures to prevent its spread and thus avoiding the collapse of the health systems of each country. These measures brought to a standstill all non‑essential educational, commercial, industrial and economic activity, which caused an inevitable drop in energy consumption and had an impact on the markets where oil, gas, electricity and CO2 emission rights are traded. 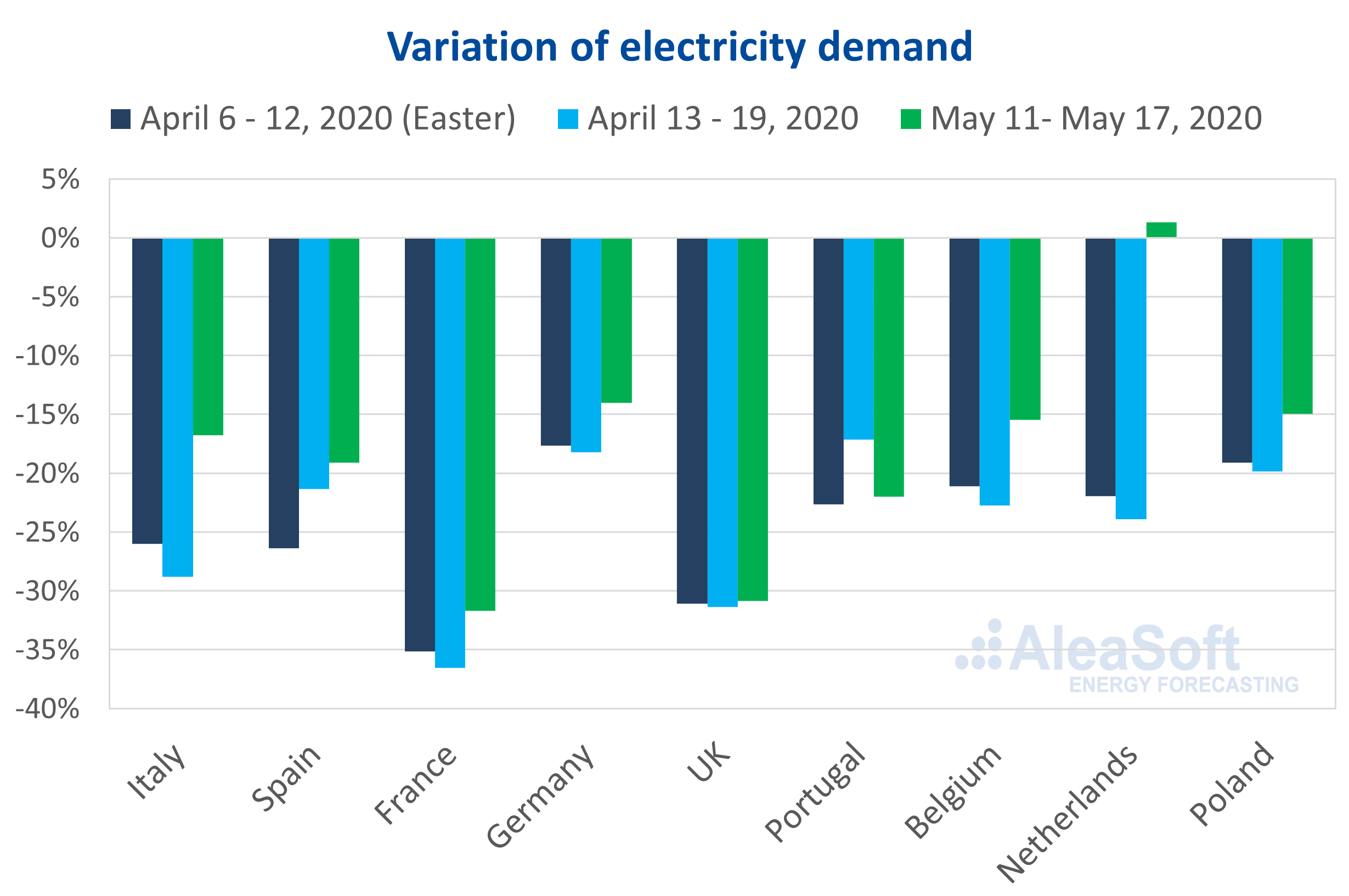 Variation in electricity demand compared to the week of 2 8/3/2020 before the confinement.
Source: AleaSoft using data from TERNA, REE, RTE, ENTSO-E, National Grid, REN and ELIA.

Although the fall in prices in the European electricity markets, as explained in the last AleaSoft‘s webinar on the influence of the coronavirus on the energy markets, is a situation that was occurring since the last quarter of 2018 due to the downward trend in gas prices, the price levels at which the markets are currently are affecting the income of the electricity generation plants. The current situation of the energy prices and the uncertainty regarding the recovery from the crisis also raise important uncertainties about the financing of the renewable energy projects.

In mid‑March, when it began to be seen that this was going to be a severe economic crisis, there was already speculation about the possible paths that the economic recovery could take. There was talk of type V scenarios, with a sharp drop and an almost immediate recovery in the third and fourth quarter, of type U scenarios, where the recovery would be slower, in years instead of months, and of type L scenarios, where the downturn in the economy could have long‑term impacts.

At this stage of the crisis, the type V scenarios were already completely ruled out, and the type U scenarios are with a fairly wide U. The most recent estimates of the evolution of the GDP speak about a fall of at least 7.5% in the euro area for this year 2020, and the recovery in 2021 would reach at most 6%, so the previous GDP levels will not recover in 2021 and it will take at least a few more years.

For Spain, the prospects are much more pessimistic. The forecasting for the fall in GDP in 2020 is around 10%, and the rebound in 2021 is around 7%, so that GDP will be quite far from the pre‑crisis levels.

On this occasion, there will also be the intervention of Tomás García, Senior Director of Energy & Infrastructure Advisory at JLL, who will explain the current situation of the financing of renewable energy projects and the challenges posed by this crisis.