AleaSoft, April 21, 2020. The measures taken against the COVID‑19 pandemic are having an impact on the energy demand, the gas, oil and electricity markets, and also on the prospects and viability of the renewable energy projects, the energy and climate plans of the European countries and the self‑consumption photovoltaic installations. On the other hand, they also represent an opportunity for large consumers and for the electrointensive industry.

The COVID‑19 pandemic and their consequences

The COVID‑19 is an infectious disease that is transmitted relatively easily over short distances and in contact with contaminated surfaces. This situation led the governments of practically all the countries of the world to implement measures to stop and reduce its spread and thus avoid collapsing the health systems that, faced with an uncontrolled exponential increase in those infected with severe symptoms, may not have enough places in the intensive care units.

These measures went in the direction of preventing people from coming into contact and also of moving as little as possible. The taken measures include the closure of schools and universities, the confinement of the population and the stoppage of all non‑essential commercial activities. Measures of this nature and depth had a very important impact on the production and the economic activity, and also, obviously, on the energy demand and, consequently, on the energy markets.

Current situation and forecasting for the oil, gas and CO2 emission rights markets

The price of a Brent oil barrel is at the level of the lowest prices in the last fifteen years. The prices suffered a sudden drop, from $60 per barrel to close to $20, in early March when the agreement of the producer countries to limit the production ended. Faced with the lack of a new agreement and the fall in demand due to the slowdown in the world economy due to the pandemic, the prices sank. 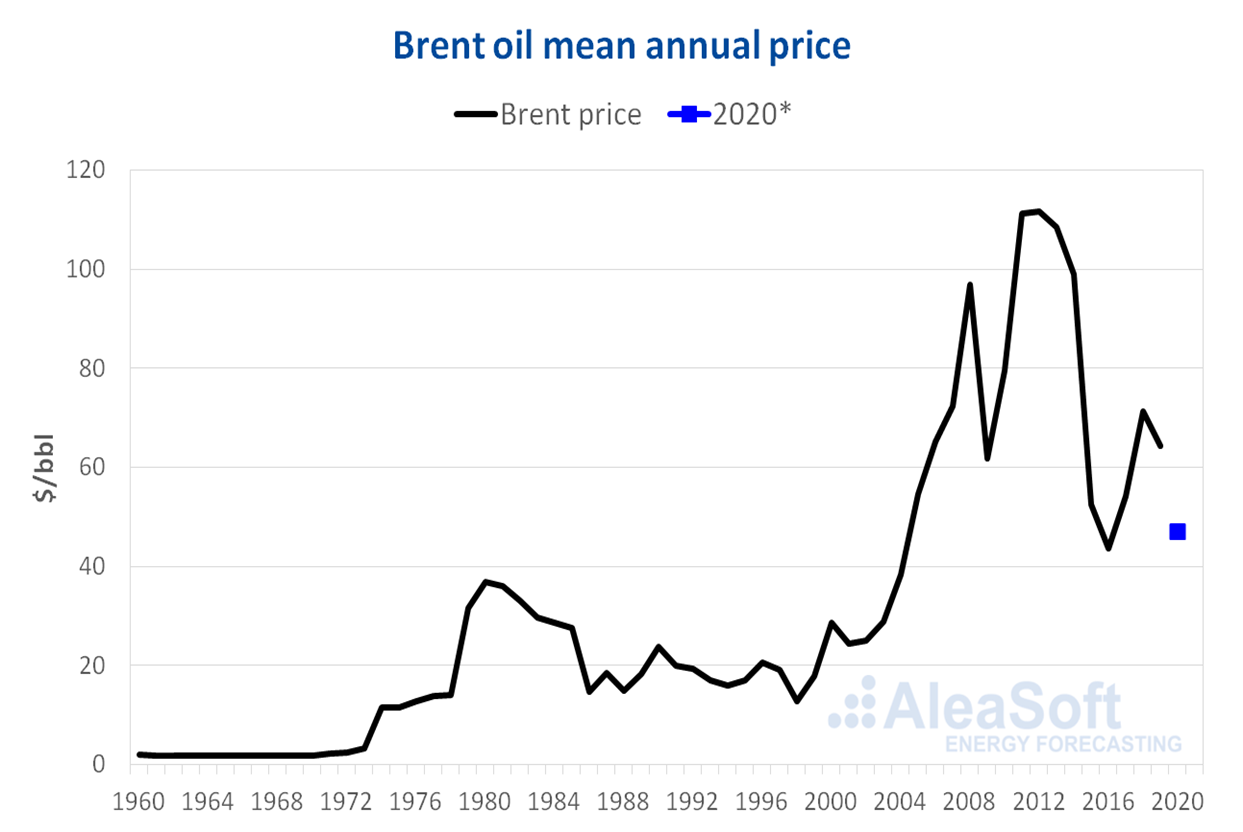 The new agreement reached last Monday, April 13, halted the fall in prices and allowed to glimpse a recovery attempt that was cut short by the pessimistic perspectives of the International Monetary Fund regarding the recovery of the world economy in the face of this crisis. In any case, as it is a product of which the producing countries strategically control the supply, and since a price that is too low for too long is not beneficial to anyone, the chances that the price will end up recovering soon are very high.

The Brent futures markets are seeing an equilibrium price around $50 a barrel in the long term. The forecasts by Fitch Ratings and the United States Energy Information Administration (EIA) are already forecasting barrel prices of more than $45 for next year, although the IMF is somewhat more pessimistic with forecasts below the $40.

The prices of the TTF European gas market are also at minimum values of the last fifteen years. But in this case, the fall in prices was the continuous path in recent months. Since the highs registered in September 2018, the prices were falling to the level of the current €6‑7/MWh. This price drop behaviour since the last quarter of 2018 is the same that we observe in the electricity markets across Europe, because the fall in gas prices was the main factor that led the electricity markets to the current low prices. 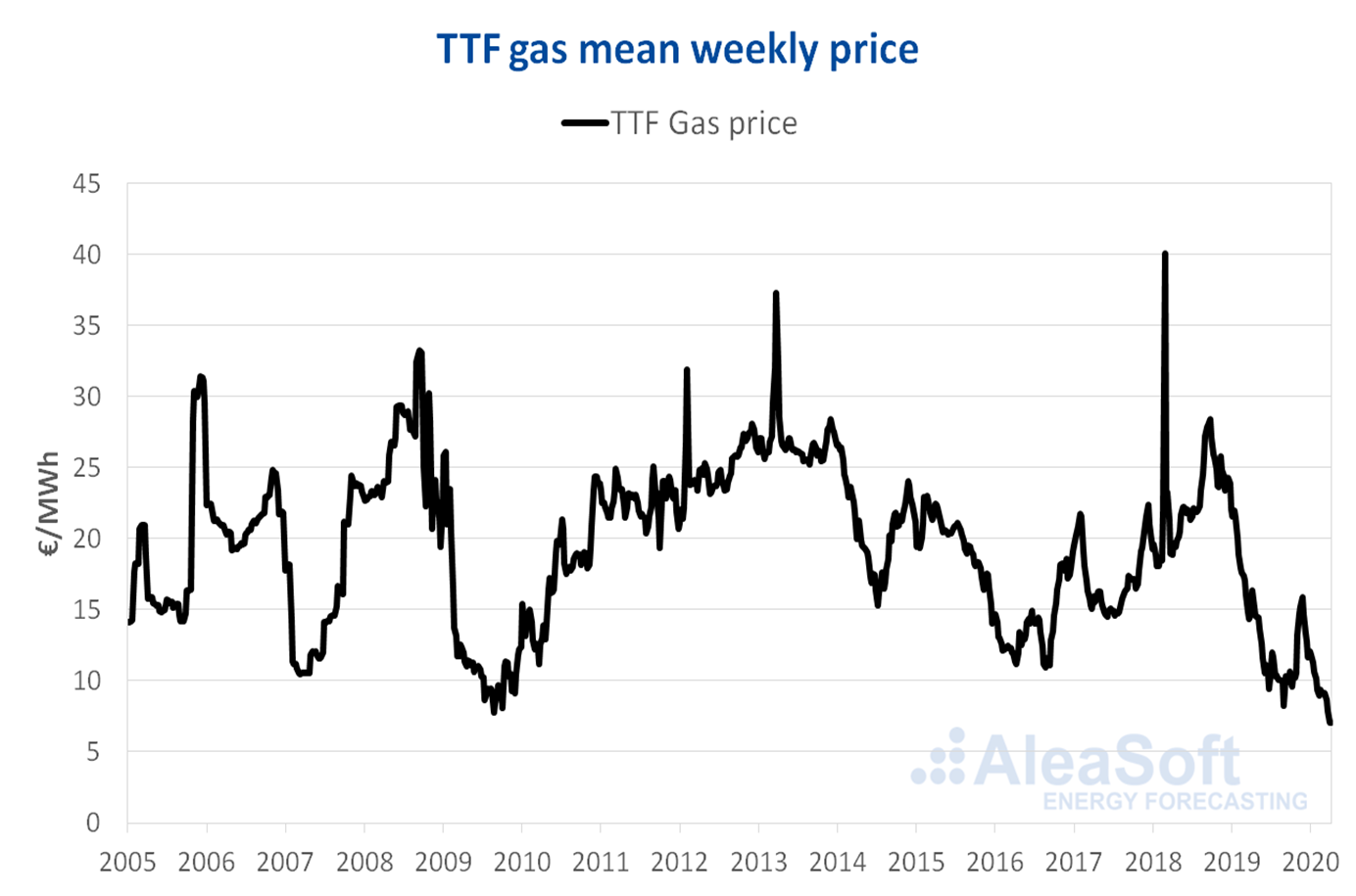 In the medium term, a recovery in gas prices is expected, due to its close relationship with Brent oil prices and the recovery in demand once the recovery from the crisis begins. The TTF gas futures are currently seeing an equilibrium price around €15/MWh.

Regarding the CO2 emission rights prices, these were around €25/t since they began to rise in 2018. Just in the middle of this month of March, the prices registered a significant drop that placed them close to €15/t. This behaviour is exactly the same as that observed in the electricity futures markets and corresponds more to a situation of panic in the face of an uncertain future due to the measures taken against the pandemic than to a loss in the value of the emission rights. A few weeks later, the price is already recovered to around €22/t. 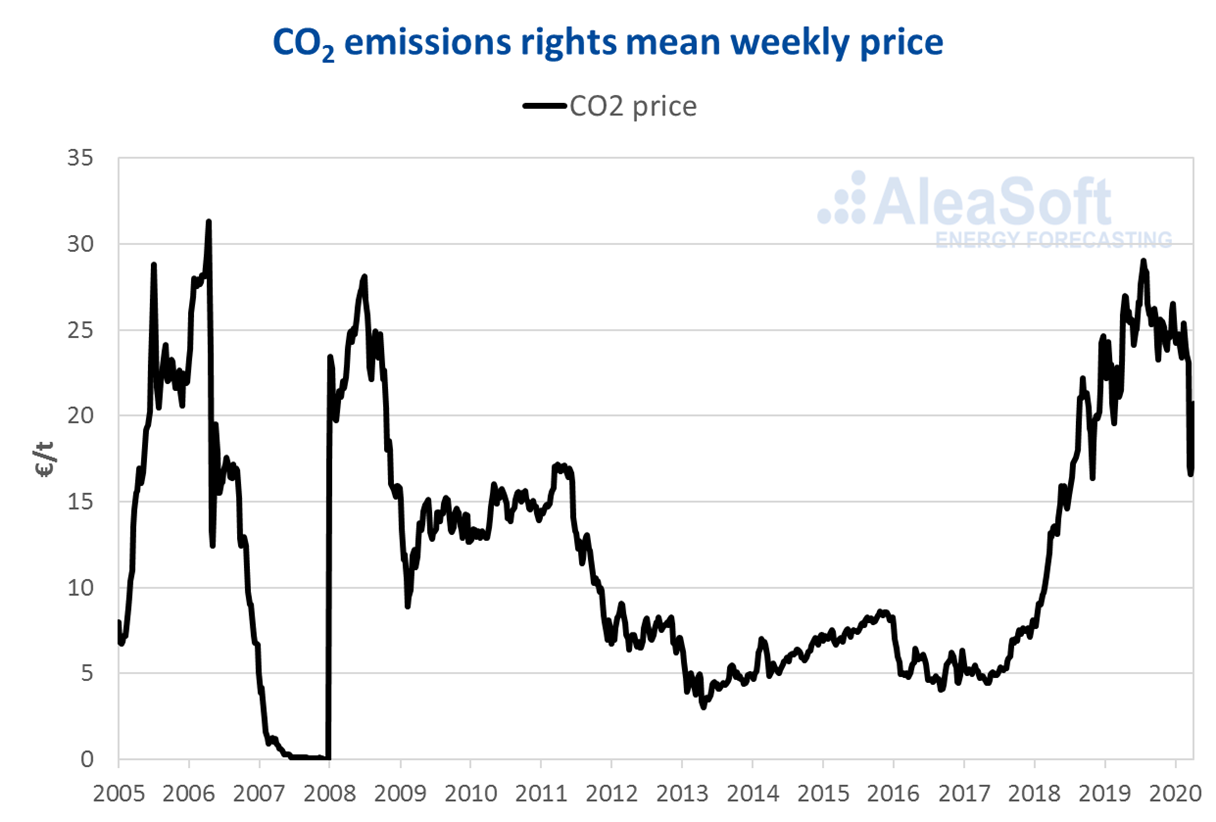 The measures of confinement and restriction of the commercial activity, more or less strict depending on the country, led to a fairly general fall in electricity demand in Europe. The countries where the impact is most evident are Italy, being the country that first decreed the mandatory confinement of the population, and Spain, having one of the strictest confinements. In Italy, the demand was decreasing week by week since the confinement began on March 9 and it is at the lowest levels of the last fifteen years. In Spain, the fall in demand was very severe and it is necessary to go back to 2003 to find similar levels. 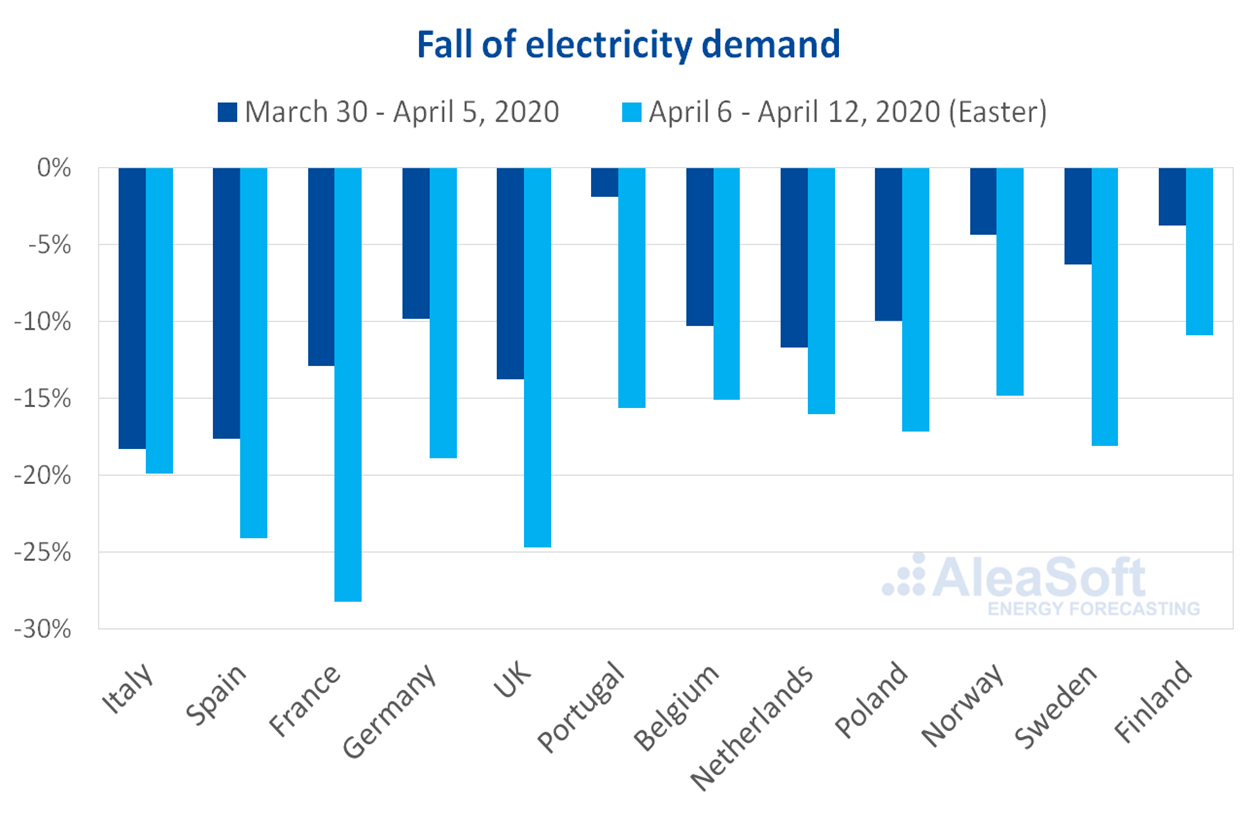 The price situation in all electricity markets of Europe is very low, at the level of the lowest prices in the last decade, although, for most markets, the current prices are not exceptional. The behaviour of the last months was analogous to that observed in the gas market prices with a continuous decline since the highs of September 2018. As previously mentioned, the low gas prices, mainly, together with a certain influence of the fall in demand, are the main responsible for the current low prices in the electricity markets.

At this point it is already evident that the current health crisis will be followed by an economic crisis given the slowdown that practically all commercial and industrial activity suffered. In mid‑March, all international economic agencies and institutions pointed to a rapid, practically instantaneous, recovery of the economic activity once the restrictions were lifted, so that in 2021 the levels would already be the previous to the crisis caused by the pandemic.

As the weeks passed, the perspectives worsened and the recovery was delayed. Currently, the fall in GDP for this 2020 is estimated to be at least 6% in most European countries, although it may reach double‑digit falls in some. The recovery for 2021 is around 5% in the most optimistic cases, so the 2019 GDP levels are not expected to recover until a few years from now. At AleaSoft “wide U” scenarios are currently used, where the economic recovery may start at the end of this year 2020 in some countries, but the pre‑crisis levels will not be reached until 2023, in the best case for some countries.

Regarding the recovery of electricity demand, the scenario for each country is very particular, given that the demand has a different sensitivity to GDP due to its economic and industrial structure and its intensity or energy efficiency. Regarding the electricity markets prices, their recovery will be more linked to the behaviour of the gas prices than to the recovery of the demand.

Impact on the renewable energy plans and opportunities

Regarding the viability of the renewable energy projects, the current situation of low prices in the electricity markets and the situation of great uncertainty that is being experienced right now may suggest that the projects may cease to be viable. Whether the projects are financed through a PPA or directly to the market, the current price conditions are not the most favourable for their interests. In this sense, the AleaSoft‘s message is one of optimism: if a project was viable before the crisis, it continues to be viable today in the long term.

It is important to emphasise the importance of the long‑term vision. A situation like the current one of low prices is not favourable for an electricity generation plant, but situations like this occurred more or less regularly in the past and will happen again in the future, as well as the opposite situation of periods with high prices. But, in the long term, the market is in balance and the favourable situations for buyers and those favourable for sellers alternate. The important point is having a good energy purchase or sale strategy that is based on reliable long‑term price forecasts. With this strategy, a buyer, such as an electro‑intensive industry, or a seller, such as a photovoltaic energy plant, can protect themselves against adverse situations.

The delay in the construction projects, along with less attractive prospects for future investments in renewable energy plants and self‑consumption facilities, may make it difficult to achieve the renewable capacity targets established in the National Energy and Climate Plans of the European countries. These plans will surely need a review, either to adapt the objectives or to change the proposed strategies.

Information on the impact of the pandemic

At AleaSoft, an information publishing campaign on the effects of the COVID‑19 pandemic on the energy markets in Europe is carried out. Within this framework, it is possible to find initiatives such as the Electricity markets observatories on its website and the holding of free webinars. In this article there is a comprehensive summary of the webinar held on April 16 on the influence of coronavirus on electricity demand and the European electricity markets, and a second part of which is already scheduled for May 21 with more updated data and forecasting and a greater focus on the financing of renewable energy projects. It is possible to request the recording of the webinar or the registration to the following webinar at the address webinar@aleasoft.com.