AleaSoft, April 24, 2020. The prices in the European gas markets are at historical lows as the oil prices. In both cases, we can find the fall in energy demand due to the COVID‑19 crisis among the causes. But there are other geopolitical interests that also promote the current situation of low fuels prices, such as the disincentive of the investments in photovoltaic and wind energy, or making shale gas extraction unfeasible in the United States.

The historical declines in oil prices are making the most headlines at a time when the COVID‑19 pandemic monopolises virtually all of the news’s attention. The abnormally low oil prices are also due, in part, to the consequences of the global pandemic: the fall in fuel demand worldwide due to the slowdown in the economy in practically all countries pushed the reserves to the limit of occupation and there is nowhere to store it. 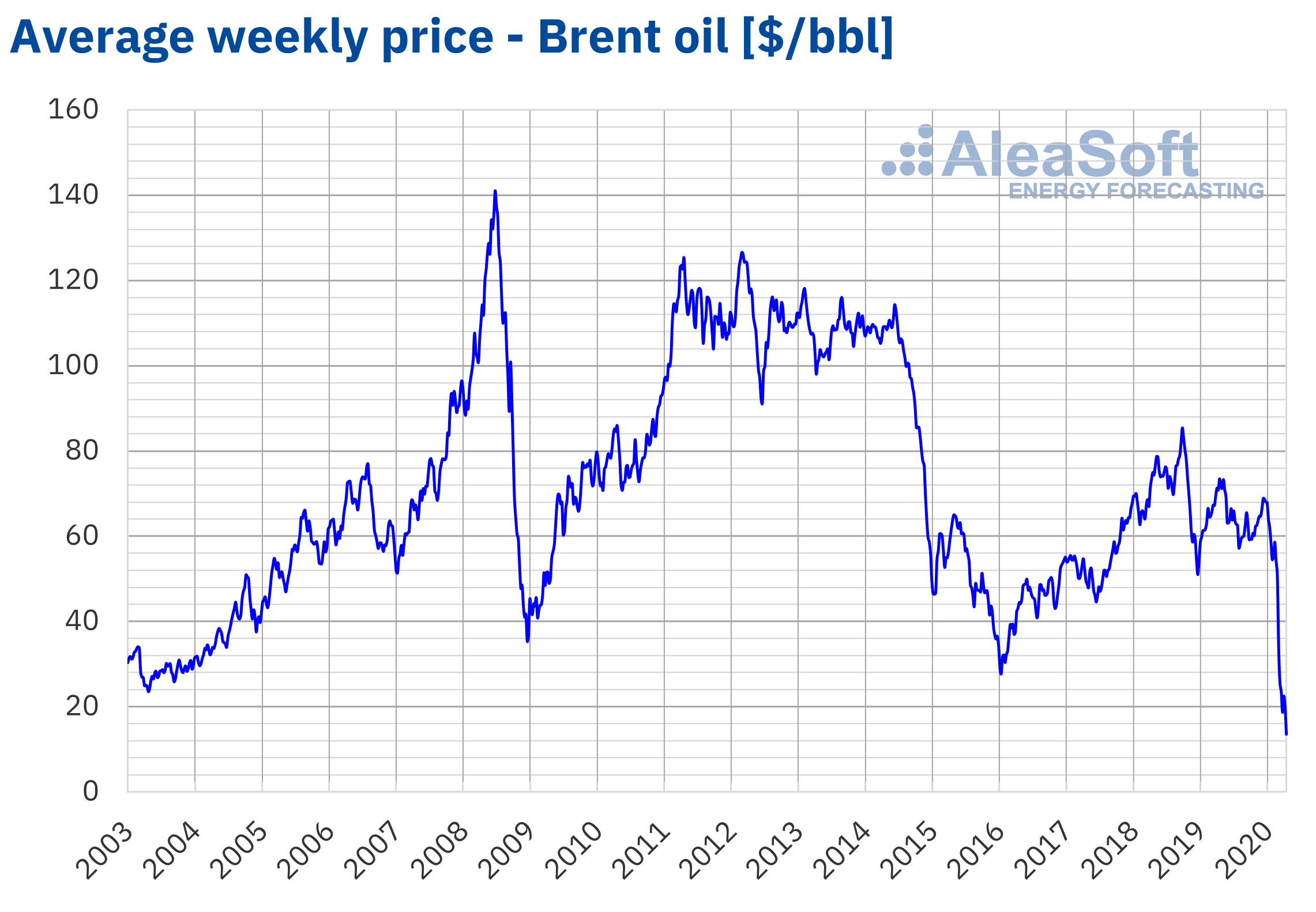 The news of oil at low prices is very striking since it is a market where the supply is highly controlled by a few producing countries that manage it in a timely manner to avoid precisely these situations that would harm them. So, if the demand decreased, why didn’t the production also decrease? A price war between Russia and Saudi Arabia, the latter leading the rest of the OPEC countries, delayed an agreement to limit the production in the face of falling demand. While the agreement did not come, the prices continued to drop since the beginning of March and the reserves continued to fill. Once the agreement was reached, on Sunday, April 12, it seems that it was too late to overcome.

The current situation of the prices of the European gas markets

Without occupying so many headlines, the situation of the gas prices is also at record lows. Since the maximum prices registered in September 2018, the prices in the European gas markets did not stop falling. Since that end of the third quarter of 2018, the prices in the Iberian gas market MIBGAS fell by 77% to below €7/MWh. The situations in the Dutch TTF and British NBP markets are completely analogous with price falls of 80% and 87%, respectively. 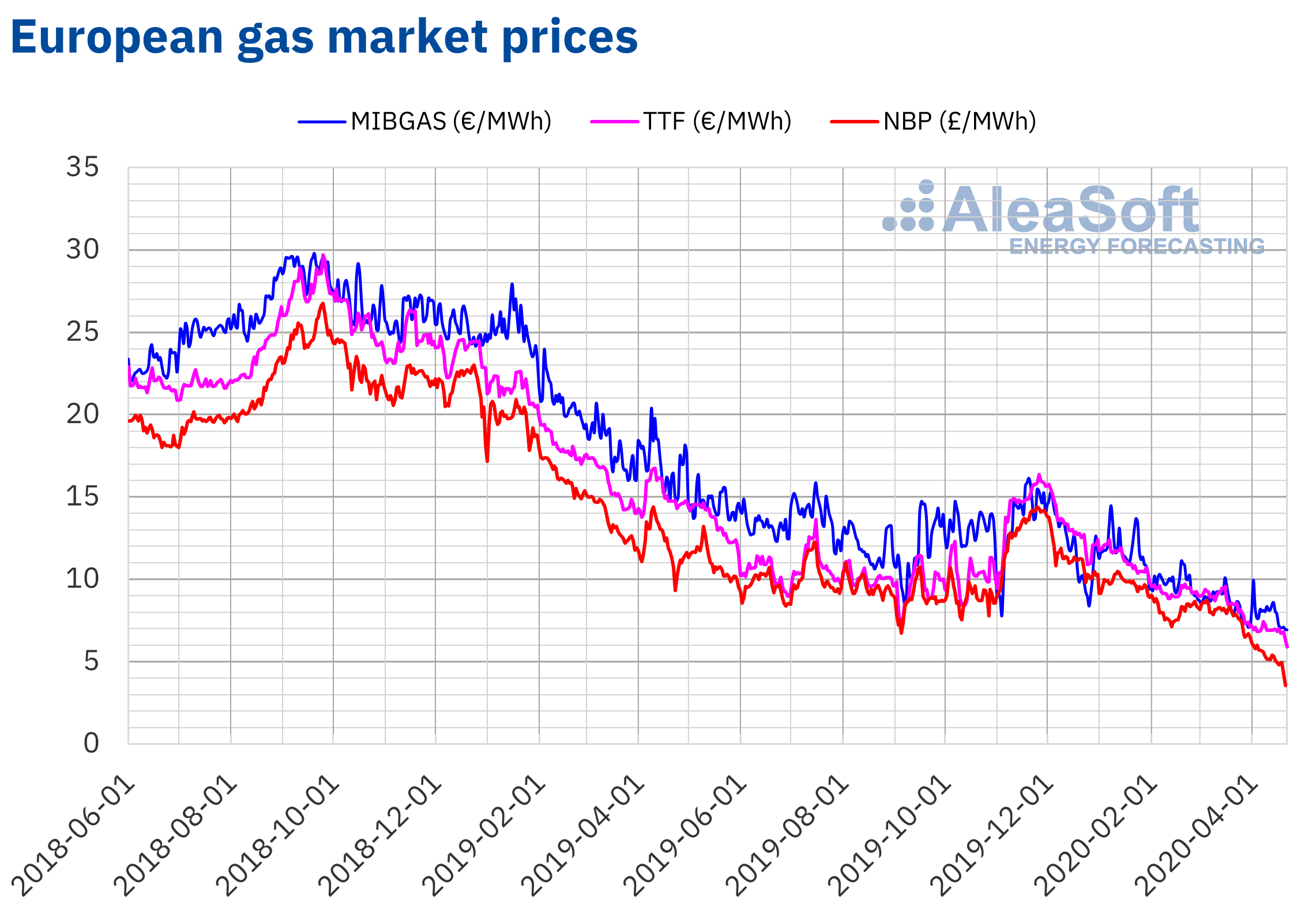 The gas demand was also affected by the COVID‑19 crisis and its fall also impacted the gas market prices in recent weeks. But, as seen, the downward trend in gas prices, which brought us to the current situation of historical lows, is long‑standing and, as always, it cannot be attributed to a single cause but rather to a combination of several factors.

On the one hand, there are the gas reserves stored throughout Europe that are at historically high levels for this time of year. In all the countries of the European Union, the stored gas reaches 657 TWh, the highest value in the history at this time of year. This amount of gas represents 59% of all available storage capacity. These levels of the reserves are due to the lower demand during the winter, which registered temperatures that were less cold than usual. 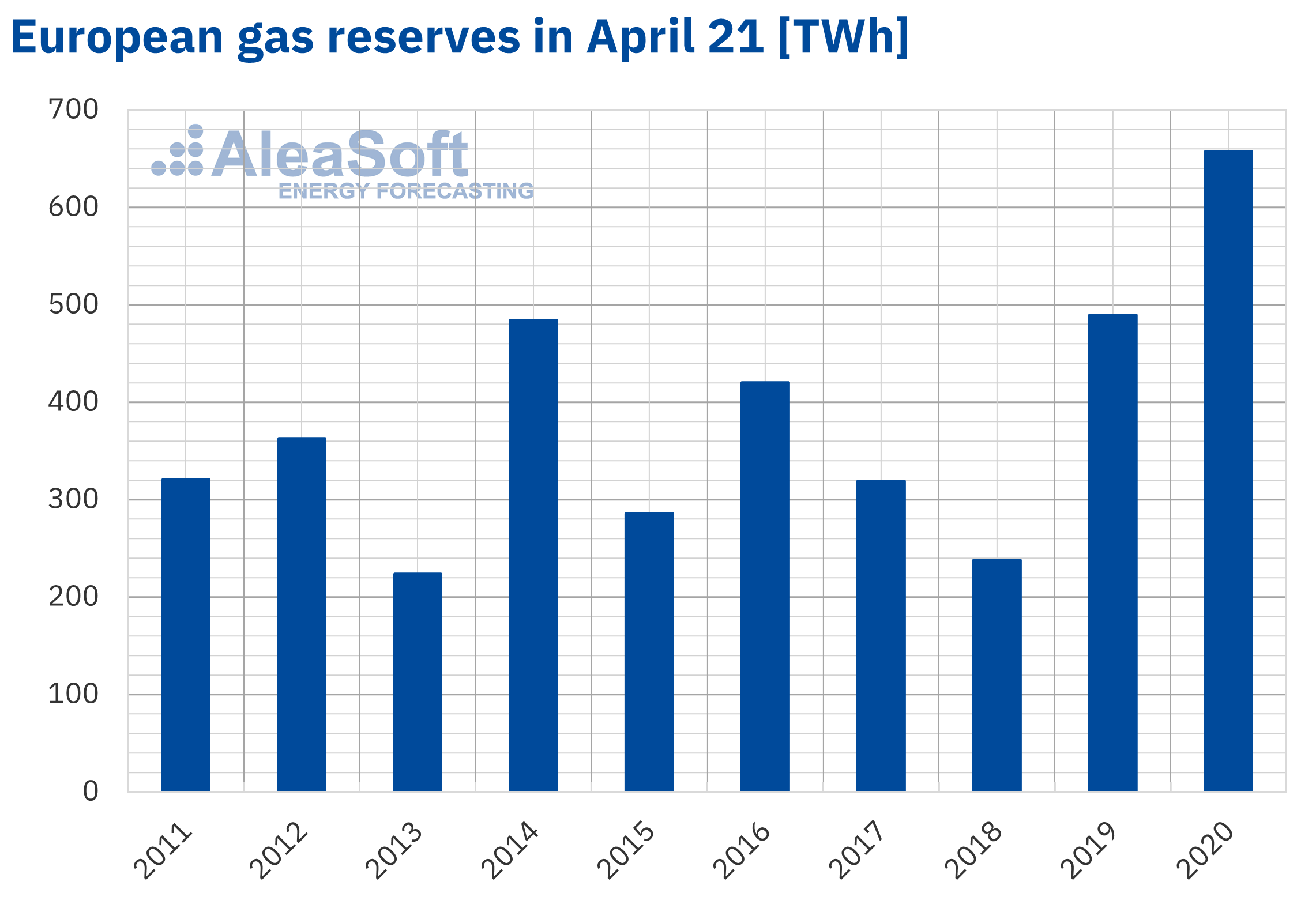 On the other hand, as in the case of Brent, there are the geopolitical conflicts and tensions. For example, the traditional gas producers, those who extract gas from wells, appear to have some interest in keeping the prices low for the time being to make the shale gas extraction less profitable, and ultimately unfeasible, particularly in the United States. These low prices put into crisis the production of gas in the United States that is not profitable enough and the accumulated debt is counted in billions of dollars, a situation that, in the worst case, could drag banks to the crisis.

The low oil and gas prices also hinder the expansion of the new biofuels as alternative transportation fuels. In the same way, having gas at very low prices discourages the investment in renewable energy projects, especially photovoltaic and wind energy, because a low gas price keeps the electricity markets prices low and makes the new generation plants less profitable.

Future perspectives of the gas prices

If one of the causes of the current low gas prices is the low demand of a mild winter and due to the COVID‑19 crisis, it is expected that as soon as the economic recovery begins, the demand will increase and the prices will tend to rise. As for geopolitical tensions and interests, it is more complicated to forecast. We recently saw how statements by President Trump with threats to Iran caused the US WTI and European Brent oil prices to rise.

But it must be kept in mind that very low oil and gas prices for too long end up benefiting neither side. Therefore, as the prices are controllable by the supply side, in the medium‑long term the rise in prices seems clear.

At AleaSoft, the gas demand and price forecasting models are updated daily in all horizons from short to medium and long term. During this COVID‑19 crisis, the forecast reports are updated, which are always made with the most recent data and with the most probable scenarios. The gas market prices will be added shortly to the Energy Markets Observatory on its website.