The European electricity demand starts to recover, the fuels are at historical lows

AleaSoft, April 27, 2020. After the lows of Easter, the European electricity demand starts to recover as some countries begin to lift the confinement measures to control the expansion of the coronavirus. On the other hand, the Brent oil and TTF gas futures are at historical lows due to the fall in global demand, the oversupply and the shortage of storage capacity.

The last week ended on Sunday, April 26, with a higher solar energy production than the previous week in the markets of Germany and Spain, 17% and 14% respectively. In Germany on April 22 the highest daily production so far this year, of 262 GWh, was reached. On the contrary, in the markets of France, Italy and Portugal the production with this technology decreased. The greatest decrease was registered in France with a 17% lower production.

In the first 26 days of April, the solar energy production was higher, compared to the same days of 2019, in all the markets analysed at AleaSoft. The largest year‑on‑year increases occurred in Italy, with an increase of 48% and in Spain with an increase in production of 44%. 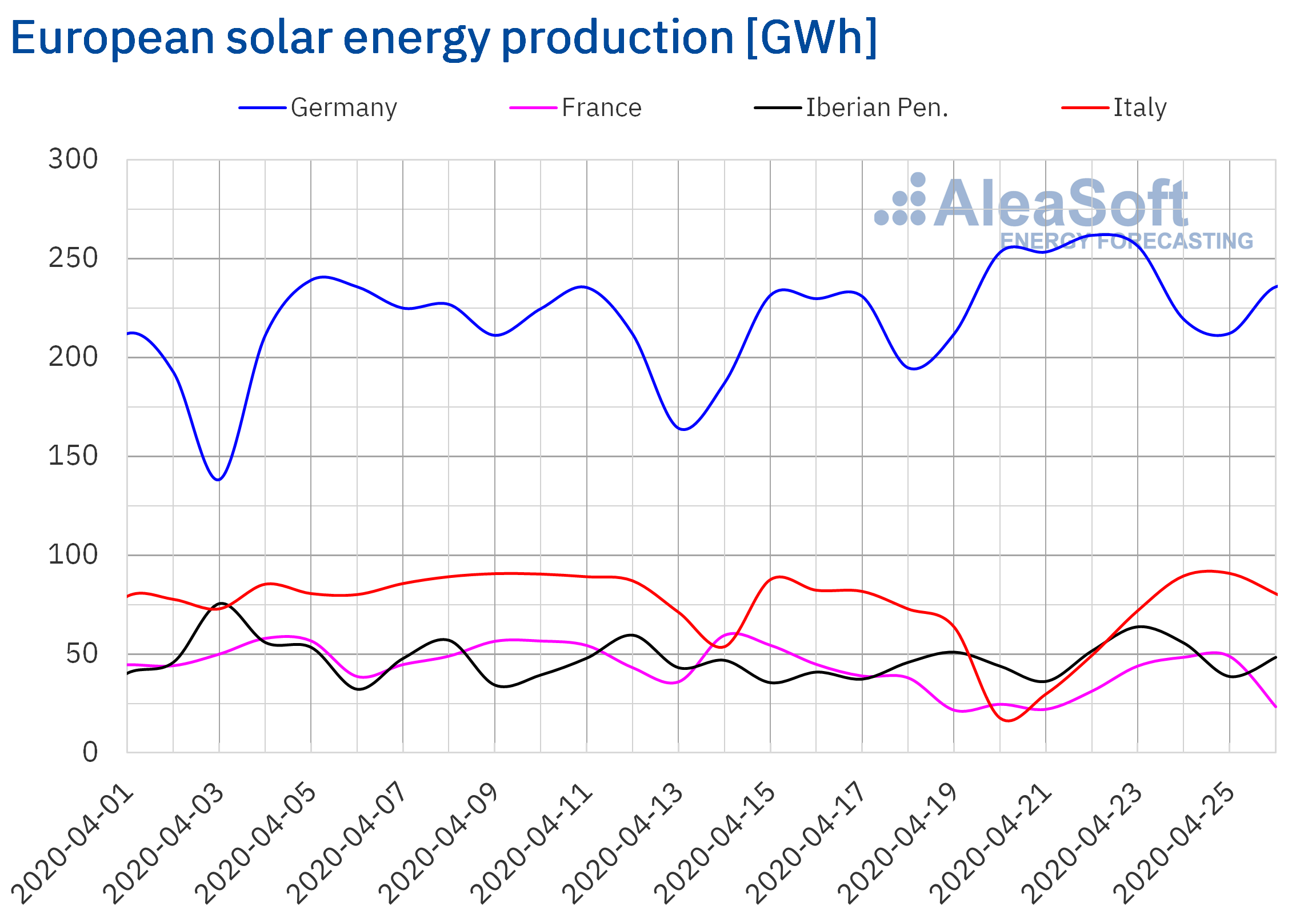 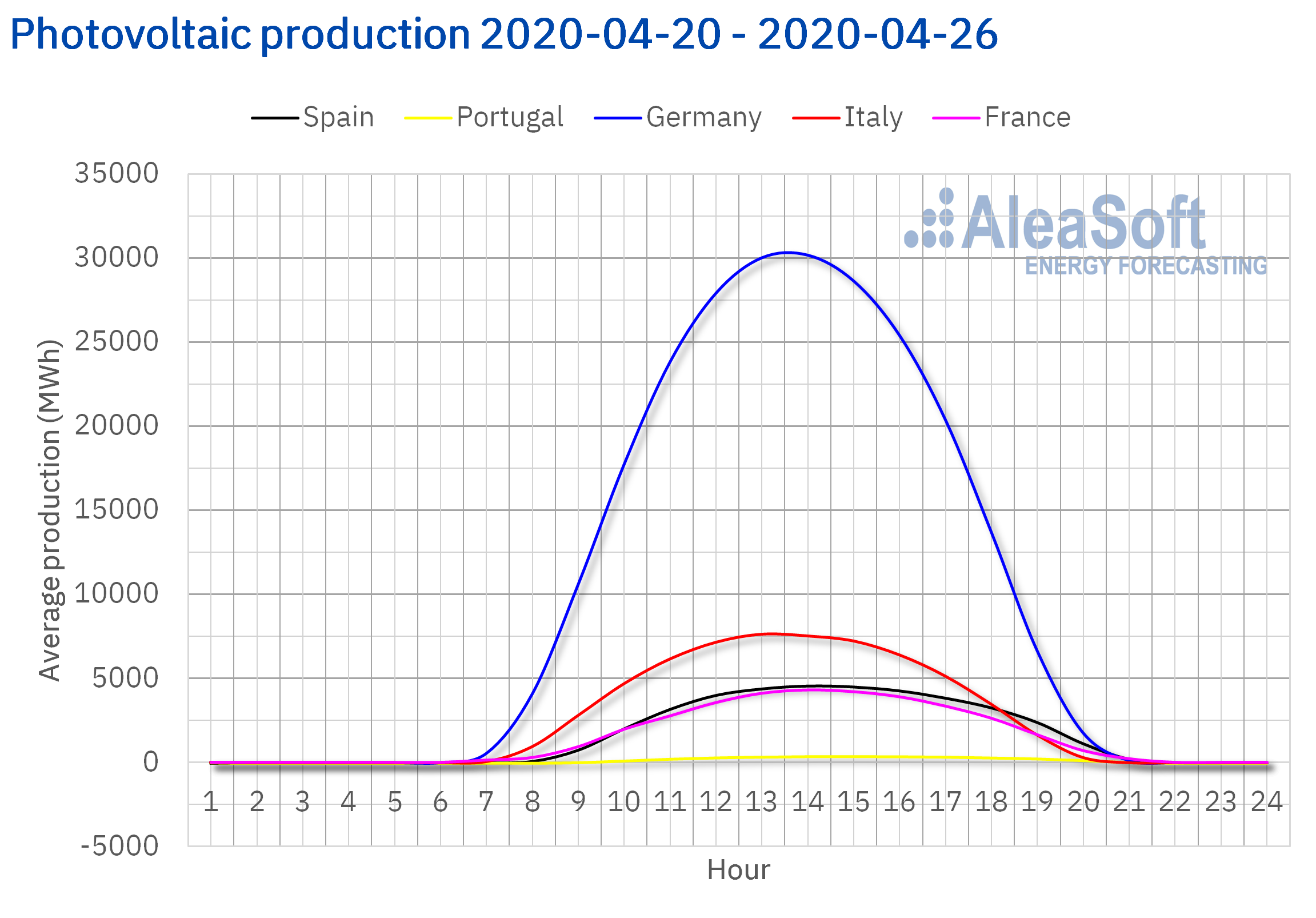 The wind energy production decreased last week by 30% in the Iberian Peninsula with a 60% drop in production in the Portuguese market. In the MIBEL market observatory for Spain, a strong decrease in production can be observed in the middle of the week and how this lower level, compared to the previous week, was maintained the rest of the week. 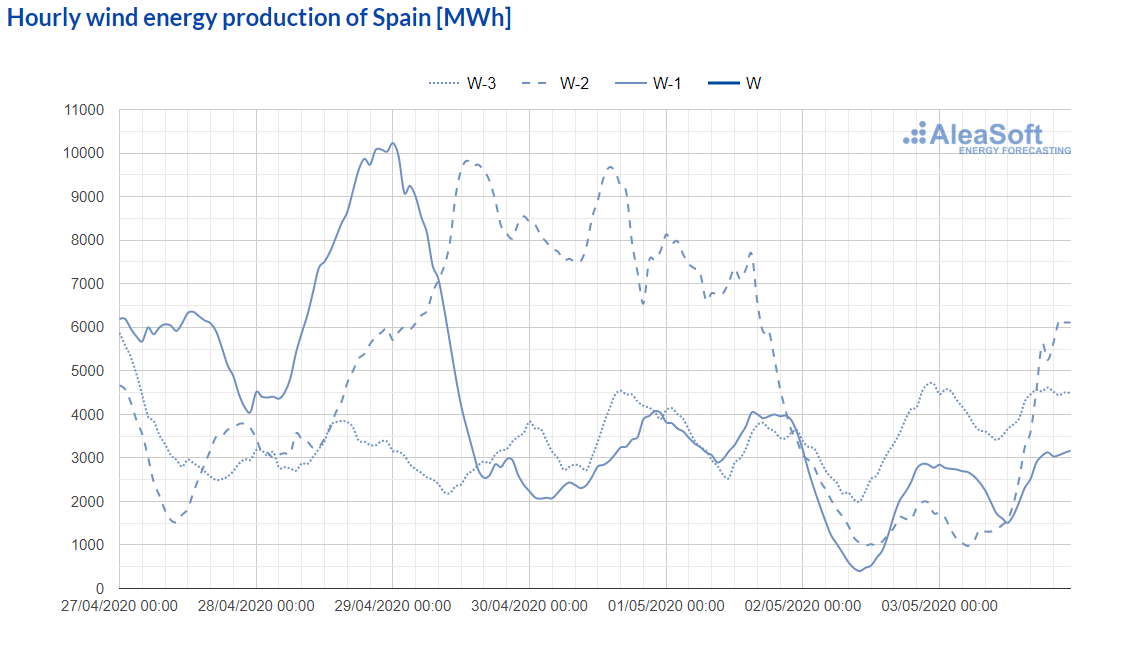 In the rest of the markets analysed at AleaSoft, the drop in production of almost 30% compared to the total of the previous week in France also stands out. On the contrary, there were increases in production in the German and Italian markets of 26% and 8.2% respectively.

In the year‑on‑year comparison, the fall in production was homogeneous with values between ‑1.5% and ‑36% during the first 26 days of April compared to the same days of April of last year. For this week the AleaSoft‘s wind energy production forecasting indicates a decrease in production in the German market. On the contrary, an increase is expected in the rest of the analysed markets. 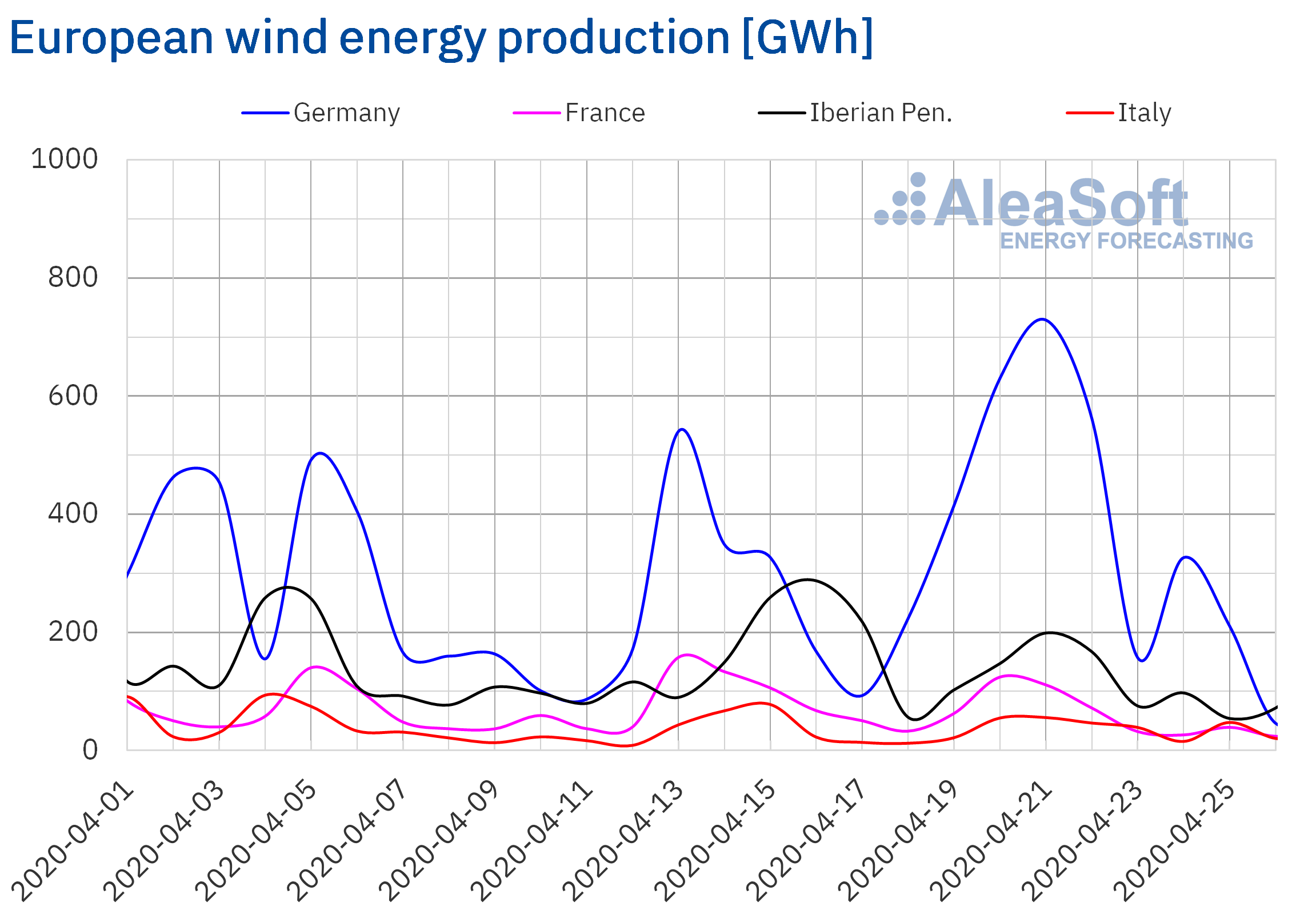 Over the past week, the electricity demand increased in Italy, Germany, Spain, Belgium, Portugal and France compared to the previous week despite the increase in average temperatures during the week. The Easter Monday holiday that was celebrated the previous week in most markets and, in some cases, the reduction of restrictions to combat the spread of the COVID‑19 are among the main factors that influenced this increase. 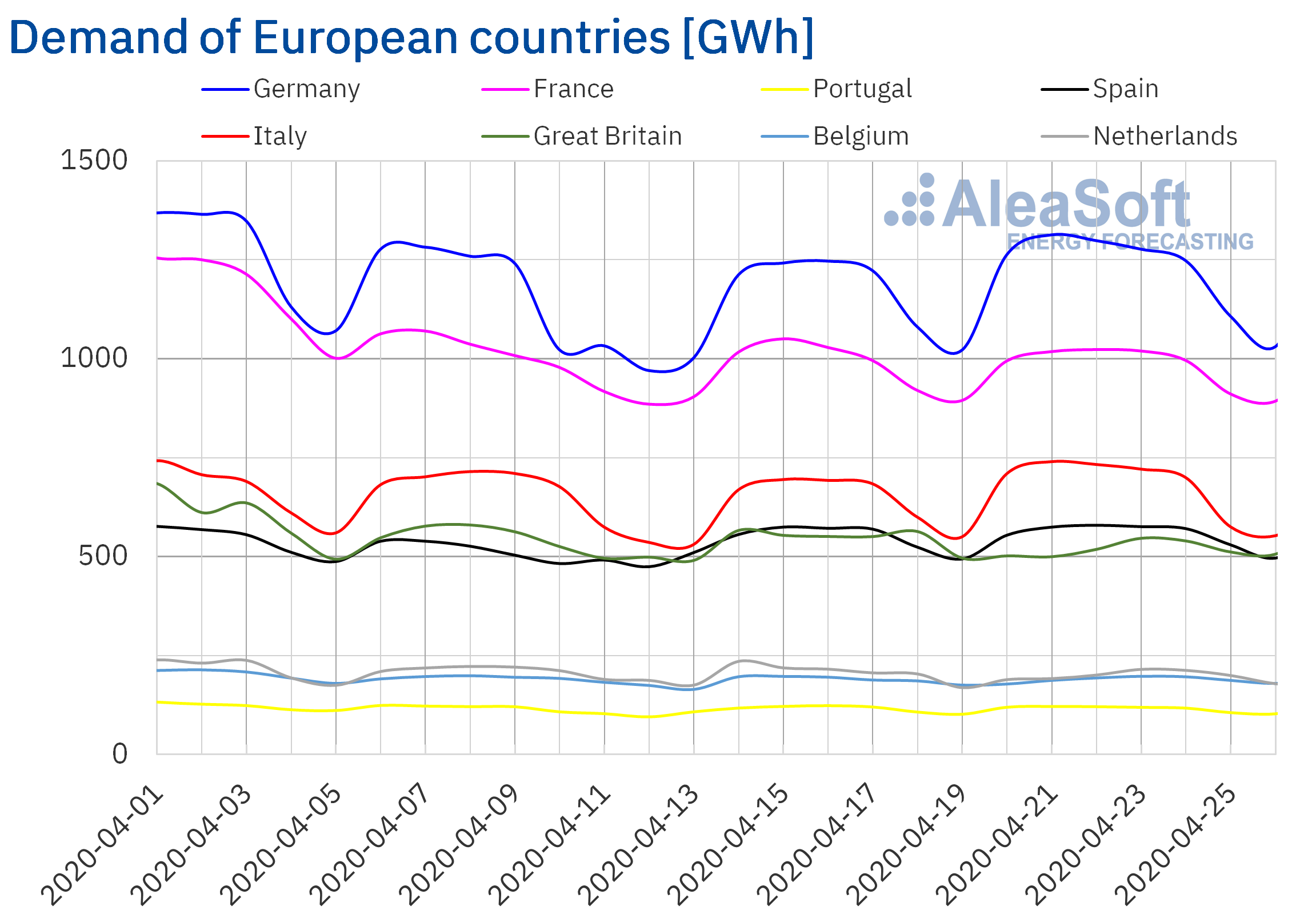 The greatest increase in demand was registered in Italy, which ended the week with an increase of 7.0% compared to the previous week. Also noteworthy is the 6.3% increase in German demand that began the partial lifting of the restrictions taken to combat the coronavirus on April 20. It should also be noted that by contrast in Great Britain it fell by 3.9%, where the UK Prime Minister, Boris Johnson, warned that there will be no rapid lifting of the restrictions in the country. 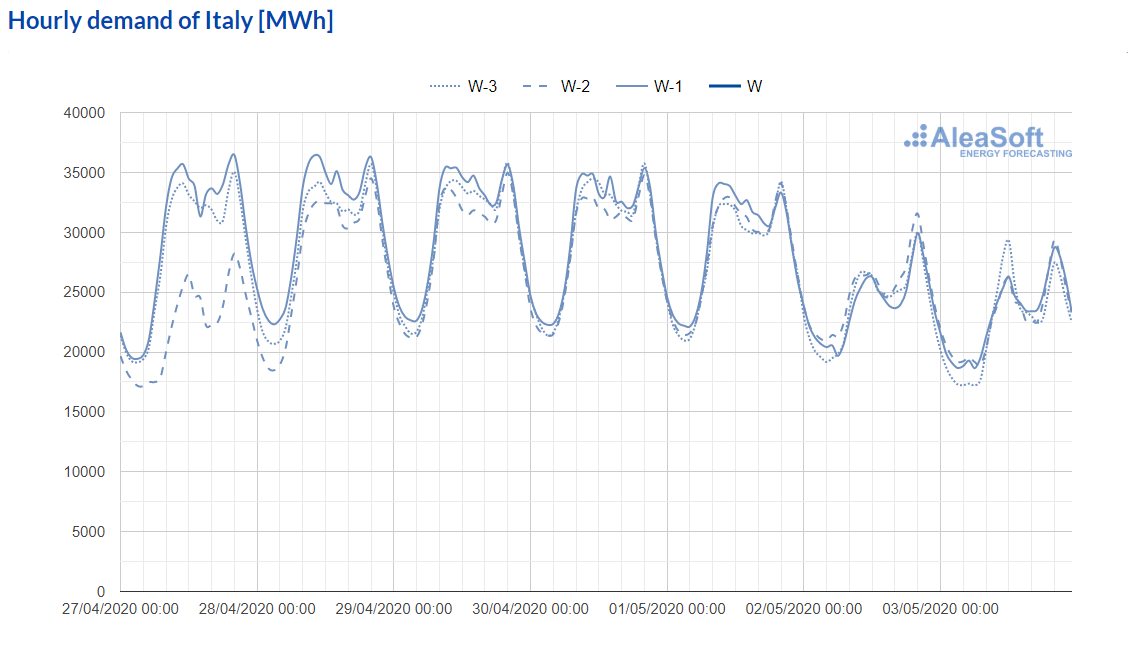 At the AleaSoft’s observatories it is possible to see all the changes occurred in the last weeks with values that are updated daily.

In some European countries, the confinement measures are gradually being relaxed, so the electricity demand is expected to recover.

However, negative daily average prices were only reached on Tuesday, April 21, in the EPEX SPOT markets of Germany and Belgium, with values of ‑€16.15/MWh and ‑€14.99/MWh, respectively. In the German market, that day at the hour 15, an hourly price of ‑€83.94/MWh was registered, which is the lowest since June 2019. 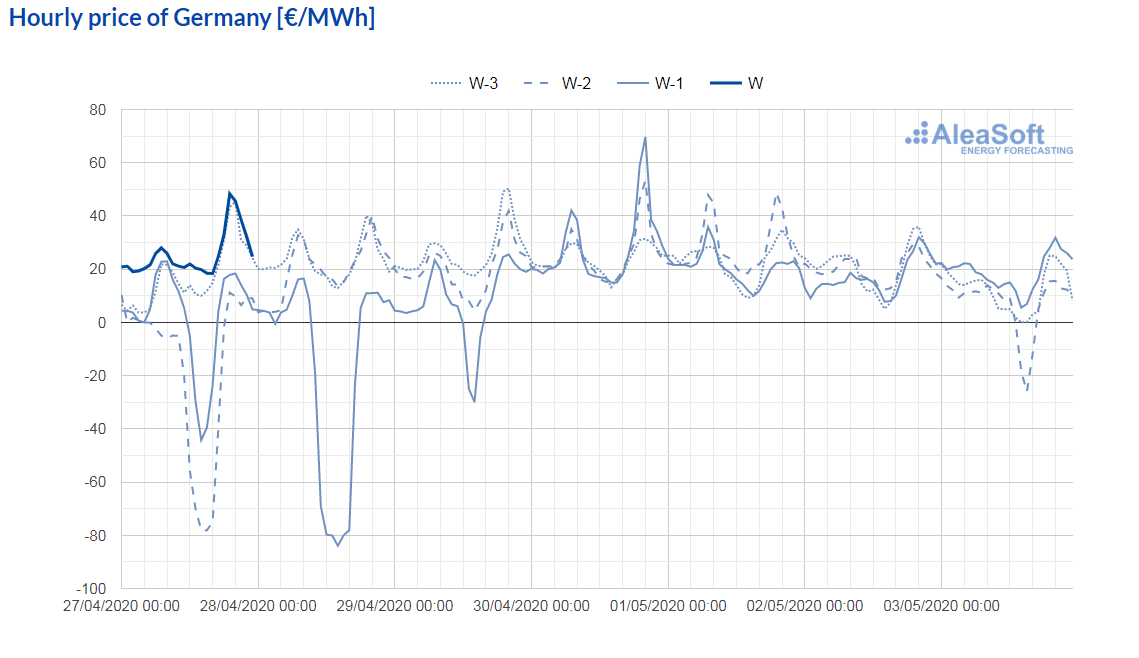 The behaviour of the prices of the European electricity markets during the past week was influenced by the high renewable energy production in most countries at the beginning of the week. 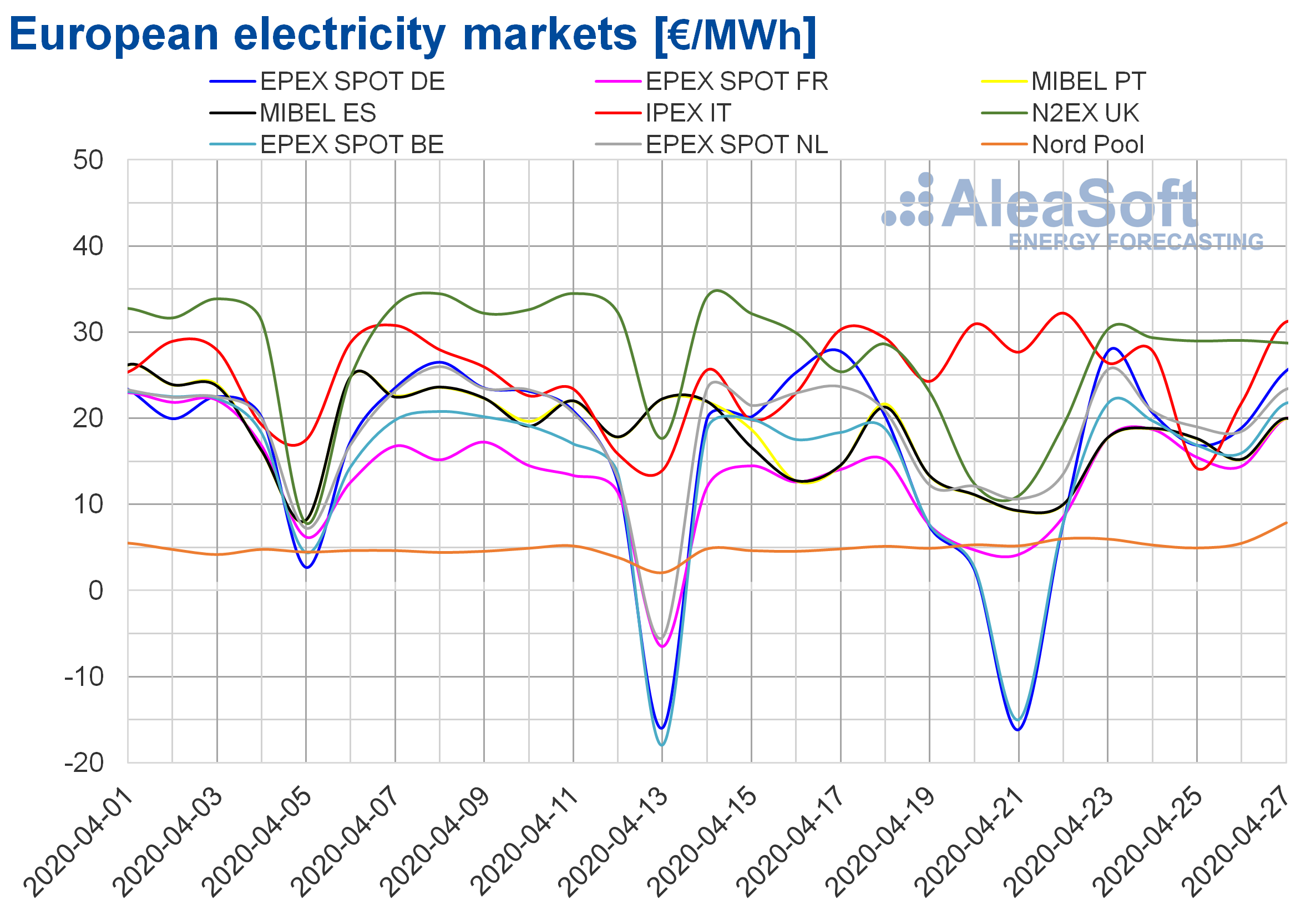 The AleaSoft’s price forecasting indicates that this week the prices will increase in most of the analysed European markets, especially in the German market where a significant decrease in renewable energy production is expected.

During the last week of April 20, 2020, the electricity futures prices for the product of the next quarter registered decreases in all the European markets analysed at AleaSoft. The prices of the ICE and NASDAQ markets of the Nordic countries were positioned at €8.09/MWh and €8.10/MWh respectively in the session of April 24, which represents for the ICE market a drop of almost a quarter of the price of the previous week. On the other hand, the EEX market of France is the one that registered the least change, a difference of €0.06/MWh that represented a decrease of 0.2%.

As for electricity futures prices for 2021, the picture is very similar, except that in this case the decline is not general. The EEX market of France, which was the one with the least change in the quarterly product, in the case of this annual product is the only one that registered a rise, of 0.3%. In the rest of the markets the decreases were all more than 3%. The NASDAQ market of the Nordic countries was the one with the greatest drop, with ‑7.9% compared to the settlement price of April 17.

The Brent oil futures for the month of June 2020 in the ICE market on Tuesday, April 21, reached a historical low settlement price of $19.33/bbl, after falling 24% from Monday’s price. The rest of last week the prices gradually recovered until settling at $21.44/bbl on Friday. This price was still 24% lower than that of Friday of the previous week.

The abrupt drop in prices of the Brent oil futures of last Tuesday was influenced by the fall in prices of the West Texas Intermediate oil futures, the benchmark in the United States. The US futures for the month of May, on Monday, April 20, reached a negative settlement price for the first time in its history, of ‑$37.63/bbl, due to the imminence of its expiration in a context of very low demand levels because of the coronavirus crisis and low storage capacity, which were not accompanied by reductions in production.

Despite the recovery in the last days of last week, the situation of low prices is maintained due to the low levels of demand related to the measures taken worldwide to curb the expansion of the coronavirus and the progressive reduction of the scarce space still available for the storage of unconsumed oil.

The reductions in production agreed by the OPEC+ are planned for the beginning of May, although some countries already started to cut their production. This was the cause of the slight recovery late last week. But, taking into account the levels of reduction in demand due to the coronavirus crisis and the high levels of the reserves, these reductions will probably not be enough to stabilise the prices, especially if there are new outbreaks of the disease that force the return to stricter confinement situations in areas where the economic activity is beginning to recover.

The TTF gas futures prices in the ICE market for the month of May 2020 fell throughout the past week until reaching a settlement price of €5.77/MWh on Friday, April 24. This price is 17% lower than that of the previous Friday and the lowest in the last two years.

Regarding the TTF gas in the spot market, the index prices fell by €1.28/MWh during the past week, from €6.80/MWh of Monday, April 20, to €5.51/MWh of the weekend. This value is below the historical lows registered in October 2009. On the other hand, today there was a slight recovery to €5.55/MWh.

On the other hand, the API 2 coal prices in the ICE market for the month of May 2020 fell almost every day last week, except Thursday when they increased 0.2% compared to the previous day. Despite this slight recovery, the declines returned on Friday and the settlement price of Friday, April 24, was $41.10/t. In this case, the decrease compared to the settlement of the previous week, of 10%, was less than in the case of gas futures. Still, the Friday’s price was the lowest in the last two years. Prices below $40/t were registered today.

Regarding the CO2 emission rights futures in the EEX market for the reference contract of December 2020, last week the prices ranged between €21.38/t of Monday, April 20, and €19.86/t of Tuesday, April 21. Although the last week’s maximum price was lower than that of the previous week, of €21.70/t, the last week’s average, of €20.73/t, was 1.5% higher. The announcement of reductions in the French nuclear energy production due to the extension of the scheduled shutdowns for maintenance at the plants favoured this increase. The decline in nuclear energy production in the coming months may partially offset the decline in demand due to the coronavirus crisis. 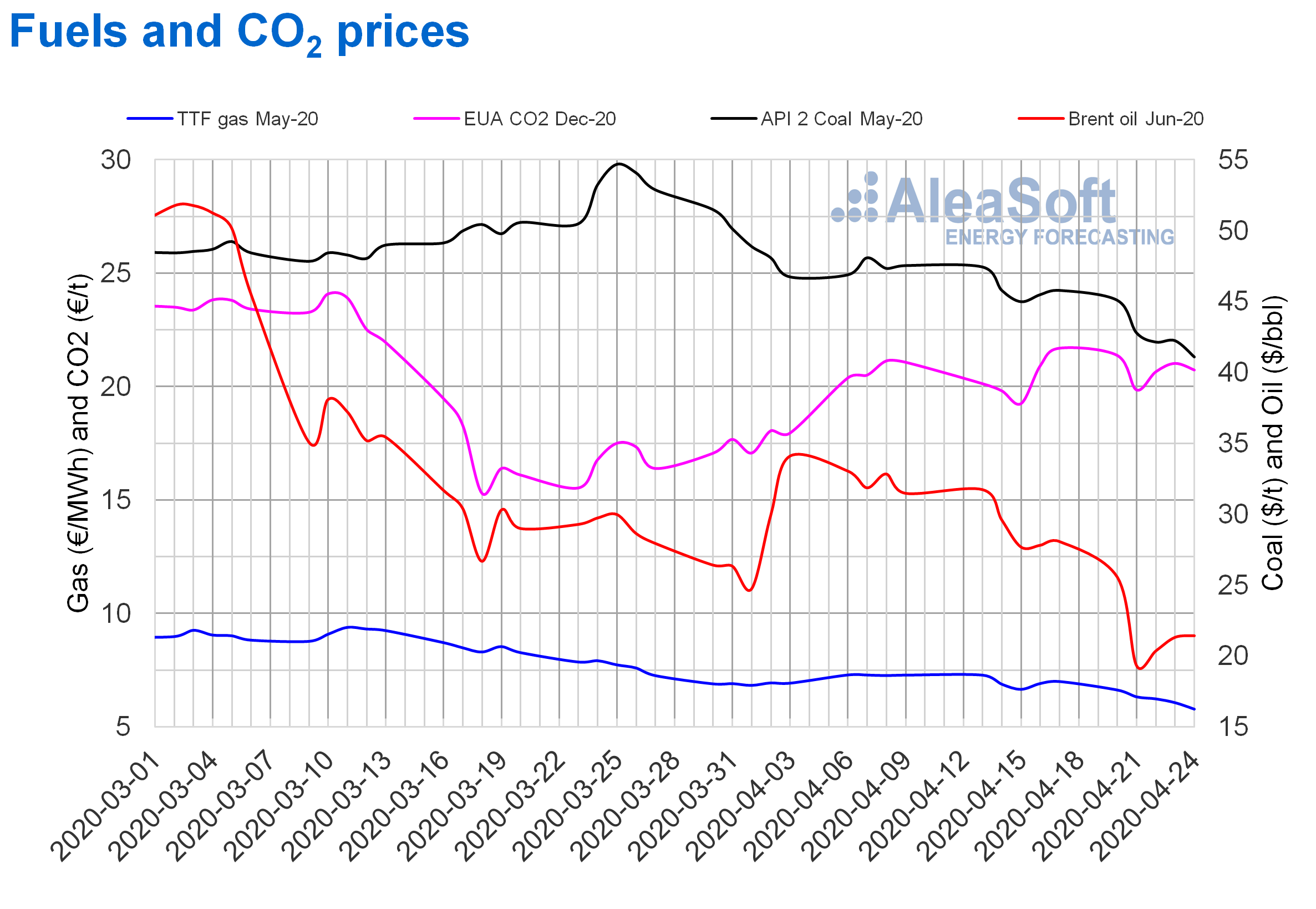 On the AleaSoft website, an observatory of the main European electricity markets was created where it is possible to analyse the behaviour of the demand and the prices of the main European electricity markets in recent weeks with daily updated data. In the case of the Spanish market, the analysis of the wind, solar photovoltaic and solar thermal energy production is also available at the observatory.

On the other hand, the next May 21, the Webinar on the “Influence of coronavirus on electricity demand and the European electricity markets. (II)” will be imparted, in which the following topics will be covered: