The VI Solar Forum of the UNEF: An ideal framework to continue advancing in the photovoltaic revolution

AleaSoft, October 24, 2019. The VI Solar Forum organised by the UNEF was held in Madrid on October 22 and 23 and once again it was an ideal framework to discuss opinions and points of view that allow continuing advancing in the current Photovoltaic Revolution. In this article, AleaSoft details the main points exposed during its participation in the table “Alternative development of a photovoltaic plant: key elements in decision making”.

The VI UNEF Solar Forum, which was held on October 22 and 23 in Madrid and whose slogan was “The main element of photovoltaic energy model”, ended yesterday. From AleaSoft, which participated and sponsored the event, we send our congratulations to UNEF for the organisation of the event and for the work they do every day to enhance the development of the photovoltaic sector in Spain. 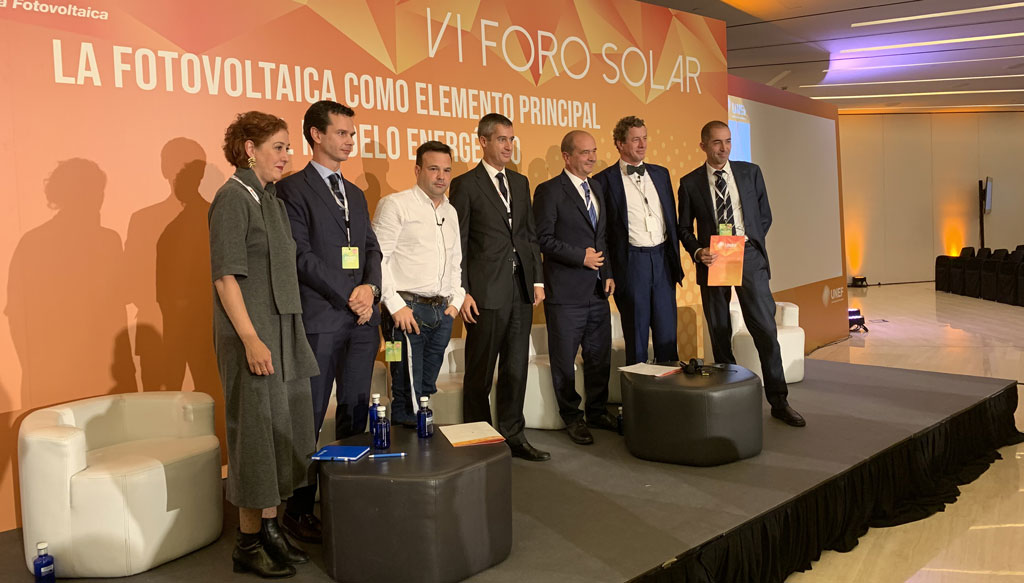 The current situation, in which the Photovoltaic Revolution is increasingly palpable, now that the photovoltaic energy is taking momentum and its installed capacity in Spain increased so far this year, until September 2019, by 33% according to data published by REE, as well as the good prospects for the coming years, marked the general nature of the event and in particular the different debates that took place during the two days.

Antonio Delgado Rigal, CEO of AleaSoft, participated in the table “Alternative development of a photovoltaic plant: key elements in decision making” that took place yesterday October 23, in which he had the opportunity to give his point of view on such an important topic in the current context of the photovoltaic industry.

The table highlighted the importance of having a vision of the future for the development of a photovoltaic plant. On this aspect Antonio commented that, for 20 years, AleaSoft has been making forecasts based on Artificial Intelligence for the 20 most important companies in the Spanish electricity sector and contributing to their digitalisation, and that these companies demonstrate their satisfaction by consecutively renewing their confidence in the Spanish consultant every year.

According to Antonio, four points must be taken into account for the development of a solar plant and for decision making: information, forecasts, probabilities and optimisation.

As for the information, the history, what is happening in Spain and the rest of Europe in the electricity market, in the auctions of renewable energies held and the future ones, in the economy, as well as its impact on the electricity demand, in the fuel markets, etc. must be taken into account. 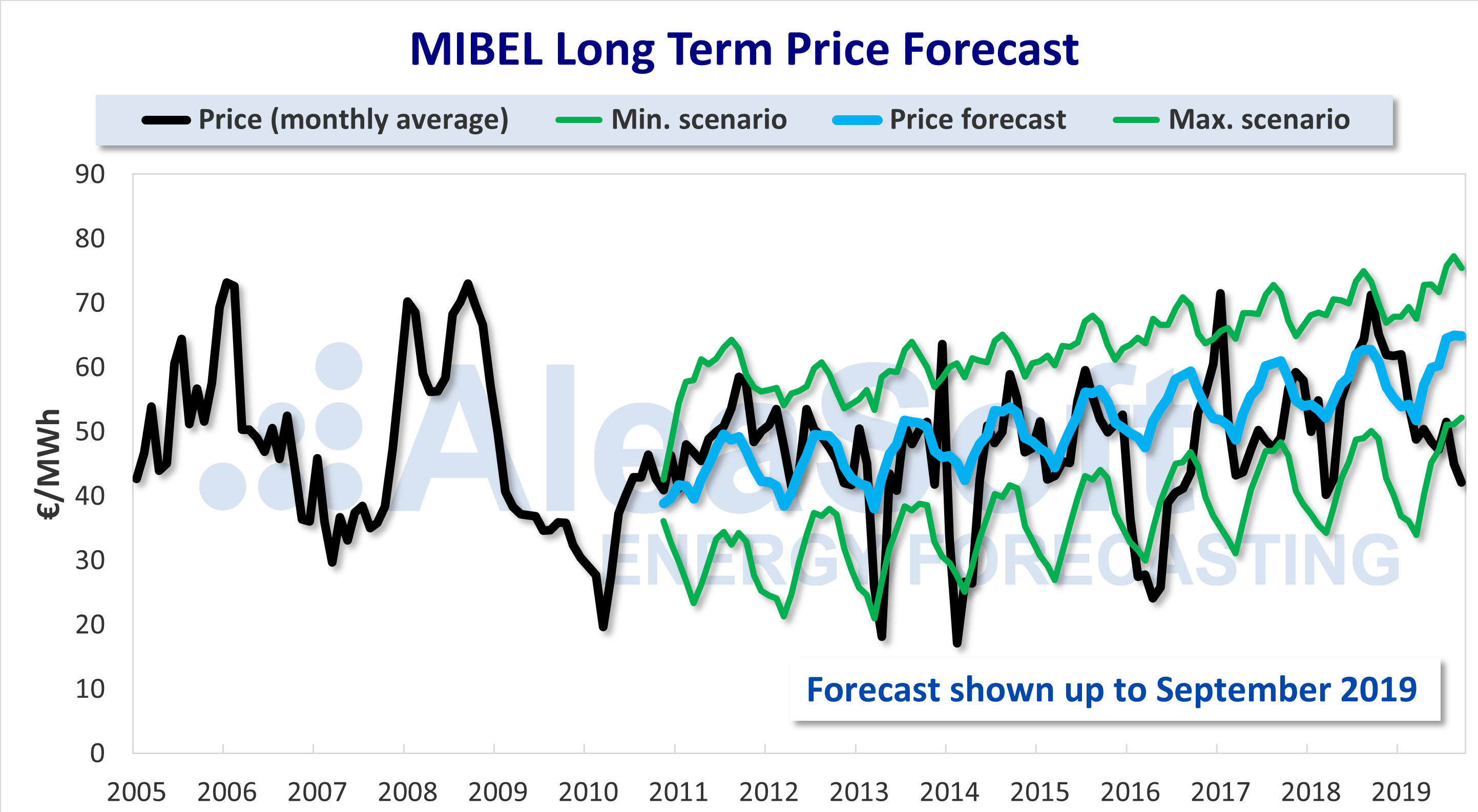 It is also important to manage the uncertainty by providing forecast probabilities. Questions like “How likely is it that in 2025 the price will be less than €20/MWh or greater than €50/MWh?”  are crucial for decision making. The probabilities of the forecast are calculated taking into account different scenarios of the variables that affect the market price: fuel and CO2 emission rights prices, hydroelectric, nuclear, solar, wind energy production, etc. 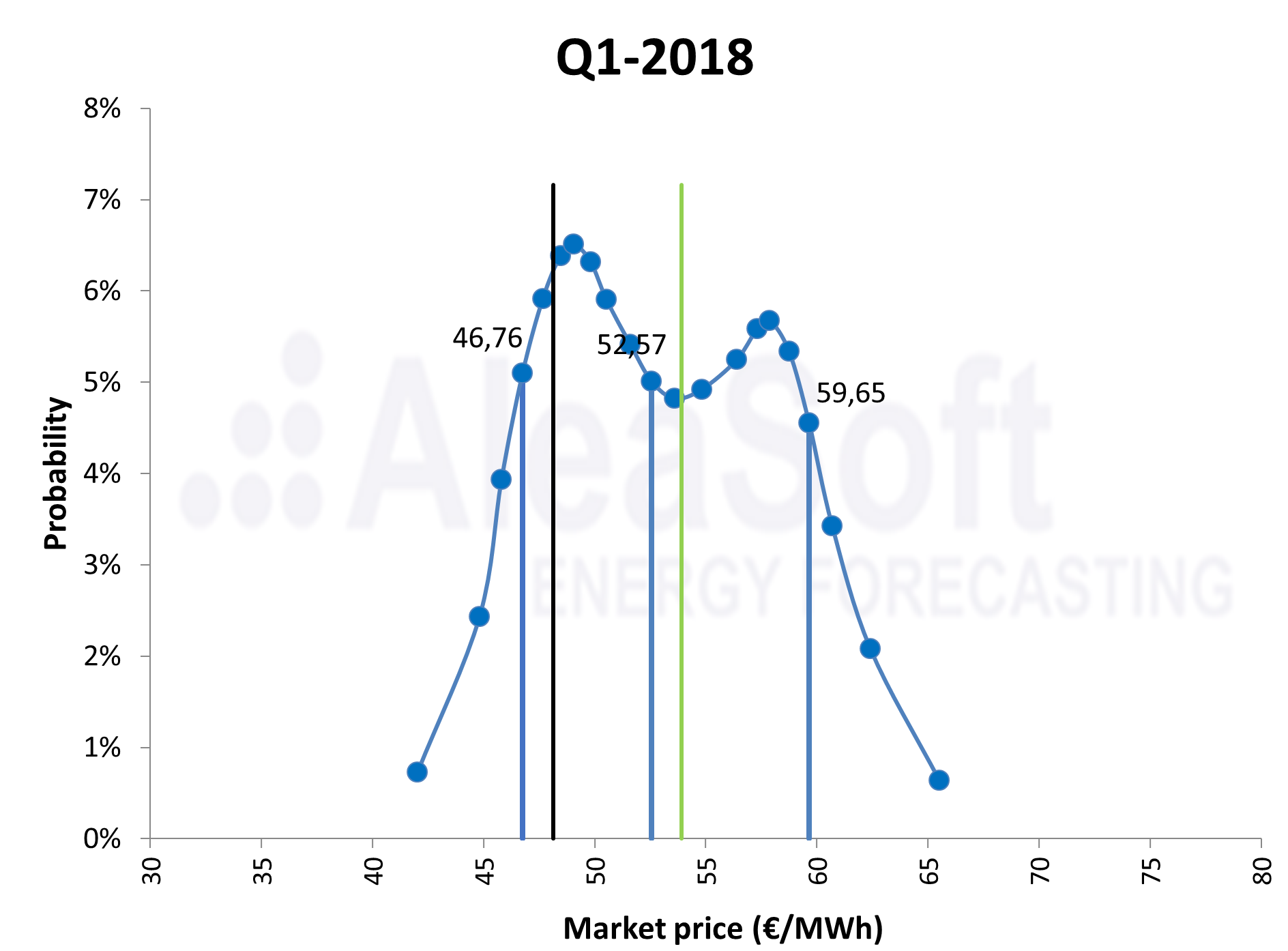 Probabilistic forecast of the MIBEL market price generated by AleaSoft in mid 2017.

Antonio’s fourth point, optimisation, is about analysing how to optimally combine the plant’s operating options taking into account the information, the forecasts and their probabilities. This can be done by combining with batteries, producing hydrogen, using different mechanisms for the energy sale, for example, 40% through PPA and 60% on the market, etc.

The electricity market price forecasts must be scientific and consistent. The models must capture the market equilibrium in the past and propagate it into the future. According to Antonio, the market equilibrium will continue to exist as long as the marginalist market exists, which will remain at least another 20 years. The AleaSoft methodology, with proven quality for 20 years, combines Neural Networks, SARIMA models and regression. In addition, the forecasts offered by the company depend on about 15 explanatory variables. In summary, AleaSoft‘s forecasts are based on market equilibrium, a scientific model and the explanatory variables to probabilistically quantify the price in the different horizons. New situations that may occur in the future of which there is no history are also taken into account.

Another issue discussed at the table was whether or not to use renewable auctions to finance new projects. For Antonio, the market is fundamental. If there were no auctions the market would work better. The auctions can be important on the islands or in other specific situations. If a photovoltaic generator needs to guarantee a future price, it can search for an offtaker and sign a long‑term PPA contract.

For AleaSoft, the Solar Forum was once again an ideal framework for discussing opinions and points of view, as well as for feedback with new elements that allow it to continue working as Spanish leaders in the field of the forecasts in the energy sector.

PrevAnteriorSecond period of the Spanish electricity market (2009-2014): The economic crisis
SiguienteThe fall of the solar and wind energy production increases the prices of the electricity marketsNext
Facebook-f Twitter Linkedin Instagram