The first years of the Spanish electricity market (1998-2008): an expansion period

AleaSoft, October 17, 2019. AleaSoft analyses the Spanish electricity market in its early years until the beginning of the crisis, from 1998 to 2008, as part of a series of articles on the market, to celebrate the 20th anniversary of its foundation as a leader in the forecast field for the sector. This period was characterised by the increase in the demand and the installed capacity of combined cycle gas turbine and wind energy. The price of the fuels grew during this stage, in which the CO2 emission rights market also emerged.

On October 8, AleaSoft celebrated 20 years as a leading company in the field of forecasts for the energy sector. To celebrate it, the consultant is publishing a series of articles on the Spanish electricity market, one of the markets in which it specialises. A few days ago, it published an article describing the operation of the market and the following articles will focus on the analysis of different periods. On this occasion the analysis of the first years of the market is carried out until the beginning of the economic crisis, between 1998 and 2008. The analysis is focused on the behaviour of the market prices, the electricity demand, the installed capacity and the production by technologies, the international exchanges and the fuels and CO2 prices.

The prices of the Spanish electricity market increased gradually since it came into operation in 1998. The variations in the market prices during the period from 1998 to 2008 were closely related to the behaviour of the hydroelectric energy production, of the thermal gap, of the prices of the main fuels for electricity generation, gas and coal, and the prices of the CO2 emission rights.

In 2002, the 1.9% increase in the electricity demand, together with the largest drop in the hydroelectric energy production recorded in the analysed period, of 48%, increased the electricity market prices, which closed with a annual average of €37.48/MWh, €7.41/MWh higher than the previous year. The following year, in 2003, the recovery of the hydroelectric energy production, of 89%, caused the average price for that year to register the most significant drop in this first half of the market’s history, of 23% compared to the previous year.

The largest annual increase in the market prices was registered in 2005, coinciding with the CO2 emission rights market getting into operation. In that year, the average price was €53.68/MWh, 92% above the previous year. This increase was favoured by the 41% drop in the hydroelectric energy production, in addition to a 6.2% increase in the electricity demand, the increase in the fuel prices, mainly the gas, of 55%, also of the Brent oil price, which registered a 42% increase that year, and the strong influence that the CO2 emission rights market began to exert on the Spanish electricity market.

In the following years the price fell compared to 2005, with decreases of 5.9% and 22% for 2006 and 2007, following a slight recovery in the hydroelectric energy production and decreases in the CO2 prices of 3.6% and 28%, respectively. In 2007, the gas prices fell 27%, which also favoured the decline in the electricity market prices.

Almost at the beginning of the global economic crisis in 2008, after a 76% increase in the prices of the CO2 emission rights market and a 15% drop in the hydroelectric energy production, the Spanish electricity market prices suffered an increase of 64% over the previous year. This increase was also favoured by a significant increase in the fuel prices for electricity generation. In 2008, the gas prices increased 64% and the coal prices 61%. In the same context, the price of a barrel of Brent oil also increased by 34%. The average price for 2008 in the electricity market in Spain was €64.43/MWh, the highest value recorded since the market entered into operation until the end of 2018. Between the year of getting into operation, 1998, and ten years later when the most expensive year was recorded, 2008, the price grew 157%. 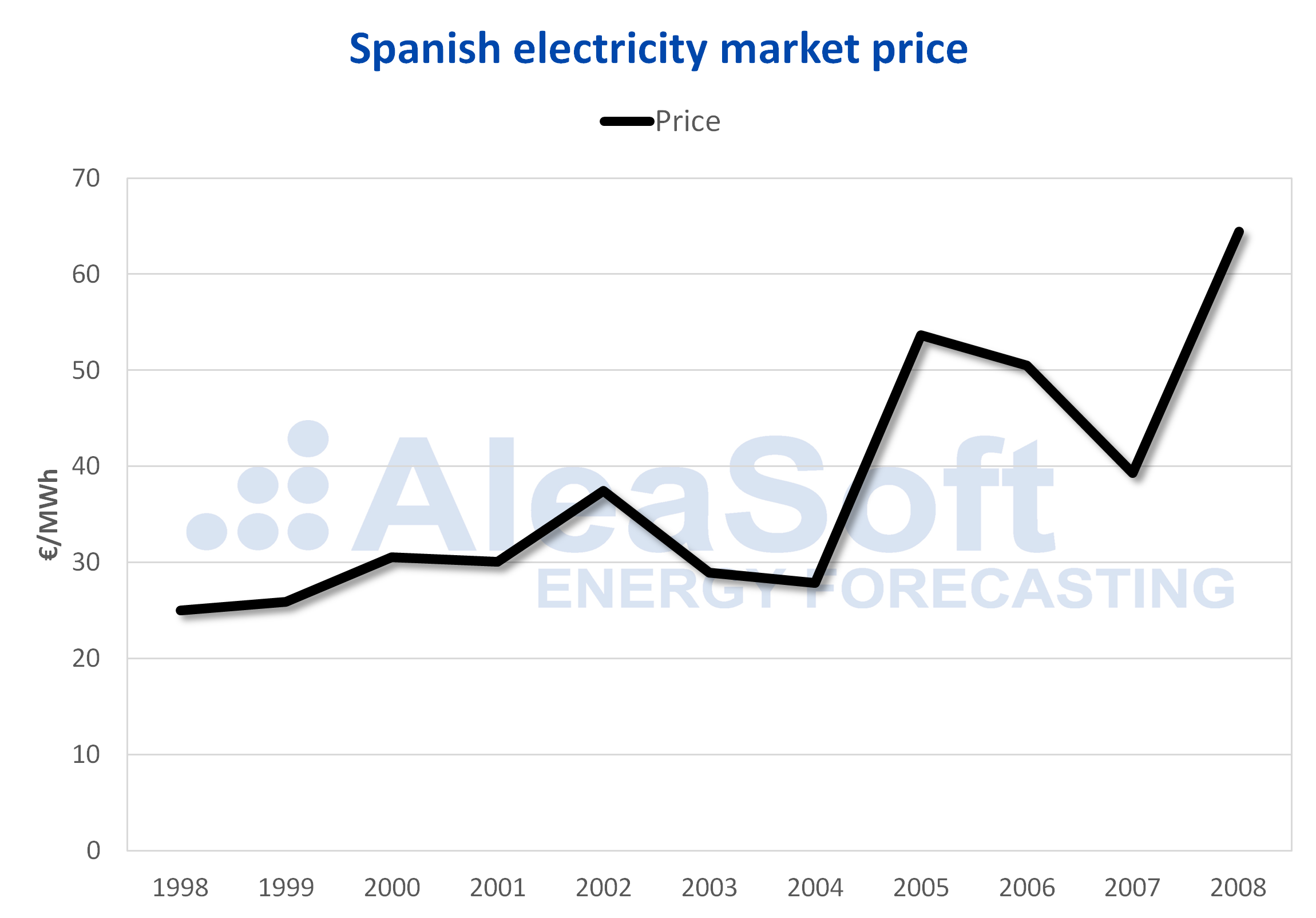 During the period between the beginning of the market until 2008, the consumer price index (CPI) increased by 39%. If we correct the market price with the inflation, the increase in the Spanish electricity market in that period falls from 157% to 86%. 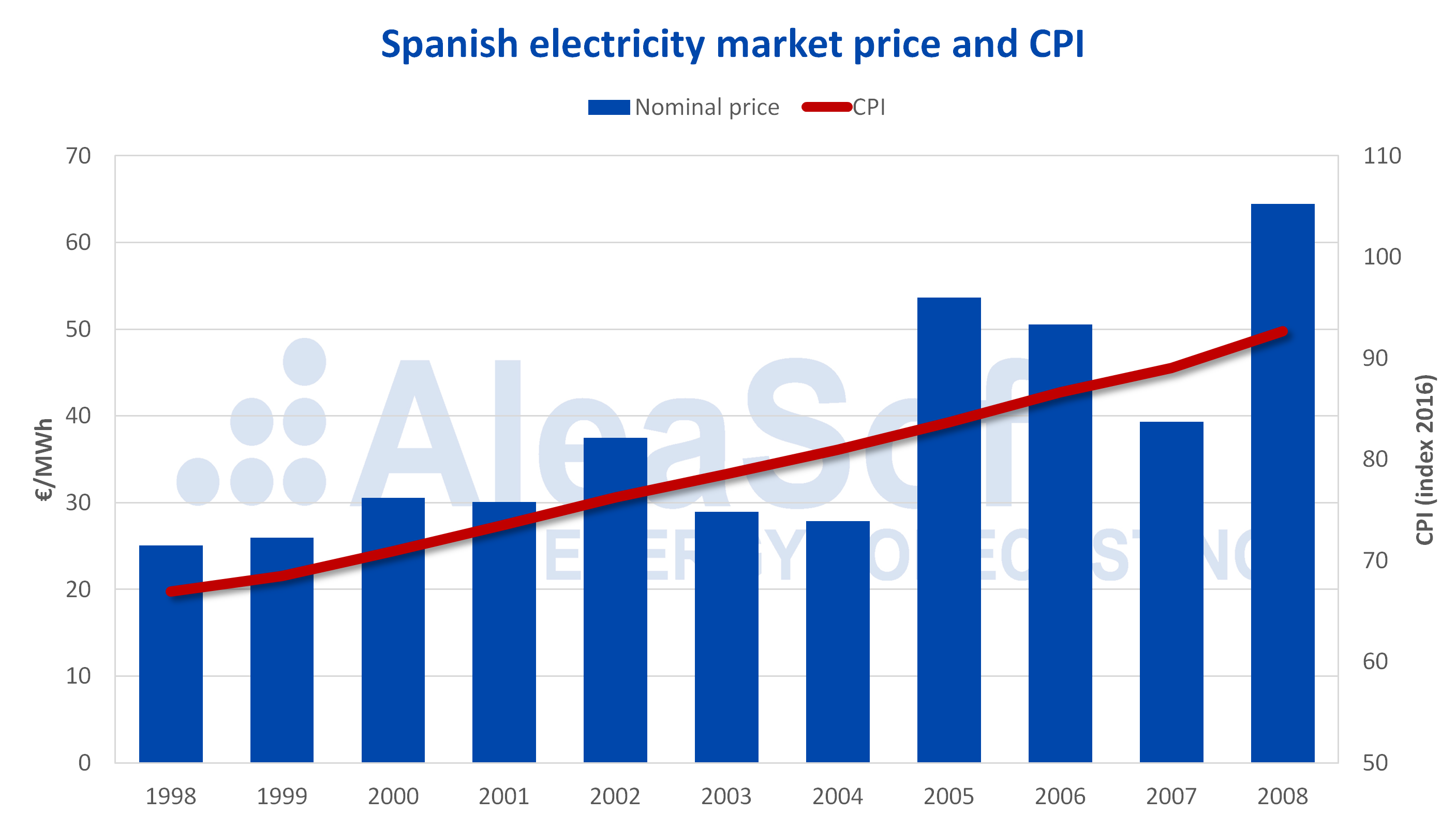 It must be taken into account that 1998 was the year with the lowest price, and that 2008 was a punctually expensive year where coincided a low hydroelectric energy production and a high price of a barrel of Brent oil and CO2 emission rights. If the market price trend during this period is analysed, eliminating year‑to‑year price fluctuations, the conclusion is that during this first half of the history of the Spanish electricity market the price rose 145%, which when corrected with inflation it drops to 68%. 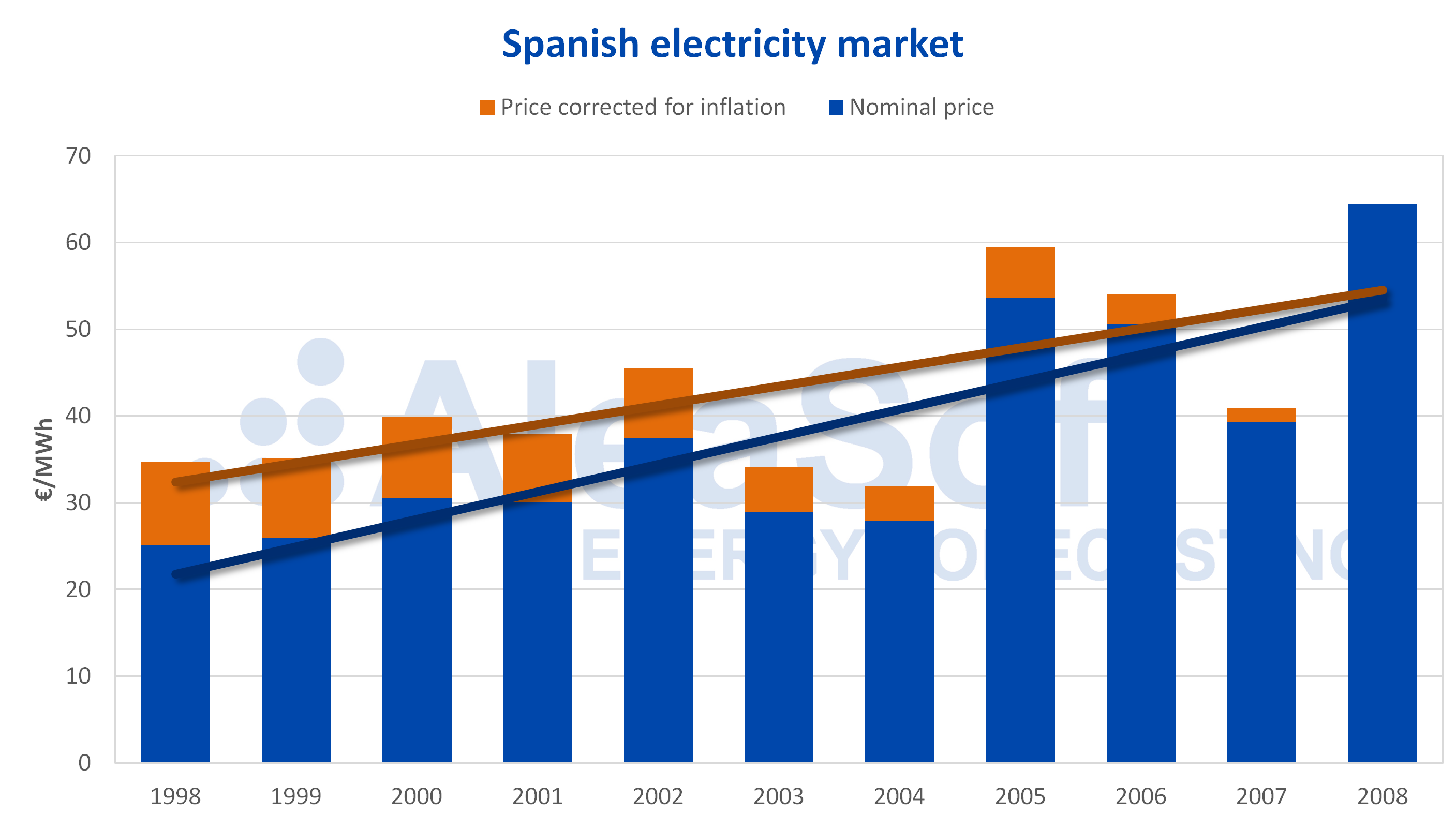 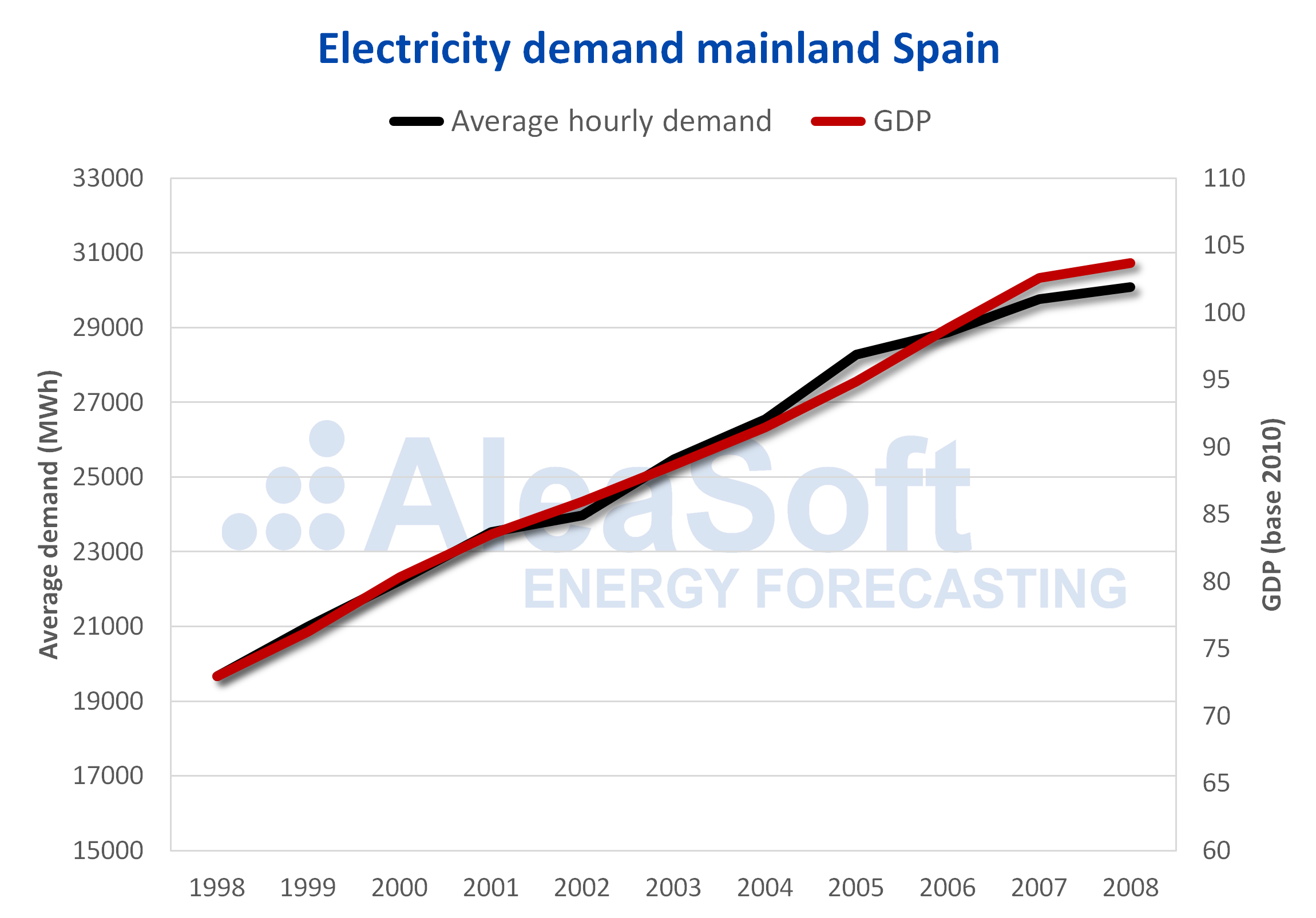 The greatest growth in the electricity demand, during the period from 1998 to 2008, was in the year 1998, with a variation of 7.9% compared to the previous year. The year 2008, in which the global economic crisis began, was the one with the lowest growth recorded of the analysed period, with a more moderate variation of 1.4%.

Installed capacity and energy production per technology in Mainland Spain

At the beginning of the analysed period, with the emergence of the electricity market, the set of technologies for the generation of electricity in Spain was quite diversified. In 1998 the main resource available for generation was the hydroelectric. The installed capacity of this technology, among its different variants: pumping, reservoirs and flow, reached almost 40% of all generation capacity in Spain. It was followed by coal generation, with 23% of the total capacity, and nuclear generation, with 16%. However, the technology that generated the most electricity in Spain was coal, followed closely by the nuclear energy.

Another source of renewable energy available that year was wind energy, but with a very discreet participation, since only 1% of the generation capacity was from this source. However, in the period 1998‑2008 an average of approximately 1.5 GW of wind power was installed in Spain each year. This growth rate was only surpassed by the installation of combined cycle gas turbine plants. Being a more efficient technology and with less environmental impact than traditional thermal generation, the combined cycle gas turbines debuted in the Spanish market in 2002, surpassing in installed capacity the generation with fuel and gas in just four years. During the period analysed, this was the fastest growing technology, with an average of more than 3 GW installed every year from 2002 to 2008. 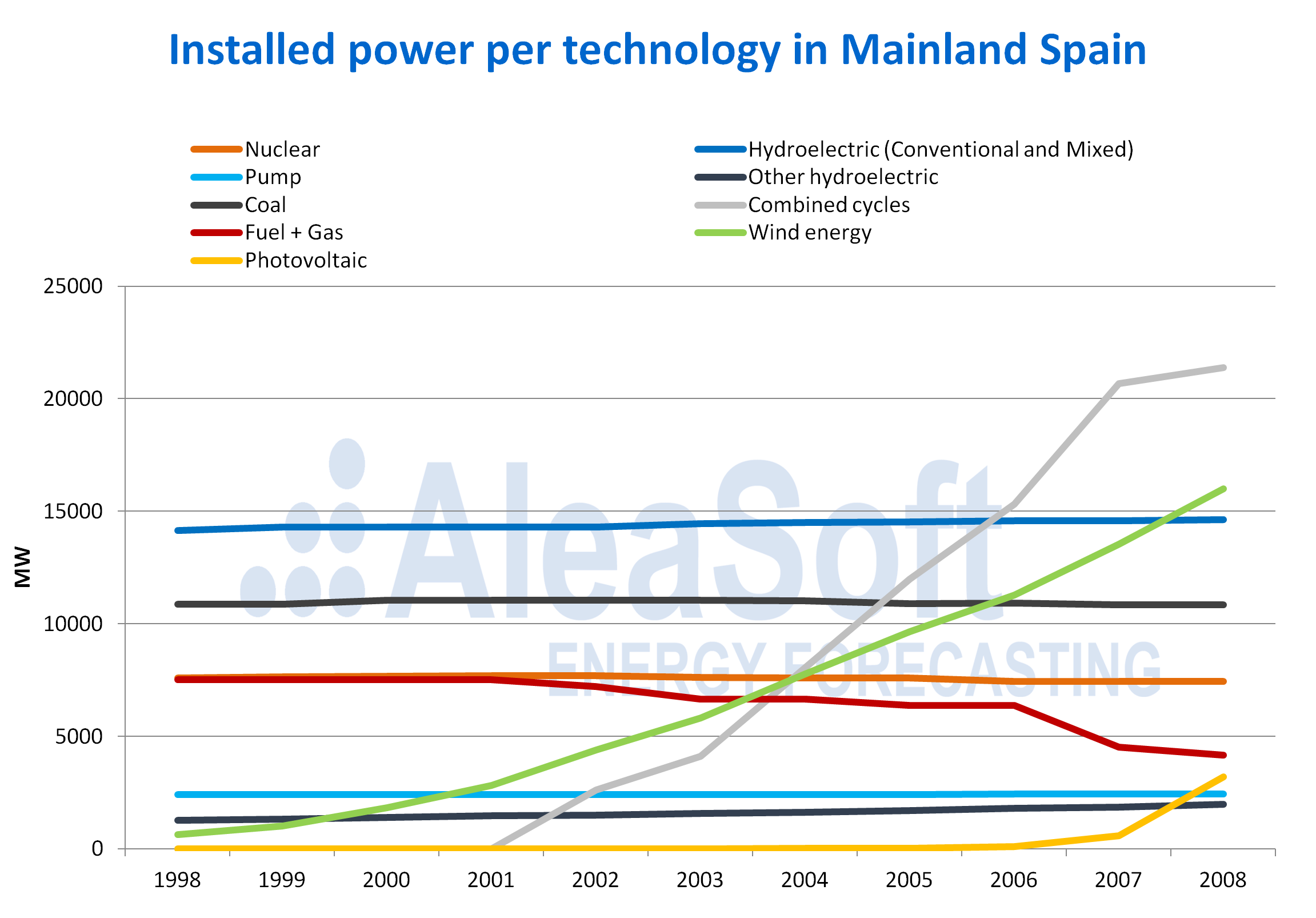 On the other hand, the total power of electricity generation in the Mainland Spanish system grew every year during the analysed period, most notably since 2002, coinciding with the entry of the combined cycle gas turbines. The Mainland Spain electricity system almost doubled its installed capacity from approximately 47.54 GW in 1998 to around 89.54 GW in 2008. The share of each technology in the electricity generation park in this period was also modified. The park went from being dominated by hydroelectric power to having a more equitable distribution among the main technologies in 2008: combined cycle gas turbine, hydroelectric and wind energy. 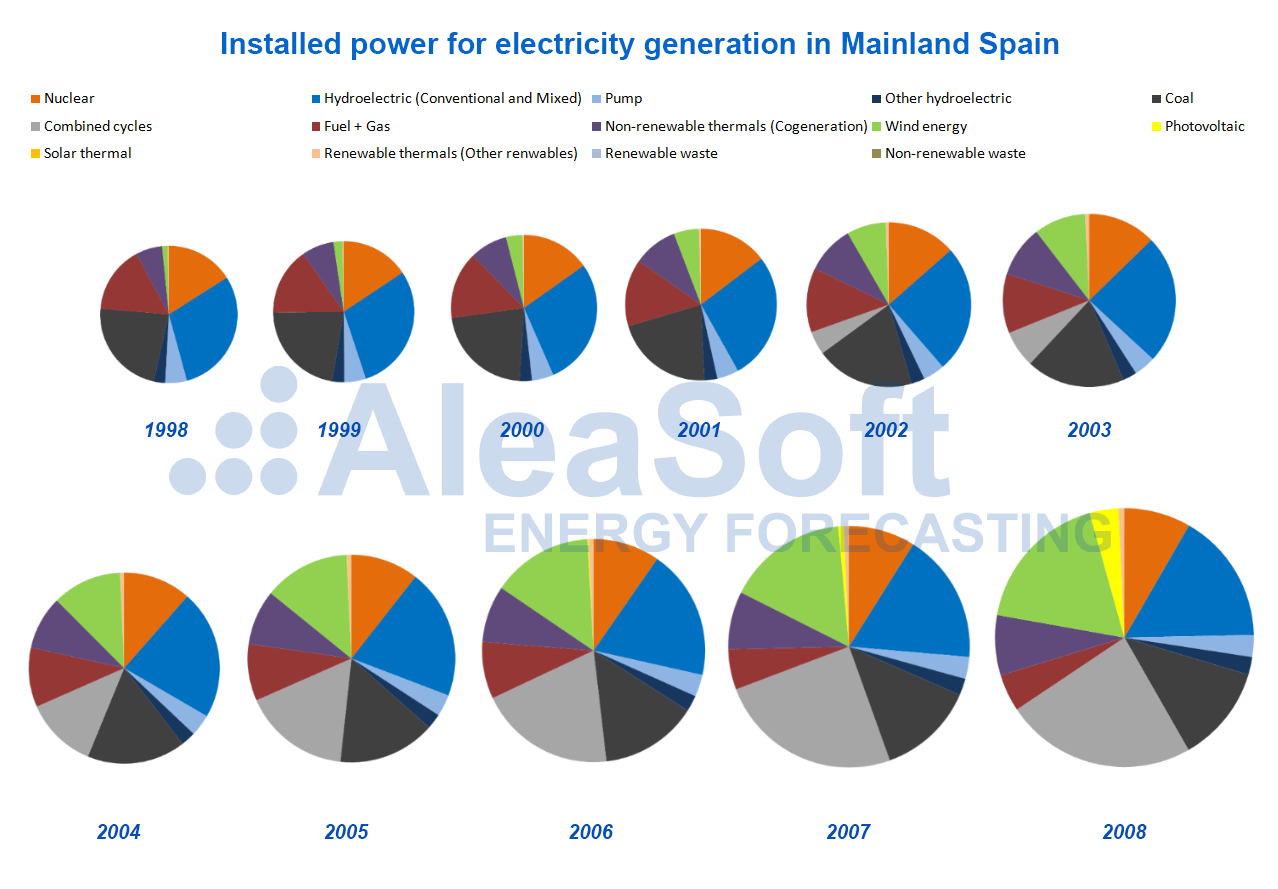 The installed capacity of solar energy was very discreet throughout the period. In 2008 the photovoltaic capacity was barely 4% of the total system and by that date the installed solar thermal power was negligible compared to other technologies.

The production with combined cycle gas turbines, being the technology with the highest power growth, at the end of the period analysed had already unquestionably displaced coal generation, and even the production with this last technology was reduced despite the fact that the installed capacity in the country remained constant. This phenomenon occurs mainly when being displaced in the market by other more profitable and less polluting technologies. 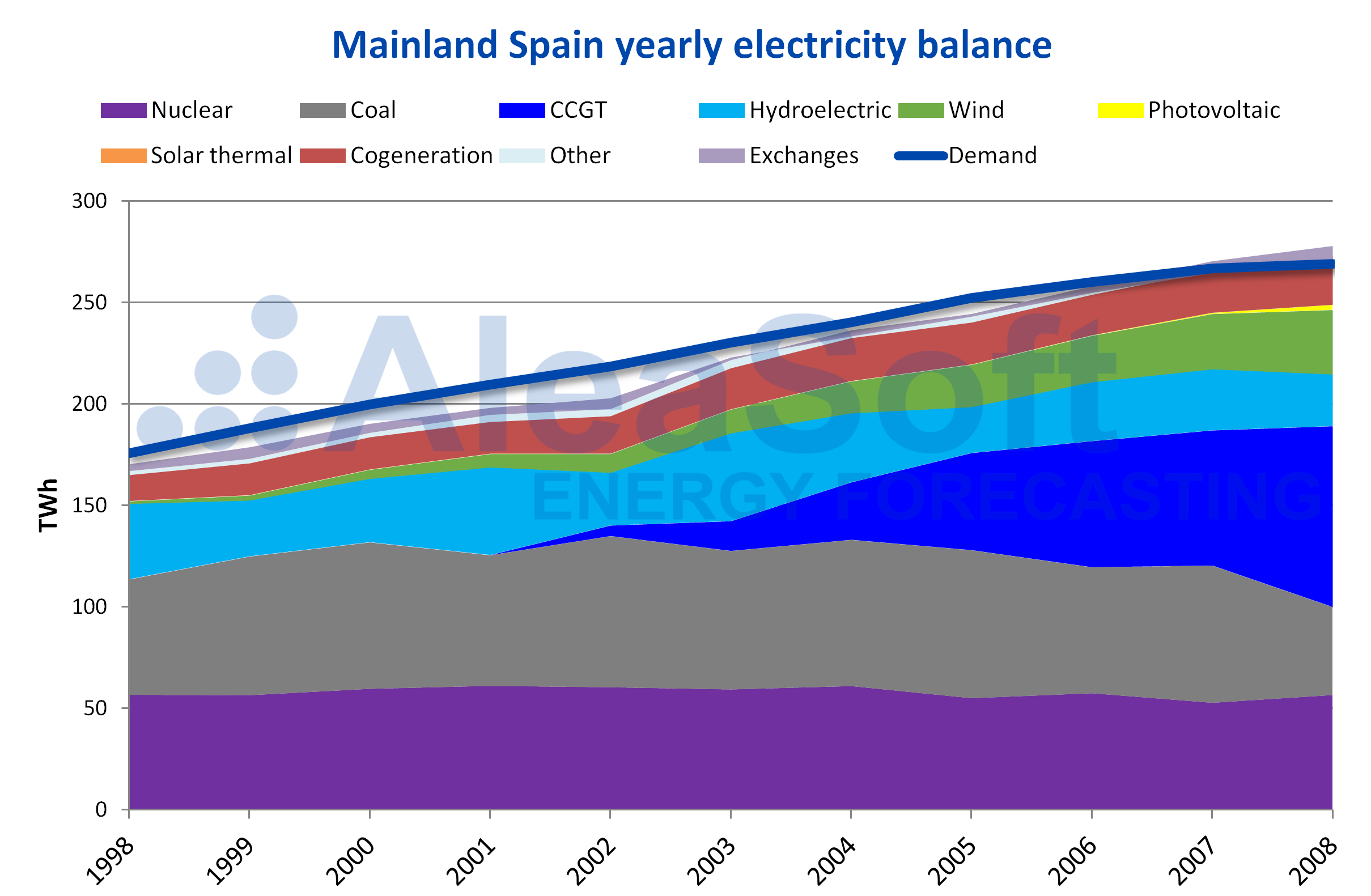 In the period from 1998 to 2008, the international energy exchanges of the electricity system of Mainland Spain were characterised by a continuous increase in exports. Towards the end of 2003, total exports exceeded total imports, with a change in the overall behaviour of the exchange flows, going from being importer to being clearly exporter from 2004. 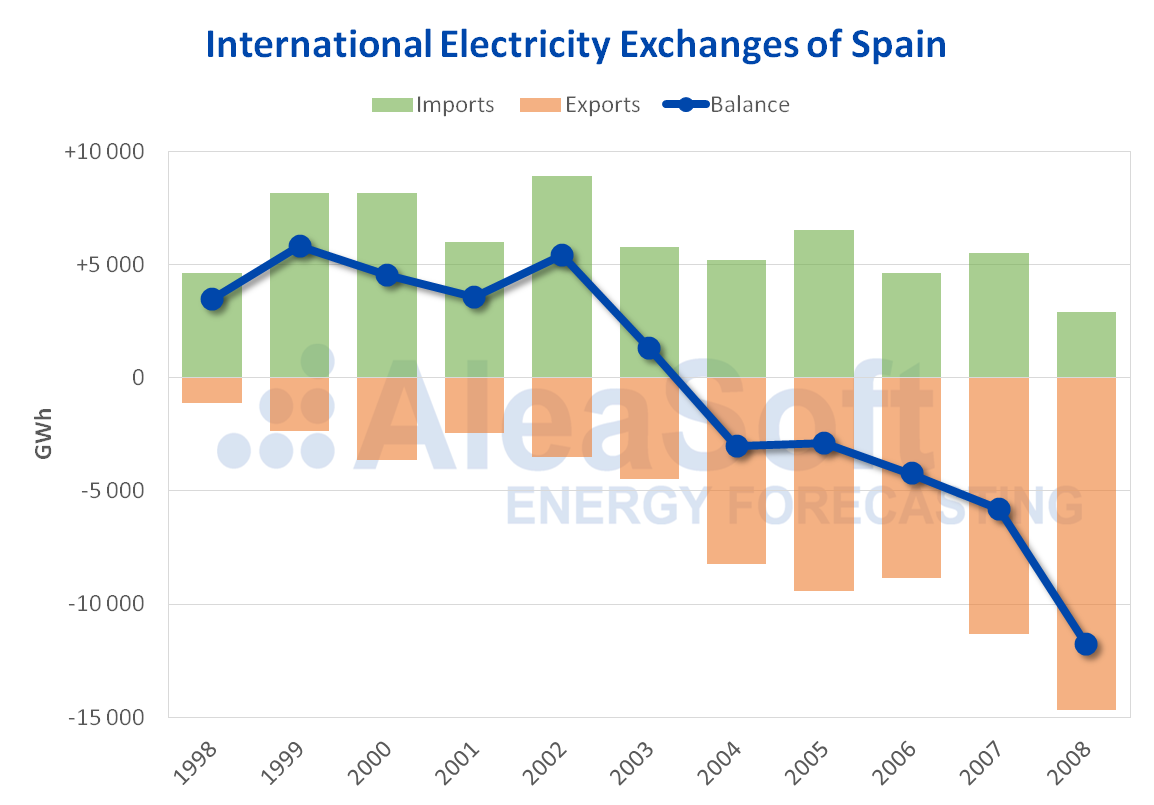 This effect is directly associated with increased trade flows to Portugal and to a lesser extent to Morocco, which were mainly exporters, while the importer flow from France remained stable. The annual total flows, both export and import, were gradually increasing, but in this period there was a significant increase in the exchanges between Spain and Portugal, becoming in 2008 the 58% of the total exchanges recorded that year. The entry into operation of the MIBEL market on July 1, 2007 was one of the reasons that favoured the increase in exports from Spain to Portugal. In the second half of 2007, the exports to Portugal grew by 60% compared to the first half of that year and 73% compared to the same half of the previous year. 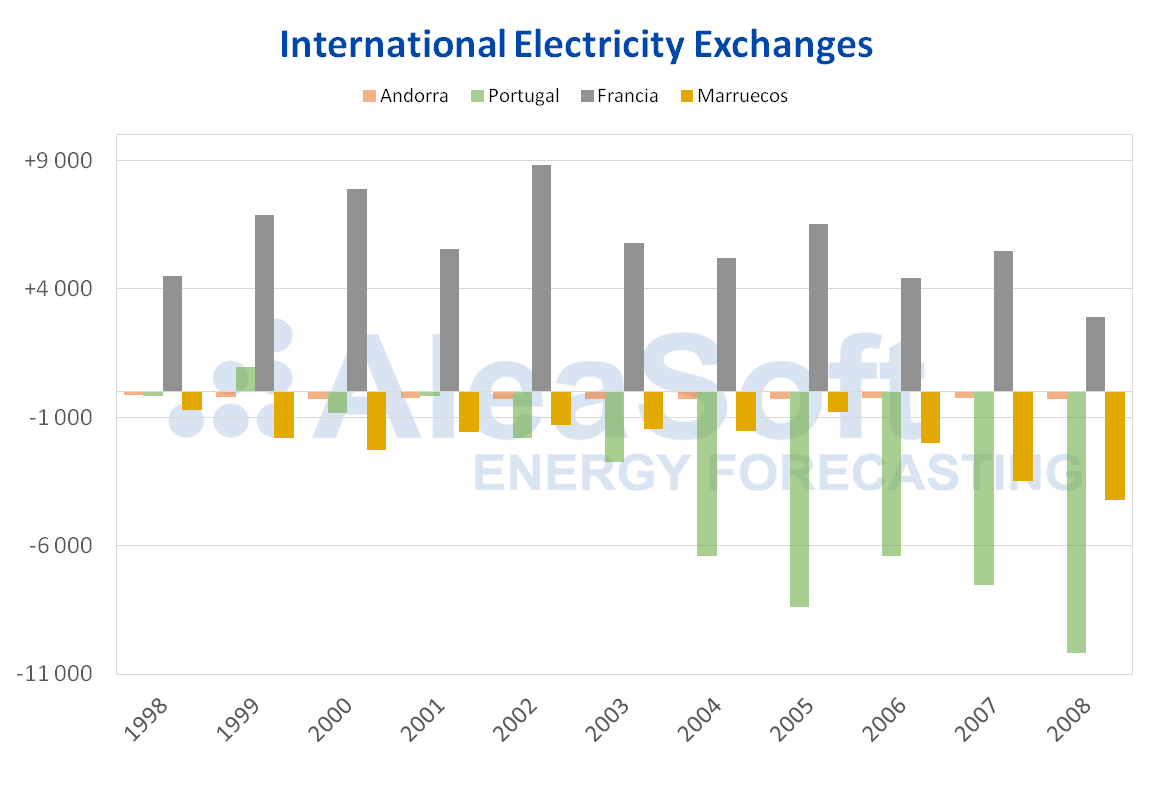 The CO2 emission rights (EUA) market began in 2005 to accomplish the obligations contracted in the Kyoto protocol. This year the average price reached for the CO2 emission rights was €18.08/t. Between 2005 and 2007, the first phase of the European Emissions Trading System (EU ETS) was developed, in which EUAs were over-allocated, causing an excess of supply that, together with the fact that the EUAs had an expiration date, led to the fall in prices from May 2006, until reaching values close to zero in 2007. In 2008, the second phase of the EU ETS began, in which the EUAs were adjusted and the prices rose again, reaching an annual average of €22.38/t that year. 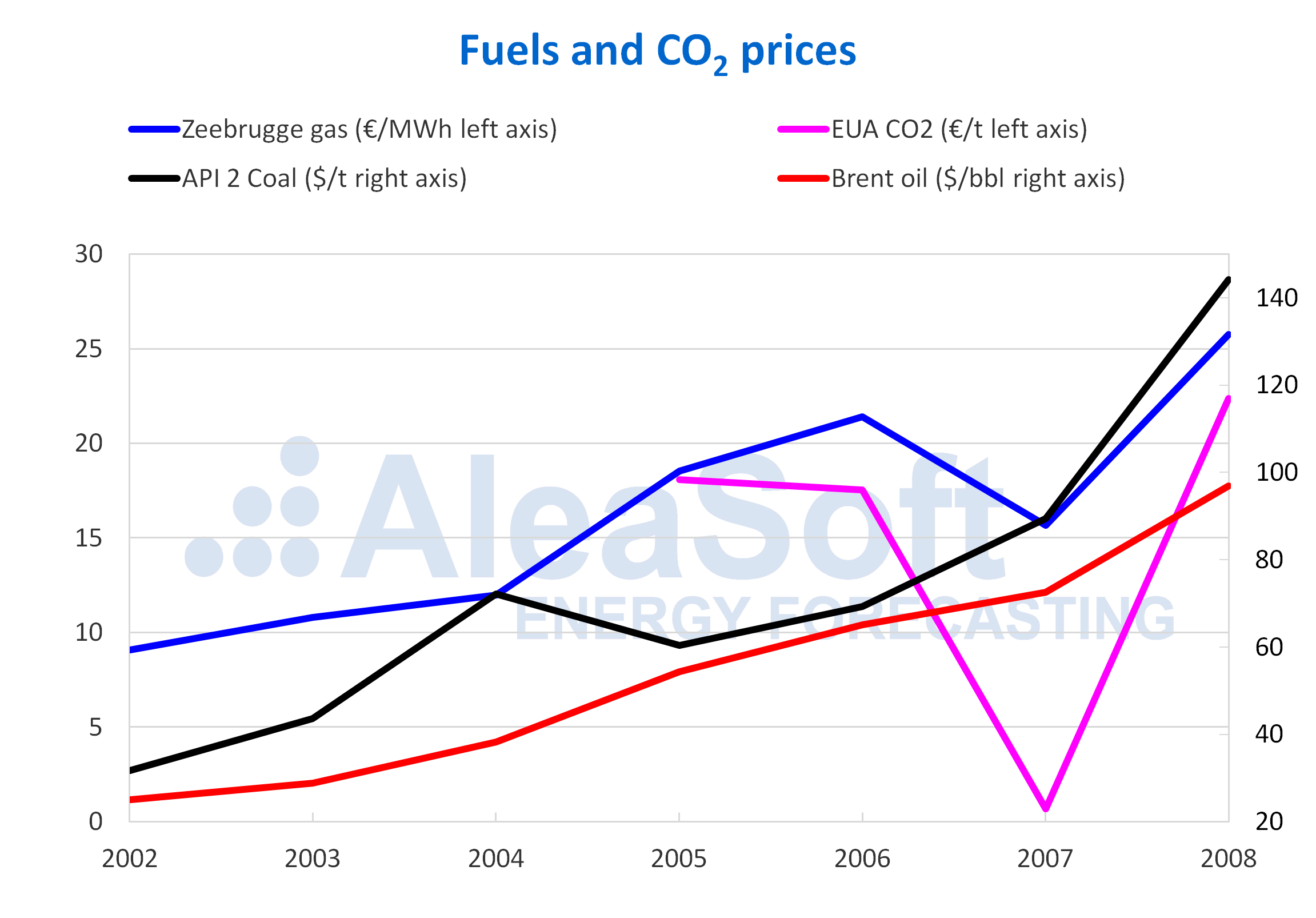 The first half of the Spanish electricity market

This first stage of the Spanish electricity market, which goes from its beginning until just before the explosion of the economic crisis, can be summarized as a period of rapid growth. The main factor was the significant growth in the electricity demand during this period of economic boom, which resulted in an increase in the electricity price. During these first ten years of the market, the generation park was modernized with the entry of the combined cycle gas turbine and the wind energy.

In the next part of this series of articles on the electricity market in Spain, we will analyse how the economic crisis completely halted the growth of the electricity demand, how the renewable technologies continued to make their way into the mix and how, little by little, the Iberian market is integrated with the rest of European electricity markets thanks to the increased capacity of the interconnections between countries.

PrevPreviousAleaSoft participates at the UNEF Solar Forum 2019: The PV as the main element of the energy model
NextThe prices of the European electricity markets rise due to the decline in the wind energy productionNext
Menu
Facebook-f Twitter Linkedin