AleaSoft, October 18, 2019. The European electricity markets prices rose this week due to the decline in wind energy production, after the falls of last week, according to AleaSoft. In the Iberian Peninsula the wind energy production increased, lowering the prices of the MIBEL market. The solar energy production rose in Germany, but fell in Spain and Italy. The gas and coal futures markets remained stable and the meetings around Brexit influenced the CO2 market and, to a lesser extent, that of Brent.

The Brent oil futures prices for the month of December in the ICE market began the week of October 14 with declines that remained until Tuesday. On Wednesday, October 16, this trend changed with an increase of 1.2% over the previous day, reaching a settling price of $59.42/bbl. Yesterday, Thursday, October 17, the prices rose again, closing at $59.91/bbl. This market was conditioned by the decline in the forecasts of global economic growth, which led to the decline in prices, although the expectations of an agreement on Brexit caused the price increase in the last two days. In AleaSoft it is estimated that global economy concerns will continue to have a great influence on that market, so the prices could continue with a downward trend in the coming days.

So far this week, the prices of TTF gas futures in the ICE market for the month of November showed great stability. On Monday, October 14, a price of €16.04/MWh was reached, €0.10/MWh lower than the settling price of the previous Friday, of €16.14/MWh. Subsequently, the prices remained virtually constant. The biggest variation was the one corresponding to yesterday, October 17, when there was a 0.3% decrease compared to Wednesday, reaching €16.03/MWh.

Earlier this week, the prices of the API 2 coal futures in the ICE market for the month of November experienced a downward trend similar to that observed until Thursday of last week. After Friday, October 11, there was a rise of 0.3% compared to Thursday and a settling price of $62.20/t was reached, this Monday, October 14, with a value of $62.05/t, the API 2 coal futures prices began to fall. The daily decreases are between 0.2% of Monday and 1.8% of Thursday, October 17, when the settling price was $60.95/t.

The CO2 emission rights futures in the EEX market for the reference contract of December 2019, started the week of October 14 with a price of €24.15/t, €0.30/t lower than the settling price of €24.45/t of Friday, October 11. Despite this, in the following days of this week the upward trend started last week was recovered, due to the expectations prior to the European summit on Brexit. The biggest rise this week, of 6.5% over the previous day, occurred on Tuesday, October 15, when the price reached €25.72/t. This Wednesday, October 16, the settling price was €26.31/t, the highest recorded so far this month. After the agreement reached for the departure of the United Kingdom from the European Union on October 31, yesterday, Thursday, October 17, the prices fell by 1.0% compared to Wednesday, closing at €26.06/t. 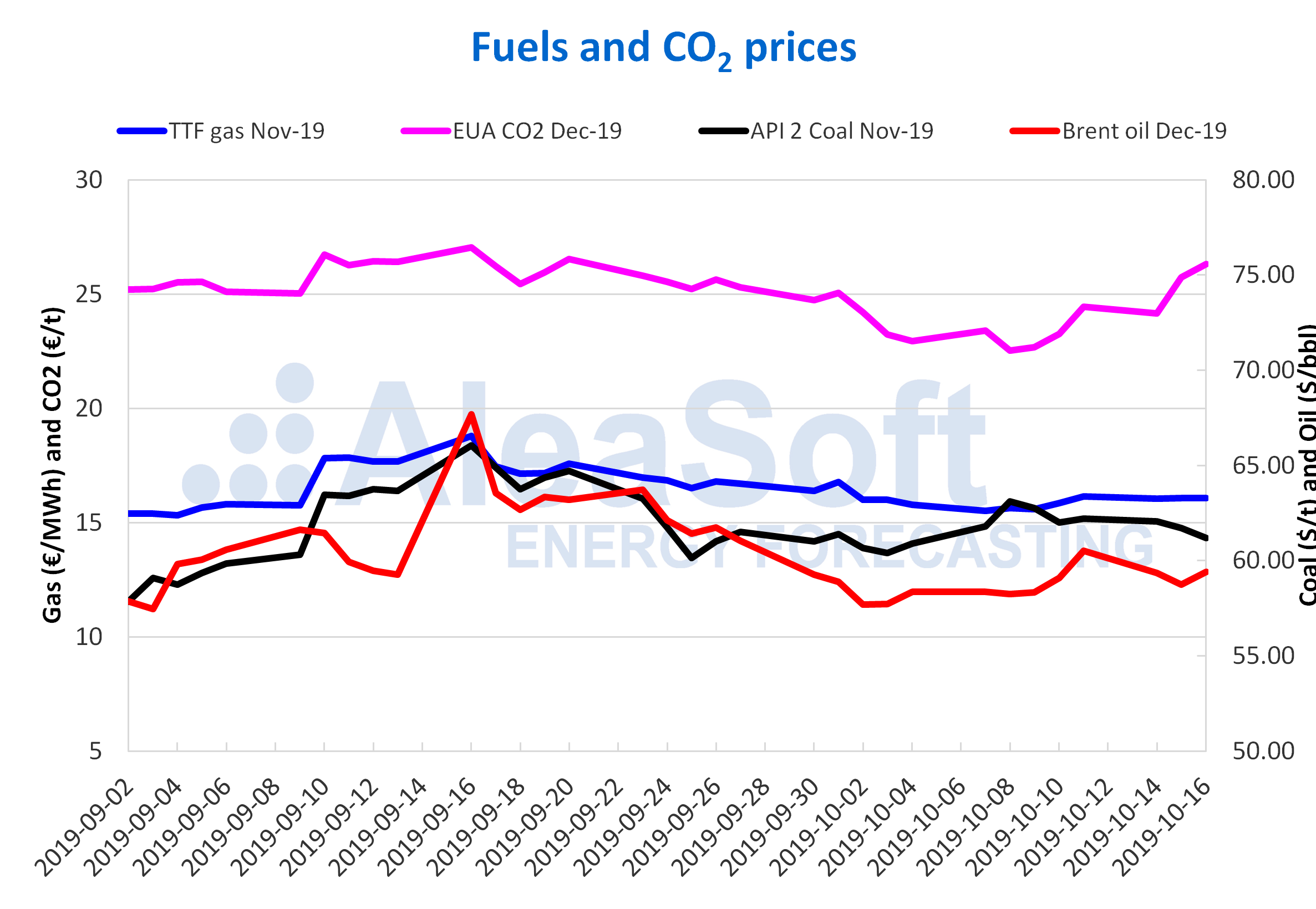 Between Monday and Thursday of this week the prices of most European electricity markets recovered after the declines recorded last week, caused by the high wind energy production. This week, the wind energy production dropped, leading to higher prices. The Nord Pool market of the Nordic countries regained its position as the market with the lowest prices. Specifically, this Thursday, October 17, with a daily average price of €37.51/MWh, it is almost €6/MWh below the second lowest priced market, which this time was the EPEX SPOT market in the Netherlands.

At the other extreme, Italy’s IPEX market continues to be the one with the highest price. By averaging on Thursday 17 a price of €60.77/MWh, the Italian market is €13.69/MWh above the MIBEL market, the second with the highest prices in the continent. The rest of the European markets closed with values from €43.43/MWh, corresponding to the EPEX SPOT market in the Netherlands, to €45.05/MWh with which the N2EX market of Great Britain closed. 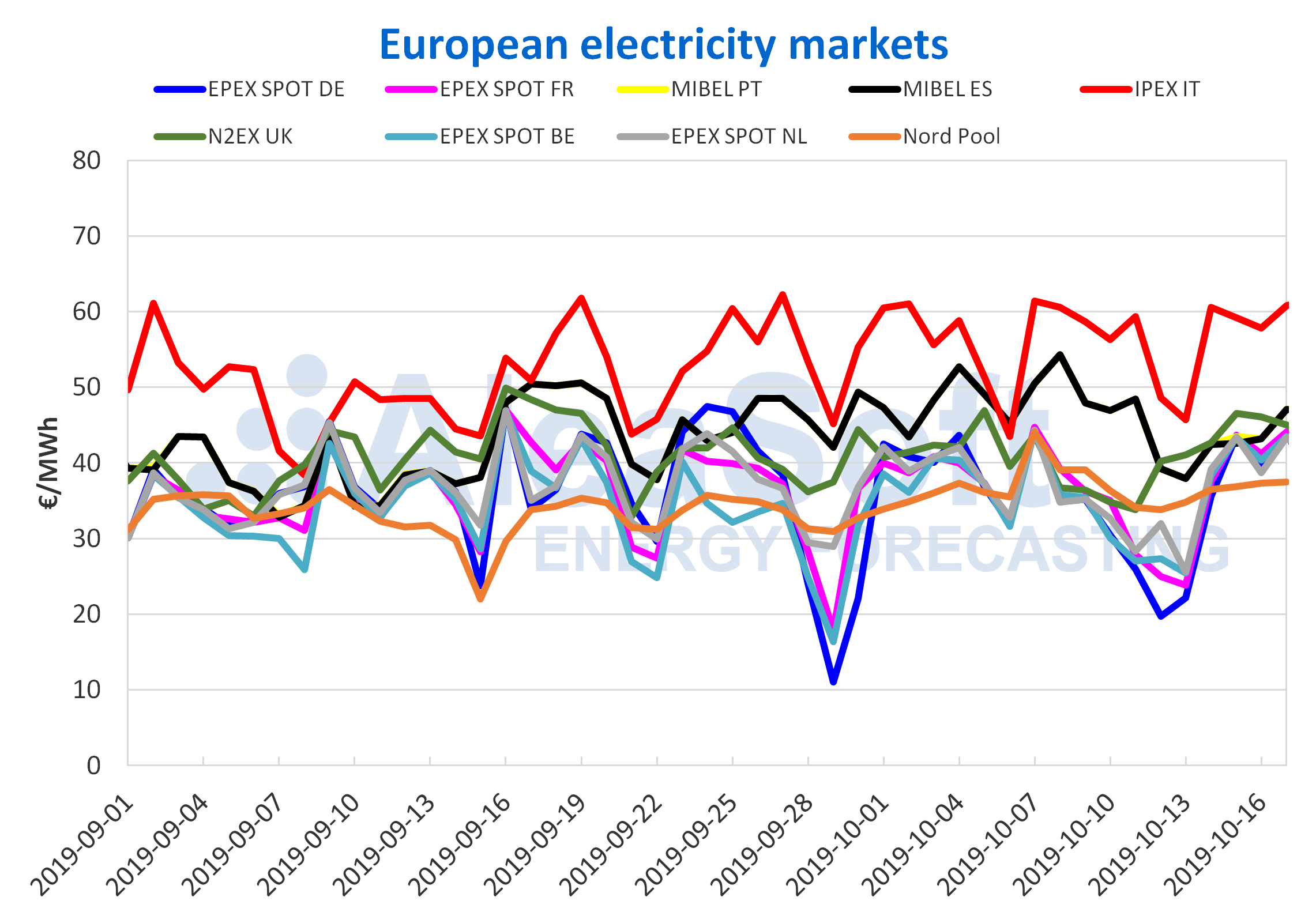 This difference between the price of Spain and Portugal was the largest since May 26 of this year, when a difference of €13.06/MWh was reached. This decoupling of markets occurs when the maximum capacity of the international interconnections is saturated.

The average price of Spain between Monday and Thursday of this week is more than €6/MWh lower than the average price of the same days of the previous week. Meanwhile, in Portugal the difference is €5.85/MWh. This represents a 12% decrease in both countries of the MIBEL market. Again, this price decline was caused by the increase in the wind energy production in the Iberian Peninsula, which in the first three days of the week was 62% compared to the last week’s average.

The day‑to‑day behaviour of the Iberian market was, both in the case of Spain and Portugal, of rising prices, closing the market every day with a price higher than the previous day. In AleaSoft, this trend is expected to stop in the following days and more noticeably when the weekend comes with the decline in the electricity demand.

Between Monday and Wednesday of this week the behaviour of the prices of the European electricity futures for the first quarter of 2020 was mainly upwards compared to those of Friday, October 11. Only the OMIP market, both in the futures of Spain and Portugal, and the EEX market in Great Britain, registered declines in this product, with decreases of 0.1% and 0.2%, respectively. The rest of the European electricity futures markets analysed recorded increases in the price of Q1 2020 of up to 1.7% of the Germany’s EEX market.

As for the prices of the electricity futures for the year 2020, only those of the United Kingdom declined until Wednesday of this week. The declines were 0.6% in the EEX market and 0.5% in the ICE market. The rest of the futures markets presented increases between the 0.1% of Spain and Portugal in the OMIP market and the 1.6% of Germany’s EEX market. In this way, Germany becomes the country where the futures prices raised the most for both the next quarter and the following year.

During the first three days of this week, the greatest variation in the electricity demand of the European countries analysed was registered in Great Britain with an increase of 8.4% over the same period last week. In the rest of the countries the variations were between ‑1.5% in France and 2.6% in the Netherlands. 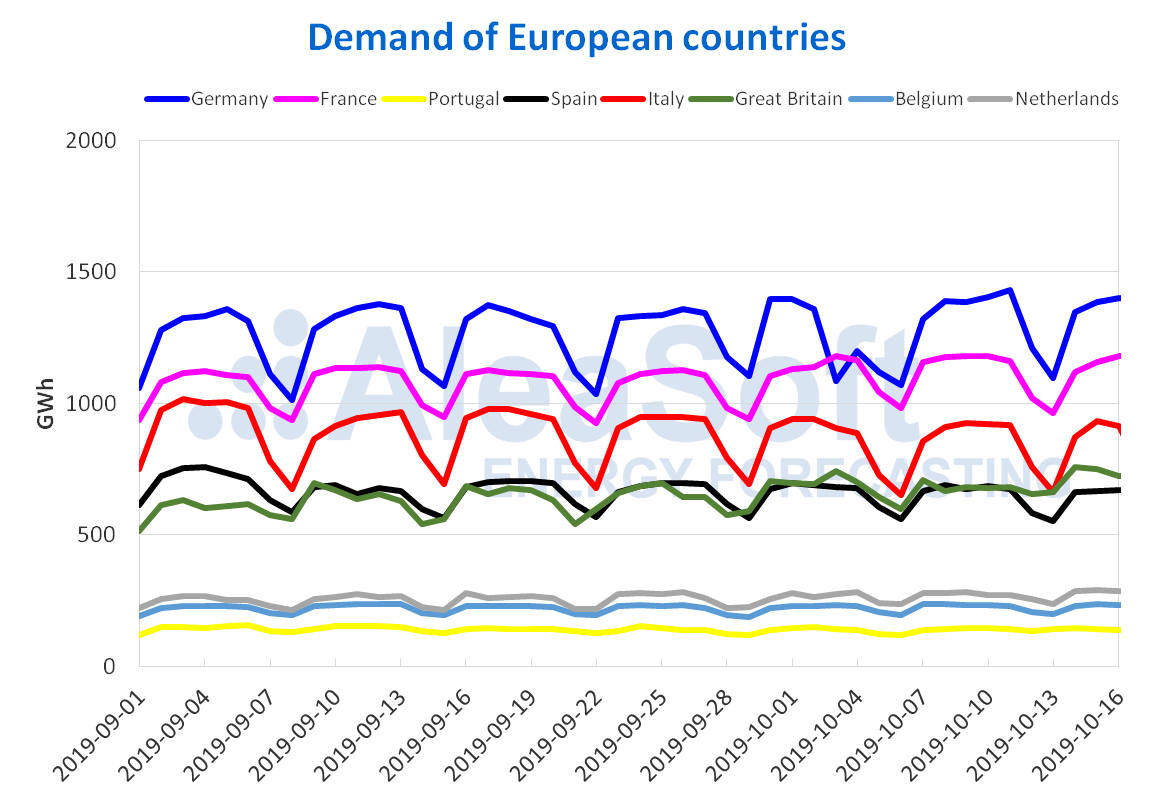 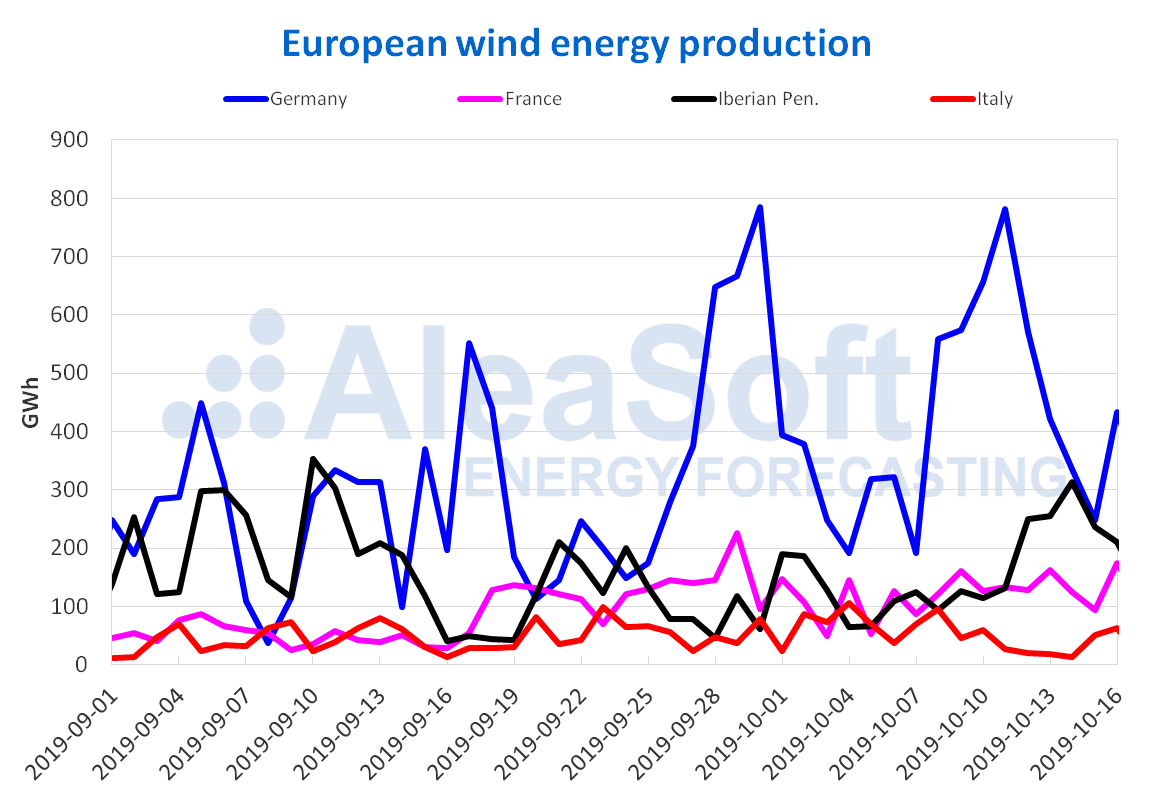 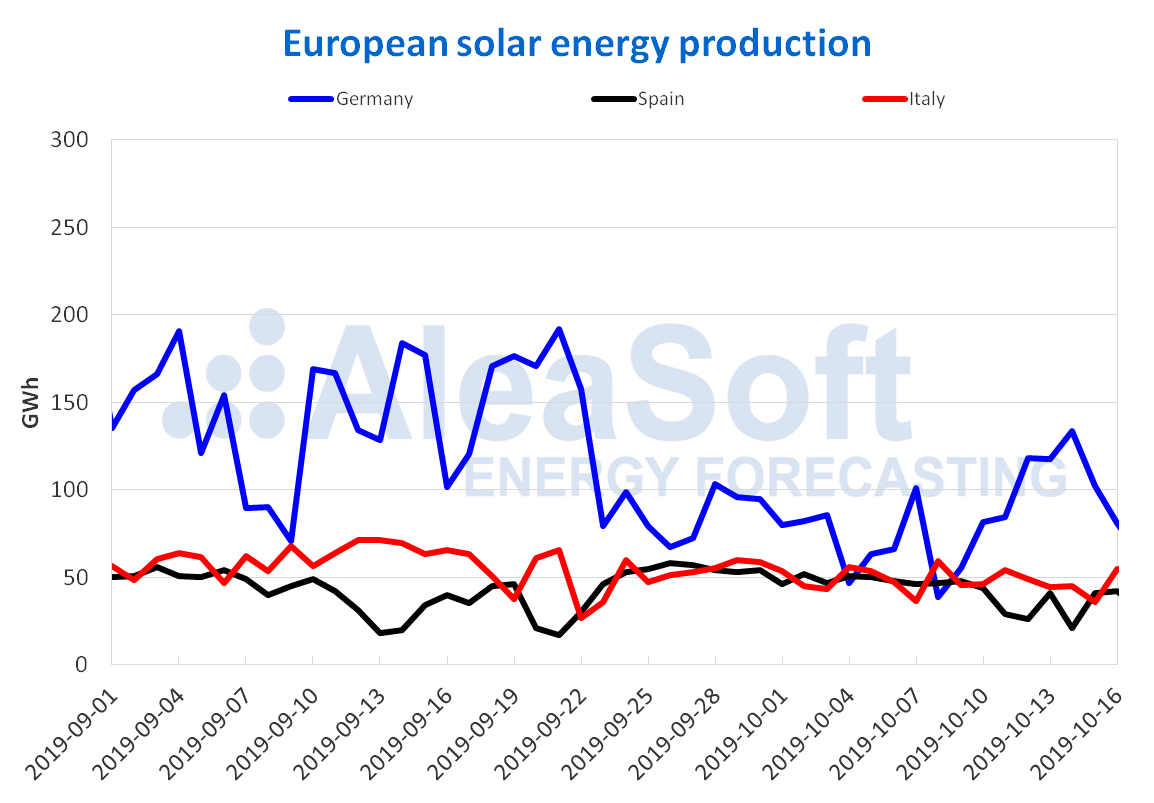 The solar energy production in Mainland Spain from last Monday to Wednesday decreased by 14% compared to last week’s average. A slight recovery is expected for next week.

The Unit 2 of the Almaraz nuclear power plant was disconnected from the electricity grid at 11:57 p.m. on Saturday, October 5, to begin work on refuelling number 25, and is still inactive. The recharge will last 34 days from the date of disconnection, until the beginning of November. This week the nuclear energy production remains similar to that of last week, at 143 GWh per day. 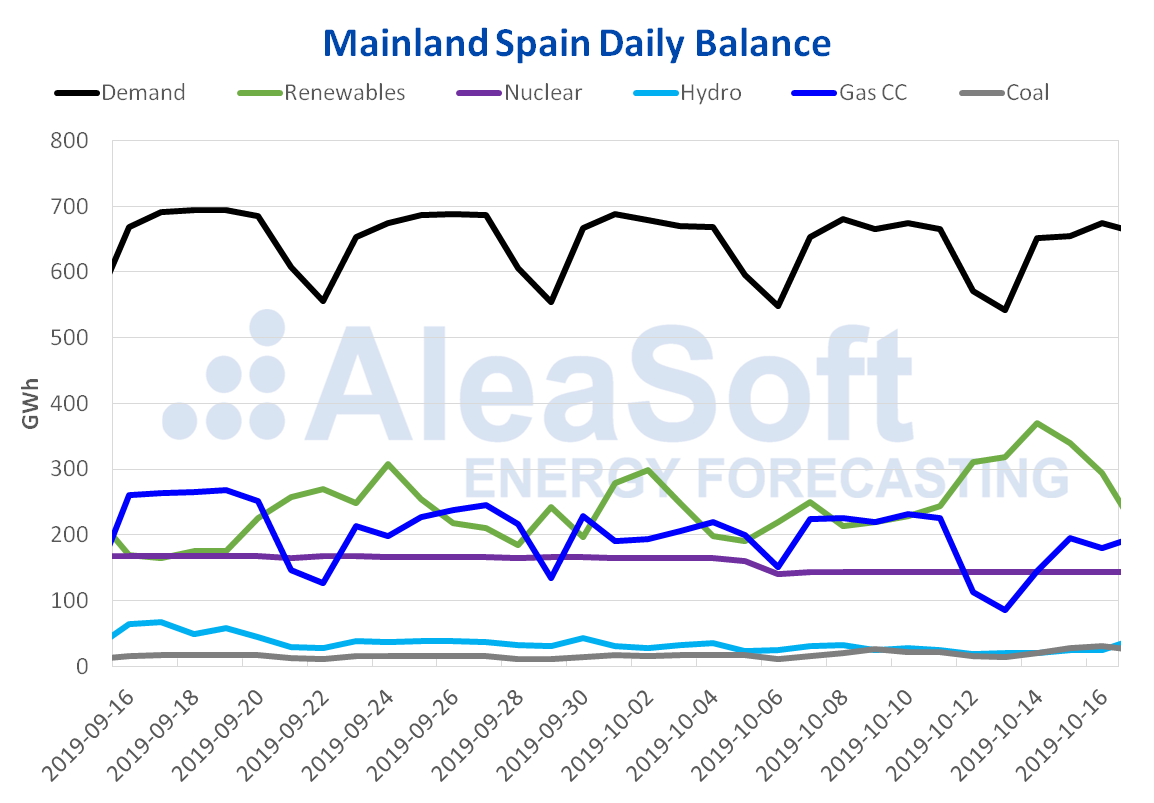 The level of the hydroelectric reserves is currently 7564 GWh, which represents 157 GWh less than the previous week. The current reserves constitute 33% of the total capacity of 23,281 GWh, according to data from the latest Hydrological Bulletin of the Ministry for the Ecological Transition.