AleaSoft Energy Forecasting, March 14, 2022. In the second week of March, several European electricity markets registered historical maximum prices dragged by record gas prices. However, towards the end of the week in some markets negative hourly values were registered thanks to the general increase in wind energy production. For the week as a whole, prices of most markets were higher than those of the previous week. Brent registered values that were not seen since 2008 and CO2 the minimum of the year.

The second week of March ended with an increase in solar energy production of 32% in the German market and 11% in the Italian market, compared to the production of the previous week. On the contrary, a reduction in production of between 6.5% and 20% was registered in the rest of the markets analysed at AleaSoft Energy Forecasting.

For the week that began on March 14, the AleaSoft Energy Forecasting’s forecasts point to a reduction in solar energy production in the markets of Germany, Italy and Spain. 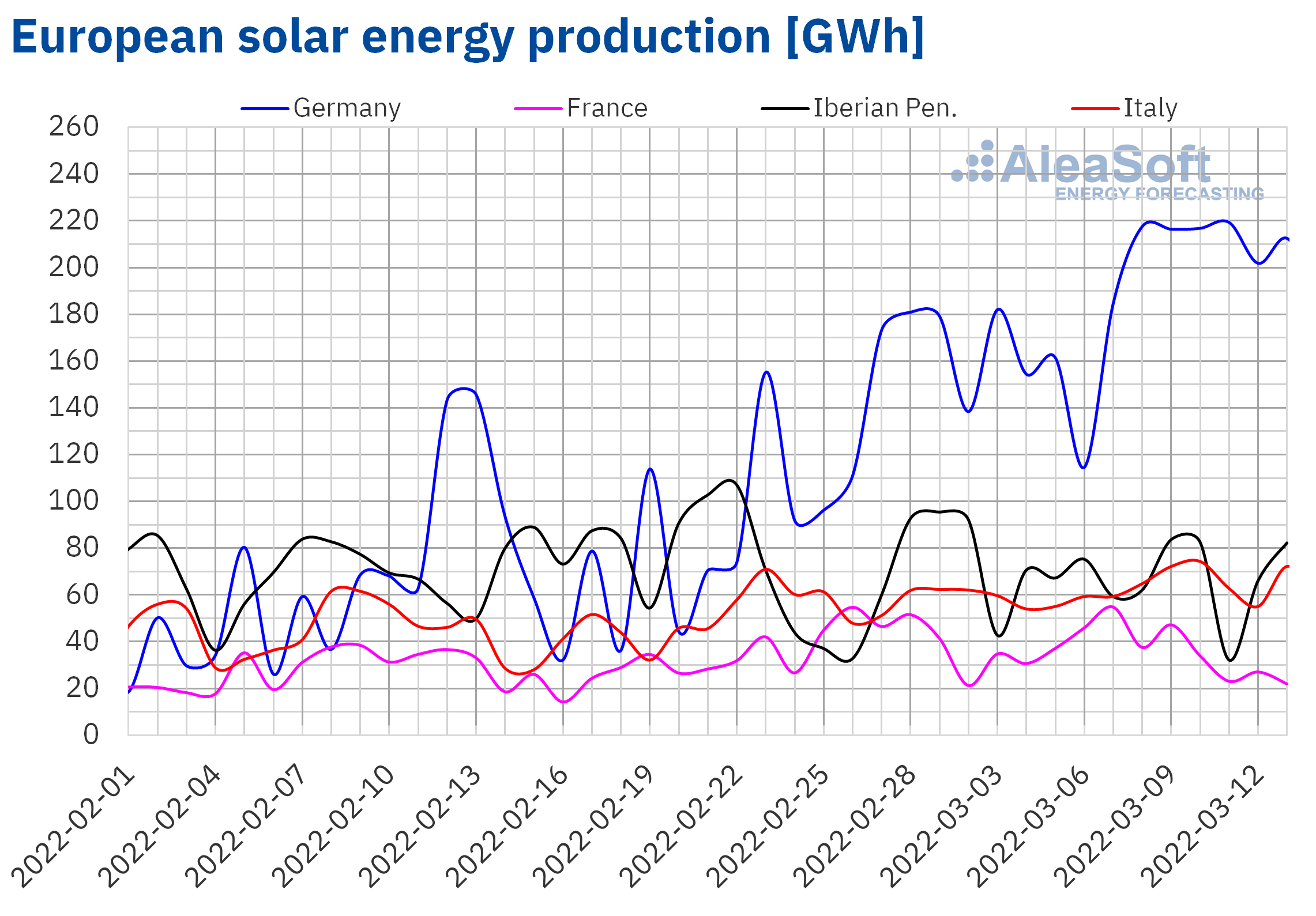 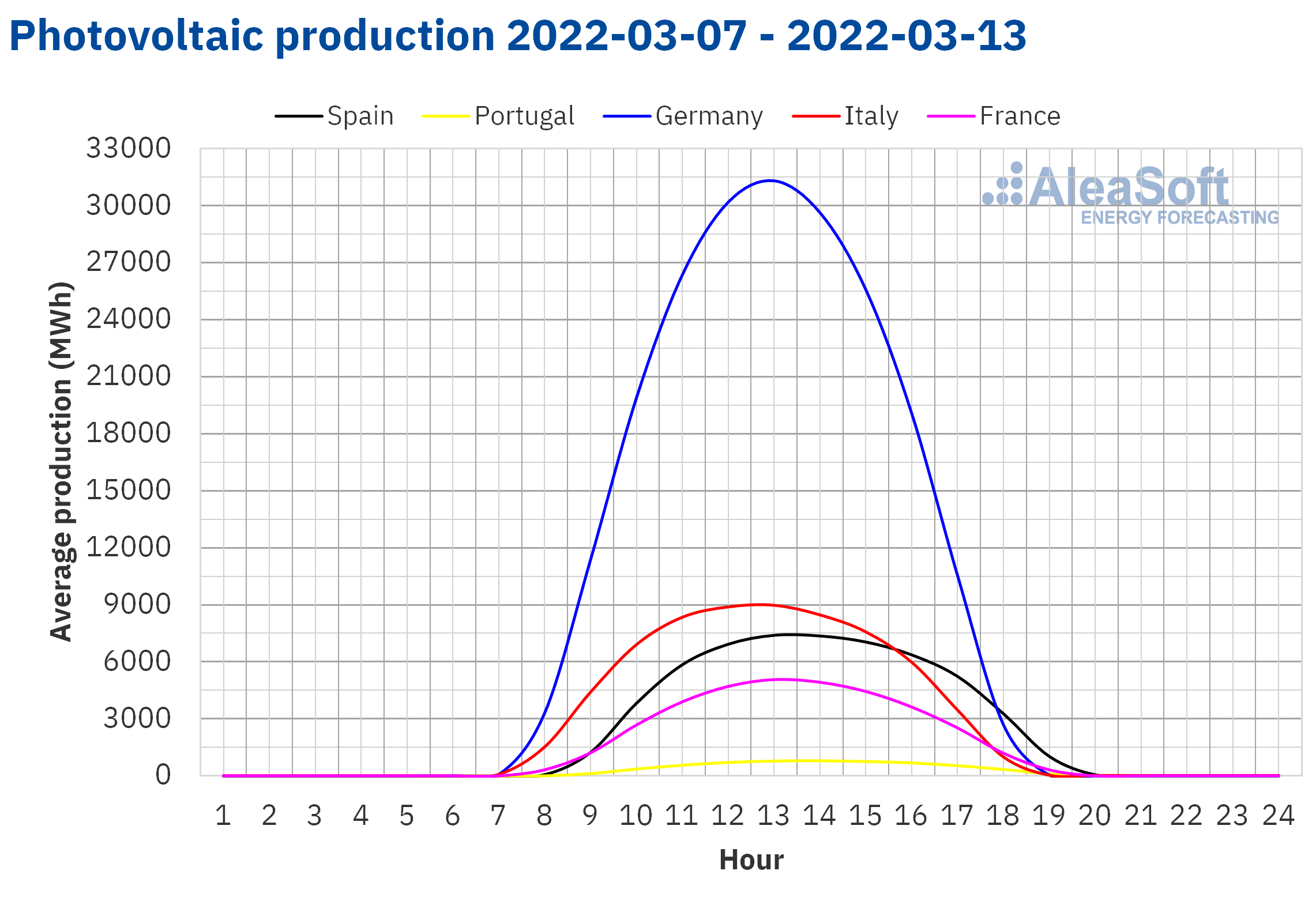 In the week of March 7, the wind energy production increased in all markets analysed at AleaSoft Energy Forecasting compared to the previous week. The largest increases were reached in the markets of Germany and France, where the production with this technology was more than double that registered during the week of February 28. In the rest of the markets the increase was between 6.6% and 30%. 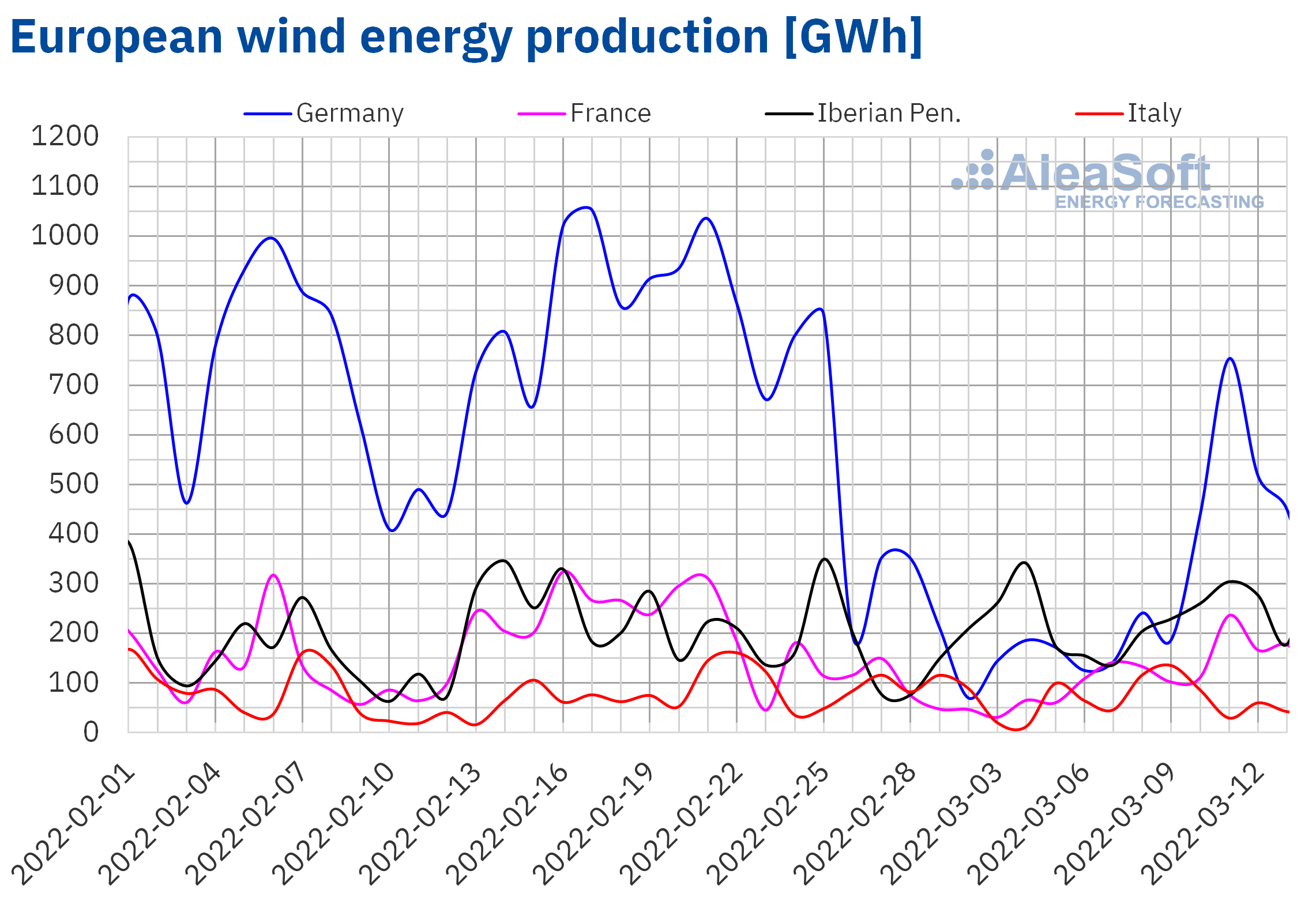 The electricity demand decreased in most European electricity markets analysed at AleaSoft Energy Forecasting during the second week of March compared to the previous week. The largest drop was registered in the market of Great Britain, which was 8.6%, followed by the 6.4% decrease of the Netherlands and the 5.7% decrease of the Belgian market. In the markets of France, Italy and Germany, the decreases were 1.2%, 1.1% and 1.0% respectively. The smallest variation in demand was registered in the Spanish market, with a drop of 0.8%. The decreases in demand in most markets were favoured by less cold temperatures. The only market in which the demand increased, by 4.7%, was in the Portuguese market, where the Carnival Tuesday was celebrated during the previous week.

For the week of March 14, the AleaSoft Energy Forecasting’s demand forecasting indicates an increase in the markets of the Netherlands, Belgium, Portugal and Great Britain. On the other hand, in the rest of the analysed markets, the demand is expected to fall. 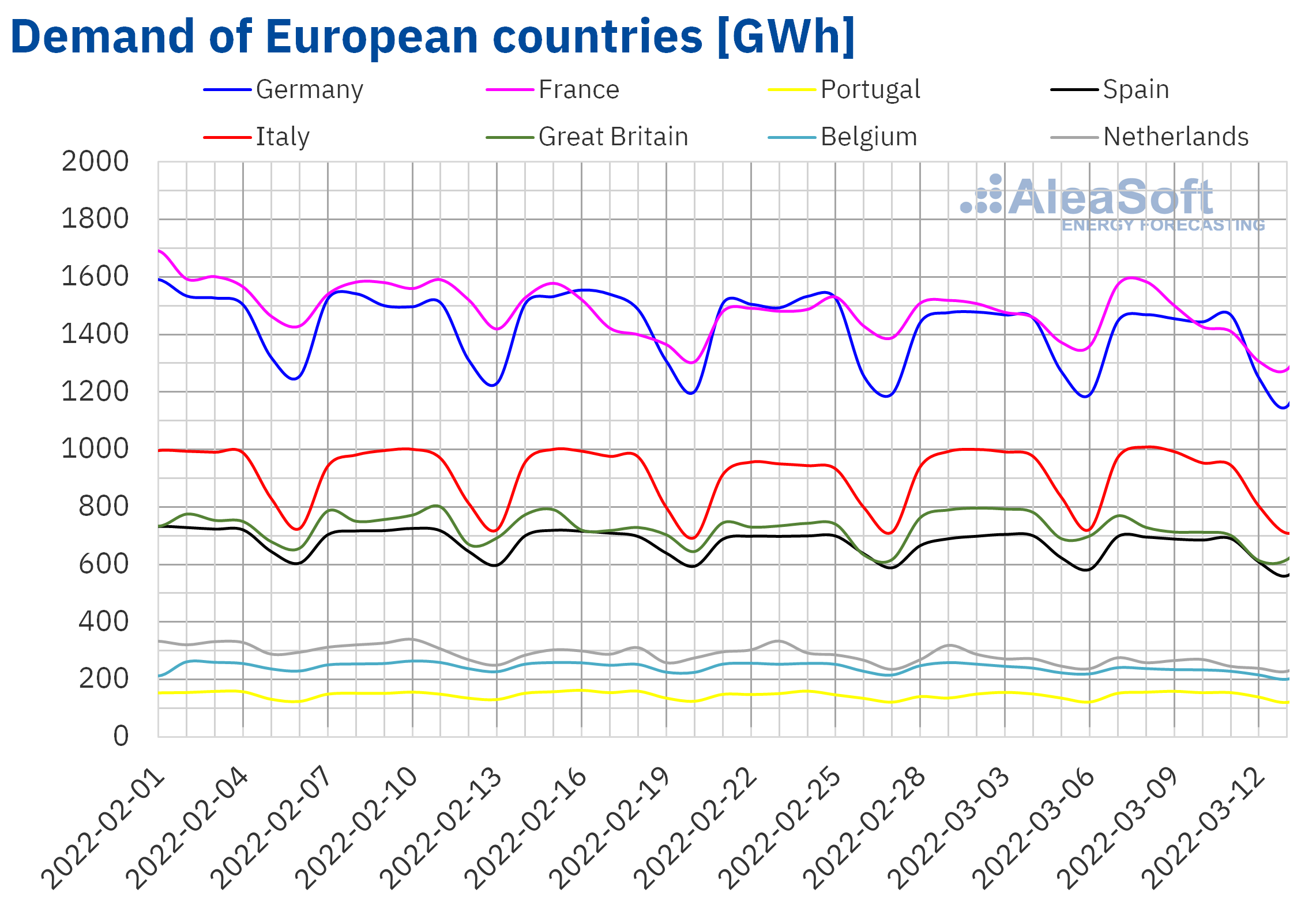 In the week of March 7, prices of almost all European electricity markets analysed at AleaSoft Energy Forecasting increased compared to the previous week. The exceptions were the Nord Pool market of the Nordic countries and the EPEX SPOT market of Germany, with decreases of 1.8% and 7.9% respectively. On the other hand, the highest price rise was that of the IPEX market of Italy, of 25%, while the smallest increase was that of the EPEX SPOT market of Belgium, of 1.9%. In the rest of the markets, the price increases were between 4.2% of the N2EX market of the United Kingdom and 18% of the MIBEL market of Spain and Portugal.

In the second week of March, the average prices exceeded €275/MWh in almost all analysed electricity markets. The exception was the Nord Pool market, which registered a weekly average of €148.25/MWh. On the other hand, the highest average was that of the Italian market, which reached a value of €407.44/MWh. In the rest of the markets, the prices were between €277.55/MWh of the German market and €372.68/MWh of the Spanish market.

During the week of March 7, the evolution of electricity market prices was highly influenced by the behaviour of gas prices, which reached a maximum on Tuesday, March 8, and then began to decline. Similarly, the highest daily prices in the European electricity markets were reached that day. In most markets, the prices of March 8 were the highest in at least the last ten years, except in the British and Nordic markets, where higher prices were registered in December 2021. In the case of France, Spain, Portugal and Italy, the prices exceeded €540/MWh. In this last market, the maximum daily price, of €587.67/MWh, was reached.

On the other hand, the decreases in gas prices together with a high wind energy production in most markets favoured the price decreases in the last days of the week. The lowest daily price of the week, of €80.44/MWh, was registered on Friday, March 11, in Germany.

Regarding the hourly prices, on Tuesday, March 8, from 7:00 p.m. to 8:00 p.m., an hourly price of €700.00/MWh was reached in the markets of Germany, Belgium, Spain, France and the Netherlands. This price was the highest in history in the Spanish market and at least since April 2011 in the Netherlands. In the German, Belgian and French markets it was the highest price since March 2008, March 2011 and November 2016, respectively. 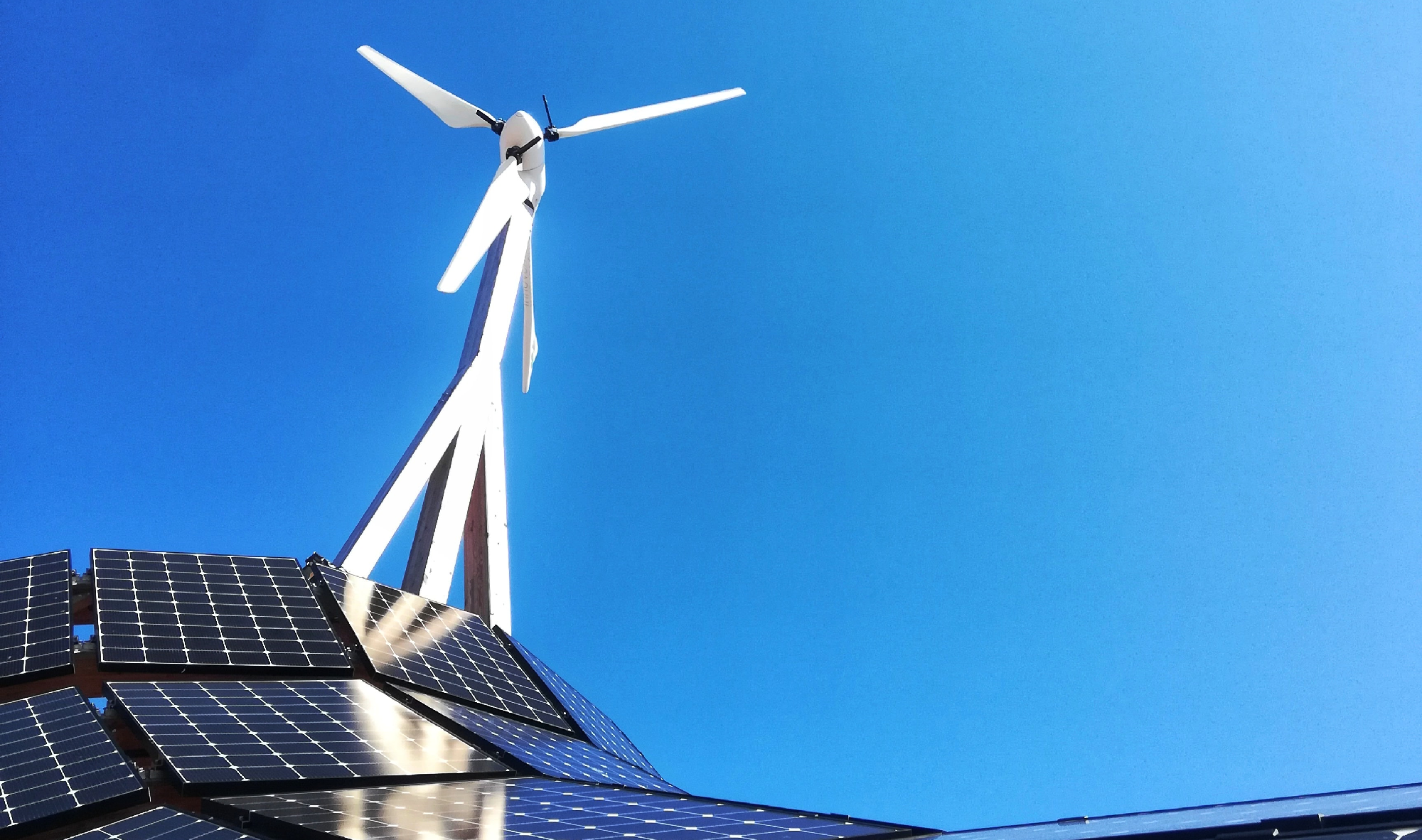 The AleaSoft Energy Forecasting’s price forecasting indicates that, in the week of March 14, European electricity markets prices might fall, favoured by the decrease in demand in some markets and by the increase in wind energy production in the case of the Iberian market, although it will depend on how gas prices evolve. 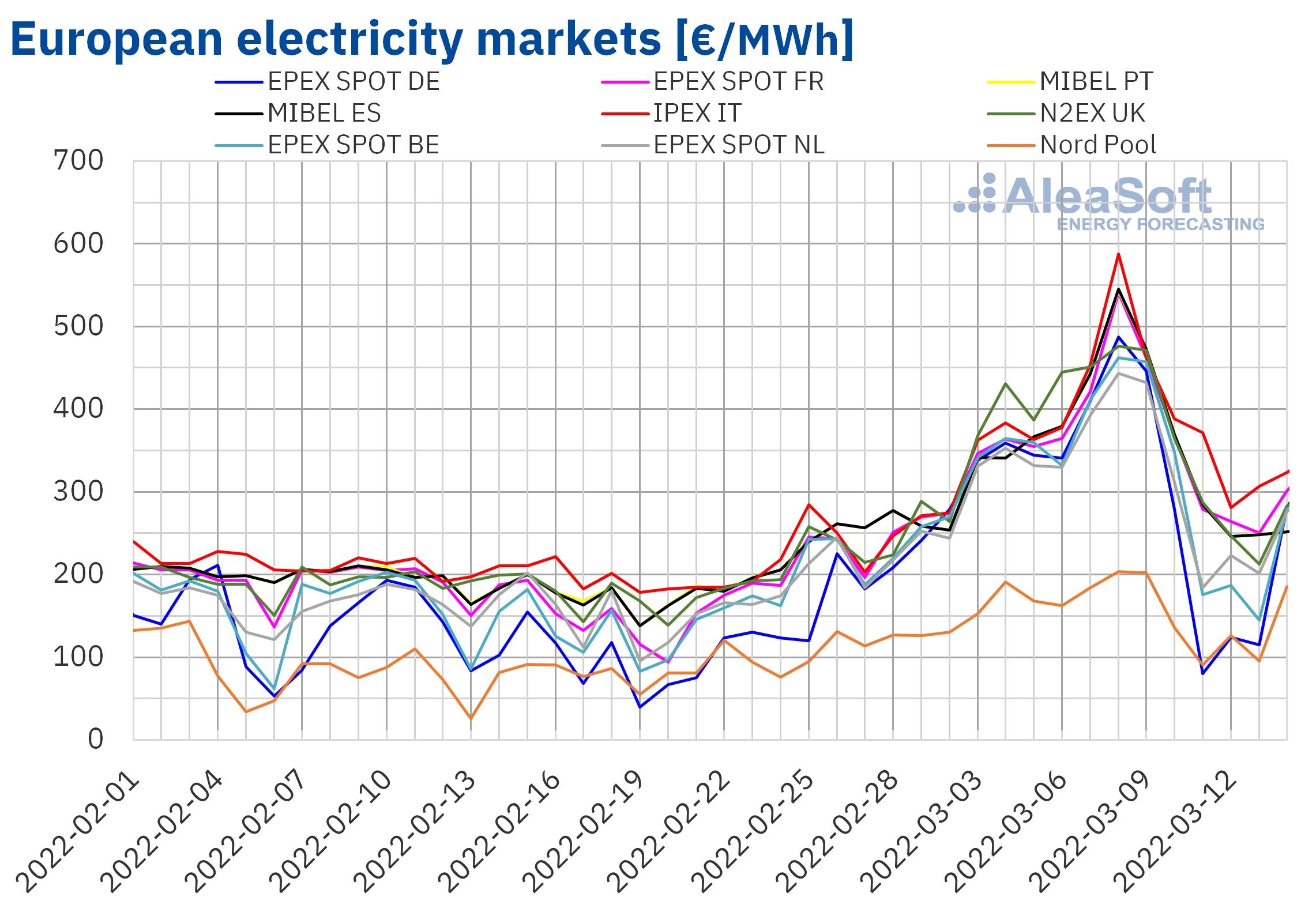 In the second week of March, at the settlement of the session of the 11th, the electricity futures prices for the next quarter registered decreases in all European markets analysed at AleaSoft Energy Forecasting, when compared to the settlement prices of the previous Friday, March 4. Decreases were observed from 15% of the NASDAQ market of the Nordic countries to 34% reached in the EEX market of Spain.

In the case of the product of the year 2023, the behaviour was more heterogeneous. In the EEX market of Germany and the United Kingdom, as well as in the ICE market of Belgium and the Netherlands, prices rose. Meanwhile, in the rest of the markets there were decreases. The EEX market of Spain, as well as the OMIP market of Spain and Portugal, registered the largest decrease, which was 11%.

The fear of supply cuts from Russia in retaliation for the sanctions imposed on this country, as well as the ban on the import of oil from Russia in some countries, favoured the increase in Brent oil futures prices. On the other hand, the favourable evolution of the talks on the Iran nuclear pact, which would allow sanctions on crude oil exports from this country to be lifted, also exerted its influence on prices. But these talks became stalled at the end of the week.

As for the TTF gas futures prices in the ICE market for the Front‑Month, they began the second week of March with increases compared to the previous session. On Monday, March 7, the settlement price reached a historical maximum of €227.20/MWh and was 130% higher than the price of the same day of the previous week. Subsequently, the prices fell until reaching the weekly minimum settlement price, of €126.40/MWh, on Thursday, March 10. On Friday, the prices recovered to €131.23/MWh. But this price was 32% lower than that of the previous Friday.

The evolution of the conflict between Russia and Ukraine continued to influence the TTF gas futures prices. The high gas prices are forcing some companies to consider production interruptions and even think about selling their gas hedges.

Regarding the CO2 emission rights futures in the EEX market for the reference contract of December 2022, on Monday, March 7, they registered the lowest settlement price so far this year, of €58.30/t. This price was 29% lower than that of the previous Monday. However, the rest of the second week of March the prices increased. As a result, the settlement price of Friday, March 11, was €76.76/t, 18% higher than that of the previous Friday. 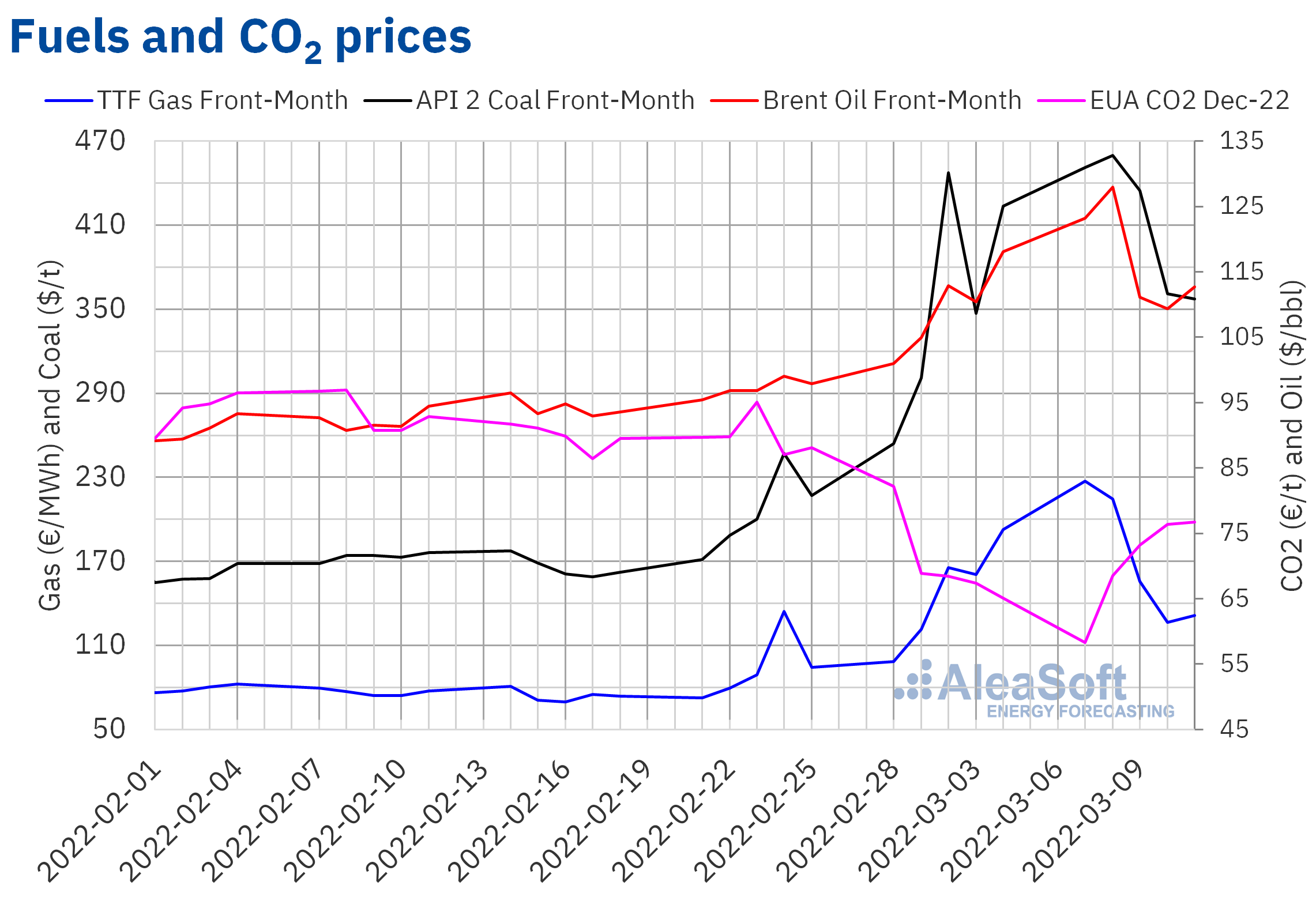 In the next AleaSoft Energy Forecasting’s webinar, the effects that the Russian invasion of Ukraine has had on the European energy markets will be analysed. This webinar will take place on Thursday, March 17, and will also include speakers from EY, who will analyse the main novelties in the regulation of the Spanish energy sector, the renewable energy projects financing, the importance of PPA and self‑consumption and the main considerations to take into account in the portfolio valuation.

Large and electro‑intensive consumers are being severely affected by the high energy prices. In these times of uncertainty, the need to have a long‑term vision when signing a PPA as part of an energy purchase strategy that helps minimise the market prices risk becomes more important.