August 7th, 2015– This summer, high temperatures have led to a significant increase in electricity demand in Spain. Electricity consumption of air conditioning has had several peaks due to following heat waves that have especially affected southern and central Spain. 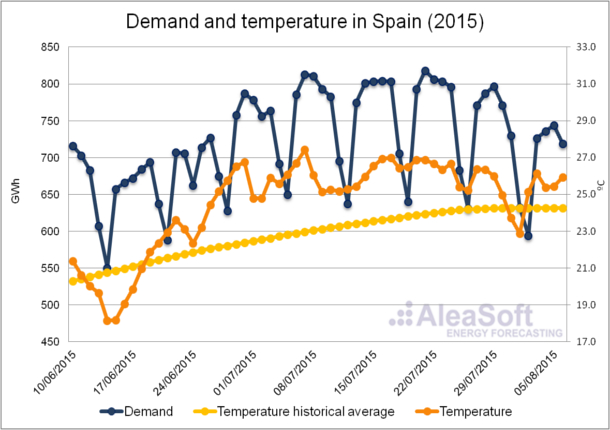 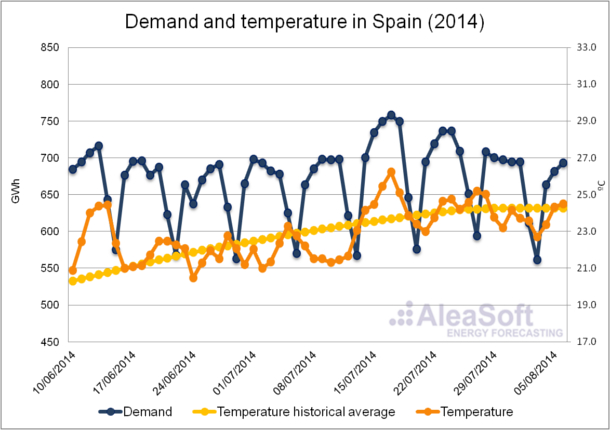 In the last 34 days, electricity demand has been 11% higher than it was during the same period of the previous year. On July 7th in coincidence with temperature peak, there was an 813 GWh peak in electricity demand, only surpassed by the 818 GWh demand on July 21th. There were other minor peaks, which coincided with average daily temperature peaks: one with 787 GWh on June 30th, another with 804 GWh on July 16th.

After analyzing the effects of heat on the energy sector, the following question naturally arises: what are the measures each company should adopt in order to optimize energy costs and energy management? Obviously, the heat wave has a decisive impact on consumption and energy demand, that is why AleaSoft’s energy forecasts enable our clients to make decisions in a very efficient manner.

Thanks to the accuracy of AleaSoft’s energy forecasts, they are able to make significant savings at a short, mid and long term. Furthermore, we help them improve the efficiency of risk management, guaranteeing a high level of quality, competence and commitment. In other words, our main goal is to boost the profitability of each of our clients by providing them with reliable forecasts that enable them to make decisions responsibly.

Summer is not over yet and other heat waves may be registered. If you think we can help you reduce the power consumption of your company with our forecasts, AleaSoft is your solution.