AleaSoft Energy Forecasting, August 2, 2022. The interruptions and fears about the gas flow to Europe during the month of July shot up gas prices by 59% and dragged electricity markets prices to historical highs. The Iberian market is the only one that registered a drop thanks to the application of the cap on the gas price. Meanwhile, the solar photovoltaic energy production continues to increase year after year due to the increase of installed capacity.

The solar energy production during the month of July increased in most of the markets analysed at AleaSoft Energy Forecasting compared to the previous month and once the calendar effect was corrected. The largest increase was registered in the French market, of 16%. In the Portuguese market, the increase between these periods was 10%. Except in the German market, in which solar energy production fell by 1.1%, in the rest of the analysed markets the increase compared to June was between 3.7% and 4.7%.

In the comparison with the month of July 2021, the solar energy production grew by 56% in the French market. In the Portuguese market, the growth was 46% while in the rest of the markets it increased between 26% and 17%. 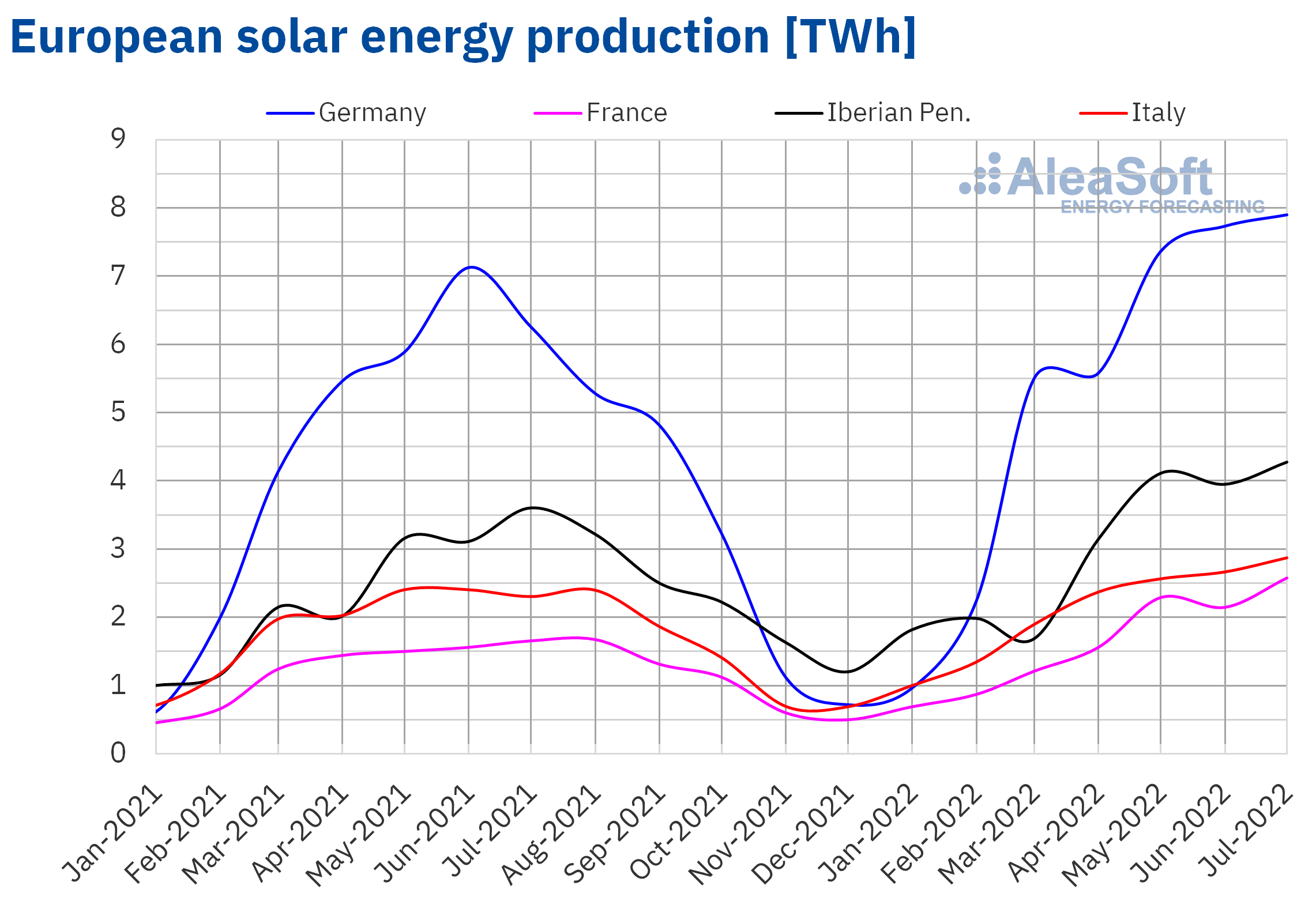 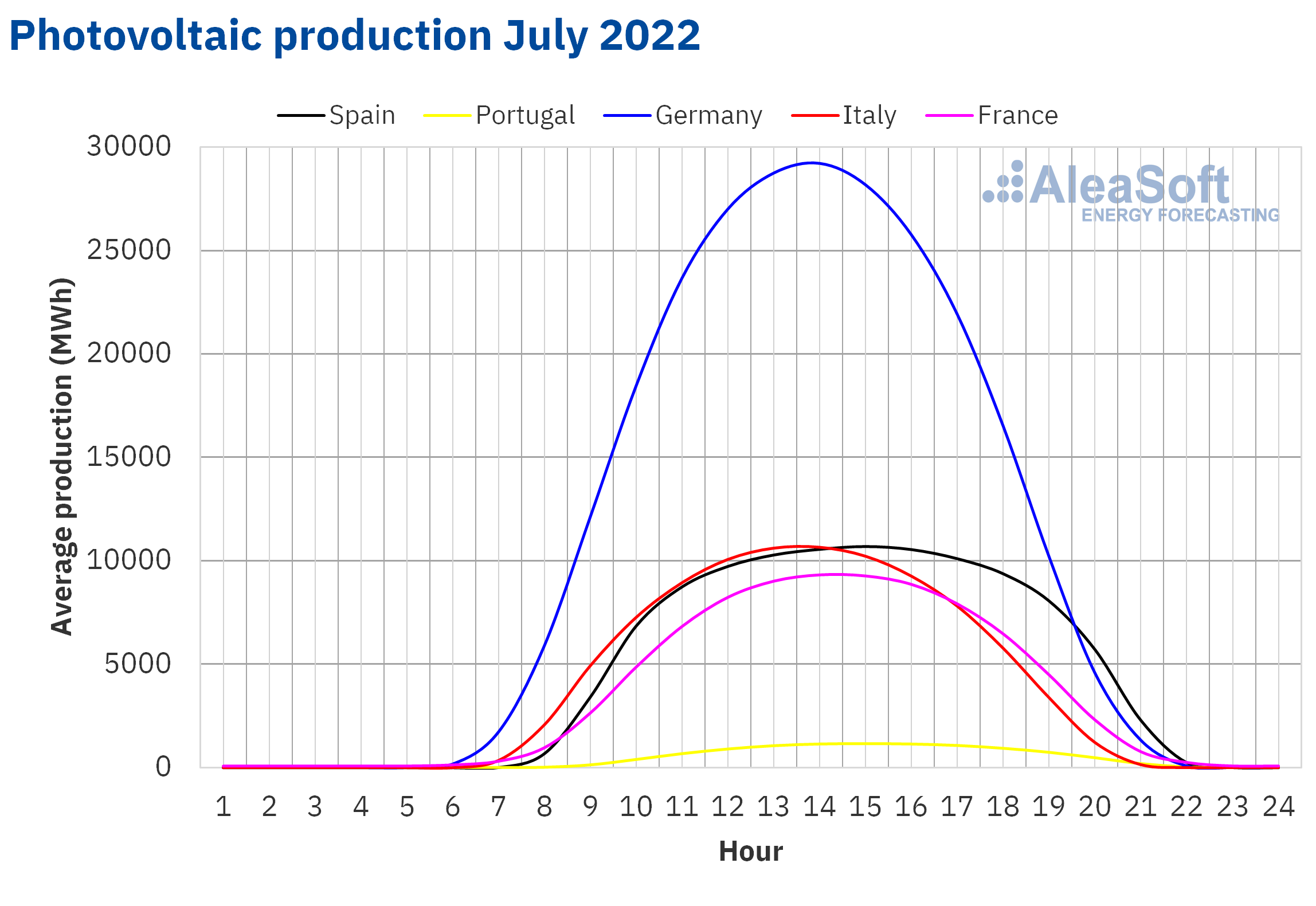 The wind energy production increased by 23% in the German market and a timid 0.5% in the Spanish market compared to July 2021. In the rest of the analysed markets, the production with this technology reduced between 15% and 28%.

In the comparison with the previous month, the largest increase was also registered in the German market, of 27%, while in the Spanish market the increase was 10%. In the rest of the markets, the production fell between 1.4% and 22%. 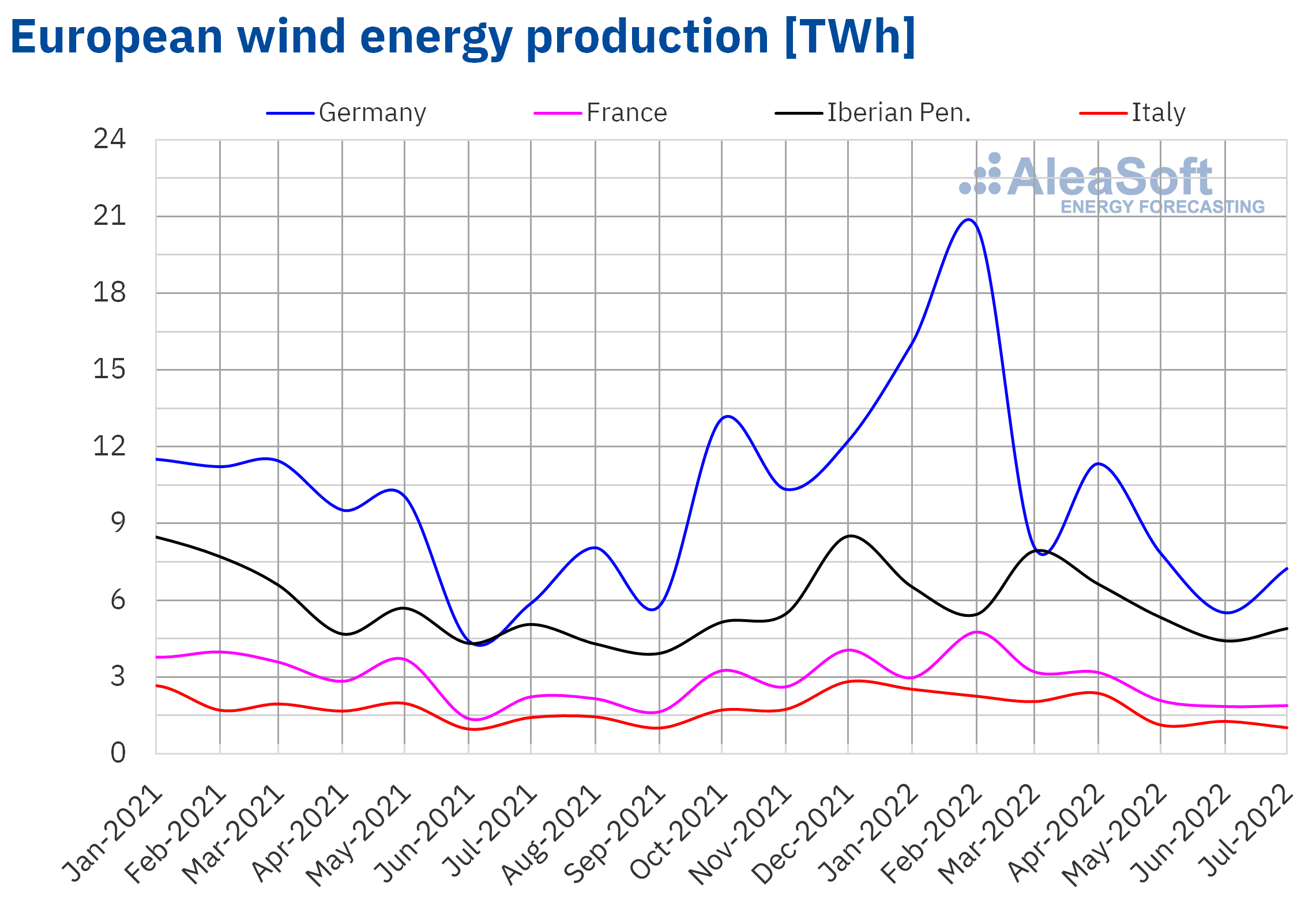 The electricity demand in July 2022 grew in most European electricity markets compared to the same month of the previous year. The largest year‑on‑year increase in demand, of 7.2%, was registered in the Portuguese market. In the markets of Italy, France, Spain and Germany the increases were 3.0%, 2.3%, 2.2% and 1.0% respectively. The increase in temperatures due to the heat wave registered in this period with respect to those registered during the same month of the previous year caused the increases in demand. On the other hand, in the markets of the Netherlands, Great Britain and Belgium, the demand behaved in reverse, registering decreases that were between 10% in the Netherlands and 1.1% in Belgium. 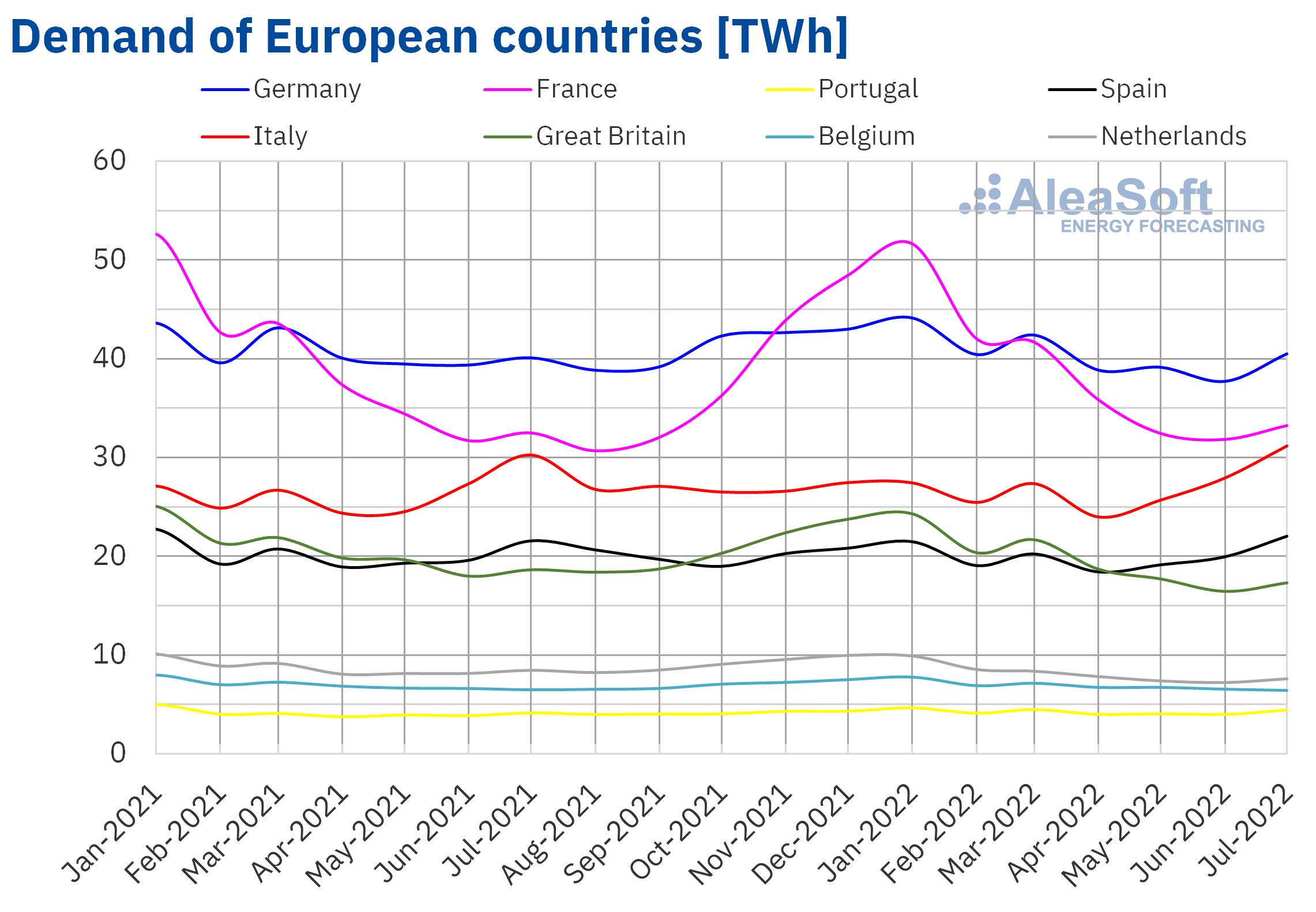 In the month of July 2022, the monthly average price was above €285/MWh in almost all European electricity markets analysed at AleaSoft Energy Forecasting. The exceptions were the Nord Pool market of the Nordic countries, with an average of €94.02/MWh, and the MIBEL market of Spain and Portugal, with €142.66/MWh and €143.80/MWh, respectively. In contrast, the highest monthly average price, of €441.65/MWh, was that of the IPEX market of Italy, followed by that of the EPEX SPOT market of France, of €400.87/MWh. In the rest of the markets, the averages were between €285.92/MWh of the N2EX market of the United Kingdom and €321.33/MWh of the EPEX SPOT market of Belgium.

The high monthly prices registered in the month of July were historical maximums in the markets of Germany, Belgium, France, Italy and the Netherlands. On the other hand, despite the fact that the MIBEL market prices were among the lowest, part of the consumers paid a higher price as compensation for the gas price limitation applied in this market. In the Spanish market, the average of this price was €257.39/MWh in the month of July.

Compared to the month of June 2022, in July the average prices rose in almost all European electricity markets analysed at AleaSoft Energy Forecasting. The exceptions were the Nordic, Spanish and Portuguese markets, with falls of 19%, 16% and 15% respectively. On the other hand, the largest rise, of 63%, was registered in the Italian market, while the smallest increase was that of the German market, of 44%. The rest of the markets had price increases between 46% of the Dutch market and 61% of the French market.

If average prices for the month of July are compared with those registered in the same month of 2021, prices increased in all markets. The smallest rise in prices was that of the Spanish market, of 54%, followed by that of the Portuguese market, of 55%. In the rest of the markets, the price increases were between 74% of the Nord Pool market and 412% of the French market.

Regarding hourly prices, in July hourly prices above €600/MWh were registered in the markets of Germany, Belgium, France, Italy and the Netherlands, reaching a price of €820.87/MWh on July 20 between 9:00 and 10:00 in the French market. In the British market, an hourly price of over £600/MWh was also registered in July.

In contrast, despite the high monthly averages, in July negative hourly prices were reached in the markets of Germany, Belgium and the Netherlands. The lowest hourly price, of ‑€89.95/MWh, was the one registered in the Belgian market on Sunday, July 24, between 13:00 and 14:00.

When comparing with July 2021, the situation was similar. In July 2022, gas and CO2 emission rights prices were much higher than those of the same month of 2021, which contributed to the general rise in electricity markets prices. 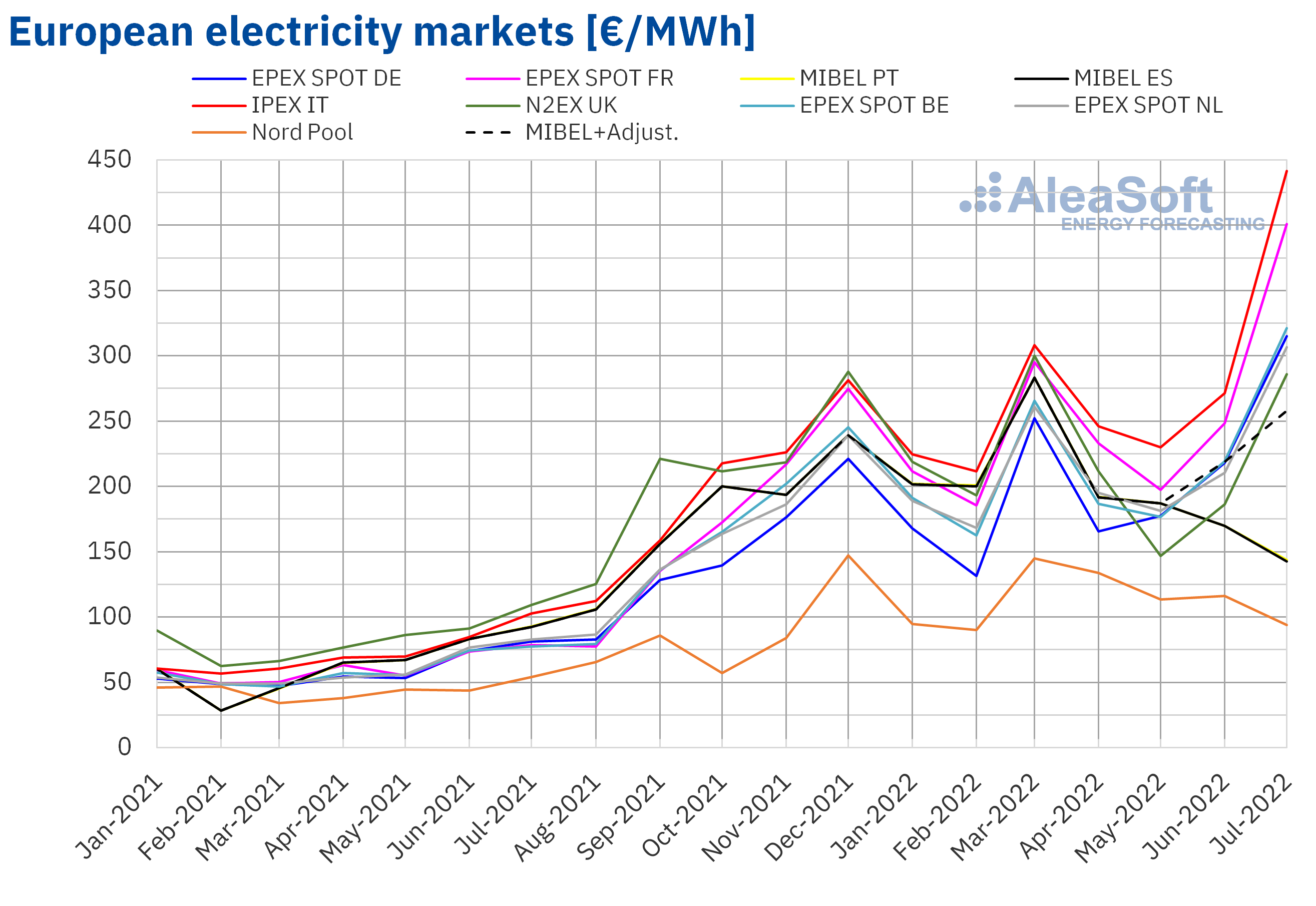 During the recently finished month of July, electricity futures for the next calendar year 2023 registered an upward behaviour. The increases between the first and last sessions of the month range from 18% of the OMIP market of Spain and Portugal for both countries, to 40% registered in the EEX market of the United Kingdom. The NASDAQ market of the Nordic countries and the ICE market of the same region had a settlement price in the last session of the month of €140.00/MWh and €140.43/MWh, respectively. These figures are an indication of the high prices that are currently being registered in the futures markets, since the Nordic region is by far the area with the lowest electricity prices, and the current figures of the prices of this futures product are higher than the values ​​at the beginning of the year in the EEX market of France, which has been the market with the highest prices for most of the year. Precisely, in the last session of July, the settlement price of this market was the highest of the markets analysed at AleaSoft Energy Forecasting, of €497.25/MWh. This figure also represents the highest absolute increase of the month, of €132.96/MWh, which represents a 36% rise. 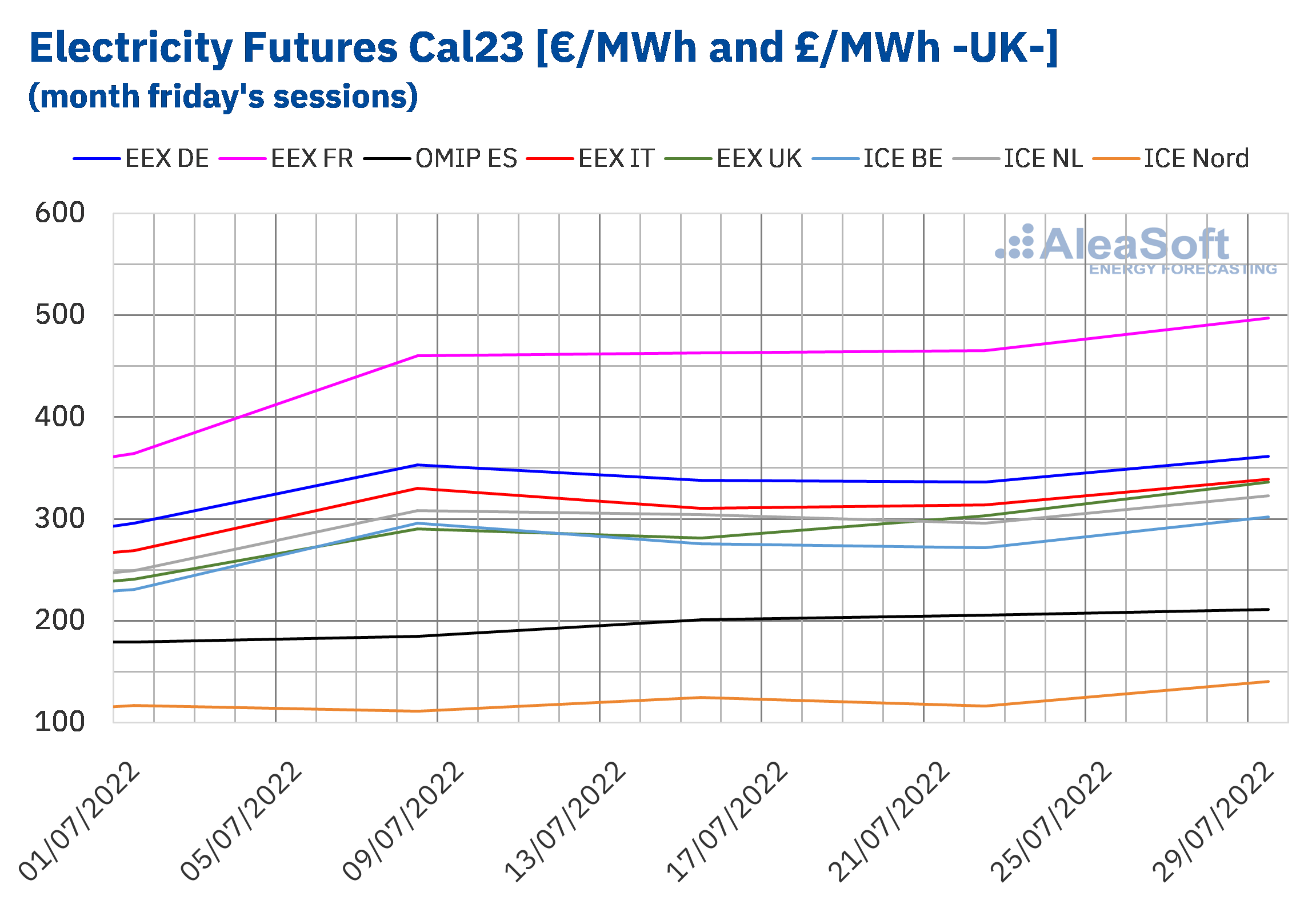 During the month of July, fears of the effects of a possible recession on the demand exerted their downward influence on Brent oil futures prices. In addition, the new outbreaks of COVID‑19 detected in China in the first half of the month also contributed to this behaviour. In this context, the International Energy Agency lowered its demand growth forecasts for 2022 and 2023 in July. 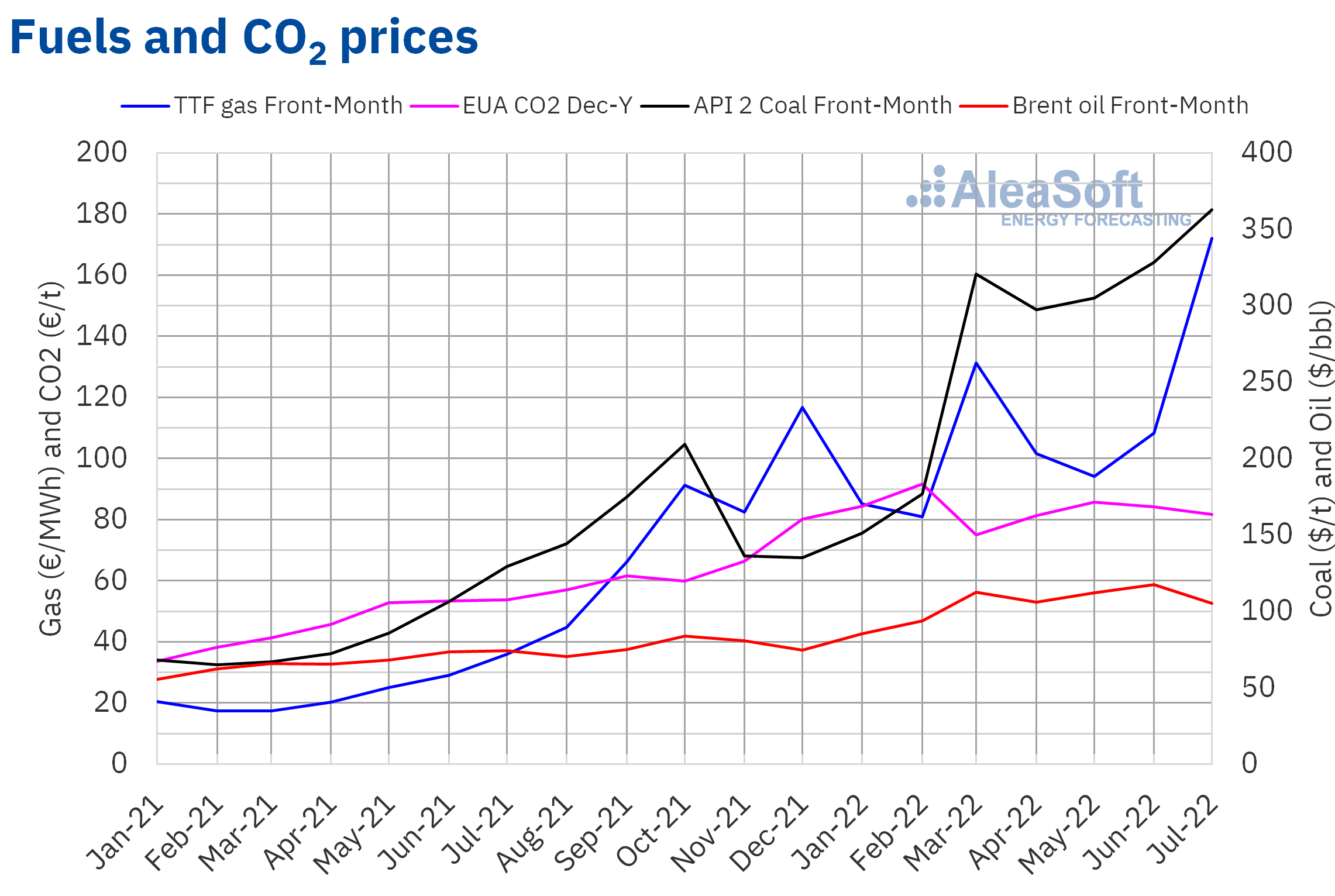 After the vacation period, the series of monthly webinars organised at AleaSoft Energy Forecasting and AleaGreen will be resumed with its 25th edition that will take place on September 15. On this occasion, Jorge Simão, COO at OMIP, and Pablo Villaplana, COO at OMIClear, will participate, to analyse the importance of forward markets and hedging for the renewable energy development. In the subsequent analysis table, after the Spanish version of the webinar, moderated by Antonio Delgado Rigal, CEO of AleaSoft Energy Forecasing, Fernando Soto, Director‑General of AEGE, will also participate to inform and resolve doubts about the auction of renewable energy PPA with electro‑intensive consumers. In addition, as usual, Oriol Saltó i Bauzà, Associate Partner at AleaGreen, will analyse the evolution and prospects of the energy markets.

The registrations for the October edition are also already open, where, together with the guest speakers from Deloitte, the energy markets amid the gas supply crisis will be analysed.

The recording of the last edition of the monthly webinars held on June 14 with the participation of the guest speakers from H2B2, África Castro, Business Development, and Anselmo Andrade, Integrated Product Director, is already available here. On that occasion, the topic analysed was the vision of the future of energy in Europe, green hydrogen as a strategic vector in the energy transition. The participants showed how electrolyser projects for hydrogen production can be individually adapted to the particular characteristics of each purpose, whether to produce hydrogen with surpluses from a photovoltaic or wind power plant, or to produce hydrogen for the transport sector or for the industry using energy from the grid, or for seasonal energy storage. They also highlighted the need for aid and clear and stable regulation for the development of renewable hydrogen.