AleaSoft Energy Forecasting, July 25, 2022. Electricity markets prices in Europe rose due to a combination of an increase in electricity demand and decreases in solar photovoltaic and wind energy production, amid a situation of very high gas prices. Spain and Portugal remain in the low price range due to the gas price cap and a slight drop in temperatures. On the other hand, the Brent oil price continues to fall in the face of fears of a global recession.

For the fourth week of July, the AleaSoft Energy Forecasting’s forecasts indicate a reduction in production in Germany, Spain and Italy. 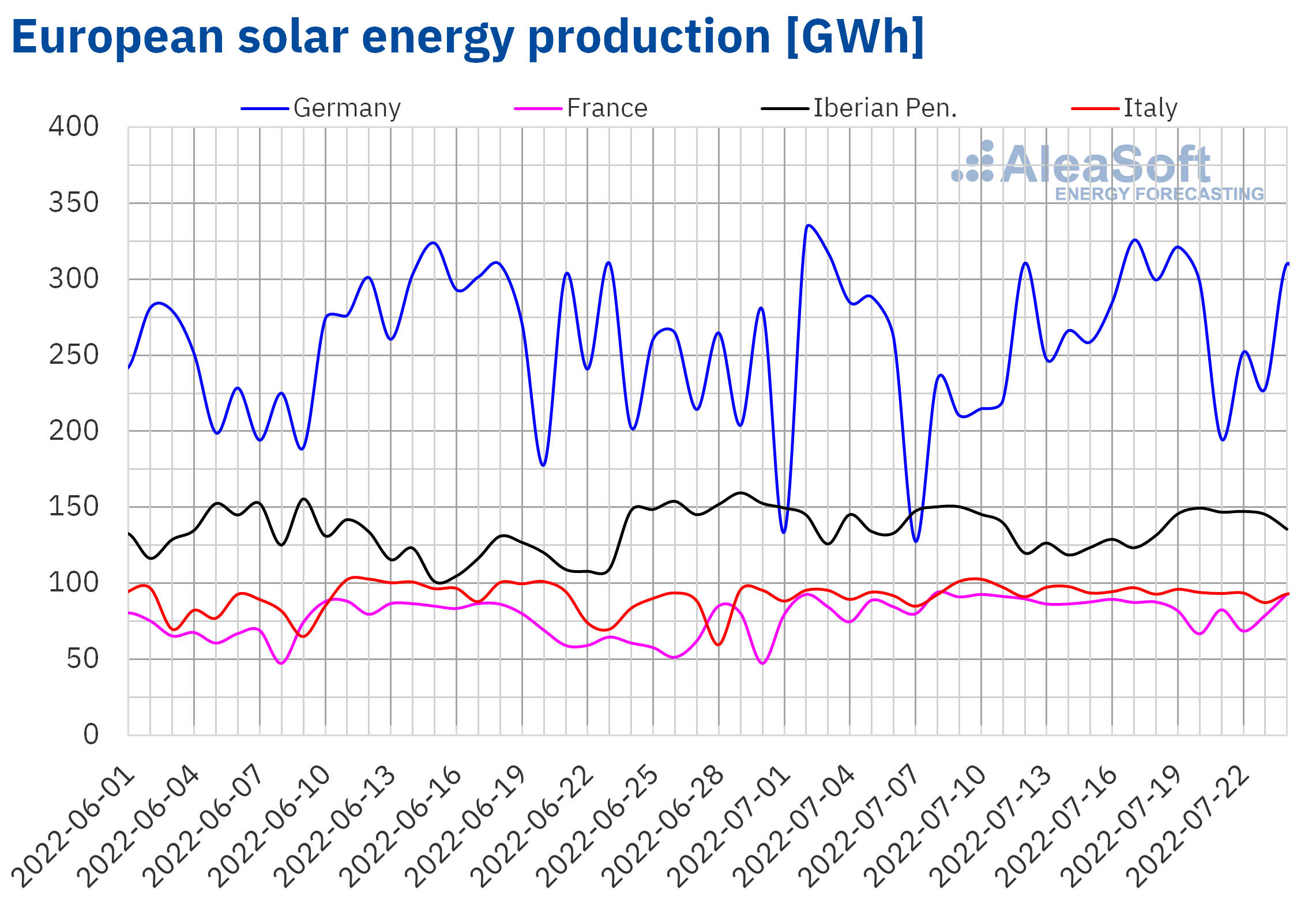 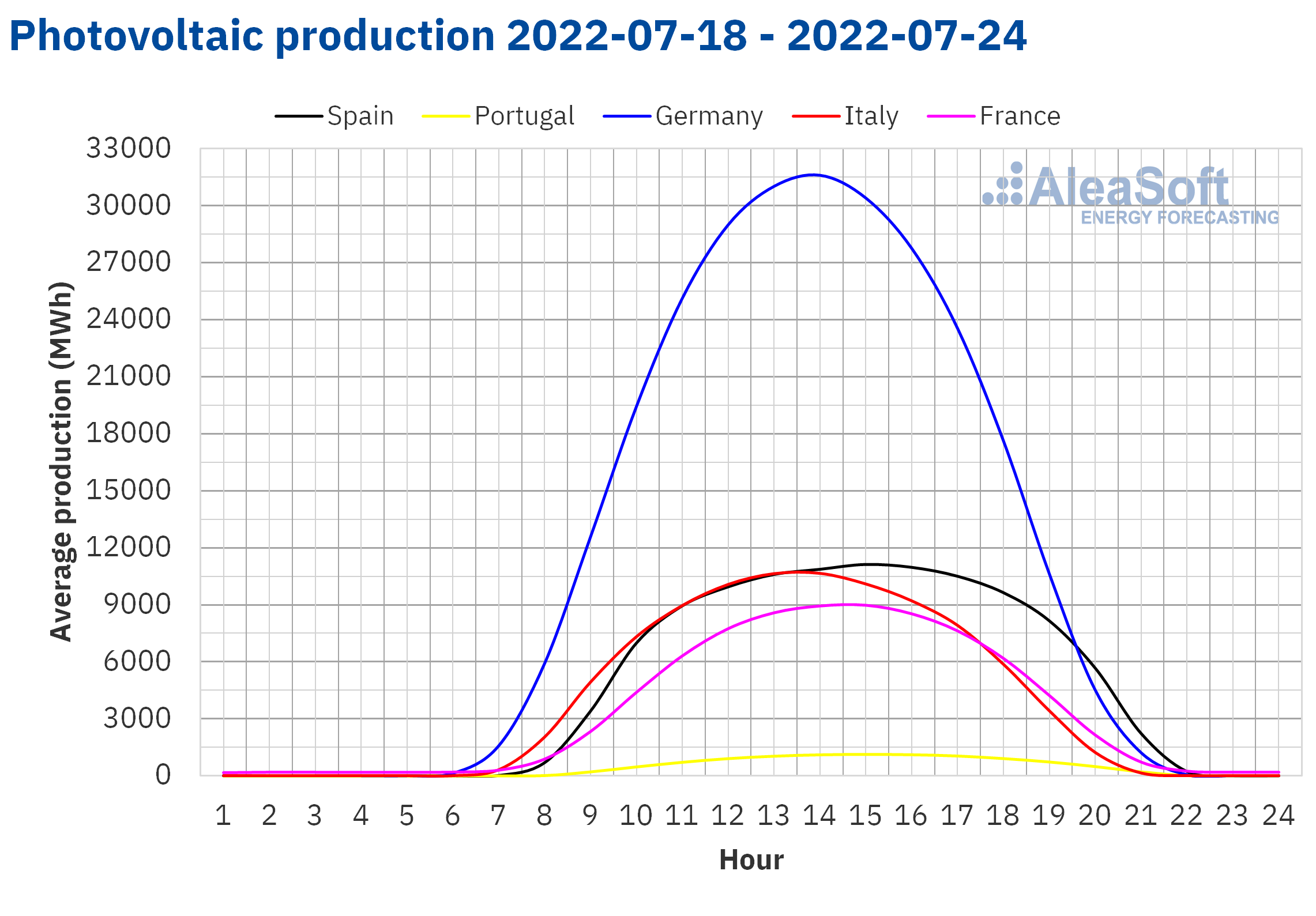 The wind energy production during the week of July 18 increased by 10% compared to the previous week in the Iberian Peninsula. In the rest of European markets analysed at AleaSoft Energy Forecasting, the production with this technology reduced between 4.6% and 20%.

For the week that began on July 25, the AleaSoft Energy Forecasting’s forecasts expect a general increase in wind energy production in the analysed markets. 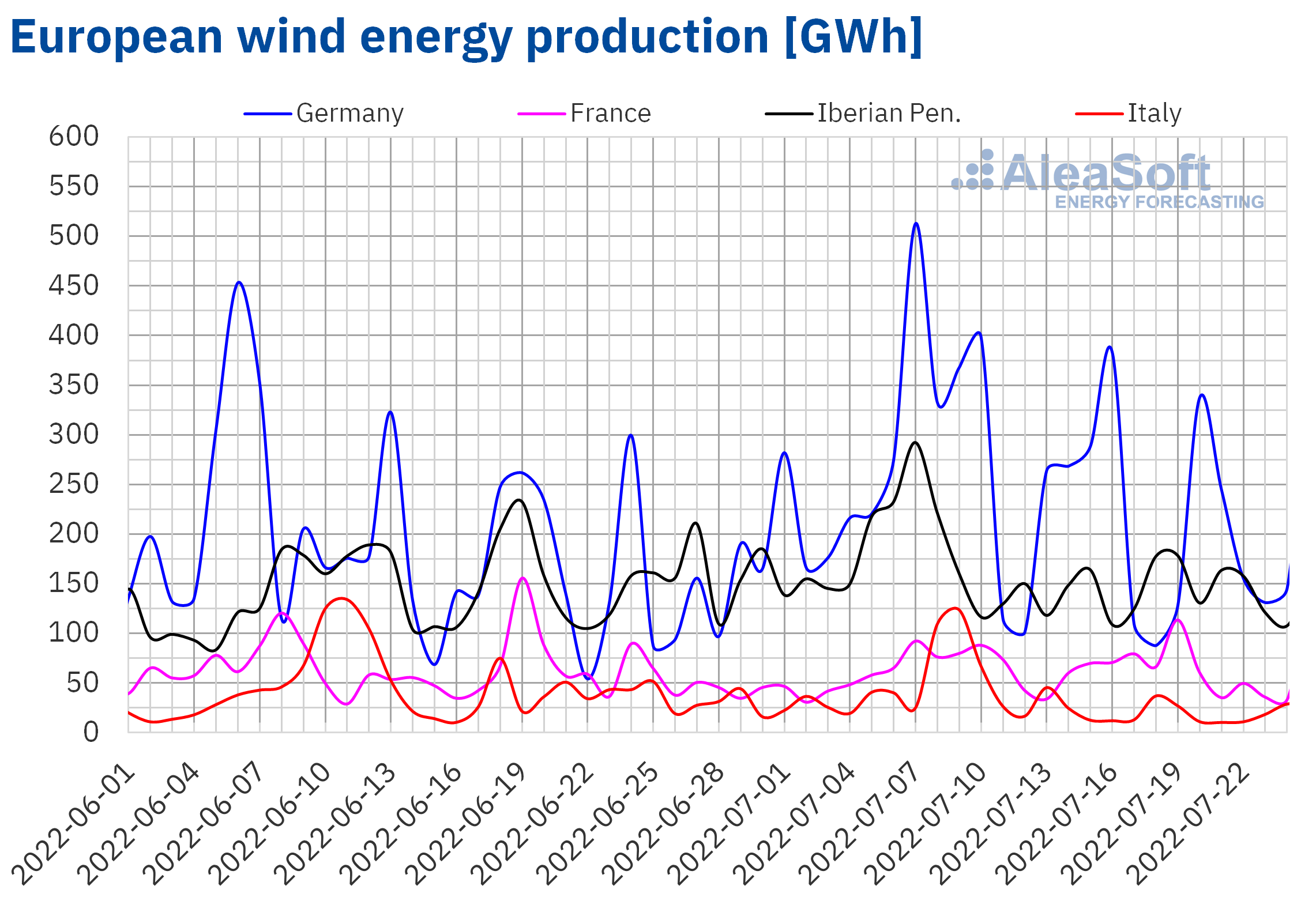 During the third week of July, the electricity demand increased compared to the previous week in most of the analysed European markets. The largest rise was registered in the Italian market, of 7.2%. The market of the Netherlands was the second market with the highest increase in demand, with a variation of 4.6%. In the markets of France, Great Britain and Germany, the increases were 3.8%, 3.3% and 2.1% respectively. These rises were favoured by the increase in average temperatures, mainly in Germany and the Netherlands, where they increased by more than 3 °C during this period.

On the other hand, the demand fell in the markets of Portugal, Belgium and Spain. The largest falls were registered in the markets of Portugal and Belgium, and were 5.4% and 5.2% in each case. In the Spanish market the drop was 0.4%. The decreases in demand of Portugal and Spain in the week of July 18 were favoured by lower temperatures than those registered during the week that preceded it. In the case of Belgium, the decrease in demand was due to a lower labour corresponding to the holiday of Thursday, July 21, the national holiday of Belgium.

For the last week of July, the AleaSoft Energy Forecasting’s forecasts estimate that the demand will decrease in most European markets, favoured by lower temperatures than those registered during the previous week in a large part of the continent. The exceptions will be the markets of Portugal and Italy where the electricity demand is expected to increase. 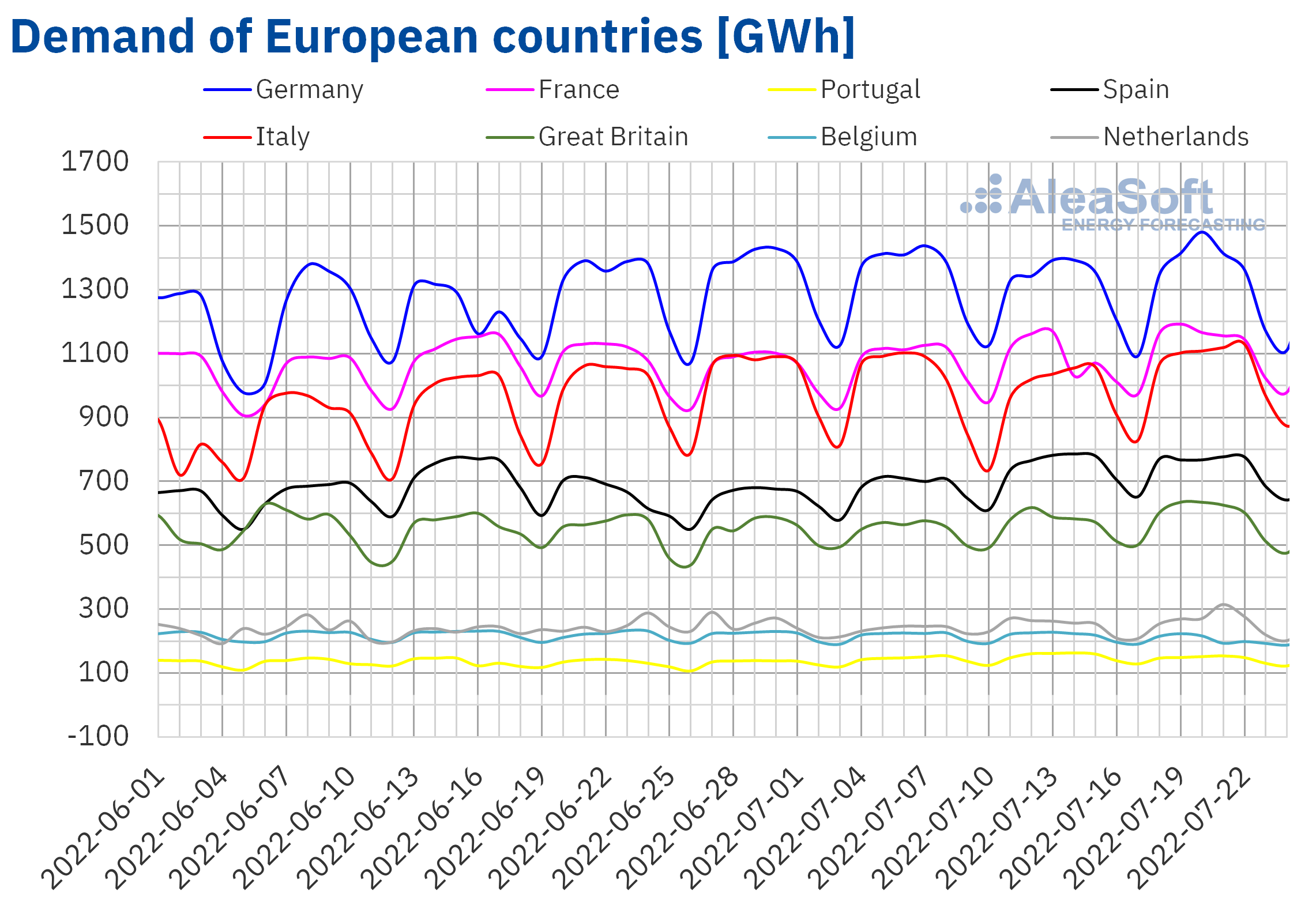 Although the MIBEL market prices were the lowest, part of the consumers must pay a higher price as compensation for the gas price limitation applied in this market. In the Spanish market, the average of this price was €232.26/MWh in the week of July 18, 22% lower than that of the previous week.

The AleaSoft Energy Forecasting’s price forecasts indicate that in the week of July 25 prices of most European electricity markets might fall, influenced by the recovery of the wind energy production and the decrease in demand in most markets. 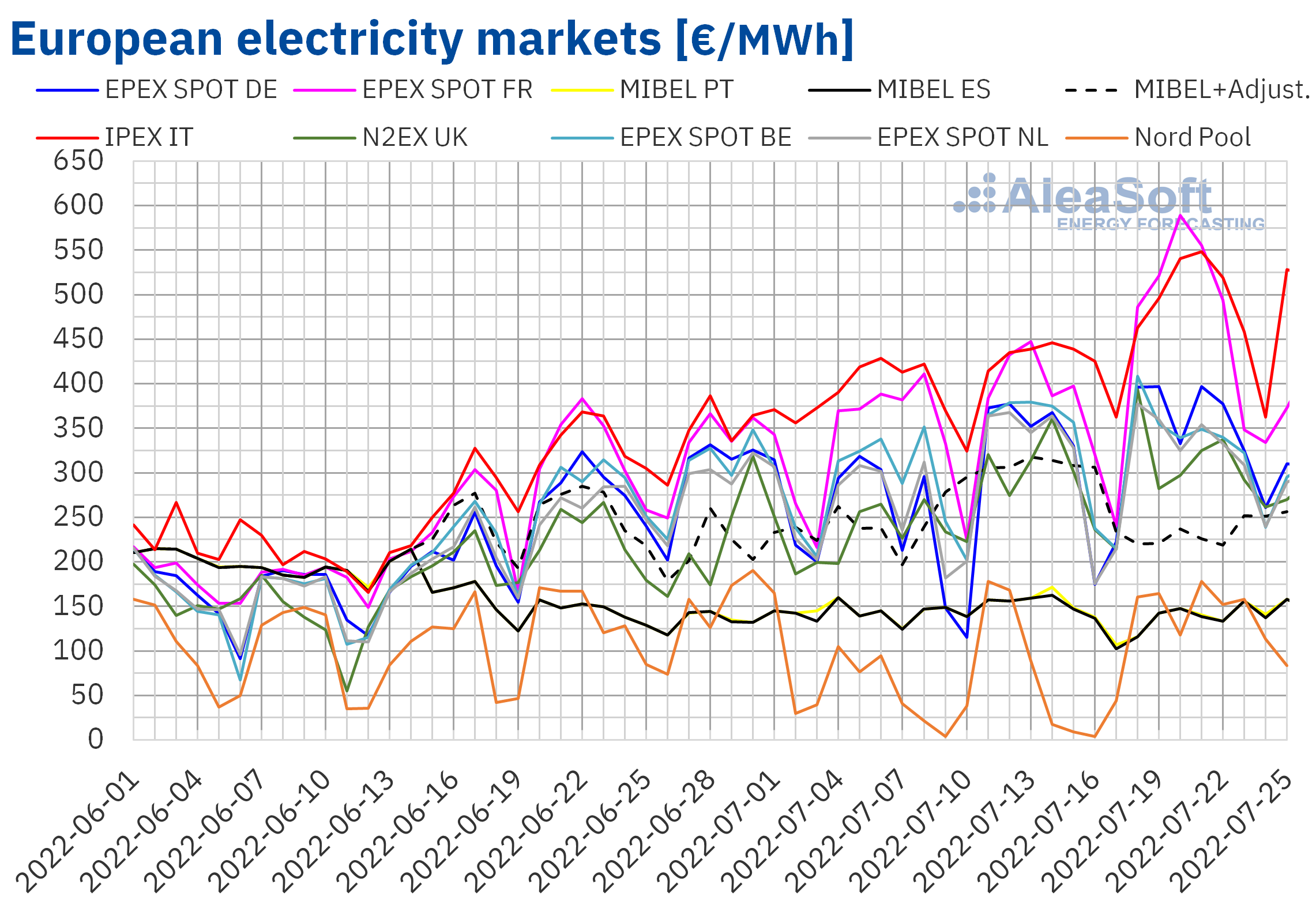 During the third week of July, electricity futures prices for the next quarter registered a heterogeneous behaviour in the markets analysed at AleaSoft Energy Forecasting. In the EEX market of Germany, France and Italy, in the ICE market of Belgium and the Netherlands and in the ICE and NASDAQ markets of the Nordic countries, prices fell between the sessions of July 15 and 22. The most pronounced decreases were those of the markets of the Nordic countries, which reduced their price between 8.5% and 8.9%. In the rest of the markets, prices rose, with the highest increase being registered in the EEX market of the United Kingdom, with a 5.3% increase.

Electricity futures prices for the year 2023 did not register a general trend either. The steepest declines occurred in the ICE and NASDAQ markets of the Nordic countries and were between 6.1% and 6.6%. Prices of the ICE market of Belgium and the Netherlands and the EEX market of Germany also fell. On the other hand, the largest increases in this case were in the ICE and EEX markets of the United Kingdom, with 7.0% and 7.9% rises, respectively. Prices also rose in the OMIP market of Spain and Portugal and in the EEX market of Spain, France, Italy and Portugal.

Brent oil futures for the Front‑Month in the ICE market began the third week of July with increases until reaching a settlement price of $107.35/bbl on Tuesday, July 19, which was the maximum of the week. This price was 7.9% higher than that of the previous Tuesday. However, the rest of the week prices fell and on Friday, July 22, the weekly minimum settlement price, of $103.20/bbl, was registered.

Inflation is affecting the evolution of the economy and exerting its downward influence on the demand, favouring the decline in prices. However, Russian oil supply might decline in the coming months.

As for settlement prices of TTF gas futures in the ICE market for the Front‑Month, the third week of July remained below €160/MWh. The week began with declines and on Tuesday, July 19, the weekly minimum settlement price, of €154.46/MWh, was registered, 11% lower than that of the same day of the previous week. Subsequently, prices began to recover. As a result, on Friday, July 22, the weekly maximum settlement price, of €159.86/MWh, was reached. This price was very similar to that of the previous Friday, only 0.2% higher.

Despite the restoration of the gas supply from Russia through the Nord Stream 1 gas pipeline once the maintenance work was completed, fears of a possible supply cut persist. In this context, on July 20, the European Commission proposed to cut gas demand by 15% over the next few months. On the other hand, in the morning of July 24 there was an incident in the Medgaz gas pipeline, interrupting the gas supply to Spain from Algeria for its repair.

Regarding settlement prices of CO2 emission rights futures in the EEX market for the reference contract of December 2022, the third week of July registered a downward trend. As a consequence, the settlement price of Friday, July 22, was €76.30/t, 11% lower than that of the previous Friday. 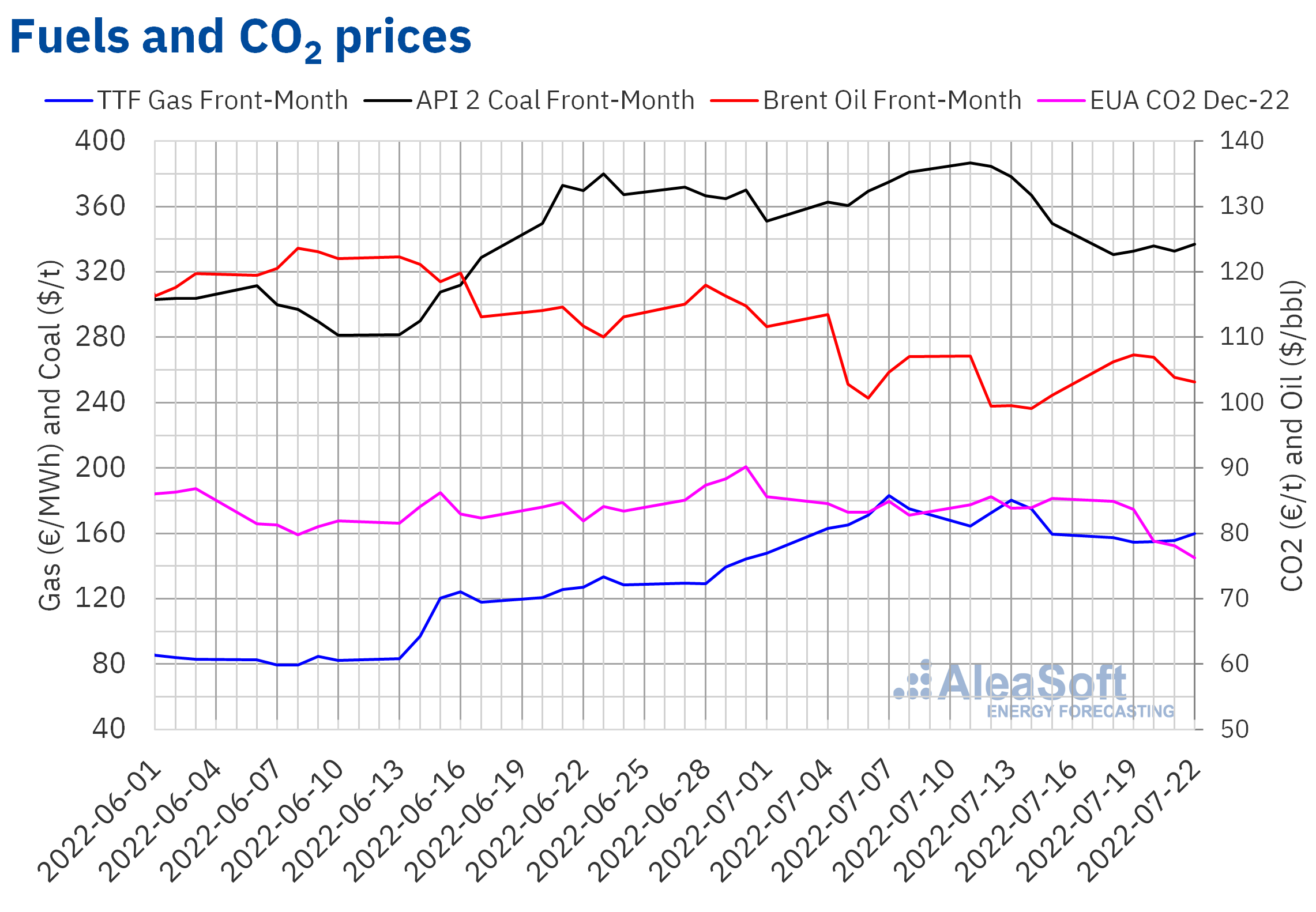 On July 14, the 24th edition of the webinars of AleaSoft Energy Forecasting and AleaGreen was held. On that occasion, the topic to be analysed about the vision of the future of energy in Europe was green hydrogen as a strategic vector in the energy transition. The invited speakers from H2B2, África Castro, Business Development, and Anselmo Andrade, Integrated Product Director, showed how electrolyser projects for hydrogen production can be individually adapted to the particular characteristics of each purpose, either to produce hydrogen with the surplus of a photovoltaic or wind energy plant, either for the production of hydrogen for the transport sector or for industry using energy from the grid, either for seasonal energy storage. They also highlighted the need for aid and clear and stable regulation for the development of renewable hydrogen. In the webinar, Oriol Saltó i Bauzà, Associate Partner at AleaGreen, carried out the usual analysis of the European energy markets in recent weeks and of the prospects for the coming months. The recording of the webinar can be requested here.

The next edition of the monthly webinars, number 25, will take place on September 15, after the vacation period. On this occasion, there will be the participation of Jorge Simão, COO at OMIP, and Pablo Villaplana, COO at OMIClear, who will analyse the importance of forward markets and hedging for the renewable energy development. Fernando Soto, Director‑General of AEGE, will participate in the analysis table of the Spanish version of the webinar to talk about the auction of renewable energy PPA with electro‑intensive consumers. As usual, Oriol Saltó i Bauzà will analyse the evolution and prospects of energy markets.