AleaSoft, September 12, 2019. In AleaSoft, an analysis of the behaviour of the MIBEL electricity market and the rest of European markets so far this week was carried out. With the high wind energy production, the prices of the MIBEL electricity market in Spain and Portugal have fallen in this period compared to the same days last week. The prices of electricity and gas futures rose after some problems were found in France’s nuclear plants, which have generated concern in the markets.

The price of the MIBEL market in Spain and Portugal continued to fall earlier this week, after there was a decrease of ‑18% last week compared to the previous week. The average prices for the first four days of the current week, corresponding to the days of September 9 to 12, were €37.66/MWh for Spain and €37.73/MWh for Portugal, reducing by ‑7.8% over the same period of the previous week for both countries. According to the analysis carried out in AleaSoft, the decrease in electricity demand compared to the same period last week, together with the increase in wind energy production, favoured the fall in prices. During the first three days of this week, the average wind energy production in Mainland Spain increased by 54% compared to that recorded between September 2 and 4. For this same period, the coal energy production increased by 25%, while the combined cycle gas turbine production decreased by ‑40%.

In yesterday’s session Wednesday, September 11, the prices in the MIBEL market, as well as the futures, started to rise following the news published by EDF about the investigations of French nuclear plants, due to possible damage to one of its components, as well as the prices of electricity futures for fear of an unexpected closure of French nuclear plants. The settling prices for September 12 increased by €4.1/MWh compared to the previous day.

So far this week, the EPEX SPOT markets in Germany, France, Belgium and the Netherlands have increased between 5.8% and 10% over the same period of the previous week, with the markets in Germany and the Netherlands being those of higher increase and those that settled higher on that group, with €38.51/MWh and €38.29/MWh, respectively. The Nord Pool market price has been the lowest so far this week, settling at €33.67/MWh and with a variation of ‑5.4% compared to last week. On the other hand, the IPEX market in Italy, despite having decreased by 11% in relation to the same period of the previous week, continues to be the highest‑priced European market analysed with an average of €48.25/MWh this week, followed by the N2EX market in Great Britain, which settled at €41.08/MWh. 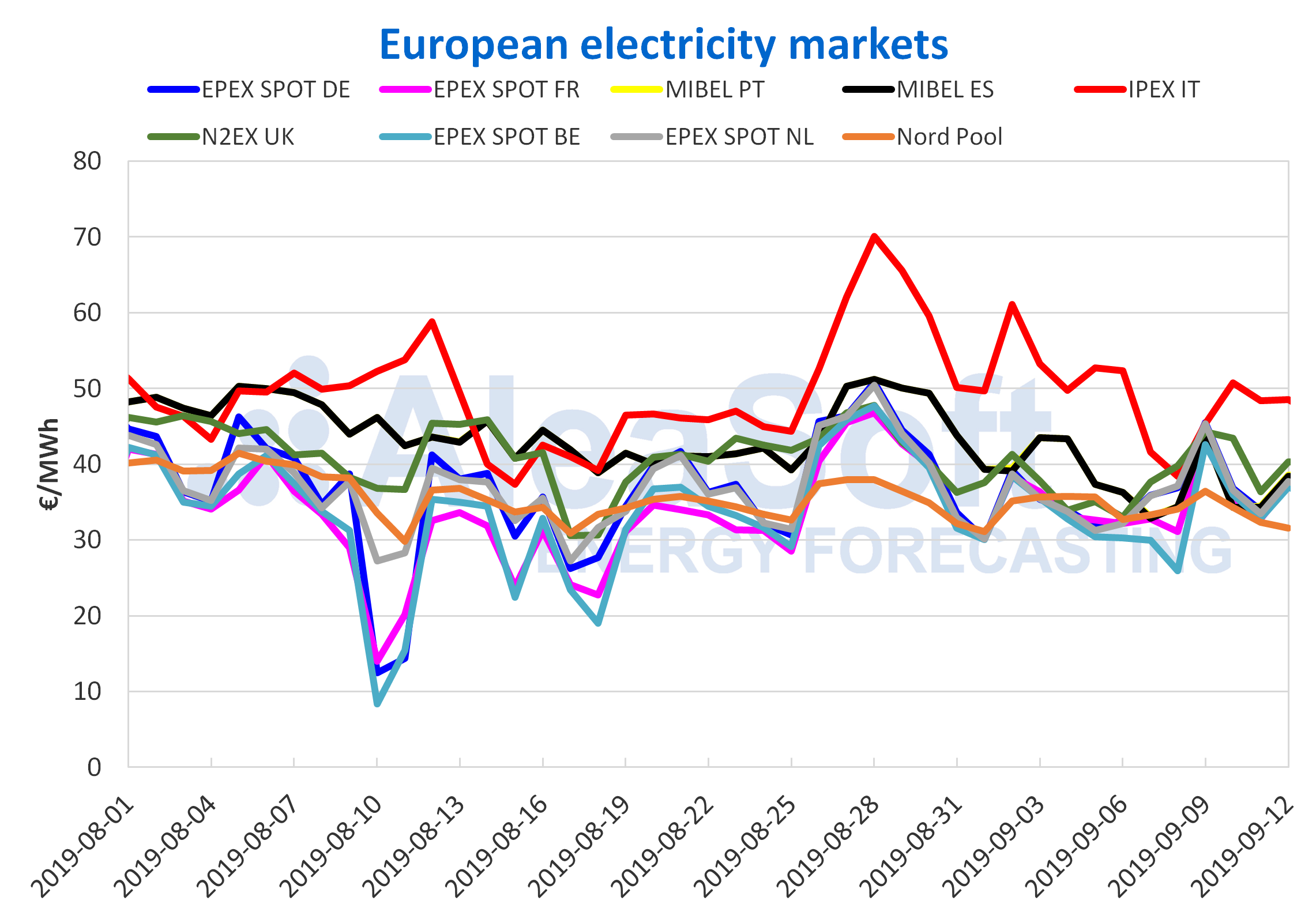 The prices of Brent oil futures for the month of November in the ICE market began this week with a value higher than those reached the previous week, to subsequently experience a downward trend. A price of $62.59/bbl was reached on Monday, exceeding the settling price of Friday, September 6, by 1.7%. In the following days this price fell, settling at $60.81/bbl yesterday September 11, $1.78/bbl below the settling price of Monday. This fall was influenced by the downward revision by OPEC+ of its demand forecasts for 2019 and 2020, based on projections of lower economic growth.

The price of TTF gas futures in the ICE market for the month of October experienced a sharp rise on Tuesday, September 10, reaching a value of €14.40/MWh. This rise represents an increase of 18% compared to the price on Monday and a maximum of the last 7 weeks. Yesterday the price fell slightly to €14.36/MWh, with a difference of ‑0.3%. These prices, higher than those reached in previous weeks, were influenced by the news of possible problems in the French nuclear power plants, which could cause the reduction of electricity supply by these plants, coinciding with the colder months. They were also influenced by the fact that the Netherlands will reduce its gas production from October 1. However, the increase in gas supply from Norway to the rest of Europe led to the slight price decline observed yesterday Wednesday, September 11.

This week, the prices of API 2 coal futures in the ICE market for the month of October have continued with the upward trend that began at the end of August. The most pronounced rise occurred on Tuesday, coinciding with the news about the nuclear power plants in France, reaching a price 5.1% higher than Monday. The settling price of yesterday Wednesday was $62.55/t, 8.3% higher than Wednesday, September 4, although ‑0.2% lower than this Tuesday.

The prices of CO2 emission rights futures in the EEX market for the December 2019 reference contract started this week with a value of €25.02/t. On Tuesday, this value was exceeded by 6.8%, reaching €26.72/t, given the prospect of a possible decline in nuclear energy production in France, which would boost gas and coal generation. Yesterday, the price reached was a little lower, staying at €26.27/t.

The prices of Spain’s electricity futures for the fourth quarter of 2019 in the OMIP and EEX markets, and Portugal’s futures in the OMIP market settled yesterday with an 11% week‑on‑week rise. These values were compared to those of the end of July, after they reached last Tuesday their minimum value in the mobile year.

The historical maximums of the electricity futures for the year 2020 were reached in the session of last Tuesday, both for the OMIP and EEX markets in Spain, as well as for the OMIP market in Portugal. On that day, the settling value in the EEX market in Spain was €57.60/MWh, while in the OMIP market, the negotiated prices were €58.25/MWh and €58.60/MWh for Spain and Portugal, respectively.

Yesterday, the prices of futures for next year ended 2.9% above those of the session of Wednesday of the last week, both in the OMIP and EEX markets in Spain and in the OMIP market in Portugal.

The futures of France for the next quarter in the EEX market, settled yesterday Wednesday, September 11, at €61.63/MWh, which represented an increase of €10.51/MWh in week‑on‑week terms. The widespread fear of a future deficiency of French nuclear energy production triggered prices causing the largest cross-weekly rise of this product since March 2018. This volatility also affected the German market in EEX that ended at the settling of yesterday’s session at €48.88/MWh, with an increase of 10% compared to last Wednesday.

The nuclear power plants this week have maintained a stable operation. This stability should be maintained in the coming weeks, because there are no scheduled nuclear shutdowns at the moment.

The hydroelectric energy production fell by 4.2% from Monday to Wednesday of this week compared to the same period last week. 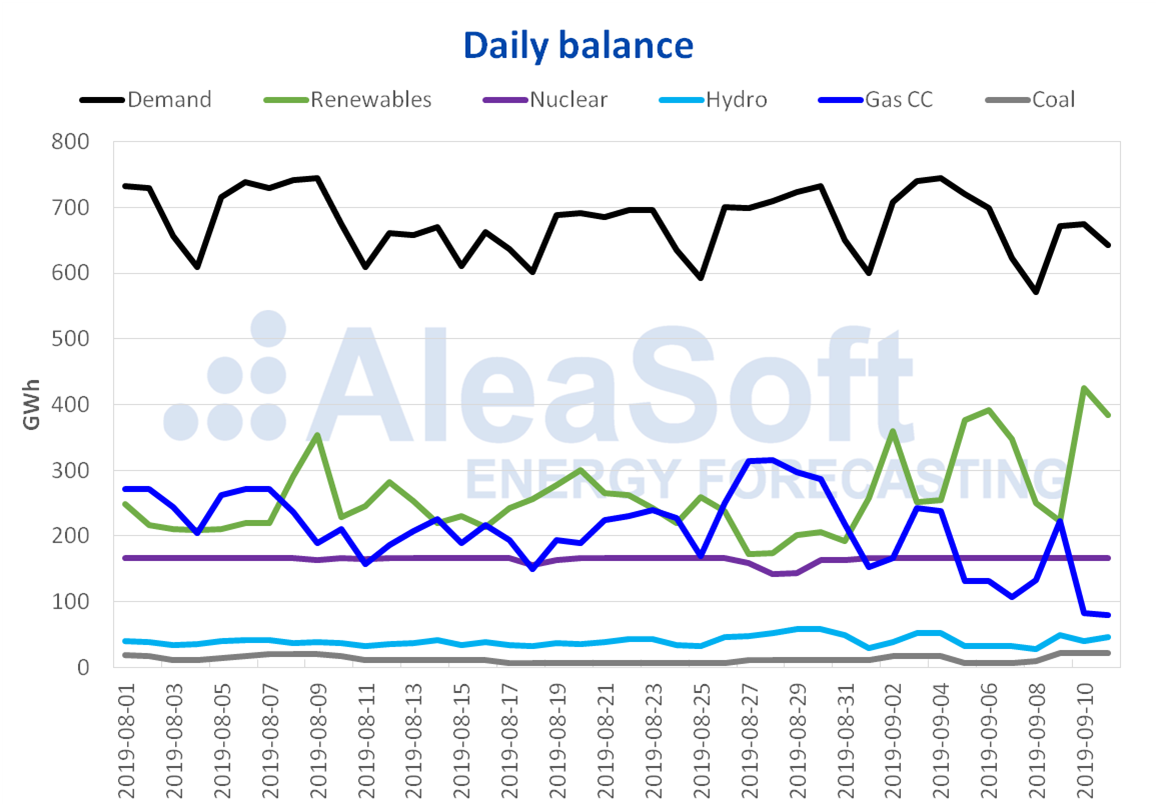 The level of the hydroelectric reserves is currently 8646 GWh, which represents a decrease of 298 GWh compared to the previous week. The current reserves constitute 37% of the total capacity of 23 281 GWh, 77% of the available one a year ago, 84% of the average of the last 5 years and 82% of the average of the last ten years according to data from the latest Hydrological Bulletin of the Ministry for the Ecological Transition.