The brent oil futures prices for the month of November in the ICE market increased over the last week. The settling price on Friday, September 6, was $61.54/bbl, 3.9% higher than the price of the Friday of the previous week. This price exceeded the maximum price reached during the past month, $61.32/bbl, on Friday, August 2. The upward trend of last week was reinforced by statements made at the end of last week by the United States Federal Reserve that the economy would continue to grow moderately. Thus, continuing with this trend, the settling price of yesterday Monday was $62.59/bbl.

The price of TTF gas futures in the ICE market for the month of October began the week of September 2 with a value of €11.85/MWh, which is the lowest settling price achieved in the last two years . During the past week, the gas prices gradually increased to €12.35/MWh at the end of the session on Friday, September 6, obtaining a weekly average of €12.10/MWh, which represents a decrease of 2.6% over the average of the previous week.

The prices of API 2 coal futures in the ICE market for the month of October, during the first week of September, experienced an upward trend. At the end of the week, the settling price on Friday, September 6, was $58.75/t, 4.7% above the price obtained on Friday, August 30. The greatest difference between last week’s prices occurred on Tuesday, September 3, with a settling price of $58.05/t, exceeding the price of the previous day by $1.5/t.

The CO2 emission rights futures in the EEX market for the December 2019 reference contract ended last week with a price of €25.09/t. This market remained at around €25/t throughout the week, reaching the maximum price of the week, €25.54/t, on Thursday, September 5, occurring a decrease of €-0.5/t the following Friday. Last week’s average price for CO2 emission rights futures decreased by 2.7% compared to the average price of the previous week. The evolution of this market in these days was conditioned mainly by the decisions made around Brexit and a possible extension to avoid leaving the European Union without agreement. 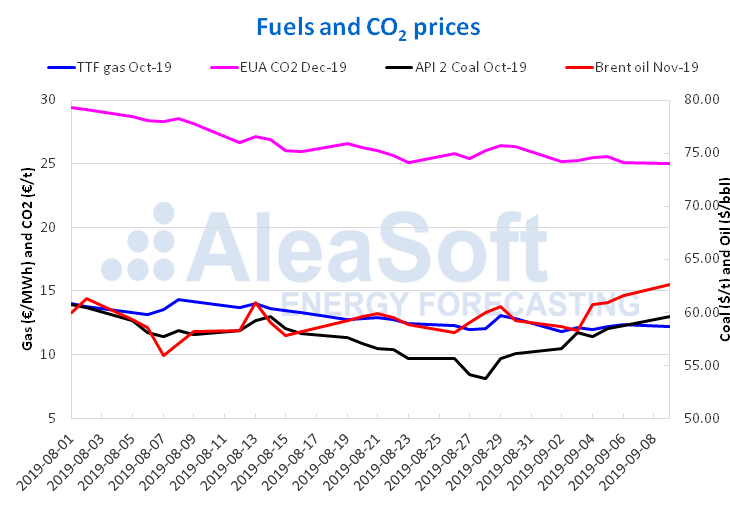 The IPEX market in Italy was the one with the highest price in Europe for most of the past week, with an average weekly value of €49.90/MWh, with the exception of Sunday, September 8, when it was surpassed by the British N2EX that reached the highest price for that day of €39.81/MWh. The other two markets of the highest price group, the Iberian MIBEL and the British N2EX, had prices over €37/MWh last week. The Nord Pool and EPEX SPOT markets in Germany, France, Belgium and the Netherlands had values between €31/MWh and €35/MWh. The Belgian market was the one with the lowest price, with a weekly average of €31.91/MWh.

This week has begun with significant increases in most markets. The prices of yesterday Monday, September 9, rose about €10/MWh compared to last week’s average in the EPEX SPOT markets in Germany, France, Belgium and the Netherlands. In the MIBEL and N2EX markets an approximate increase of €6.0/MWh was perceived and in the Nord Pool market the increase was €1.9/MWh, while the IPEX market suffered a decrease of €-4.6/MWh. On the other hand, the settling prices for today, September 10, have fallen again in most markets, with the exception of the IPEX market, which has ended at €50.78/MWh, €5.5/MWh above the price matched the day before. 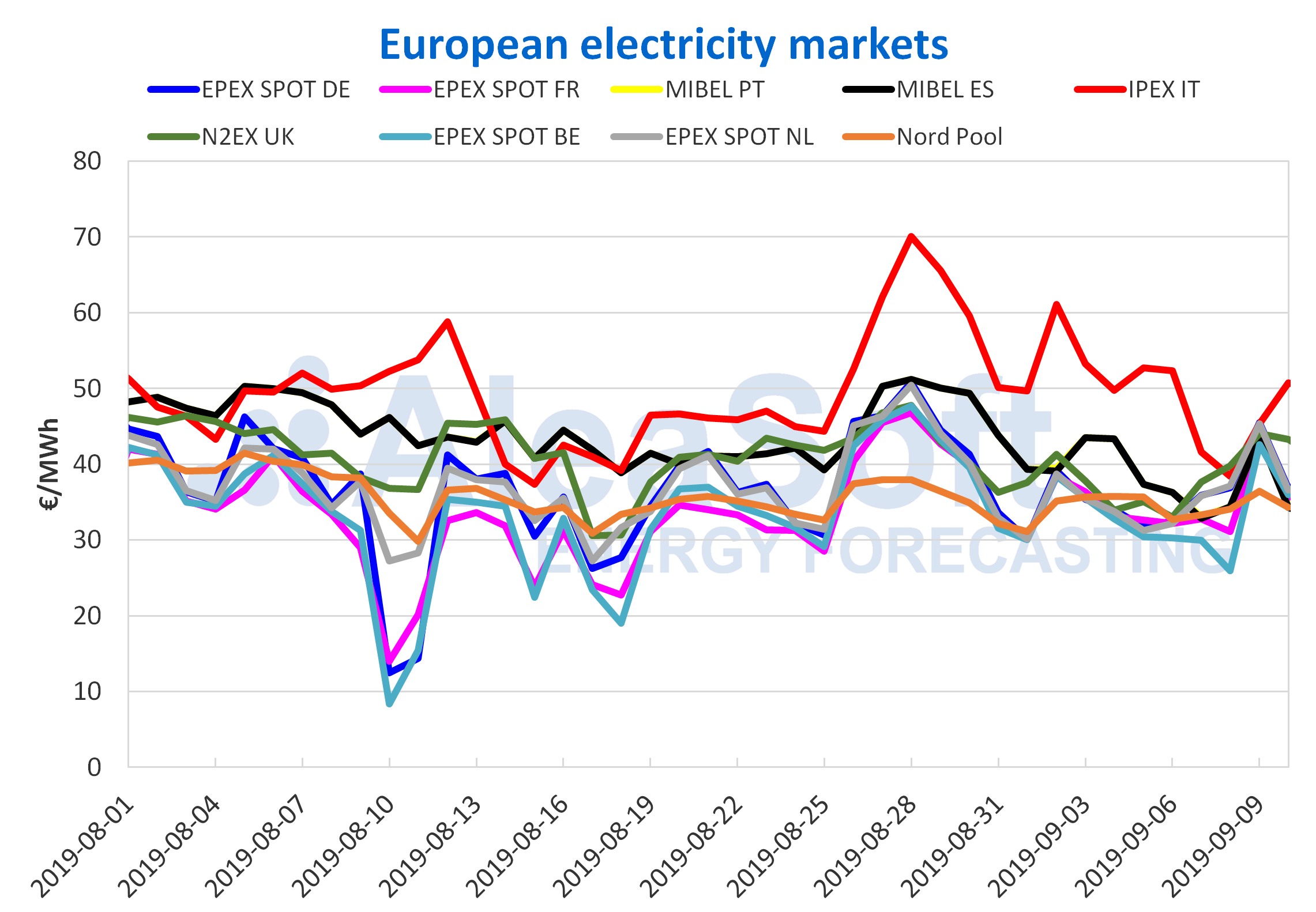 The prices of electricity futures during the past week remained down for both the next quarter and for the year 2020, except in the case of the GME-operated MTE market where no changes were appreciated. The ICE market in the Nordic countries had the biggest decrease for the last quarter of this year, which was -6.4%. In general, the analyzed markets of ICE and Nasdaq were the ones that fell the most in the last week for the fourth quarter of 2019, followed by the EEX markets in Germany and France.

As for futures prices for next year, the markets of the Nordic countries had the largest decline with ‑4.2% and ‑3.9% in ICE and Nasdaq, respectively.

Last week, the wind energy production doubled in most European countries analyzed compared to the previous week. It was the second week with the highest rate of increase in the last two years, with an increase of 133% in all the countries analyzed. Among these increases, the 220% increase in Italy stands out. The significant increases in Spain and Portugal were 190% and 179%, respectively.

Last week, in Germany was also generated with this type of technology more than double the production of the week of August 26, obtaining 1668 GWh, which represented an increase of 109%. In contrast, in France the 75% increase in wind energy production was a bit more discreet. During this week, AleaSoft expects a drop in wind energy production in Portugal and France, and values equivalent to those of last week in the rest of the countries analyzed. 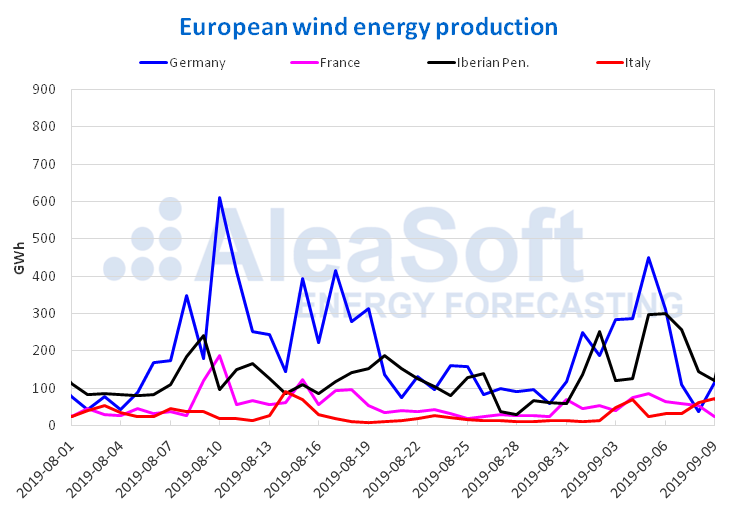 In the week just concluded, the solar energy production in Spain, including photovoltaic and solar thermal technologies, was very similar, only 0.9% higher than that recorded in the week of August 26. In the case of Italy and Germany, the generation with this renewable source decreased by ‑9.5% and ‑22%, respectively. 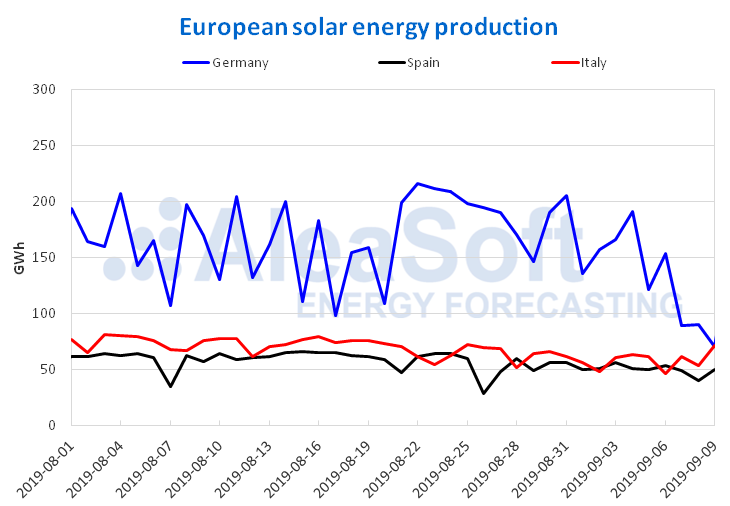