AleaSoft, September 16, 2019. AleaSoft analyses the prices in the fuel markets, CO2 emission rights, European electricity markets and renewable energy production in the week of September 9, which was characterized by rising prices in most of the electricity markets analysed with respect to the previous week. The prices of fuels used for power generation also rose during this period. The wind and solar energy productions behaved differently in the countries analyzed.

The Brent oil futures for the month of November in the ICE market started last week reaching a price of $62.59/bbl on Monday, September 9, this price being 6.7% higher than the price of the Monday of the previous week. However, prices fell throughout the week and the settling price on Friday, September 13, was 2.1% lower than the settling price of Friday of the previous week, remaining at $60.22/bbl. However, it is estimated that these prices will increase in the coming days due to the attacks suffered during this weekend at two oil facilities in Saudi Arabia, which have caused the reduction of production in this country by more than half.

The price of TTF gas futures in the ICE market for the month of October experienced an upward trend last week. At the close of the session on Friday, September 13, the price reached was €14.71/MWh, 19% above the settling price of Friday of the previous week. The most pronounced increase occurred last Tuesday, when the settling price was €14.40/MWh, 18% higher than the settling price of the previous day. This significant increase came after problems were reported in some French nuclear power plants, which led to fears of shutdowns. The price continued to rise at the end of the week, especially on Friday, with a rise of 1.7% compared to Thursday, coinciding with the news that Germany intended to reduce the entry of gas from Russia.

The prices of API 2 coal futures in the ICE market for the month of October during the past week reached values higher than those of the previous week. At the end of the week, the settling price was $62.55/t, 6.5% higher than that of the previous Friday. The biggest increase of this week occurred on Tuesday, September 10, when a price of $62.65/t was reached, $3.05/t higher than that of Monday. The rest of the week the prices remained more stable, ranging between $62.55/t and $62.85/t.

The CO2 emission rights futures in the EEX market for the December 2019 reference contract, ended last week with a price 5.2% higher than the one obtained the previous Friday. After the rise on Tuesday, September 10, of 6.8% compared to Monday, prices stabilized during the rest of the week. At the close of the session on Friday, September 13, the price was €26.40/t, €1.31/t higher than Friday, September 6. 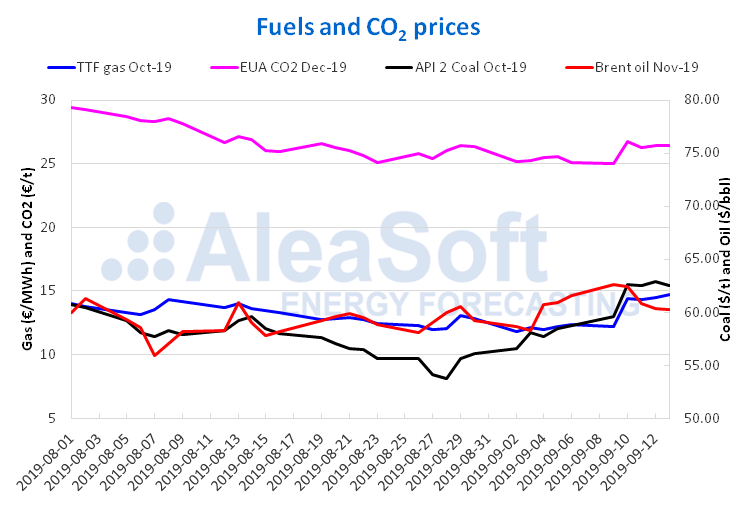 In the recently completed week, the electricity demand increased in most of the countries analysed, as temperatures for those countries increased between 0.1°C and 1.1°C. In the case of Spain, Portugal and Italy the demands decreased as well as the temperatures, with Spain being the one with the greatest drop, of ‑7.5% compared to the previous week, due to the holiday of September 11 in Catalonia and the temperature drop of ‑1.9°C. The wind energy production increased to a lesser extent in the continent, with an average of 0.8% compared to the previous week. France was the country with the largest drop in wind energy production, of ‑36%, and Italy the fastest growing, with 30%. As for solar energy production, during the past week Germany and Italy increased by 6.4% and 20% respectively, while Spain suffered a ‑29% decrease.

The IPEX market in Italy was the one with the highest price in Europe for most of the past week, with a weekly average value of €47.09/MWh, with the exception of Monday, September 9, when it was displaced by the EPEX SPOT market in Germany, which reached the highest price for that day, of €45.51/MWh. In the group of markets with higher prices, last week the British N2EX closed with an average price of €41.55/MWh and MIBEL between €37.84/MWh in Spain and €37.88/MWh of Portugal. The EPEX SPOT markets in Germany, France, Belgium and the Netherlands had values between €35.75/MWh and €37.15/MWh. The Nord Pool market was the lowest priced, with a weekly average of €31.19/MWh.

This week has begun with significant increases in most markets. Prices for today Monday, September 16, rose about €11/MWh compared to last week’s average in the EPEX SPOT markets in Germany, France and Belgium. In the MIBEL and EPEX SPOT markets in the Netherlands an approximate increase of €10/MWh was perceived and in the IPEX and N2EX markets the increase was around €7.42/MWh, while the Nord Pool market suffered a decrease of €‑1.58/MWh. 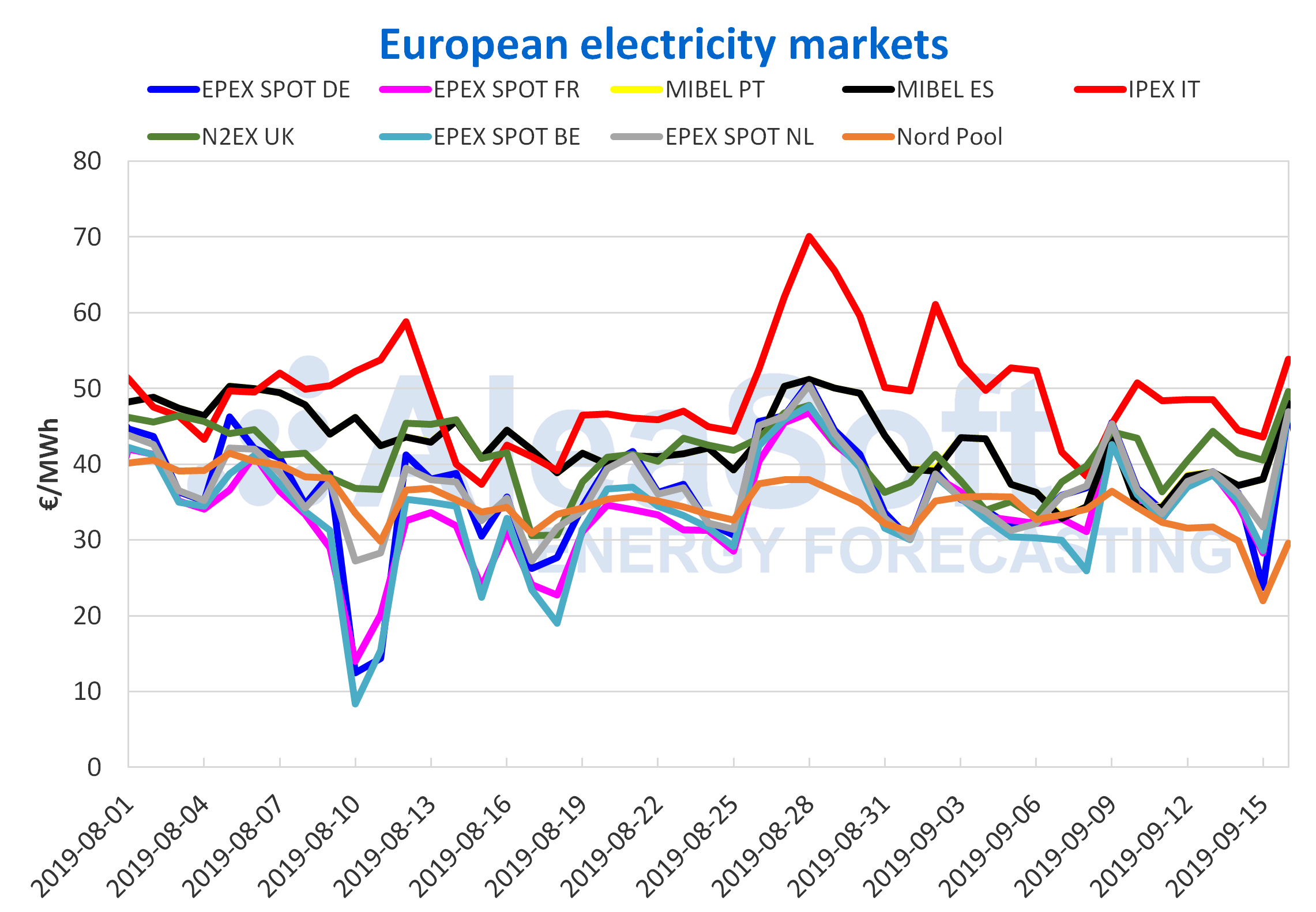 The prices of European electricity futures for the fourth quarter of 2019 ended last week with substantial increases in all markets compared to the previous week. The EEX market in France stands out with a 17% rise, mainly due to the widespread fear of a future deficiency of French nuclear energy production that triggered the prices, causing the largest cross-weekly rise in this product since March 2018. The markets with less variation were the MTE market in Italy operated by GME with an increase of 1.8% and the ICE and NASDAQ markets of the Nordic countries that closed last week with an increase close to 5.8%. The rest of the markets registered increases higher than 9.3%.

Similarly, although to a lesser extent, futures for the year 2020 recorded a general increase in all markets between 2.4% and 7.6% on Friday, September 13, compared to Friday, September 6. The exception was the Italian MTE market operated by GME that remained stationary at €59.10/MWh. 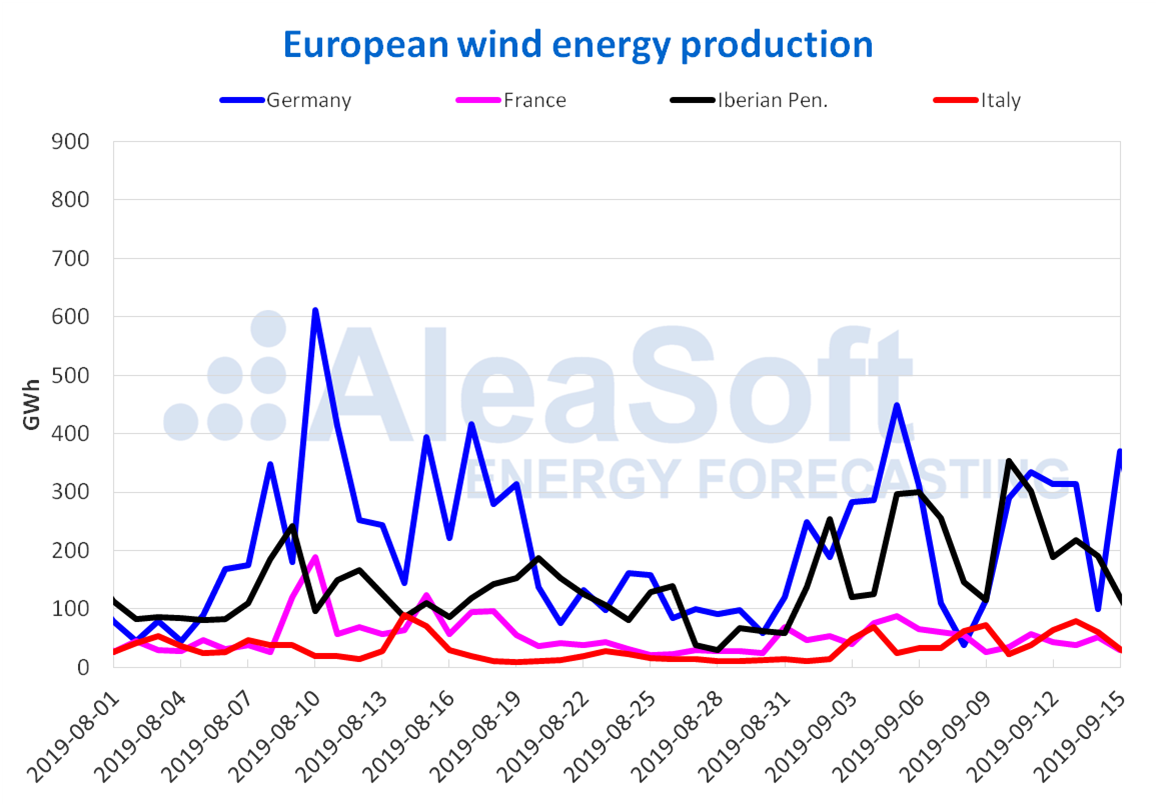 The solar energy production, which includes photovoltaics and solar thermal, decreased by about ‑29% in Spain. While in Germany and Italy rose 6.4% and 20% respectively. For this week of September 16, in AleaSoft a moderate fall in the solar energy production of Italy and a production a little higher than last week in Spain are expected. In the case of Germany, it is expected to remain with little variation. 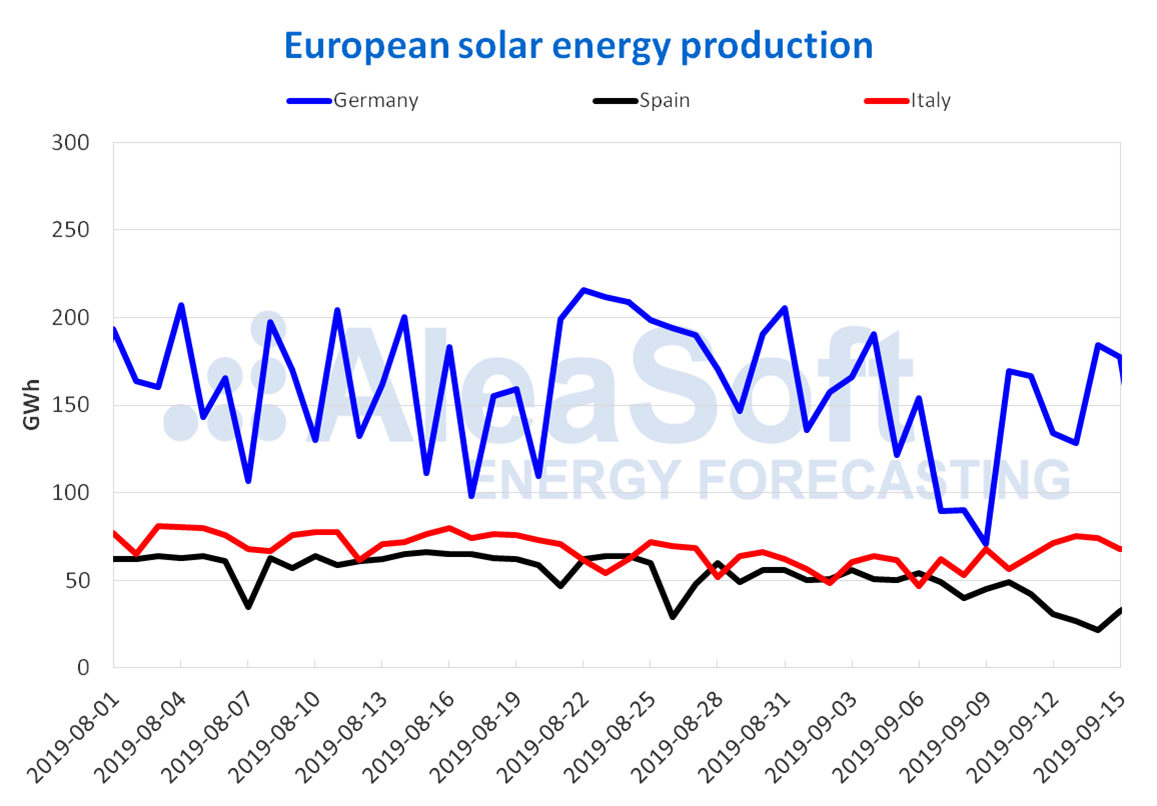