AleaSoft, September 5, 2019. In AleaSoft an analysis of the behaviour of the MIBEL electricity market in August was carried out, when the prices experienced a considerable decrease both with respect to July and to August of the previous year. The increase in solar energy production in Spain, both photovoltaic and solar thermal, was one of the factors that led to the fall in MIBEL prices.

The MIBEL electricity market in Spain and Portugal ended the month of August with an average price of €44.96/MWh. In contrast to the high prices at the end of August 2018, the lowest prices of the last quarter were reached last month. Such is the difference with respect to August 2018, that the -30% decrease represents the largest year‑on‑year decline so far this year. The coupling between the markets of Spain and Portugal was 99.6%, a 0.4% higher than that obtained in July.

In this descent, the Iberian market was accompanied by the rest of the main electricity markets in Europe. In this context, the EPEX SPOT market in France stands out with the lowest price in the continent in August, with €33.39/MWh and a -43% year‑on‑year decrease. The IPEX market remained at the top of the list of the highest priced markets and reached €49.54/MWh, with the lowest year‑on‑year decline among European markets, whose value was -27%. The rest of the markets remained during the past month at least -30% below the average price of August 2018, highlighting the decrease of -44% of the EPEX SPOT market in Belgium, which was the most remarkable.

The downward trend in CO2 emission rights led to the fall in prices of European electricity markets compared to August 2018. With respect to the month of July 2019, the lower demand for electricity due to the decline of labour at this stage of the summer also influenced. The decrease in the price in the Iberian market was also caused by the year‑on‑year increase in solar energy production, both photovoltaic and solar thermal, of 28% and 14% respectively, and by the significant fall in coal energy production, of -90 % in year-on-year terms. 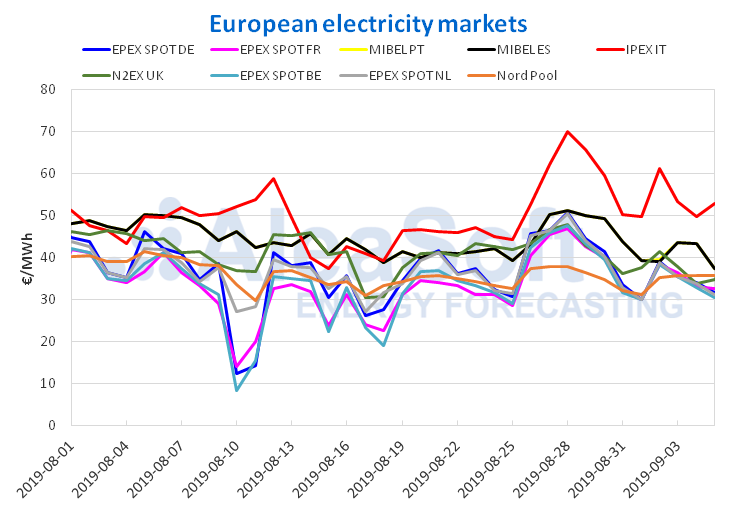 During the month of August, in the ICE market, the prices of Brent oil futures for the month of November ranged between $55.93/bbl and $61.32/bbl. The minimum value of the month just ended, reached at the settling of August 7, corresponds to the annual minimum so far. With regard to the average price value, in August it was $59.02/bbl, below the average value of $63.95/bbl obtained in July. The fluctuation of Brent oil prices in the month of August in the ICE market was marked by the trade dispute between China and the United States, the decline in production established by OPEC+ and the reduction of crude oil inventories of the United States, mainly.

In August, the prices of TTF gas futures in the ICE market for the month of October remained between €14.33/MWh, reached on August 8, and €11.95/MWh, reached on August 27. This last value represented not only the monthly minimum, but also the minimum of the last two years until September 2, when a settling price of €11.85/MWh was reached. The decrease in prices was more marked in the second half of August.

In the ICE market, the price of API 2 coal futures for the month of October was quoted down almost throughout the month of August. The settling price of August 30, $56.10/t, was $4.65/t lower than that of August 1, $60.75/t. The average price for August was $57.46/t and on the 28th, a price of $53.70/t was reached, which represents the minimum value reached this year. At the beginning of September, the prices are having an upward trend, settling at $57.75/t yesterday September 4.

In the EEX market, the price of the CO2 emission rights futures for the December 2019 reference contract experienced during the month of August a decrease from €29.45/t, reached on day 1, to €26.32/t, on day 30, going through a minimum value of €25.08/t on day 23. The downward trend of this month contrasts with the increases experienced during the month of July, when a historical maximum of €29.80/MWh was reached on July 23. Since September began, prices have been above €25/t. This market is heavily influenced by the negotiations that are taking place around Brexit.

During the month of August, in the EEX market in France and Germany there was also a tendency to decrease the prices of electricity futures corresponding to the last quarter of the year, reaching on August 27 a monthly minimum value of €50.14/MWh in France and €42.91/MWh in Germany.

In the EEX market in France and Germany, in August the price of electricity futures for the year 2020 showed the same downward behaviour observed in Spain and Portugal. Similarly, the settling price of the last session of the month decreased compared to the beginning of the month by €3.08/MWh in France and €3.61/MWh in Germany. 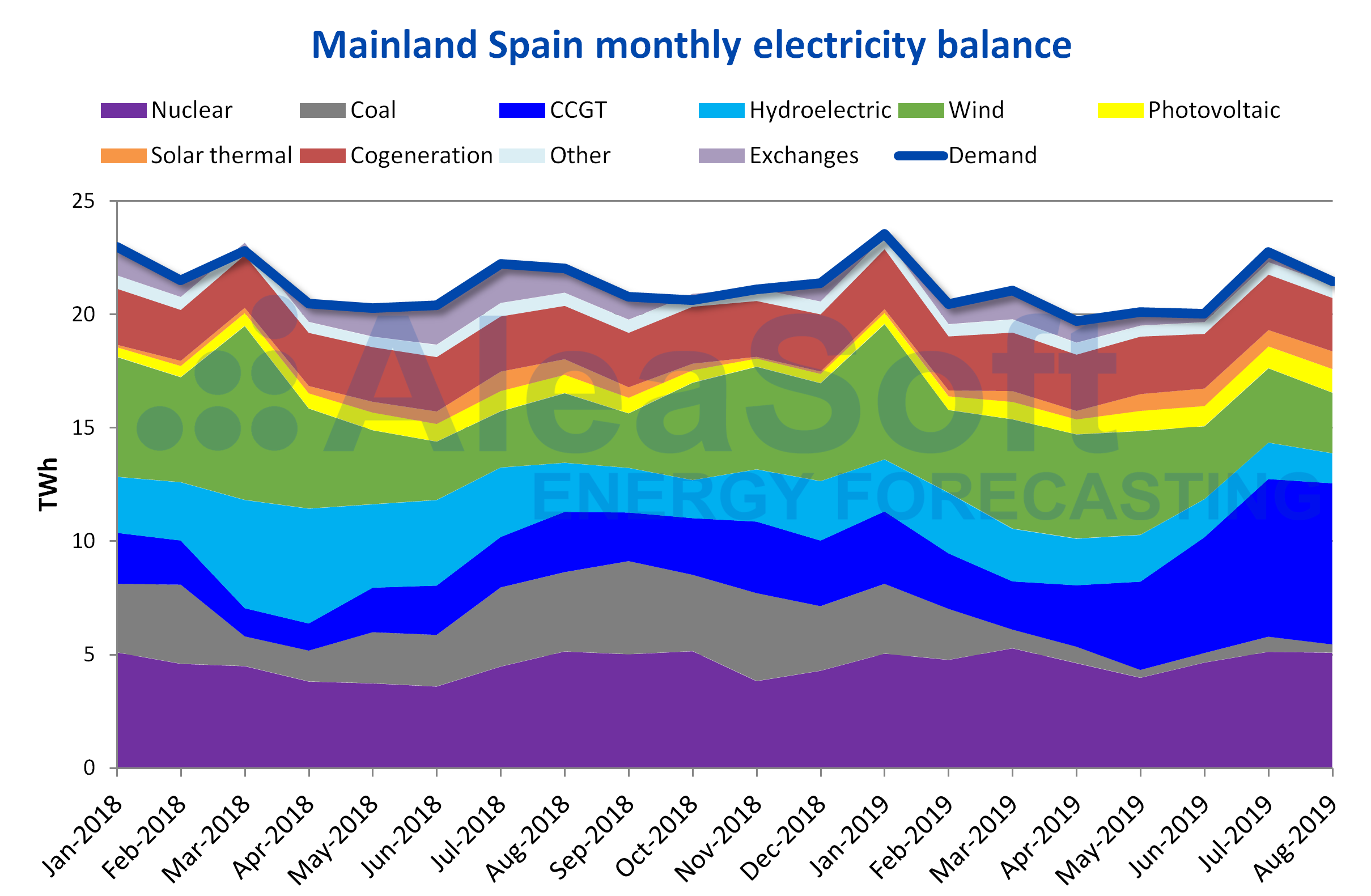 On the other hand, the electricity demand for the month of August decreased -2.9% year‑on‑year. According to REE data, when correcting the effects of temperature and labour, the 21 354 GWh registered during the month would be -4.2% below the electricity consumption of August 2018.

For the rest of the productions with renewable technologies, several falls were observed in the month just concluded. As regards the wind energy production, it suffered a year‑on‑year decrease of 13%. The hydroelectric energy production had its sixth consecutive month in decline, with a decrease compared to the same period of 2018, of -41%. In turn, the hydroelectric reserves in August were 23% below the level of August 2018, according to the August closing data of the Hydrological Bulletin, published by the Ministry for Ecological Transition.

The energy production with combined cycles during the month of August registered the highest value in the last nine years. With a growth of 167%, compared to August 2018, it occupied 33% of the energy mix of the last month and represented a 1.0% growth above its contribution to the monthly balance of July 2019.

The Vandellós II nuclear power plant had an unscheduled shutdown from Tuesday 27 to Friday 30 August, caused by the loss of a 400 kV power line due to weather conditions in the central area. August nuclear energy production was very similar to that of the same month of the previous year, decreasing only by -1.0%.